Whenever travellers abroad ask me how to begin planning their first trip to Canada, my answer is immediate: Start with checking out the best things to do in Montreal.

As much as I love spending time in other Canadian cities, none is quite as compelling, in my honest opinion, as Montreal.

Whether you’re visiting to sample best food in Canada (including a handful of our most famous dishes) or to catch a rare glimpse of European flair in North America, fill out your days with these best places to visit in Montreal…

Wander about in Old Montreal

Even if you only carve out one day in Montreal, strolling among the charms of Old Montreal isn’t an experience you’ll shake anytime soon.

Anyone who’s got a hankering for Europe can get their fill among 17th-century buildings that count hip restaurants, brasseries, art galleries, and souvenir shops among their tenants. 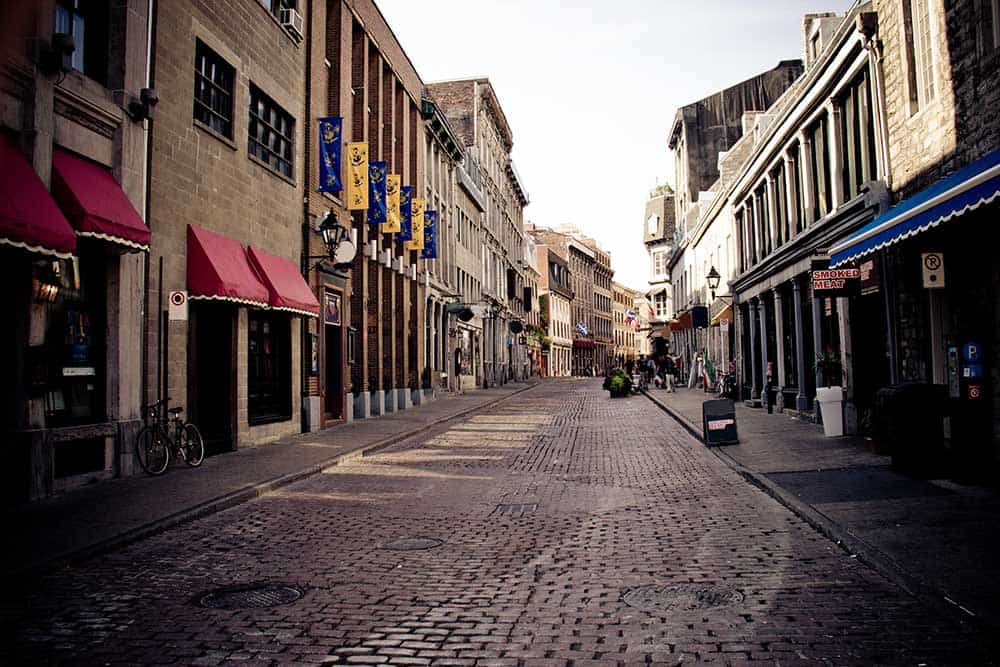 Start exploring Old Montreal along Rue St-Paul (Saint-Paul Street) where much the city’s most compelling old architecture radiates from (and, of course, some of the most Instagrammable places in Montreal!).

Be sure to leave some time to enjoy relaxing stroll along the Vieux-Port de Montréal and an ice cold bière artisanale in the always bustling Place Jacques-Cartier at the centre of the historic area.

Getting there: From Station Place-d’Armes, walk south along Rue Saint-Urbain towards the St. Lawrence River. Turn left at Rue St-Paul to pierce into the heart of Old Montreal.

Gaze upon the city from above at Mont-Royal

Plenty of greenery awaits in Canada’s second-biggest city, but no park in Montreal is more worthy of your attention than Mont-Royal.

Spreading out over 200 hectares and enjoying the highest point in Montreal, Mont-Royal present a relaxing escape from the bustle of the city below.

Besides strolling leisurely around Mont-Royal, don’t miss out on the chance to scope out the city from above. For the best views of downtown Montreal, head to the Belvédère Kondiaronk observation point near the centre of the park. Visit in autumn to catch Mont-Royal at its best under a lovely blanket of fall colours.

Getting there: There’s a handful of paths leading up to Mont-Royal from various spots in the city. The quickest and most direct route to the lookout point is from the trailhead at the northwestern edge of Rue Peel. Alternatively, bus 11 plies the route to the summit of Mont-Royal from Metro Mont-Royal and Côte-des-Neiges Road.

Chow down in Chinatown

So, maybe Montreal’s Chinatown won’t feed your cravings for East Asia as well as Old Montreal fulfills your European ones. That doesn’t mean you should miss out on one of the city’s most interesting cultural corners! 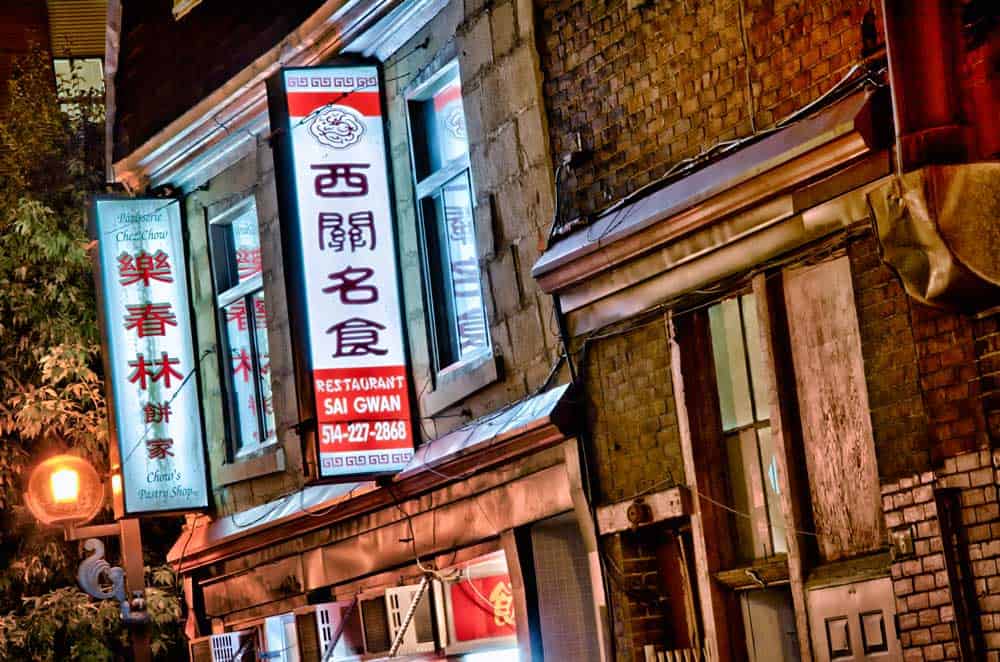 Compared even to other famous North American Chinatowns (like Toronto, San Francisco or Vancouver), Montreal’s is a tad cozy, stretching out little more than a block in either direction.

Of course, the best reason to visit Chinatown isn’t simply for sightseeing, but to get a taste of its Asian delights with French-Canadian twist. Here are a couple of my favourite places to eat in Chinatown:

Getting there: From Station Place-d’Armes, exit to Avenue Viger Ouest, crossing the street and turning right. At Boulevard St-Laurent, turn left and walk through the gate to Chinatown.

Delight in a Montreal smoked meat sandwich at Schwartz’s Deli

After an advance apology to all my vegan friends, it would be absolutely blasphemy to suggest visiting Quebec’s biggest city without trying a Montreal smoked meat sandwich.

One of the most famous Canadian foods, Montreal smoked meat is prepared much like the pastrami of New York only soaked to reduce the salt content and a smoked slightly longer to add flavour. 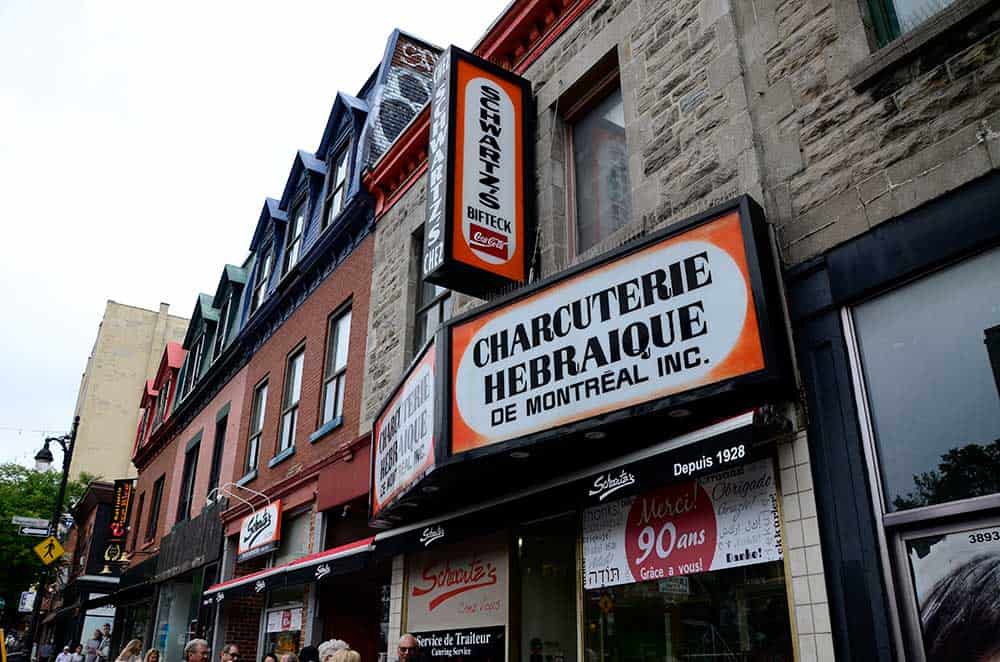 The most famous place to try Montreal smoked meat is Schwartz’s Deli on Boulevard St-Laurent. Their brisket served on rye bread with Kosher pickles and mustard is an absolute gem that’ll leave your mouth-watering for days to come.

Don’t have the patience to wait in the round-the-clock, round-the-corner line-up at Schwarz’s Deli? Try out Lester’s Deli in Outremont, a small family-run diner.

Getting there: From Station Sherbrooke, exit to Rue Saint-Denis, turning right to head north. At Avenue des Pins Est, hang a left. Walk about six blocks west and turn right onto Boulevard St-Laurent. The deli is about two blocks up to your right.

Watch a Canadiens game at the Bell Centre

As a fourth generation Toronto Maple Leafs fan, I can picture my grandfather and great-grandfather rolling in their graves at this suggestion.

I can’t, however, with good conscience not recommend immersing yourself into the chaos of a Montreal Canadiens game while visiting the city. 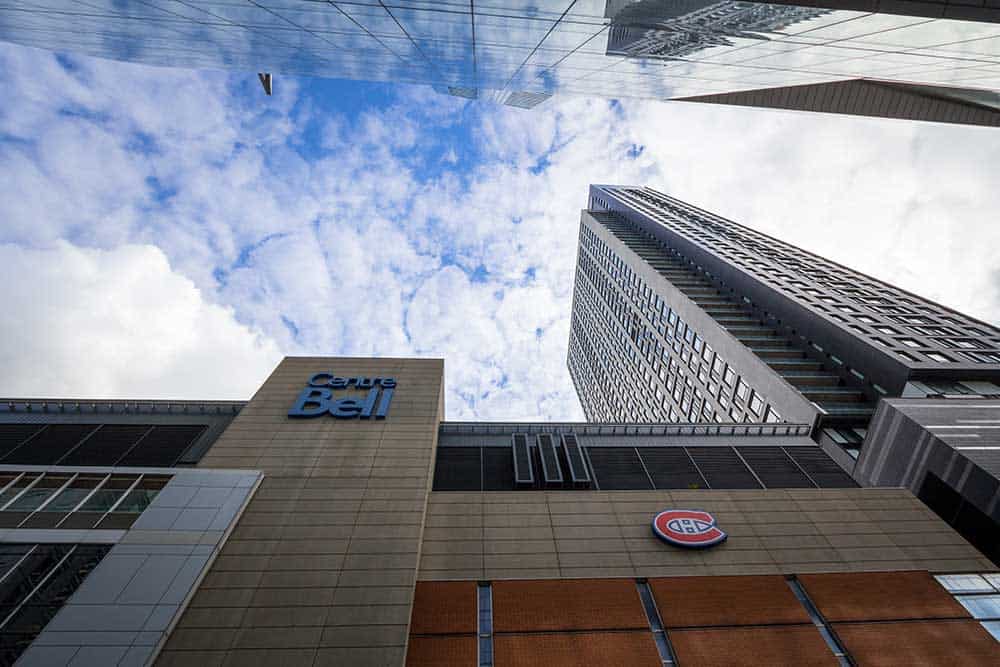 I’m sure you all know that hockey is like a religion in Canada. And alongside Toronto, Montreal is sacred ground for hockey fans.

Witnessing a Montreal Canadiens game firsthand will forever shake that crazy stereotype that Canadians are always polite & mild-mannered. (In fact, you might discover quite the opposite!)

Ready to embrace the insanity of hockey in Canada? Check availability for Montreal Canadiens tickets here.

Getting there: The Bell Centre is connected to Station Lucien-L’Allier in downtown on Line 2 of the Metro.

On my many visits to Montreal, I try to venture off into unfamiliar parts of the city. On my last trip, I found myself wandering into Mile End, a gem of a neighbourhood that’s one of the chillest places to hang out in Montreal. 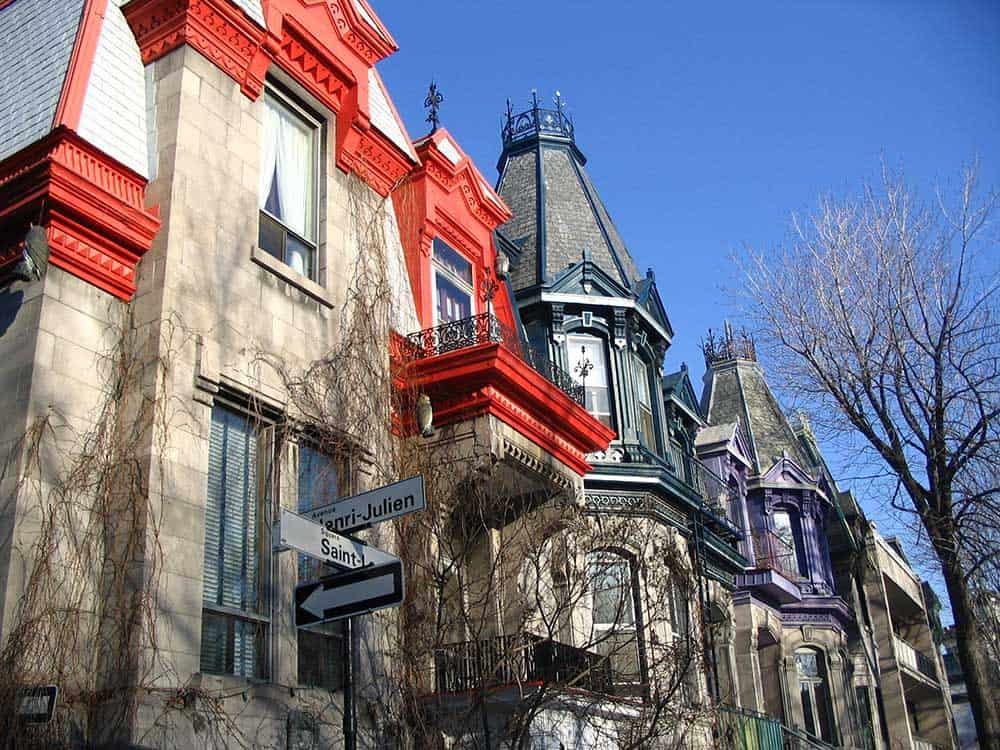 Plying the streets of Mile End, a small enclave of the diverse Le-Plateau-Mont-Royal, you’re met with a multitude of hip restaurants, vintage record shops, relaxed cafés, and brasseries squeezing out some of Quebec’s best pints.

At night it’s a whole different story in Mile End with trendy cocktail bars and live bands setting the scene.

Getting there: On the Montreal Metro, zip over to Station Laurier. Exit onto Avenue Laurier Est, following it west towards the heart of Le Plateau-Mont-Royal and Mile End.

Munch on a Montreal-style bagel at St-Viateur

Like Montreal smoked meat, eating a traditional Montreal-style bagel should be high on your list of things to do in Montreal.

Fighting on behalf of my fellow countrymen, I’d have to say that bagels in Montreal trump even their still delicious counterparts in New York City, the other Mecca of the bagel universe.

(This New York vs Montreal food battle seems to be a thing, no?) 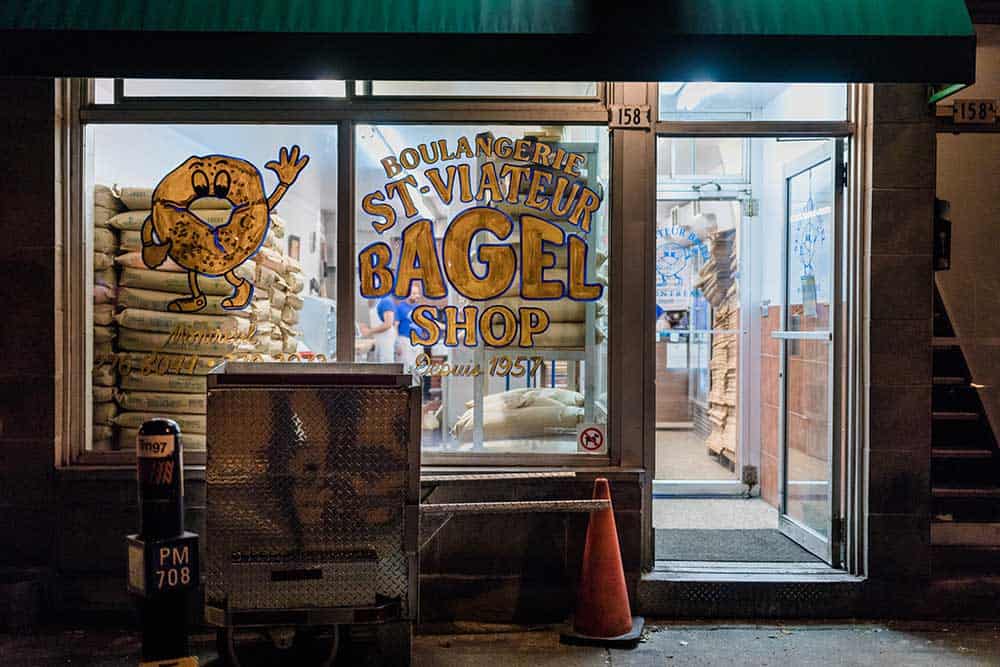 Both New-York-style and Montreal-style bagels are boiled in water before getting baked.

The biggest difference—and the critical factor in the taste—is that the bakers here immerse their bagels in water sweetened with honey and bake them in a wood-burning oven for a sweeter taste and crispier texture.

To drool over the best bagels in Montreal, head to the famous St-Viateur Bagel Shop (263 Rue Saint-Viateur Ouest) or, alternatively, Fairmount (74 Avenue Fairmount Ouest) in Mile End. Both shops are open 24/7.

Getting there: From Station Laurier, follow Avenue Laurier Est westward to Avenue du Parc. Turn right and follow the street two blocks north to Avenue Saint-Viateur. Cross the street and hang a right. You’ll see the bagel shop ahead to your left.

Where to stay in Montreal: The best hotels for sightseeing

Although it’s one of the biggest cities in Canada,  figuring out where to stay in Montreal isn’t such a large challenge. Most travellers would do well to settle within the  downtown core.

The areas in & around Old Montreal, Quartier des Spectacles, and the central business district are particularly appealing for visitors thanks to their proximity to the top points of interest in Montreal. Here are a few hotels to start your accommodations search…

More places to see in Canada