If you find yourself roaming around Kansai, don’t miss a chance to delve into all the best things to do in Nara.

Sorting through the top tourist attractions in Nara, you’ll explore mystical temples, mingle with sacred deer, and, most of all, enjoy an escape from the bustle of urban Japan in Nara’s blissful nature.

Not sure where to go in Nara? Plan your trip like a pro with this Nara attractions guide featuring the best places to visit in Nara, Japan…

What to do in Nara

Feed the deer at Nara Park

If you’re struggling to figure what to do in Nara, start with a trip to Nara Park.

This park in the centre of Nara is a sprawling area of hills, forests, and ponds with lots of meandering paths. Most surprisingly, you’ll also find plenty of deer. (Read: thousands of deer!) 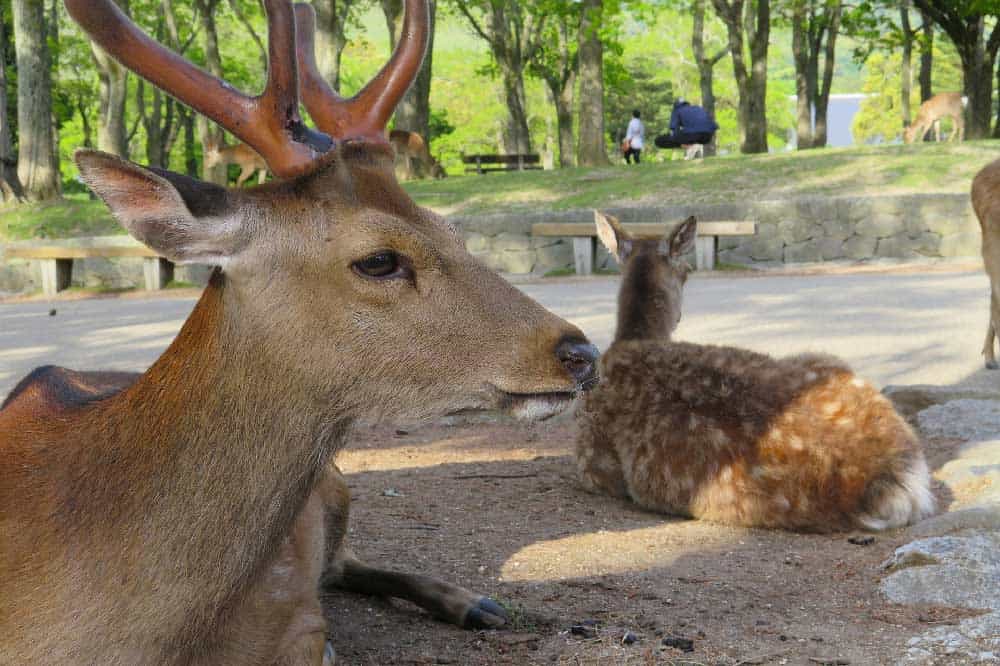 Nara Park is well-known in Japan for the free-roaming deer. The deer here aren’t your average run-of-the-mill whitetails: They’re considered Shinto messengers from God and are revered by locals and foreigners alike. In fact, as soon as you get close, you’ll quickly discover that hanging around these mystical animals is one of the most unique experiences in Japan!

As you walk through the park, you’ll see them grazing lazily in seemingly every direction. (Occasionally, you’ll even scope out the deer roaming various other areas of the city.)

Visitors are welcome to feed the deer. There are even vendors throughout the park that sell treats (shika-senbei) for them. Just be cautious as they are wild animals and can sometimes get unintentionally aggressive when they’re peckish.

While the park is lovely, the location is the main reason to make it your first stop, whether you’ve got just one day in Nara or few. Several of the next few Nara attractions are close by, making it the perfect place to launch your itinerary.

Note that if you’re visiting Nara on a day trip, you can also get off the train near the park entrance.

Marvel at the largest bronze Buddha statue at Todai-ji Temple

Nara is home to some of the oldest temples and shrines in Japan, including Todai-ji Temple. Especially if you’re travelling to Japan for the first time,

Todai-ji Temple is a necessary stop due to the sheer size of its giant bronze Buddha. The temple is located in the northeastern part of Nara Park. 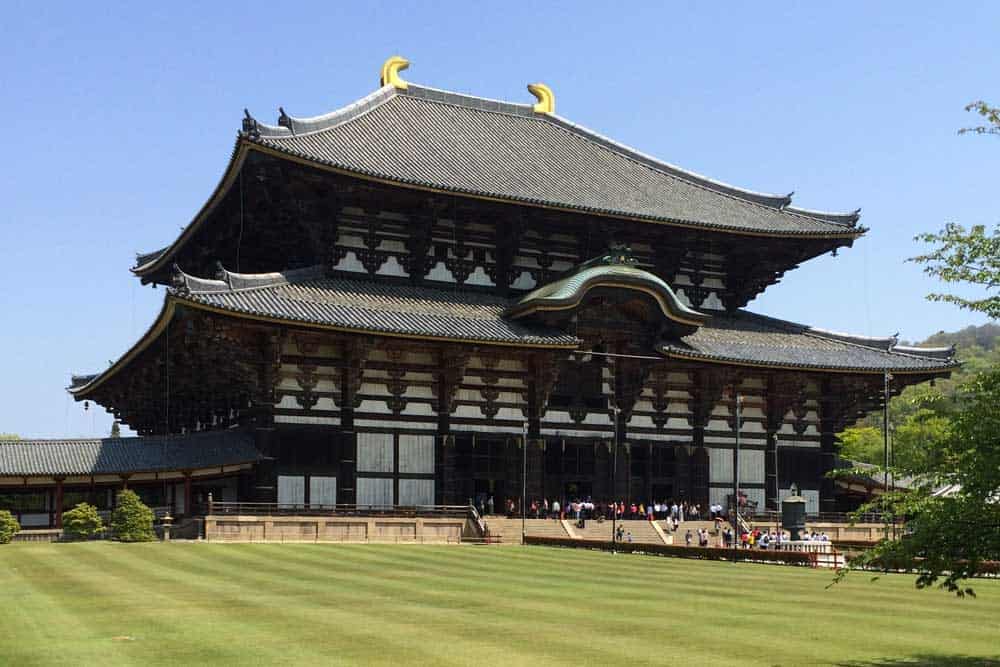 Todai-ji, constructed in 752, is a complex containing many buildings.

However, the main attraction is the Great Buddha Hall (Daibutsuden), the world’s largest wooden building, housing the massive relic. The 16-metre-tall statue is the largest bronze depiction of Buddha in the world.

The entrance to the temple includes the large Nandaimon Gate, a wooden gate flanked by two statues. As you wander about Todai-ji, you’ll also likely encounter even more deer!

Explore the maze of paths around Kasuga-Taisha Shrine

The Kasuga-Taisha Shrine is one of the most visited Nara points of interest and another destination in the Nara Park area.

Established when Nara became the capital of Japan, Kasuga-Taisha Shrine is dedicated to the deity responsible for protecting the city. 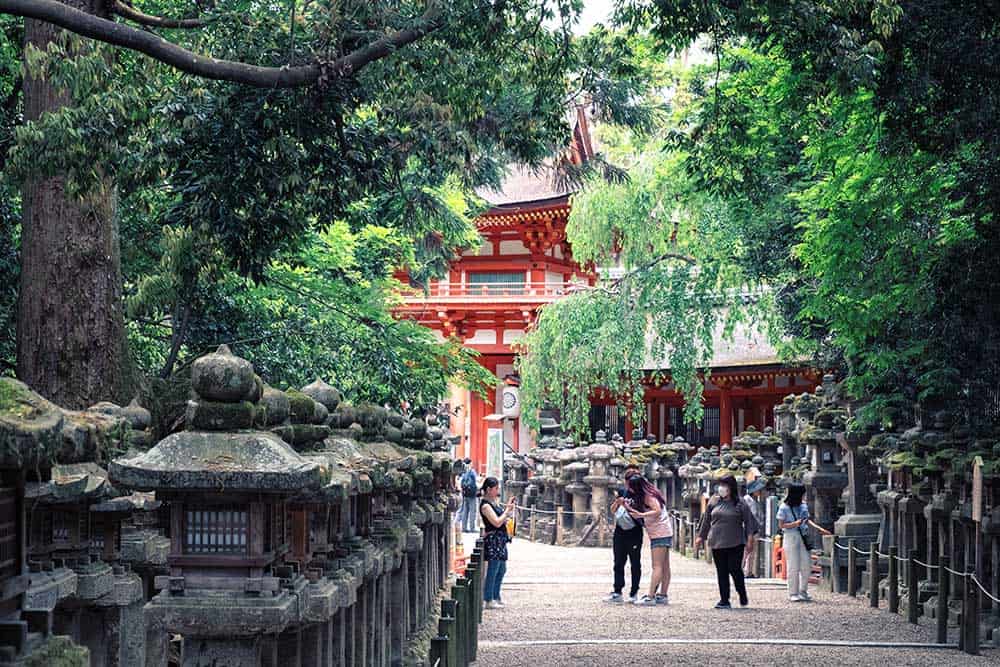 You should take your time walking around the Kasuga-Taisha Shrine complex. The buildings are nestled in a forest of pathways, trees, and stone lanterns. The shrine is, in fact, famous for its lanterns that have been donated by worshippers over the years.

You’ll also continue to encounter the free-roaming deer. It’s a good idea to get used to these animals and treat them with respect. As messengers of God, they’re considered an important part of the city even when they aggressively seek handouts from tourists.

The shrine is open about two hours earlier compared to the Todai-ji Temple and the garden.

If possible, try to make this destination your first stop, especially if you’re on a day trip from Osaka, to give you more time to explore each sight.

Opened in 1889, the Nara National Museum displays one of the biggest Buddhist art collections in Japan is among the most interesting places to see in Nara for art & culture lovers alike. 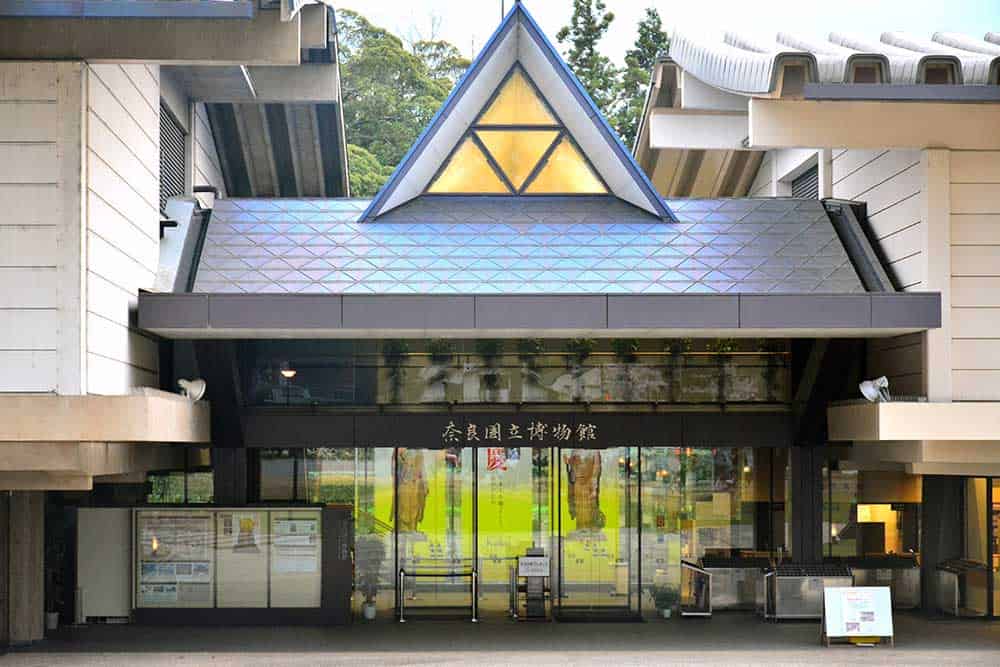 The art museum is split into two wings, both displaying the museum’s permanent collection of Buddhist sculptures, paintings, and other relics mostly from Japanese Buddhism. The newer wing also hosts seasonal temporary exhibitions.

The Nara National Museum is open daily from 9:30am to 5:00pm and is closed on Mondays. Admission to both wings is just ¥700.

Once the aristocratic Fujiwara clan’s family temple, Kofuku-ji Temple is one of the finest temples from Nara’s capital city era, starting way back in 710.

Although the temple complex is a little more subdued these days, at its peak Kofuku-ji Temple comprised over 150 buildings. The remaining buildings are important to Japanese history and among the top landmarks in Nara for travellers to check out. 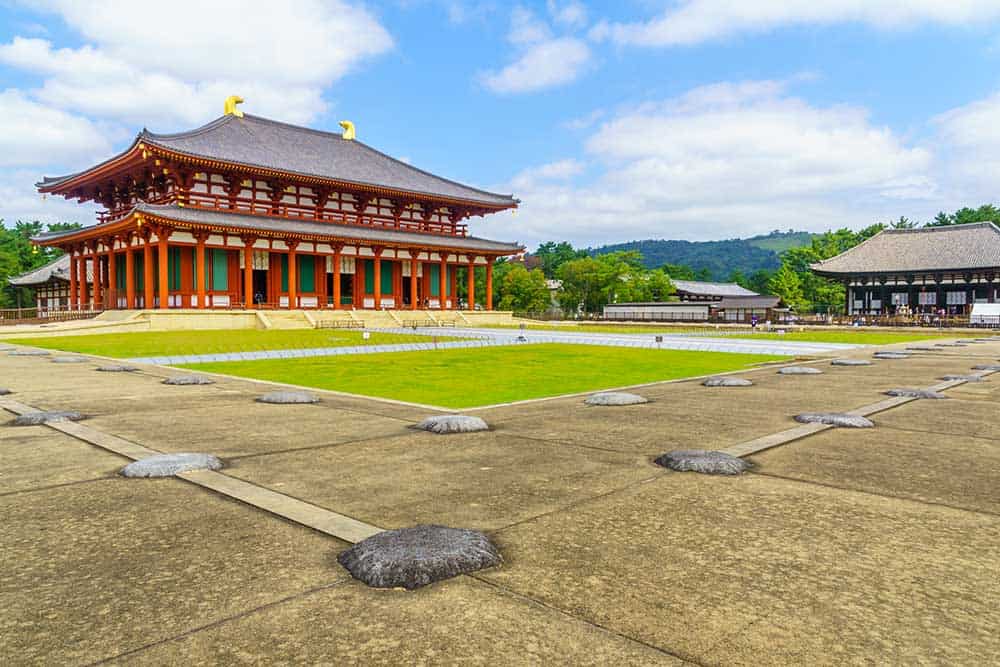 The most impressive structure here is the 50-metre-high five-storied pagoda. Next to To-ji Temple in nearby Kyoto, it’s the second-tallest wooden pagoda in Japan and one of the handsomest in country.

Wandering around the temple grounds is free for visitors, but there’s a small fee for entering each of the buildings including the Central Golden Hall (¥500), National Treasure Museum (¥700), and Eastern Golden Hall (¥300).

Dazzle at the complex of Yakushi-ji Temple

Built by Emperor Tenmu in the late-7th century, Yakushi-ji Temple is one of the oldest temples in Japan and one of the most stately things to see in Nara. 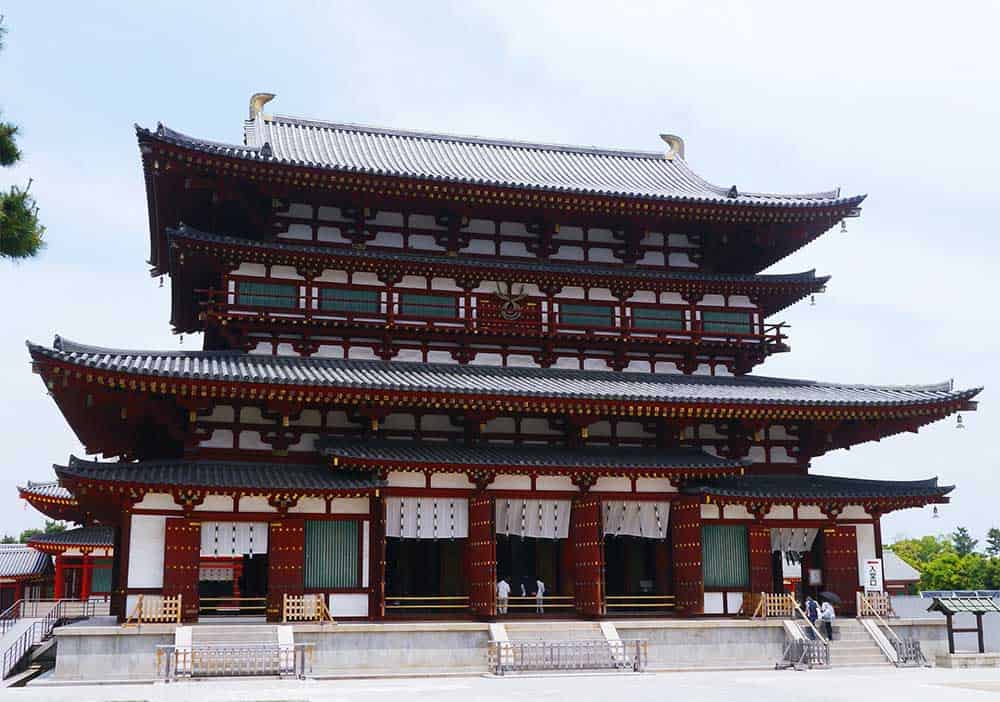 Walking around the temple grounds, you’ll be immediately struck by its symmetry. Whereas many Japanese temples have pagodas of offsetting sizes or distances from each other, the twin pagodas to either side of the main hall form a perfect balance together.

Like many temples around Japan, the main hall of Yakushi-ji is a reconstruction, dating back to the 1970s. Make sure you carve out some time to pop inside to scope out the Yakushi trinity, one of Japanese Buddhism’s most impressive masterpieces.

Breathe the scents of fragrant flowers in Isui-en Garden

Japanese gardens are so popular that people recreate them in other parts of the world. Isui-en Garden is a great example of Japan’s traditional botanical flare and one of the top choices for what to see in Nara. 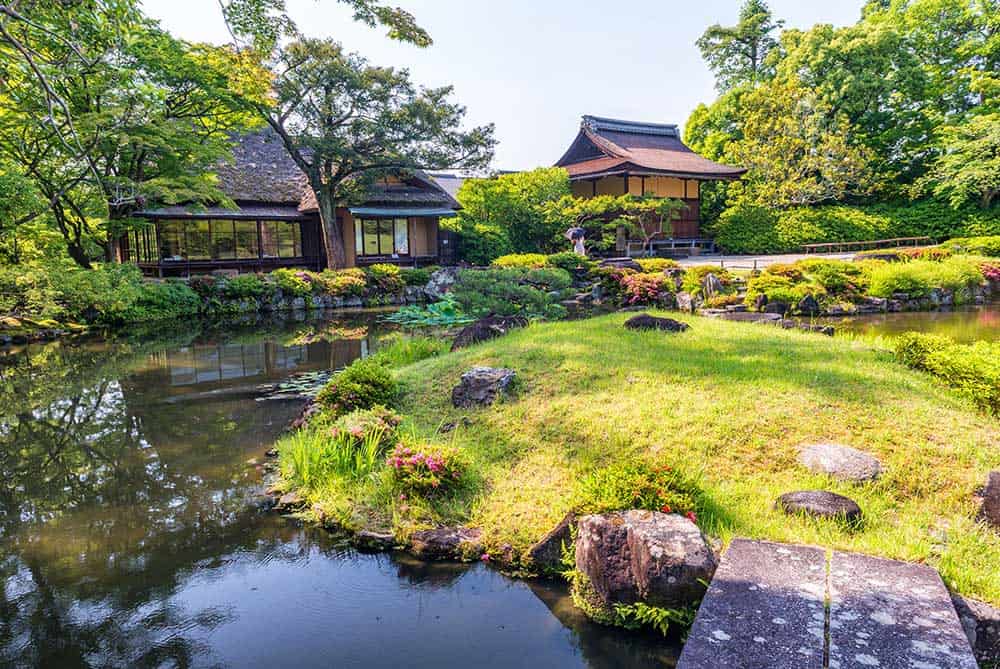 It’s also inside Nara Park, making it an easy attraction to check out. You can even see the top of Todai-ji through the trees.

The garden is expansive. It includes well-manicured lawns and ponds containing flowers, trees, and topiary of all sizes and colours. As you walk the paths, take short breaks to smell the flowers or check out the native plants.

The garden is divided into two sections (a front and a rear garden) and each has its own pagoda while a number of tea houses are scattered throughout.

To really appreciate the spectacular swirl of colours, visit in the fall when you’ll see the most diversity.

Smell the flowers at Yoshiki-en Garden

If you visit the park on a particularly crowded day, you may catch a break at Yoshiki-en Garden. This garden is located just south of Isui-en Garden in Nara Park. It’s also frequently overlooked by visitors. 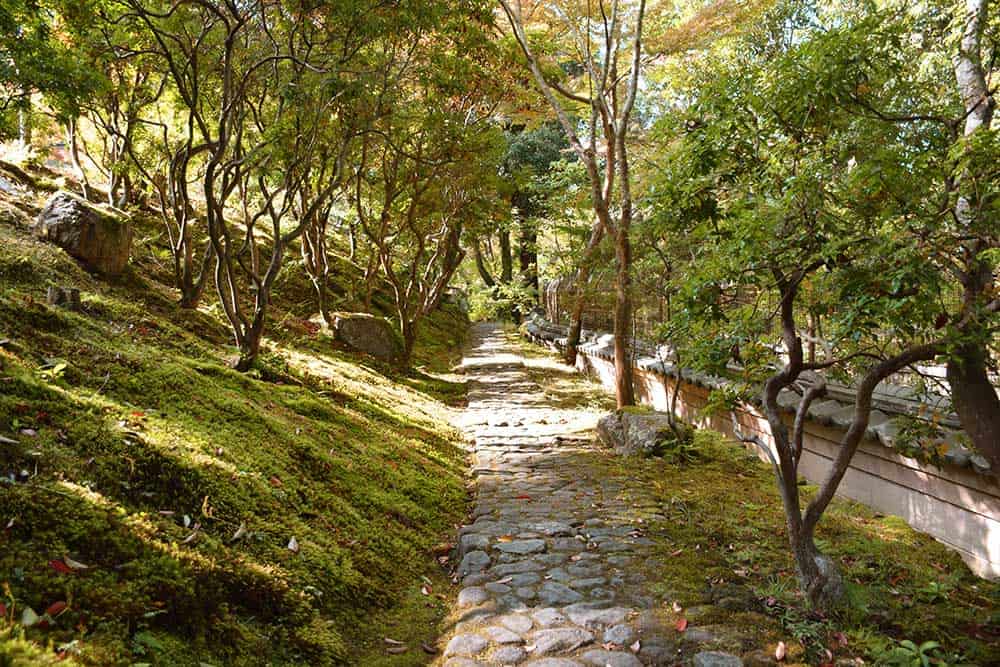 The smaller garden includes a teahouse with a thatched roof and entrance is free. While the garden is smaller, it still offers a chance to enjoy the outdoors and view the unique style of Japanese gardens.

The garden, broken into three parts (a pond garden, moss garden, and tea ceremony garden) doesn’t have a lot of topiaries and carefully trimmed shrubs.

It’s simply a quiet, serene garden that offers a bit of a break from the busier parts of Nara Park.

Nara is full of history. And while it may not contain more temples & shrines than Kyoto or Osaka, it’s got a few of the oldest temples including Horyu-ji Temple. 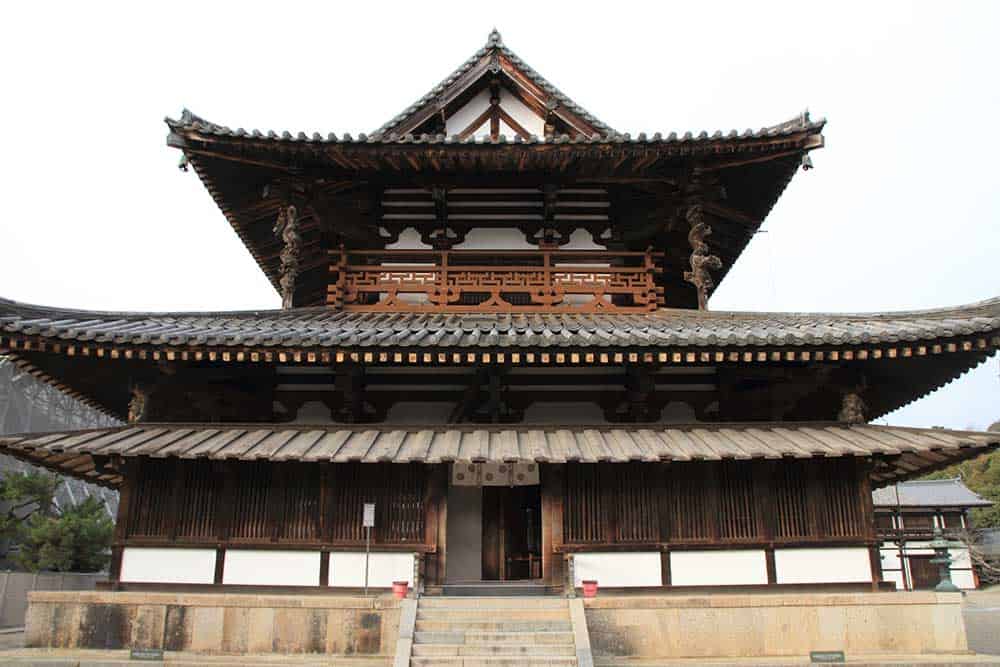 Horyu-ji isn’t in Nara Park, but it’s still just a short walk from JR Horyu-ji Station. The compound includes various temple buildings and a large museum. You can check out one of the largest collections of Buddhist images.

However, the main attraction is the main temple hall. It’s the oldest wooden building in the world. It was built around 600 CE and then rebuilt in the early 700s.

Designated a World Heritage Site in 1993, it’s also a cool-looking building and a wonderful example of the typical architecture used for these ancient temples.

A “kofun” is an ancient grave. These tombs are found throughout the country. They are keyhole-shaped mounds that were mostly created between 300 and 700 CE.

The largest kofun is just outside of Osaka. However, there are still some great tombs to explore around the Nara area. 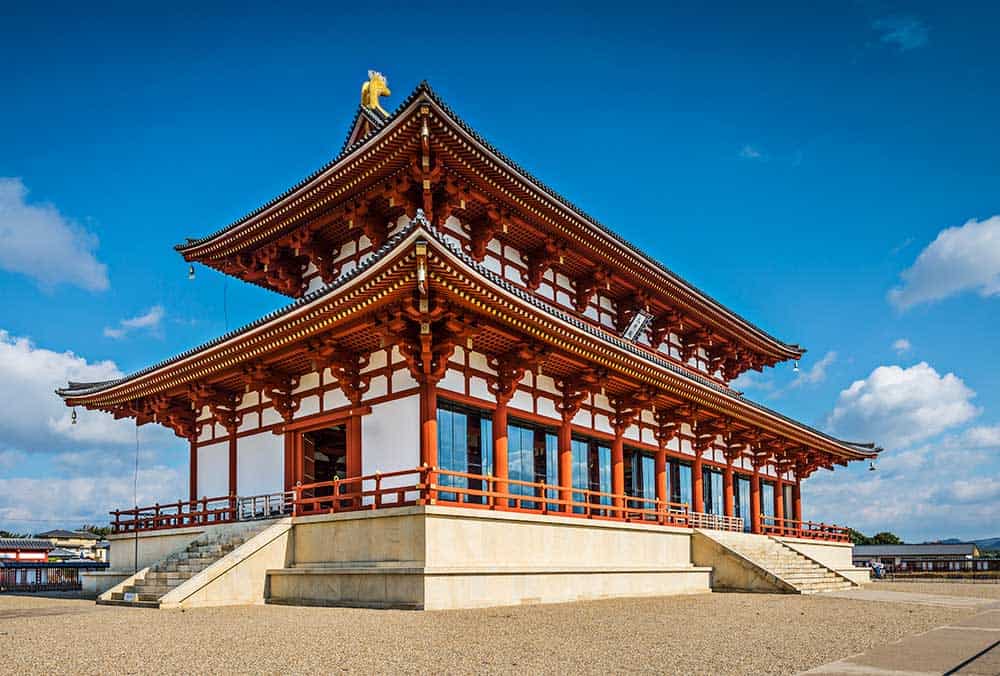 In Nara, you’ll find the Gosashi tomb, which is the resting place of the famous Empress Jingu. She was a regent who ruled Japan in the year 201. The tomb also contains Haniwa terracotta figures.

You can find the tomb by visiting Heijo Palace, one of the UNESCO World Heritage Sites in Nara. The palace itself is also a fun destination. It was the imperial residence when Nara was still the capital of Japan.

Shop, eat, and drink in the Naramachi shopping district

One of the best places to go in Nara for eating, drinking, and shopping is the Naramachi shopping district. This neighbourhood separates the park area from the rest of the city and includes a dense collection of shops, restaurants, homes, and small cafes. 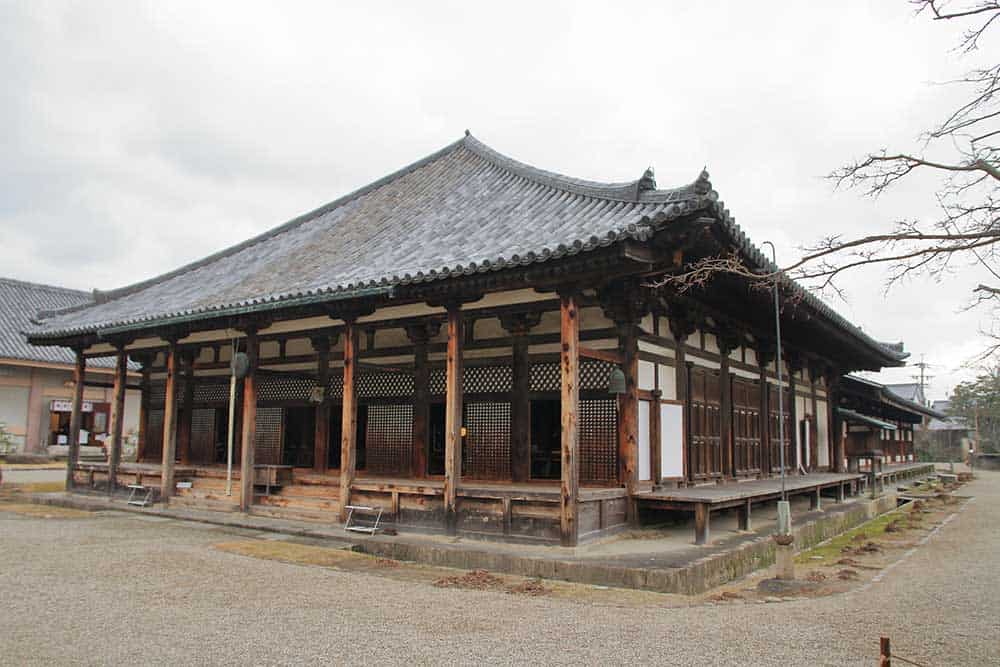 Walking the streets of Naramachi makes you feel as if you are stepping back in time to the early days of Japan. There’s still plenty of modern details, however, to remind you of the present, including the sight of tourists walking around with cameras.

It’s a busy area and the best spot to go shopping and grab a bite before retiring back to your hotel.

If you’re a night owl, you’ll find a variety of late-night restaurants and bars in the shopping district. There are even a few that are open 24-hours.

Where to stay in Nara for sightseeing

Thanks to its relatively compact size, choosing where to stay in Nara is simple. For travellers looking to take on the top points of interest in Nara, the areas around JR Nara Station, Kintetsu Nara Station, and Nara Park are the best areas to stay.