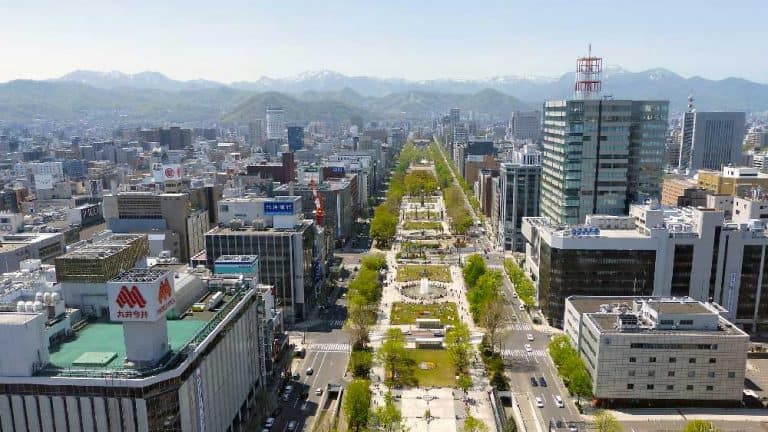 Only squeezed out one week in Hokkaido? Digging into the best things to do in Sapporo should be high on your travel wishlist!

Sapporo is the lesser-known capital of Japan’s northernmost island of Hokkaido. It’s the 5th-largest city in Japan, but it’s far younger than other popular Japanese travel destinations. Sapporo tallies only 150 years of history.

That doesn’t mean the top tourist attractions in Sapporo are any less compelling. In Sapporo, you’ll discover Japan’s surprising penchant for brewing beer. Or, visiting in the colder months, you’ll watch a winter wonderland unfold before your eyes.

Not sure where to go in Sapporo? Plan your trip to Hokkaido’s capital with this guide to the the best places to visit Sapporo…

What to see & do in Sapporo

Even with only one day in Sapporo, don’t miss a chance to scope out the city from above at Mount Moiwa.

Mount Moiwa looms east of the city centre. At 531 metres above sea level, the mountain unleashes spectacular 360-degree views. From the top, you’ll see most of Sapporo, the Mashike Mountains, and Ishikari Bay.

Alongside Hakodate, Nagasaki & Kobe, Mount Moiwa offers the finest night views in Japan. Visiting in the evening is an absolute must on your quest for what to do in Sapporo. 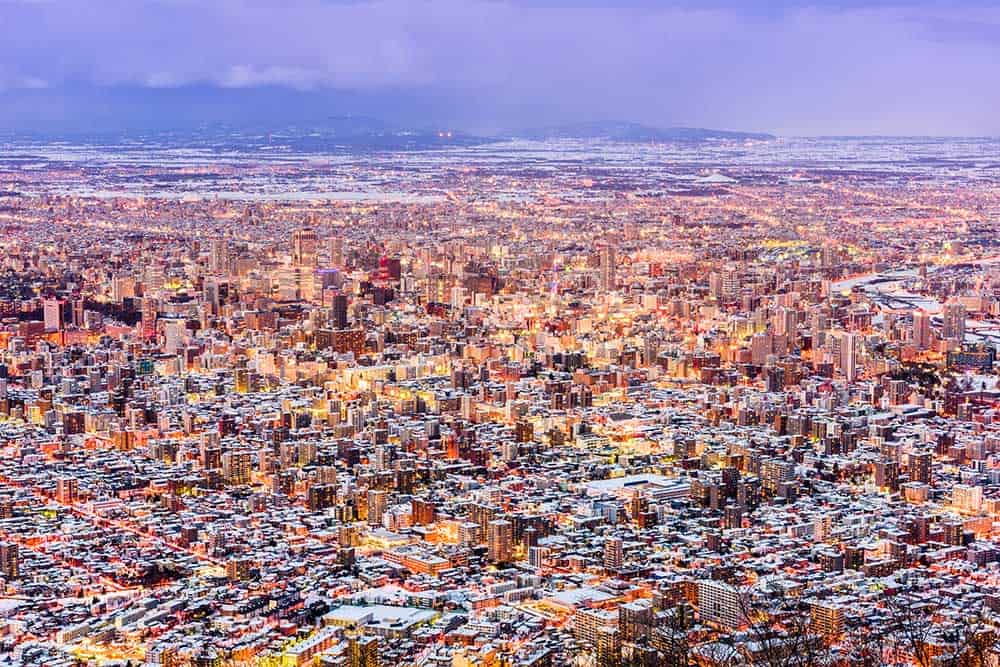 Done breathing in the unforgettable panoramas from the observatory platform? Explore Mt. Moiwa’s other attractions.

Browse through souvenir shops or gaze at the sky at the planetarium. You can also enjoy a meal to stunning city views at the peak’s romantic French restaurant.

Getting there: One of the best parts about Mt. Moiwa is getting there. From Susukino in central Sapporo, take a local tram to the Ropeway Iriguchi Stop. From here either walk or hop on the shuttle bus to Moiwa Sanroku Station. Proceed up Mt. Moiwa on the Moiwa-yama Ropeway and the cable car from Moiwa Chufuku. They’ll take you to the observation platform at the summit.

Sure, it might lack the excitement of Kabukicho in Tokyo or Dotonbori in Osaka. But Japan’s northernmost entertainment district of Susukino proves Sapporo is anything but boring.

Like entertainment areas in any modern Japanese city, Susukino dashes among the coolest places to see in Sapporo. The district flashes with a splattering of neon signs. The gentle glows light the way for a slew of karaoke bars and pachinko parlours. Among them, you’ll also find some of the city’s best restaurants. 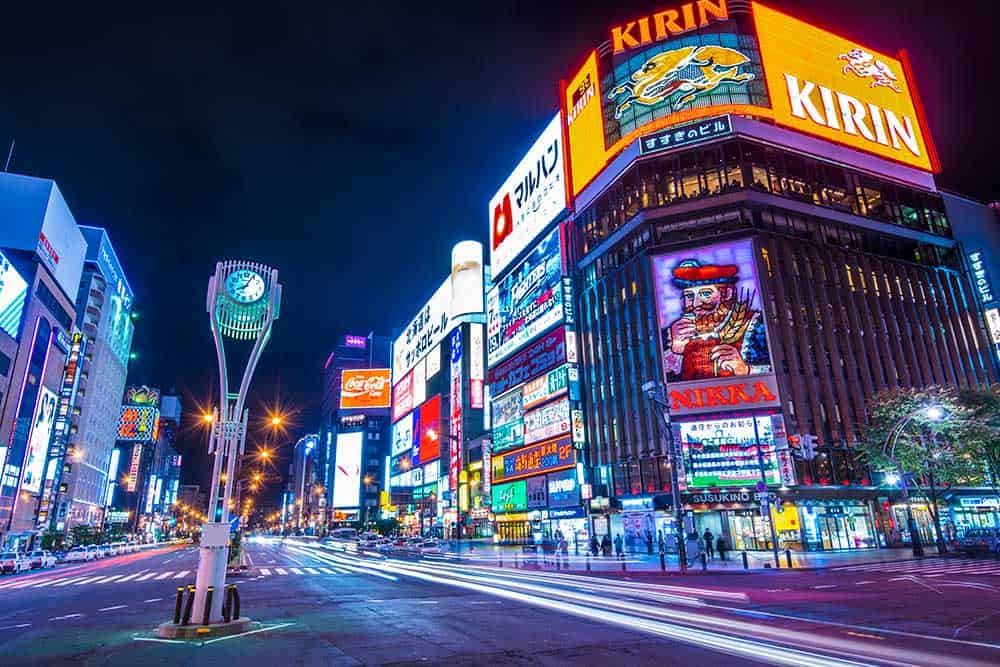 When you’re not down for a wild night on the town, settle into one of Susukino most popular corners, Ramen Yokocho.

This narrow alleyway is one of the top places to go in Sapporo. It hosts the city’s most popular food, miso ramen. The dish is one of the best things to eat in Sapporo and near the top of the list of must-try Japanese foods.

Getting there: The city’s most exciting district lies directly in the centre. It’s accessible both by foot and via Sapporo’s public transportation at Susukino Station.

At first glance, it might not look like one of the best city parks in Japan. But there’s a whole lot going for Odori Park when planning out what to do in Sapporo.

This long & narrow stretch occupies the space between two lanes of Odori, one of the main drags of central Sapporo. 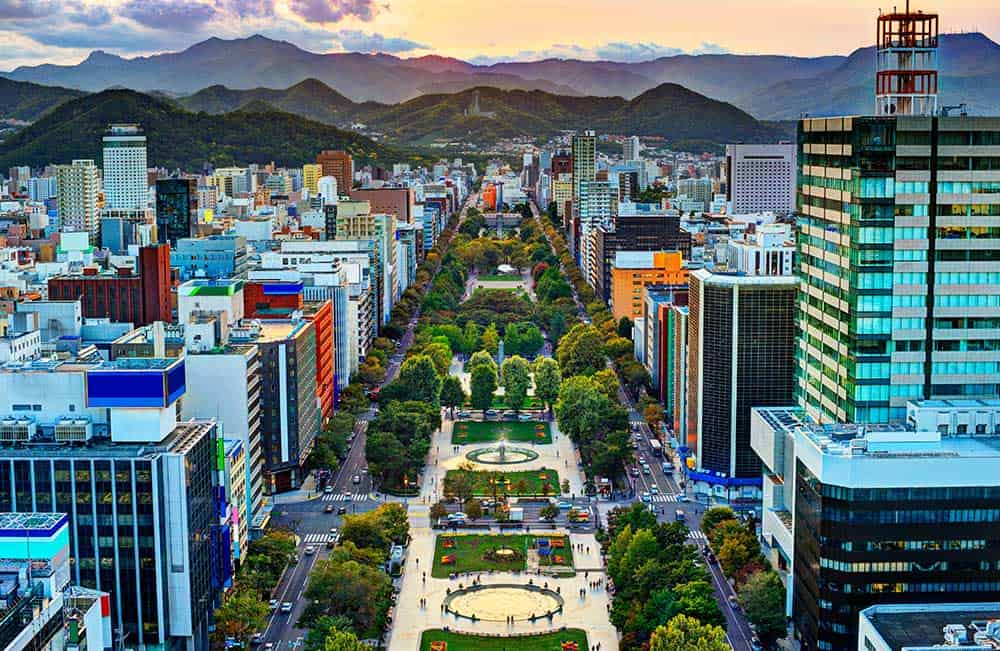 Odori Park is a favourite recreational spot for Sapporites. On any visit, you’ll see locals walking about and relaxing. The park also hosts several popular festivals throughout the year.

Most famous is the Sapporo Snow Festival. This 7-day annual affair sees Odori Park explode into a winter wonderland. During the festival, the park abounds with snow & ice sculptures. If you’re visiting in winter, the festival tops the list of what to see in Sapporo!

In autumn, another one of the best times to visit Hokkaido, Odori Park erupts into its fall shades. It’s a scene unlike any other in the city!

Getting there: Odori Station lies at the eastern fringe of the parkland. From Sapporo Station, Odori Park is a 15-minute walk south.

Already revelled in the comfort of Odori Park? Get a glimpse of it (and the rest of central Sapporo) from above at the city’s most famous landmark, Sapporo TV Tower.

Rising 147.2 metres, Sapporo TV Tower is one of the tallest buildings in the capital of Hokkaido. It supplies some of the city’s finest views. For high-flyin’ photography, it’s one of the best places to visit in Sapporo. 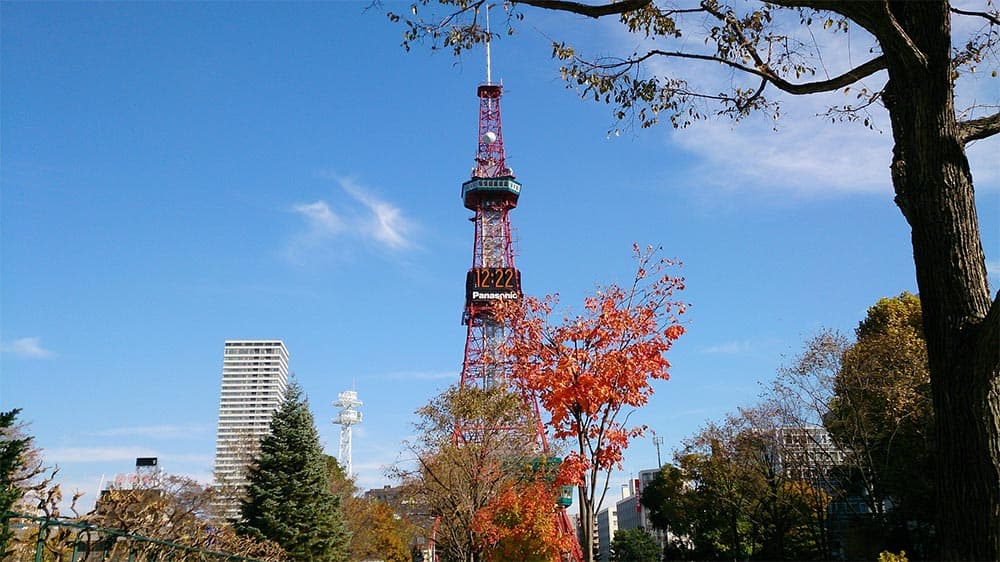 To get the full experience, scoot up to the observation deck. It sits at the 90-metre level. From it, you’ll enjoy 360-degree views over Sapporo—and even as far as the Sea of Japan and Ishikari Plain.

The Sapporo TV Tower is also connected subterraneously to Aurora Town. This 312-metre-long underground shopping street is jammed with shops, restaurants, and cafés.

Getting there: From Odori Station on the Namboku, Toho, and Tozai Lines, use Exit 27. You’ll emerge at the tower.

Think that drinking great beer is confined to places like Germany or Czech Republic? Prepare to experience a revelation at the Sapporo Beer Museum.

Hokkaido’s beer industry sports a history as old as the city itself. And it all started with the Hokkaidan capital’s namesake beer, Sapporo. Since its first appearance in 1877, the brand has grown into one of the world’s most popular brews. 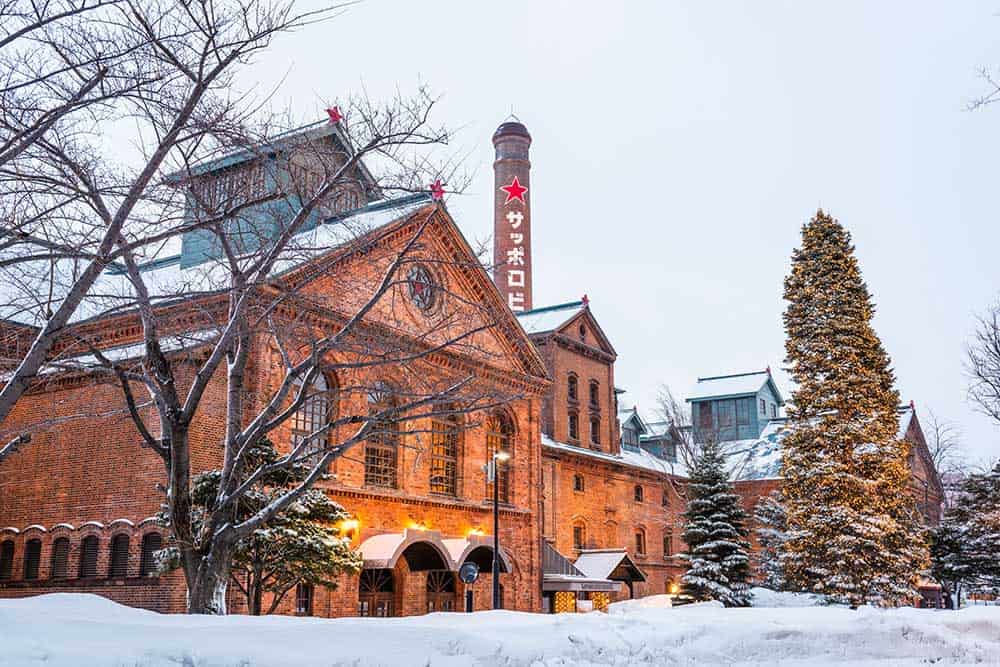 The Sapporo Beer Museum walks visitors through the history of Japanese beer industry. It starts from its humble beginnings in Hokkaido, moving through how Japan’s favourite beer is brewed today.

Beyond beer history, the museum is home to the Sapporo Beer Garden. The popular venue assembles several restaurants & beer halls, inspired by their Bavarian forefathers. For beer lovers, it’s one of the top points of interest in Sapporo.

Enjoy all-you-can-drink beer (responsibly, of course) and all-you-can-eat BBQ lamb to soak up the suds.

Getting there: The easiest way to access the museum is via the Loop 88 Factory Line bus, running from Odori or Sapporo Station. From the metro, it’s a 15-minute walk to the museum. The closest station is Higashi-kuyakusho-mae (Toho Line). It’s a 25-minute ride from Sapporo Station via Kita-hachijo Dori.

This famous historical building sports a late-19th century clock from Boston. Both the building & clock date back to the founding of Sapporo. At that time, the clock tower acted as an exam hall for the Sapporo Agricultural College. 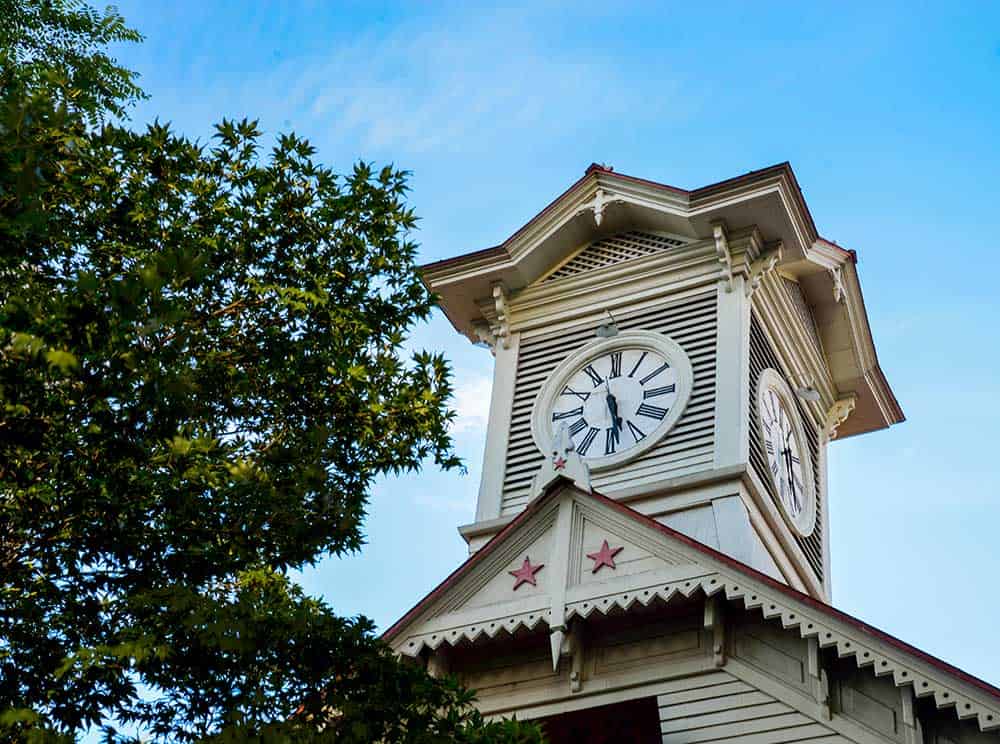 Sapporo Clock Tower is one of the most-visited attractions in Sapporo. Even so, it’s more interesting for history buffs than casual travellers.

Curious visitors should spend time plying through the first-museum. You’ll learn about the tower’s history and of Sapporo’s early days. Follow your lesson up with a visit to the clock exhibition and ceremony hall on the second floor.

While sashaying about Susukino, don’t miss out Tanukikoji Shopping Arcade. This covered shopping street is about one kilometre long. The stretch sports about two hundred small shops, bars, and restaurants.

The arcade is nearly as old as the capital of Hokkaido itself. It was established during the Meiji Era as a merchant area for the masses. 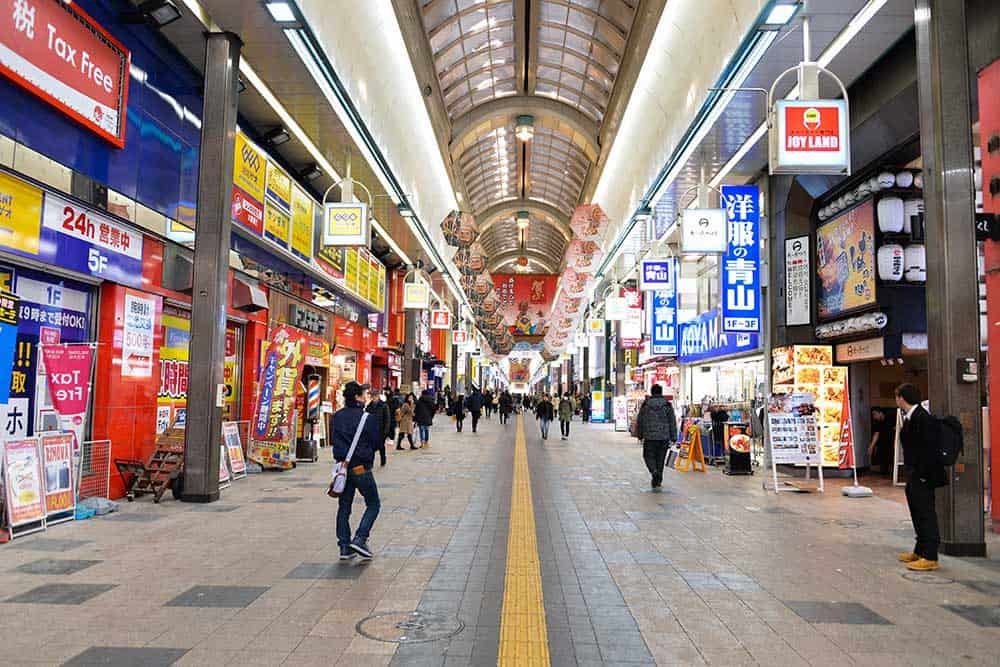 Tanukikoji Shopping Arcade refused to become a stash for big brands and upscale boutiques. Instead, it’s found its sweet spot with a variety of vintage clothing shops, second-hand stores, record stores (remember those?). There’s also a smattering of eateries here to tackle all your Japanese food cravings.

Not keen on dropping yen on some goods? Tanukikoji is the perfect place to get a sense for Sapporo’s buzzing nightlife.

Wander about nearby Nish 7-Chome Dori. A deluge of izakaya (Japanese pubs) await. It offers a tamer, more traditional after-dark experience than Susukino.

Getting there: From Susukino Station, walk two blocks north. You’ll see the entrance gate to Tanukikoji to your left.

Where to stay in Sapporo for sightseeing

Figuring out where to stay in Sapporo is hardly as challenging as in other Japanese cities like Tokyo or Osaka. (Even the smaller, but more popular, Kyoto is tougher.)

For most travellers, the city centre is the best choice. Staying between Sapporo Station and Susukino will keep many of the top things to do in Sapporo within walking distance. It’s the most convenient option for visitors.