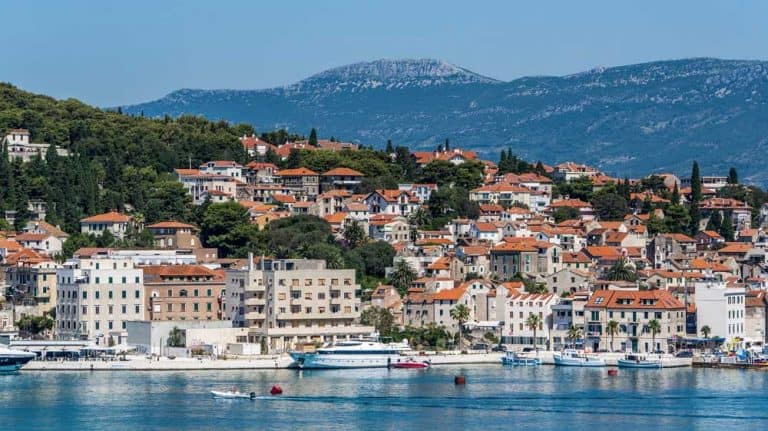 While checking out the Dalmatian Coast of Croatia, you want to spend plenty of time digging into the best things to do in Split.

The seaside city of Split is the second-largest city in Croatia and offers a mix of modern amenities and ancient history. Among the top tourist attractions in Split is Diocletian’s Palace, a fortress complex at the centre of its Old Town.

The sprawling fourth-century palace includes over 200 buildings. Within its walls, you’ll find a never-ending selection of bars, shops, cafes, hotels, and other cool places to go. Elsewhere in Split, you’ll be equally enchanted as you discover a bustling city with a crowded waterfront and fresh seafood in almost every restaurant.

Don’t know what to do in Split? Plan out your days with this complete guide to the best places to visit in Split, Croatia!

Travelling beyond Split? Check out all of our other attractions guides and our Croatia Travel Guide for more ideas on where to go, when to visit & what to do!

What to see & do in Split

Walk among the ancient buildings of Diocletian’s Palace

Covering the centre of Split’s Old Town, Romans built Diocletian’s Palace over 1700 years ago. Wandering around this massive complex, undoubtedly, tops every list of the best things to do in Split. 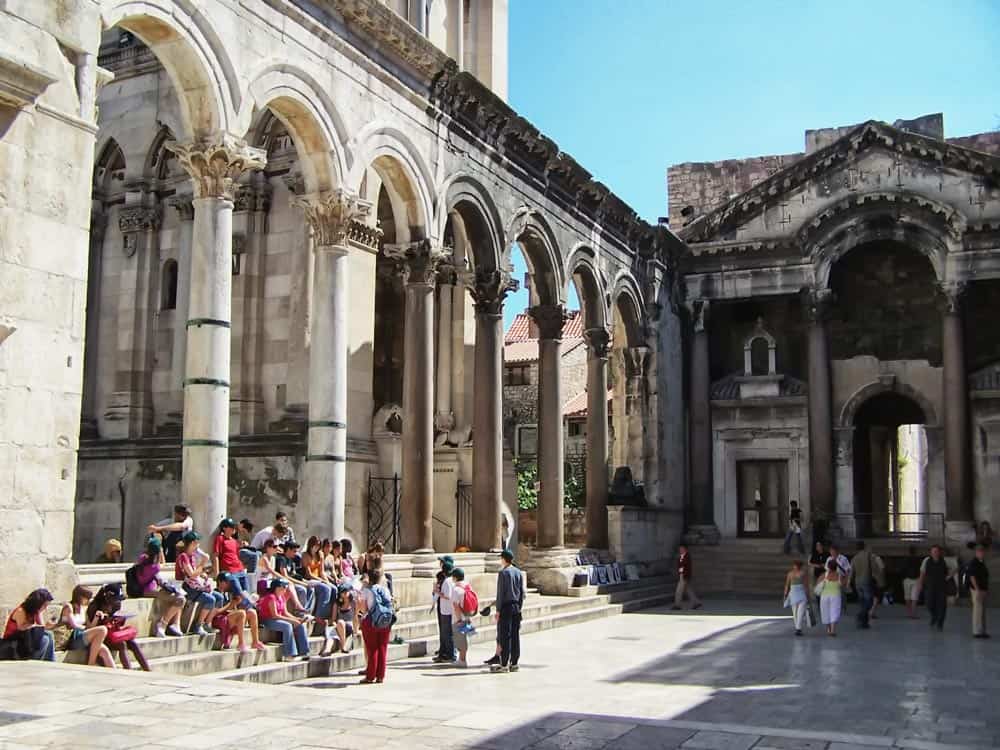 Even if you only have 24 hours in Split, the palace is one of the most important things to see in Split and a must for any Croatia itinerary. It’s a UNESCO World Heritage Site and one of the best-preserved examples of Roman architecture in Europe.

While many older European cities have castles and churches from the medieval period, the palace is over a thousand years older. It also covers more ground and includes more buildings compared to just about any other site.

The outer walls extend through the centre of Old Town. At its peak, Diocletian’s Palace housed over 9,000 people and included a mixture of watchtowers, gates, military camps, and villas.

A few of the top sights to check out here include:

Climb to the top of the St. Dominus Cathedral Bell Tower

Many of the best places to visit in Split are within the walls of Diocletian’s Palace. The top attractions include St. Dominus Cathedral, one of the oldest Catholic cathedrals in the world. 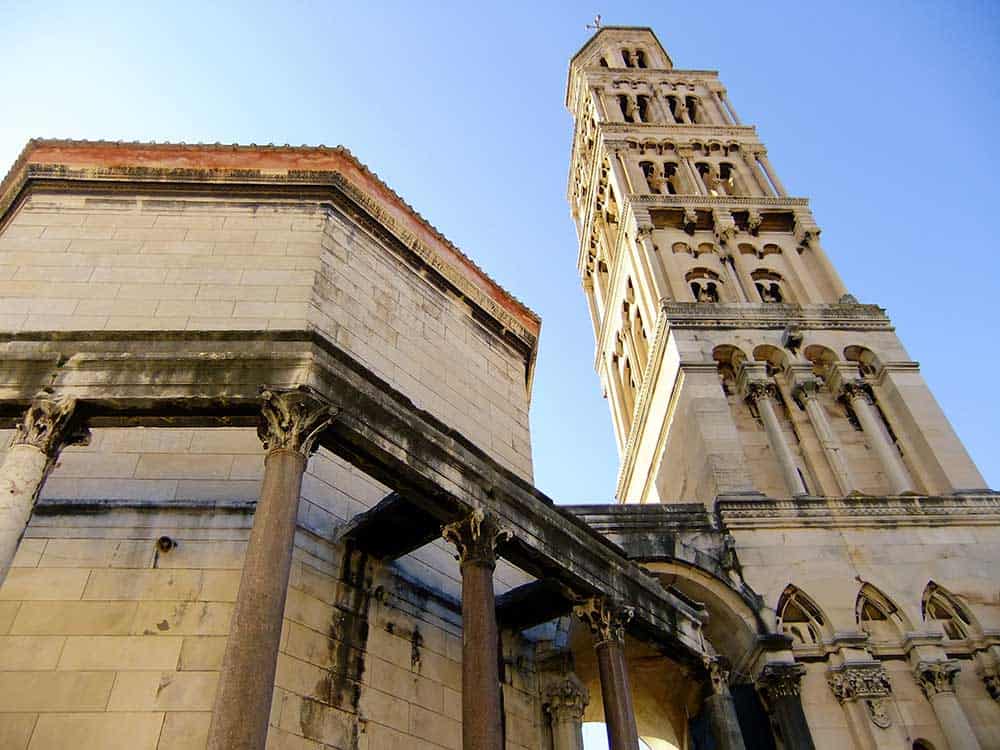 The Cathedral of Saint Dominus is still in use today. If you’re travelling to Split on a Sunday, expect a large crowd for Mass.

It was built in the seventh century and offers an impressive view of the rest of Split. To reach the most popular Split sightseeing point, you’ll need to climb the Bell Tower at the top of the cathedral.

The Bell Tower is not as old as the rest of the cathedral. It’s been thoroughly restored and reconstructed in the last 100 years, however, and gives you the best vantage point for looking out over Split.

If you’re looking for what to do in Split, look no further than wandering about Old Town.

The Old Town of Split surrounds the palace. This is where the ancient heart of Split starts to blend with modern architecture and amenities. It’s also home to the impressive People’s Square, one of the coolest places to see in Split. 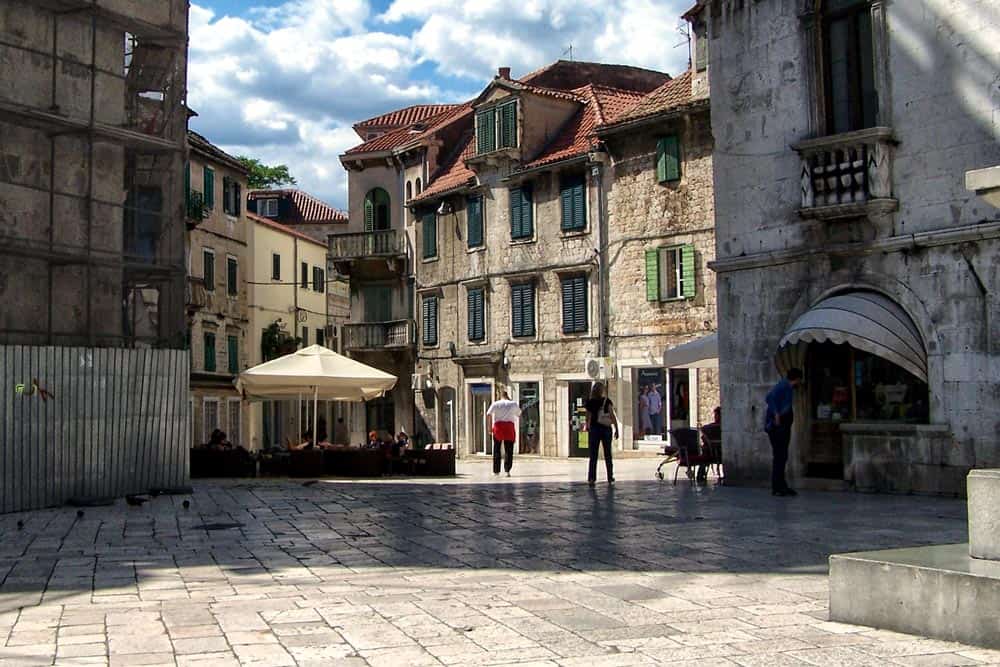 With the older buildings of the palace as a backdrop, the People’s Square is one of the most visited Split points of interest. On multiple sides, you’ll see rows of restaurants and cafes with outdoor tables along with crowds of tourists and locals.

The Old Split is worth visiting during the day or night. During the day, you’ll constantly pass other tourists going between sights. In the evening, you can hear live music coming from almost every bar. Old Town is a busy area with endless opportunities for fun and excitement.

Take a stroll near the waterfront or swim in the sea

If you want to know where to go in Split for fresh seafood, head to the waterfront. The Riva Promenade, located along the harbour, offers a modern setting and a complete contrast compared to Old Town and the palace complex. You can enjoy a break from the stone-paved roads and historic architecture. 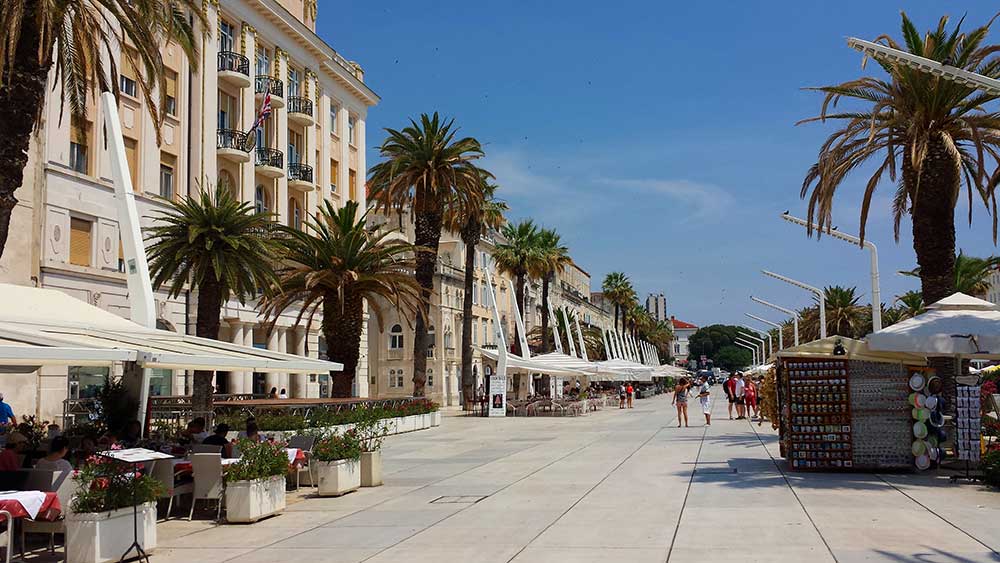 The Riva caters to tourists. It’s a pedestrian-friendly promenade with no shortage of cafes, souvenir shops, and ATMs. The promenade also includes many bars, which become quite lively in the evenings.

The harbour also borders the edge of the city, making it easy to travel to and from the other major Split landmarks. You can start your day here before exploring Old Town or end your day here and enjoy a cocktail at any of the numerous bars or restaurants.

Get another view of Split from the Marjan First Lookout

While the Bell Tower on top of St. Dominus Cathedral offers a great view of Split, there is another spot to gaze out over the ancient buildings. To the west of the city is Marjan Hill. It includes a manmade lookout spot called Marjan First Lookout (Prva Vidilica Na Marjanu) that tops the list of what to see in Split. 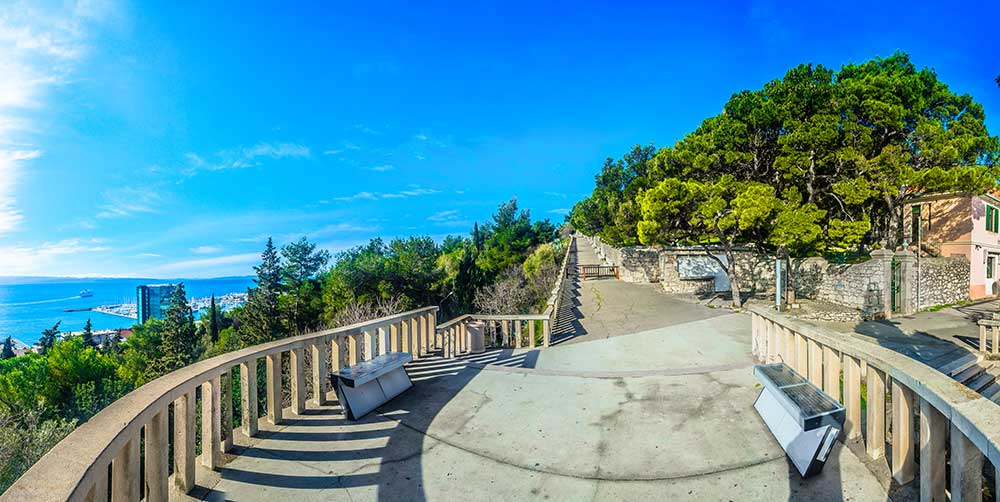 If you get to the top of Marjan Hill, you’ve gone too far. You also won’t get a great view as your line of sight is blocked by trees and other vegetation. The lookout spot is part way up the hill and includes a long stone railing.

The railing leads to a plateau and terrace where you can take a breather and snap a few panoramic photos of Split. This is one of the city’s top attractions, yet, it’s overlooked by most tourists.

Thanks to the seclusion of this spot, you can take your time and enjoy the view without standing shoulder to shoulder with other visitors.

Relax on the beach

The seaside location of Split means that spending a little time chillaxing on the beach is a must for unwinding on your visit. 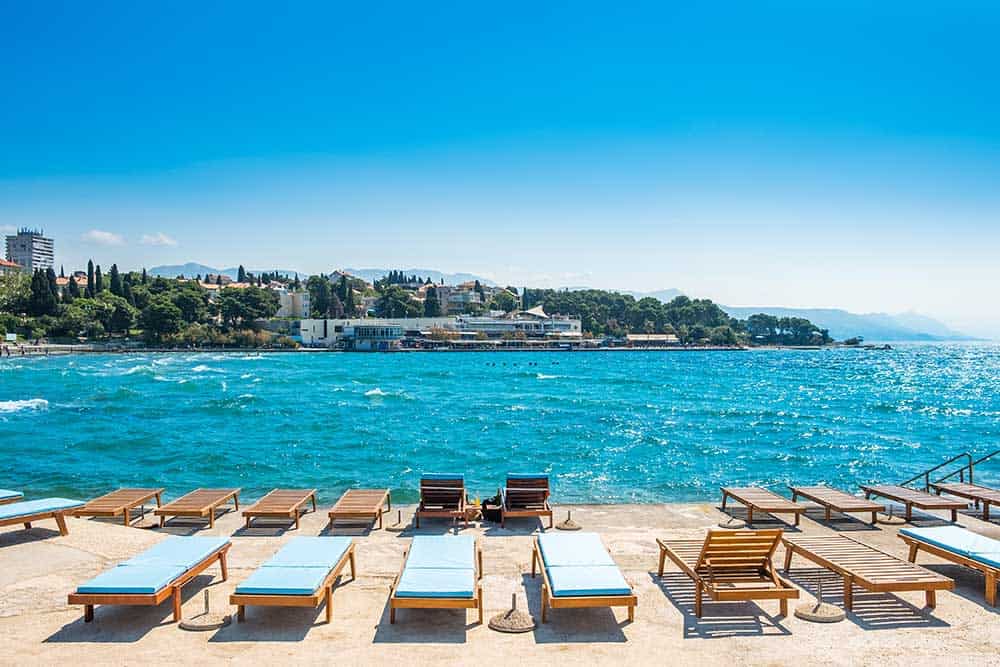 Enjoy the pleasures of the Dalmatian Coast to their fullest by checking out some of these best beaches in Split:

Go wine tasting at a local winery or wine bar

There are vineyards & wineries located all around Croatia, and that includes the Dalmatian Coast near Split. One of the best places to do a wine-tasting in the area is Putalj Winery, located 20 minutes outside of the city. They offer wine tours from Split with a prior reservation. 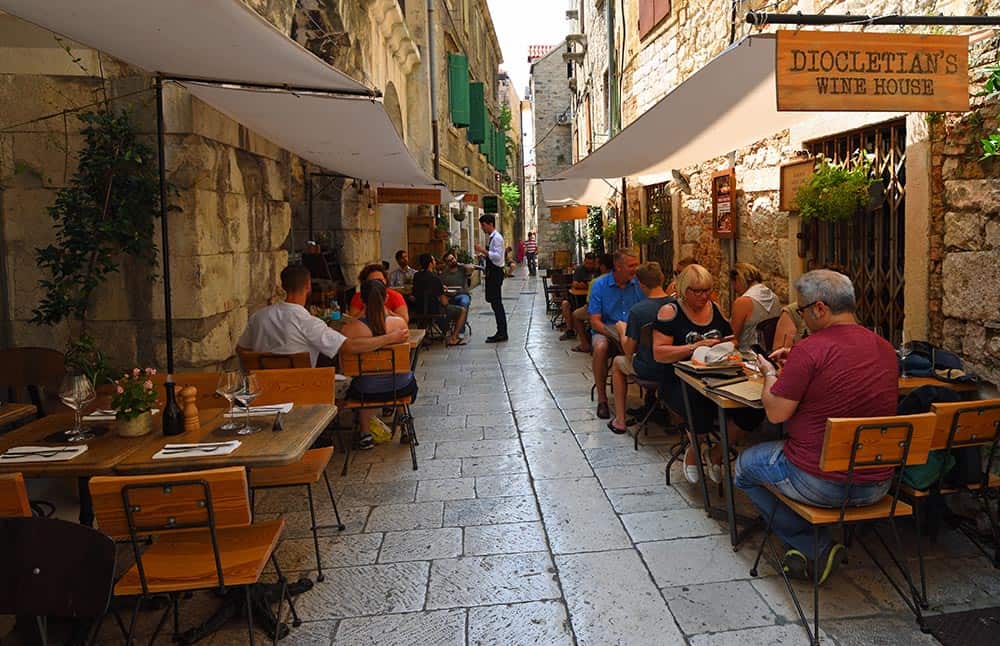 Alternatively, stick around the city centre and channel your inner sommelier at Zinfandel Wine Bar. This popular wine bar features a superb selection of Croatian wines from both well-renowned and boutique wineries. The food here is quite remarkable as well.

Climb to the top of the ruins of Klis Fortress

If you run out of ideas for what to do in Split, head away from the city and to the nearby Klis Fortress. The fortress was built on a hill next to the city and provides another viewpoint for looking out over Split and the Dalmatian Coast. 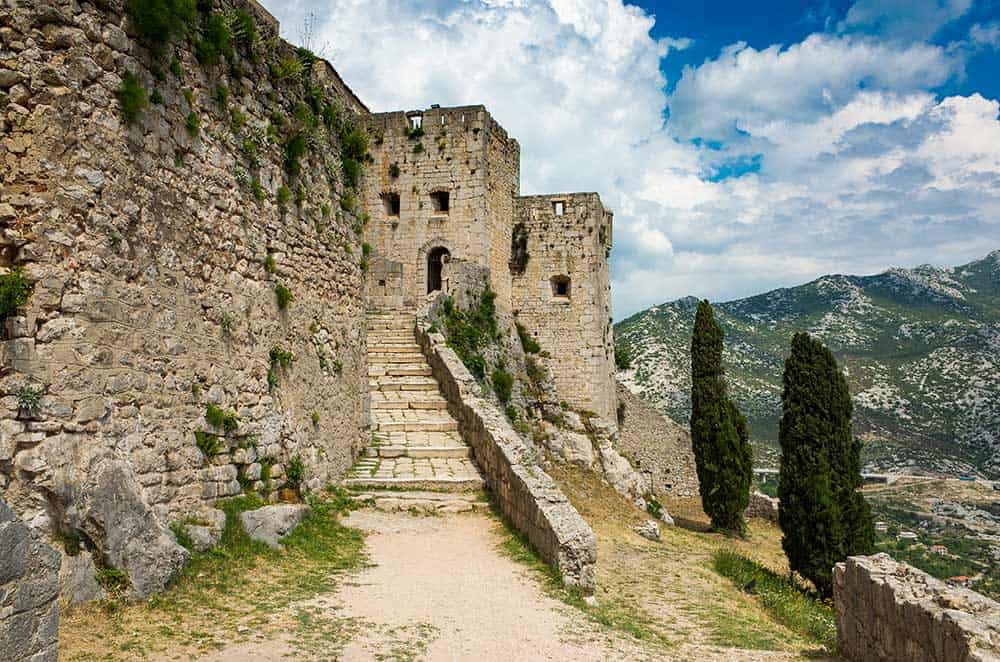 The hill is part of the mountain pass between the Mosor and Kozjak mountains, which are just a short trek from Split. Seeing its geography, it’s hardly a surprise that the fortress set the scene for many-a battle over its history, helping to repel foreign invaders like the Ottomans and Mongols.

Klis Fortress also contains an interesting museum where you can check out ancient armour and traditional Croatian uniforms. Game of Thrones mega-fans may also recognize the fortress as the filming location for Meereen.

Escape the city on a day trip

One of the bonuses of travelling to Split is that it’s a wonderful base for exploring Croatia in more depth. Some of the best day trips from Split include…

Located just 40 minutes from Split by bus, the UNESCO-listed medieval town of Trogir is a must-see if you’ve got an extra day or two in the city. 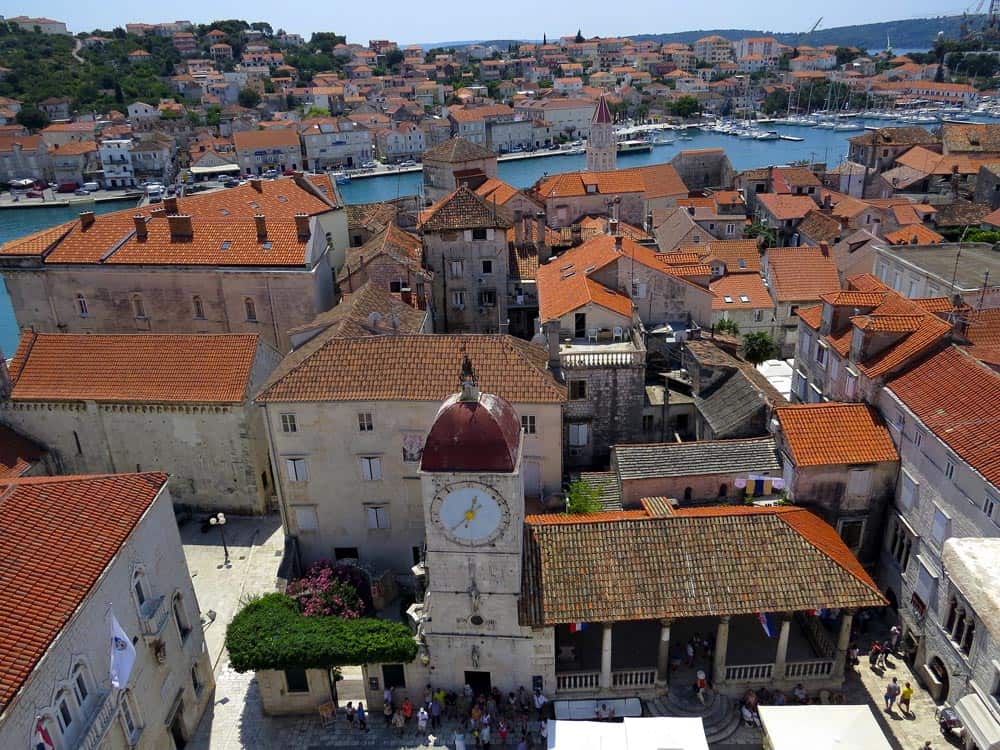 Within the ancient city walls, hemming in the Old Town of Trogir since the 15th century, you’ll be able to explore Trogir’s delightful mishmash of Renaissance and Romanesque architecture.

Among the top activities in Trogir is to follow a thorough tour through Old Town with a walk along the town’s beautiful seaside promenade and a delicious seafood meal & drink.

Sitting just over an hour away from the city about 10 kilometres inland from Sibenik, Krka National Park is one of the top escapes from Split for nature lovers. 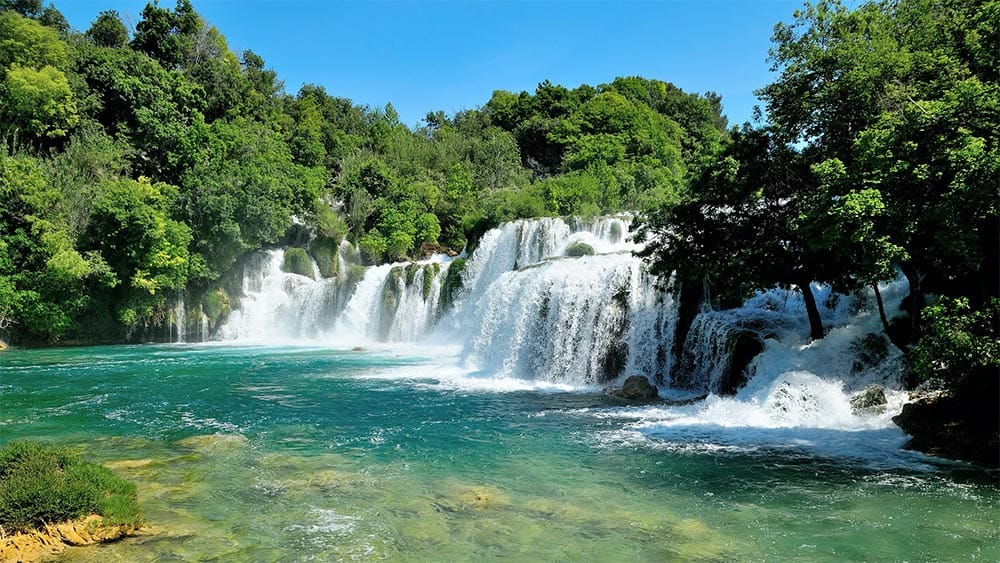 Krka National Park is famous for its spectacular Krka Waterfalls, counted among some of the most popular places to see in Croatia. The easiest way to see the park at its finest is to hop on the boat trip that’s included in your park entrance ticket.

Numbering among the world’s most breathtaking natural attractions, Plitvice Lakes National Park is an unmissable destination while visiting Croatia. This UNESCO World Heritage Site national park protects a series of 16 interconnecting lakes, cascading into each other over various topographical obstacles. The park is connected by a series of boardwalks and hiking trails where you can get up close with the lakes and waterfalls. 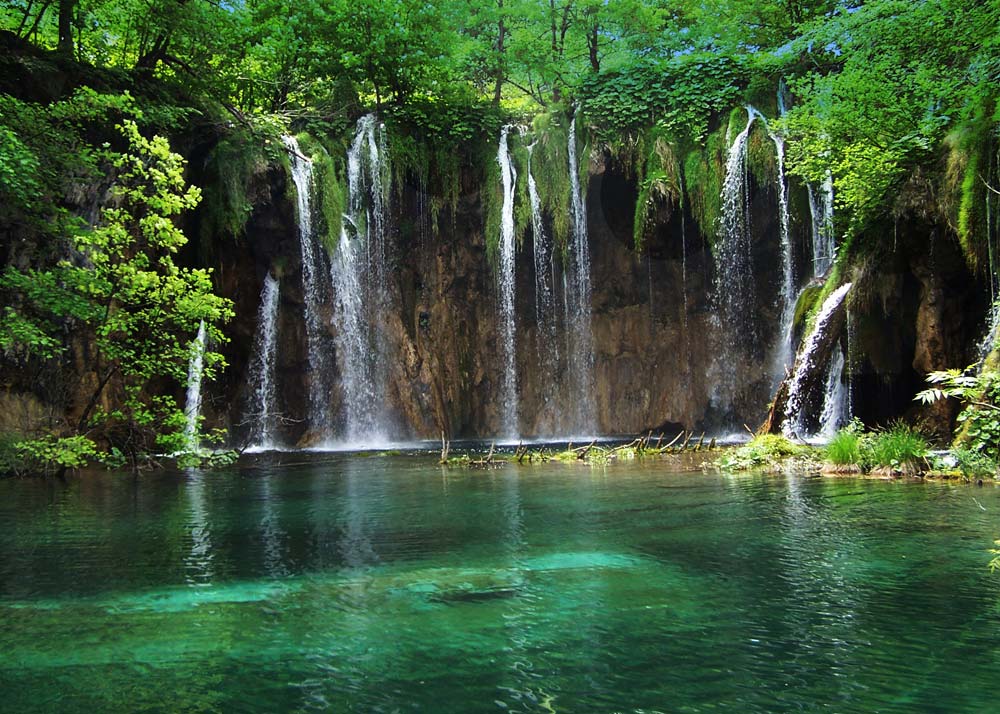 Depending on how the light is hitting the lakes and their base content, their colours fluctuate anywhere between bright azure and emerald green. It makes for a scene that’s truly life-altering in its beauty.

Although I’d recommend spending more than one day in Hvar, visiting Hvar Island on a day trip is a great way to get out of Split and enjoy Croatia’s Dalmatian archipelago.

Hvar Island is well-renowned as the swankiest and most raucous of all the islands in Croatia. Hvar Town, the island’s urban centrepiece, is chock-loaded with luxury hotels, beach bars, and a harbour filled with yachts of the rich (and possibly famous).

Elsewhere on the island, however, is where the real magic happens. Most travellers prefer the quiet moments to be had in the island’s abandoned villages, vineyards, olive groves, and lavender fields.

The historic town of Stari Grad on Hvar Island is located one hour and 45 minutes from Split by ferry. Even easier is to hop onto a Full-Day Blue Cave and Hvar Tour.

Where to stay in Split for sightseeing

As the popularity of this Dalmatian Coast city continues to soar, so too does the difficulty of choosing where to stay in Split. Undoubtedly, you’ll get the most mileage out of your itinerary by staying in the lovely Old Town. Here are a few top hotels in Split to get your accommodations search started…