If you’re visiting Canada, make the most of your trip by discovering some of the best things to do in Toronto. As the largest city in the country, Toronto has a diverse range of sites to explore.

No matter your interests, you can find fun things to do in the city. The top tourist attractions in Toronto include museums, shopping districts, historic sites, parks, and even a zoo. The city is a sprawling metropolis with a bustling downtown and a variety of green spaces.

Visitors will enjoy wandering down the trendy King and Queen West, where they can shop during the day and grab cocktails at night. The downtown core holds the city’s business district as well as many of its theatres for those who want to catch a show. There’s even a Chinatown not far from the downtown where you can find bustling produce markets, delectable dim sum, and many Asian dessert and tea shops.

Visit the city in the early weeks of September, and you’re bound to have close up encounters with your favourite celebrities during the world-renowned Toronto International Film Festival (TIFF).

With so much to see and do, you may need help deciding where to go in Toronto. Plan your trip with this guide to the best places to visit in Toronto…

What to do in Toronto: Top attractions & best places to visit

Get a view of the city from CN Tower

The CN Tower is the most recognisable of the many Toronto points of interest, standing over 550 metres tall. Visiting the CN Tower is one of the best things to do in Toronto for a variety of reasons. It’s in the centre of downtown, making it one of the first sites that you’ll come across. It’s also near the most visited commercial districts with hundreds of shops, restaurants, bars, and malls. 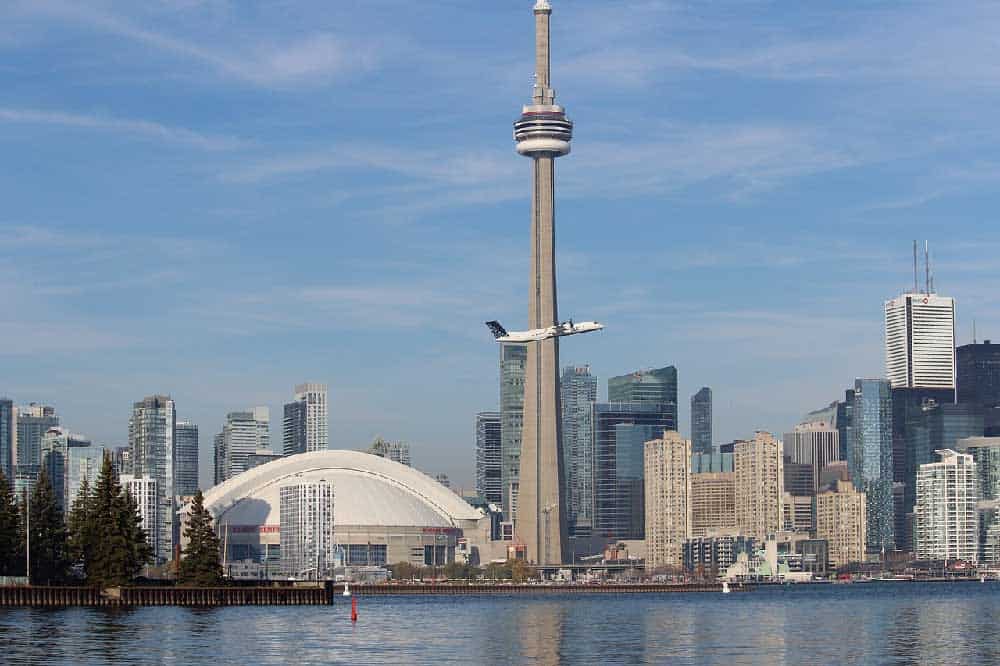 Along with convenient access to shopping and dining, visiting the CN Tower is where to go in Toronto for the best view of the city. The observation tower gives you a panoramic viewpoint of Toronto’s skyline.

Grab a coffee alongside local hipsters in the Distillery District

A trip to the Distillery District has quickly become one of the best things to do in Toronto for travellers. It’s a unique destination in this modern city, due to the abundance of Victorian-style architecture. The brick-lined streets include many indie restaurants and small boutiques. It’s also a pedestrian-only neighbourhood, allowing you to wander around and leisurely explore the area. 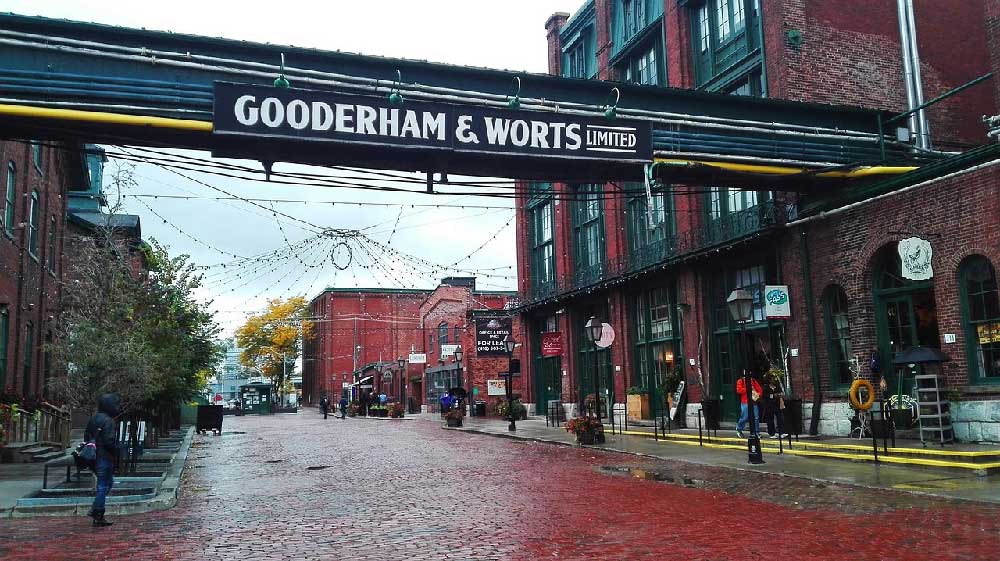 In the winter, the Distillery District turns into a winter wonderland and is home to one of the best Christmas markets in Canada.

The Distillery District is home to many dining establishments, coffee shops, and art galleries. When you’re in the area, visit Arta Gallery to view a rotating collection of contemporary art exhibits. If you’re interested in abstract visual art, head over to Corkin Gallery.

Visit a popular filming location with a trip to Casa Loma

The top points of interest in Toronto include various filming locations, some of which you may recognise from movies and television shows. One of the most iconic locations is Casa Loma, a mansion that resembles a small castle. It was built in 1914 but features gothic revival-style architecture. 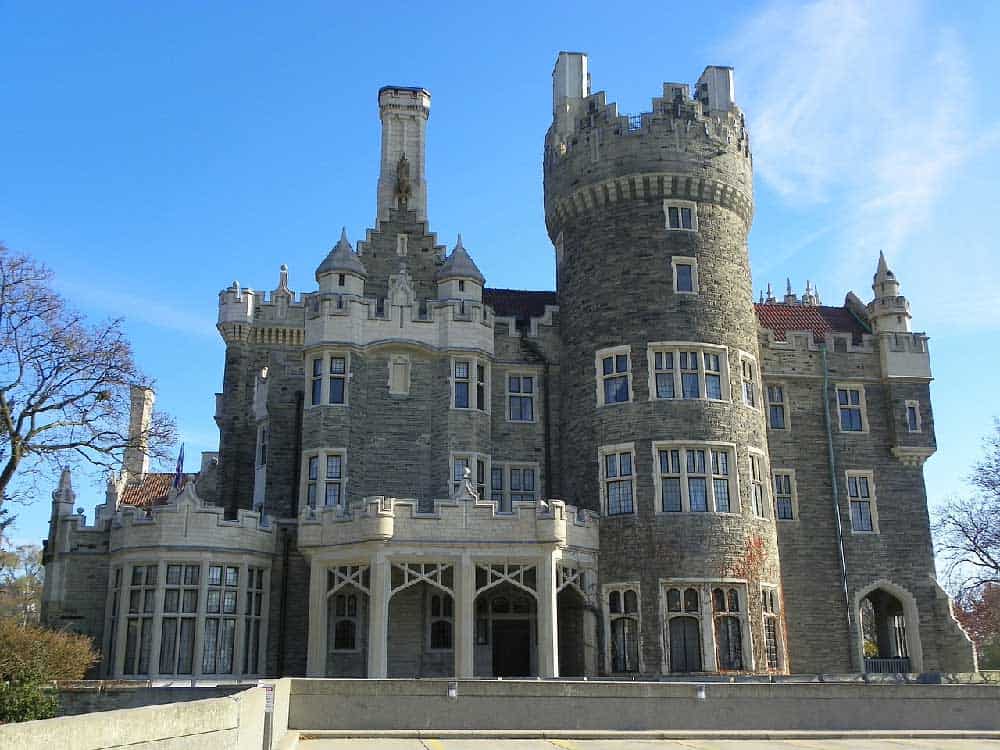 The mansion is located on the top of a hill overlooking the city. From the upper windows of the castle, you can see the skyline of Toronto. The castle is now a museum. It’s open to the public during most of the year. Take the pricey self-guided tour to see the interior and get a better view of the city.

You’ll find some of the top things to see in Toronto inside the Royal Ontario Museum. It’s the largest museum in Canada, containing over six million items and 40 different galleries. The diverse collection covers natural history, world culture, and contemporary art. You can view dinosaur bones in one part of the museum and world-famous paintings in another. 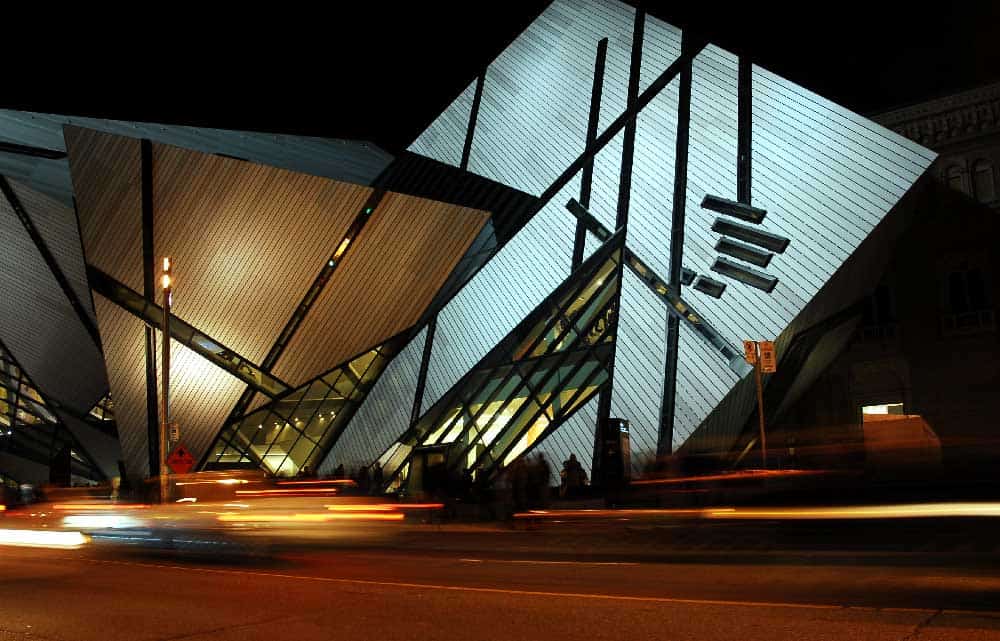 Visiting the museum can easily turn into an all-day excursion. Get a map of the museum when you enter or risk getting lost in the labyrinth of corridors and galleries. If you want to beat the crowds, try to arrive early in the day or in the middle of the afternoon.

Connect with nature at High Park

High Park belongs on any list of the top tourist attractions in Toronto as it offers a variety of things to do. While you can spend a few hours walking the trails and enjoying the scenery, the park also has a zoo, playground, gardens, and various facilities. 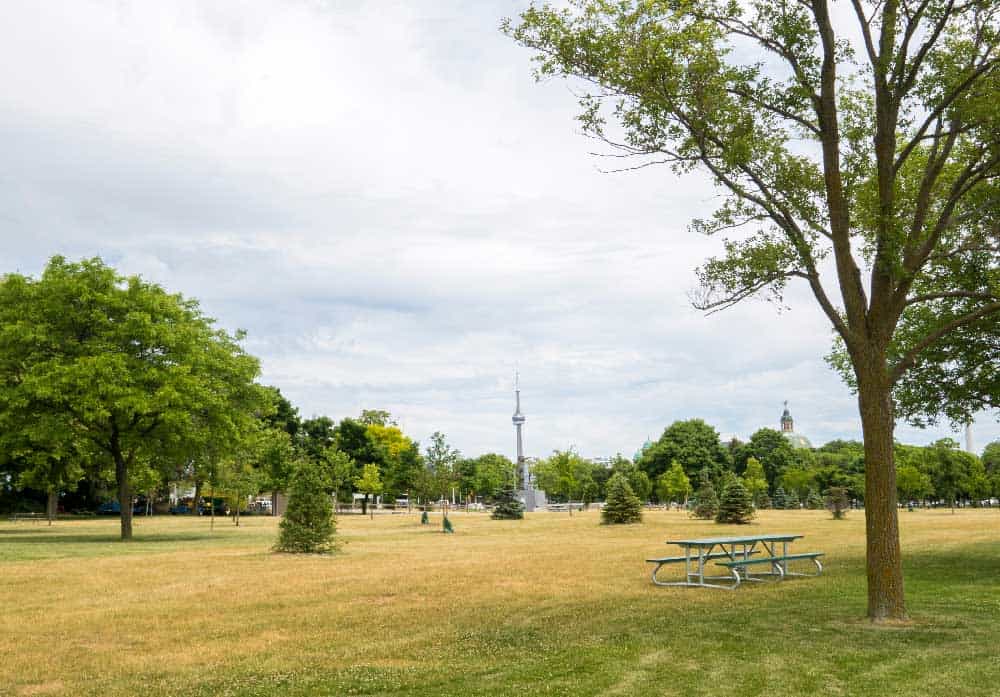 The zoo isn’t very large, containing mostly farm animals and a few exotic species. You’ll see bison, sheep, cattle, peacocks, reindeer, and emus. If you’re travelling with kids, make sure that you stop at the llama pen for feeding and petting.

Along with the zoo, the park has acres of gardens, including a landscaped ornamental garden area. The garden has a fairy-tale atmosphere with large trees and a colourful array of flowers and foliage. In the springtime, the park comes alive with cherry blossoms, and fills with locals who often picnic under the beautiful pink blooms.

If you have just one day in Toronto to see it all, start at the Eaton Centre. It’s connected to a variety of other Toronto attractions, including Toronto CIty Hall and some of the main shopping centres. 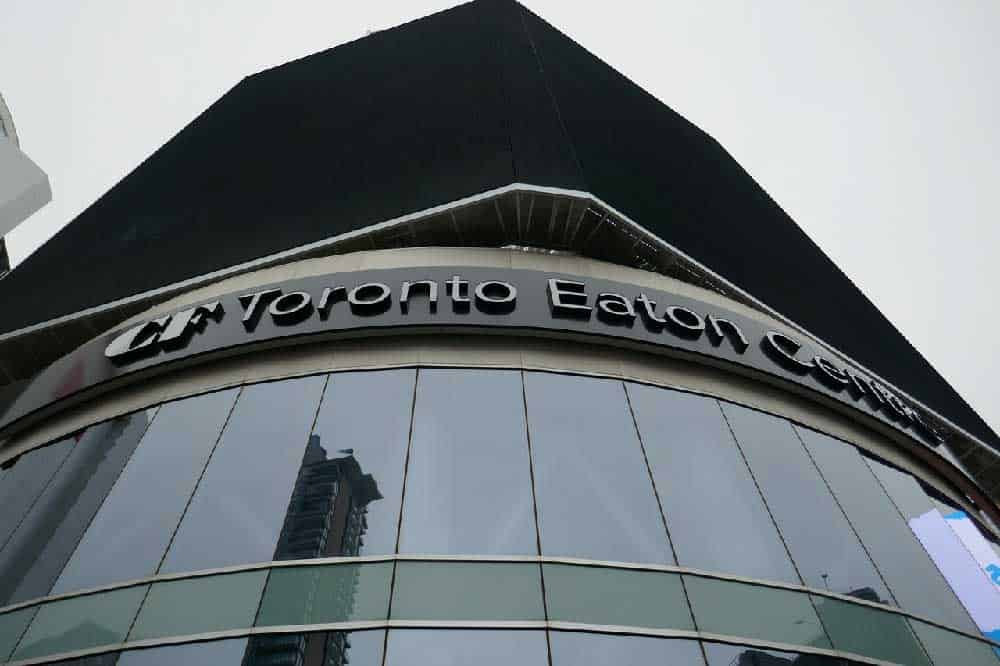 Eaton Centre is a shopping mall and office complex and attracts more visitors compared to any other attraction in the city. It also links to Toronto’s PATH. The PATH is an underground walkway covering over 30 kilometres. The PATH connects the business district with dozens of nearby shopping and entertainment venues. You could spend the entire day visiting the top attractions without stepping outside or onto a major street.

Enjoy the impressive billboards and neon lights of Yonge-Dundas Square

When you’re trying to decide what to do in Toronto at the end of the day, visit Yonge-Dundas Square. It’s a large public square with skyscrapers covered in neon lights and multi-storey billboards. At night, the billboards transform the square into Toronto’s version of Times Square. As you walk through the centre of the square, watch out for the array of fountains spread across the main walkway. 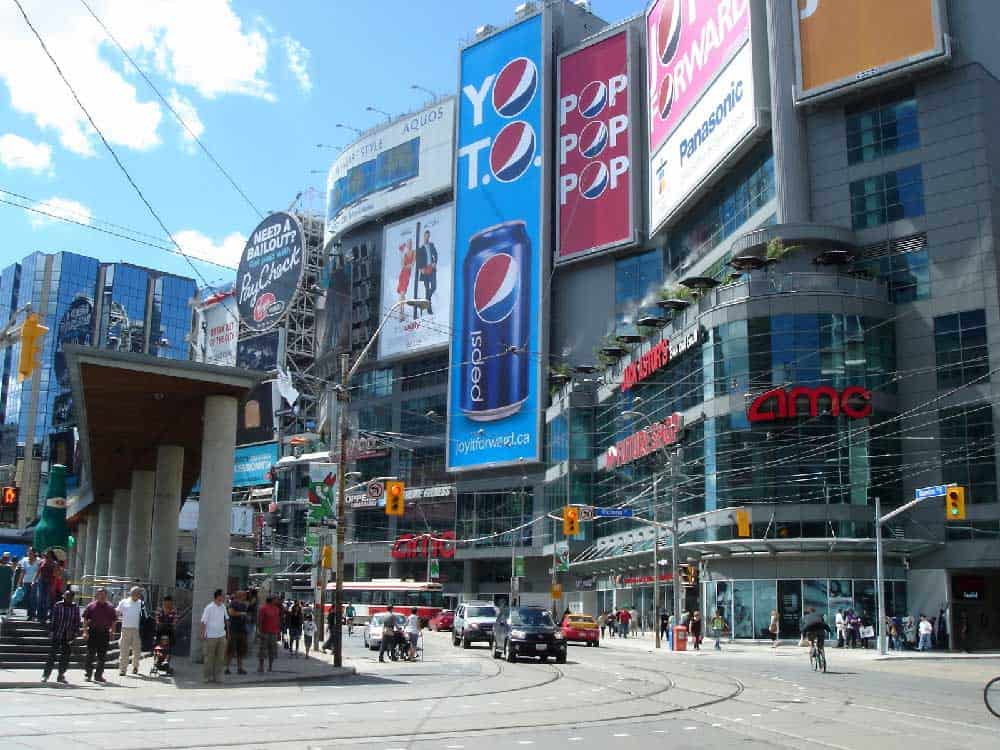 Yonge-Dundas Square is one of the best places to visit in Toronto to get your shopping fix. You’ll find a wide range of shops catering to every interest. Browse for electronics, clothing, art, and more. It’s also surrounded by several other landmarks, including Eaton Centre and the Citytv Building.

Break the bank in Yorkville

Yorkville is a popular Toronto sightseeing destination, mostly known for its collection of high-end shops. It’s home to the Mink Mile, a stretch of road containing many top brands. It’s become one of the most expensive streets and the third most expensive retail space in the world. 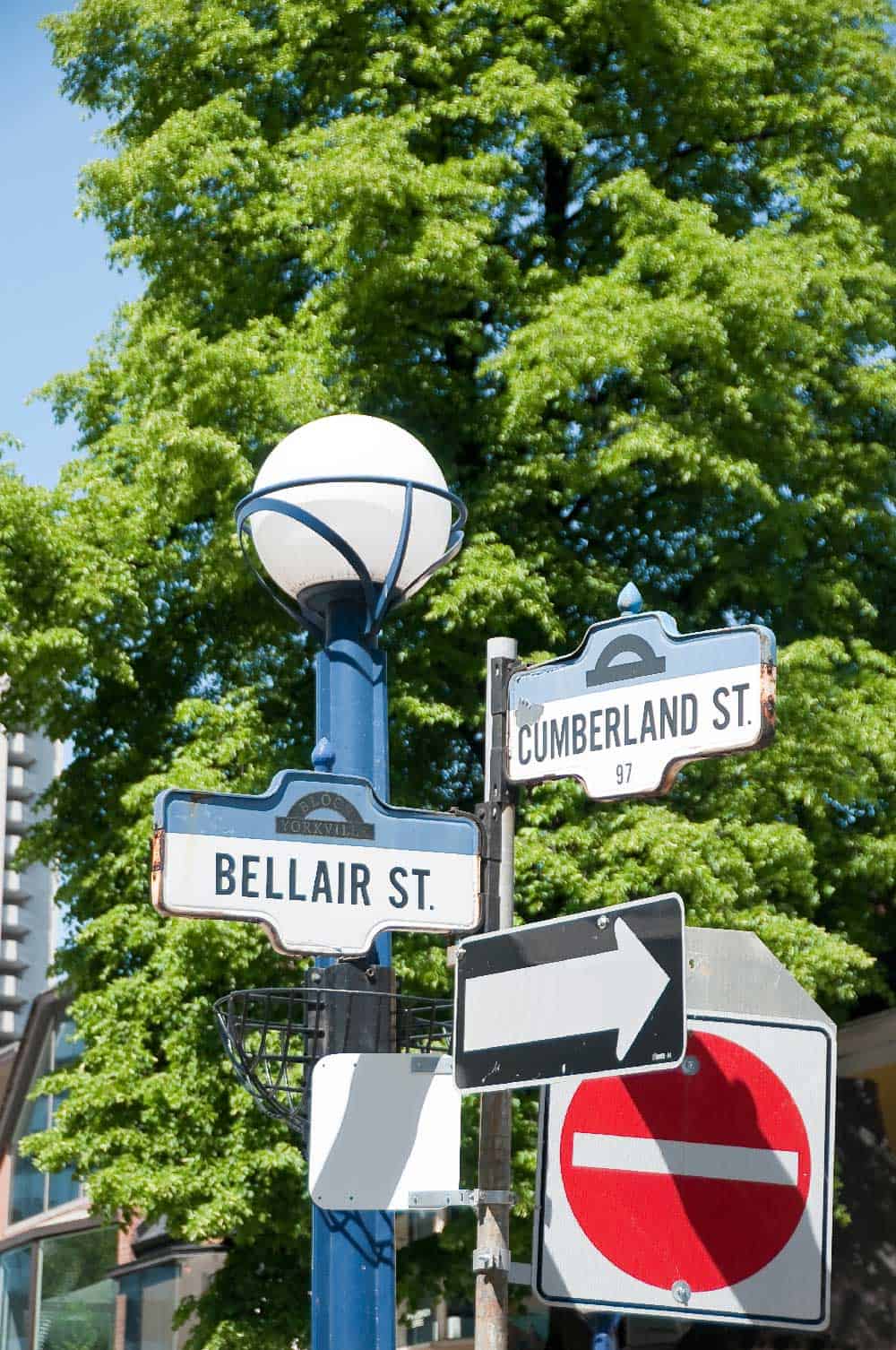 While the shops may be too costly for some travellers, it’s still a great place to stroll and window shop. Yorkville tends to be a little quieter compared to other parts of Toronto, giving you a break from the crowds in the downtown area. Browse the luxury shops and stop at one of the coffee shops to warm up.

Where to stay in Toronto: The best hotels for sightseeing

As the largest city in Canada, figuring out where to stay in Toronto can be a challenge. If you want to check out the top points of interest in Toronto, the best areas to stay in Toronto are those in & around the downtown core including the Entertainment District, Yorkville, and West Queen. Here are a few great hotels to start your accommodations search…

Beyond Toronto attractions: More places to go in Canada