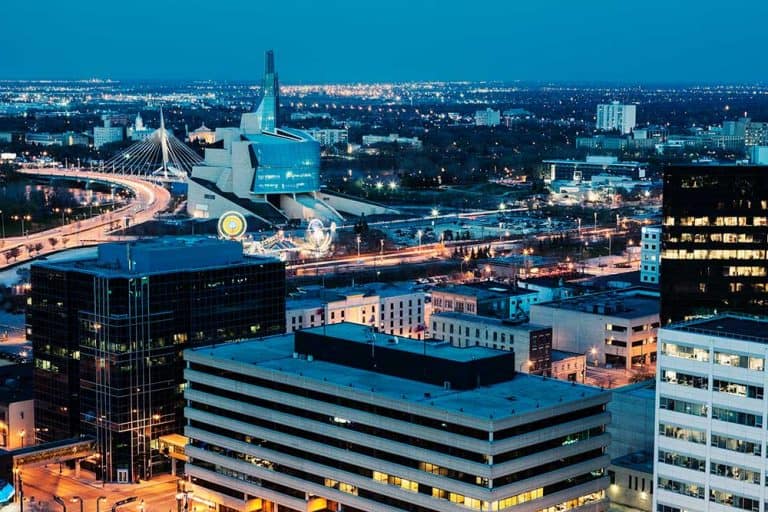 If your Canada trip itinerary lands you in the Canadian Prairies, indulging in the best things to do in Winnipeg is a must.

Winnipeg dwells at the junction of the Red River and Assiniboine River. It’s the largest city and capital of the province of Manitoba. Although on the “road-less-travelled,” Winnipeg is one of the most important cities in Canada’s history.

The top tourist attractions in Winnipeg weave together an interesting narrative. It walks travellers through its early days as a First Nations and French trading post to becoming one of Canada’s largest modern cities.

Need some help figuring out what to do in Winnipeg? Plan your trip with this guide to the best places to visit in Winnipeg, Manitoba.

The Canadian Museum of Human Rights is one of Winnipeg’s most recognizable & impressive landmarks. The museum is a must-visit Winnipeg attraction for history & culture buffs alike. 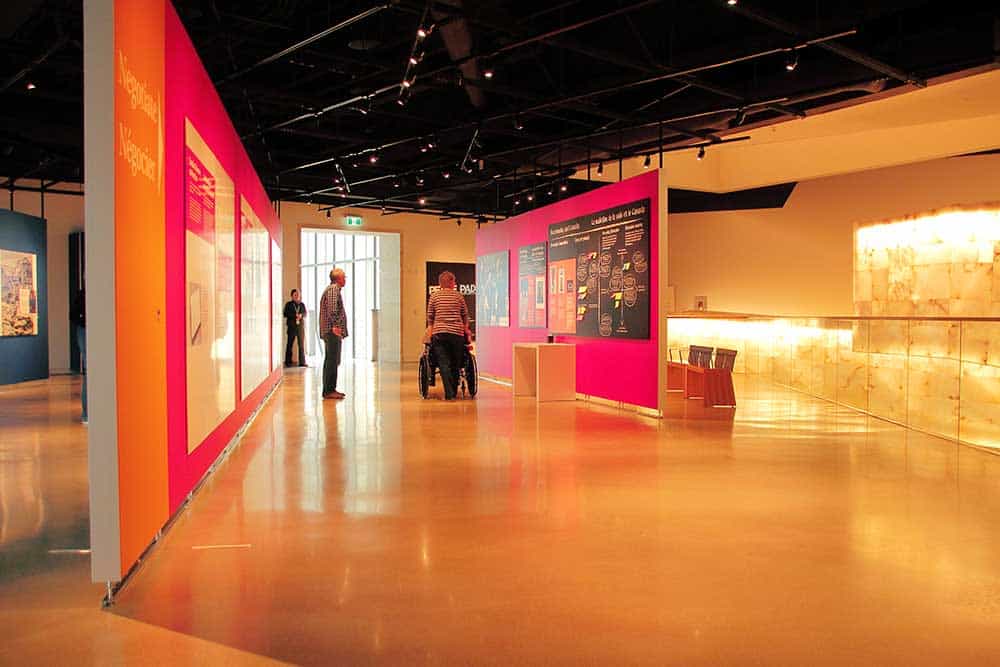 The museum is popular for its informative & interactive exhibits and galleries. The exhibitions detail the fight for human rights in Canada and beyond.

The Canadian Museum of Human Rights also offers several tours that delve deeper into various human rights subjects. Topics include the rights of women, Métis, and other Indigenous groups in Canada.

The museum is open Tuesday to Saturday from 10am to 5pm.

Assiniboine Park Zoo was established at the turn of the 20th century. Today, it’s one of the top places to go in Winnipeg for families travelling with younger children.

Journey to Churchill also hosts the Leatherdale International Polar Bear Conservation Centre. The centre is a world leader in the polar bear conservation, research, and education.

The conservation centre is open once again after a dreadful 2020 tourist season. Pop in. It’s a fun & educational experience and a great place to learn more about this fascinating & beautiful animal.

When figuring out what to see in Winnipeg, the Exchange District is a great place to start.

This vibrant historical neighbourhood is a National Historic Site of Canada. Walking around, you’ll stroll among the city’s finest collection of heritage architecture. Much of it dates between 1880 and 1920. At the time, Winnipeg was Canada’s third-biggest city. It was also one of the country’s most important trading centres.

The building boom in the late-19th and early-20th centuries in The Exchange earned Winnipeg the title of the “Chicago of the North.” It was a prestigious nod to the city’s growing architectural portfolio. 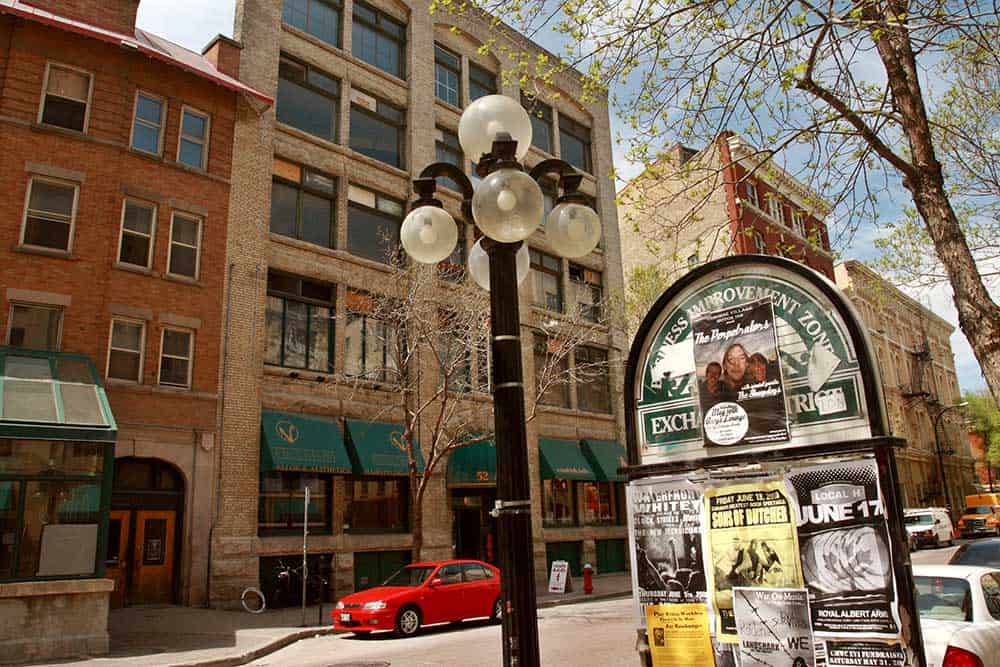 Shortly after its heyday, the area saw a decline in fortunes. These days, however, it’s on the mend. The Exchange District is once again one of the coolest places to hang out in Winnipeg and has become the city’s cultural hub.

Explore its streets and historical buildings. Within them, you’ll scope out hip restaurants, coffee shops, art galleries & charming boutique shops. Some of Canada’s most innovative tech start-ups have also set up shop in the neighbourhood.

If you’re visiting the Exchange District in summer, be sure to check out Old Market Square. This historic square hosts plenty of events throughout the summer tourist season. The most popular events include The Winnipeg Fringe Festival and Winnipeg Jazz Festival.

Set in the heart of downtown, the Winnipeg Art Gallery (WAG) is one of the oldest art galleries in Canada and the biggest art museum in Manitoba. The gallery is home to over 27,000 works. Its collection spans a variety of local, Canadian, and international artists.

Most intriguing at Winnipeg Art Gallery is its massive collection of modern Inuit art. It’s the largest Inuit art collection in the entire world. 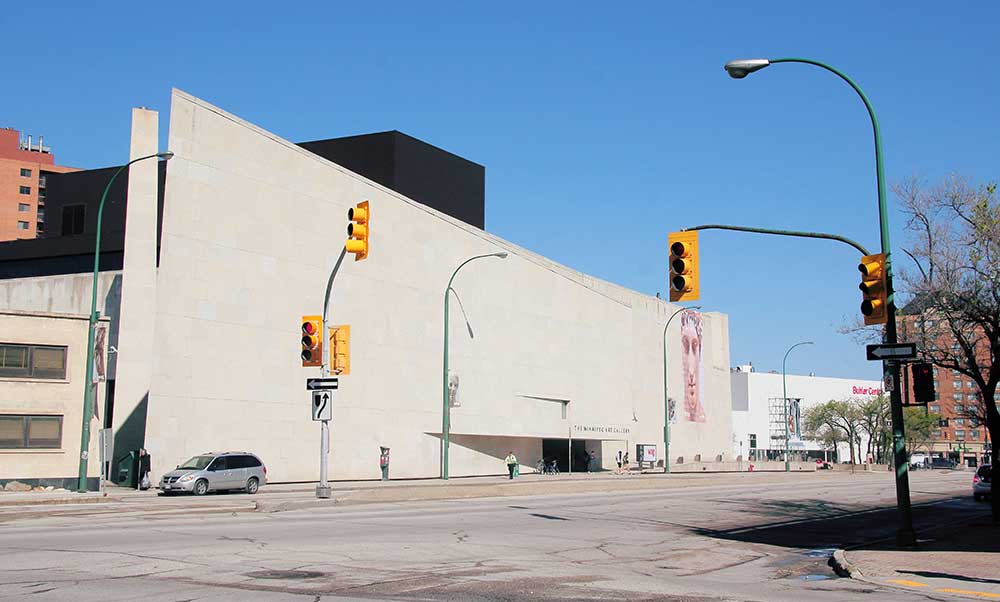 Even if you’re not an art lover, the architecture at WAG should catch your eye. Indeed, the modernist-style main building turns head. (And not always in a good way.)

The new additions to the Inuit Art Centre should remedy that reputation though. The renovation includes a three-storey glass vault that’ll house thousands of Inuit sculptures. Rebranded as Qaumajuq, the Inuit Art Centre is bound to be a show-stopper when it re-opens in 2021.

Ever wondered where all those shiny loonies and twoonies in your pocket came from? Pop in for a tour of The Royal Canadian Mint in Winnipeg.

One of the top points of interest in Winnipeg, The Mint produces all those cute animal-laden Canadian coins. It even produces coins for about 75 other countries. 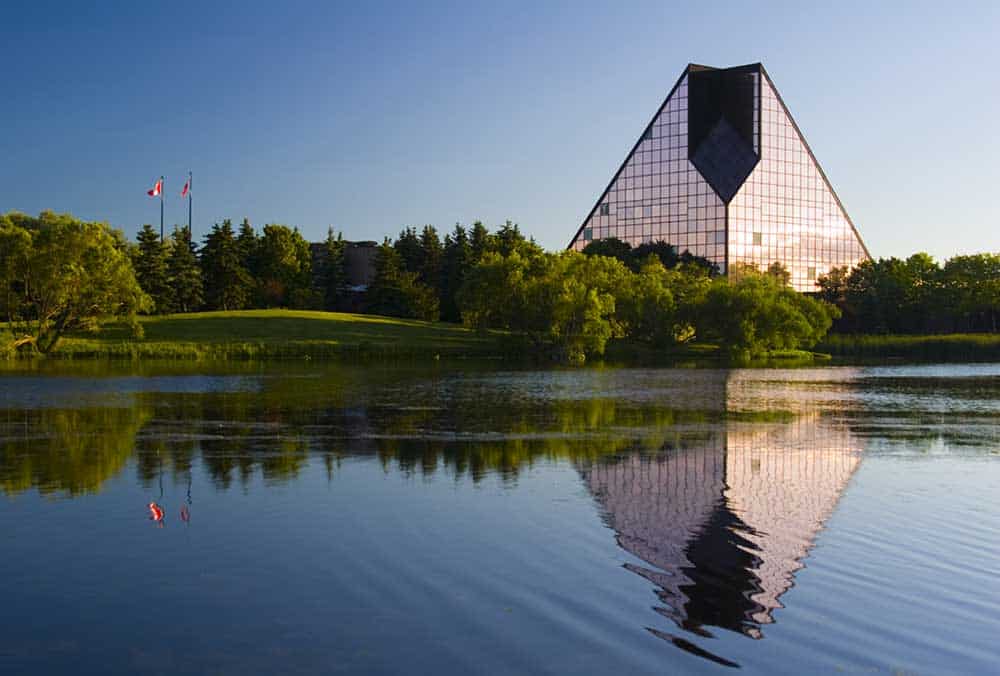 On a 45-minute tour, you’ll get a look at the Mint’s innovative coin manufacturing facility. You’ll also learn about all the intricacies of coin-making.

Elsewhere in the Royal Canadian Mint, you can try your hand at striking your own coin. (Or simply buy collector coins at the Boutique gift shop.)

A fan of stately architecture? You won’t be disappointed to set aside time for the Manitoba Legislative Building.

Completed in 1920, the 74-metre-high building is home to the Manitoban parliament. It showcases a striking neoclassical style that’s rare within Canada’s architectural palette. 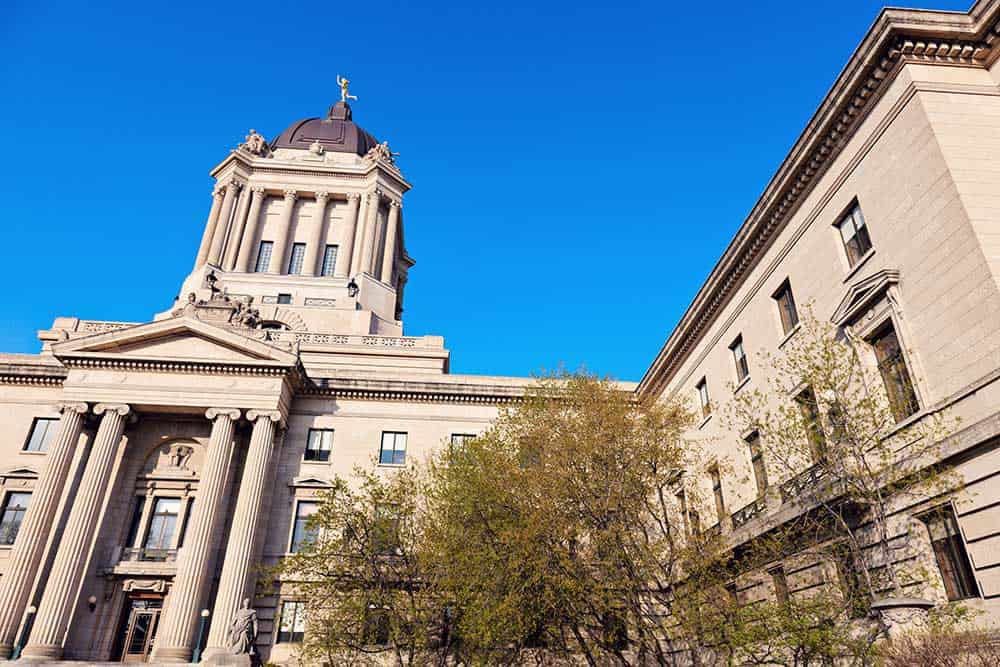 A couple famous features await, including a gilded statue fashioned after the Roman god Mercury and Greek god Hermes. But the Manitoba Legislative Building is more than just a handsome face. The building is also the site of the most popular tours in Winnipeg, The Hermetic Code Tour.

On the Hermetic Code Tour, you’ll discover the sacred geometry hidden within the architectural design. You’ll get to learn all about architect Frank Worthington Simon’s sly use of the Fibonacci sequence and the Golden Ratio.

Straddling the Red and Assiniboine Rivers in the heart of downtown Winnipeg, The Forks is one of the city’s most interesting areas.

A modern take on an ancient trading centre, The Forks Market is one of the coolest things to see in Winnipeg. The market is home to an endless supply of vendors selling everything from wine & artisanal cheese to crafts & artwork. 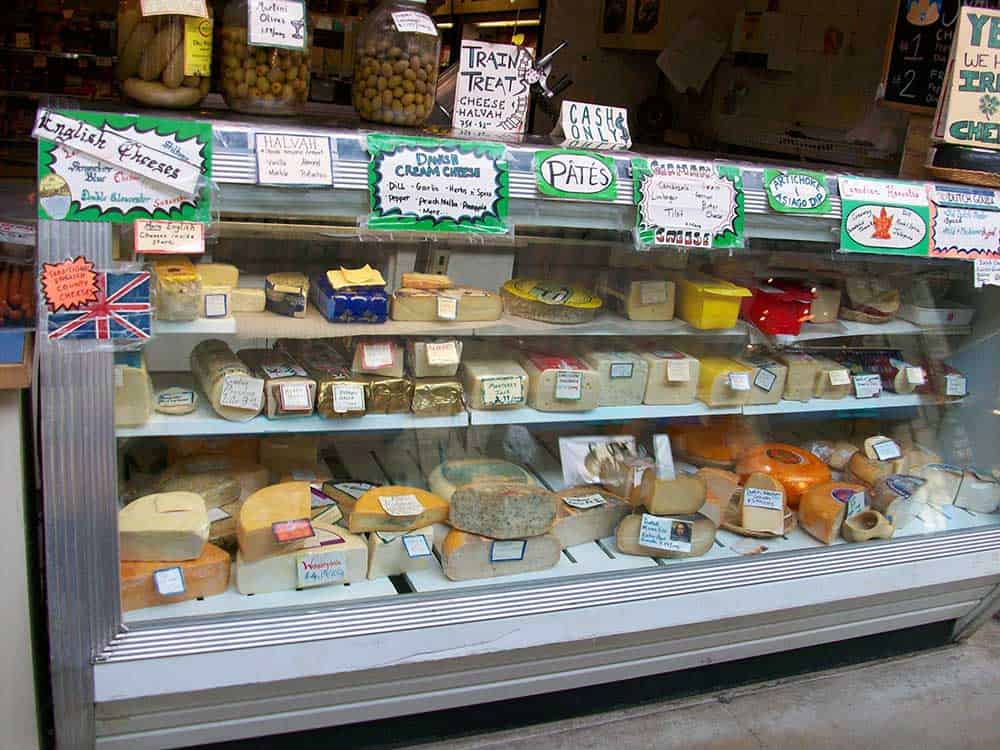 Even if you can only spare one day in Winnipeg, set aside some time to explore The Forks. Wandering about, you’ll enjoy riverside shopping, entertainment, and plenty of dining options. There’s something for every taste here!

Winnipeg isn’t a common place to start your search for French Canadian culture. But you’ll find it in spades in the neighbourhood of Saint Boniface.

St. Boniface hugs the banks of the Red River opposite The Forks. From downtown, it’s a quick walk over the Esplanade Riel Pedestrian Bridge to St. Boniface. Once a separate city from Winnipeg, Saint Boniface was founded as a French and Métis enclave within Britain’s former Red River Colony. 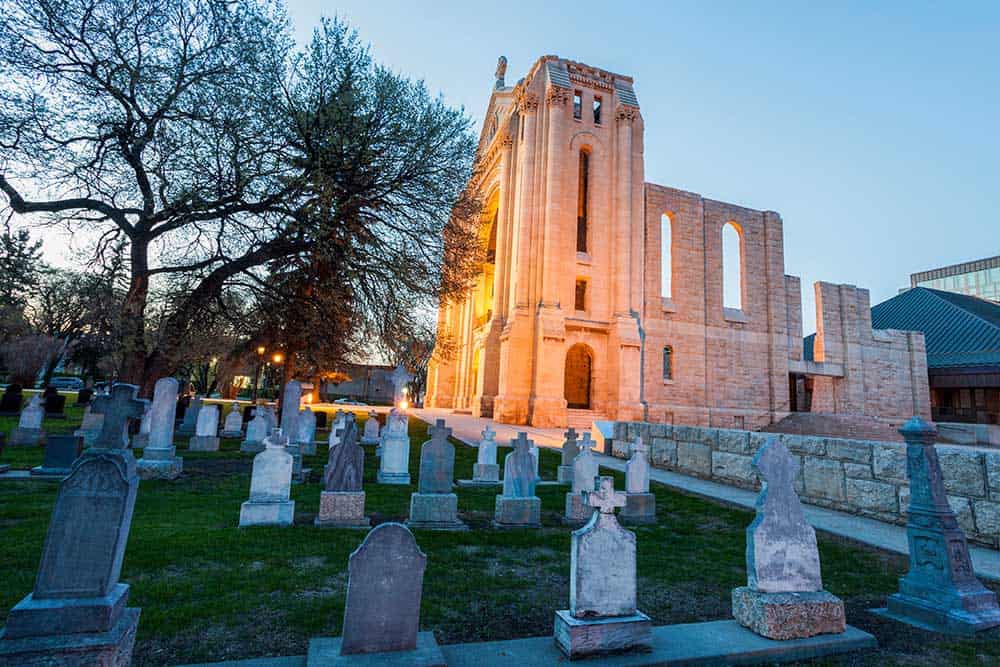 The neighbourhood is famous in Canadian history. Saint Boniface was the birthplace of Louis Riel, the Métis leader of the Red River Rebellion. This important event paved the way for Manitoba becoming a province within newly confederated Canada.

With more than 35 heritage properties, Saint Boniface is one of the best places for sightseeing in Winnipeg. Wandering around the French Quarter, keep on the lookout for its top attractions. Slip into the beautiful Cathédrale de Saint-Boniface and St. Boniface City Hall. Culture lovers will enjoy visiting Le Musée de Saint-Boniface Museum, the oldest building in Winnipeg.

Hockey and Canada go together like peanut butter and jelly. And if you happen to visit Winnipeg during hockey season, you simply need to catch a Winnipeg Jets game at Bell MTS Place. 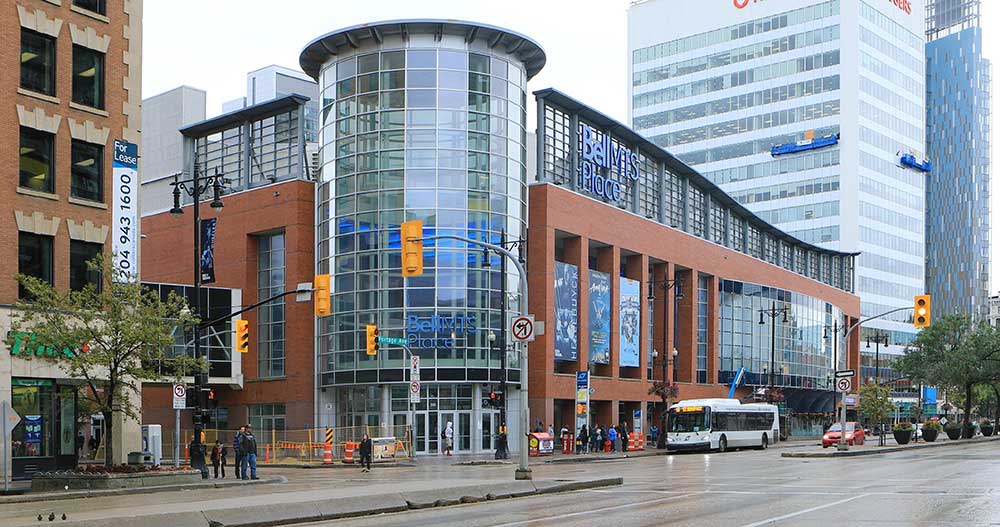 Like most Canadians, Winnipeggers are a tad crazy about their hockey.

The Jets’ Stanley Cup playoff hopes have often been dashed early in recent seasons. Either way, plan your trip to Winnipeg around the NHL playoffs. And if they’ve qualified, strap in. You’ll be in for once-in-a-lifetime chance to join in a “Winnipeg Whiteout” as the entire arena dons a white jersey or shirt and go wild for their team.

Where to stay in Winnipeg for sightseeing

While it sits among the top ten biggest cities in Canada, choosing where to stay in Winnipeg isn’t difficult. The downtown area, including The Exchange District and The Forks, is a great place to start your accommodation search.