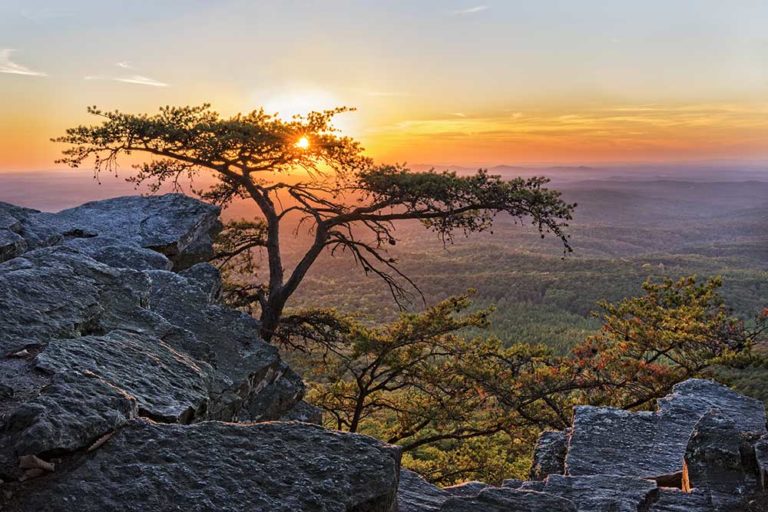 From its Confederacy days to the struggle for Civil Rights in the 1960s, Alabama has long been one of the most important states in American history. Wearing its rich history on its sleeve, this beating heart of the Deep South is one of the most underrated travel destinations in the United States.

History buffs will find plenty to keep them excited in Alabama. Got a penchant for the Old South? You’ll love retracing the steps of the Civil Rights Movement in the capital city of Montgomery or marveling at beautiful antebellum homes in Birmingham. Or if modern American history and science are more your jam, bring the gang to the incomparable U.S. Space and Rocket Center in Huntsville to learn all about NASA’s space programs.

Looking for a more laid-back Deep South vacation? Revel in the natural beauty of Alabama’s Gulf Coast, letting the waters of the Gulf of Mexico lap your toes on the state’s finest white-sand beaches around Gulf Shores, Orange Beach, and Mobile.

Ready to plan the ultimate Alabama trip itinerary? Get started with this quick & easy Alabama travel guide, chock-loaded with advice on where to go, what to see, and when to visit.

Where to go in Alabama

There’s no better place to launch your first Alabama itinerary than Birmingham, the state’s second-largest city and its most popular urban travel destination. The charming Southern city found its stride as one of the most important industrial centers of the Deep South, with its booming iron mining and steel industries. 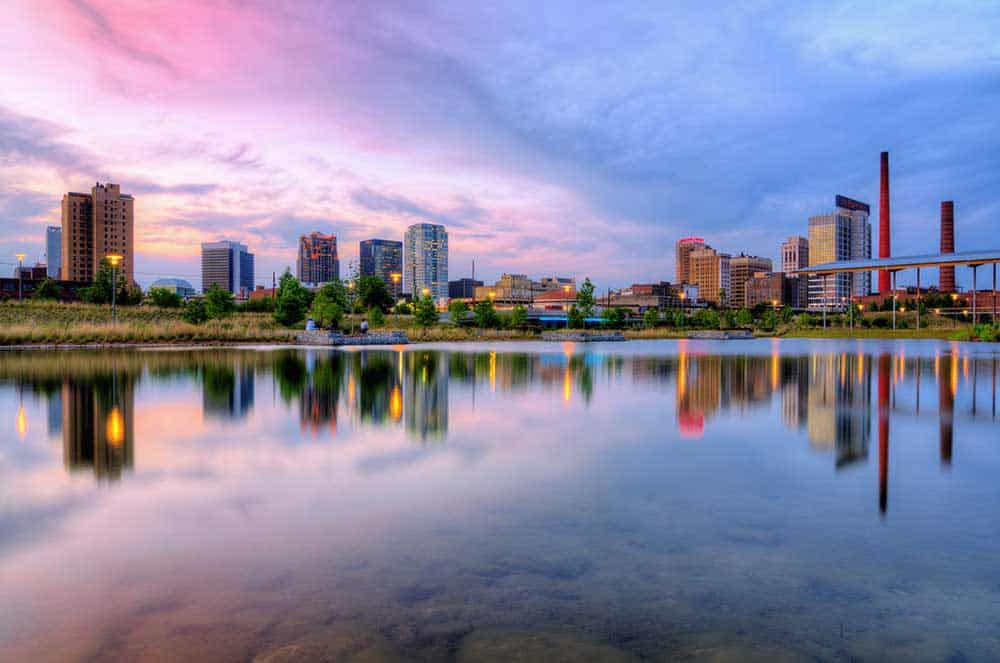 Birmingham has since moved past its industrial roots to become one of the South’s most interesting hubs for arts & culture. Today, the city teems with superb restaurants & bars, cool cafés, art galleries, and up-and-coming craft breweries.

Magic City’s modern proclivities aren’t with a historic edge either. On the streets of Birmingham, the past comes to life. History buffs will love tracing the history of the American Civil Rights Movement at the Birmingham Civil Rights Institute. This famous museum is one of the country’s most important institutions of its ilk.

Ready to plan your trip to Birmingham? Get started with these travel resources:

Searching out Alabama’s finest coastal pleasures? Jet down to Gulf Shores, one of the state’s most popular tourist destinations. Located on the beautiful Alabama Gulf Coast, the seaside city is the perfect vacation spot. Gulf Shores teems with pristine beaches, nature reserves, amusement parks, and other family-friendly attractions. 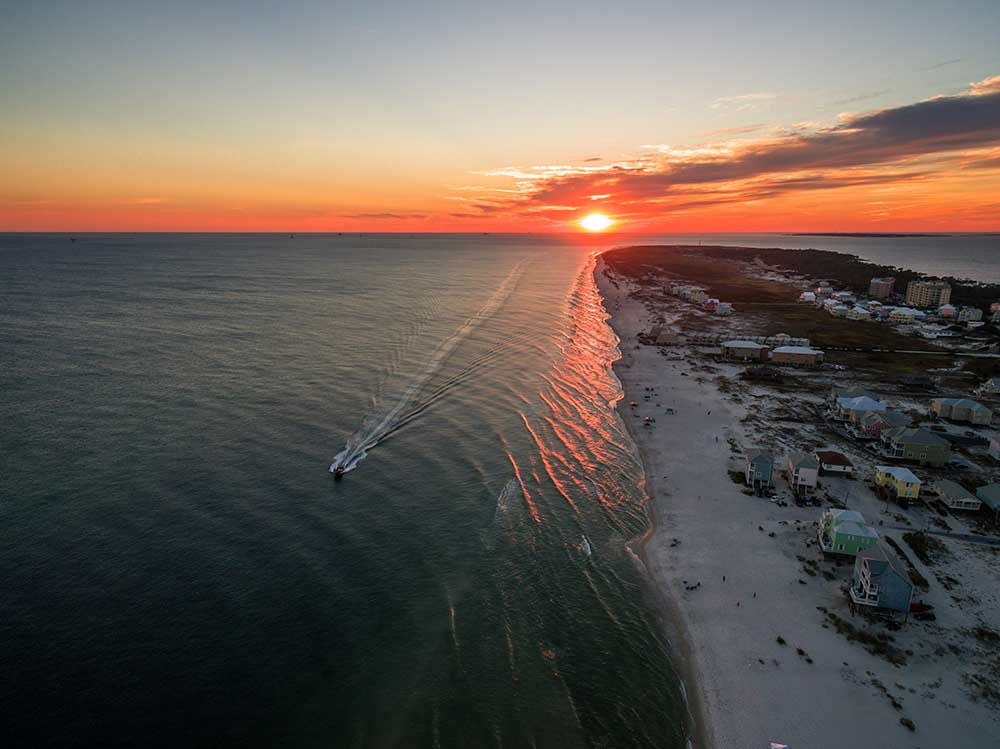 Animal lovers will never be bored scooting around Gulf Shores. Take the kids to the Alabama Gulf Coast Zoo to get up close to exotic animals like lemurs, sloths, and kangaroos. For wilder encounters, navigate the coastal forests of Bon Secour National Wildlife Refuge to see migratory sea birds and sea turtles in their natural habitat.

Of course, the real draw to Gulf Shores is its white-sand beaches. Slide along its shores to enjoy everything from the buzzy Gulf Shores Main Public Beach or the “wilder” 2-mile stretch of sand at Gulf State Park.

Ready to plan your trip to Gulf Shores? Get started with these travel resources:

Since overtaking Birmingham as Alabama’s biggest city, Huntsville has snuck its way onto the radar of travelers circling the Deep South.

Much of Huntsville’s reputation among wayfarers revolves around its U.S. Space and Rocket Center, one of the state’s most interesting tourist attractions. If you’re visiting Alabama with your family, it’s among Alabama’s must-sees. 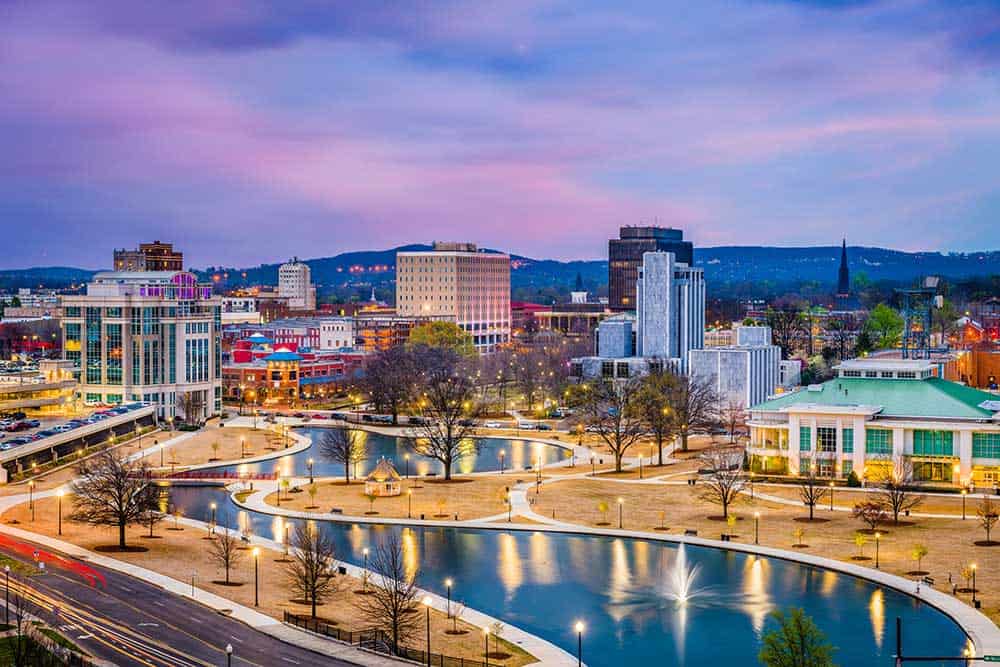 But there’s more to “Rocket City” than its association with NASA’s space programs. Huntsville offers travelers a superb mix of activities, from admiring the permanent & temporary exhibits at the Huntsville Museum of Art to enjoying natural attractions like the Madison County Nature Trail.

No visit to Alabama is complete without venturing to its capital city: Montgomery. Although lesser-known as a travel destination, Montgomery is among the most important cities in modern American history. Its streets are regarded as the birthplace of the Civil Rights Movement, providing the backdrop for Rosa Parks’ famed Bus Boycott and Martin Luther King Jr.’s congregation. 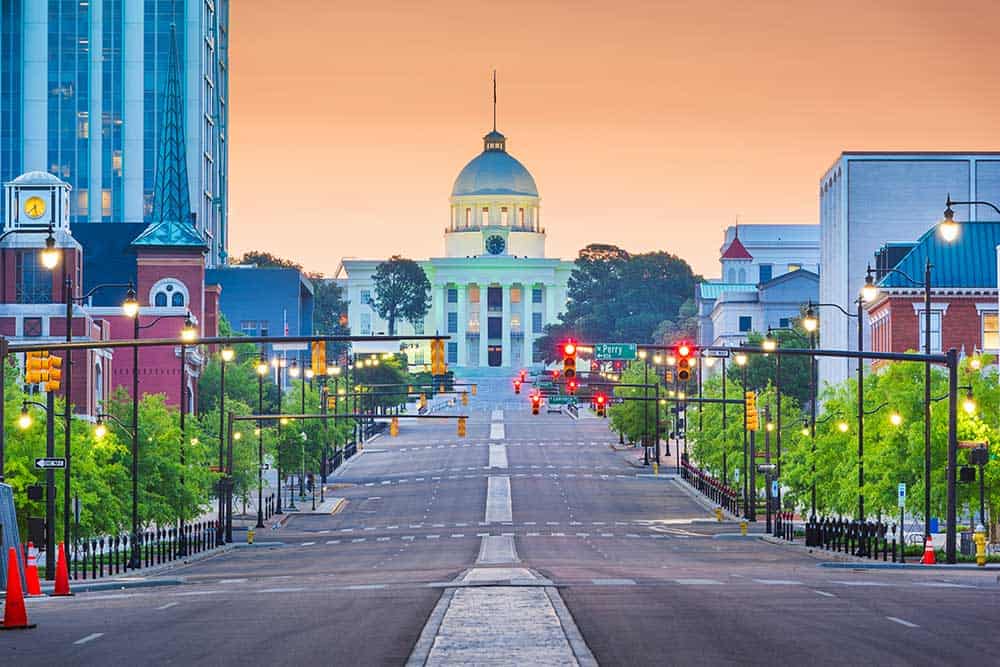 Besides delving into the city’s Civil Rights history, visitors can browse fine American and African art at the Montgomery Museum of Fine Arts, marvel at stunning architecture like the Alabama State Capitol, or relax on a riverboat cruise along the Alabama River.

Traveling along Alabama’s Gulf Coast? Squeeze in a stop in Mobile. Located on Mobile Bay, the coastal city offers visitors a taste of the rich history of the Heart of Dixie, with military forts, plantations, naval ships, and historic homes scattered about the city.

Military history buffs won’t miss a glimpse at the USS Alabama battleship and the USS Drum submarine, dating back to WWII. Or admire Mobile’s lovely architectural palette by checking out historic houses like Oakleigh House Museum or the Bragg-Mitchell Mansion. 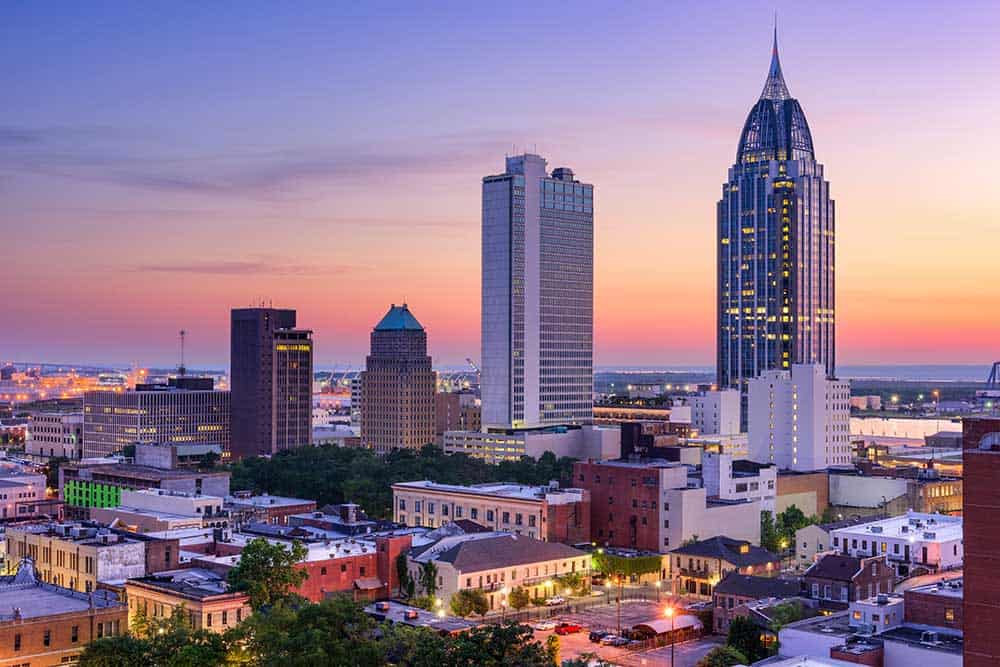 To add a little spice to your Alabama trip, try to time your visit with Mobile’s famed Mardi Gras festival. Surprisingly, the city’s Mardi Gras festivities are the oldest in the United States, pre-dating the far more famous celebrations in New Orleans.

Ready to plan your trip to Mobile? Get started with these travel resources:

Looking for more opportunities to hang out on Alabama’s white-sand beaches? Pack up the kids and venture over to Orange Beach. Located just east of Gulf Shores, the small Gulf Coast city is known for its lovely stretch of sugar-sand coastline and family-friendly vibes. 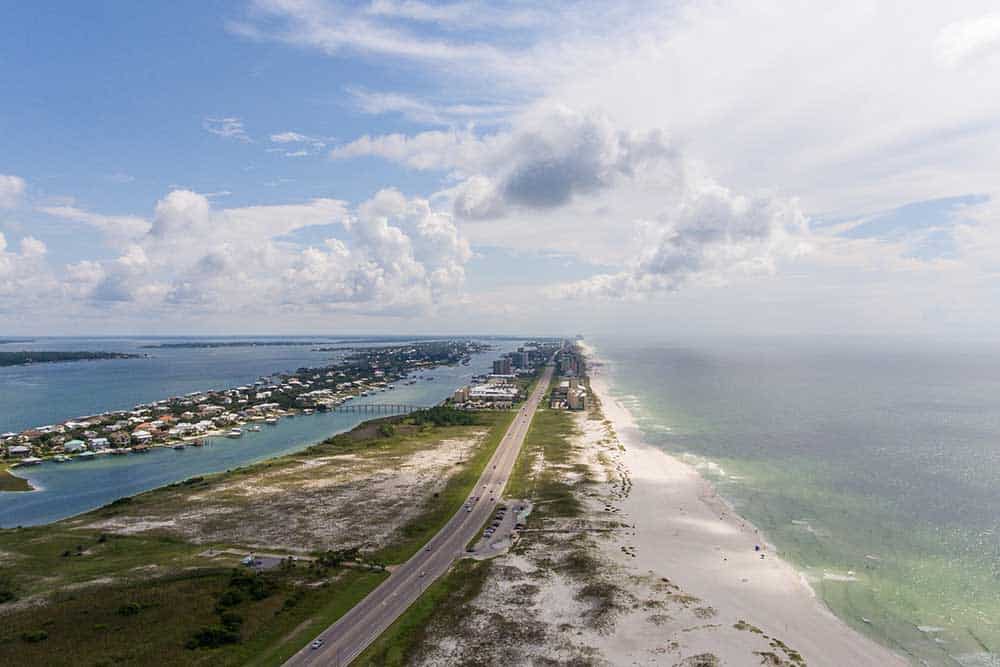 Wedged between Orange Beach and Gulf Shores, Gulf State Park is one of the area’s top attractions for nature lovers. Aside from chillin’ on its serene beaches, travelers can venture island to tackle its hiking trails or cast out a line on its famed fishing pier.

At the end of the day, bring the whole gang over to The Wharf. The waterfront open-air entertainment area offers some of the best shopping & finest dining experiences on the Alabama Coast.

Ready to plan your trip to Orange Beach? Get started with these travel resources:

Other destinations in Alabama

When to visit Alabama

The best time to visit Alabama is in the spring between mid-March and late May. During the spring months, the weather is near its most pleasant. You’ll enjoy comfortable temperatures that are perfect for enjoying the state’s top outdoor activities, including hiking or golfing at the famed championship golf courses along the Robert Trent Jones Golf Trail. 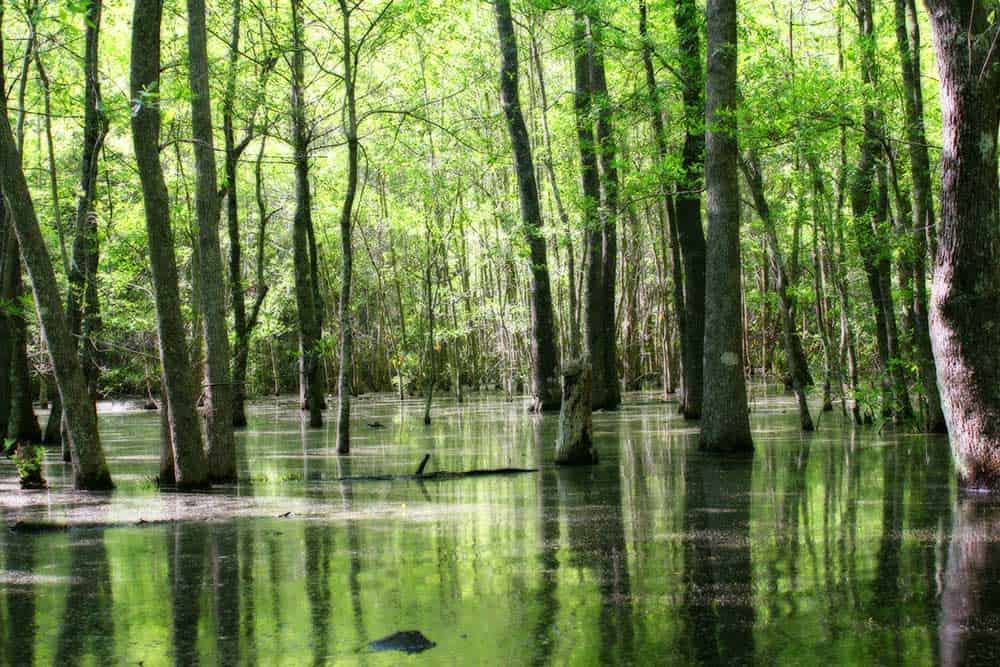 The tourism high season in Alabama falls in the summer months between June and August. With the higher tourist crowds, higher prices, and hot & humid weather, it’s not the most pleasant season to travel around the state.

Fall is another excellent time to travel around Alabama. Like in spring, autumn temperatures are mild to moderate, making it a great time to partake in outdoor adventure.

How to get to Alabama

Alabama is home to just two major airports, serving mostly flights from other domestic US destinations:

Alabama is well-connected by road to the neighboring states of Florida, Mississippi, Georgia, and Tennessee. Popular road routes into Alabama include: