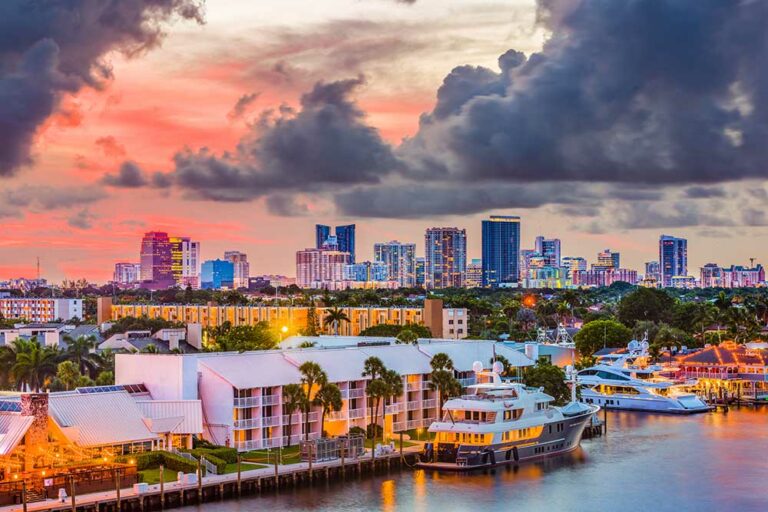 Wandering around South Florida? Carve out time in your itinerary to explore Fort Lauderdale! Hemmed into Florida’s Atlantic Coast between Miami and West Palm Beach, the sunny city of Fort Lauderdale is one of the Sunshine State’s most popular travel destinations.

Laze on beautiful beaches like Fort Lauderdale Beach or soak up nature in outdoor destinations like Hugh Taylor Birch State Park. Roam around the city center, marveling at Lauderdale’s riverside charms on the banks of the New River along the Riverwalk. Explore the Intracoastal Waterway canals that bestowed the nickname the “Venice of America” upon the city. Or spend an afternoon ducking into art galleries and high-end shopping boutiques along glitzy Las Olas Boulevard.

Ready to plan out your Lauderdale adventure? Get started with this quick & easy Fort Lauderdale travel guide, including what to see & do, where to stay, and when to visit!

Looking for more ideas for your trip? Check out our Florida Travel Guide for more recommendations on when to visit, where to go & what to do!

What to see & do in Fort Lauderdale 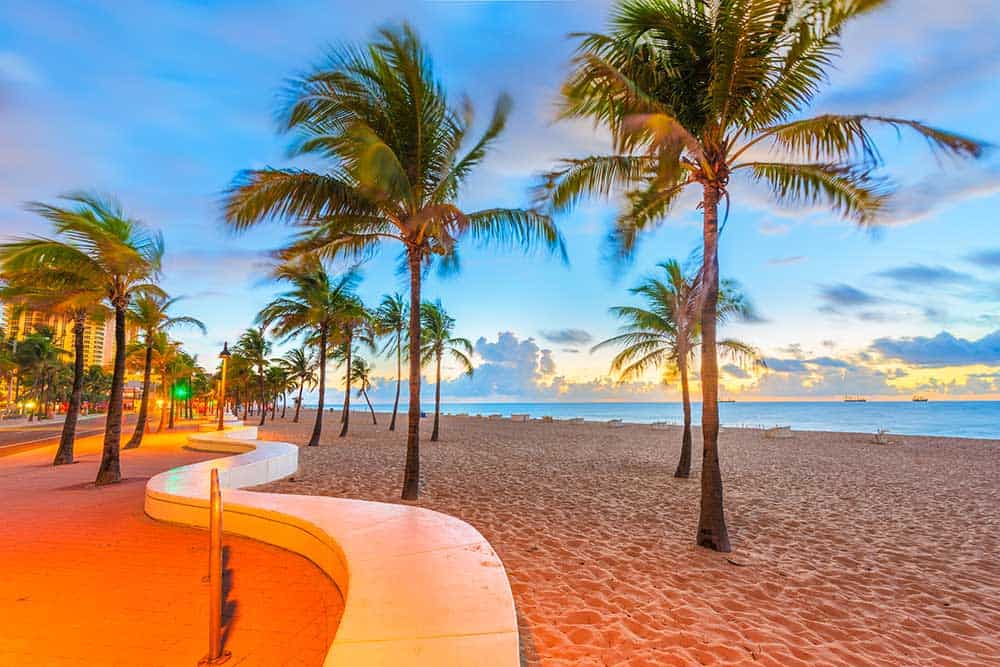 Lazy on the sandy beach with a book in hand or take the crystal-clear water to cool down in the hot South Florida sun. There’s also a handful of fun activities at Fort Lauderdale Beach, including basketball courts, volleyball courts, and a children’s playground.

When you’re done gazing upon the waters, drift over to nearby Seabreeze Boulevard to sample delicious food from some of Lauderdale’s finest restaurants, from Mexican-Floridan fusion tacos to Southern comfort food.

Thought a Fort Lauderdale vacation started and ended with its Atlantic shores? Prove yourself wrong by meandering up to Hugh Taylor Birch State Park. Located off of East Sunrise Boulevard north of Central Beach, this 180-acre state park offers nature lovers an array of outdoor activities. 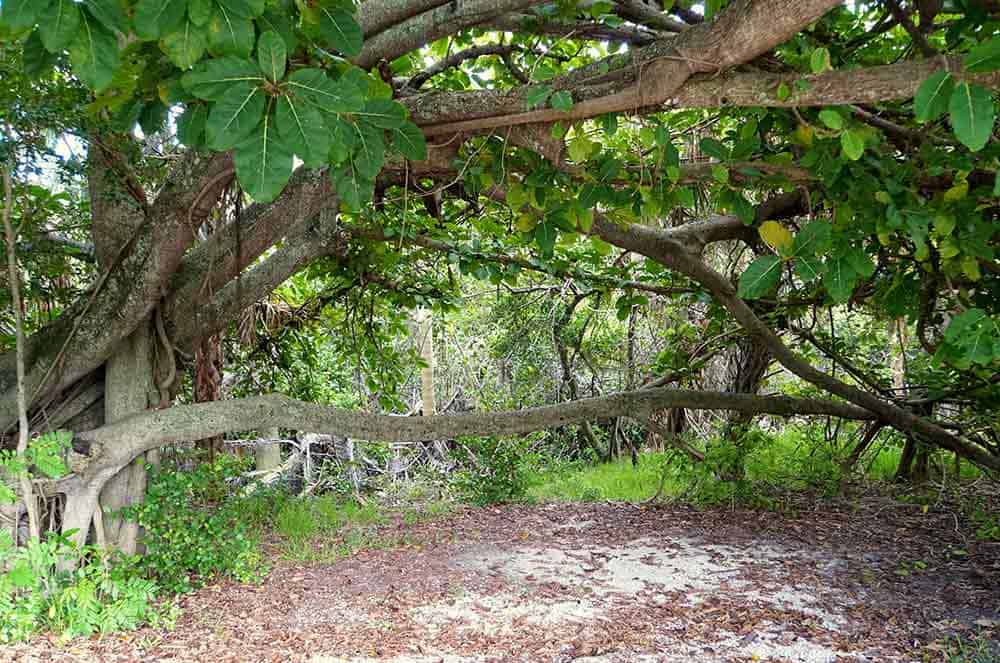 Start your visit to Hugh Taylor Birch State Park on the hiking trails, soaking up its wildlife under the shade of oaks and palm trees. Take your exploration to the next level by renting a canoe or kayak and drifting along the park’s waterways.

After a day of outdoor adventure, grab a bite at Park & Ocean, the state park’s own on-site restaurant and bar. Savor its delicious appetizers and sip craft beer under the tree canopy, as you listen to the waves crashing onto the Atlantic shoreline.

The city’s riverside charms come to the fore at the beautiful Riverwalk Fort Lauderdale. Snaking along the New River in Downtown, the mile-long riverfront walking path puts many of the best things to do in Fort Lauderdale at your fingertips. 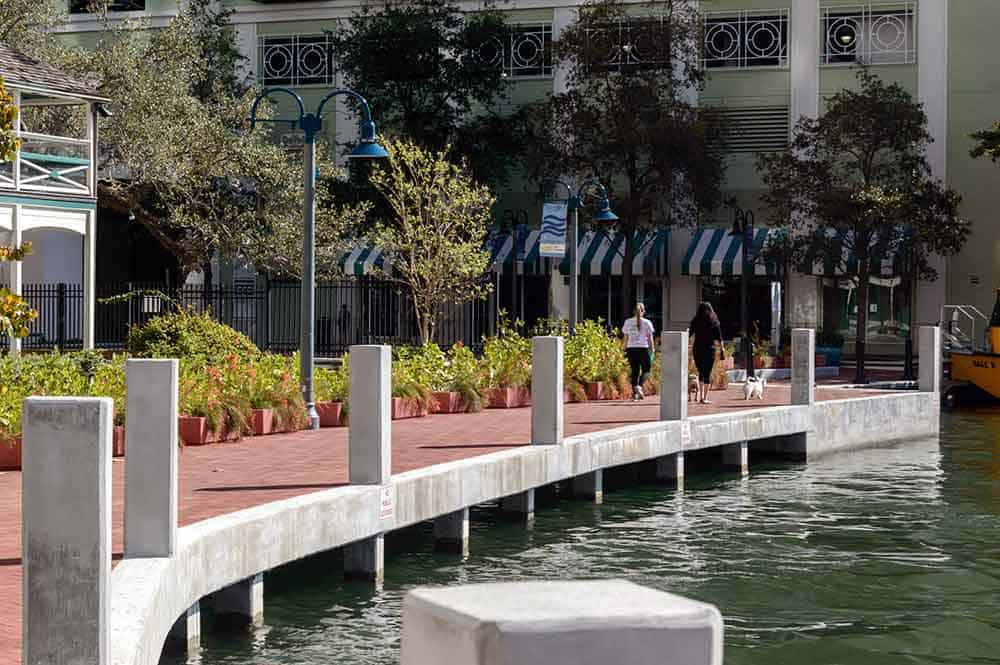 Admire the tropical landscape along the Riverwalk Fort Lauderdale, ducking into boutique shops along the way. After you’re done with your sightseeing adventure, pull up a chair at one of its waterfront restaurants & bars. Relish delicious food, craft beer, and cocktails to beautiful views over the river.

Need to indulge in a little retail therapy on your South Florida adventure? Meander along Las Olas Boulevard, the city’s top shopping & dining destination. The avenue runs between Fort Lauderdale Beach in the east to the Central Business District, passing alongside the canals of the Intracoastal Waterway. 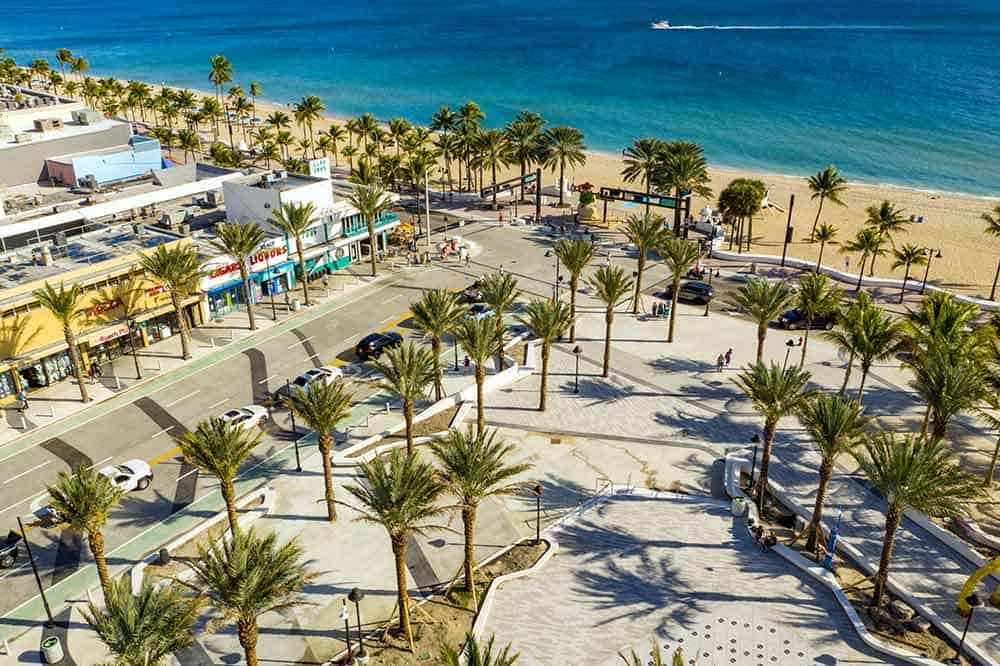 Stroll along Las Olas Boulevard as independent shops and high-end fashion boutiques beckon you to empty your wallet. Slide into one of the art galleries along the strip to admire the work of local artists.

Built up an appetite? Sneak into one of the many restaurants, bars, and lounges along Las Olas Boulevard for a delicious meal, glass of wine, or cocktail.

Want to escape the city? Set aside time to explore Flamingo Gardens, just 25 minutes southwest of the city. Comprising a botanical garden and wildlife sanctuary, the 60-acre park is one of the best day trips from Fort Lauderdale. 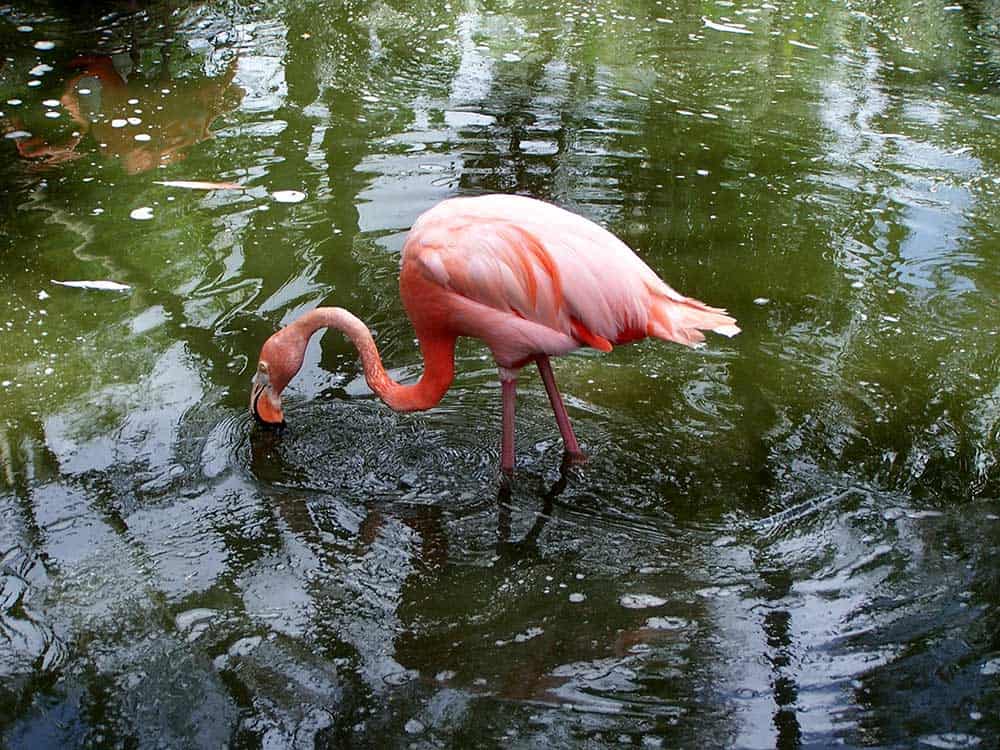 To get the most out of your Flamingo Gardens visit, hop onto a free 25-minute tram tour, digging into the entire park.

As one of the most popular destinations in Florida, there are a ton of choices for where to stay in Fort Lauderdale. Most travelers would do well to stick to the areas & neighborhoods around the city center, including:

The best time to visit Fort Lauderdale is between December and April. Visiting during the spring and winter months offers travelers warm temperatures and sunny skies, without the intense heat & humidity of the summer. 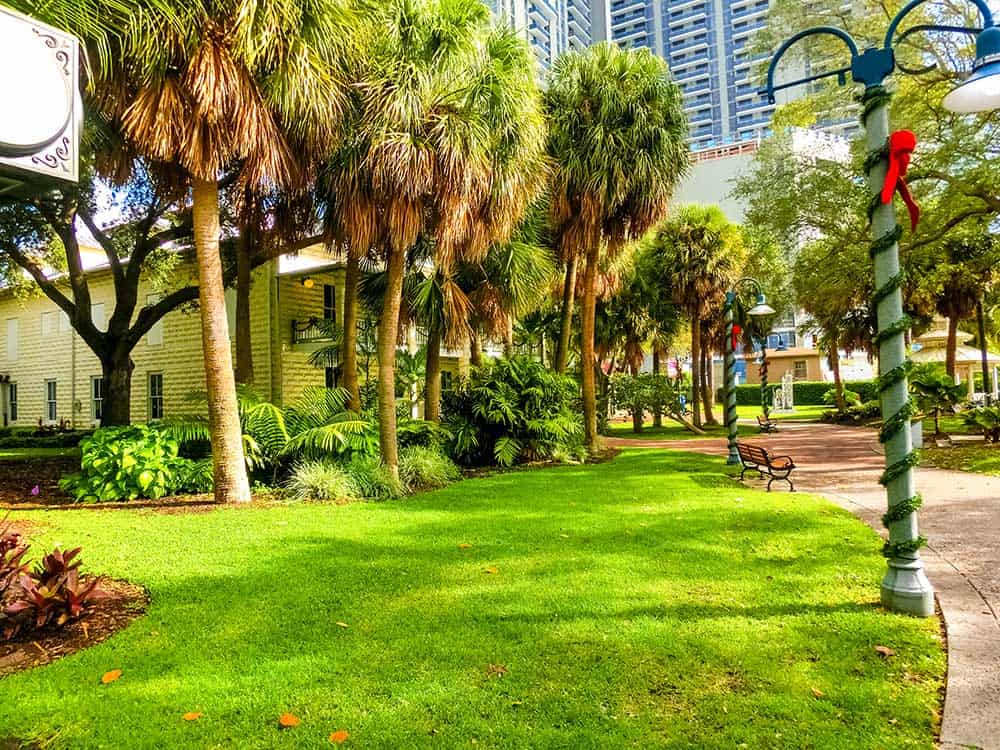 If you decide to travel in spring and winter, keep in mind that these months fall within the peak tourist season. Expect larger crowds, less accommodation availability, and higher prices.

Florida’s official hurricane season runs between June and November, peaking in September. If you decide to visit Lauderdale during these months, be sure to keep on top of news reports ad pack accordingly.

Fort Lauderdale is well-connected by road to other cities in Florida. Popular driving routes to/from Lauderdale and estimated driving times include:

Unlike Miami to the south, the best way to get around Fort Lauderdale is by car. Driving your own vehicle will let you explore beyond the city, including tackling other nearby popular South Florida destinations like Hollywood, Pompano Beach, and Dania Beach.

Even more fun for getting around, however, is to ride around on the city’s famous water taxis. The water taxi has 11 different stops along the Intracoastal Waterway and New River. You can even travel as far south as Hollywood! Day passes cost $35 for adults and $15 for children (5-11), and run from 10 am to 10 pm. 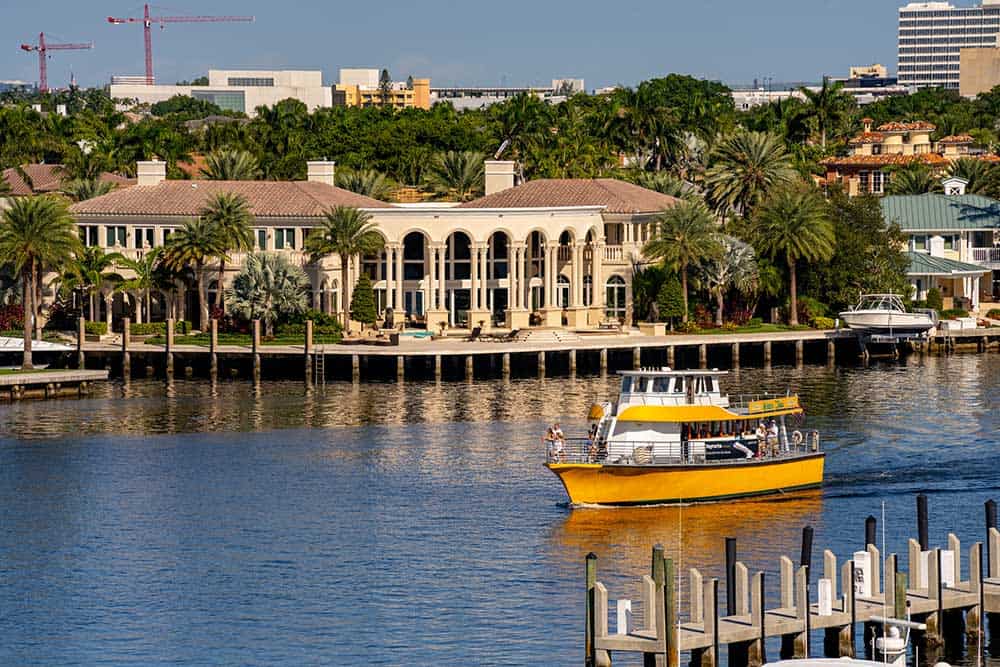