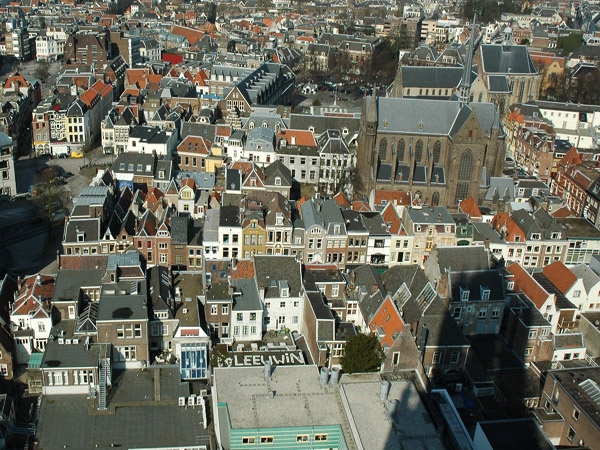 The Netherlands is home to many fascinating cities, yet most visitors never seem to go past Amsterdam. If you’re looking to explore further afield, a short 25-minute train ride will take you directly to Utrecht. With 2000 years of history to draw from, Utrecht is a fascinating city, blending ancient history with modern entertainment. This university city always has something going on, from the summer Goth festival to the animation film festival. Best of all, as soon as you step out of the train station, you’re right in the old city center.

Don’t bother renting a bicycle in Utrecht if you’re staying in the city center. It’s not worth the hassle, especially since it takes just 15 minutes to walk from one side of town to the other. But don’t let that short walk fool you. In between, there’s enough to keep you busy for days. However, if you’re only going to stay for one day in Utrecht, here are just a few of the many sights to see. 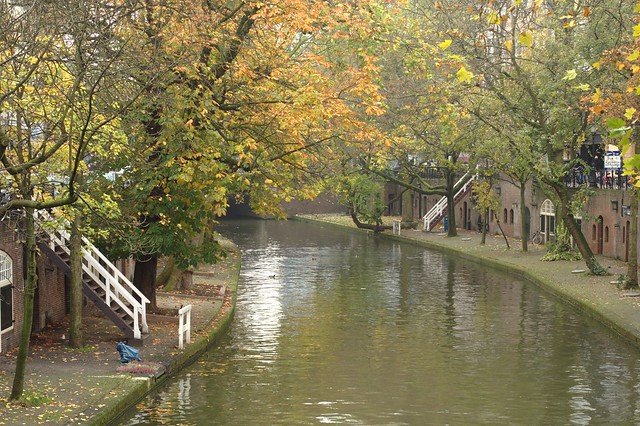 Utrecht’s Oudegracht and Nieuwegracht canals are unique to the city. What were originally wharves and cellars are now water-level terraces, restaurants and shops nestled beneath the historic city streets. The Oudegracht is the oldest and most popular of the canals, with numerous restaurants and bars serving food and drink right on the water’s edge. Just be careful when you stand up; numerous chairs have ended up toppling into the canal and probably a few tipsy tourists have, as well.

One of the more unusual spots to enjoy lunch, dinner, or just a drink right by the canal is Oudaen, one of the old city castles that is now a restaurant and a brewery. You can dine inside or sit on their canal-side terrace enjoying one of their non-filtered wheat beers, while the castle soars above you.

As you move up from waterside to streetside along this arm of the Rhine River, you’ll find an appealing mix of stores selling everything from fashion and homegoods to board games and second-hand goods. As you walk south along the Oudegracht, glance to your right when you hit Haverstraat, but don’t panic! The UFO sitting on top of the ProRail building at the end of the street isn’t real. It’s just an art installation from 2000 that they decided to keep. Or so they claim. 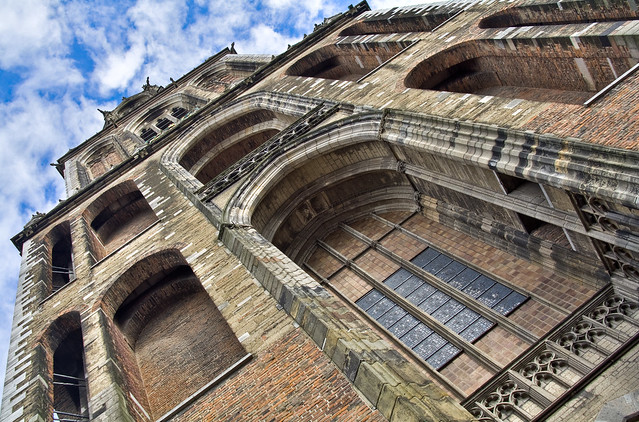 As impressive as a UFO may be, it plays second fiddle when it comes to fascinating rooftop sightings. Towering over the UFO and the rooftops of the city is the Domtoren, the tallest bell tower in the Netherlands. Built in the 1300s and standing 112.5 meters (368 feet) high, it provides some of the most stunning birds-eye views of the city. If you’d like to climb the tower – all 465 steps – you can make a reservation at the Utrecht Tourist Information Office located in the same square as the tower. 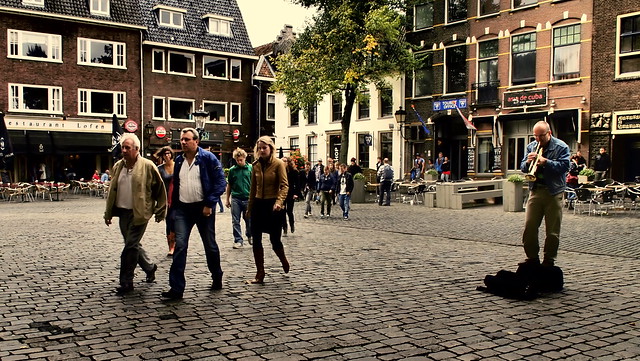 While you’re down in the Domplein, as the square is known, take a look at the Gothic cathedral next to the tower. It’s rather unique, in an unintended way. The cathedral, built in the French Gothic style, is now only half a cathedral. Although built in the full traditional style, a storm came through in the late 1600s and knocked down half of it and it was never rebuilt. All that remains is the transept and the apse. However, it’s still a fully functioning cathedral, with weekly choir concerts.

Attached to the cathedral is the Pandhof, a cloistered garden area offering a quiet oasis amid the bustle of the city center. On the other side of the Domtoren is Flora’s Hof, another walled garden that’s a nice spot to sit and eat some pataat oorlog (fries served with mayonnaise and peanut sauce) picked up from one of the nearby shops, while enjoying the hourly chiming of the Domtoren’s bells. As you wander through the Domplein area, stop to consider that the Romans built a fort in that very spot in 47 AD, and it’s been inhabited ever since. 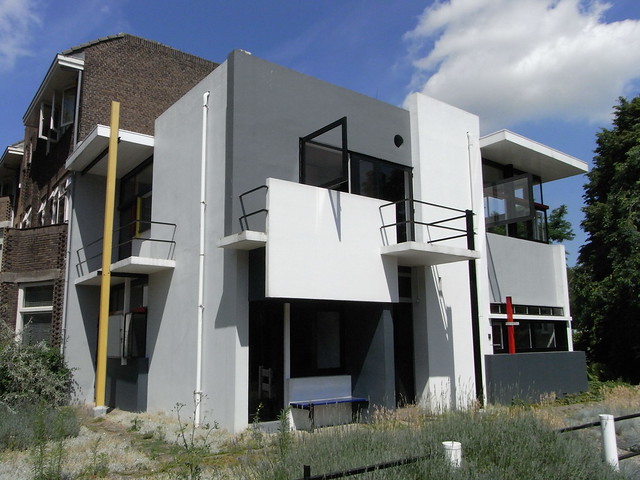 It’s not all Gothic churches and Roman forts, though. Utrecht offers contemporary sites of interest, including the Rietveld-Schröder House, one of the UNESCO World Heritage sites and one of the top attractions in Utrecht.

This world-renowned example of modern architecture sits just outside the city center and was designed by Utrecht architect and designer, Gerrit Rietveld. If you decided to take a tour of the Centraal Museum, you can also schedule a guided tour of the house, famous for its sliding walls and primary colors.

If you’re travelling with kids, or are simply a kid at heart, you might be interested to know that Utrecht is also the birthplace of the children’s book rabbit, Miffy, or as the Dutch call her, Nijntje. The Dick Bruna House, named for her Utrecht-born creator, is just across the street from the Centraal Museum and offers lots of colorful and interactive displays for kids. There’s also the NijntjePleintje, a square located just off the northern end of the Oudegracht that features a statue of the famous bunny. 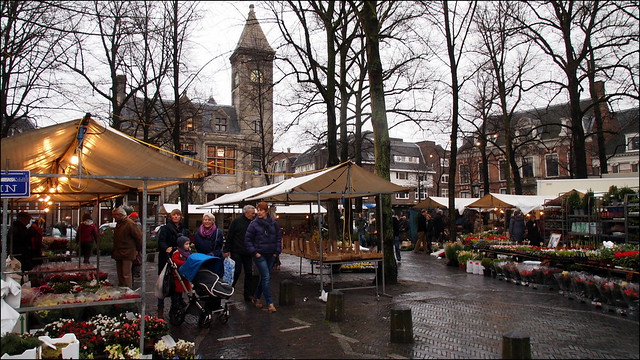 One of the more unusual sites to see in Utrecht is one that people may pass every day and not notice. In the Janskerkhof square, next to the statue of Anne Frank, there are number plaques placed in a semicircle on the ground, surrounding a rectangular plaque with the months of the year. If you stand on the center line, next to the current month – and if the sun is shining – you become a human sundial and can tell the time!

When the sun goes down, Janskerkhof transforms from a sundial to a light art installation. In fact, there are light art installations throughout the city, all part of the Trajectum Lumen project. You can wander the city on your own, following the glow-in-the-dark map available for free at the tourist office, or you can take a guided tour of the light displays every Saturday night. Some are as simple as illuminated bridge arches, while others are complex, computerized light animation.

The lights are located throughout the city, so you can always check some of them out, and then take a social pause at one of the fantastic bars and cafés offering everything from Middle Eastern elegance to traditional brown cafés. If you’re in the mood for Belgian beer in a quirky setting, check out Café Olivier, located near the Hoog Catharijne shopping center and the train station. They offer an almost overwhelming selection of Belgian beers, along with food and other drinks, all housed in a former church. It’s a great last stop in Utrecht before catching your train for the next stop on your Dutch journey.