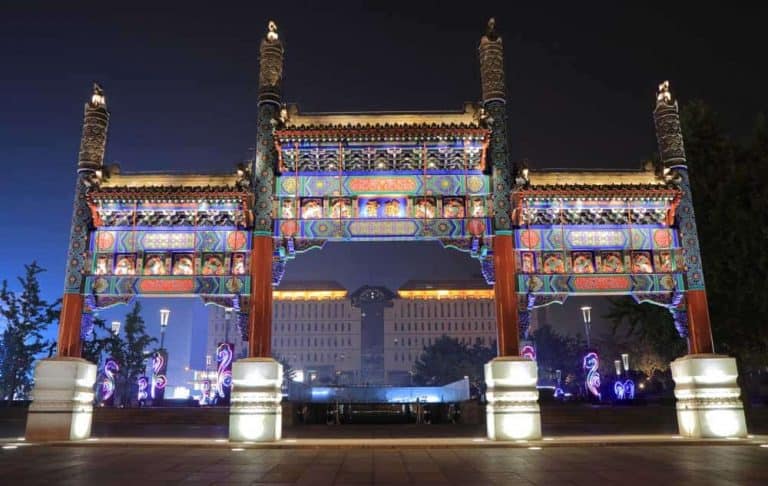 Beijing, the capital and one of the most interesting travel destinations in China, has a history that stretches back over three millennia, but it’s firmly focused on the future.

The skyline and culture are constantly getting reinvented. That doesn’t mean Beijing’s forgotten its past. The city alone has 6 amazing UNESCO World Heritage sites along with a handful of other incredible attractions.

As most attuned foodies would gather, the food and restaurant scene in Beijing remains firmly focused on tradition. Of course, deciding what to eat in Beijing is no easy task thanks to the diversity of the local cuisine.

From Sichuan-style crayfish to Mongolian lamb, Beijing has a fusion of cultures. The city also has its own staples such as Peking duck or shredded pork in Beijing sauce.

Are you getting a little hungry? Get ready for your stomach to growl with this Beijing food guide…

Peking duck originated in Beijing and has become the country’s national dish. Even if you’ve only got 24 hours in Beijing, you need to try this crispy, roasted duck at least once. It’s pumped with air and then coated in a sweet syrup before getting roasted for hours. 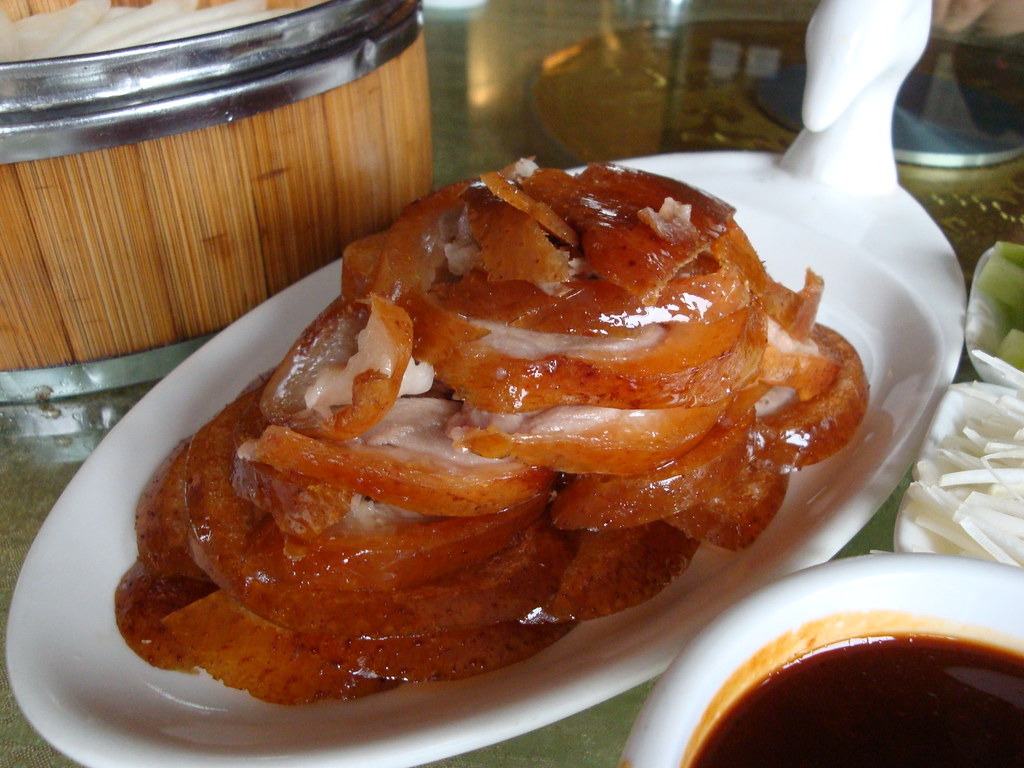 The duck comes out perfectly juicy on the inside and crispy on the outside. If you order it at a restaurant, the chef typically comes and cuts the roasted duck into thin slices. It’s served with savoury pancakes and a sweet bean sauce, along with cucumber and spring onion to help cleanse the palate.

You can find Peking duck just about anywhere in the city, but the most popular spot is Da Dong Roast Duck.

Jing Jiang Rou Si is a shredded pork dish fried in a sweet bean sauce that the locals call Beijing sauce. It’s often served on a bed of fresh leeks, helping to balance the sweet and spicy flavour of the pork.

When you order it from a market or street vendor, you’ll often get it wrapped in a dried tofu layer, making it more like a pulled pork sandwich. In some of the popular tourist areas, you can also find vegetarian options using fried tofu puffs as a substitute for the pork tenderloin.

If you want to try the shredded pork for yourself, Jin Ding Xuan Restaurant on Hepingli Street offers large servings at low prices.

Walk into any food market and you’ll find Nai Lao in the coolers. The cold, yogurt drink has a sweet flavour and is made from milk and rice wine sweetened with sugar or honey. The concoction is then left to ferment.

The result is a tangy yogurt that you can drink through a straw. It’s often sold in convenience stores and food markets and has become one of the more popular drinks in the city. Many vendors now sell it in disposable cups, but you’ll still find places that sell it in ceramic bowls.

If you purchase the drink in a ceramic container, make sure you return it. It’s not included with the drink.

You can’t visit Beijing without trying the traditional Chinese candy. Dragon’s Beard Candy is a sweet, chewy snack that almost melts in your mouth. 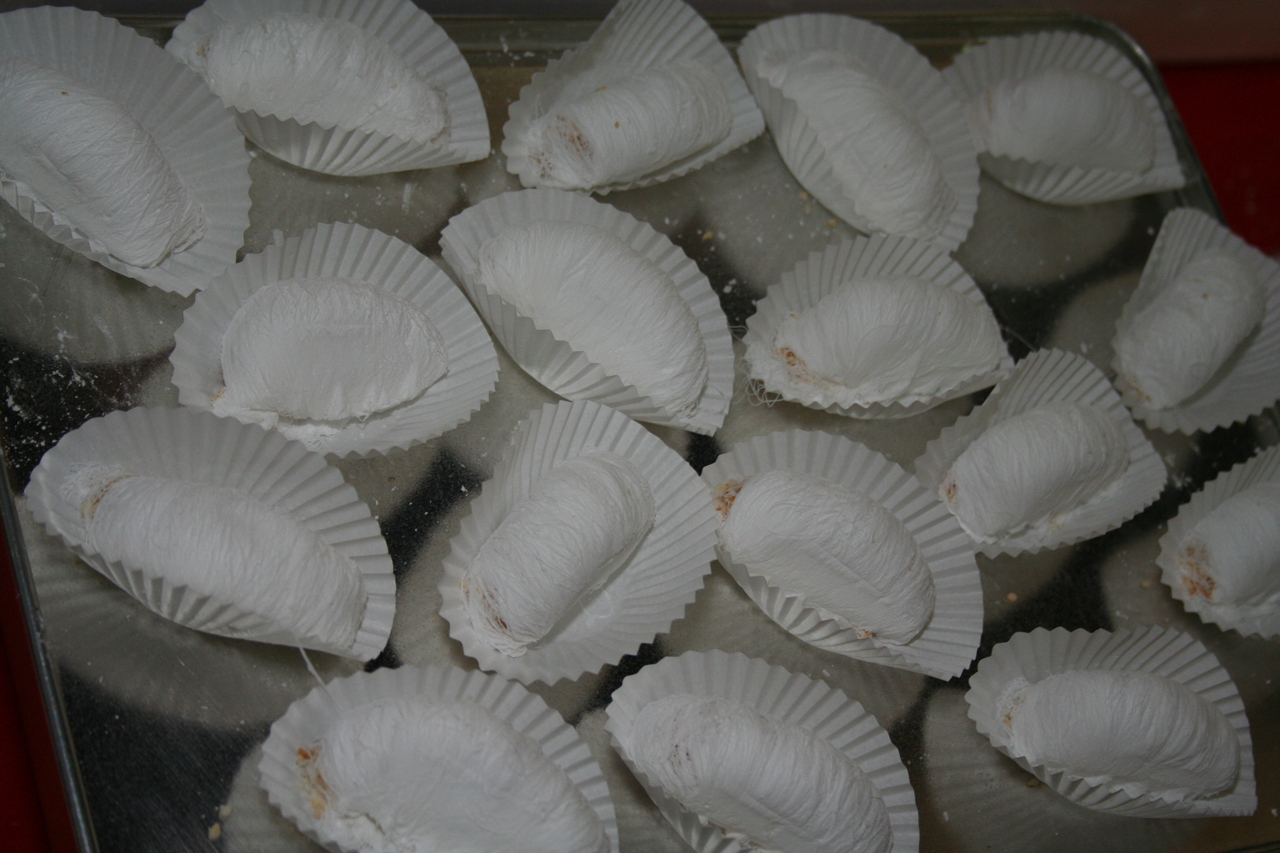 You’ll find street vendors throughout the city selling the popular snack. It resembles cotton candy, but has a different flavour. The fluffy, sweet treat only has about 19% sugar content compared to the 94% sugar found in cotton candy.

The history of the candy goes back over 2000 years, making it one of the oldest recorded confections. Making this distinct candy has almost become an art form. If you happen to see it being made, stop and watch as the candy maker stretches out the thread-like substance.

Another sweet treat, Aiwowo is made from rice balls covered in flour and filled with apricot, sesame, or white sugar. It resembles a round jelly-filled doughnut made from rice instead of dough. 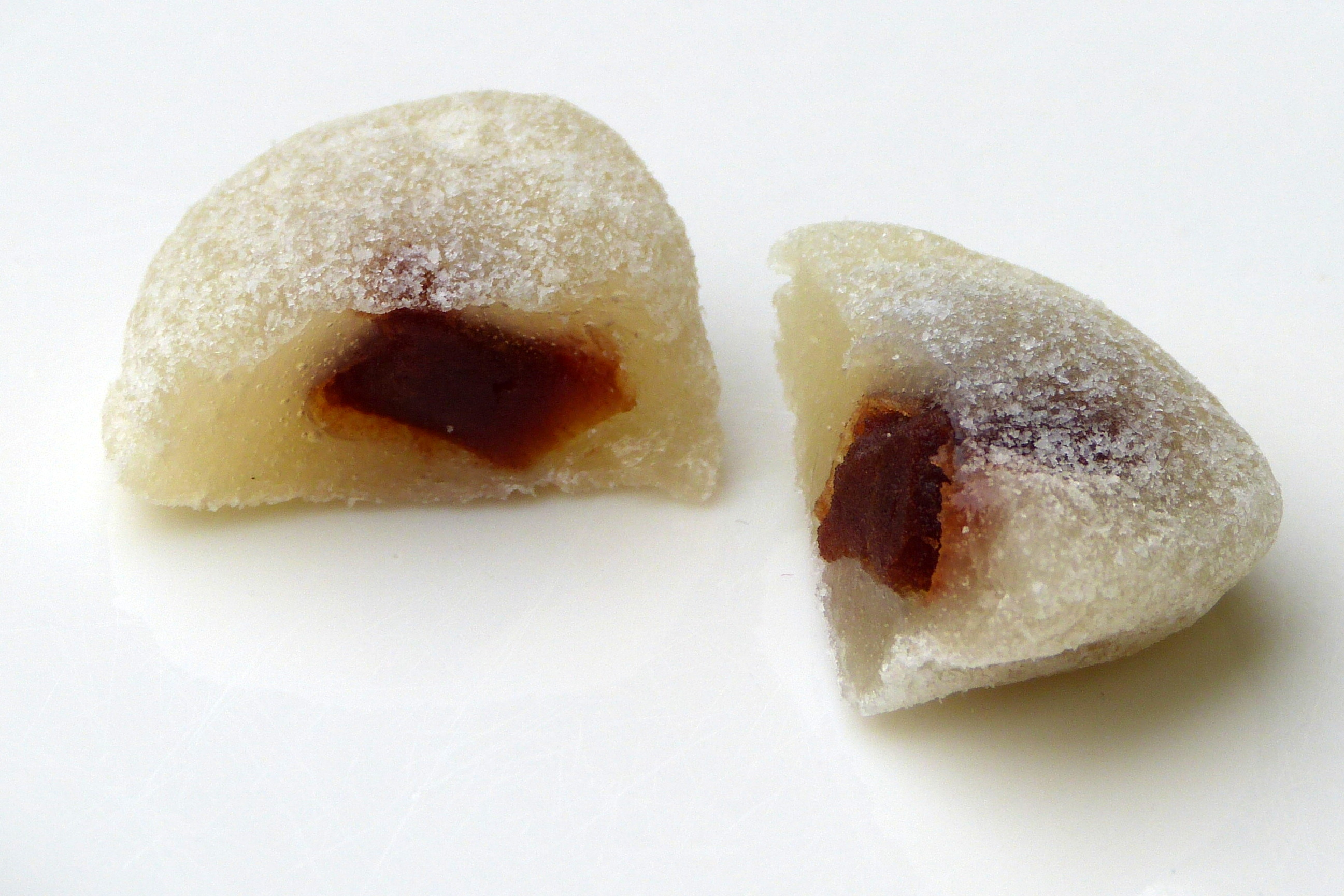 You can find it at various food stalls, markets, and snack shops. It’s also often packaged and sold at convenience stores, due to its long shelf life.

Some variations are more cone-shaped instead of ball-shaped and feature flakes of walnut kernel chips and sesame seeds coated in white sugar. It’s then topped with a small red spot.

To find the best Aiwowo in Beijing, travel to Huguosi Xiaochi. This snack-focused restaurant serves a wide range of treats, including sweet rice balls.

A staple of Beijing street food, Chinese egg crepe is a doughy meal served with cilantro, scallions, and a variety of savoury sauces. The locals call it jianbing and you’ll find stalls serving the fried crepe around the city, especially near the bar streets. 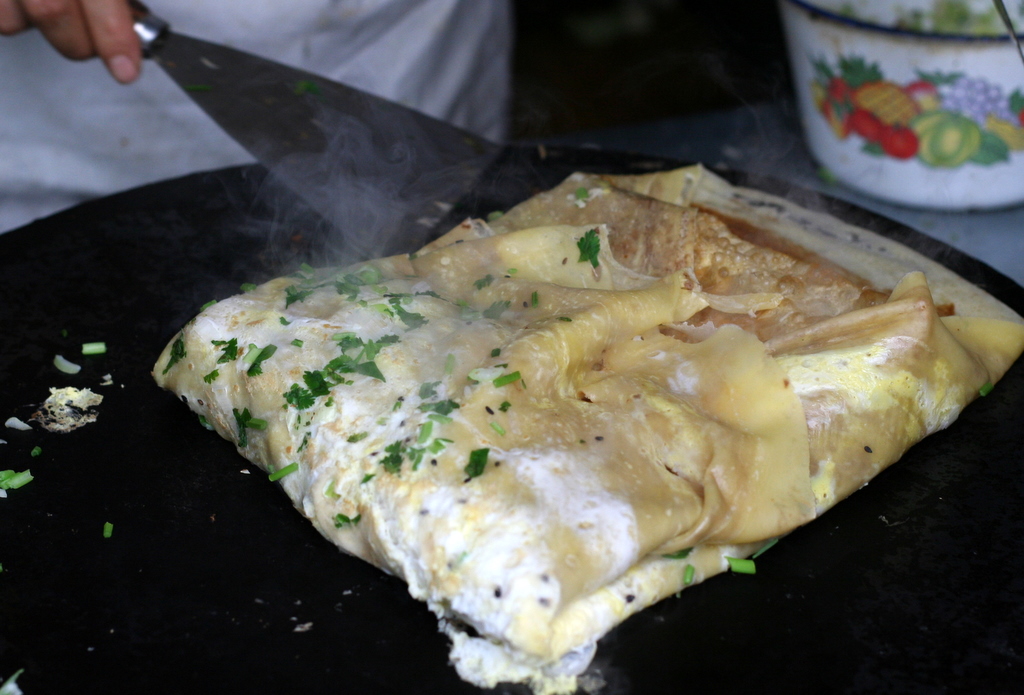 Cooks often prepare it on round grills, pouring a blob of doughy batter in the centre and spreading it with a flat stick. A few eggs are added, followed by a mixture of ingredients.

Thanks to the flat shape of the crepe, you can eat and walk at the same time, making it a perfect snack for the middle of your Beijing itinerary.

The Mongolian hot pot isn’t an original Beijing dish, but it’s become a wintertime tradition. You sit around a large pot of boiling broth and add various ingredients to a skewer. 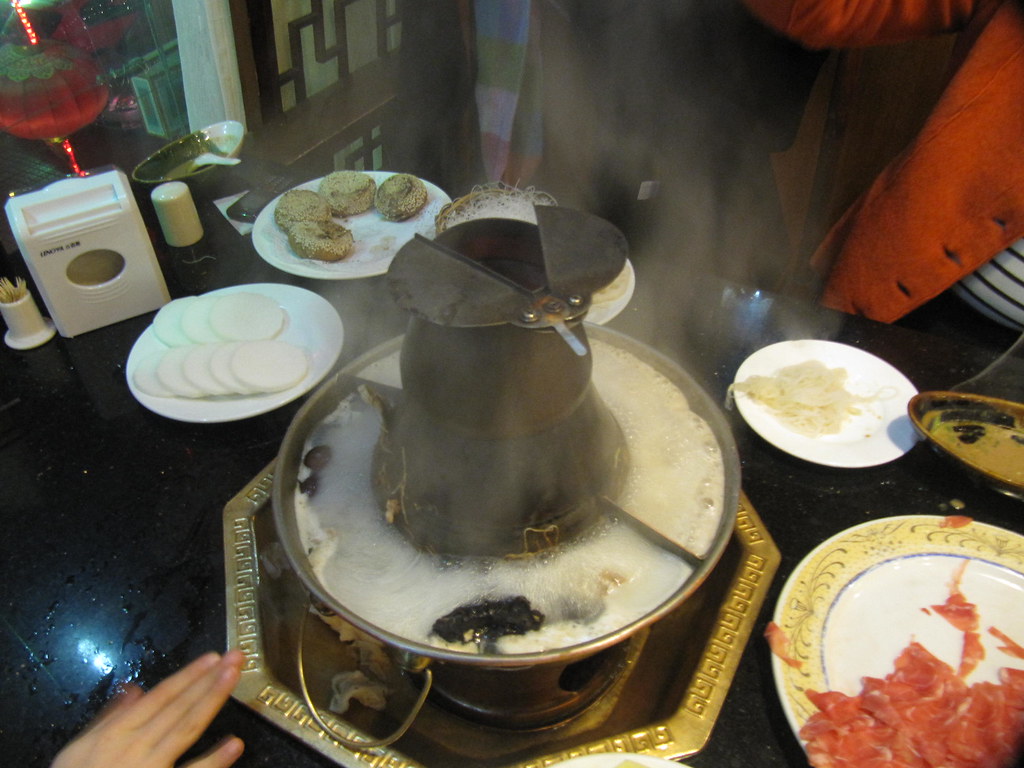 You then cook the food yourself, dipping the skewered ingredients into the broth. You can choose from various meats and veggies, but lamb remains the most common ingredient. After cooking the food, you then dip it into your choice of sweet and spicy sauces.

When walking around Beijing, you can easily find restaurants serving Mongolian hot pot. Just peek inside and look for the distinct pots of broth sitting at the centre of the tables.

Fill up on whatever you want with grilled skewers of assorted ingredients cooked in a spicy broth called mala sauce. 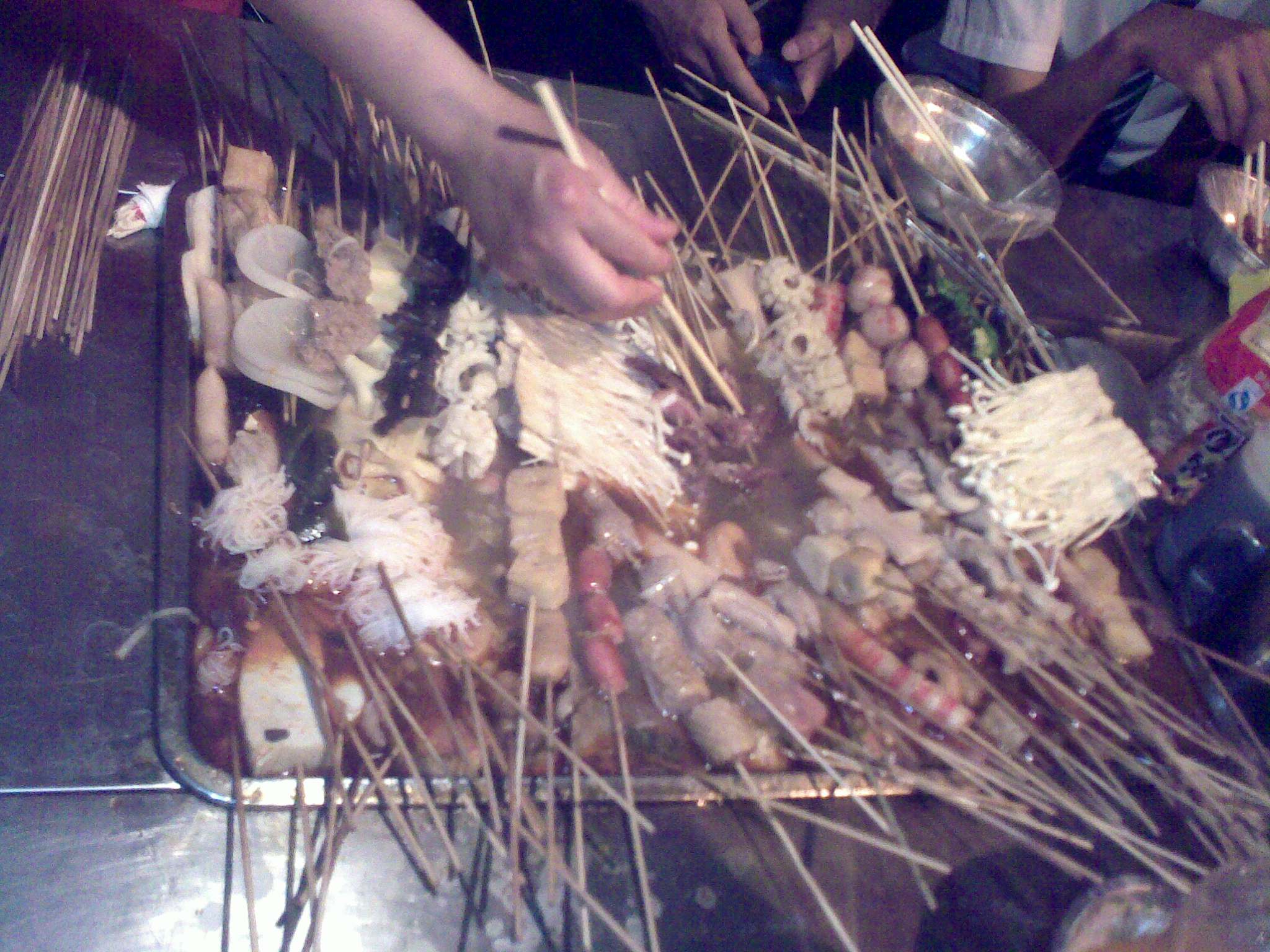 Malatang is another dish that’s become associated with Beijing cuisine, despite originating in Sichuan province. The city has adopted the meal and added its own flair.

It’s traditionally served as a hot pot, with the ingredients added for each table. In Beijing, malatang has become street food, served from a communal pot containing skewers of ingredients.

You grab a skewer, eat the food, and keep the skewer on your plate. When you finish eating, you’re charged based on the number of skewers.

Where to stay: The best hotels for foodies in Beijing

As you’d imagine in a city of such immense size, figuring out where to stay in Beijing can sometimes be a challenge. For foodies, staying anywhere in the city centre will put you in touch some of the best dishes that Beijing has to offer. Here are a few recommended hotels to start your search…