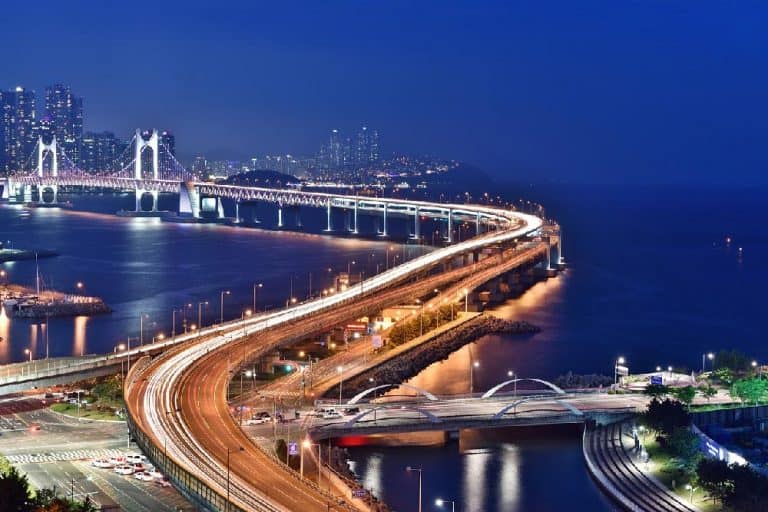 The majestic mountains, steaming hot springs, and a sprawling metro area highlights a few of the reasons to visit Busan, South Korea.

As the second-largest city in South Korea, it’s also developed its own distinct cuisine.

The city is known for its fish cakes, pork soup, and amazing street food. You can find mouth-watering fried chicken served with beer, sugary toast, and crispy seed pancakes.

Is your stomach starting to growl? It should be by the time you finish this complete Busan food guide…

Pork soup is a staple of Busan cuisine and one of the city’s most famous dishes. It’s considered comfort food, often served when you’re feeling sick or weak. 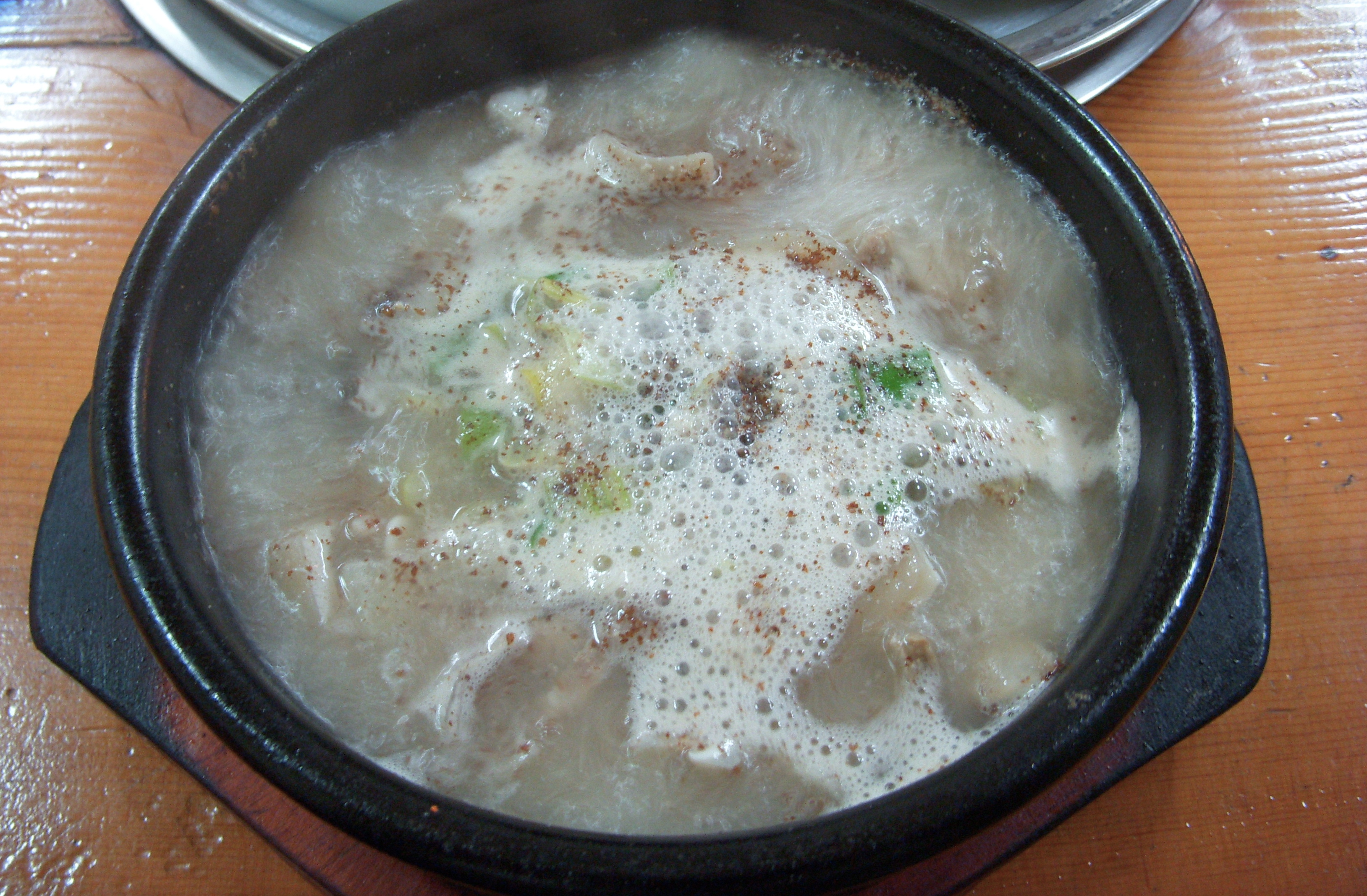 When you order pork soup, you get pork belly meat served in a spicy bone broth with scallions. It’s often seasoned with salted shrimp.

Pork soup isn’t a simple meal. Chefs spend hours boiling the pork to create the creamy broth. After the bones are removed, rice wine, sesame oil, and soy sauce are added. It’s then poured over a bed of steamed rice and served with various side dishes.

In a city with hundreds of Dwaeji Gukbap restaurants, Masan Sikdang is considered a top choice.

Chimaek is fried chicken, an incredibly popular meal throughout South Korea. In Busan, you’ll often find it served with an ice-cold beer. The name comes from the Korean words “chickin” for chicken and “maekju” for beer. 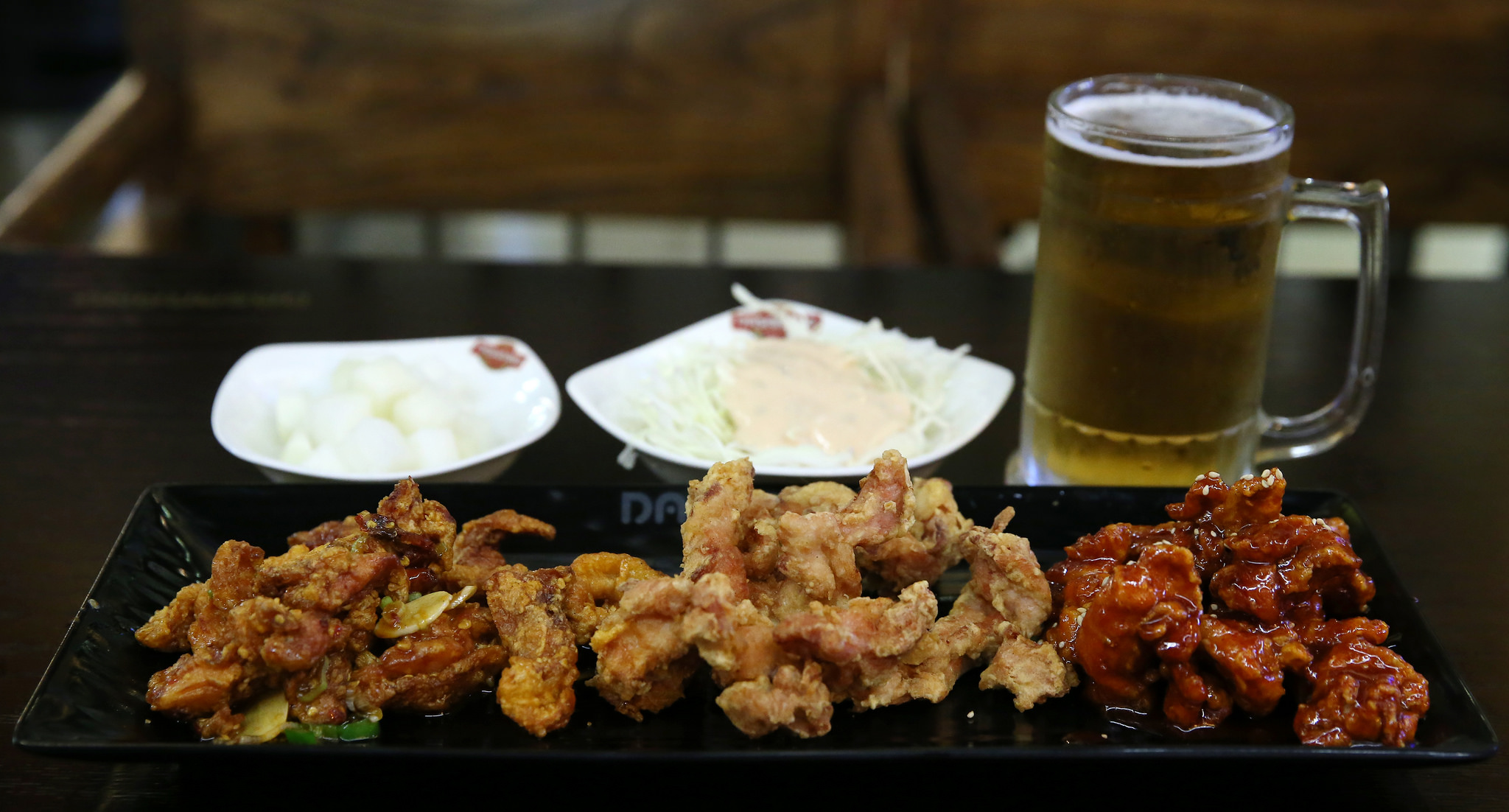 After the Korean War, fried chicken became a favourite among locals. It spread from the U.S. military bases to streets throughout the country. Before the introduction of fried chicken, locals typically only used the poultry for chicken stew.

Some of the best chimaek restaurants follow a simple recipe—double-fry the chicken and season it with salt and pepper. You’ll also find plenty of variations on this classic dish with restaurants throughout Busan experimenting with different seasonings and sauces.

Ssiat hotteok is another dish that you’ll find throughout the city, especially near the markets. Even if you’ve only got 24 hours to spare on your Busan itinerary, tasting this local street food, made from rice flour dough covered in cinnamon and sugar, is a must.

Seed pancakes originated in Busan and are now popular in other parts of the country, mostly due to their appearance on a popular Korean TV show.

To find the best seed pancakes, travel to BIFF street and you’ll find a variety of vendors selling the street food.

Eomuk is also a local specialty. Street vendors prepare fish cakes from various white fish, pureeing the meat and pressing it into cakes. 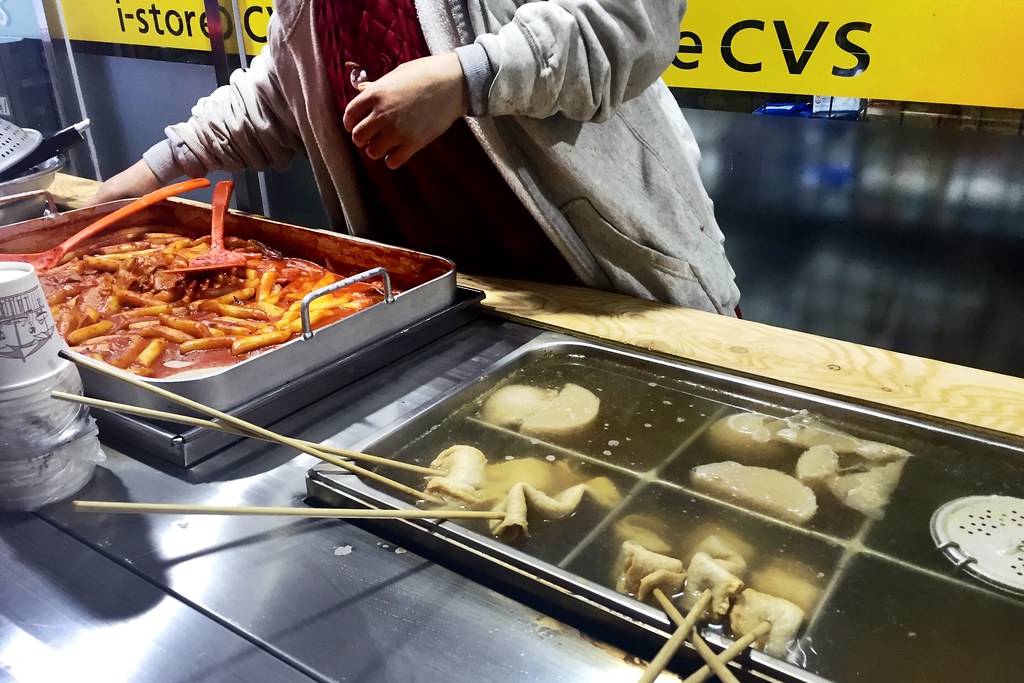 To create the fish paste, chefs use a combination of egg, flour, water, and salt. It’s combined with the pureed fish and made into cakes. The cakes are then carefully added to a wooden skewer and kept warm in a hot broth.

The meal was originally a way to use up leftover seafood. Older recipes often called for leftover fish but modern restaurants tend to stick to certain ingredients such as smoked salmon.

It’s originally a Japanese dish introduced during the Japanese occupation of the country. In Busan, chefs added their own distinct twist. Instead of round cakes, they press the ingredients into long, sausage-shaped pieces.

Cold wheat noodles are chewy and often served in a cold broth with slices of cucumber, beef, and pear. Chefs also tend to add a scoop of gochujang sauce. The noodles are made from a mix of flour powder and starches from sweet potato. 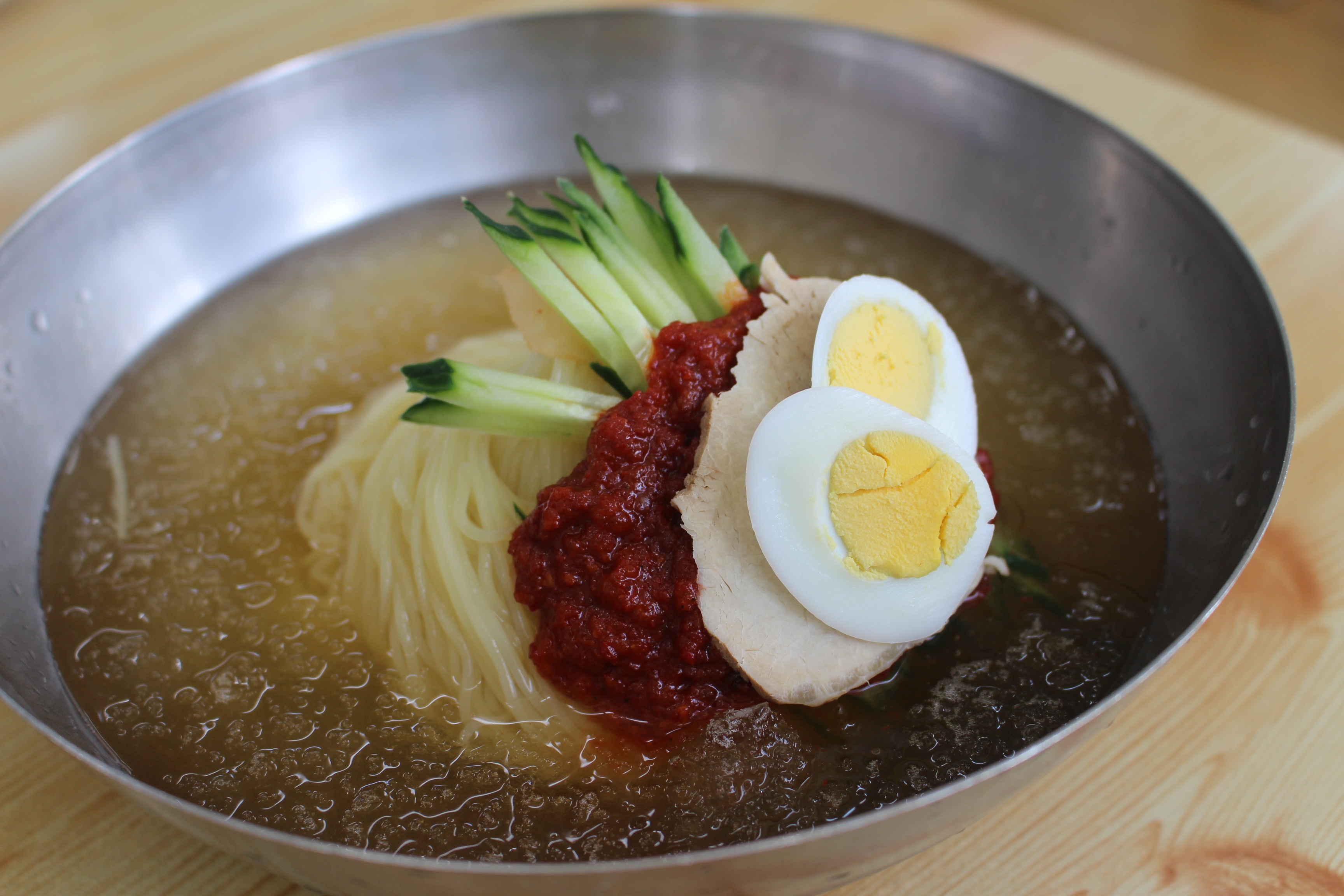 This is another dish that originated in Busan but people aren’t quite sure about the details.

Some believe that refugees in Busan during the Korean war started preparing noodles using wheat flour instead of buckwheat. Another possible origin story involves the opening of a restaurant in Busan by two restaurateurs from North Korea.

Moolhwe is a type of spicy raw fish soup. As with Japanese sashimi, it includes thin slices of raw fish. It’s often served in a spicy broth made from chili paste mixed with either vinegar or soybean paste.

Other variations include thin slices of raw fish wrapped in vegetables such as perilla leaves. You may also find it served with a variety of veggies including carrots, onions, green pepper, or cucumbers. After the dish is prepared, it’s cooled using ice cubes or crushed ice.

The cold dish is a common choice during the warm, humid summer months. When you’re drenched in sweat, the icy meal energizes and revitalizes.

Here’s another pancake to try. Instead of being filled with seeds, these pancakes are made with a combination of rice flour, seafood, and scallions. Scallions are the main ingredient, giving the pancakes a bright green colour. 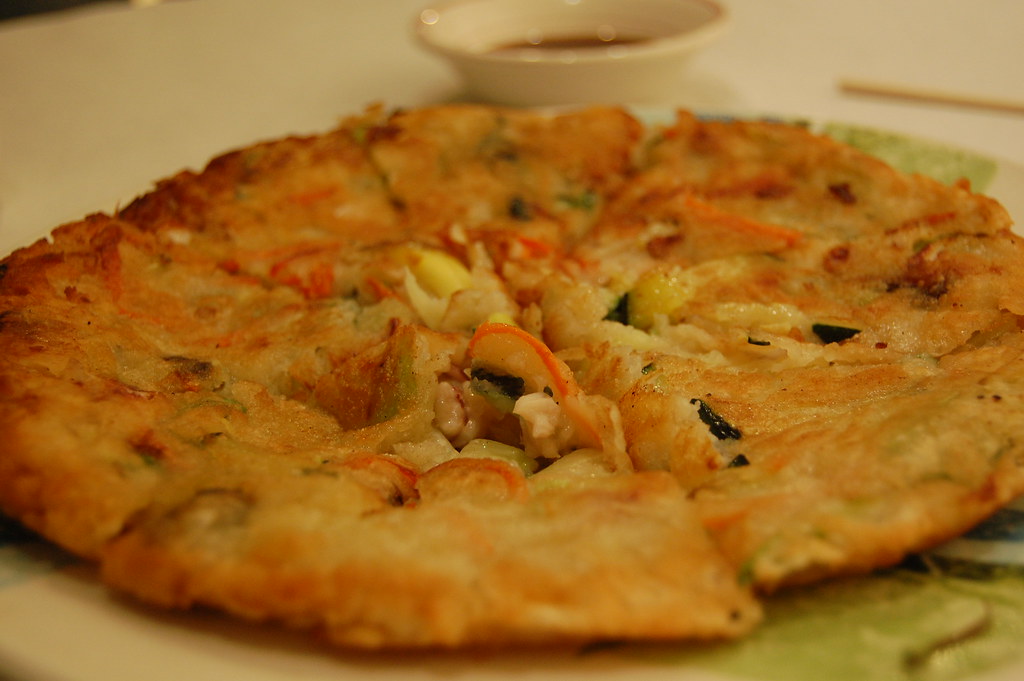 To prepare the pancakes, chefs fry the scallions in a hot pan and then add them to the batter. It’s then fried until the bottom is crispy and golden brown.

Depending on where you get the pancakes, you may also get a tasty soy sauce with onions and vinegar for dipping.

The seafood ingredients vary. Restaurants may use clams, shrimp, or oysters. Squid has also become a top choice in recent years.

Korean Street Toast is one of the most popular examples of Busan street food. It’s basically a toasted sandwich made with two slices of white bread. 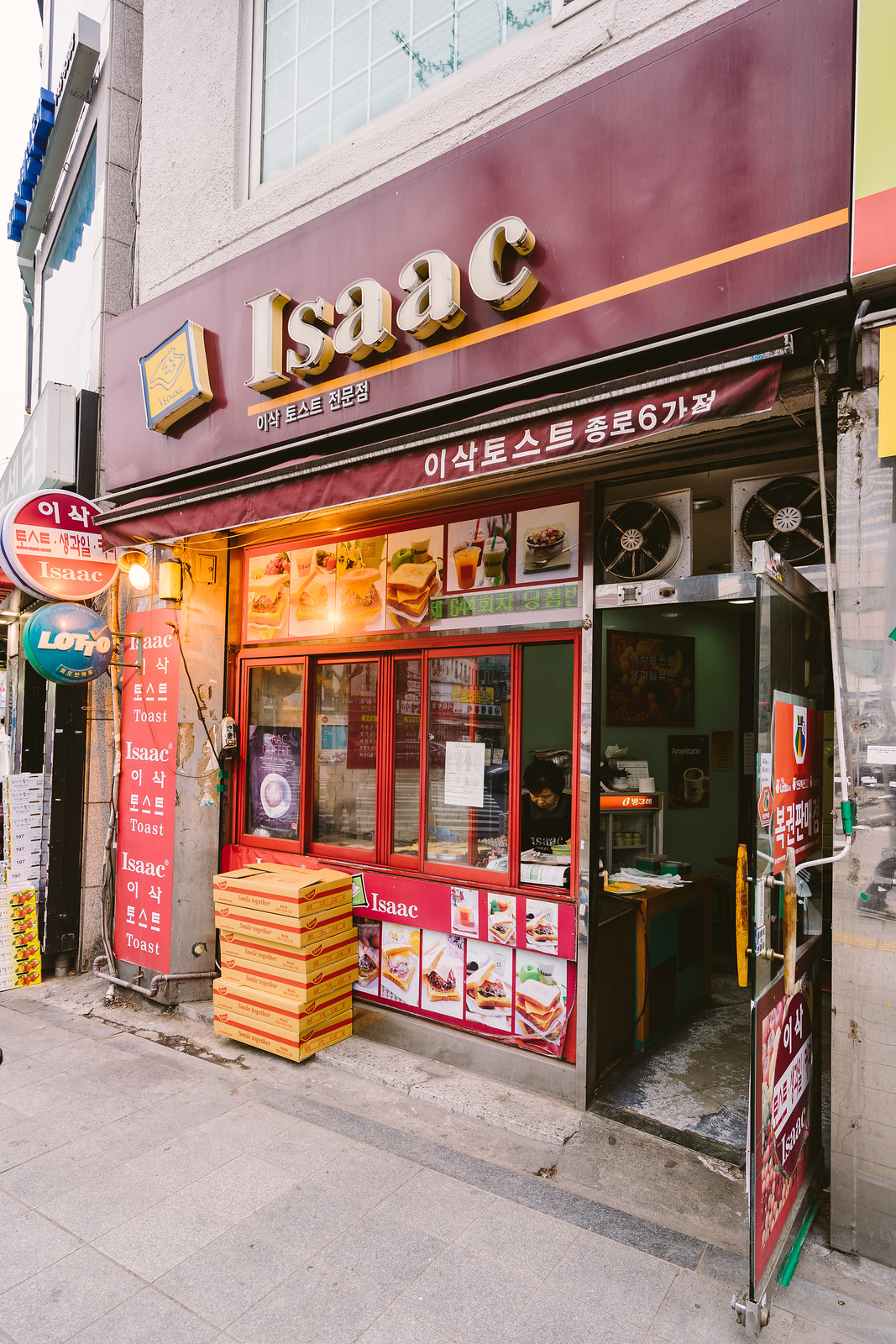 Some people also call it Korean egg toast or simply Korean toast. It’s become a favourite choice for breakfast on the go, originating about two decades ago in Korea.

You’ll often find it served with cabbage, tomato sauce, and an omelette sandwiched between the two pieces of toast. It’s then sprinkled with sugar, giving the unique sandwich a sweet taste.

As you wander around Busan, look for Isaac Toast. The local eatery has vendors throughout the city serving the street toast.

Where to stay in Busan: The best hotels for foodies

Like the Korean capital city of Seoul, choosing where to stay in Busan can sometimes be difficult. If you’re looking for the best food in Busan the city centre, especially the areas of Nampo-dong, Jung-gu, and Dong-gu, are a good place to start your accommodations search. Here are a few of our top hotel picks…