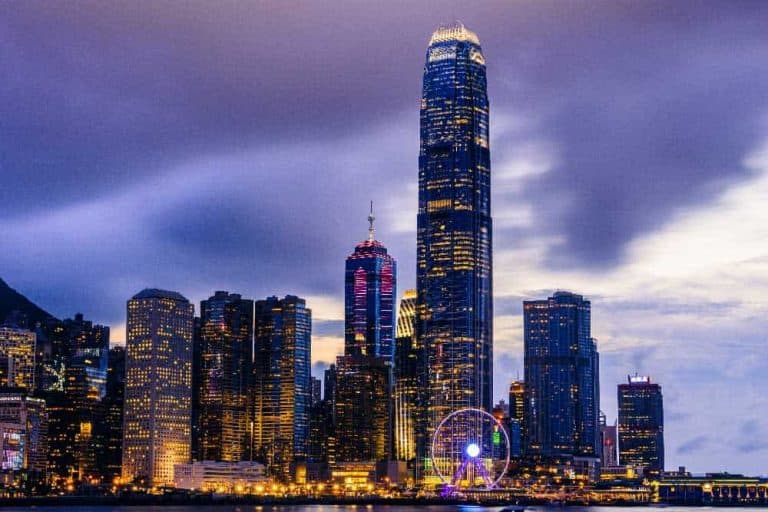 Hong Kong cuisine is unique. It’s heavily influenced by Cantonese, British, Japanese, and Korean cuisines. With so many influences, it’s no wonder it’s one of the culinary capitals of the world. If you’ve never been to the city, you may wonder what to eat in Hong Kong.

In visiting Hong Kong, there’s plenty of choice when it comes to searching out best foods. You can find traditional Chinese food, Western-style fast food, and everything between.

Rice is a staple ingredient, served with just about everything. Most meals contain steamed, cooked, or fried rice (or noodles). You’ll also find lots of dishes with cabbage, mushrooms, shrimp, scallops, and eggs.

Pork, goose, ducks, fish, chicken, beef, and just about any meat you can think of is on the menu. From spicy to sweet, from celebrity chef to street vendors, and everything in between, Hong Kong has it all.

Feeling a little hungry? Grab a snack as you check out this complete Hong Kong food guide…

You can’t say that you’ve tried Hong Kong cuisine without trying dim sum. Dim sum isn’t a specific dish. It’s the name for a variety of small dishes typically served with tea. In fact, trying an afternoon dim sum meal might just be one of the best things to do in Hong Kong! 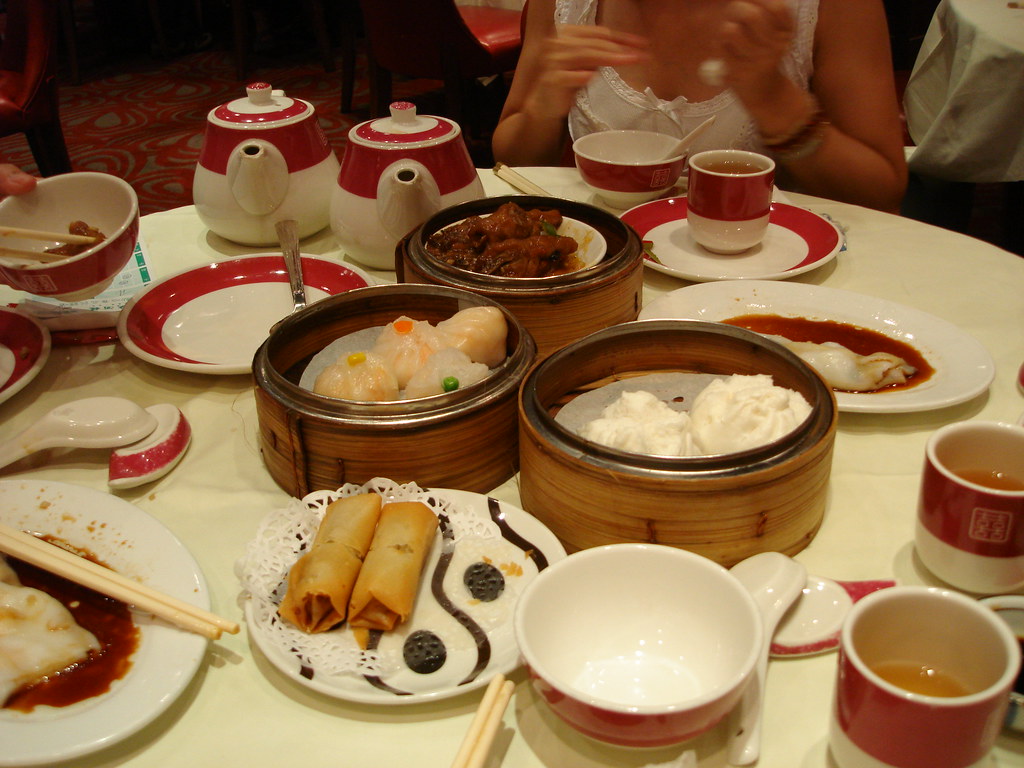 Dim sum is often part of an early morning meal, so most varieties are steamed instead of fried, but you’ll also find various snack-sized variations of the dish.

The traditional dish also covers all aspects of Hong Kong cuisine. Within the city, you can discover over 2,000 versions of dim sum.

Some of the most classic dim sum dishes include steamed shrimp dumplings, Siu Mai, and barbecued pork bun.

The ingredients vary, but dim sum typically contains meat or vegetables with dumplings.

Char Sui is a popular way to prepare Cantonese-style BBQ pork. While you’ll find BBQ pork in most major Chinese cities, the real masters of the dish work at restaurants in Hong Kong. 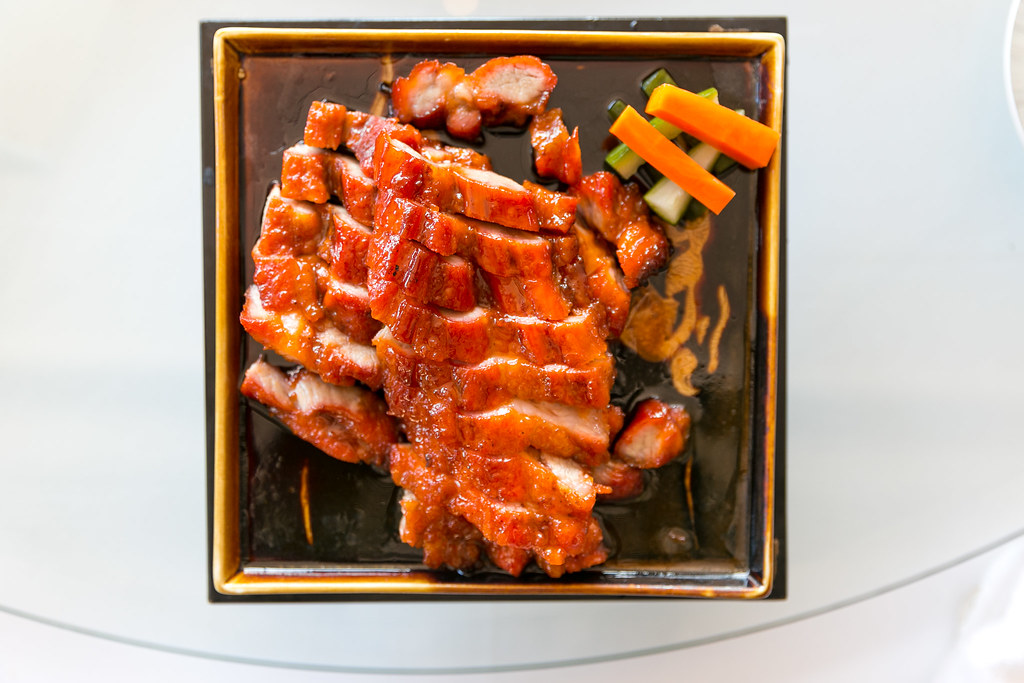 Hong Kong has restaurants that specialize in char sui, meaning that they specialize in roasted meat dishes. You can often find these establishments by simply looking at the windows. The restaurants typically hang pictures or signs of the types of meats that they roast.

Some restaurants even offer up a “fast food” version, with the meal served in a rice box as a lunch menu item. Depending on where you go, you may find barbecued pork served with steamed veggies and rice or noodle soup.

Hong Kong residents love roasted meats. Duck, chicken, and pork are common choices, but the roast goose is something you can’t miss. 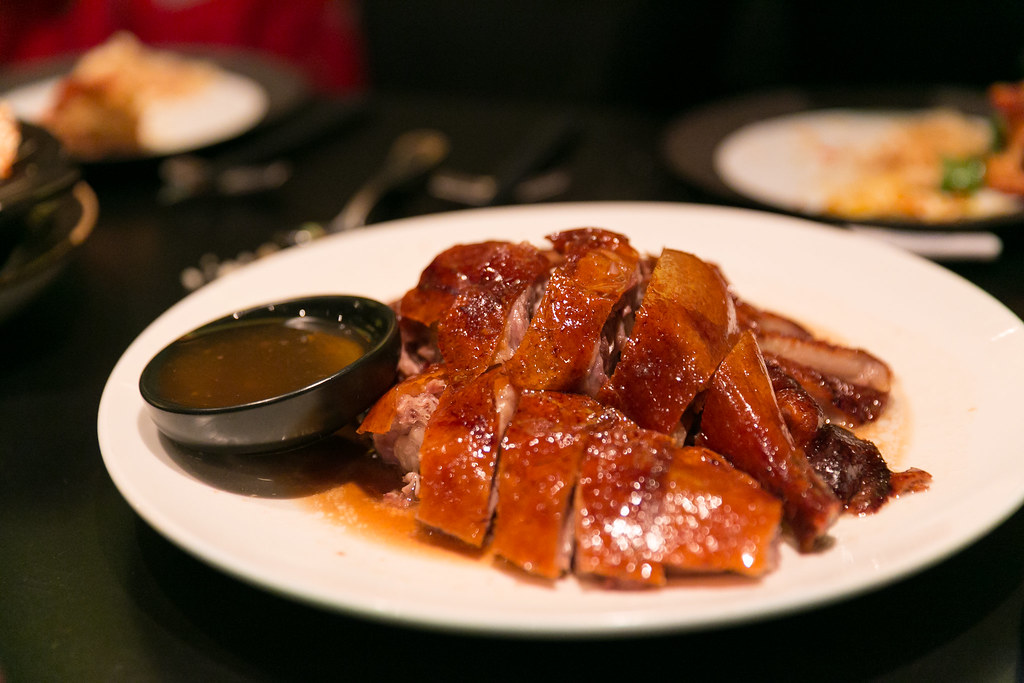 Most chefs develop their own secret blend of spices to flavour the goose before roasting. The result is often mouth-watering and crispy.

When prepared correctly, the extra crispy exterior hides a layer of fat and tender meat. The spices help remove the “gamey” flavour that many associate with goose.

If you want authentic Hong Kong-style roast goose, visit Yat Lok. The restaurant first opened in 1957 and with recipes passed down to each generation continues to be one of the best places to eat in Hong Kong. Order the restaurant’s specialty, a goose drumstick served with noodles in a light broth.

Your culinary tour of the city wouldn’t be complete without Hong Kong street food. Egg waffles were one of the most popular options at one point, with almost every food stall selling their version of this simple food.

It’s not as common as it was decades ago, but you can still find a tasty egg waffle if you wander the streets long enough.

It’s made with eggy leavened batter cooked between two plates covered in semi-spherical cells. The waffle consists of a group of egg-shaped ovals.

It’s often served hot and plain, but you can also find it served with a variety of other ingredients. Some food stands sell egg waffles with ice cream, fruit, or chocolate.

A common winter-time dish, beef brisket noodles are at the top of the list of original Hong Kong-style dishes. The beef brisket is the main ingredient and it’s often flavoured with a combination of fish sauce, brown sugar, and various spices. 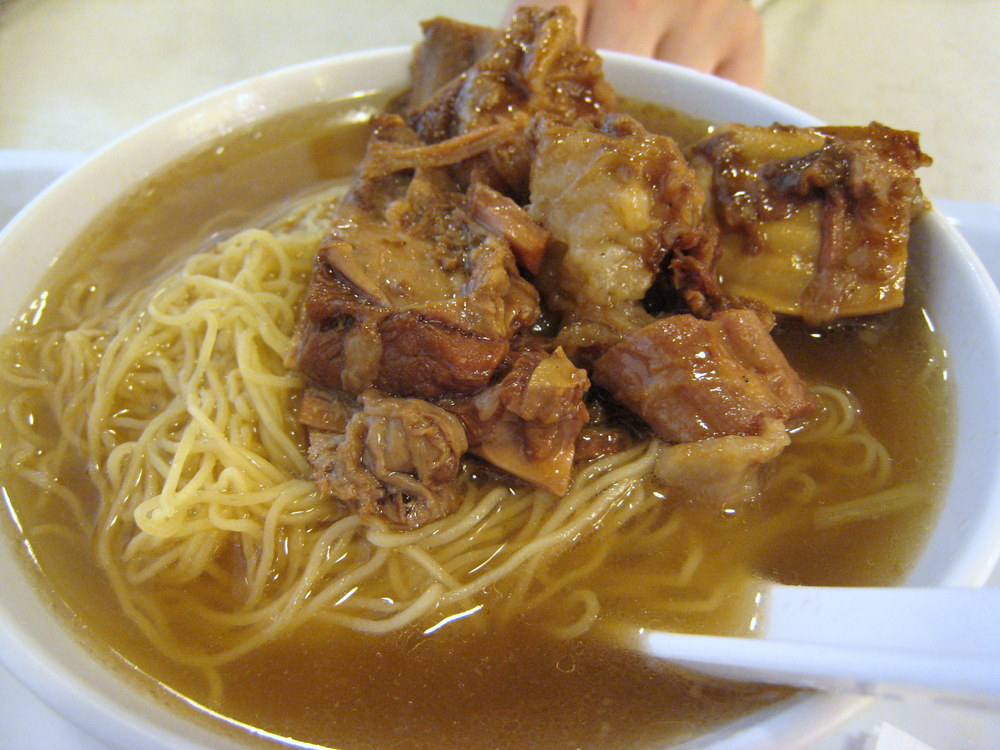 Chefs may also add carrots, radish, onion, and ginger. The ingredients are slow-cooked to perfection, resulting in soft, tender brisket.

The only problem with the dish is the cost. Restaurants often charge a premium for this slow-cooked dish, most likely due to the amount of time needed to prepare it.

If you want the most-recommended beef brisket noodles in Hong Kong, head over to Kau Kee Restaurant. The portion sizes are a bit small and come with clear soup and curry noodles. 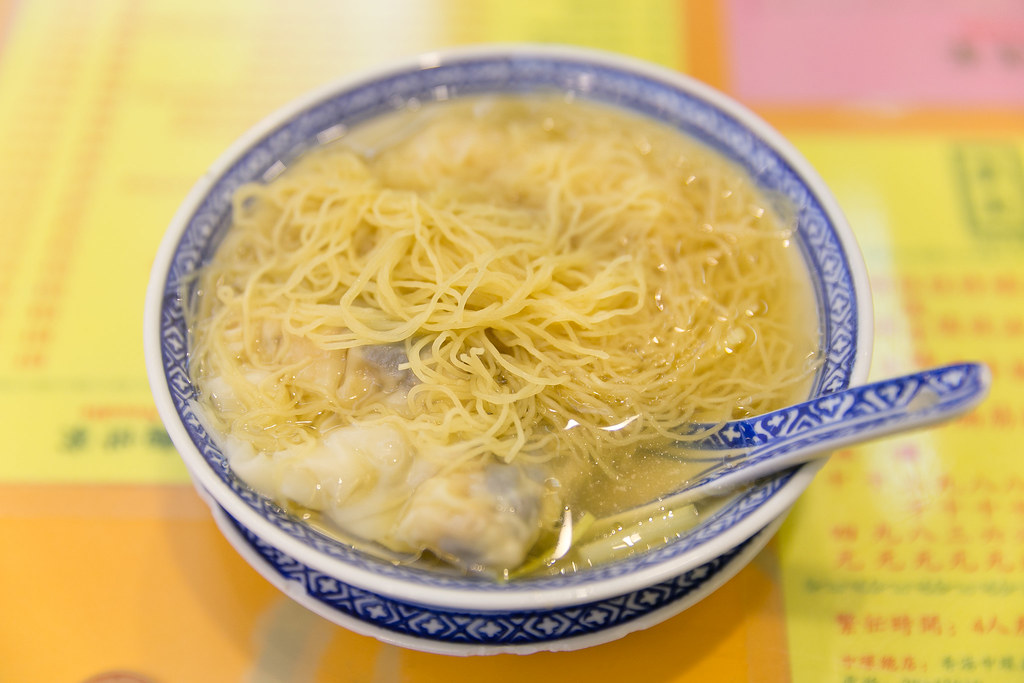 Wonton is a type of filled dumpling. It’s served with thin noodles and comes with different fillings. You can find wontons containing chicken, pork, prawns, and other meat. Chefs may also add various vegetables such as mushrooms or onions to balance the flavour.

Shrimp wontons made with prawn are the most common. They may also contain small amounts of minced pork and fresh, smooth noodles served al dente.

Preparing quality wonton noodles requires detailed steps. It’s served with the wontons above the spoon and the noodles on the very top, helping to keep the noodles from cooking too much.

While pork and other red meat options are popular choices in Hong Kong, the locals also enjoy seafood and prefer their fish steamed. 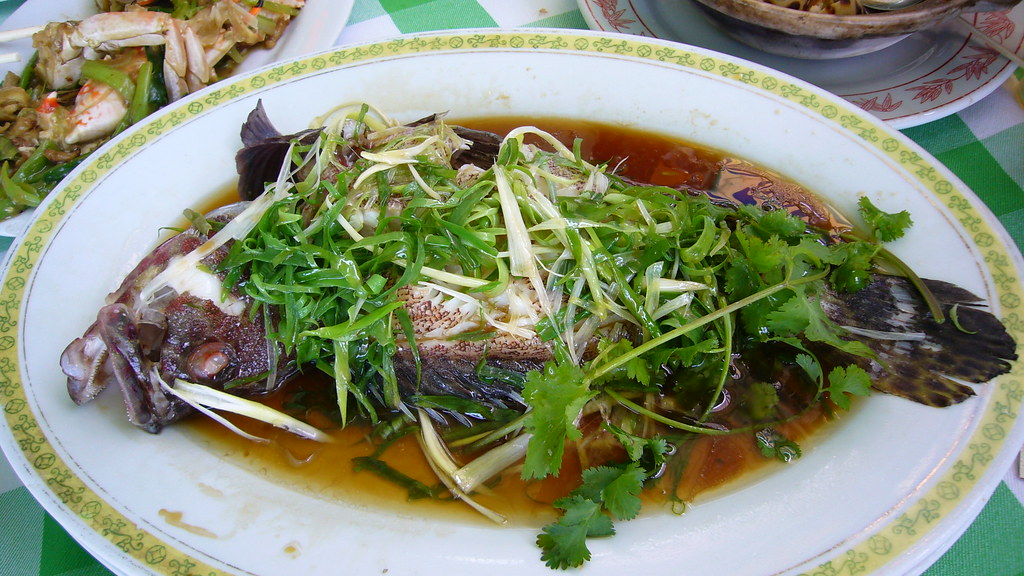 Steamed fish is often served as a final course at traditional Chinese restaurants. It’s a simple meal, but the steaming process requires skill to get the flavour just right.

Chefs often steam the fish over slices of ginger in a wok containing boiling water. While the fish steams, the chef prepares a sauce using a combination of cooking rice wine, sugar, water, and soy sauce.

After steaming the fish, the chef pours the sauce. It’s often served with a selection of steamed vegetables, cut into thin slices, and arranged on top of the fish.

As mentioned, rice is a staple of Cantonese cuisine. You can’t order more than a few meals without getting rice. Congee is just one of many ways to prepare rice. It’s a type of rice porridge made from white rice boiled multiple times. 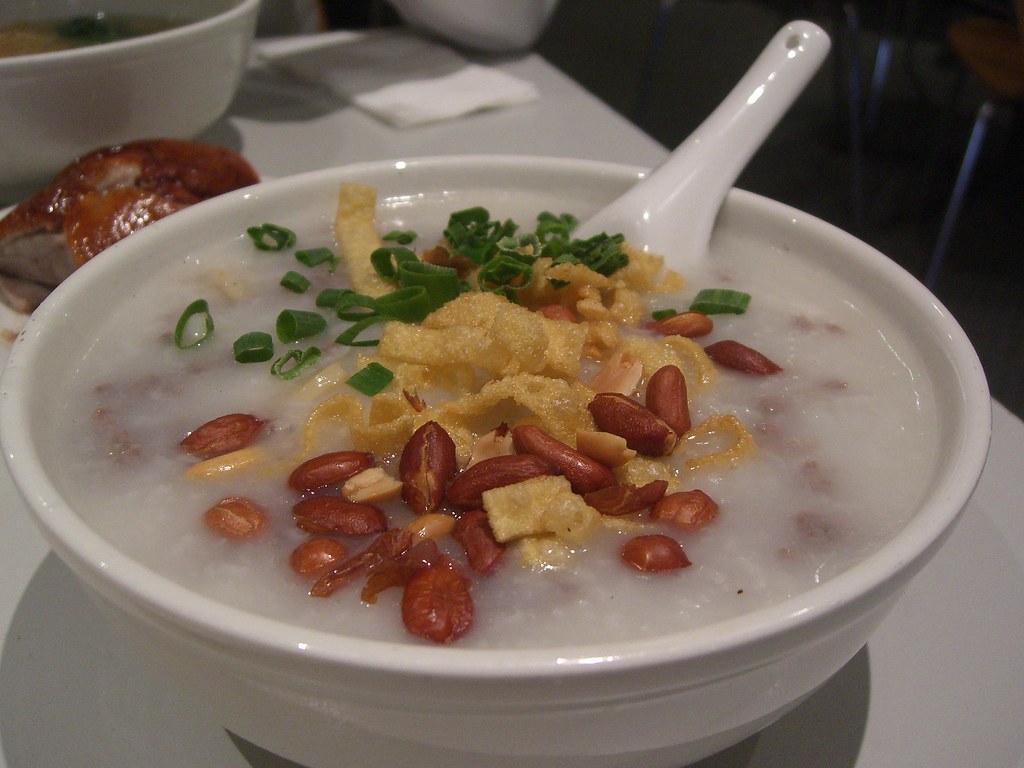 The boiling process helps break down the rice, resulting in a thick, white porridge.

Congee is also a comfort food. People may give a friend or family member a bowl of warm congee when they’re feeling sick.

Where to stay in Hong Kong: The best hotels for foodies