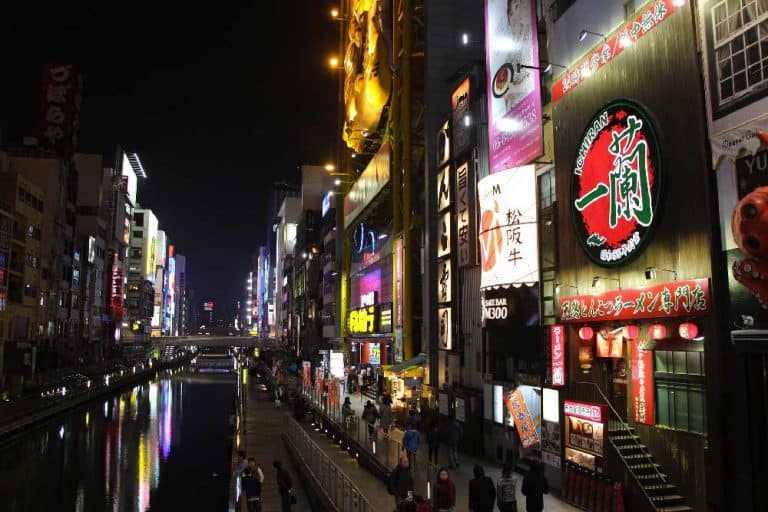 For culinary delights, few world cities compete with Osaka, Japan’s third-biggest city. For many travellers, figuring out what to eat in Osaka is front of mind on the travel agenda.

There’s no shortage of food options in Osaka. No matter where you wander in Osaka, you’ll stumble upon great restaurants and one-of-a-kind street food vendors. They serve everything from authentic Osaka cuisine to Western dishes with a Japanese influence.

Wherever you are in Osaka, you’ll find vendors selling sweet buns called taiko-manju. This traditional treat is a staple of the Osaka region. Taiko-manju is made with a batter comprised of flour, sugar, and eggs. The batter is beat into the shape of a drum and filled with steamy bean paste. 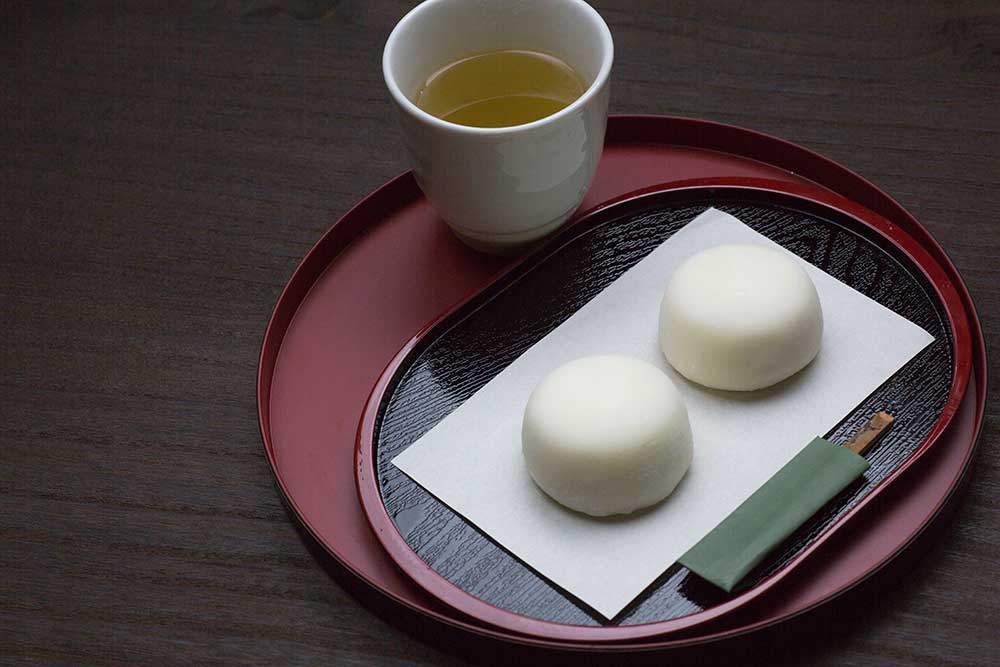 Taiko-manju is a surprisingly filling dish. The bean paste gives you protein while the batter provides carbs. When you’re busy running between the top Osaka attractions, these affordable meals are convenient. You can carry them and eat as you head to your next destination. (Just don’t eat on public transit; it’s considered rude.)

If you want the best taiko-manju in the city, head to Gozasouro. It’s located on the first floor of the JR Shin-Osaka Station.

Octopus is on the menu when you decide to try takoyaki, one of the top choices for what to eat in Osaka. Takoyaki is yet another Osaka street snack including a protein source, covered in batter and fried.

With takoyaki, the batter is wheat flour-based. The inside is typically filled with diced or minced octopus, ginger, and green onion. They’re generally topped with a Japanese style mayo and fish flakes. 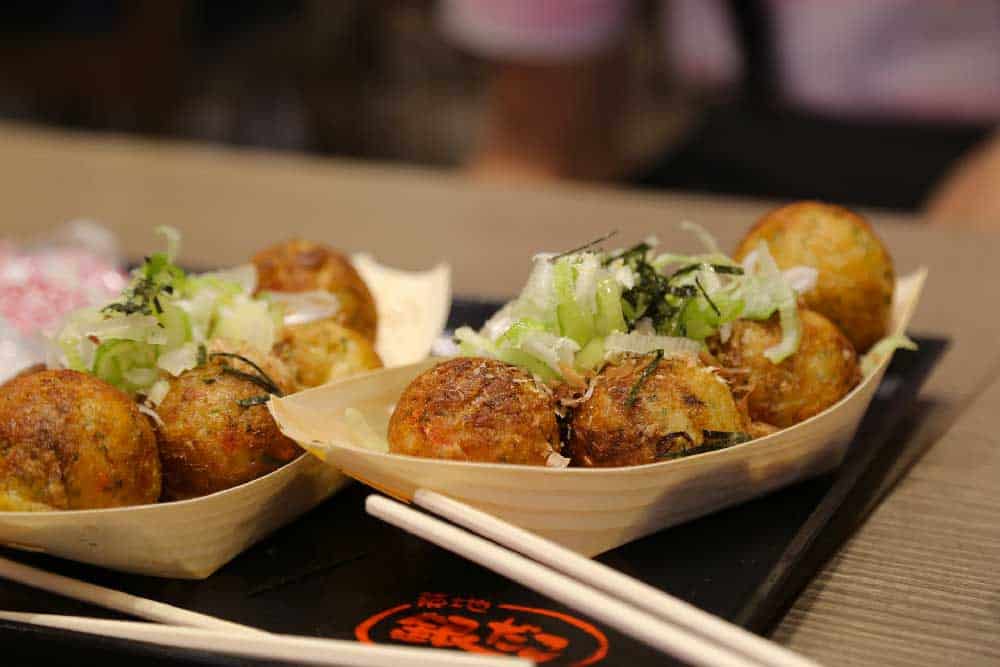 As you walk through the busy commercial districts of Osaka, look for restaurants pulling fresh takoyaki from the oven. These takoyaki are often baked in special mold pans and taste best when they’re still steaming hot. (Just be careful not to burn yourself!)

There are several restaurants that specialize in takoyaki. One the most recommended spots for takoyaki is Takoyaki-Douraku Wanaka in Umeda. The restaurant is open seven days a week and stays open late.

If octopus doesn’t sound appealing, should try negiyaki instead. Negiyaki is one of the most popular local foods in Osaka.

This special meal tastes like crepes and is filled with lots of green onion. Negiyaki is often served with soy sauce. Some versions also include meat such as beef or pork.

The thin pancake-like batter is a light and crispy. Negiyaki a great option for lunch or a quick bite. 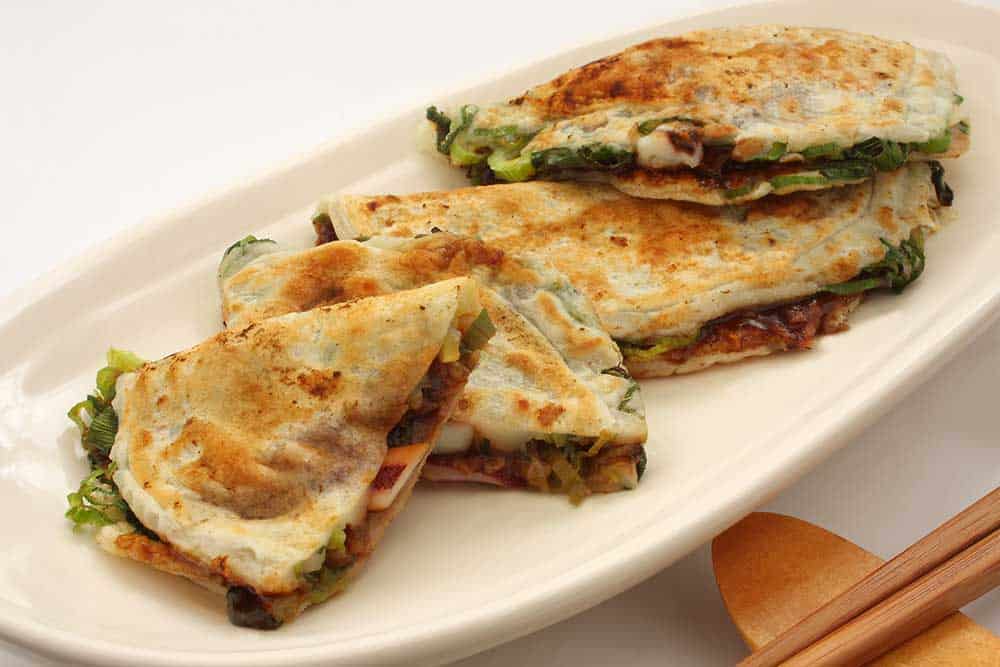 Negiyaki is a favourite food for people of all ages in Osaka. You’ll find it at many different shops throughout the city. If you want to try authentic negiyaki though, visit Negiyaki Yamamoto. There are several several locations around the city. They’re open seven days a week, but most don’t open until 11:30am.

If the negiyaki doesn’t fill you up, okonomiyaki is the next on the list of must-try food in Osaka. Okonomiyaki is a lot like negiyaki, but these savoury pancakes are thicker. They’re also filled with more ingredients.

Instead of green onions, in okonomiyaki you’ll get cabbage, pork, or seafood. Okonomiyaki a staple of the Osaka region and is made with batter and fried on a griddle like a pancake. 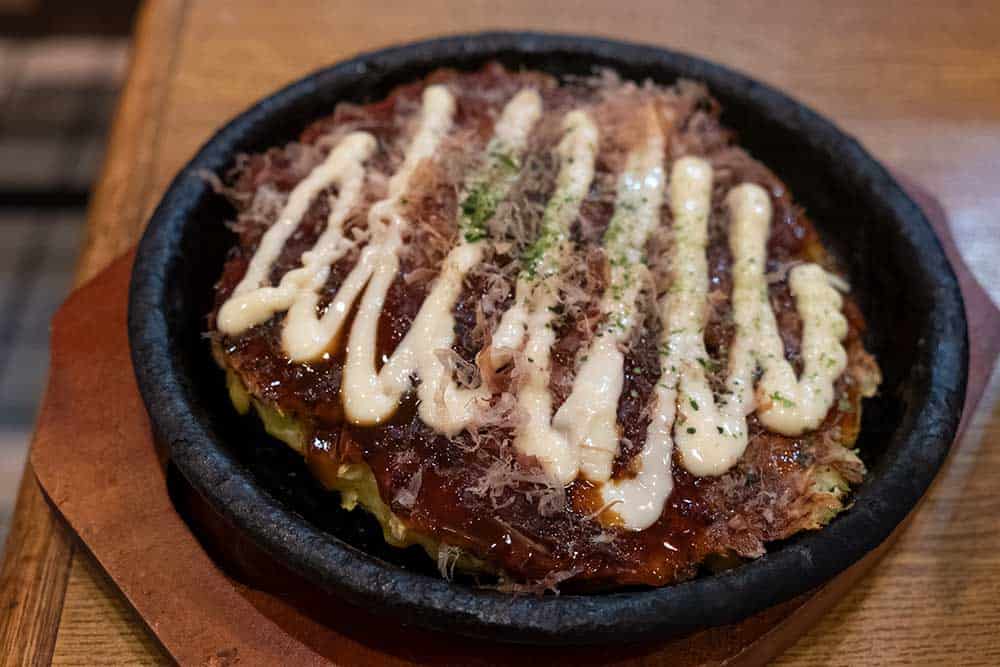 There are quite a few great spots to find tasty okonomiyaki in Osaka. One of the top okonomiyaki restaurants in Osaka is Chibo. It has quite a few locations throughout the city.

You may have started to notice that most of the top foods in Osaka are made with batter. These foods are called Konamono. Most Osakaites have their own favourite recipes that they often prepare at home.

While you can fill the inside of the food with almost anything, cabbage and meat are usually the main ingredients. 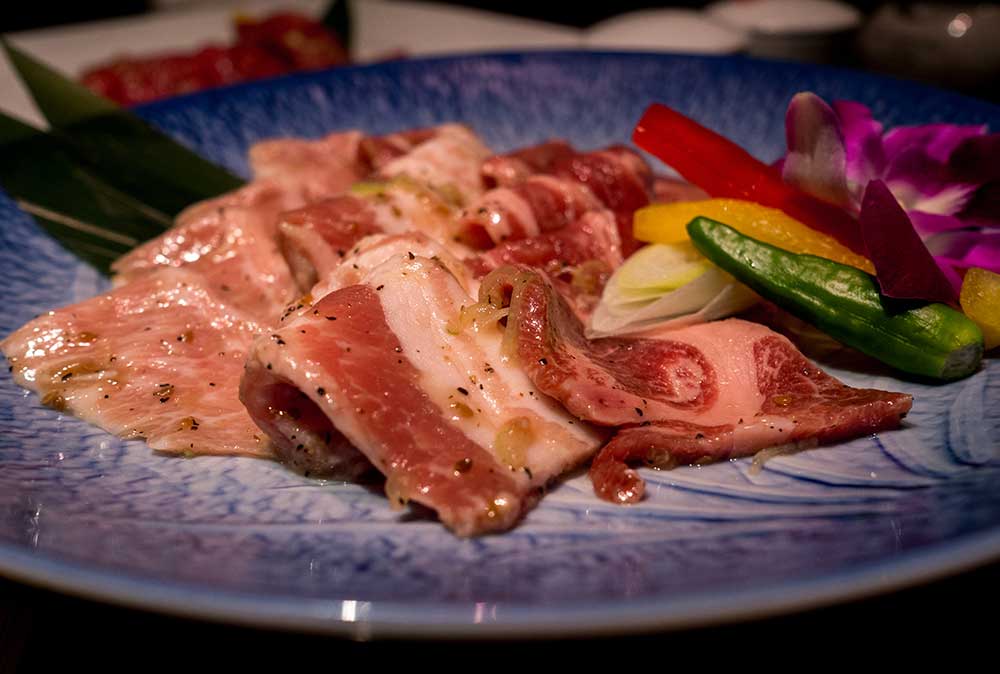 While it’s inspired by Western barbecue, yakiniku is most popular among Korean people who live in Osaka. In fact, you’ll find many Korean restaurants that serve this dish, especially in the largest Koreatown in the area.

The most recommended destination for mouth-watering yakiniku is Tsuruichi in Tsuruhashi. If you plan to go on a weekday, note that the restaurant is closed between 3pm and 4pm each afternoon.

If you want more deep-fried food in Osaka, you’ll enjoy kushikatsu. Kushikatsu generally refers to deep-fried meat on a stick. You can also find deep-fried vegetables on a stick or a combination of both (the Japanese version of a shish kebab). It’s one of the most popular foods in Osaka. In fact, you’ll find cans of special sauce made just for kushikatsu in most shops. 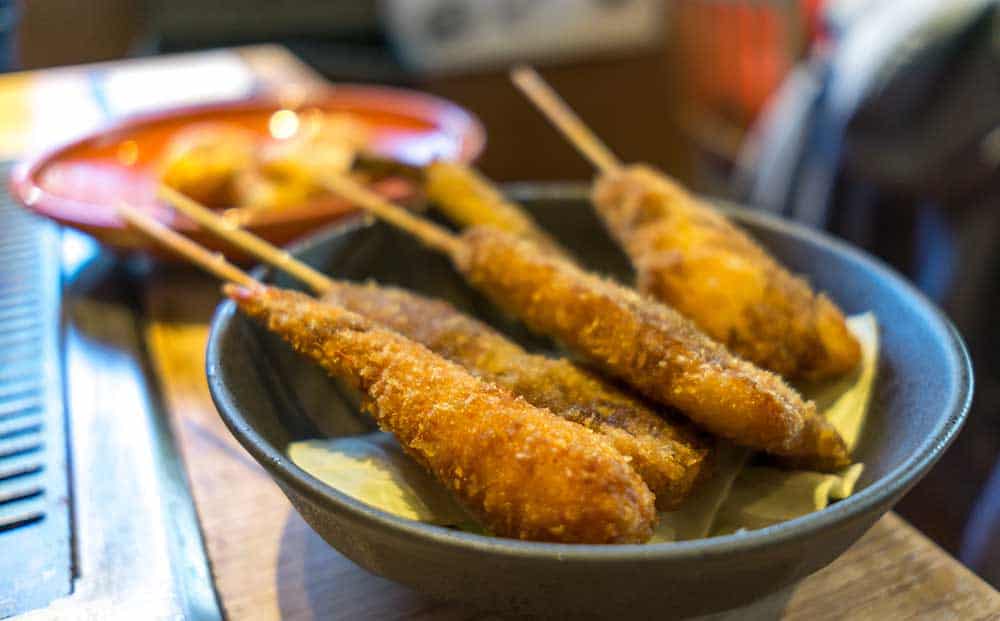 Osakites have a general rule for eating kushikatsu. You should never double-dip your stick in the sauce. Double-dipping is considered rude, even if you’re a tourist.

For the best kushikatsu, visit Daruma-Tsutenkaku in Shinsekai. The restaurant serves incredibly tasty kushikatsu. Expect to pay a premium for it.

One of the most popular choices for what to eat in Osaka, kitsune udon is a noodle-based dish made with thick wheat-flour noodles (udon). Kitsune udon is served with a piece of tofu that’s deep-fried and simmered in a sweet sauce. While you can find this dish in almost any city in Japan, it originated in Osaka. 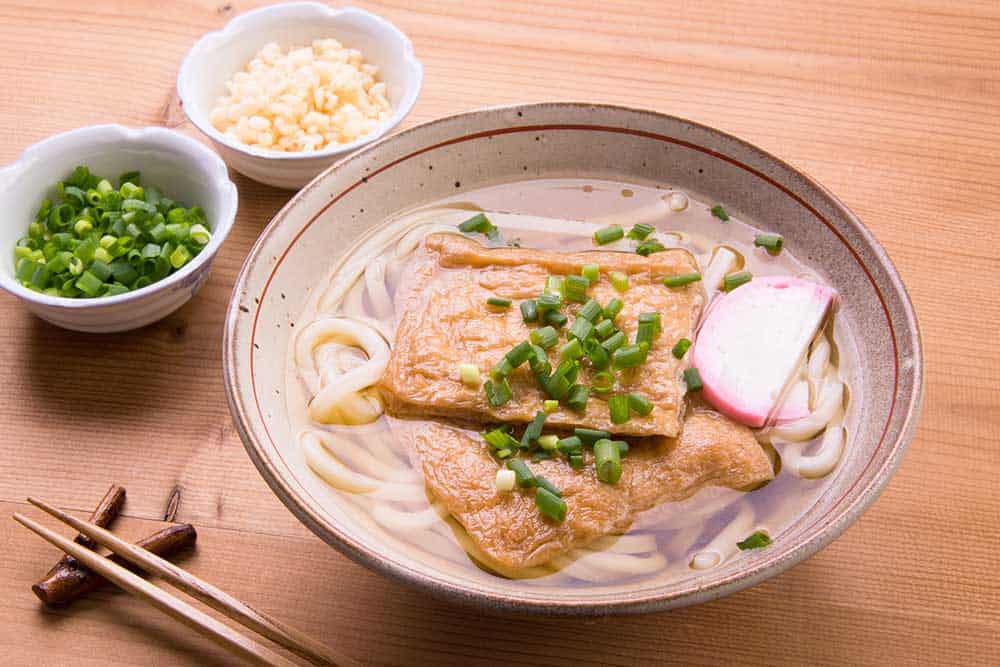 The sweet, crispy deep-fried tofu is the star of kitsune udon. When you get it in Osaka, you might notice it’s typically lighter compared to the version of the dish served in Tokyo or other major cities.

You can find the kitsune udon in various restaurants throughout Osaka. For the original, hit up Usami-tei Matsubaya. It was considered the first restaurant in Osaka to serve up this dish.

Another famous food in Osaka, doteyaki is skewered beef sinew. It’s covered in sweet sake, miso paste, and sugar. Doteyaki has a distinct flavor. It pairs well with beer, making it a popular choice in neighbourhoods loaded with bars. When you visit the entertainment districts, you’ll often find vendors selling these treats to nighttime revelers. 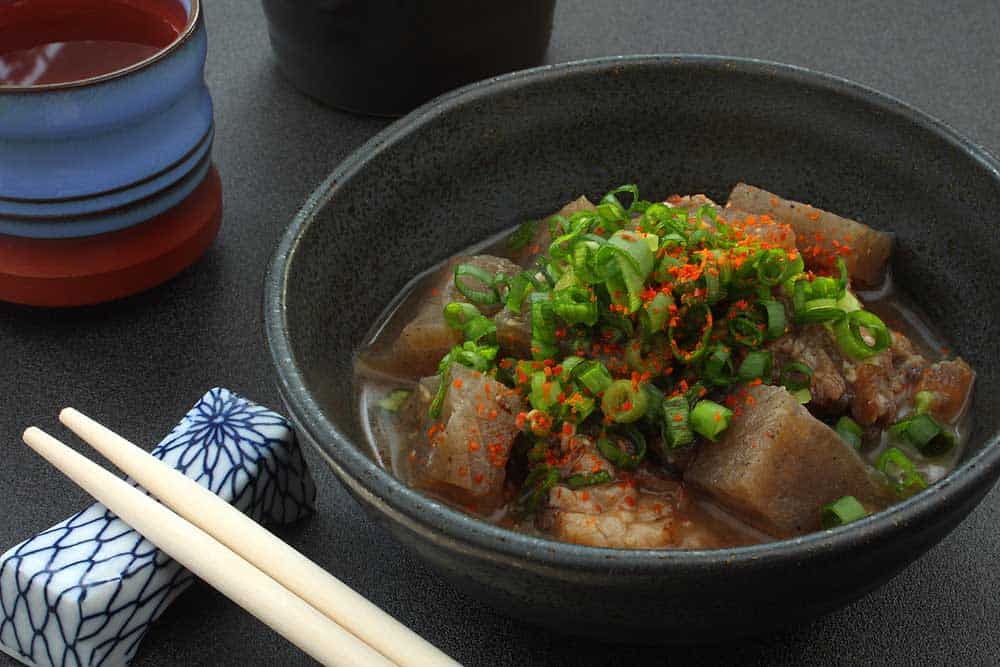 Doteyaki is one of the most unique foods that you can find in Osaka. Not everyone will enjoy the sinewy beef of doteyaki. It’s chewy, stretchy, and often contains some fat. It’s a delicacy and deserves to be tried at least once. If you’re adventurous, go for it!

Kushikatsu Doteyaki Nadai Tsurukameya is a popular destination for quality doteyaki. The restaurant is open 24 hours a day. It tends to be busiest around nine in the evening.

Where to stay in Osaka for foodies

For eating to your heart’s content in Osaka, there are plenty of great places to lay your head. Among the best areas to stay in Osaka for foodies are Dotonbori, Namba, and Shinsekai. Each neighbourhood is known for their vast selection of restaurants and amazing street food. Here are a few hotels to start your search: