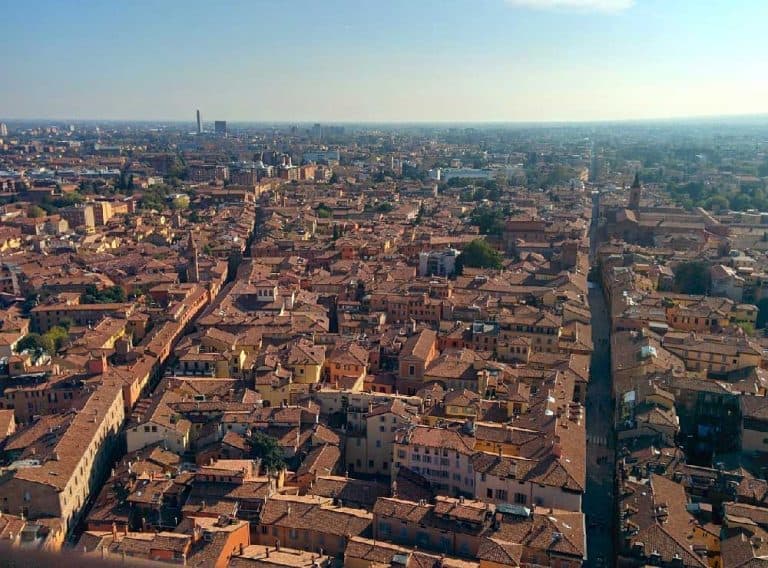 Deciding where to stay in Bologna depends on many factors, including the sites you want to visit and your available budget. The city includes many districts, but most first-time visitors simply choose the historic centre of Bologna.

It’s an underrated city. People tend to skip it in favour of Rome, Milan, and other popular travel destinations in Italy. Of course, this means fewer tourists and a chance to see some of the most important European landmarks.

Bologna is home to the oldest university in Western Europe and still has a large student population. It’s a youthful city with deep roots.

The historic city centre contains hundreds of medieval towers and old public squares surrounded by cafes and shops. Outside of the central district, you’ll find charming neighbourhoods, each with its own unique style.

Need help deciding where to stay? Start comparing accommodations with this guide to the best places to stay in Bologna…

Where to stay in Bologna: The best hotels, areas & neighbourhoods

Bologna covers over 140 square kilometres and has a population of about a million people. It’s not the largest city in Italy, but it has several distinct areas to explore.

As you travel around the city centre, you’ll pass dozens of historic sites and old buildings. In the surrounding districts, you’ll discover some of the finest restaurants in Italy.

No matter where you end up staying, travelling around Bologna is easy. It’s a compact area with an easy to follow the grid-like street system. You can easily go from the old public squares in the city centre to the streets of the university district.

The best areas to stay in Bologna include:

✔ Best area to stay in Bologna for historic sightseeing and shopping

As with many travel destinations, the historic centre contains the top things to see & do in Bologna. It’s a compact area full of medieval buildings. 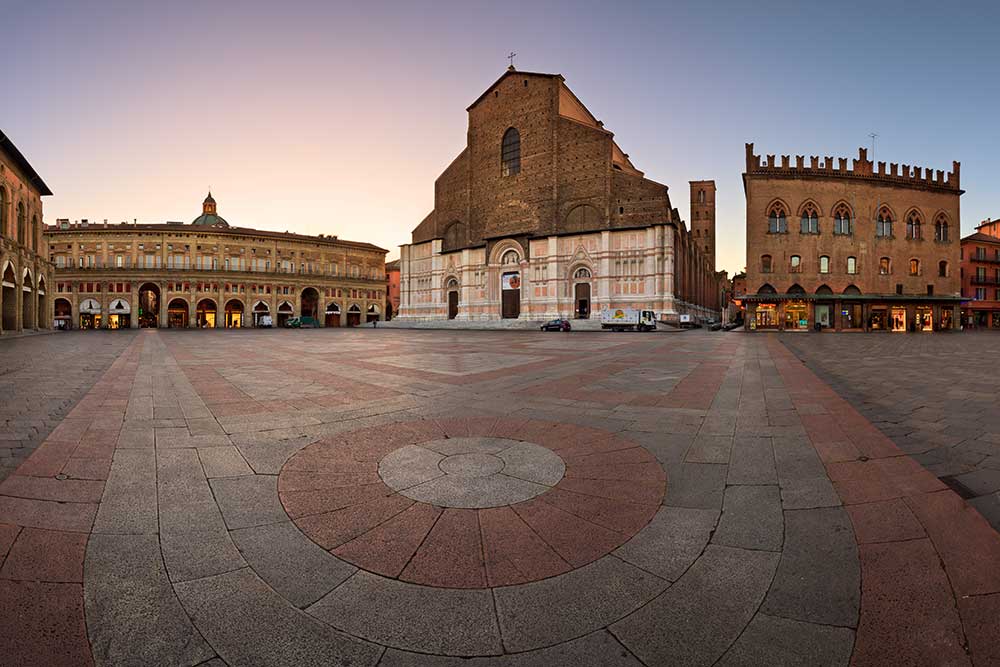 Almost every street contains an old-world charm and several historic sites. You can’t walk more than a few blocks without passing one of the hundreds of old towers or public squares. It’s also a vibrant part of the city, often filled with travellers walking around staring at the ancient architecture.

In the centre of this district, you’ll find Piazza Maggiore. It’s the main public square and hosts many local markets. You can typically find a wide variety of fresh food and delicacies throughout the year.

Other historic attractions include the various churches in the area and the impressive Fountain of Neptune. Built in 1563, the fountain includes multiple inscriptions and several additional statues.

Surprisingly, Centro Storico is also the best part of Bologna for shopping, instead of one of the more upscale suburbs. East of the main public square is several blocks of narrow, winding streets lined with markets, stalls, and small shops. It’s the best spot for shopping for antiques, souvenirs, and interesting treasures. For clothing and high-end goods, visit the streets running north from Piazza Maggiore.

Centro Storico provides a wide selection of hotels. With over a hundred options, including some of the best hotels in Bologna. Choose from affordable three-star hotels and reasonably priced four-star accommodations.

Bolognina, meaning “Little Bologna,” is one of the most diverse neighbourhoods in the city. It’s located north of the historic centre and Bologna Centrale Station.

While it doesn’t have a lot of historic landmarks, it has lots of historic architecture. Many of the streets are narrow and flanked by centuries-old structures, making it a smaller copy of Centro Storico.

Little Bologna was primarily a working-class neighbourhood for most of the 20th century. In the past couple of decades, it’s become the most culturally rich district in the city.

It has a youthful atmosphere and constant energy. No matter if you visit during the day or night, it’s always lively and full of things to see and do. As you pass the old architecture, you’ll notice graffiti and street art. You’ll also pass small covered markets and endless cafes.

Toward the outer edges of the district, the medieval architecture is slowly replaced with red brick buildings and warehouses. It’s also where you’ll find Albani Market. The partially covered produce market features painted shutters and is full of small shops selling fresh fruits, vegetables, and other foods.

Overall, it’s an eclectic neighbourhood with its own taste and style. If you want to immerse yourself in the local culture, this is the spot.

Bolognina doesn’t have the largest selection of hotels. Most of the accommodations are apartments or condos. However, you will find a few hotels close to the train station and others located toward the northern border of the district.

The Bologna Centrale Station is just north of the historic centre. The train station itself is one of the busiest in Italy. It connects with almost every major city in the peninsula. You can reach Rome, Florence, Venice, or Milan from the station and vice versa.

The city’s bus routes also include stops at the station, giving you convenient access to the major attractions. If you have just one day in Bologna, it’s a useful place to stay. You can get off the train or bus and instantly start exploring the city.

The location is close enough to each district to walk. It takes about 20 minutes to walk from the train station to Piazza Maggiore and a little bit less time to reach the main streets of Bolognina.

Part of the station was reconstructed after the 1980 Bologna Massacre. The terrorist attack destroyed part of the main lobby and killed 85 people. A deep crack remains in the main wall as a testimony to the many victims.

Thanks to the busy train station, this area has quite a few hotels. People can get off the train or bus and walk just a few blocks to their hotel. Almost all the top-rated accommodations in this area are four-star hotels with lots of amenities.

Bologna Fiera is the main business district in Bologna. If you need to check items off your Bologna itinerary, you can always hop on a bus and travel to the historic city centre. 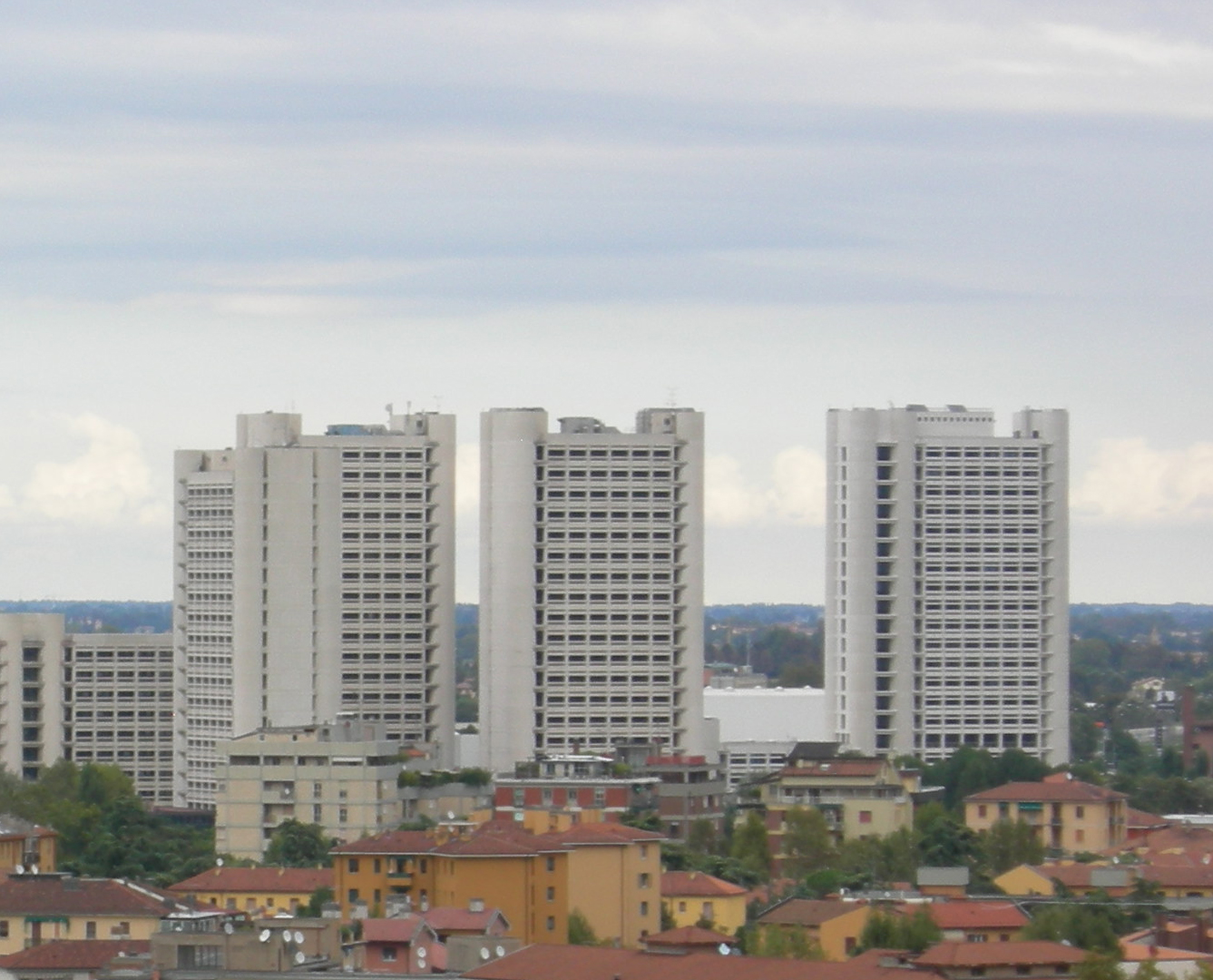 The Fiera district is mostly known for its exhibition and conference centres. Throughout the year, you’ll find various trade shows and events held at any of the three major centres. Expect to see a lot of travellers in suits and ties arriving for trade shows.

Compared to the other districts, Bologna Fiera stands out for its lack of historic sites and old architecture. The skyline mostly contains office towers and modern buildings housing large companies.
While there isn’t a lot to see or do in Fiera, it’s a good place to go to relax and get away from the busier parts of the city.

It’s also a top choice for families, due to the variety of restaurants and many parks in the area. Just south of one of the main convention centres is Don Bosco Park. It’s a large wooded park with walking paths, benches, and beautiful scenery.

This area includes many mid-range hotels with budget rates. It’s a great place to stay if you want to save some money on your accommodations, leaving more money for exploring the city. Several of these options also have their own onsite restaurants, when you don’t feel like venturing into the city.