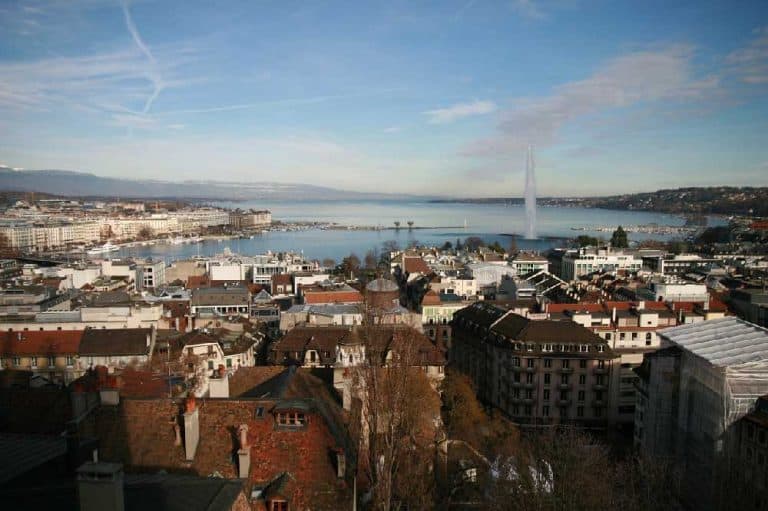 Choosing where to stay in Geneva isn’t simple, especially if you’re visiting for the first time.

Located at the southern edge of Lake Geneva, the city is surrounded by the Swiss Alps and the Jura mountains. Its majestic landscape makes Geneva one of the best travel destinations in Switzerland.

In the 1980s, Geneva was known as the Las Vegas of Switzerland, due to its rowdy nightlife scene and red-light district. Now, Geneva is a cosmopolitan city with a diverse population and a variety of attractions.

The eclectic city has museums, galleries, and historic sites along with a wide selection of restaurants, bars, and cafes to suit any taste. Before deciding upon one of the best hotels in Geneva, take some time to learn more about the top neighbourhoods.

Not sure where to look? Get started on your Geneva accommodations search with this complete guide to the best places to stay in Geneva, including the top hotels, areas & neighbourhoods…

Looking for more ideas for your trip? Check out our other hotel & accommodations guides and our Switzerland Travel Guide for recommendations on when to visit, where to go & what to do!

Best areas to stay in Geneva: The top hotels & neighbourhoods

Geneva isn’t the biggest city. You can quickly walk or bike from one neighbourhood to the next, but staying in a specific part of Geneva can change the entire mood of your trip. 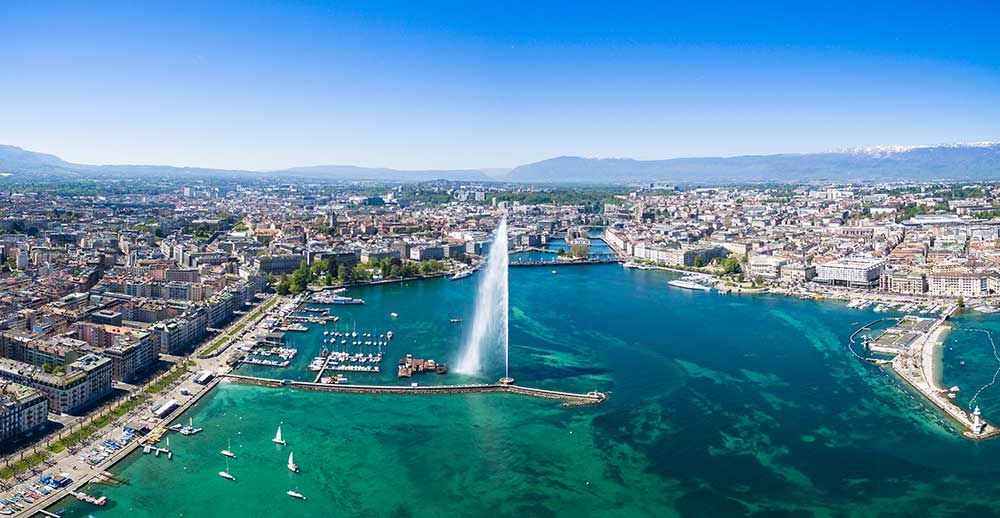 Whether you’re looking for shopping, sightseeing, nightlife, or entertainment, Geneva has it all.

Geneva is divided into two main parts, separated by the lake and the River Rhone. On the west bank of the river, you’ll find the Old Town and the University of Geneva. It’s a combination of student life and historic sites.

To the east, Geneva includes a mixture of residential districts and commercial areas. You could also stay closer to the lake and spend your time sunbathing on the concrete or strolling through the large public parks.

The best areas to stay in Geneva include:

Old Town is often the starting point for the typical itinerary, especially if you only have one day in Geneva. It’s past the upscale shopping streets near the river. 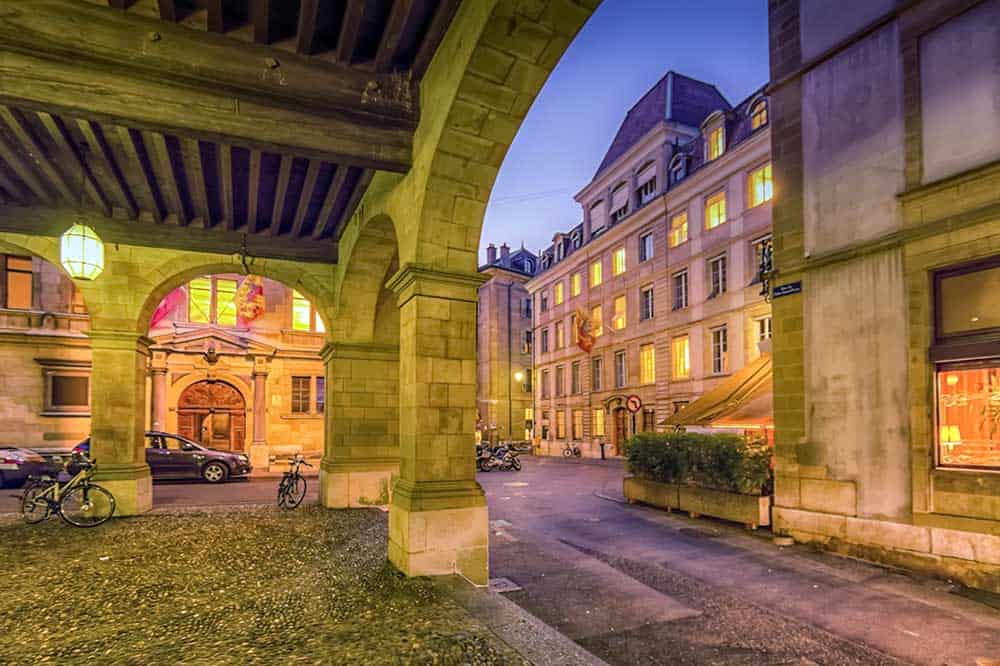 You’ll know when you reach Old Town. Instead of multi-lane roads and large commercial buildings, the area has numerous winding roads and older architecture.

Old Town is the perfect place to stroll around and explore as well as the best base for first-time visitors. Besides the expected assortment of cafes and restaurants, you’ll find little antique shops, museums, and art galleries.

If you’re looking for the top things to do in Geneva, you won’t have to travel far from Old Town. St. Pierre Cathedral and Geneva Town Hall are just a stone’s throw away.

The cathedral is impressive, with its vaulted ceilings and iconic pillars. You can even view several archaeological excavations containing artifacts from the Roman Empire.

If you don’t have the budget for high-end shopping, other parts of Old Town contain a variety of independent little boutiques. You can shop for souvenirs, Swiss chocolate, and affordable Swiss Watches.

Old Town is one of the most expensive parts of the city and where you’ll find many of the best hotels in Geneva. Luckily, several of the top-rated hotels in the area offer reasonable rates for luxurious rooms. Old Town is also an area where you’ll want to book early to lock in your spot.

✔ Top-rated neighbourhood to stay in Geneva for foodies & nightlife

Paquis is one of the most diverse neighbourhoods in Geneva. It’s a lively place located near the main train station featuring a mixture of residential and commercial areas. 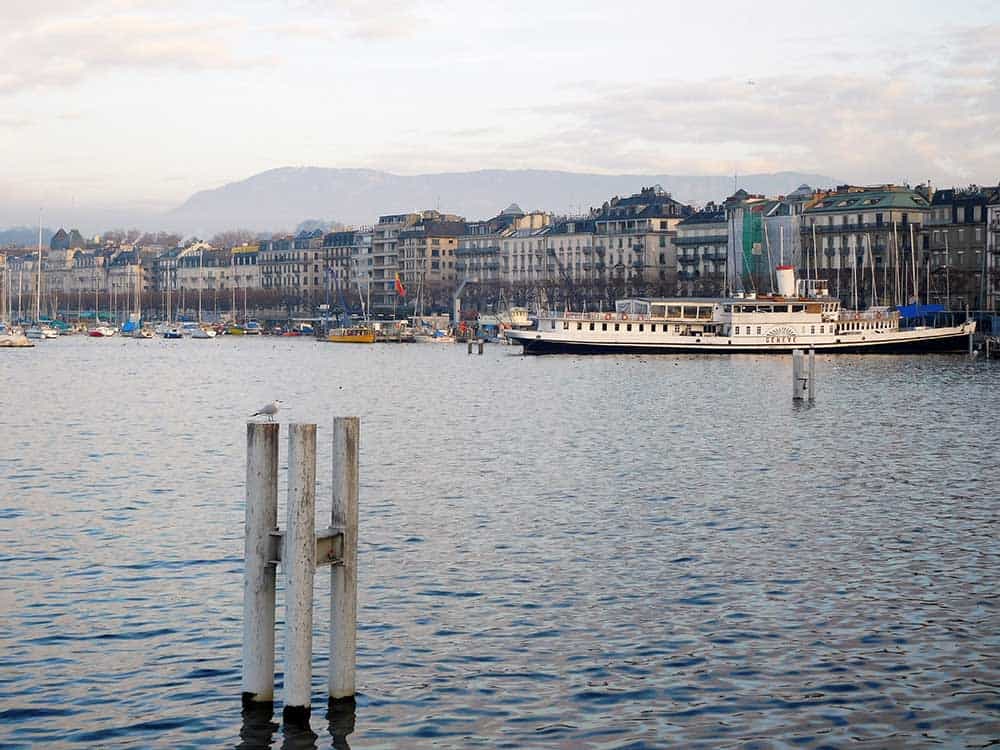 It’s not the biggest neighbourhood in Geneva, but it offers a little bit of everything. Paquis has numerous hip bars and cafes. You’ll also find upscale restaurants. Dine on local cuisine or the best foreign dishes from around the world.

The multicultural neighbourhood is known locally as the “district of a thousand flavours.” Residents of all nationalities call this area home and it’s reflected in the variety of international restaurants.

If you’re looking to experience the city’s nightlife scene, Paquis is the top choice for where to stay in Geneva. The bars and clubs stay open later in this neighbourhood and tend to attract younger crowds.

Paquis is also home to Geneva’s red-light district. It’s the only area of Geneva where some travellers may feel a little uncomfortable. Luckily, the red-light area is contained to one or two blocks.

The rest of the Les Paquis neighbourhood is vibrant, diverse, and safe. Les Paquis tends to attract artists, students, and bohemians. It’s perfect for most visitors, but families may want to consider staying in one of the other areas due to the noise and activity at night.

Les Paquis contains one of the largest selections of hotels in Geneva, covering every price point. You can find cheap budget hotels and luxury five-star hotels. Vacancies also disappear quickly, so be sure to book months in advance.

Eaux-vives remains a popular choice for families and those wanting to escape the hustle and bustle of the city centre. 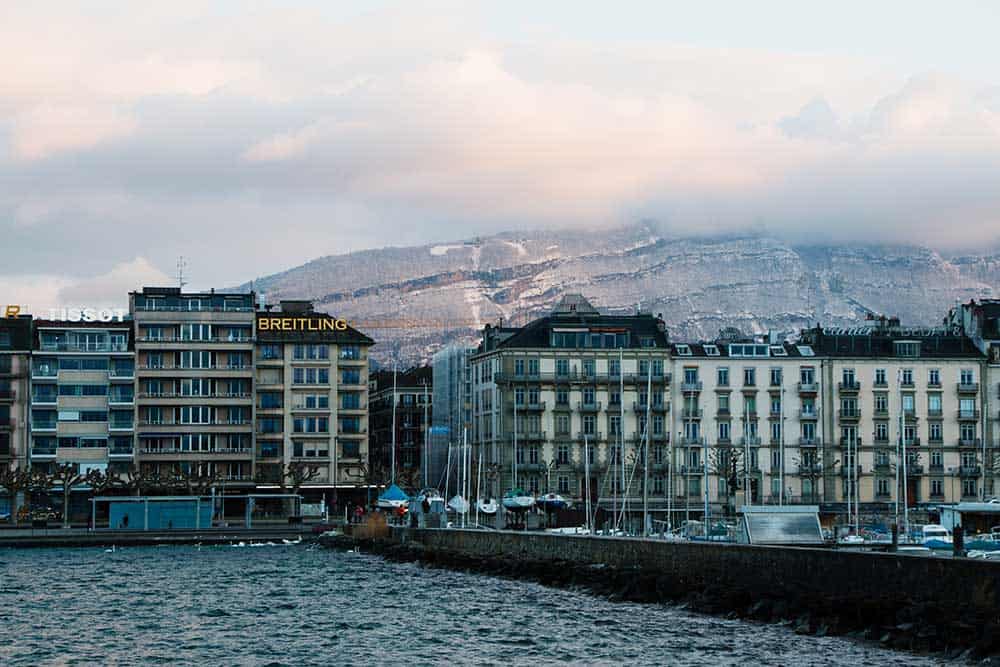 It’s less touristy compared to some of the other areas, giving you the chance to immerse yourself in the local culture.

Besides shopping, Eaux-Vives has its own attractions to check out. It’s the home of the 140-metre-high Jet d’Eau fountain. The fountain is one of the city’s most recognizable landmarks. It appears on official tourism advertisements and souvenirs.

First installed in 1886, the fountain sprays a jet of water up to 140 metres tall, often spraying unsuspecting tourists as they travel near the bank of the lake.

You’ll also find the largest park in the city. Parc La Grange covers over 200,000 square metres. It’s mostly comprised of old, tall trees, but it also has a large rose garden and an eighteenth-century villa.

Some of the hotels offer views of the lake and access to gourmet restaurants. It’s a charming area to stay with a wide selection of three- and four-star hotels near the lake. Most of these hotels also charge about half the price compared to similar accommodations in Paquis or Old Town.

✔ Best area in Geneva for shopping and budget travellers

Plainpalais is located west of the river and next to Old Town. The neighbourhood centres around a massive public square that houses the city’s largest outdoor market. 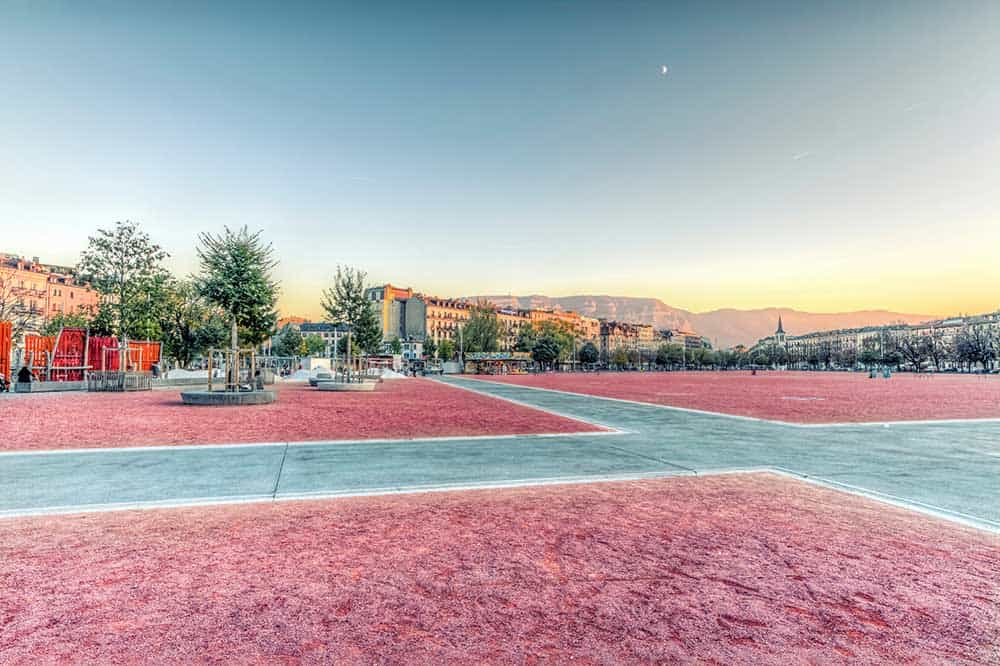 Geneva’s flea market first opened in 1970 and attracts hundreds of vendors and thousands of shoppers. The area is filled with stalls and people each Wednesday and Saturday and the first Sunday of the month.

When the flea market isn’t open, the public square is often used for large public gatherings and events. During the summer, you’ll come across various festivals.

Locals tend to refer to Plainpalais as the university district, as it’s close to the University and many of the academic buildings. Students congregate in the various bars and cafes that line the streets of this neighbourhood.

As a popular hangout spot for tourists, Plainpalais also offers some of the best prices on dining and accommodations. You’ll find cheap bars and restaurants that typically cater to students and expats.

The student population has helped bring more culture to the neighbourhood. You can find several contemporary art museums, including Nuit des Bains. This museum has exhibits that spill out onto the sidewalk.

Plainpalais has a mixture of hotel options, from affordable business hotels to upscale locations with numerous amenities and large rooms. Despite the variety of hotels, these options are all three-star hotels and tend to fill up quickly during busy tourist seasons.