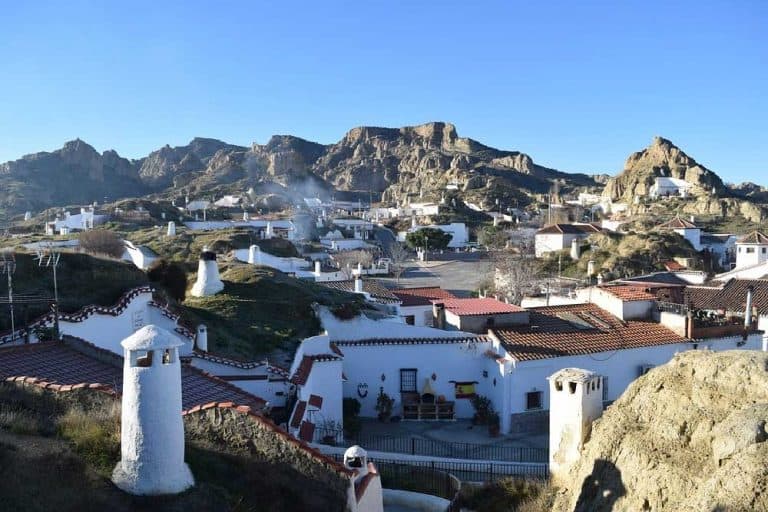 Like in any of the top travel destinations in Spain, deciding where to stay in Granada is half the challenge of planning a trip to this charming Andalusian city.

While exploring the best areas to stay in Granada, you’ll easily get lost in its narrow streets, surrounded by everything from old Arab & Islamic influenced architecture to busy tapas bars & restaurants—and, of course, some of the best hotels in Granada!

Choosing to stay in neighbourhoods on the east side of Granada gives you closer access to the historic sites; staying in the southern districts, on the other hand, places you among the best shopping & dining in the city.

Don’t know where to begin? Start searching for your perfect Granada accommodations with this complete guide to the best places to stay in Granada…

The districts of Granada are mostly centred around the oldest parts of the city, including the Realejo neighbourhood, which is the old Jewish quarter, and the Albaicin (Albayzin). Near the centre, you’ll find tight streets and a lot of old buildings featuring Moorish and Islamic architecture. 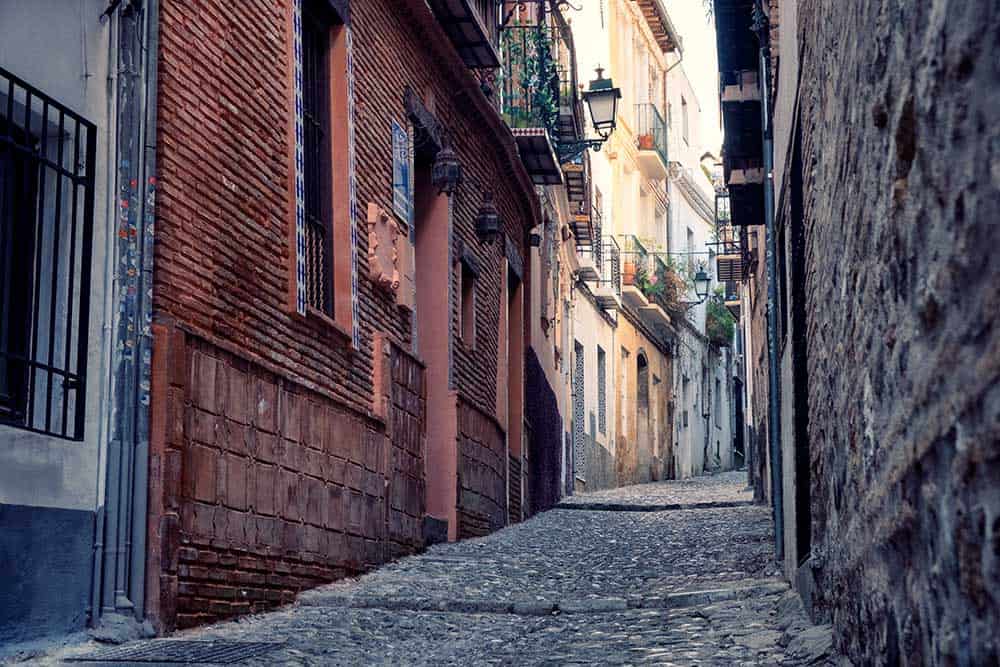 To the east is Sacromonte. This neighbourhood is built into the hillside and contains numerous cave homes, mostly owned by the large gypsy community in the area. Staying in Albaicin or Realejo places you a few footsteps from this eccentric neighbourhood.

The more modern parts of Granada are further outside of the centre. In the trendy southern Zaidin neighbourhood, for example, you’ll discover large department stores, upscale restaurants, and busy nightclubs.

No matter where you stay, you’ll be within walking distance of the old quarters and shopping centres.

The best places to stay in Granada include:

As the name implies, El Centro (Centre) is the central district in Granada. You can also walk to just about anywhere in Granada from this central point. 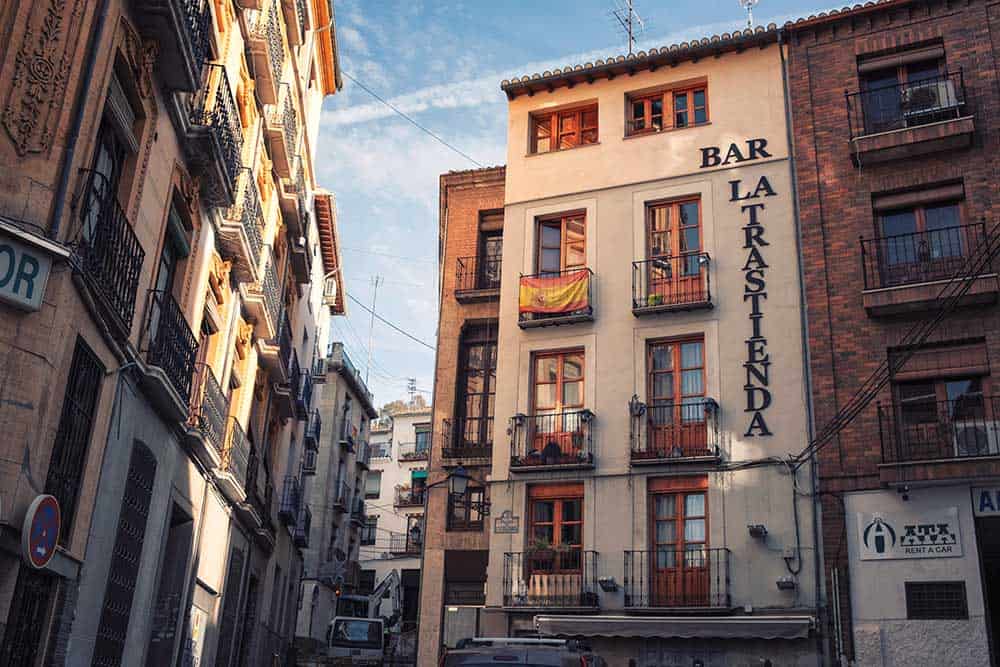 El Centro a small part of Granada and in the historic centre, surrounded by the various cathedrals and buildings that have existed for several hundred years.

Besides wearing the history of Granada of its sleeve, the centre is home to the best food market and a wide array of tapas bars and cafes. This area also includes Plaza Nueva, which is typically crowded with street performers, vendors, and tourists.

This neighbourhood is the best spot to start your exploration if you plan on checking out all the sites and are visiting Granada on a time-crunch. About ten minutes to your east is the Alhambra, and another few minutes to your west is Granada Cathedral.

Just keep in mind that this is one of the hottest destinations for tourists, which means that you may want to book your accommodations well in advance.

Recommended hotels in the Centre

Due to the coveted location of the neighbourhood, you’ll find a diverse selection of accommodations with slightly higher rates compared to the adjacent districts. These options include some of the best Granada hotels.

Albaicin is also close to the middle of the action, just northeast of the Centre. This is the oldest part of Granada and provides impressive views of the Alhambra and the tops of the Sierra Nevada mountains. 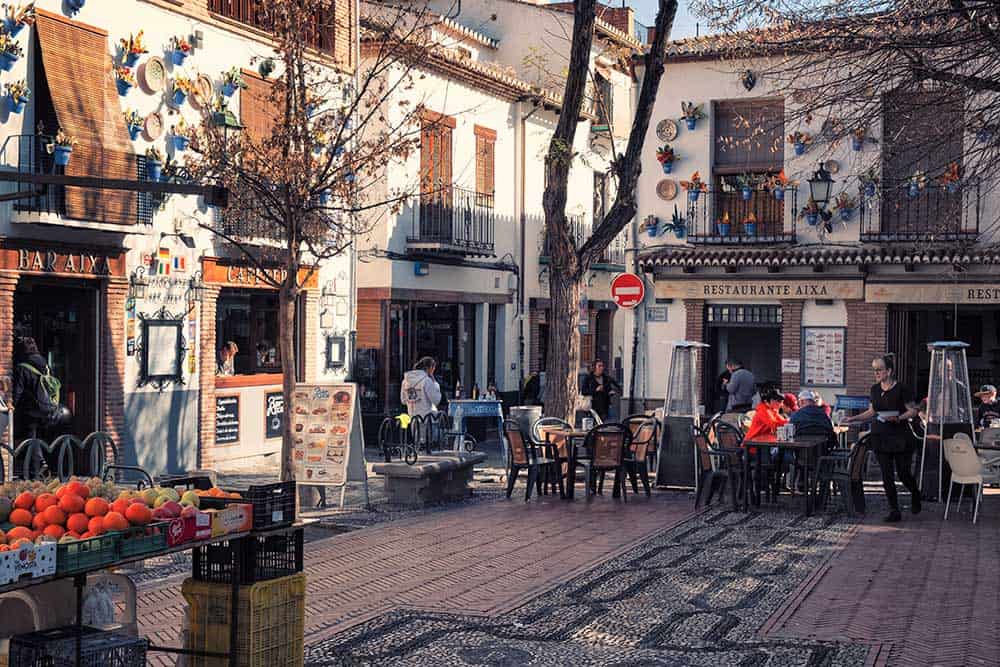 For those who want to check out the major attractions fo Granada, Albaicin is a great base of operations. There are landmarks in every direction. Most spots are close enough to travel on foot, but you may end up spending most of your time in this bohemian neighbourhood.

It’s a hilly region and includes some of the oldest architecture in Granada. The winding streets are flanked by whitewashed buildings and open public squares including the popular Mirador de San Nicolas. These squares are often full of people, cafes, and the sounds of Flamenco.

Enjoy your meals outdoors while watching people come and go through the busy square.

As the area is close to the northern part of town, you are also closer to the Sierra Nevada. If you enjoy hiking, climbing, and other forms of outdoor adventure, the Albaicin neighbourhood is a good place to start.

The Albaicin neighbourhood offers warm beds in a variety of settings. You can stay in a boutique hotel located in a restored building or sleep at one of the best luxury hotels in Granada with a sweeping view of the Moorish masterpiece of Alhambra Palace.

✔ Best neighbourhood to stay for lovers of art & architecture

Realejo is the old Jewish quarter and one of the more interesting areas to explore in Granada. This is a charming neighbourhood with friendly locals and quaint cafes. It’s also a lot like Albaicin, due to the history that it contains. 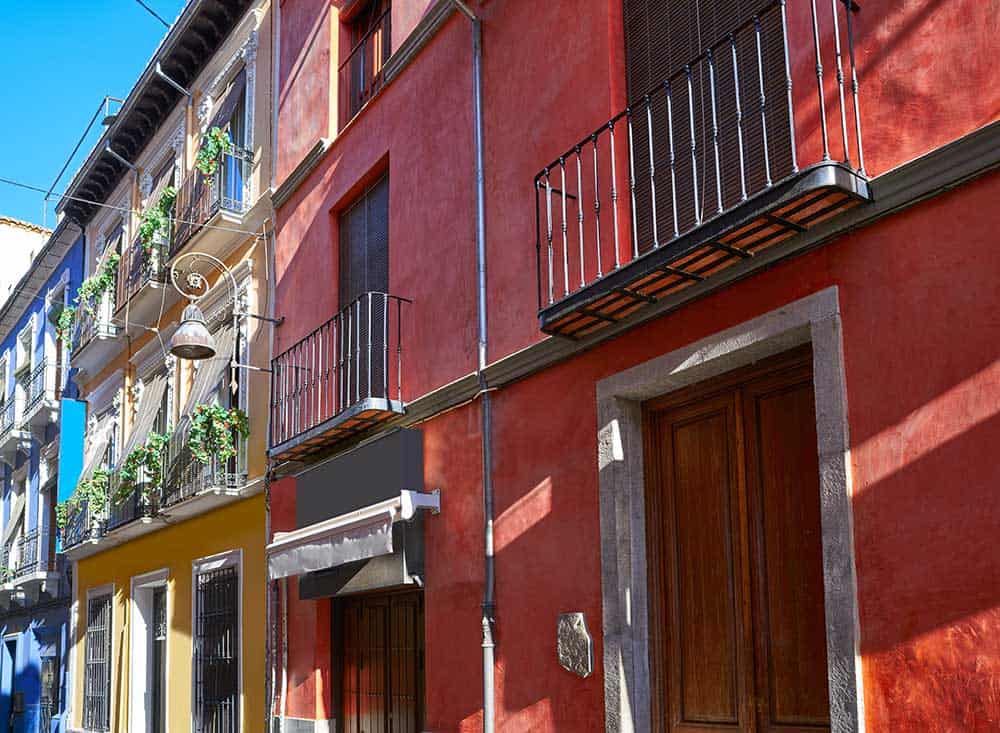 As one of the older neighbourhoods in Granada, Realejo houses a lot of older buildings. For those who love checking out examples of early architecture, Realejo is a real treasure.

Art lovers will also find something to enjoy. Raul Ruiz or El Nino, spray paints detailed artwork on many of the older buildings to give them a facelift, creating a unique atmosphere that you won’t find in other parts of Granada.

Realejo and Albaicin are right next to each other, ensuring that you’re still close enough to enjoy everything. You’re just a little further south, which puts you a bit closer to the shopping districts to the south and west of the neighbourhood.

At night, the neighbourhood is quite lively. In fact, the nightlife is one of the main reasons to stay here. Many of the bars stay open late, which provides you with endless tapas and cocktails.

Like Albaicin, Realejo offers quaint hotels in old buildings and modern hotels with all the amenities. There is even a hotel in what used to be a 17th-century hospital.

Zaidin is the furthest from the action and closest to the shopping. The Zaidin neighbourhood is known for its modern apartment blocks, department stores, and quality restaurants. You’ll be right next to Merca 80, an indoor food market with a great selection of edible treats. 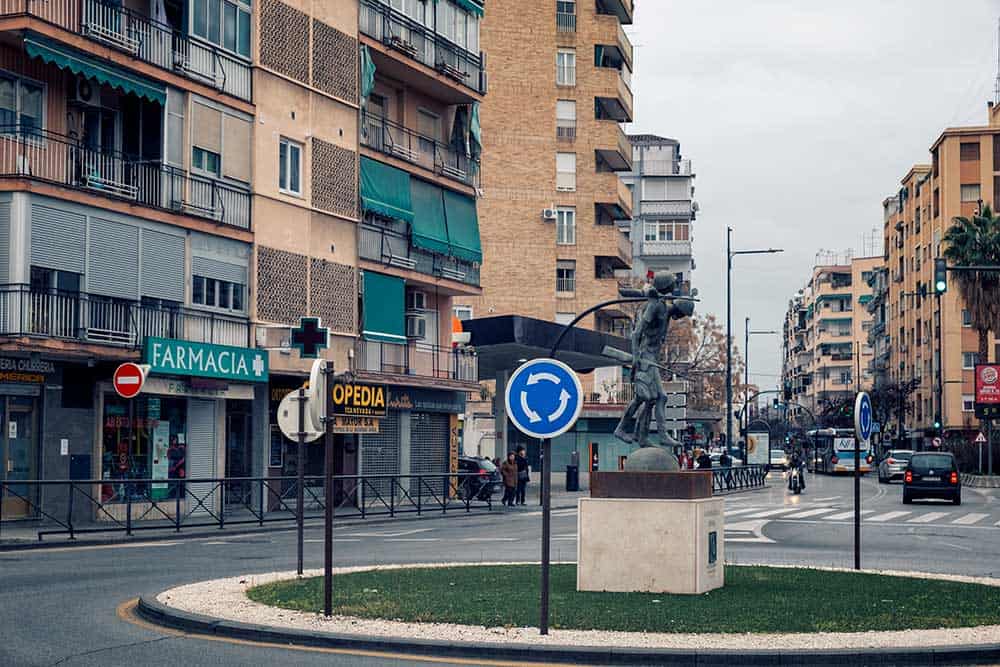 For families travelling here, this neighbourhood may feel more like home and the perfect choice for where to stay in Granada. It’s the most populous area and contains the most residential buildings.

When staying in Zaidin, you’ll notice a lot less of historic architecture than in other parts of Granada. It’s got less history and more modern conveniences. It’s also home to the Science Park Museum.

Staying in Zaidin doesn’t mean that you’ll be too far away from the Alhambra and other top things to do in Granada.

You can still walk to most places in less than 20 minutes.

Attractions in & around Zaidin: Parish of Corpus Christi, Roundabout of Aviacion Espanola, the Science Park Museum, the Parish of San Juan Maria Vianney

Zaidin is a more modern part of Granada with many recently-built hotels. There is a good selection of mid-range and luxury accommodations for solo travellers or families.