Thanks to an explosion in tourism, Kuala Lumpur has become one of the top reasons to travel to Malaysia. Hotels and resorts have popped up everywhere in the capital city. This means you’ll have hundreds of options to choose from, but you may not know where to stay in Kuala Lumpur.

Kuala Lumpur features a melting pot of cultures and a diverse range of architecture, attractions, and neighbourhoods. The skyline is crowded with towering skyscrapers, while the streets are lined with a variety of shops, markets, and food stalls.

Each area of the city offers its own distinct atmosphere. You’ll find a modern downtown area with busy streets and quiet suburbs. No matter where you stay, you’ll likely discover accommodations for any budget. With a massive public transportation system, you can also easily visit multiple areas.

Don’t know where to look? Start searching for accommodations with our guide to the best places to stay in Kuala Lumpur…

People often choose to stay in the centre of the city, as it’s the main hub of activity. However, other parts of the city also provide their own attractions and have interesting elements worth exploring. 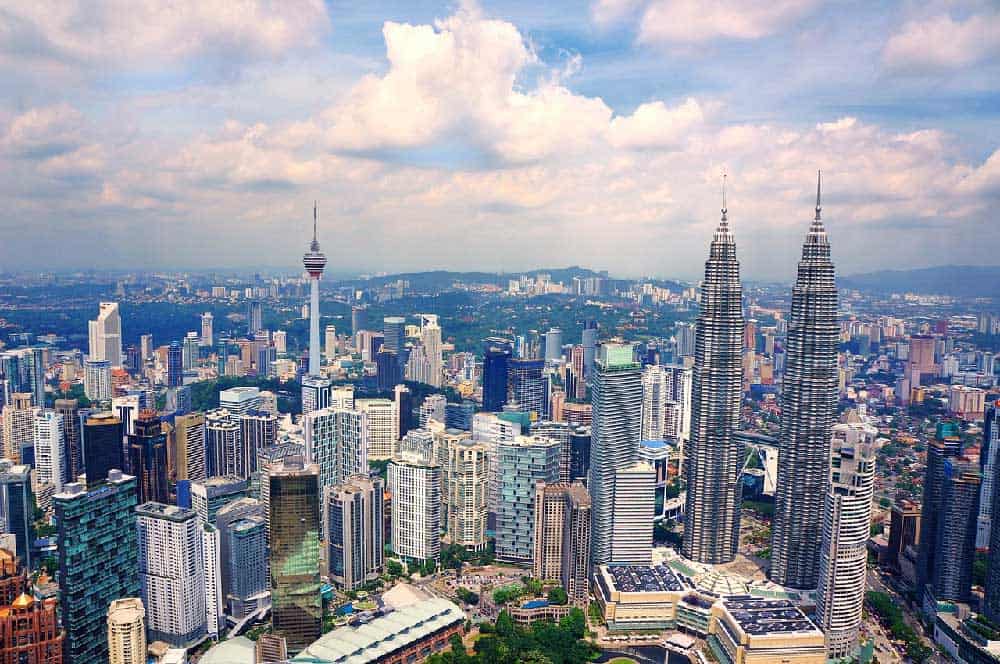 Kuala Lumpur is a large city, covering over 240 square kilometres. It’s also one of the fastest-growing regions in Asia, with an urban population of over seven million people.

A lot of the recent growth comes from the tourism industry. This also brings a large selection of hotels, restaurants, and shopping locations. The city has 66 shopping malls, with upscale retail spaces inside the Twin Towers and street markets in Chinatown. It’s an eclectic destination with something for everyone.

The best areas to stay in Kuala Lumpur for travellers include:

The city centre is the business, commercial, and cultural hub of Kuala Lumpur. It’s a busy area and home to many of the top things to do in Kuala Lumpur. You can even see most of them from the observation decks inside the Petronas Twin Towers. 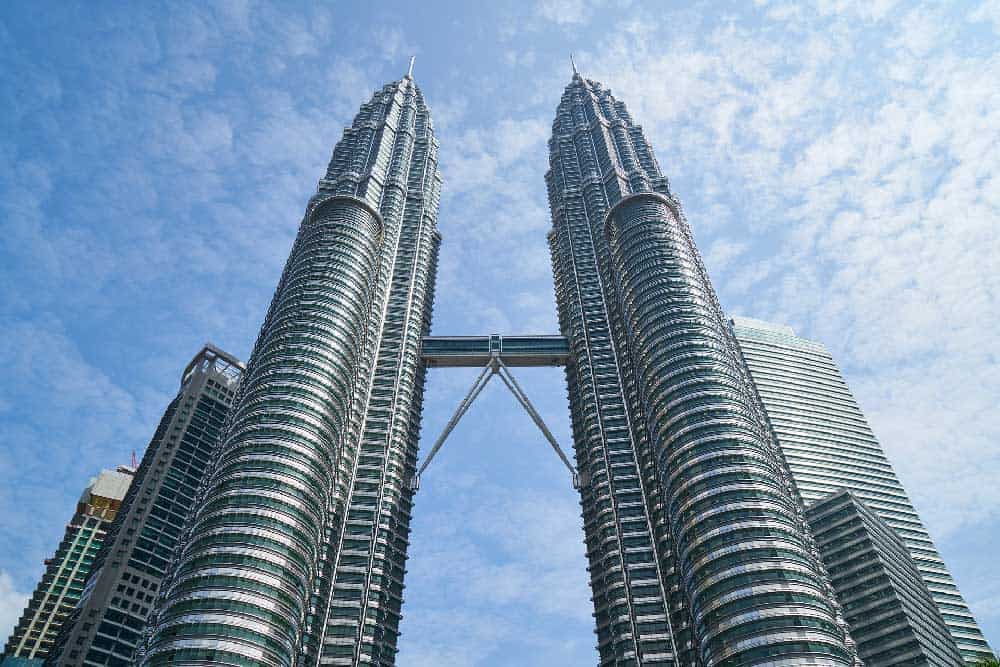 Staying in Kuala Lumpur City Center (KLCC) is a top choice for first-time visitors and families. You have easy access to the top sites. Families tend to enjoy Aquaria KLCC. The large aquarium has a 90-metre underwater tunnel, surrounding you with marine life, including impressive sharks and sizeable schools of fish.

You’ll also have the chance to browse high-end retail stores and malls before dining at luxury restaurants and lounges. While people often stay in KLCC for the shopping and dining options, this area also has several public parks.

The largest park is KLCC Park. The sprawling green area provides a peaceful escape from the hustle and bustle of the city.

In the evening, visit the park for the nightly water show. Each evening, the fountains spring to life with bursts of water timed to music. Along with water fountains, the display includes a choreographed dance show.

The city centre has the largest selection of hotels, including several five-star locations. Some of these spots offer panoramic views of the downtown area. KLCC also has a few affordable options, but without the impressive views of the city.

For those wanting to party or to experience local cuisine, a stay in Bukit Bintang is in order. This lively neighbourhood borders Chinatown and the west side of the city centre. It’s one of the most popular destinations in the city thanks to its variety of attractions and amenities. 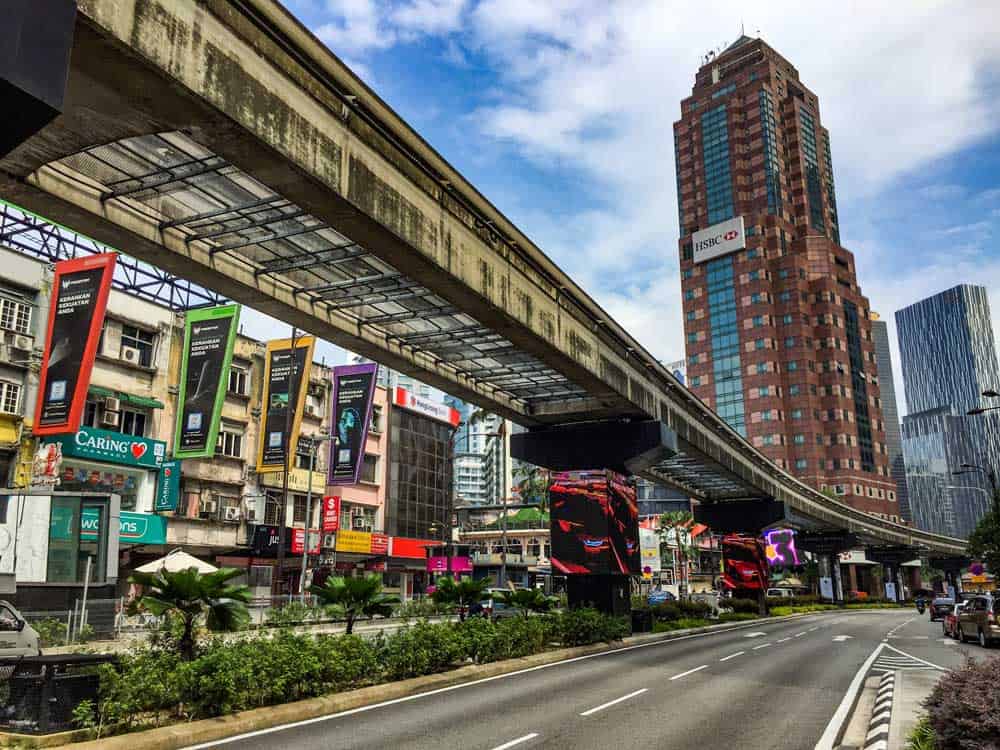 The crowded urban area has a large selection of shopping malls and cinemas. The Pavilion Mall is a major shopping complex, along with Berjaya Times Square and Sungei Wang Plaza.

If you need a new phone case, visit Plaza Low Yat IT Mall. It’s the largest IT mall in the country, with many tech shops and gadget stores.

Bukit Bintang is also known for its food. You can find everything from upscale restaurants to inexpensive street food. In fact, this neighbourhood is home to the busiest food hawker street in the city. Jalan Alor Street becomes packed each night with slightly intoxicated travellers seeking greasy street food.

When you’re ready to experience the local nightlife, walk to Changkat Bukit Bintang Street. It’s lined on both sides with pre-war colonial buildings that now house restaurants and bars. Nearby Jalan Mesui Street is more of a laid back vibe with its own selection of watering holes.

Along with a wide variety of food options, Bukit Bintang has a large selection of hotels, including some of the best hotels in Kuala Lumpur. You’ll find options for any budget, with many three-star and four-star accommodations. Most of the hotels are also within walking distance of several cafes, restaurants, and bars.

If you want to avoid the crowded streets of KLCC or Bukit Bintang, the Bangsar neighbourhood is a top recommendation. Located further from the downtown area compared to the other recommended neighbourhoods, Bangsar South is a quieter part of the city.

People frequently refer to Bangsar South as the coolest neighbourhood in Kuala Lumpur. It’s full of trendy boutiques, cafes, and bars. However, it’s not as rowdy compared to Bukit Bintang in the evening.
During the day, explore the diverse parts of the neighbourhood. Some streets are lined with small shops and art galleries, while others feature old buildings and colourful places of worship.

If you’re looking to learn more about the history of the city, visit the National Museum of Malaysia. Other cultural sites include the Islamic Arts Museum and several Chinese temples.

If you want to unwind in nature, take a trip through Perdana Botanical Gardens. The paved paths take you past a wide variety of flowers and scenic landscapes.

Staying in Bangsar still allows you to cross everything off your Kuala Lumpur itinerary. It’s further from some of the top attractions, but you can easily hop on a bus and reach any part of the city.

The upscale neighbourhood of Bangsar South doesn’t have a lot of hotels. You’ll find one or two options available, depending on the time of the year. However, there are also a few condos in the area, if you plan on staying for a week or longer.

If you’re planning one day in Kuala Lumpur, consider staying in Chinatown. It’s located in the centre of the city, west of Bukit Bintang and the downtown area. The area that is now Chinatown includes some of the oldest parts of the city. Chinese immigrants built their homes where the two main rivers connect. 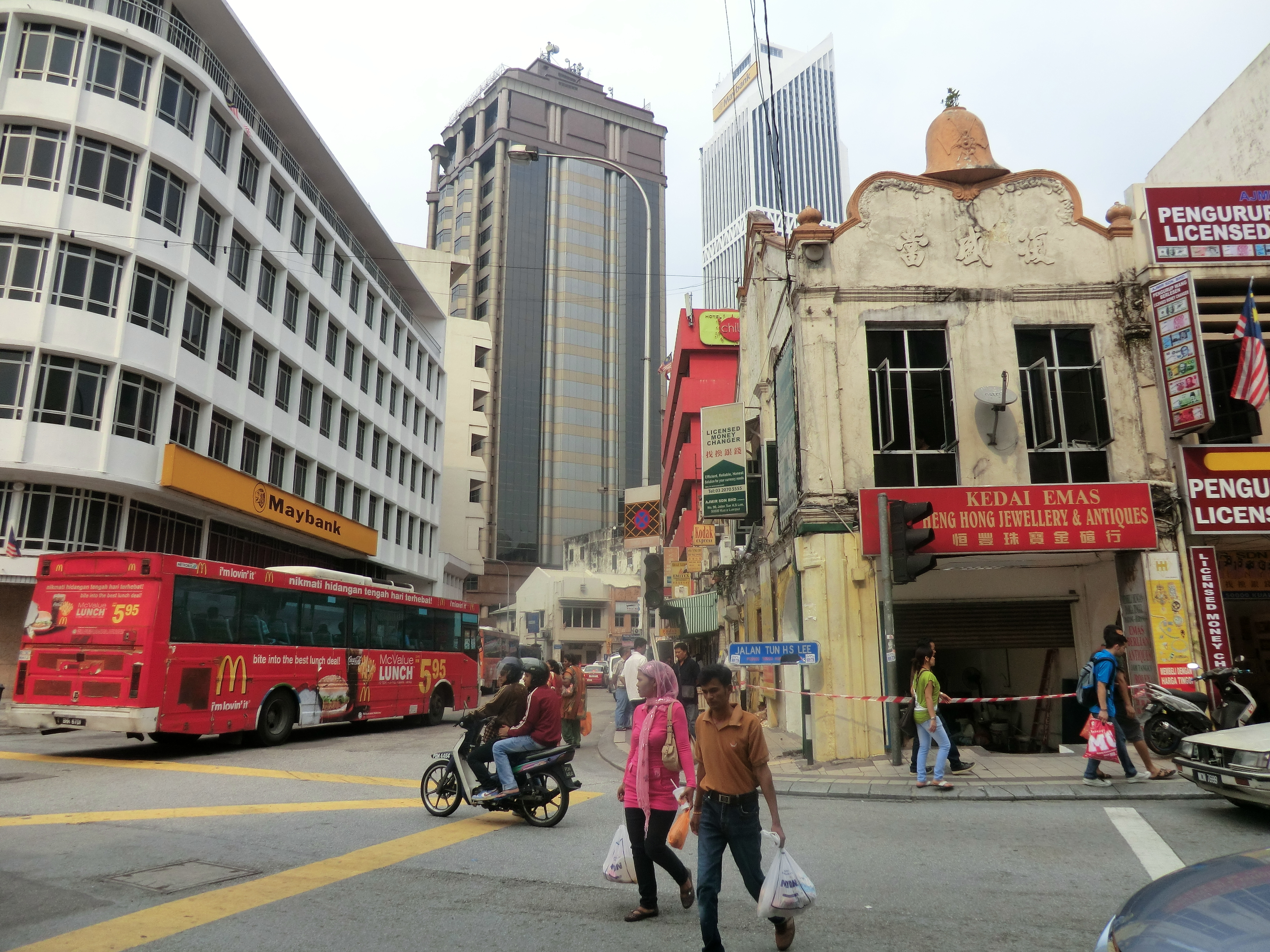 Due to the history of the area, you’ll find several historic sites, including Merdeka Square. The large square contains many colonial-style structures, built by British settlers when they first arrived in the city. The restored buildings contain shops, restaurants, and cafes.

The square stands out against the crowded alleyways that you frequently find in Chinatowns across the world. As with other Chinatowns, it’s also the best spot for street food and street markets. You can find both on Petaling Street, lined with stalls selling food, inexpensive goods, and almost anything else you can think of.

If you’re looking for more upscale shopping, try Central Market. It’s a step above the street vendors on Petaling Street, with a wide range of crafts and souvenirs.

When you finish shopping, get your cultural fix with trips to Chinatown’s temples. The area has several old temples full of colourful statues and décor.

Chinatown is considered one of the less expensive places to stay in a city that is already known for its inexpensive accommodations. Unfortunately, the area also has a limited selection of hotels, so book as early as you can.