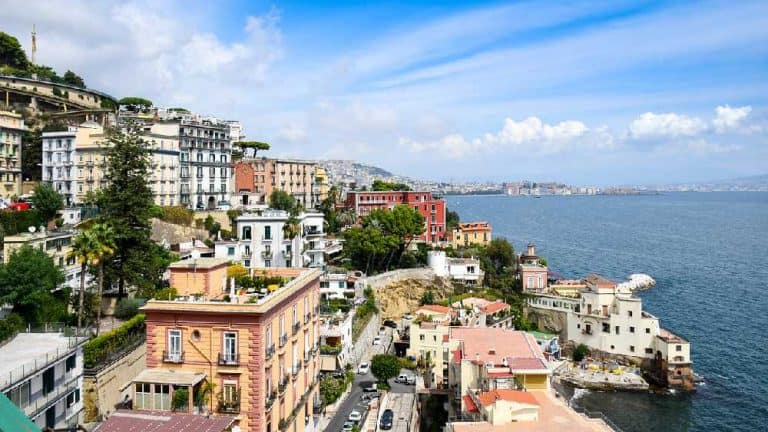 Located in the southern part of Italy, Naples is a city full of sites to discover. As you navigate the winding streets, you’ll pass ancient churches, small shops, and plenty of cafes. It’s also the home of pizza, making it one of the best destinations in Italy for foodies.

Naples also has a reputation as an edgy city. Pickpocketing and street theft aren’t uncommon in some areas. So, choosing where to stay in Naples requires some research.

It’s still a safe city and a fun place to go for solo travellers, families, or couples. Spend your time shopping for antiques or tasting the local cuisine near the waterfront. Visit museums, churches, and other cultural sites.

Don’t know where to look? Find your perfect accommodations with this guide to the best places to stay in Naples…

Where to stay in Naples: The best hotels, areas & neighbourhoods

Naples sits on the Bay of Naples near Mount Vesuvius. It’s just a two-hour bus ride from Pompeii and a few hours south of Rome, making it a great choice for a day trip or short getaway.

Tourists tend to flock to the historic centre, also called Old Town or Centro Storico. The port area is another popular spot with lots of ancient history to take in.

The older parts of the city include some of the top attractions and things to see like Naples Cathedral and other historic sites. You’ll also find cobbled streets lined with old architecture and charming restaurants with outdoor seating.

To the north and west of the bay, the city sprawls out into several neighbourhoods and districts. It includes a mixture of residential streets, college campuses, commercial strips, and industrial parks.

The best areas to stay in Naples include:

If you only have one day in Naples, stay in the heart of the city. The historic centre contains most of the historical sites. 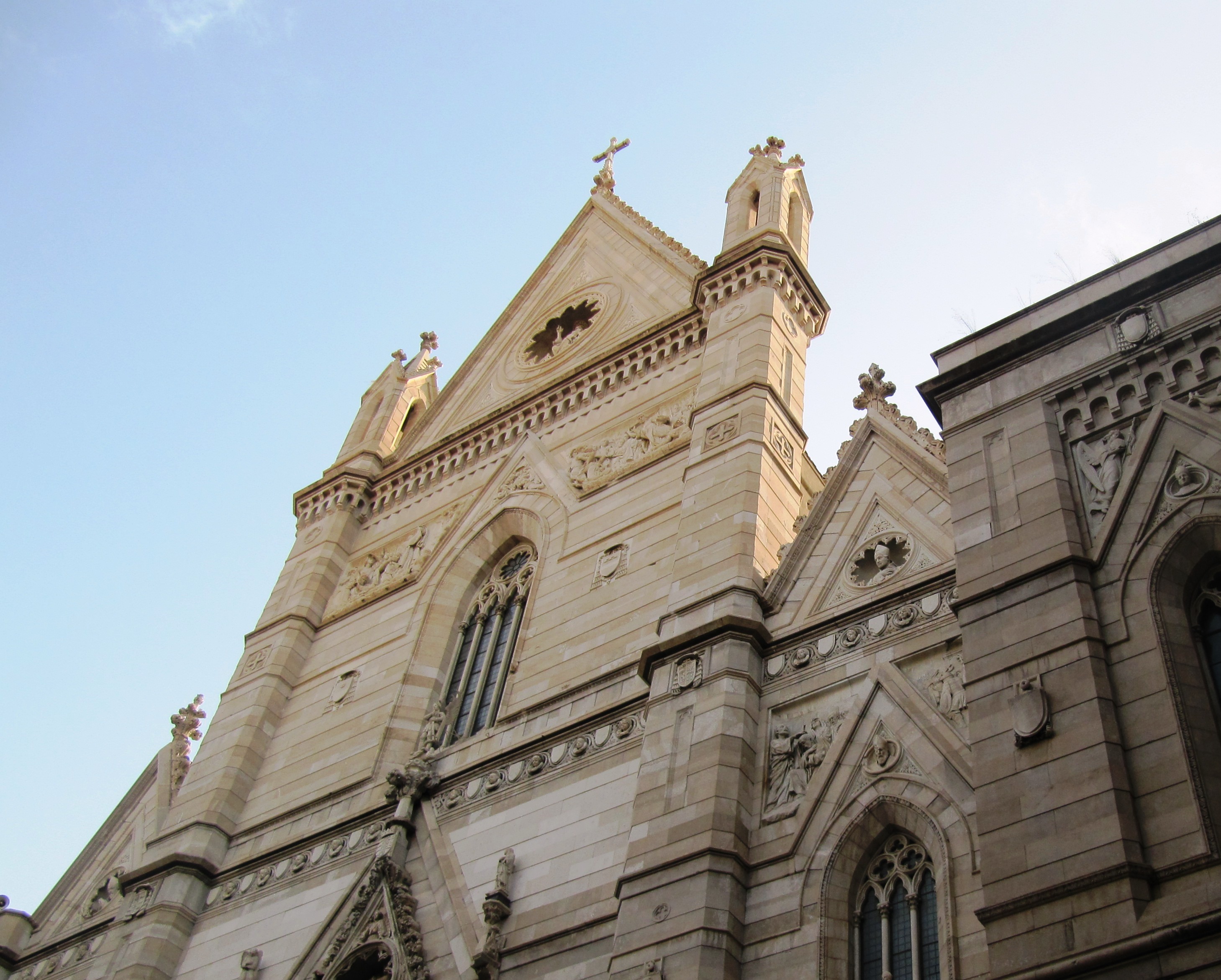 It’s one of the largest old town districts in Europe, spanning several kilometres and containing hundreds of restaurants and small shops. It’s not the biggest shopping destination in Naples, but it has a unique collection of boutiques with original items you won’t find elsewhere.

The area has been a UNESCO World Heritage site for over 20 years, due to the abundance of old buildings. As you walk the narrow stone streets, you’ll pass carefully preserved medieval houses and centuries-old churches. Within a short walk, you can visit the Church of Santa Chiara and Naples Cathedral.

A trip to the grand Naples Cathedral (Duomo) is often the first stop for visitors. Built in the 13th-century, the old building contains priceless works from famous Italian and French masters.

You also need to take a stroll on Via San Gregorio Armeno. This festive street is packed with vendors selling nativity scenes and nativity-related souvenirs.

If you grow tired of touring the historic sites, the beach is just a short trip away.

Due to the location, some of the oldest and best hotels in Naples are found in the historic centre. In fact, the area includes several hotels housed inside 18th-century buildings. You’ll also find boutique-style hotels and business hotels covering every price range.

The Port of Naples is just south of the historic centre and the Spanish Quarters, making it easy to check items off your Naples itinerary. It’s a bustling port with lots of activity, especially during the early morning.

It contains fewer historic buildings and less of the old-world charm found in the historic centre and parts of Chiaia, but has its own highlights. The Port of Naples has some of the best restaurants in the region, serving fresh seafood and large pizzas.

As most of the neighbourhoods border the port, it’s one of the more convenient areas to stay in Naples. It’s a short walk to the nearby historic churches and buildings in Santa Lucia, the Spanish Quarters, and the historic centre.

If you’re arriving in Naples from the sea or visiting for a day trip, it’s an easy place to stay. Most boats and ferries arrive at the pier near the Palace of the Immacolatella, located blocks from the old town.

At least half a dozen museums are also found within a few blocks of the sea. History buffs and amateur archeologists should enjoy this part of the city.

Attractions in and around Port of Naples: Palace of the Immacolatella, Paleontology Museum, Cappella Sansevero Museum, Museum of the Treasure of San Gennaro, Museum of Contemporary Art

Recommended hotels in Port of Naples

The Port of Naples has a variety of hotels to help make your trip more enjoyable, including several options with views of the sea or the historic streets. No matter where you stay, getting around this part of the city is easy.

The upscale neighbourhood of Chiaia is further from the historic centre, but has its own attractions, including the city’s best shopping. The streets are flanked by rows of fashion stores and boutiques selling designer clothes.

While you can find big names, such as Prada, Louis Vuitton, and Armani, the area also contains many independent stores. If you’re searching for a tailored Italian suit, Chiaia has some of the best options.

Along with high-end fashion, the area is known for its antiques. As you pass clothing shops, you’ll occasionally find a used bookstore or small shop selling old and rare items.

In the evening, take a stroll along Villa Comunale. Built over 200 years ago, the former royal garden is now a public park located near the waterfront.

As the hippest neighbourhood in Naples, Chiaia is also the place to go if you want to sit in front of a trendy coffee house and watch people walk by or visit an independent art gallery.

Chiaia is a little further from the busiest streets in Naples, giving you some peace and quiet compared to the historic centre or port area.

As an upscale neighbourhood, Chiaia contains a few of the best hotels in Naples, with several four-star and five-star options. It’s a luxurious part of the city to stay in. Expect to pay premium prices for rooms with sea views and great locations.

Plebiscito is a solid choice for those wanting to get away from the busy streets of the historic centre. The top things to see & do in Naples are still nearby, but you’ll also have access to quieter residential areas.

Plebiscito itself doesn’t have a lot to do. Luckily, it’s surrounded by the sea, the historic centre, and the Spanish Quarters.

The nearby Spanish Quarters were once the most dangerous part of the city. The area is now a family-friendly neighbourhood with a strong Spanish influence. Feast at tapas bars and learn to dance the flamenco.

After filling up on Spanish treats, spend an afternoon at the beach or explore the historic streets in the centre of the city. Several of the hotels in the area are a short walk from Piazza del Plebiscito. The main public square in the neighbourhood is a stopping point on your way to the old town.

It’s the largest public square in the city and lined with columns. In the centre stands the Basilica of San Francesco da Paola, designed to resemble the Pantheon in Rome. It’s also the site of the Royal Palace.

You’ll find a mix of accommodations in Plebiscito, including hostels, apartments, and hotels. Several of the properties feature views of the main public square while some of the more affordable options are found on the outskirts of the neighbourhood.