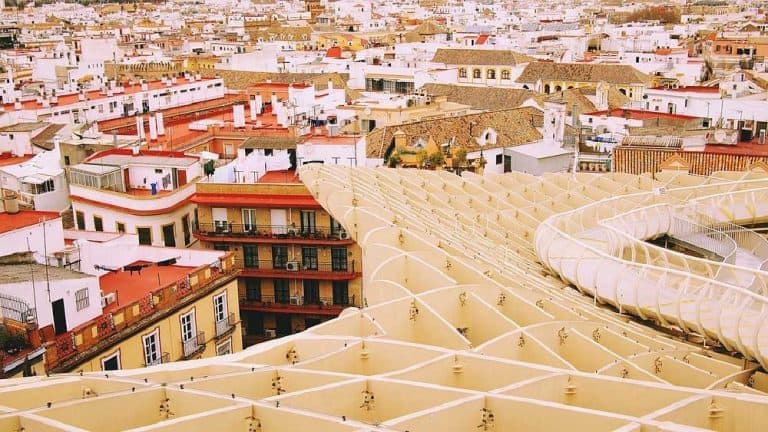 As one of the top travel spots in Spain, figuring out where to stay in Seville is as challenging as you’d expect in any world-famous travel destination. The best hotels in Seville are spread far and wide, hidden among historic cathedrals, large public plazas, traditional tapas bars, and lively festivals.

Exploring the best areas to stay in Seville, you’ll quickly discover that the birthplace of flamenco is a vibrant & charming Andalusian city full of culture, artistry, and tradition.

In terms of accommodations in Seville, there’s plenty of choice for travellers. If you decide to stay in Barrio Santa Cruz, where you’ll find some of the best Seville hotels in Seville, you’ll be closer to the city centre, but further from the hip La Macarena neighbourhood.

Need help choosing where to stay? Find the perfect Seville accommodations with this complete guide to the top areas, neighbourhoods & best places to stay in Seville…

Where to stay in Seville: Top areas, neighbourhoods & hotels

The city of Seville is full of attractions that you can marvel at, including historic buildings and crowded markets. As you travel between destinations, you’ll notice that each of the best neighbourhoods to stay in Seville has its own distinct feel. 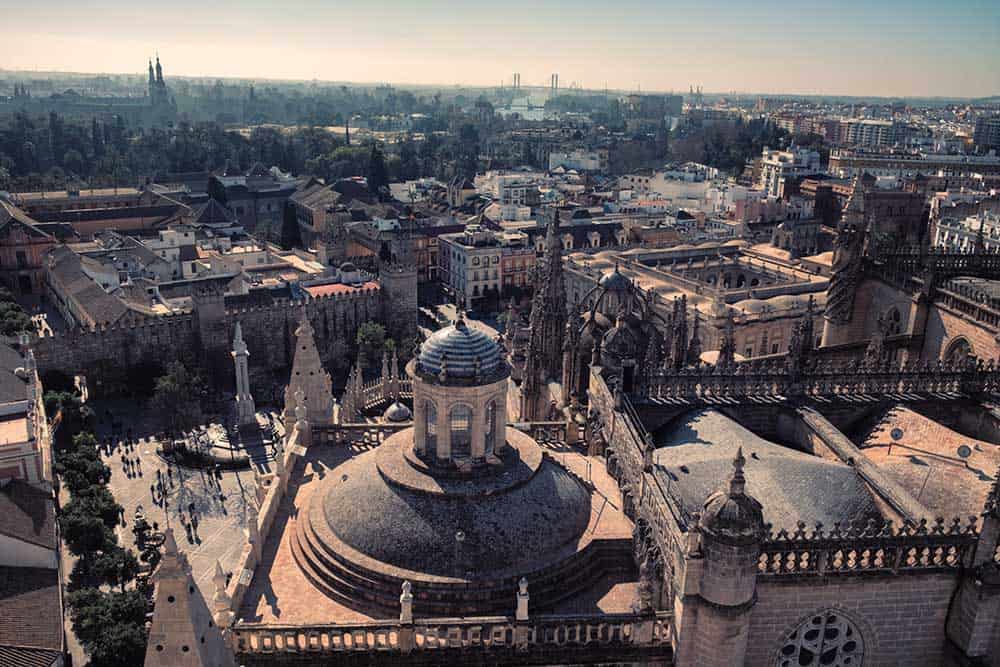 When deciding where to stay in Seville, think about the attractions you want to see and what type of trip you want to have.

Barrio Santa Cruz is considered the heart of the city and provides the closest access to the top things to do in Seville. To the west, you’ll find the bull ring in El Arenal and a variety of mid-range hotels.

Triana is across the river and the home of flamenco. It’s also got enough tapas bars to keep your stomach full and taste buds satisfied throughout your entire trip. There are also many other areas of the city to consider staying in.

The best places to stay in Seville include:

Barrio Santa Cruz is closest to the centre of Seville and one of the oldest neighbourhoods. The district was originally the Jewish Quarter and is built around the famous Seville Cathedral, a Gothic landmark. If you want to view the city’s main attractions, staying in Barrio Santa Cruz is your best option. 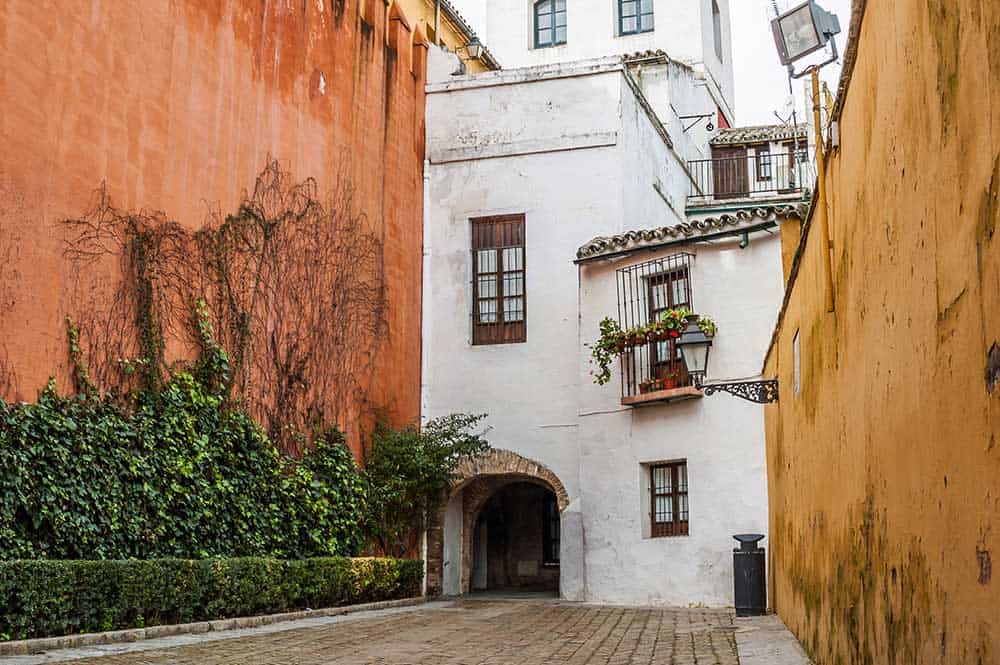 If you stay in Barrio Santa Cruz, you should be within walking distance of all the top landmarks, which is perfect if you only have one day in Seville. In fact, walking is the easiest way to get around this neighbourhood. Many of the cobblestone streets are so narrow that groups need to walk in single-file lines.

This area also includes most of Centre. Centre is occasionally considered a separate neighbourhood or lumped together with Barrio Santa Cruz.

You’ll find numerous museums, markets, and dining options. Basically, this entire area is the best choice for families and tourists who want to hit all the main sights.

You can spend your day visiting historic cathedrals and tasty tapas bars. If you’re looking for fun, this area also has a lively nightlife scene.

As the most popular destination for tourists, Barrio Santa Cruz also offers some of the best hotels in Seville and the widest mixture of accommodations. You can stay in mid-range, luxury, or boutique hotels. Just keep in mind that the prices are a little higher compared to other neighbourhoods due to the convenient location.

✓ Best neighbourhood to stay in Seville for shoppers and night owls

El Arenal is just west of Barrio Santa Cruz and is one of the best areas to stay in Seville. It’s the former port district and bordered by the Guadalquivir River. 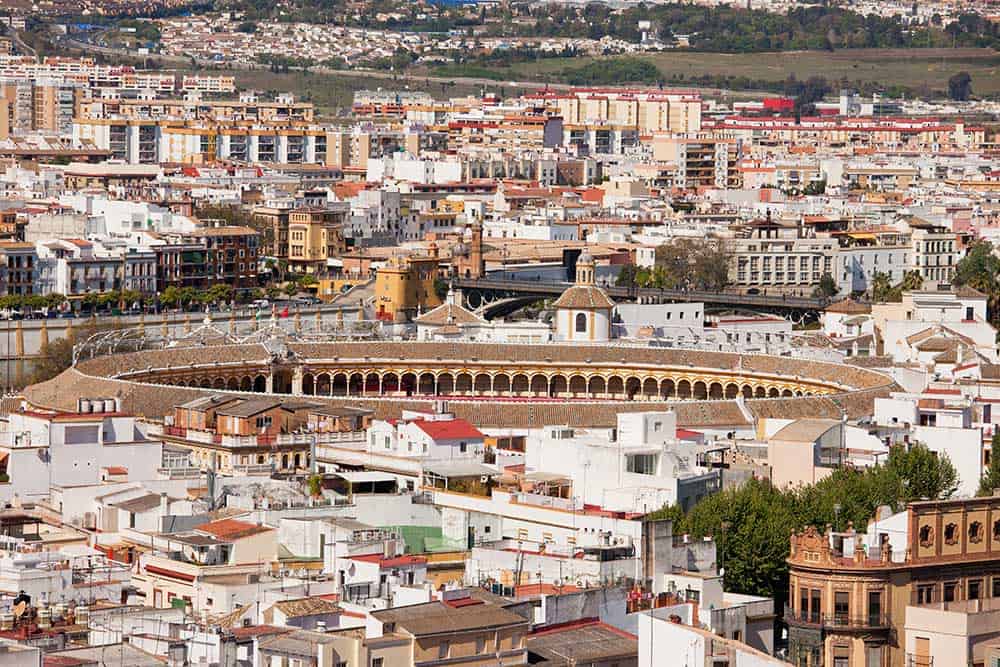 As in Barrio Santa Cruz, many of the streets and buildings are hundreds of years old. You’ll discover even more historic sites, the city’s famous bull ring, and many other great attractions to keep you busy.

You’re also still within walking distance of the neighbouring area and all its important sites.

You’re right next to the popular Calle Sierpes shopping area. Near the river, you’ll find bars, restaurants, and merchants. There is no lack of opportunities to empty your pockets and fill your shopping bags.

At night, the port area starts to come alive. The bars are typically packed, the streets become rather noisy, and there is no shortage of entertainment. You can enjoy cocktails from a rooftop terrace while watching drunken tourists stumble from bar to bar.

The hotel options are a little limited compared to Barrio Santa Cruz. If you’re expecting a five-star stay, you may need to stick to the centre of the city. El Arenal mostly offers budget accommodations and mid-range hotels.

✓ Best place to stay in Seville for souvenir collectors and dancers

Triana is on the other side of the river, across from El Arenal. 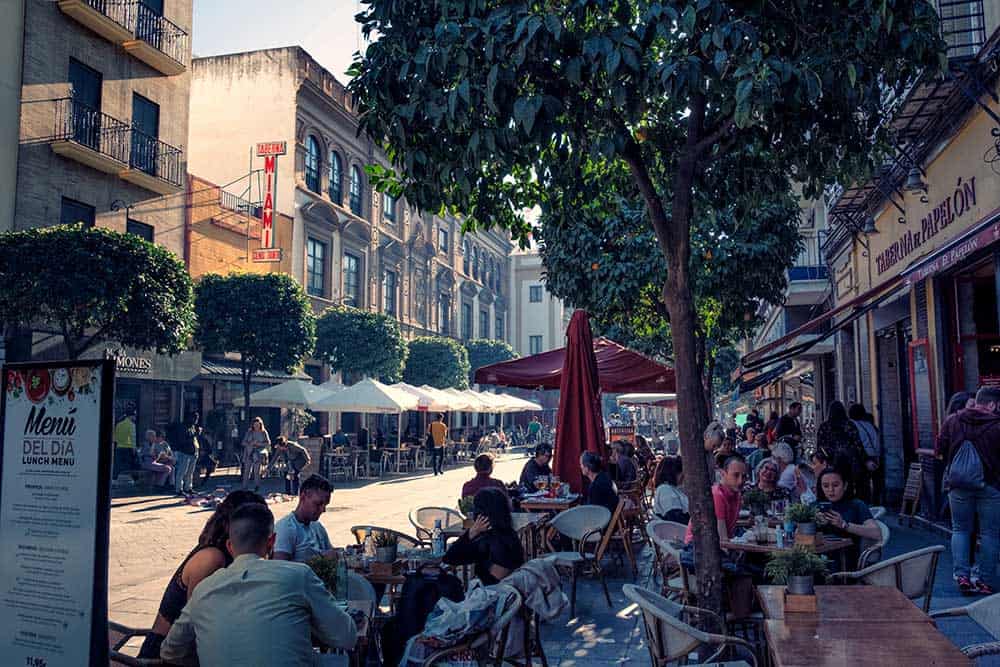 You can walk across a bridge between the two neighbourhoods, allowing you to trek from Triana to the most-visited Seville attractions during the day. Just keep in mind that it’s a long walk and your legs will likely be sore by the end of the day.

Partying, flamenco, and tapas are the main highlights of this neighbourhood.

Triana is also a little further removed from the rest of the city, lending to its distinctive flavour. The streets are more open. The area feels more like a separate European village rather than part of Seville.

The area is spread out and includes endless places to spend your money. You can get lost visiting the numerous small shops and local markets scattered throughout the district.

In a way, Triana is almost a mirror image of El Arenal. It’s a great place to shop during the day and party during the night but Triana has a more laid-back atmosphere.

You get an odd mixture of choices for hotels in Triana. The neighbourhood offers high-end establishments, budget options, apartments, and boutique hotels. If you plan to cross the Isabel II bridge to the centre of Seville during the day, you may want to find a place near the river.

✓ Recommended area to stay in Seville for thrill-seekers and families

La Cartuja is just north of Triana and includes the city’s popular theme park. It is a quieter neighbourhood with limited dining options. 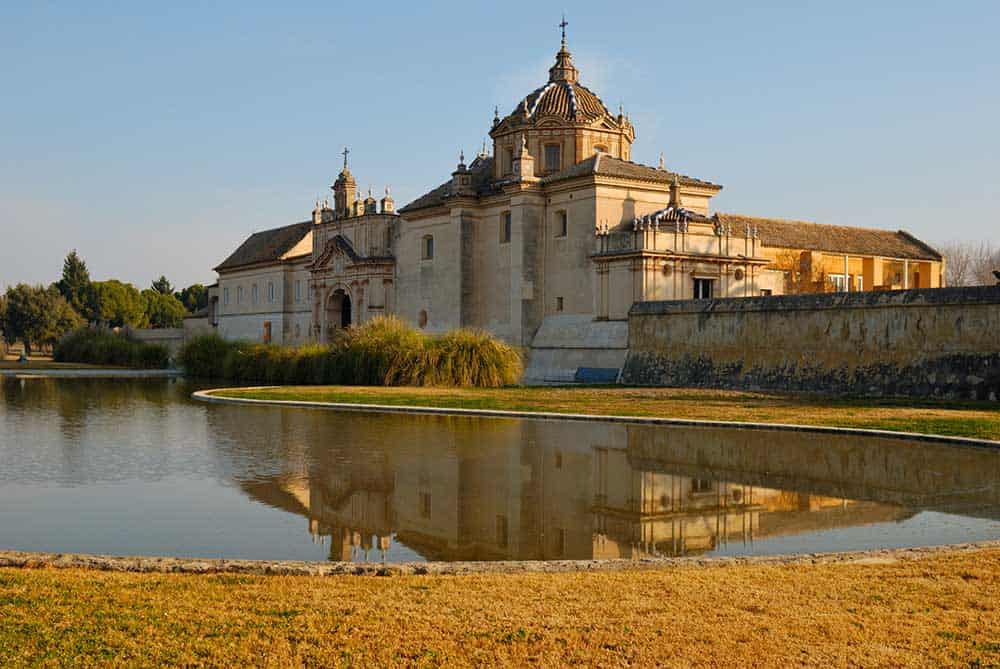 It’s also further away from the action, which means that you may need to ride a taxi or bus to get to the centre of the city.

While the district is called Isla de La Cartuja, it’s more of a peninsula surrounded by the Guadalquivir River. You can also reach most of the other neighbourhoods by crossing any of the short bridges on the east side of the island.

The main draw of the area is the theme park. La Cartuja is home to Isla Magica. You can get soaked while riding water rides or scream in terror on the roller coasters. It’s a good time for everyone, including the kids.

As a popular theme park, the prices are steeper and the park doesn’t allow outside food or drinks. Be prepared to spend more than you anticipate during your stay in this touristy district.

La Cartuja mostly caters to tourists and business travellers. Even the budget hotels offer clean, spacious rooms. A couple of options are directly across from the theme park, which may be convenient if you’re travelling with the family.

✓ Top-rated neighbourhood to stay in Seville for laid-back travellers

La Macarena is also quickly becoming a popular spot for families due to its quiet, laid-back atmosphere. It’s just east of La Cartuja and north of Barrio Santa Cruz. 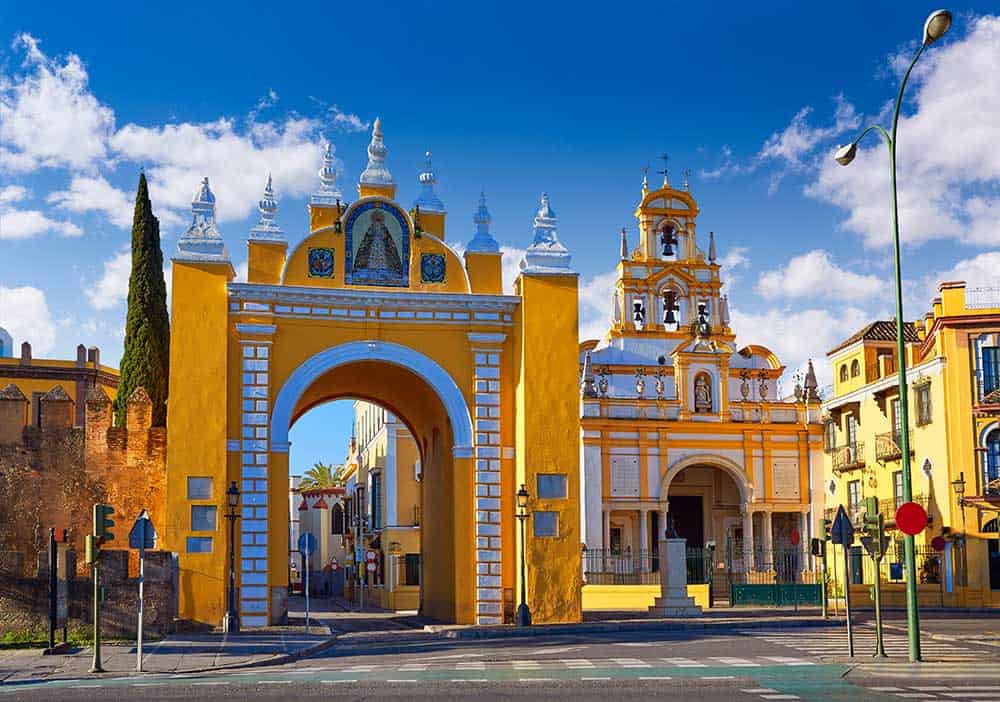 This neighbourhood includes a mixture of the old and new. Parts of the old city walls remain next to the modern buildings that have popped in the past few decades.

There is less history to experience but there is still plenty to do.

If you stay in this district, you’ll need to visit the Basilica de la Macarena, which is the namesake of the neighbourhood. The outside of the basilica is a rather plain building while the inside is a gilded spectacle containing the famous weeping virgin statue (considered a national treasure by the Spanish).

La Macarena was the poorest area of Seville but has started to attract the younger crowd. Hipsters are always a stone’s throw away as are the tapas bars. You can also walk south to Barrio Santa Cruz if you get bored of the laid-back vibe.

If you prefer budget hotels, La Macarena has quite a few options. There are also a few mid-range and high-end hotels that have been built in the past few years.

Beyond Seville accommodations: More places to stay in Spain