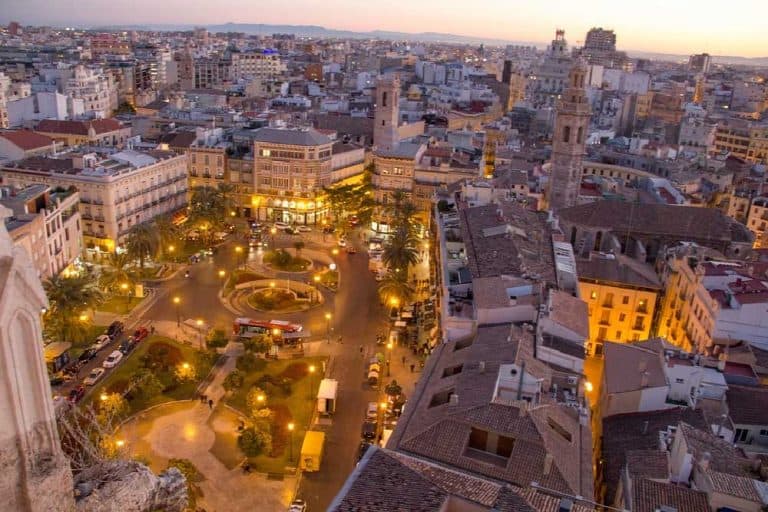 On the Western edge of the Mediterranean, you’ll find the sprawling city of Valencia. As the third-most populous city in Spain, it has a lot to offer.

Unfortunately, deciding where to stay in Valencia isn’t easy. If you stay in the wrong area, you may struggle to reach parts of Valencia on foot.

Knowing which neighbourhoods and districts to stay in Valencia can help simplify your trip. Be sure to choose a spot that places you close to the destinations that you want to visit.

Valencia offers a great variety of attractions. You can spend your time near the heart of the historic centre exploring the history of the region and local culture. Conversely, you may also want to check out the modern developments around Valencia, including the City of Arts and Sciences or the large aquarium.

Don’t know where to lay your head? Start comparing accommodations with this roundup of the best places to stay in Valencia…

Where to stay in Valencia: The best hotels, areas & neighbourhoods

Valencia is a large city and sprawls over several square kilometres. Luckily, some of the most important things to do & see in Valencia are in the heart of the city. Staying in the older neighbourhoods gives you convenient access to these sites. 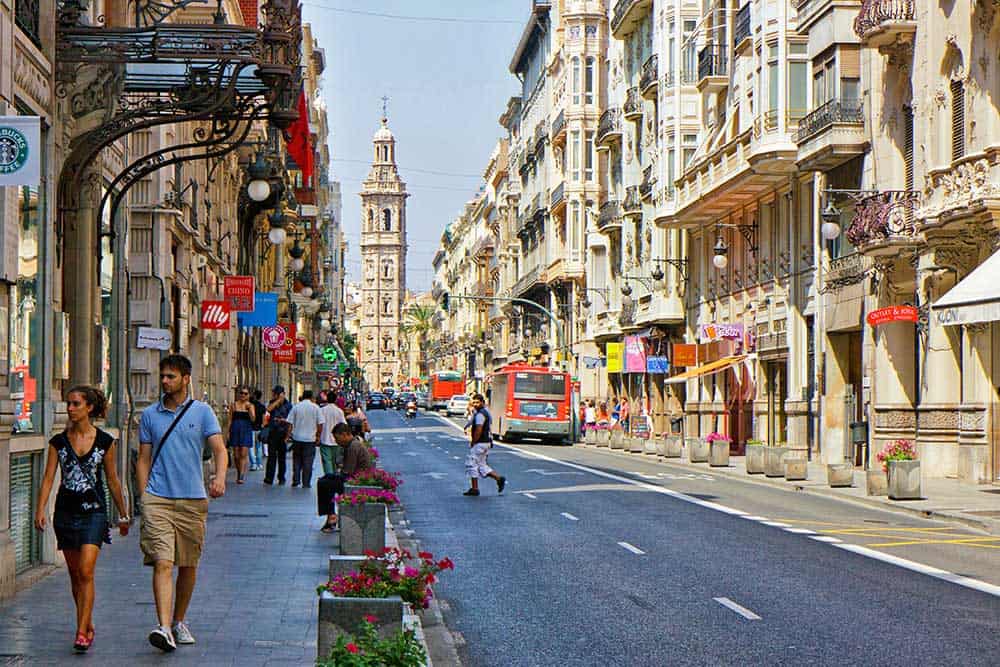 While there are many historic sites to explore, Valencia also has an extremely modern flare. The City of Arts and Sciences complex, for example, includes futuristic buildings and sprawling parks that span almost the entire city along the old River Turia riverbed.

It’s along this path that you’ll find some of the other neighbourhoods, including Ruzafa, which is the hippest area in Valencia.

If you prefer swimming and oceanside views, the port area of El Cabanyal is a top choice. It’s near the beaches and still within walking distance of the city centre. With a city this diverse finding the right neighbourhood can help ensure that you have a great time.

A few of the best areas to stay in Valencia include:

✔ Best area to stay in Valencia for sightseeing and tourist attractions

The Old Town area covers the historic centre of the city. It’s the oldest part of Valencia and home to the most notable landmarks, including Valencia Cathedral and the Central Market.

Old Town, also called Ciutat Vella, is a large part of the city that includes several smaller barrios, such as El Carmen, which sits on the northeastern border of the old district. Here you’ll find some of the most expensive hotels in Valencia, due to their proximity to the most-visited landmarks. 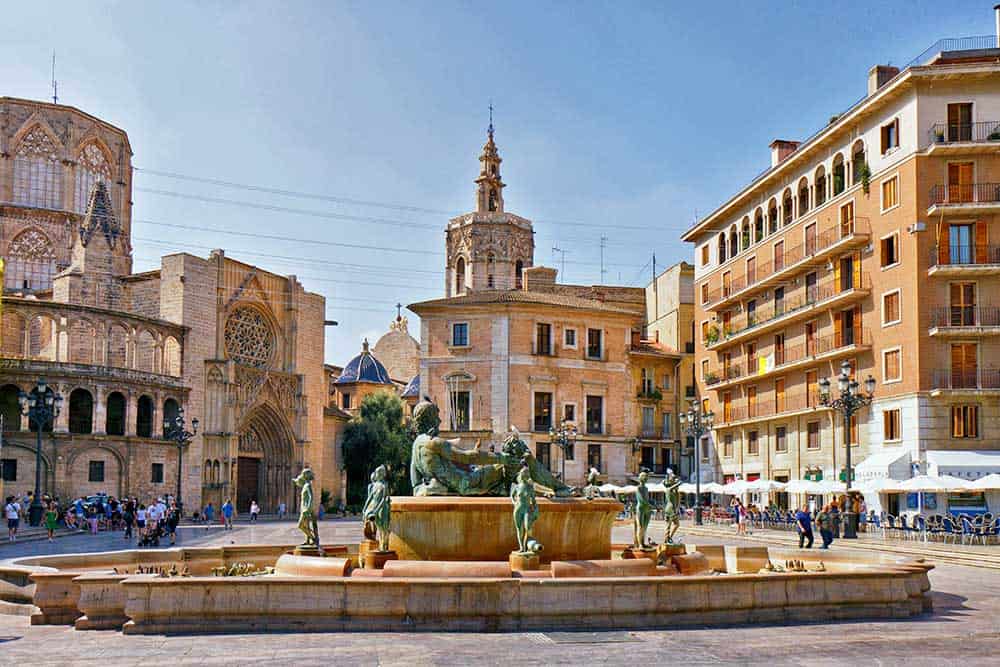 If you plan on sightseeing (or if your Valencia itinerary is tight for time), staying in Old Town places you the closest to all of the sites that you’ll want to explore. You can easily walk from your hotel to any of the main attractions. In fact, you may be able to check out just about everything in a single day.

Besides historic buildings and the large Central Market, this neighbourhood is a great choice for where to stay in Valencia as it includes many cool cafes, boutique shops, and street art. In the evening, it’s a vibrant section of Valencia, with people and live music spilling out of the numerous bars and clubs.

Next to El Carmen is Barrio La Seu, which is considered the oldest area. It’s got more souvenir shops and businesses that cater more to the tourists than any other spot in Valencia.

Some of the best hotels in Valencia are found in Old Town. You’ll mostly find high-end boutique hotels catering to travellers who prefer luxury over value. A couple of these options are just a few blocks from Valencia Cathedral.

✔ Top area to stay in Valencia for hipsters and student travellers

Eixample is an area just southeast of the old city. This district was built in the 19th century, so there are still many older buildings in the area, but it also has a little more of a modern feel compared to the city centre.

In Eixample, you’ll find the main train station, upscale restaurants, and some of the most popular cafes and bars. Within this district is the Ruzafa neighbourhood, which was once considered the edgier part of town. In the past few years, it’s started attracting more hipsters, giving the area a more laid back vibe. 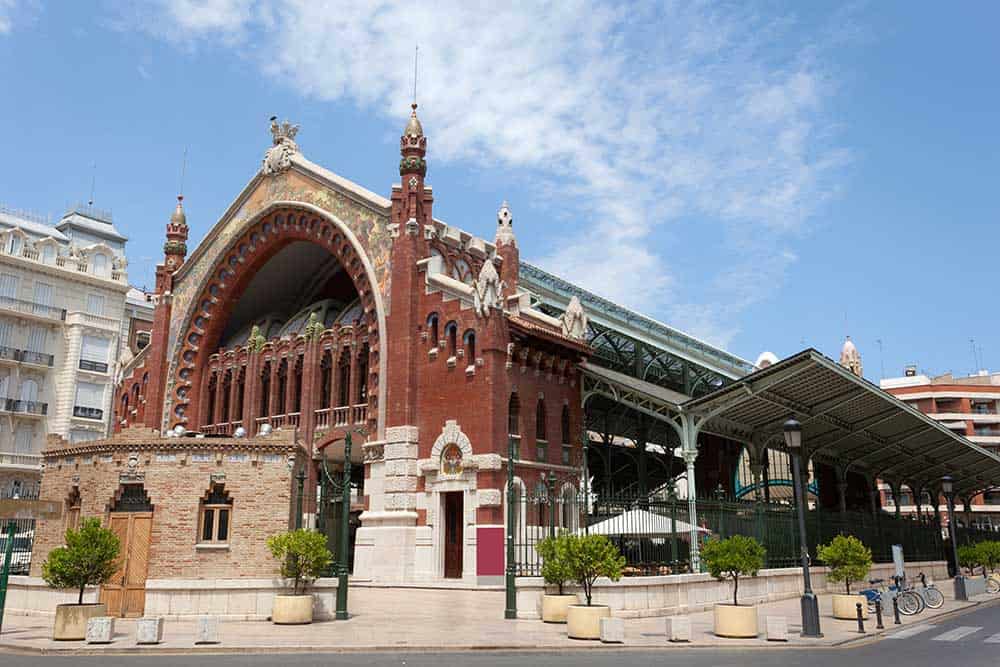 Thanks to the influx of hipsters, the area has many experimental art installations and museums, along with a surprising number of cupcake bakeries. If you’re into eclectic things, you’ll love this neighbourhood as you embark on your quest for where to stay in Valencia. It’s also got specialty cafes, including vegetarian-friendly cafes.

To the east of the district, you can see the tops of some of the buildings that comprise the City of Arts and Sciences, reminding you that you’re not far from the modern developments. This also keeps you centrally located between Old Town and the beaches.

As Eixample is a little further from the centre, you’ll find a greater range of hotels. There are still luxury accommodations, along with a few more affordable choices. Many of these Valencia hotels are on the outskirts of Eixample, as the middle of the district is mostly residential.

✔ Best neighbourhood to stay in Valencia to get away from tourists

The diverse neighbourhood of Benimaclet was once a separate city, before getting annexed by Valencia in 1972. It’s now a popular destination for students as it’s home to many university buildings.

Benimaclet is on the north side of the old River Turia, which places you just a little further from the old district. If you want to get away from the crowds of tourists that line the streets of the other districts, this area is a nice retreat. You’re still connected to those areas via public transportation, so you’re never too far from the action. 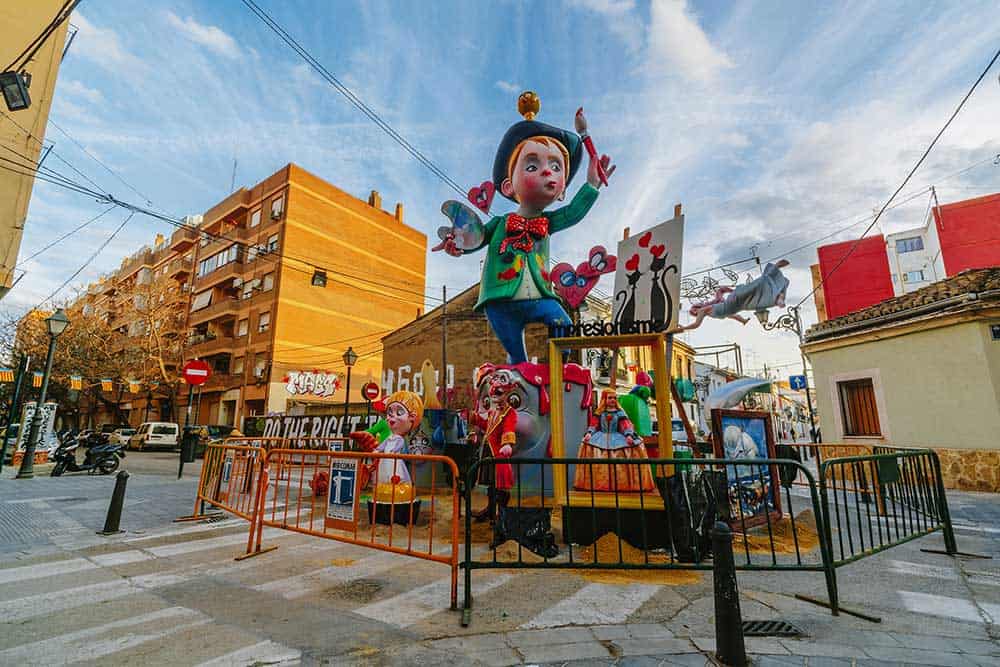 During the day, Benimaclet is a quiet neighbourhood. At night, the bars and concert venues come to life. These are some of the most popular destinations for the younger crowd, especially students.

In the middle of the district, you’ll find the main church square. This square remains a common meeting point for locals and tourists. It’s also the focal point when local festivals are in full swing.

The area contains a mixture of the old and new. Some of the streets still look like the streets of the old district, while others have been completely revamped. Overall, it’s a charming area, even if it’s slightly further from the typical tourist hotspots.

Attractions in & around Benimaclet: Museum of Informatics, University of Valencia, Natural History Museum

Benimaclet is mostly a residential and campus area, which makes it hard to find hotels. Most of your options are located around the outskirts of the district, but still within walking distance to the city centre.

✔ Top district to stay in Valecnia for swimming and beachside parties

El Cabanyal is mostly a residential area, but it’s also right behind Malvarrosa Beach and the promenade. Near the beach, there are dozens of eateries, cafes, late night bars, and souvenir shops.

Like Benimaclet, this district was once its own city. It was eventually annexed by Valencia and has grown to become one of the more eclectic neighbourhoods. 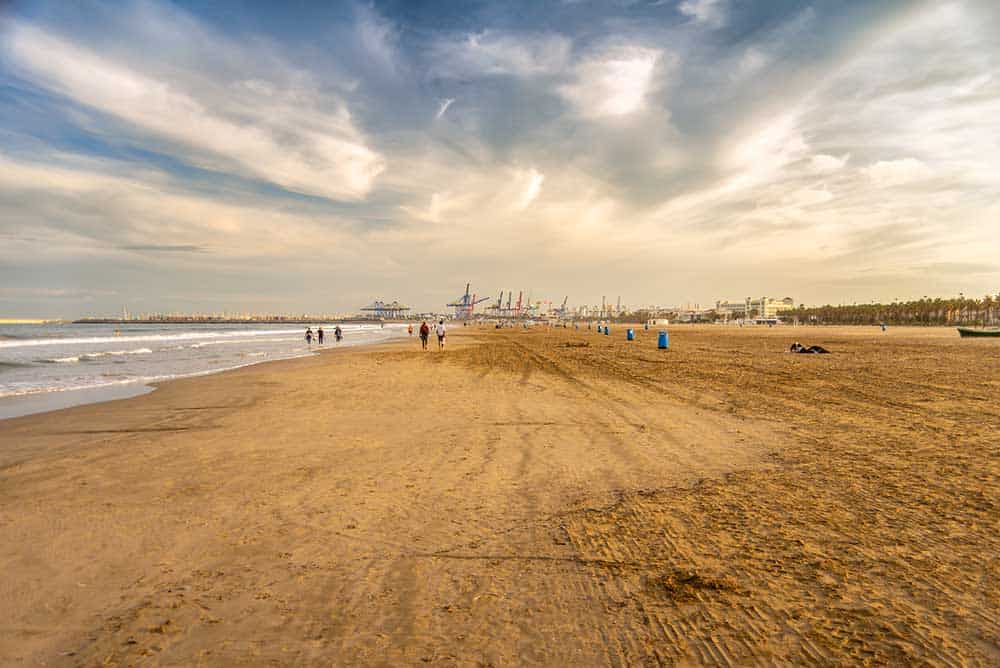 This area is great for swimming or simply spending time on the beach. It’s also one of the busiest areas for younger travellers, as the beachside bars tend to attract those looking for a good time.

While partying near the beach is one way to spend a trip to Valencia, El Cabanyal has more to offer. The area behind the beach is less touristy. It’s got a more residential vibe.

The houses and buildings in this area are colourful and tend to feature a modernist style that sets the neighbourhood apart from the rest of the city. If you want to get a real taste of authentic Valencian life, this area is one of the top choices for where to stay in Valencia.

If you want to spend most of your time in the water or the near the surrounding port area, you’ll find several great options in El Cabanyal that overlook the beach. Keep in mind that the area mostly offers high-end resorts and mid-range beachside hotels.

Beyond Valencia accommodations: More places to stay in Spain