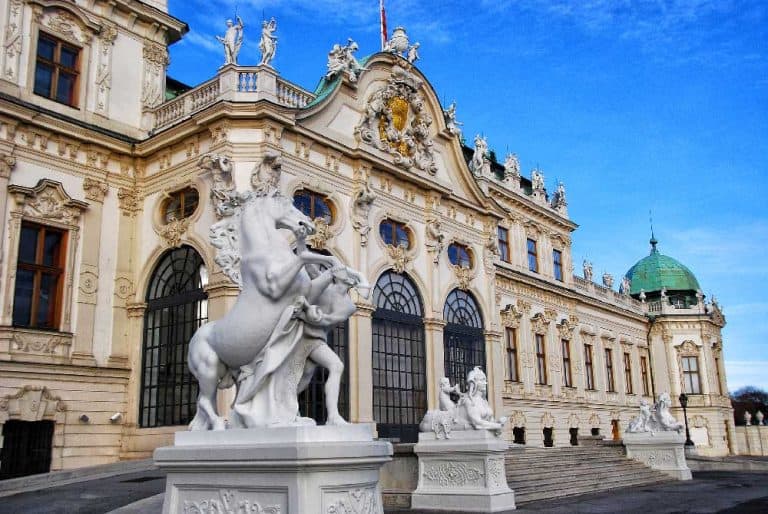 As one of the top travel destinations in Austria & in Central Europe, choosing where to stay in Vienna isn’t always easy. The Austrian capital attracts millions of visitors a year and covers over 400 square kilometres, sprawling out from the city centre on both sides of the Danube river.

Fortunately for travellers, many of the best hotels in Vienna sit in & around the city centre. These areas include the historical Innere Stadt (also known as the Old Town or 1st District), where you’ll discover Vienna’s baroque architecture & rich cultural legacy including several famous museums, medieval cathedrals and imperial palaces.

Not sure where to begin? Get your Vienna accommodations search started with this guide to the best places to stay in Vienna including the top areas, neighbourhoods, districts, and hotels for travellers…

Best places to stay in Vienna: The top neighbourhoods & areas

Vienna is not a small city. It includes over 23 districts, called Bezirke, each with its own distinct flair.

The most well-known area is the Innere Stadt (Old Town). This is where the city boundaries ended until Vienna expanded in 1850.

In the oldest part of the Vienna city centre, you’ll find narrow streets separating old buildings and historic sites. Most tourists start their trip to Vienna, but there are other areas to explore. 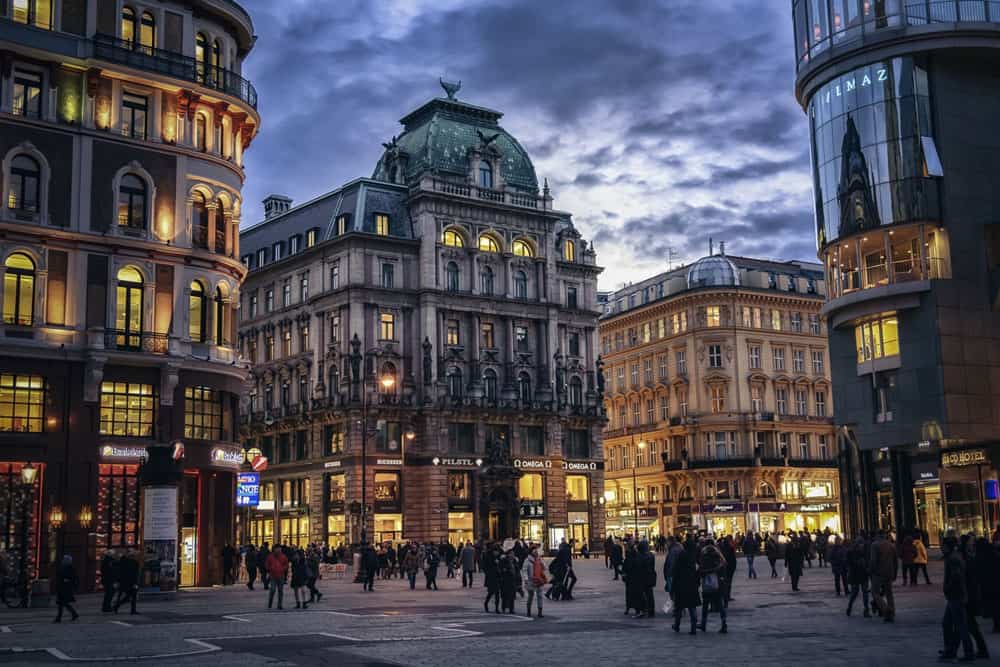 If you stay anywhere outside Vienna Old Town, just keep in mind that you may need to rely on public transport to get around. While the inner city of Vienna is walkable, the outer districts cover a lot of ground.

Some districts are mostly quiet residential neighbourhoods. Other areas in Vienna are more commercial such as Landstrasse with its selection of shops and coffee houses.

The best areas to stay in Vienna include:

✔ Best area to stay in Vienna for sightseeing & culture

Old Town is the centre of Vienna and where you’ll find the top attractions in Vienna. Also called Innere Stadt or 1st District, this is the original Vienna and the most popular tourist area. 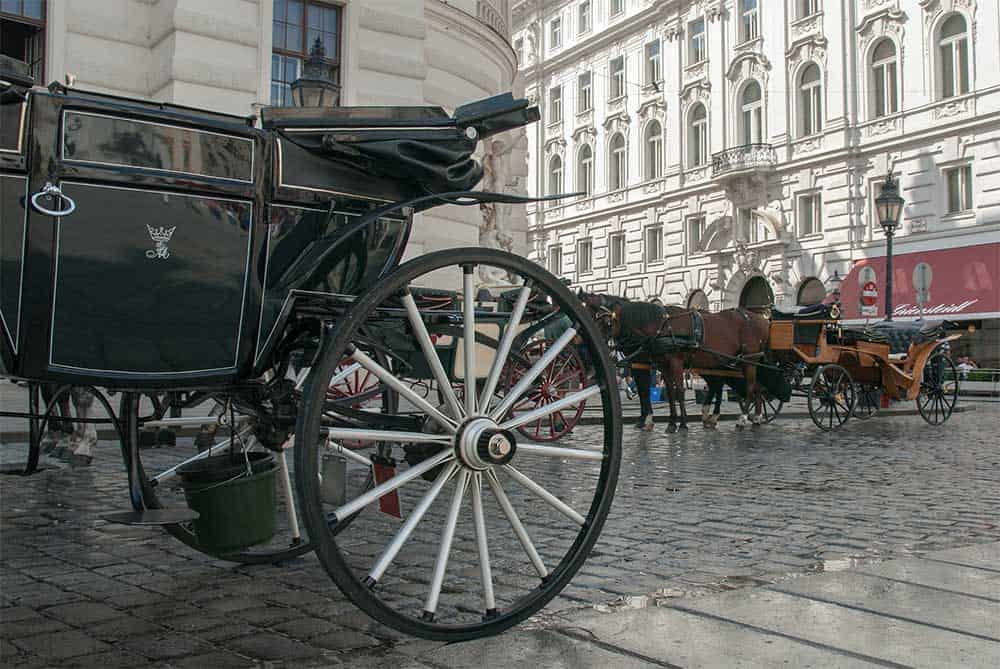 Before 1850, this central area was the entire city 0f Vienna. It featured large walls that secured the outer perimeter. The walls eventually came down and were replaced with the Ringstrasse.

You can take a trip around the Ringstrasse and see many of the most famous historic sites in Vienna without leaving the wide boulevard.

The Old Town area is a picture-perfect example of an old European city. It features cobblestone streets that separate brick buildings that house cafes, bars, and restaurants.

In the centre of the district, you’ll find Stephansplatz, the main public square of Vienna. It’s named after St. Stephen’s Cathedral, one of the most prominent landmarks in Vienna.

The large cathedral features a combination of Gothic and Romanesque design elements, creating an interesting façade that stands out, even in this old district.

If you happen to visit in winter, Innere Stadt is home to Vienna’s famous Christmas Markets.

As the centre of tourism, Old Town has some of the best hotels in Vienna. You also have a wide selection of hotels to choose from, including many four-star and five-star locations. No matter which place you choose, you’re never far from the main Vienna attractions.

✔ Best place to stay in Vienna for parks & the arts

Leopoldstadt is one half of an island near the centre of Vienna. It’s surrounded by the Danube on all sides, except the northern border with the neighbouring Brigittenau district. 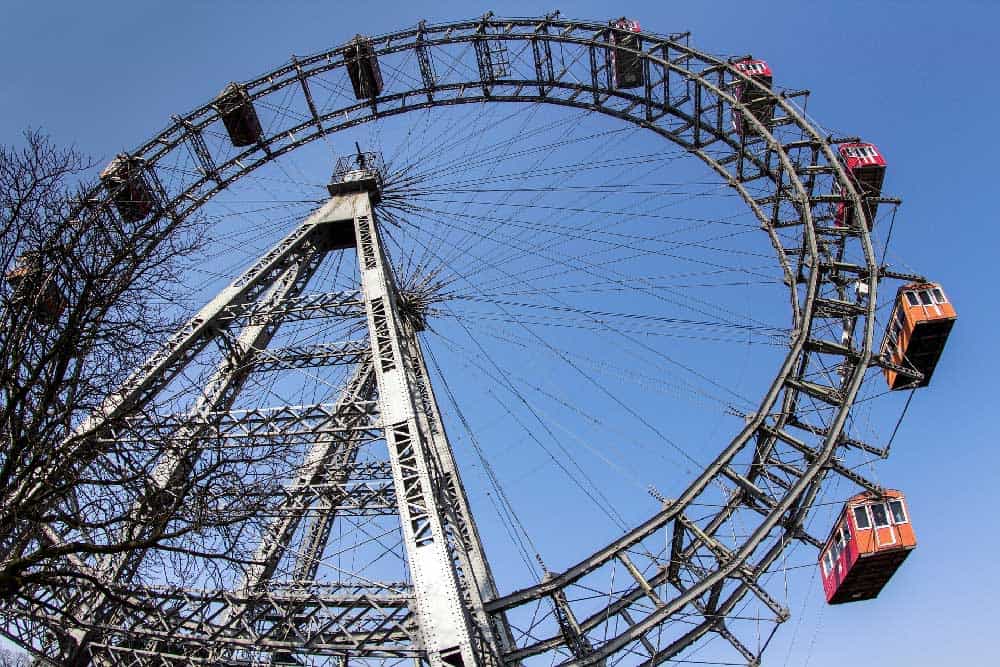 This area is mostly known for its large public parks, including the sprawling Prater Public Park. Prater covers close to 1,500 acres of land, offering lots of space to get away from the crowds and enjoy the fresh air.

The park also includes the famous Wiener Riesenrad giant Ferris Wheel. You can get a great view of parts of the city from the top.

As the district is surrounded by the Danube, you get some of the best views of the river in this district. The riverside areas are also lined with quaint little restaurants and cafes. You can even find a stretch of beach on the Danube canal.

Besides fresh air and great scenery, this district also offers access to the arts. Leopoldstadt includes several notable museums, including the Leopoldstadt Museum and the Prater Museum.

Leopoldstadt is considered a major theatre district. While dozens of cinemas in the area have closed in the past several decades, the district hosts several outdoor summer cinema festivals each year.

Leopoldstadt sits directly across the Danube from Old Town and most of the hotels are just a few blocks away from the river. With any of these options, you can easily travel between the two districts.

✔ Best neighbourhood to stay in Vienna for shopping & history

Landstrasse includes many activities and sites to fill your Vienna itinerary, including the popular 18th-century Belvedere castle. 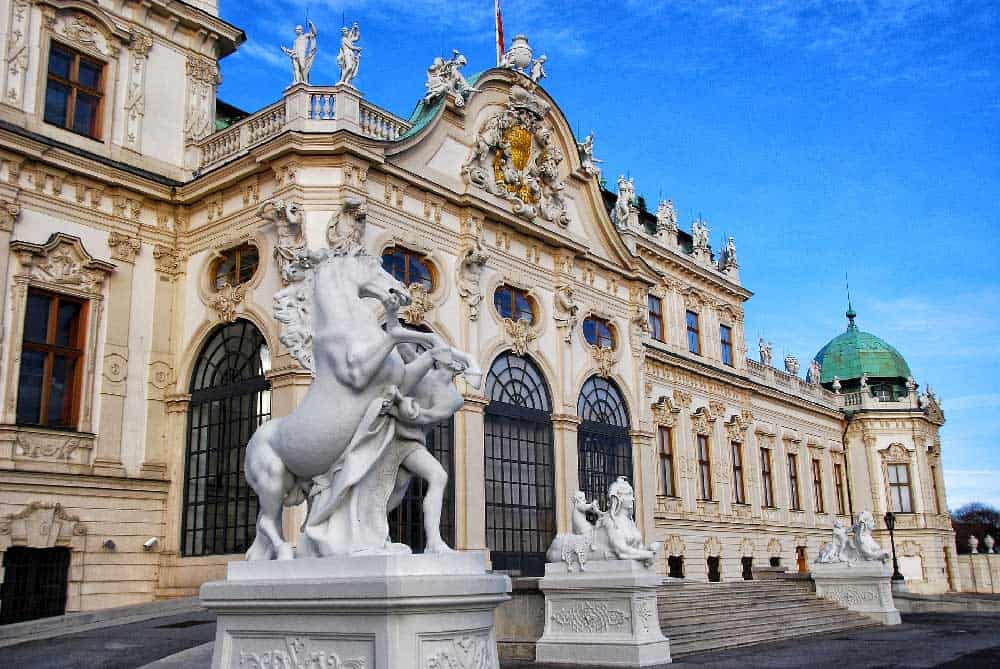 Another destination you need to visit in Landstrasse is the Hundertwasserhaus. The expressionist landmark is an apartment building featuring forested roofs and other plant life growing out of the façade.

Shopping and history are the highlights of this district, but it also has a museum. The Museum of Art Fakes includes a collection of forged artworks from famous forgers. Each exhibit includes detailed notes about the forgeries and the dramatic stories behind them.

Landstrasse offers a great selection of stylish four-star hotels and luxury accommodations. Many of these hotels feature spacious rooms, balconies, and a lot of natural lighting. You’ll also find a couple of options bordering Old Town.

✔ Best district to stay in Vienna for pubs & shopping

Neubau is known as one of the youngest, most liberal districts, due to its large student population. Also known as 7th District, Neubau also a popular destination for families and nightlife.

Landstrasse is not the only shopping district in Vienna. Neubau also offers a wide selection of stores. During the day, you may enjoy taking a trip to the ZOOM Children’s Museum and other family-friendly destinations. At night, you can explore the vibrant nightlife and the dozens of pubs in the area.

Neubau is a central district with its own selection of museums and historic sites. Some of the most visited sites include the Volkstheater and the Museumsquartier. 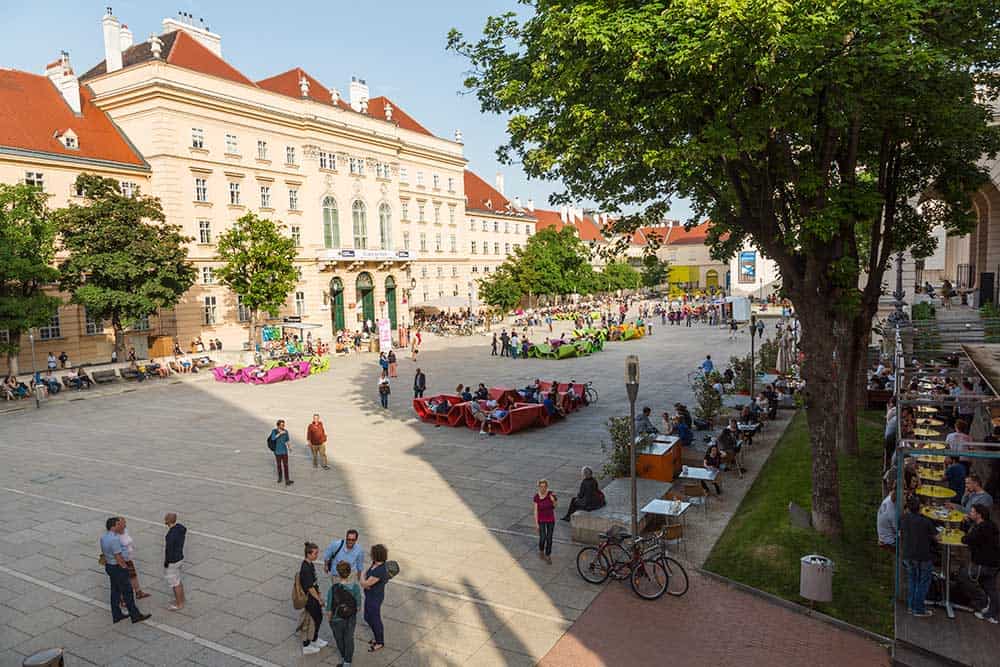 Volkstheater (People’s Theater) was founded in 1889 and still holds public performances. You can often find plays, operas, and musicals throughout the year.

Museumsquartier includes several Baroque buildings and houses modern art. It also has an artist-in-residence program, providing living and working space for over 735 artists.

As with the previous two districts, Neubau is still within walking distance of the city centre. Stretch your legs and walk for about 20 minutes to reach Old Town.

Neubau has become a top choice for those seeking lower rates on accommodations and dining. Neubau has more street vendors and dive bars compared to the other districts, along with several three-star hotels.