Whether you’ve just started your search for where to stay in Singapore (and if you’re one of the three humans on earth who hasn’t seen Crazy Rich Asians), you’ll already know that the best luxury hotels in Singapore are among the best in the world to indulge.

Whether you want to experience the iconic skyline views from Marina Bay Sands or colonial-era hospitality at Raffles Hotel, get your Singapore luxury accommodations search started with these unmissable top 5-star hotels in Singapore…

It’s impossible to talk about Singapore luxury hotels without Marina Bay Sands immediately entering the conversation. This brilliant 5-star, opened in 2010, is the largest hotel in Singapore with over 2,500 rooms spread over a trifecta of 55-floor towers. 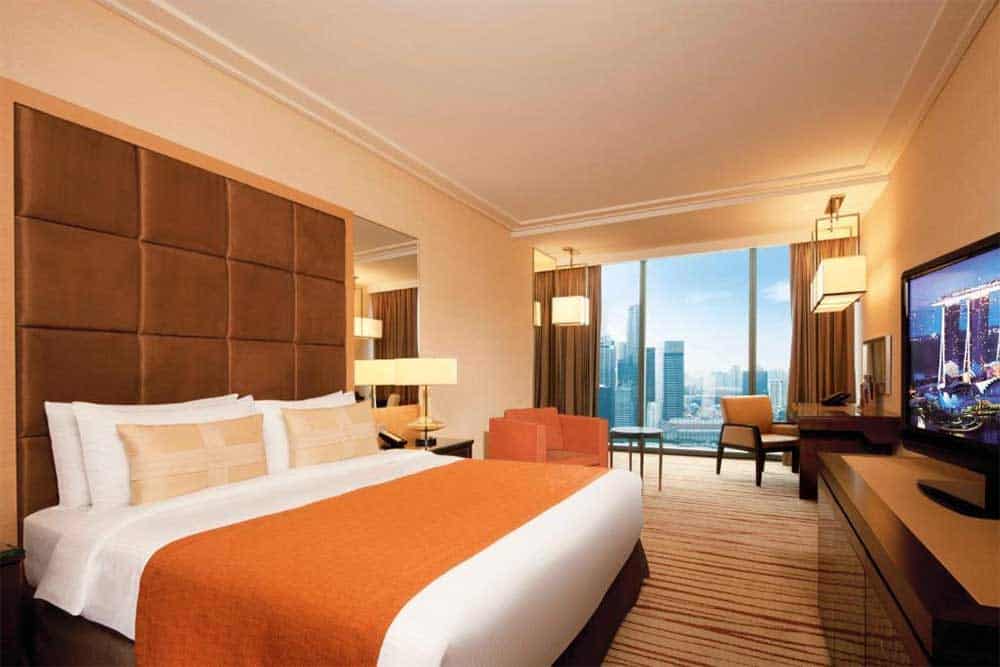 With all of those guests, you’d be correct to assume that Marina Bay Sands is chock-loaded with amenities. The star of the show is the 150-metre-long rooftop infinity pool, the highest of its kind in the world, delivering electric views over top of Singapore including the magnificent Gardens by the Bay. Also on the boat-shaped 57th-floor rooftop is the Sands SkyPark Observation Deck, accessible to guests and to the public for a small fee.

The barrage of eating & drinking options at Marina Bay Sands (and the connected Shoppes at Marina Bay Sands) leave guests with a staggering array of choices. Celebrity chefs are well-featured here including restaurant selections from the likes of Gordon Ramsay and Wolfgang Puck. Washing down your evening meal with a nightcap at Ce La Vie, the hotel’s famous rooftop club, is equally popular among guests and well-to-do locals.

Located on the CBD side of Marina Bay, The Fullerton Bay Hotel charms guests as one of Singapore’s finest luxury hotels in one of the city’s most coveted locations. Built over the historic Clifford Pier, this six-storey hotel fuses heritage with modernity. Its elegance is immediately palpable from the grand arches & towering chandeliers in the dining area to the rosewood-infused guest rooms.

With only 100 rooms over six storeys, it’s one of the smaller 5-star hotels in Singapore. Don’t let it fool you though: The Fullerton Bay Hotel offers  plenty for guests. 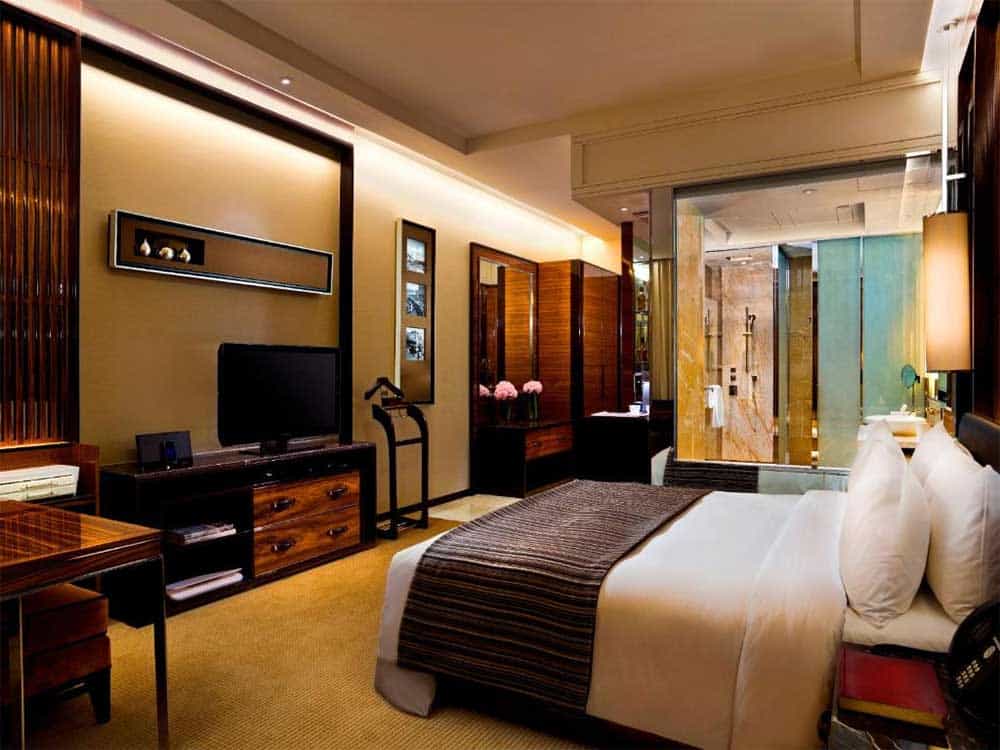 On-site eating & drinking options here include the traditional French cuisine of La Brasserie and the after-hours cocktails at the rooftop Lantern Bar. The views from the rooftop bar and the adjacent outdoor pool are worth the stay alone!

For exploring some of Singapore’s highlights, the historic Singapore River district (including the famous nightlife haunt of Clarke Quay), the Merlion statue, and the famous Gardens by the Bay are all a short walk away.

Long before Singapore’s modern luxury hotel scene exploded, Raffles Hotel has been atop more traveller wishlists than we could count. And it’s hardly a surprise: This top-notch 5-star hotel has been welcoming guests for 130 years including a formidable roster of celebrities and dignitaries. 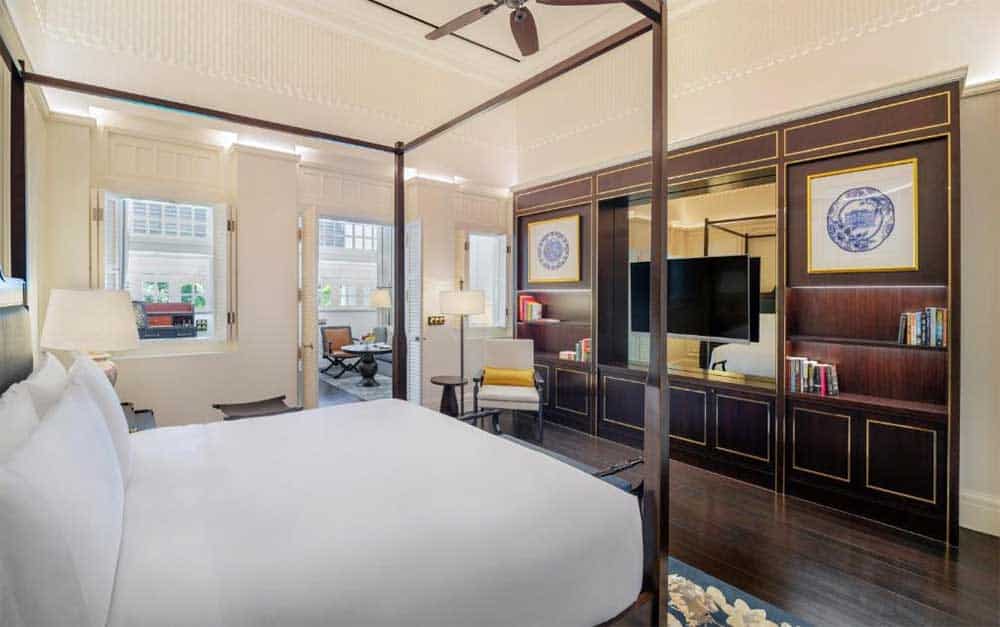 At first glance, the grandeur of Raffles Hotel is evident. The historical building charms with an elegant façade that fully captures a long bygone era in Singapore’s history. The sophistication continues to the interior as vaulted ceilings and towering columns greet guests.

Besides the hotel’s legendary hospitality and graceful rooms, Raffles Hotel is perhaps most famous for inventing the city’s signature drink, the Singapore Sling. Even if you choose to stay elsewhere, you can pop into the hotel’s popular Long Bar for a sip of the original drink that took the world by storm.

Located on the northern shores of Marina Bay, the Mandarin Oriental Singapore is one of the top luxury hotel choices in Singapore for business travellers. Not only is this 5-star hotel a short drive to Singapore’s central business district, it also hosts a wide array of amenities for professionals including a business centre and several full-service meeting rooms. 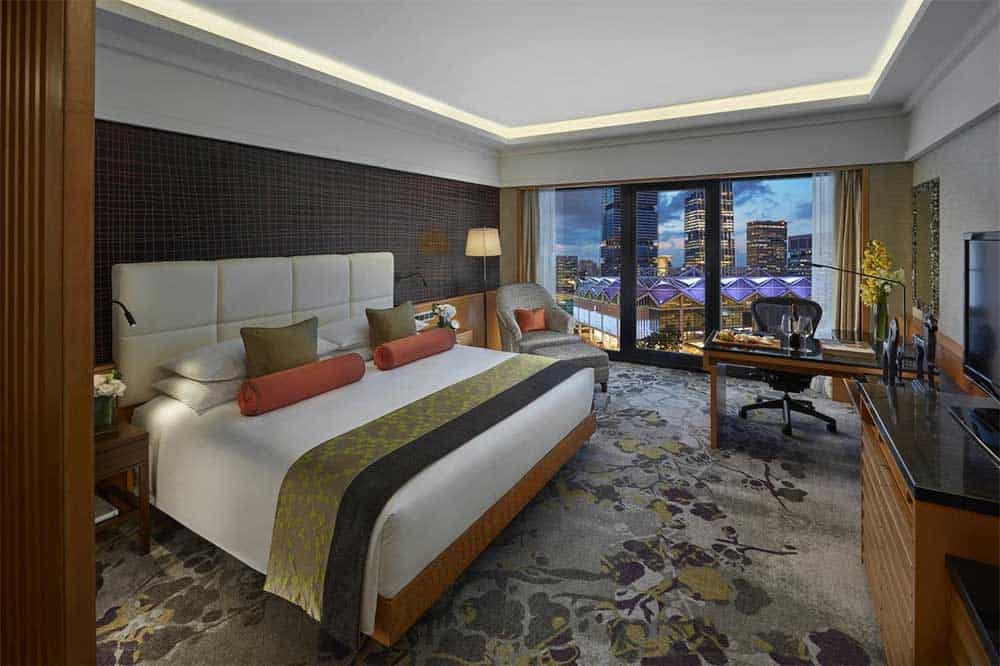 Much like its sister properties elsewhere in Asia, the Mandarin Oriental Singapore charms guests with spacious rooms decorated with a distinctive Asian flair. Floor-to-ceiling windows shine in some of the city’s finest views over the glitzy Marina Bay district and CBD.

As much as you’ll love relaxing in your room, the real treat of staying at the Mandarin Oriental is the outdoor pool. Curl up in a private poolside cabana and chill out to some superb city views before retiring to one of the seven on-site dining options including popular Dolce Vita, serving some of Singapore’s yummiest Italian cuisine.

While many of the top luxury hotels in Singapore reside in the Marina Bay, Shangri-La Hotel Singapore bucks the trend with its blissful property in the glamorous Orchard neighbourhood. For luxury shoppers, this is one of the top places to stay in Singapore as the city’s finest shopping malls and fashion boutiques lie within a stone’s throw from the hotel. 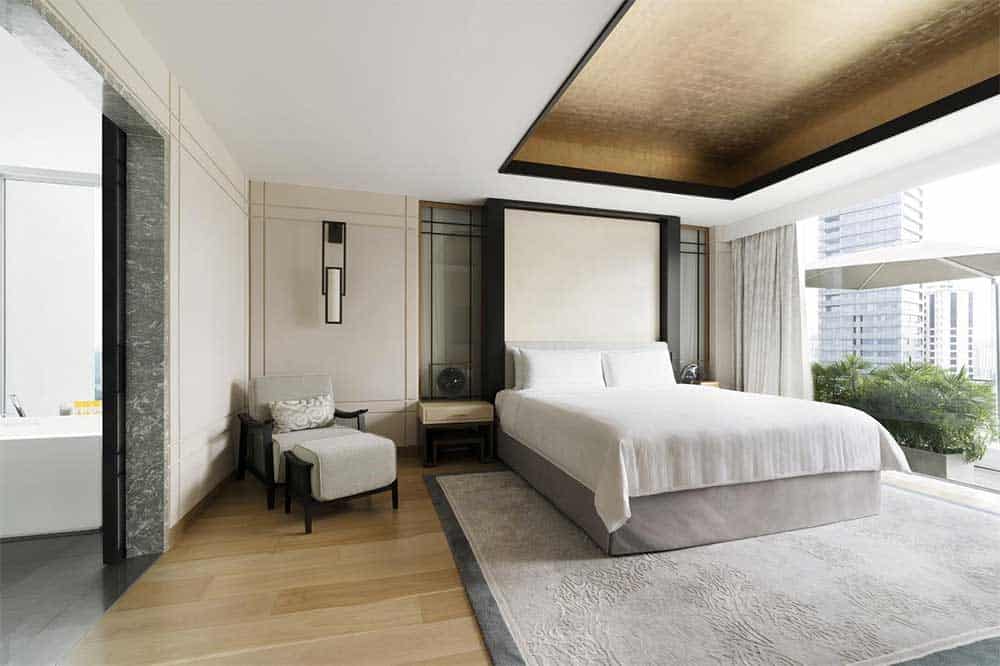 The Shangri-La Hotel Singapore sits upon 15 acres of tropical gardens, offering more an urban resort feel than a run-of-the-mill hotel. Along with the expansive outdoor oasis including a relaxing pool area and open-air greenhouse, the hotel features a handful of fantastic amenities including a 24-hour fitness centre and a spa.

Thanks to the hotel’s family floor and kid-friendly play centre, the Shangri-La Hotel is also one of the best luxury hotels in Singapore for families. Foodies will also be well-served here with several on-site dining options including the Michelin-starred Cantonese fare of Shang Palace.

Not to be confused with its sister property a few steps away, The Fullerton Hotel is the older, and more well-known, of the two siblings. Situated in an almost century-old post office, The Fullerton charms guests instantly with its graceful façade and interior. 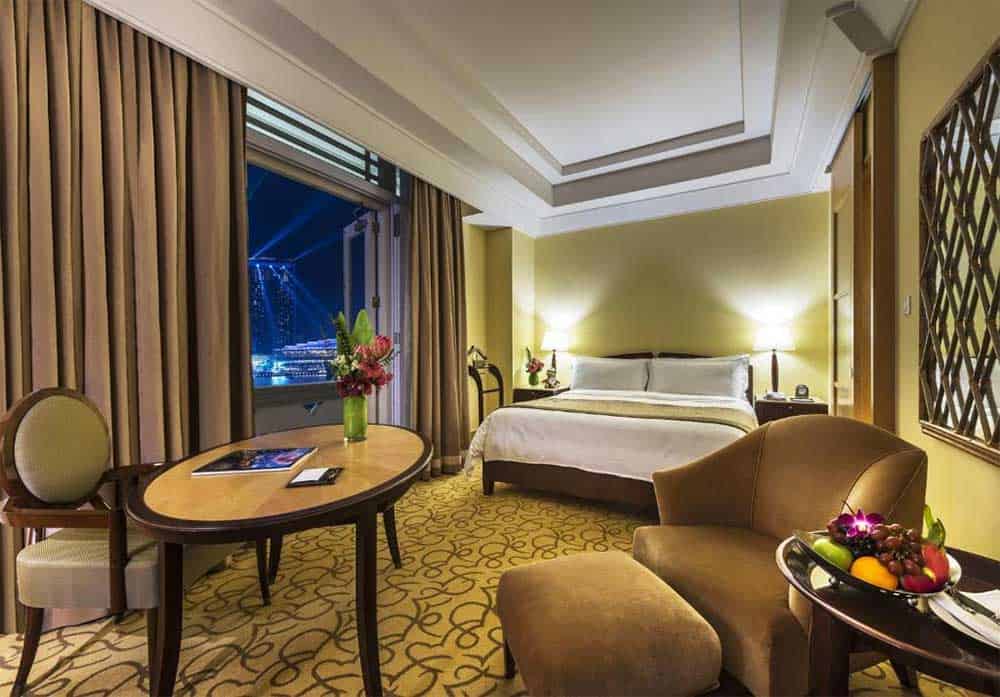 As you’d expect from one of the top-rated luxury hotels in Singapore, The Fullerton Hotel awards its patrons with dramatic views over the city and the Marina Bay area from its rooms, the mezzanine-level infinity pool, and the rooftop Italian restaurant & bar, The Lighthouse.

The hotel’s location at the mouth of the Singapore River is one of the best among the city’s top luxury accommodations. Within a quick walk, you can experience the delicious riverside restaurants of Boat Quay, the nightlife of Clarke Quay, or the delights of Marina Bay.

Opt for one of the newly-renovated rooms (if possible) to get the most out of your stay.