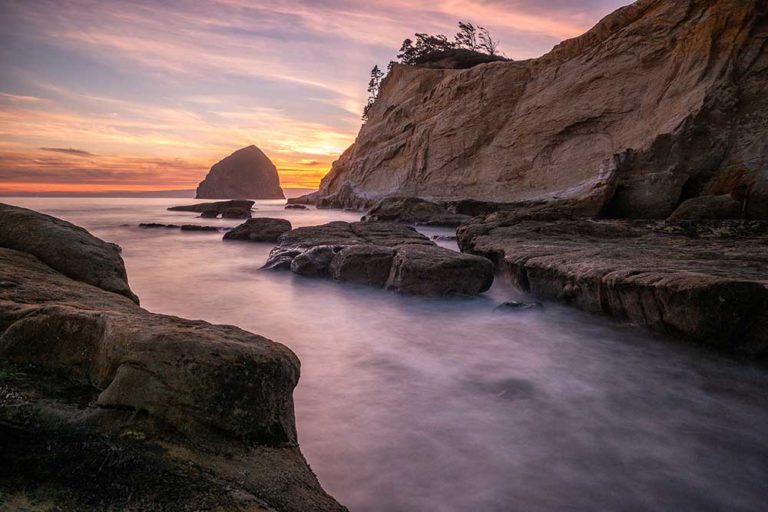 Planning a trip through the Pacific Northwest? It’s hard to go wrong with Oregon. With its rugged coastlines and forested mountains, Oregon is one of the most beautiful outdoor destinations in the USA. Add to that its penchant for riding shotgun on American cultural trends, Oregon is a winner.

Urban explorers will love roaming the streets of Portland or Bend in search of food trucks and craft breweries. For outdoor adventurers, prowling along the Oregon Coast or Columbia River Gorge is equally thrilling.

Ready to plan the ultimate Oregon getaway? Sort out your ultimate trip with this quick & easy Oregon travel guide.

Where to go in Oregon

Need a starting point for your Oregon travel plans? Look no further than laid-back Portland. Drooping from the border with Washington State, Oregon’s biggest city is the perfect introduction to the Beaver State. 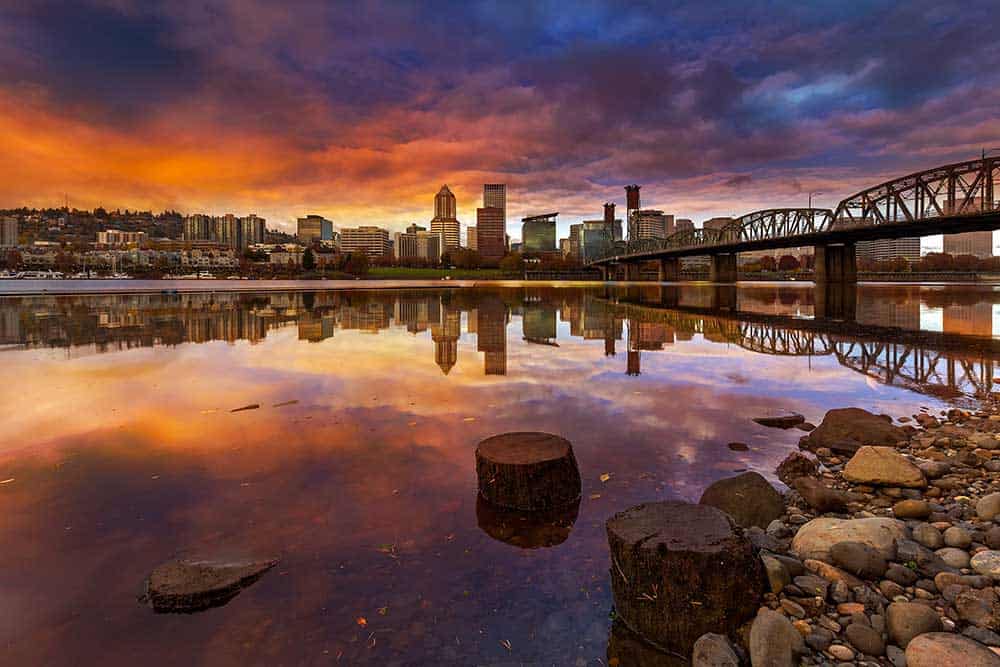 In Portland, Pacific Northwest’s history and modern American culture collide. Slink through Portland’s historic Old Town/Chinatown or Pearl District to get a taste of the city’s frontier town routes. To see its modern side, wander around the city to unearth trendy restaurants, coffee shops, food trucks, and craft breweries.

Even with all its urban perks, one of the best reasons to visit Portland is to get in touch with nature. The leafy city is jam-packed with forested parks, crisscrossed by gardens and nature trails. Spend time meandering in Washington Park or Forest Park. The pair are two of the finest urban parks in the entire country.

Ready to plan your trip to Portland? Get started with these travel resources:

Craving the charms of the Oregon Coast? Spend time hanging out in Cannon Beach. Perched on the Pacific Coast in northwest Oregon, Cannon Beach is one of the most popular places to visit in Oregon. The small coastal city hits its peak in summer as city-dwellers whisk over to bask in its seaside pleasure. 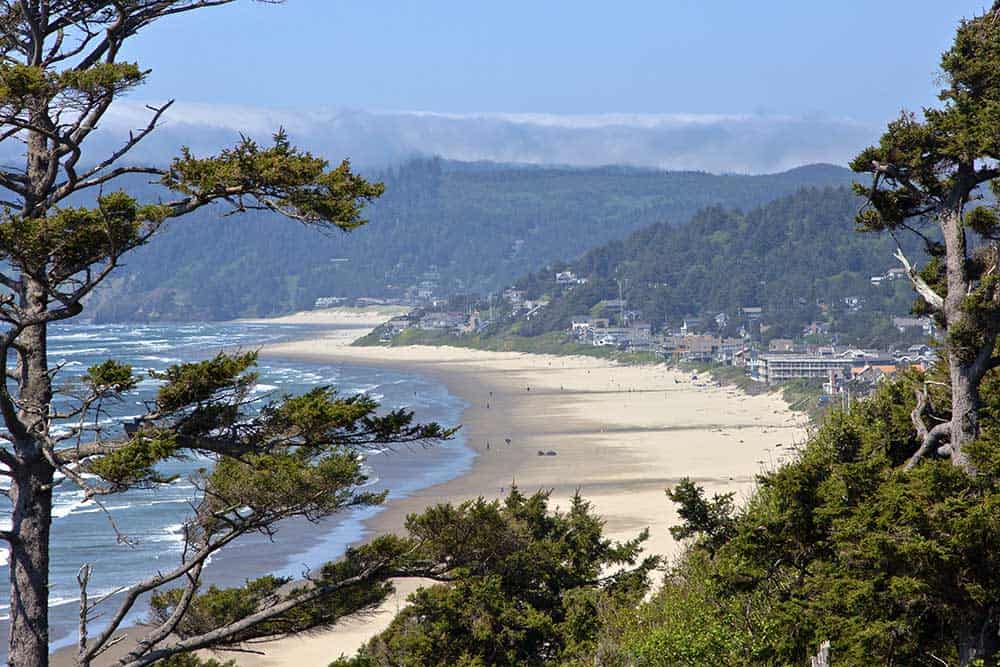 While most visit Cannon Beach as a day trip from Portland, it’s worth slowing down and spending a day or two here. Besides the main beach (and its famous Haystack Rock), Cannon Beach offers plenty of hiking opportunities. On its trails, you’ll walk between sandy beaches, uncovering tide pools and rock formations.

Urban travelers aren’t left out either. The small town is loaded with amenities. In true Oregon fashion, you’ll find several art galleries and craft brewpubs dotting the center of town.

Oregon’s famed natural beauty comes to an apex at Crater Lake National Park. The state’s only national park centers around stunning Crater Lake. At 1943 feet deep, the dark-blue caldera lake is the deepest in the United States.

Crater Lake National Park is open year-round. There’s good reason to visit the park in any season. While most travelers prefer visiting in summer, those who brave the cold will be rewarded with a unique scene.

Although the area is among the snowiest in the US, the lake itself rarely freezes over. The scene of the snow-kissed peaks reflecting into the water is divine.

For nature lovers, no urban destination in Oregon charms like Bend. Built on a curve in the Deschutes River, the small city of Bend is famed for its year-round outdoor adventure. Whether you’re hitting the slopes or the trails, Bend has something brewin’ in every season.

To the west of Bend lies the beautiful Cascades Mountains. The massive mountain range stretches from British Columbia to California. Not far from Bend hides some of the range’s most popular ski resorts and hiking trails. 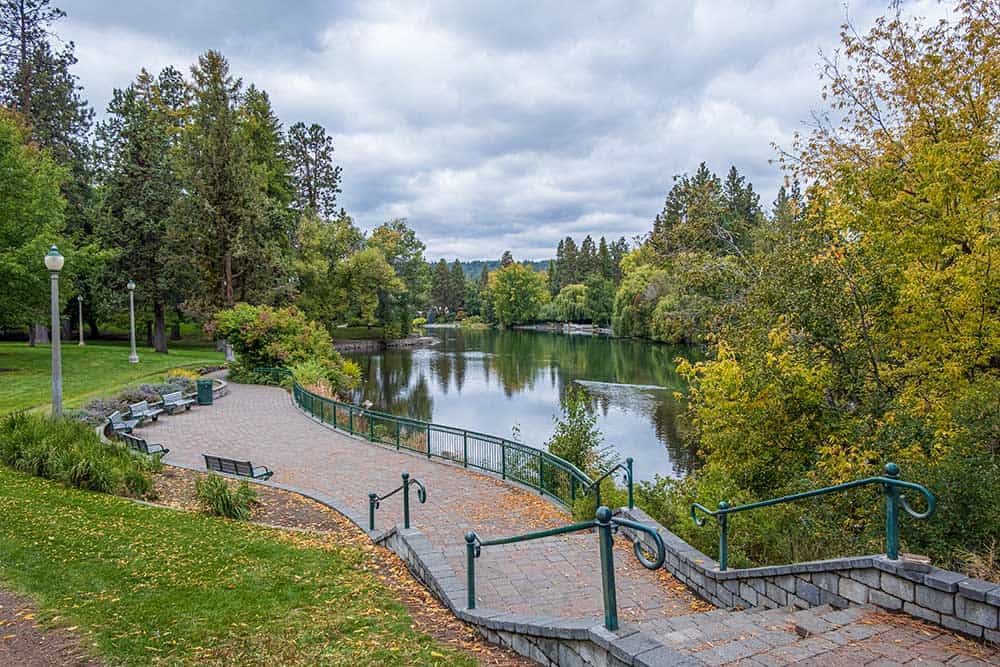 Unlike much of Oregon, Bend is known for its sunny weather. The city gets almost 300 days of sunshine, no small feat for a state famed for its rainfall.

Done with all the skiing, mountain biking, hiking, and kayaking? Explore Bend’s burgeoning food & drink scene. Much like Portland, Bend cranks out food trucks and craft breweries like they’re goin’ out of style. Settle down at one (or several) to get a taste of one of the state’s coolest culinary scenes.

Like Bend, the riverside city of Hood River is a paradise for outdoor enthusiasts. With its location on the mighty Columbia River, Hood River is holy ground for kitesurfers and windsurfers. The windy conditions and strong currents are the perfect storm for adrenaline-surging watersports. 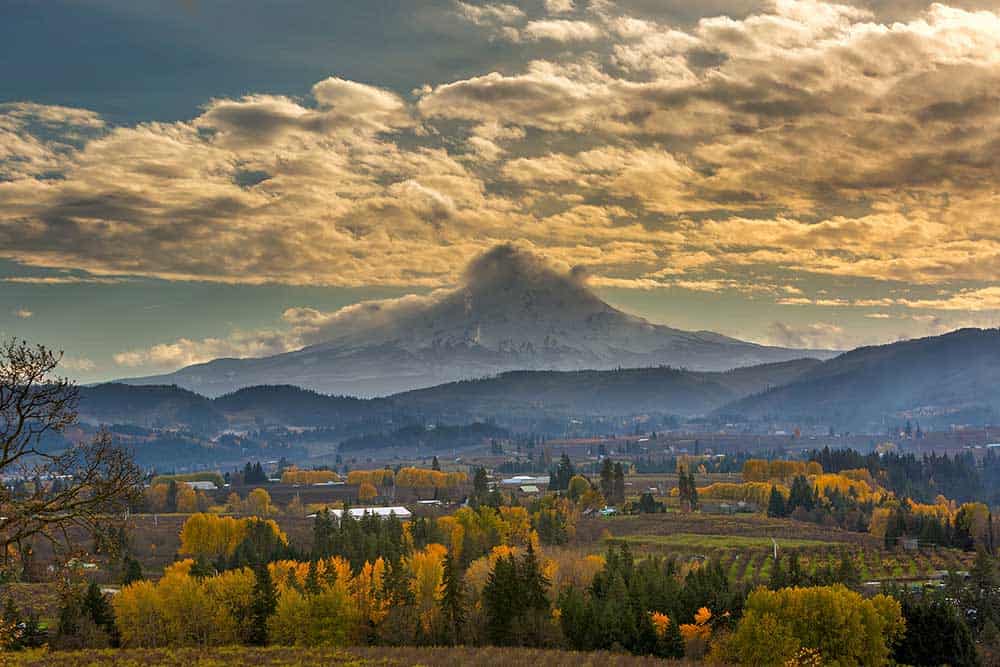 Don’t want to get your pulse up? Roll along the Hood River Fruit Loop Trail instead. The 35-mile round-trip route wheels past 26 local wineries, cideries, and farms. Enjoy a day of sampling wines, ciders, and fruits with Mount Hood as your backdrop.

Even if you don’t stay in Hood River, carve out time to explore the Columbia River Gorge National Scenic Area. Located within reach of Portland, the area makes for a perfect day (or two) out of the city. 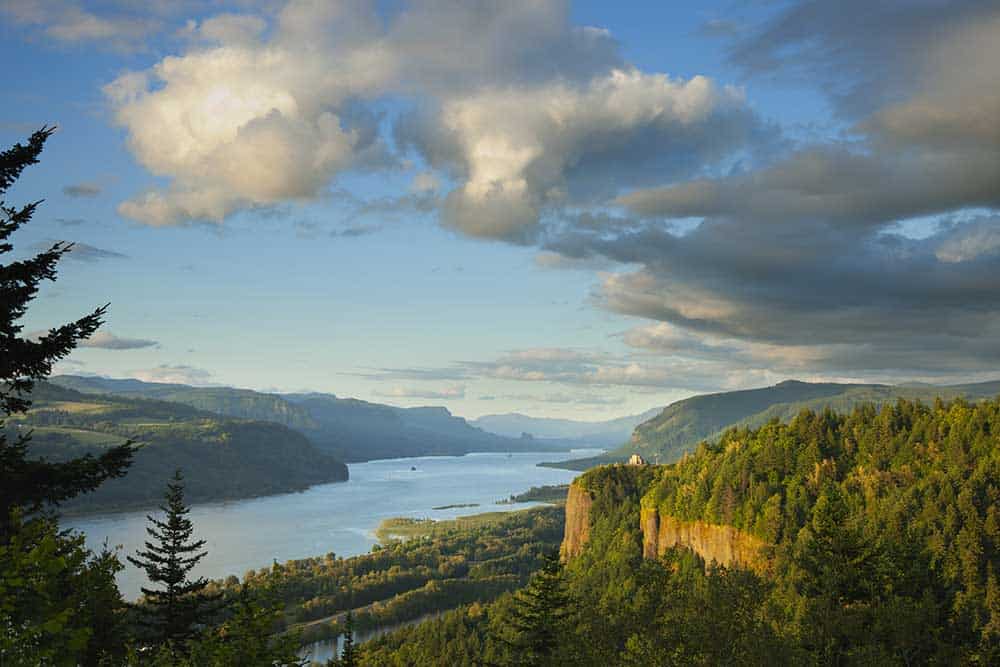 Many of the area’s best sights lie along the Historic Columbia River Highway. The 75-mile route rides along the Columbia River east to west between Troutdale and The Dalles. There are several hiking trails and viewpoints to stop for a rest along the way.

While not as famous as Napa Valley in California, Willamette Valley is still well-known among discerning wine drinkers. Dubbed Oregon Wine Country, the Willamette Valley stretches southward from Portland to Eugene. It’s one of the top wine-producing regions in the United States. 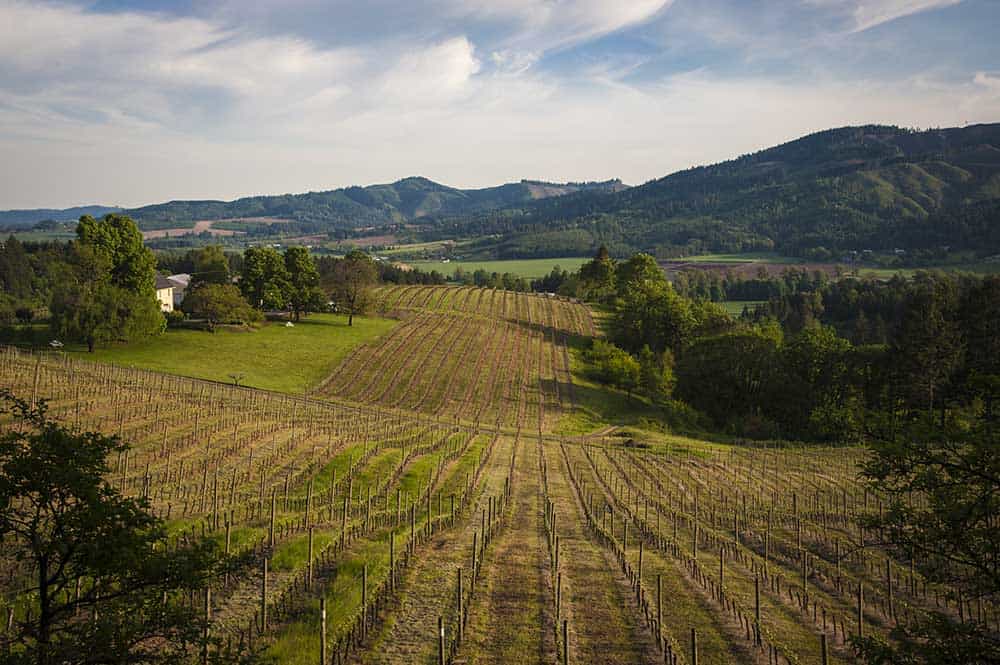 Over 500 wineries dot the landscape in Willamette Valley. The area is famed for its Pinot Noir, considered some of the world’s finest.

If you’re tight on time, visit the Stoller Family Estate. Not far from Portland, the winery is perched on over 400 acres on the Dundee Hills. Its tasting room, combining its exquisite wines with farm-to-table cuisine, is one of the best in the USA.

Other travel destinations in Oregon

When to visit Oregon

The best time to visit Oregon is from June to August. Although summer is the definitive tourism high season in Oregon, the weather is too good to pass up. Summer is the driest time of the year in Oregon. Book your accommodations and car rentals well ahead to avoid disappointment. 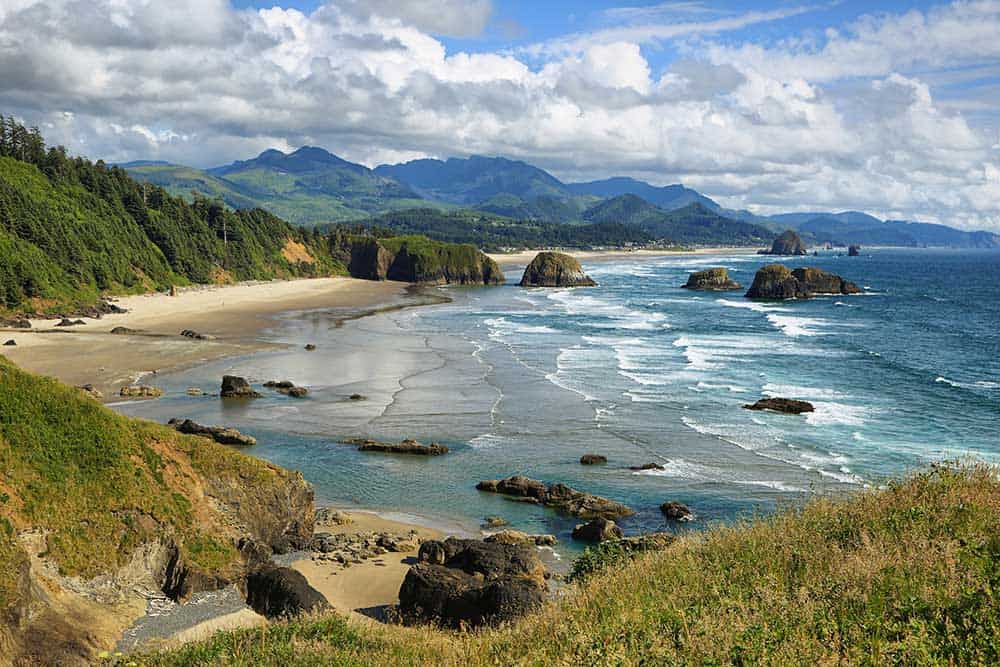 If budget is a concern, October to May offers the best accommodation deals. It is, however, the worst time of the year for weather. Like much of the Pacific Northwest, winter is the coolest and rainiest season in Oregon.

Keep in mind: Oregon is famous for its wet climate. Even if you’re visiting in summer, rain showers are not uncommon. Bring along good rain gear all year-round. (But especially in the late fall to spring wet season.)

How to get to Oregon

Oregon is well-connected by road to the neighboring states of Washington, Idaho, and California. Popular routes and sample driving times to/from Portland include: