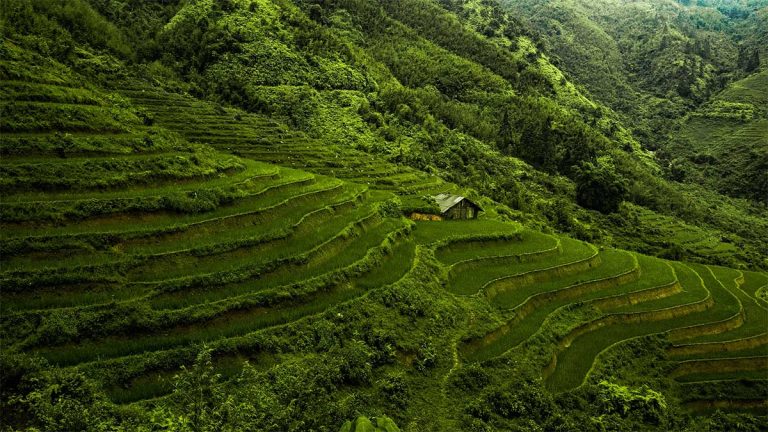 Whether you decide to love it or hate it, Vietnam belongs on nearly every traveller’s Southeast Asia bucket list. Travel in Vietnam is, no doubt, a tad more frustrating than elsewhere the region thanks, in part, to the nation’s unique geography and to the hassles & scams that have sullied the experience for many-a traveller.

In spite of its ability to polarize, however, there’s no denying that Vietnam is nothing short of an interesting place to visit. It’s attuned to all the things that make Southeast Asia a favourite region for travellers.

Chow down on its mouth-watering food, escape to its white-sand beaches or marvel at its landscapes and you’ll see why all of its difficulties could slip away in an instant.

Not sure how to start planning your visit? Figure out exactly when to visit & where to go with this Vietnam travel guide…

Looking to explore other countries in the region? Check out our Southeast Asia Travel Guide for more destination ideas & tips!

When to visit Vietnam

Like much of Southeast Asia, choosing when to go to Vietnam is one of the toughest parts about planning a trip here. Despite the region’s reputation as a warm escape, there are certain times of the year when it’s simply unpleasant (if not downright impossible) to enjoy a trip in all parts of the country.

Overall, the best time to visit Vietnam is in spring from February until April and in autumn from August until October. During these seasons, temperatures in Vietnam are more moderate as is rainfall throughout much of the country. 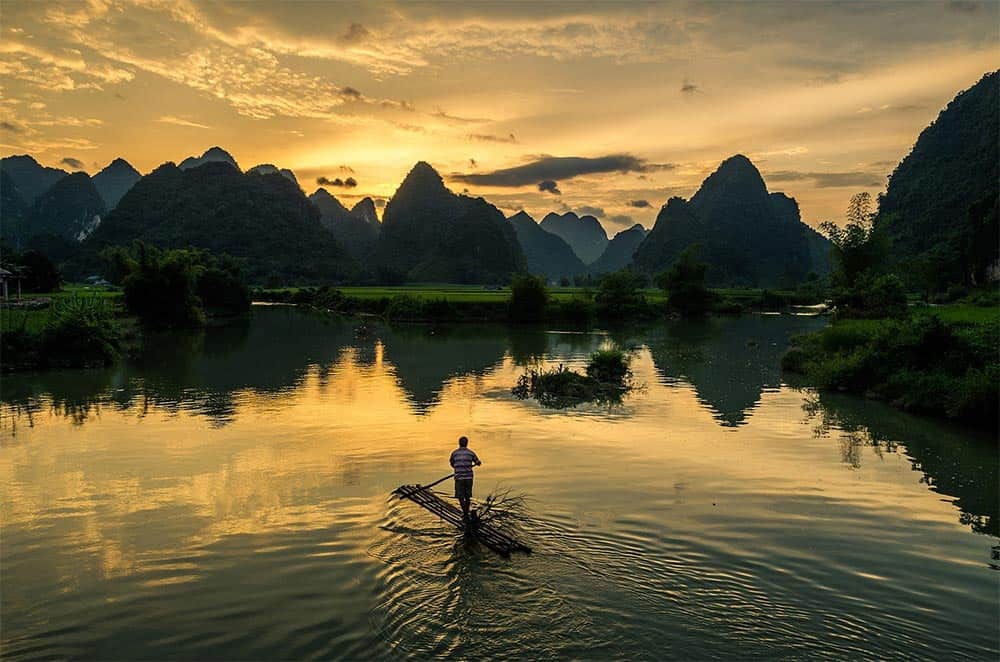 Of course, that’s just the easy answer. In reality, things are a little more complicated.

The country’s long north-south stretch over tropical coastline means that there’s a large fluctuation between destinations. When one part of the country is experiencing relatively dry conditions, another could be drowning in excessive rainfall.

Despite this many would claim that Vietnam is year-round destination. For the most part, this holds true with the exception of the central coast including Hoi An and Hue, which experience heavy rains often accompanied by flooding between October and November.

Looking for ideas on when to go in Vietnam and what to bring along? Check out these travel resources:

Where to go in Vietnam: The top destinations & best places to visit

Like so many destinations in Southeast Asia, Vietnam offers a diverse array of landscapes and cities. The highlights are plenty and depend in large part on what your ideal travel itinerary looks like.

Most classic Vietnam itineraries balance Vietnamese urban life with a dash of nature. In our honest opinion, this approach is spot on. 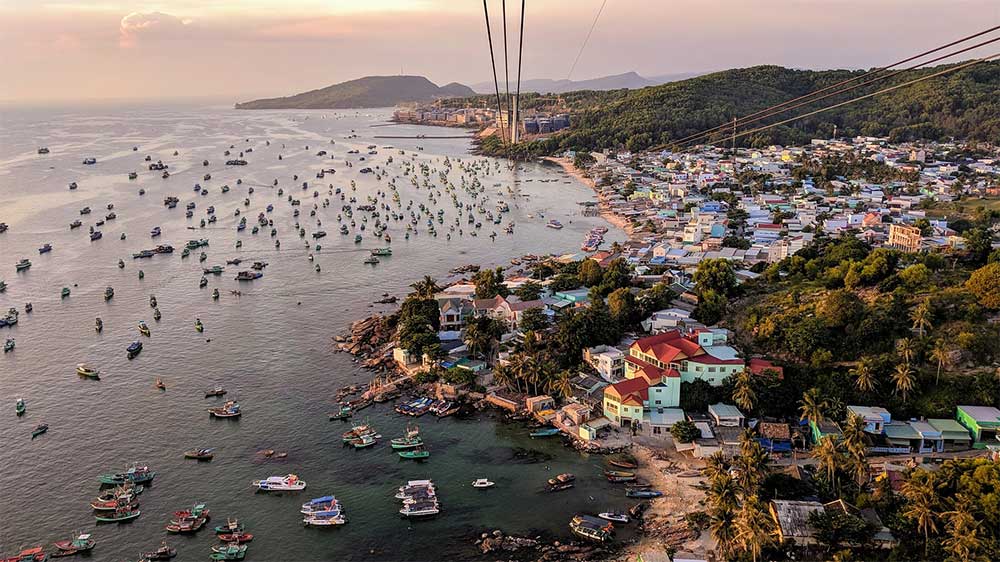 However you choose to plan your trip know this: visiting Vietnam takes time. If you’re on a time-crunch (which is our speciality around here), you might feel a bit rushed trying to fit in all the top sites.

Distances between many of the best places to visit in Vietnam can be long and the journeys arduous; you’ll rarely regret giving yourself a couple extra days than normal for a little more time to breathe between trips.

Looking for quick ideas on where to go in Vietnam? Check out these travel resources:

Most visits to Vietnam start with the fascinating capital of Hanoi. Not long ago, this ancient city sheltered itself from the modern world, recovering from a war that left much the nation in ruins and demoralized.

Little more than two decades ago, Hanoi opened itself up again, setting off an obsession among visitors that continues unabated to this day. 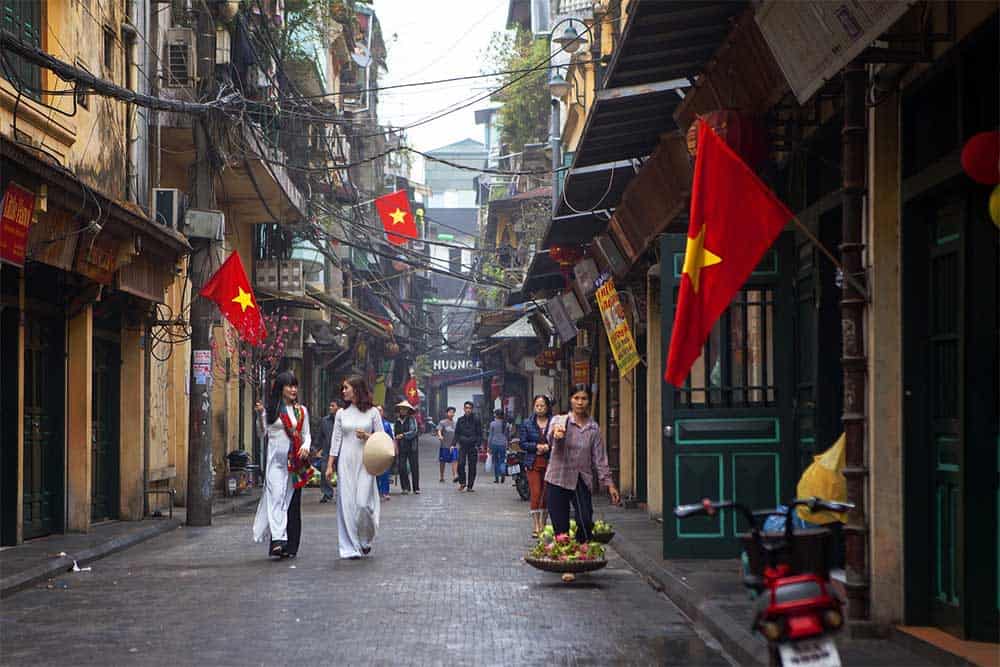 In Southeast Asia, there’s no city quite like Hanoi. Its colonial past left behind a palette of Chinese and French influences that blend seamlessly into Hanoi’s proudly Vietnamese flavour.

As much as the Hanoi’s cultural attractions and urban buzz will intrigue you, its food is what keeps many on the edge of their seats. Sampling local favourites like pho bo (beef noodle soup), summer rolls, or the French-inspired banh mi (Vietnamese baguette) between sips of beer for mere pocket change is among the truest simple pleasures of visiting the Vietnamese capital.

Planning a trip to Hanoi? Check out these travel resources…

What to eat in Vietnam

Even if the Vietnamese urban life and landscapes don’t get your motor running, the food in Vietnam might. Vietnamese cuisine is unlike any other in the region, drawing influences from French and Chinese cuisine.

Overall, Vietnamese food is lighter and healthier than many Asian cuisines, using plenty of fresh ingredients along with herbs & spices rather than relying on deep-fryers. Here’s a quick guide of what to eat in Vietnam: 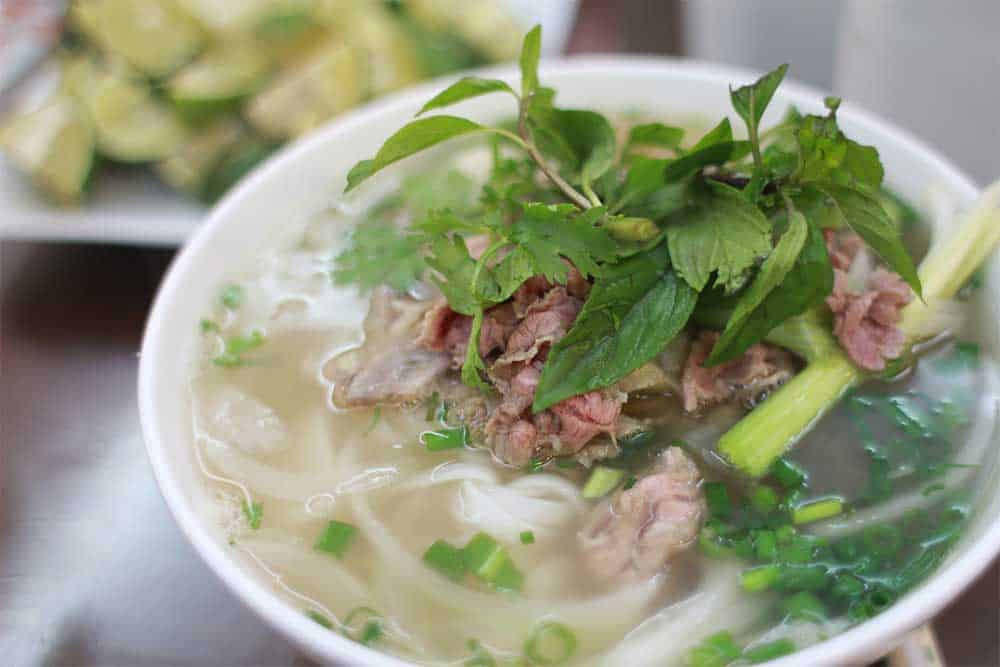 Some of the most popular airlines operating into and out of Vietnam include VietJet Air, Vietnam Airlines, JetStar Pacific, and AirAsia.

By land: Vietnam shares land borders with Cambodia, China, and Laos. The land borders tend to be far less convenient for entering Vietnam. At the borders, you’ll often experience long delays and be subject to “processing fees” that depend on the mood on the border guard.

By air: With the long distances between most of the top places to visit, air travel is the easiest way to get around Vietnam if you’re on a time crunch.

By bus: If you’re a fan of epic overland journeys than travelling around Vietnam by bus might just be for you! The bus system in Vietnam is extensive and cheap if a little slow.

Most foreigners prefer the more expensive but more convenient open-tour buses over local services. These open-ticket buses operate between all of the main tourist destinations in Vietnam including Ho Chi Minh City, Dalat, Nha Trang, Hue, Hoi An, and Hanoi.