Even with the world questioning why, I never hesitate to sing praises to Taiwan. This small island nation in East Asia packs a wallop, never minding the pull of tourism giants like Japan, China, and Hong Kong surrounding it in every direction.

The world’s slowly getting to know what Taiwan offers, and even if it doesn’t quite match up to the classic Asian beauty of its neighbours, it’s still equally as capable of painting a smile on anyone’s face as any place on the sub-continent.

What I’ve loved about Taiwan from the first moment was the country’s lack of pretension. You see it as much in the streets of Taipei as in small mountain towns. Taiwan doesn’t appear to strive to be anything more than itself; it’s a nation that clearly treasures its past as much as it peers ahead into its future.

From its night market cuisine and its classic (and not-so classic) architecture to its hot springs and lush mountain terrains, there’s a certain authenticity throughout the country that’s uniquely Taiwanese. And that alone should be enough to inspire a visit to Taiwan on your next trip to Asia.

When to visit Taiwan

At quick glance, it would seem that Taiwan is a year-round destination. After all, Taiwan’s not, like its more northernly neighbours of Korea or Japan, a place where you’ll find yourself buried in snow or shivering in the harsh winter cold for several months of the year.

That doesn’t mean you shouldn’t pay attention to when to visit. Throughout the year, weather in Taiwan can drastically from one day (or one hour!) to the next. And despite not having huge seasonal temperature swings, the conditions between seasons are anything but consistent. 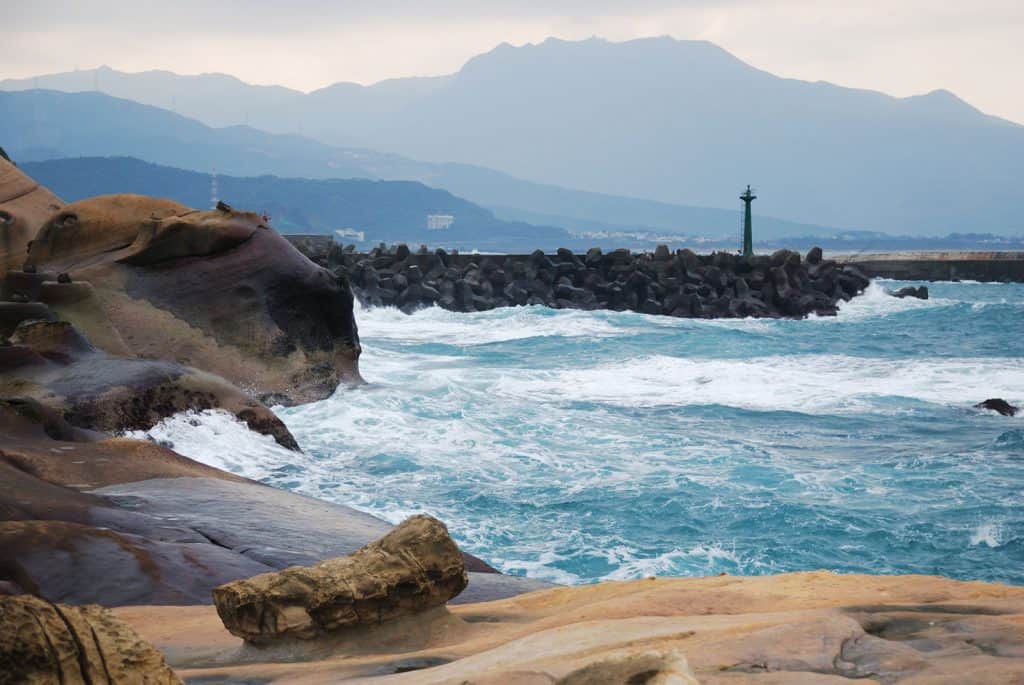 Although summer is a fairly popular time to visit Taiwan, keep in mind that the weather isn’t at its best. Summers in Taiwan are generally very hot and humid with frequent storm showers brewing in the afternoons. Between June and October is also high season for typhoons. (I promise that you will not want to get caught travelling in one!)

In general, the best time to visit Taiwan is in autumn. Temperatures are still warm throughout the island and rainfall is far lower than in the summer months. The lower tourist numbers in autumn also mean that hotel availability increases while prices drop. You’ll get much better value at this time of year.

Not sure when to go to Taiwan? Take a look at these resources:

Where to go in Taiwan

For an island of such small stature, Taiwan presents a wildly diverse palette of destinations for travellers. From outdoor hiking adventures to some of Asia’s most surprising urban experiences, you’ll be amazed with how easily you can put together an awesome Taiwan itinerary and get swooned by best places to visit in Taiwan.

There’s no better gateway to Taiwan than the eclectic capital of Taipei. While I doubt it’ll be love at first sight for you, the pulse of Taipei is so infectious that you’ll feel the city’s beat almost instantly despite its slightly scruffy outward appearance. 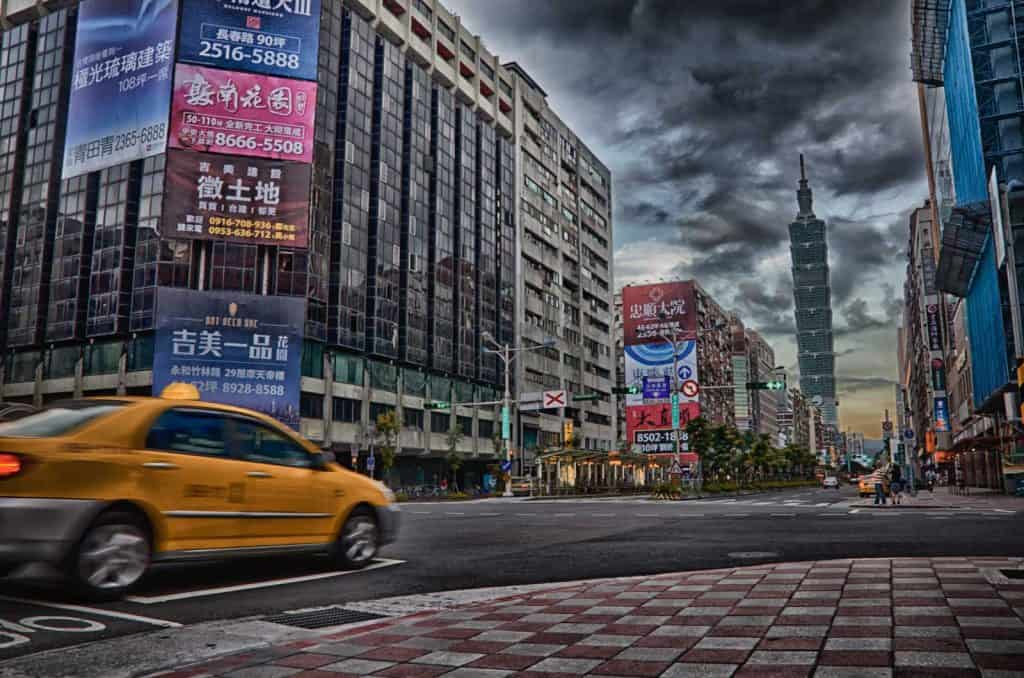 A traveller’s love for Taipei usually veers towards one thing: food. Taipei is truly one of the world’s greatest food cities, even if that reputation isn’t quite common knowledge yet. Set foot in a Taipei night market and you’ll catch the city at its best while giving yourself a little serotonin boost with all the palatable (and maybe unpalatable) goodies at your finger tips.

Not sure how to start planning your trip? Here are a few resources from our Taipei Travel Guide:

All too many travellers pass by Hualien. At first glance, there doesn’t seem like much too occupy yourself in this eastern Taiwan city. While more exciting cities await elsewhere on the island, Hualien charms less with what’s in it than what’s outside it.

Sure, there’s a handful of interesting things to do in Hualien itself from the usual Taiwanese suspects of night markets, temples, and even some beaches with impressive coastal scenery. But the real reason for visiting Hualien is as a base to explore some of Taiwan’s best natural attractions. 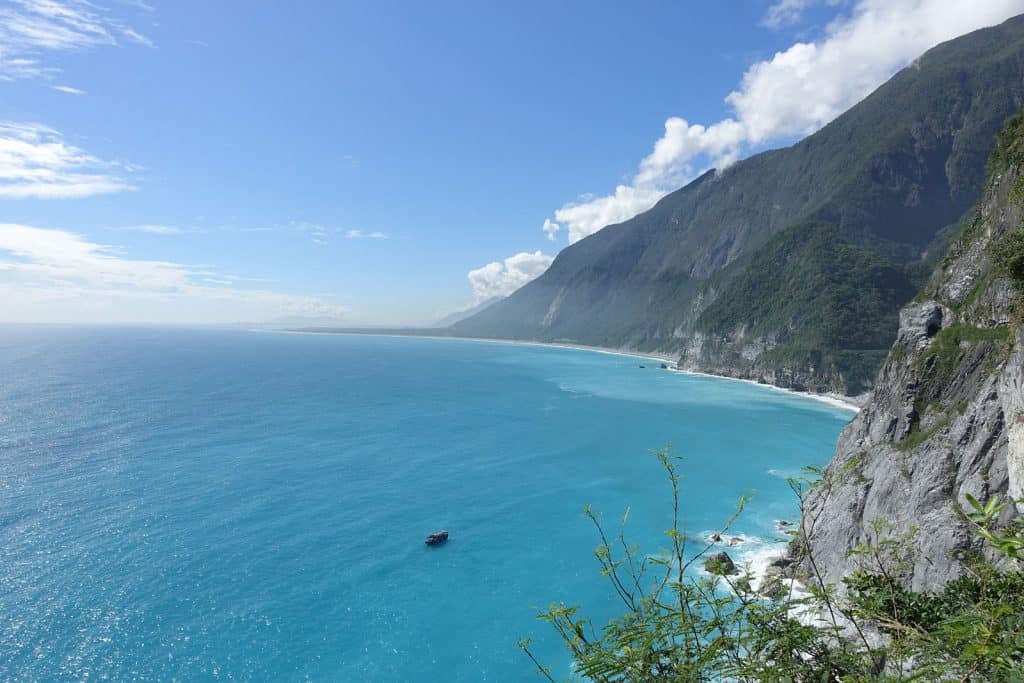 Just 15 kilometres outside of Hualien lies Taroko Gorge, a formidable park bedecked with towering cliffs, canyons and lush forests. Among the best places to visit in Taiwan, Taroko Gorge is best savoured visiting at a leisurely pace from Hualien rather than on a frenzied day trip from Taipei.

Whereas Taipei introduces you to the buzz of modern Taiwan, Tainan is perhaps the best city in the country to step backwards into Taiwanese history. The first capital of Taiwan and the country’s oldest established city, Tainan harkens back to the island’s colonial roots when the Chinese and Dutch first settled the island in the 16th and 17th centuries. 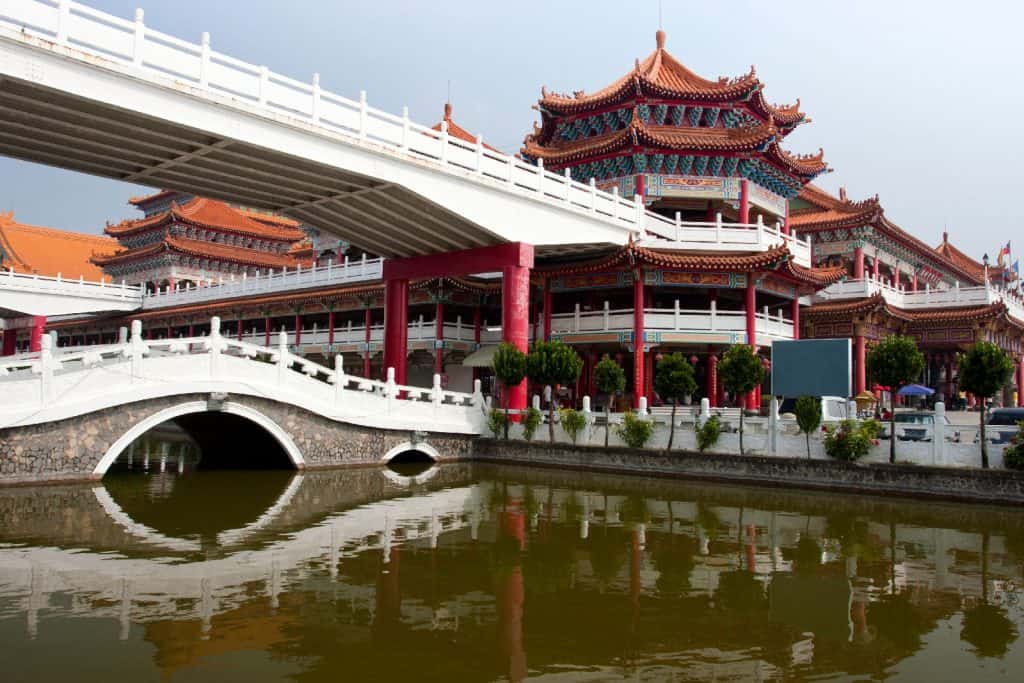 Despite Tainan’s modern façade, the city’s history is written on its sleeve. Don’t be surprised when it feels as if beautiful temples are sprouting from every street corner while old colonial forts keep watch at a distance.

Although there’s plenty more to do in Taipei, the pleasures in Tainan are perhaps more classically fulfilling for travellers. Wandering through the mix of old and new in Tainan is absolutely fascinating, and, to some, is the best Taiwanese urban experience on the island.

If you’ve already spent time elsewhere in Taiwan, Taichung hardly feels like a must-see destination. Roaming the streets of Taichung is much like any other run-of-the-mill Taiwanese city. But like so many other places in Taiwan, its utility is less as a destination in its own right than as a springboard for more interesting forays into the surrounding area. 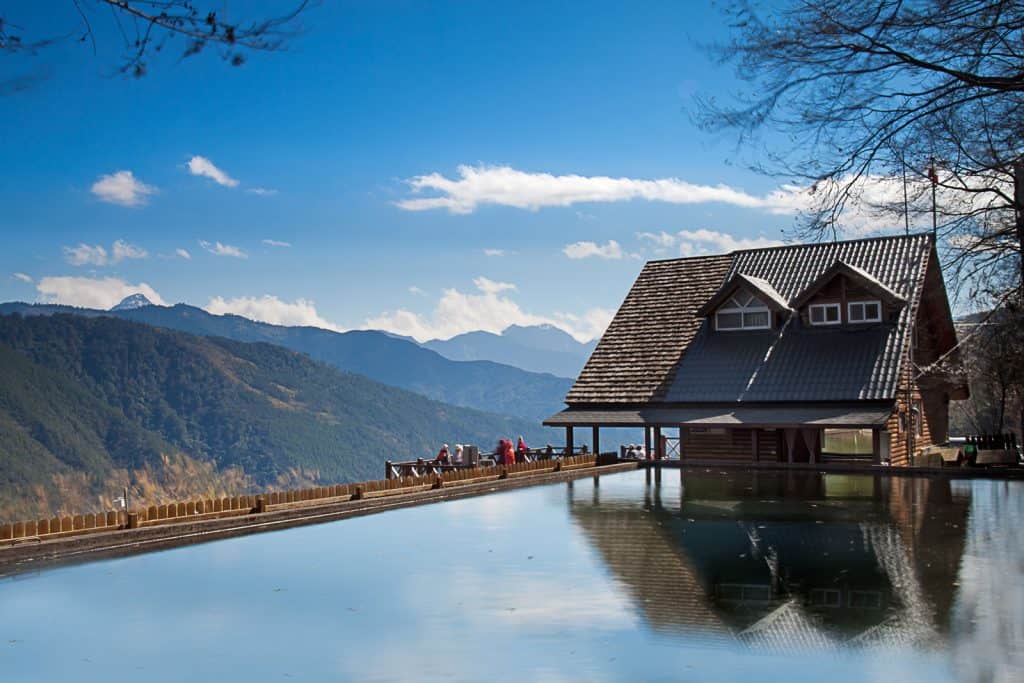 That’s not to say there’s nothing to keep you occupied in Taichung. As might be expected with its size, Taichung is one of the best places in the country to soak up Taiwanese flavours in its top-notch restaurants. Taichung is also the birthplace of Taiwan’s most famous drinkable export, bubble tea. Love it or hate it, slurping one down here should be on any traveller’s Taiwan bucket list.

Once known as little more than a grungy port city, Kaohsiung has done a fine job of tearing down its bleak reputation to become a place that’s actually pleasant for travellers. 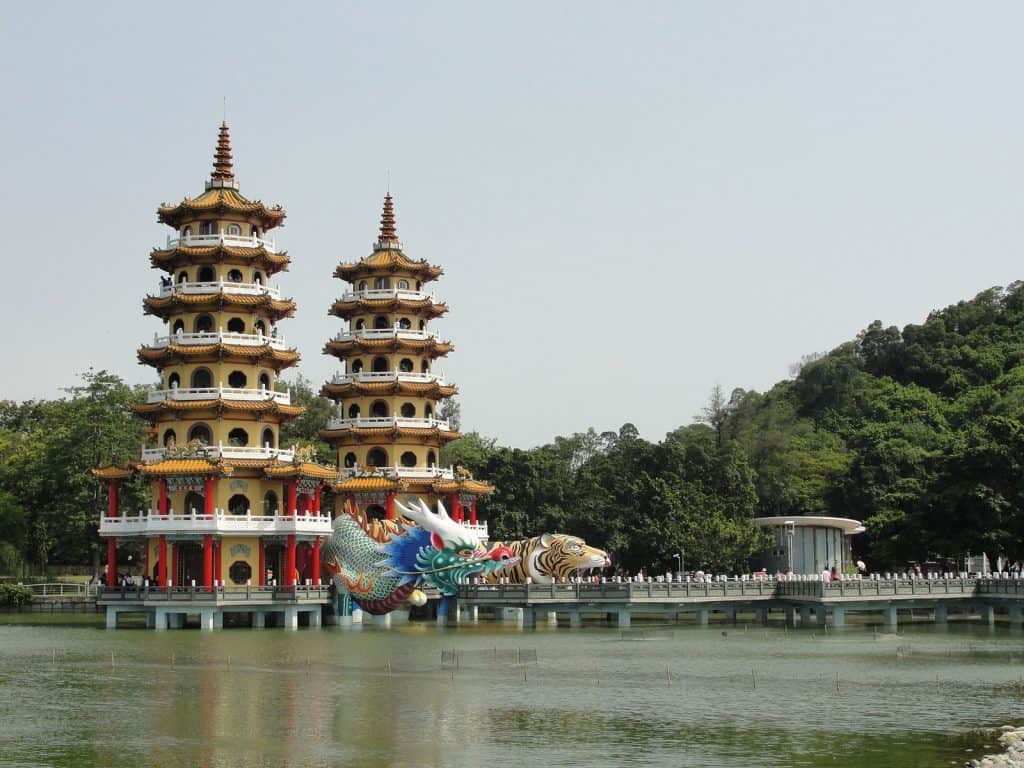 Although you won’t find anything comparable the trove of cultural sights in Tainan or the never-ending urban buzz of Taipei, Kaohsiung’s got a little of both. From the colourful, if sometimes kitschy, temples around the Lotus Pond to night cruises along the Love River, Kaohsiung’s worth at least a little bit of your time, even if just for a quick stopover on a time-crunched itinerary.

Not sure how to start planning your trip to Kaohsiung? Here are a few resources:

Looking for cheap flights to Taiwan? Check out fares on FlightNetwork or Skyscanner.

Keeping up with East Asia’s penchant for excellent transport links, Taiwan is as easy a place to travel around as any. Whether you’re travelling by air or overland, it’s relatively quick and painless to scoot around the island.

By train: Travelling by rail is undoubtedly the most convenient way to travel around Taiwan. The service is improving all the time, especially now that Taiwan’s high-speed rail lines are pushing the ten-year mark. The most popular high-speed lines zip along the Taipei to Kaohsiung significantly cutting travel times between all the major western Taiwanese cities (Taipei, Hsinchu, Taichung, Tainan, Kaohsiung). Regular train services are cheap but sometimes far slower, taking more than twice as long between certain destinations.

By bus: The network of buses in Taiwan is comprehensive and a budget-friendly way to travel around the country. As expected, bus routes generally take longer than trains. For some destinations like Lukang, Puli and Sun Moon Lake, buses may be your only public transport option.