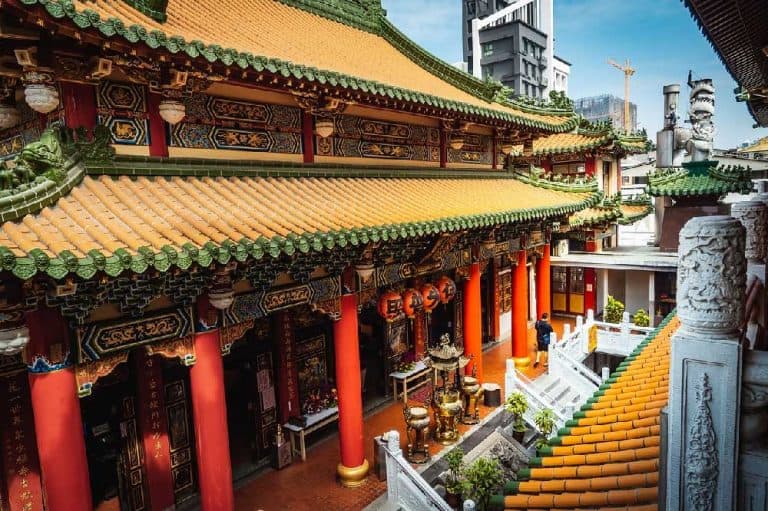 Kaohsiung is located along the southern coast of Taiwan. For most of its modern history, the city has thrived as the industrial centre of the country.

Known as the maritime capital, the coastal city of Kaohsiung is also becoming one of the best places to visit in Taiwan. The city has focused on its tourism industry in recent years. Now you’ll find excellent jazz bars, impressive museums, and lots of open green space.

Instead of a few hotels near the harbour, you now have a wide selection of choices for where to stay in Kaohsiung.

Each area has its own distinct benefits and convenient access to different attractions. Whether you want to stay near the beaches or the historical sites, you’ve got plenty of choices.

While most of the cityscape includes skyscrapers and modern developments, you’ll also find dozens of temples and public parks.

Not sure where to search? Start looking for accommodations with this guide to the best places to stay in Kaohsiung…

Where to stay in Kaohsiung: A complete guide to the best neighbourhoods & areas for travellers 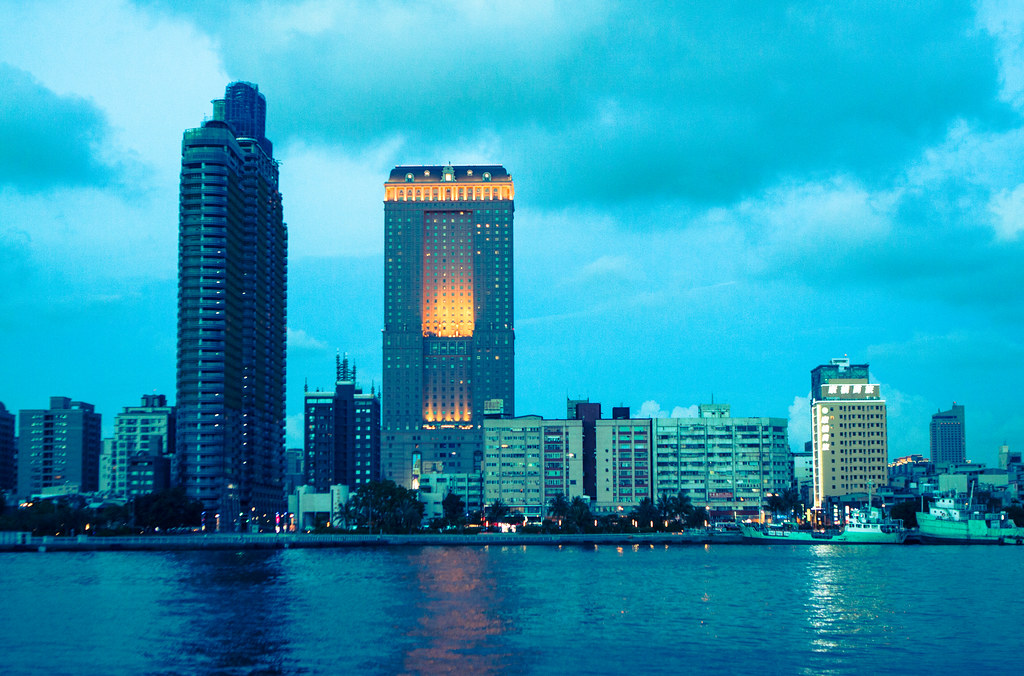 As you travel further from the coast, you’ll discover a modern city with wide, pedestrian-friendly streets. It’s a great city to explore on foot.

Of course, you can also give your legs a rest and rely on public transportation. Bicycle rentals offer a popular mode of transportation, and the city even has a Taxi English Service – allowing you to search specifically for English-speaking drivers.

Outside of the harbour, the city has markets, a historic village, and several shopping districts. Depending on where you stay, you’ll also come across museums and the biggest mall in Taiwan.

The best areas to stay in Kaohsiung for travellers include:

✔ Best area to stay in Kaohsiung for shopping & nightlife 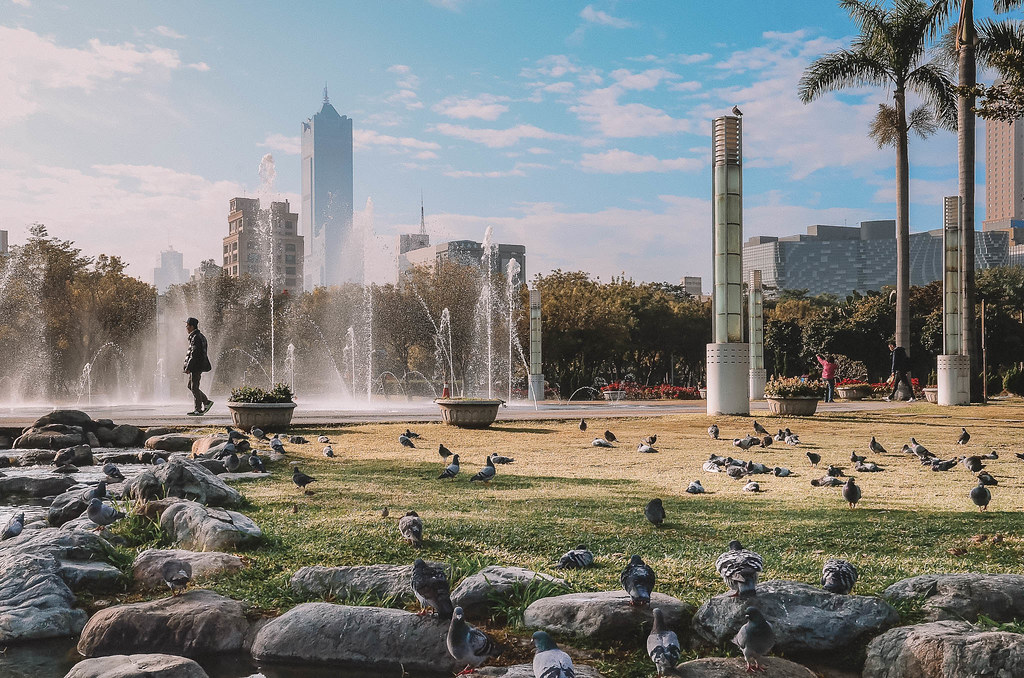 It’s not the biggest district, but it has the most shopping and entertainment. It’s home to Liuhe Night Market, the Yuansu Yuchu Shopping Area, and the Shinkuchan Shopping District. Between these three locations, you can find just about anything, from electronics to clothing to street food.

The Night Market is a popular spot for shopping for souvenirs, while the shopping districts offer endless department stores and boutique shops.

Xinxing is also a short trip from other areas of the city, due to its central location. The harbour is a few city blocks to the southwest, and Lingya district covers the area to the east.

If you enjoy cycling, you could call Xinxing your home for the night and reach just about any part of the city on a bike during the day.

As the district borders the KRT Central Park Station, you can also hop on a bus and quickly get to the destinations on your Kaohsiung itinerary.

Your options for accommodations in Xinxing district include various business hotels and three-star or four-star locations. As the hotels are near the centre of the city, vacancies disappear quickly during peak tourist seasons.

✔ Top area to stay in Kaohsiung for culture & history lovers

Zuoying district is in the northern part of the city, covering the area that includes Lotus Pond. Compared to the other districts, it’s further from the harbour, but it also has its own collection of attractions to keep you busy. 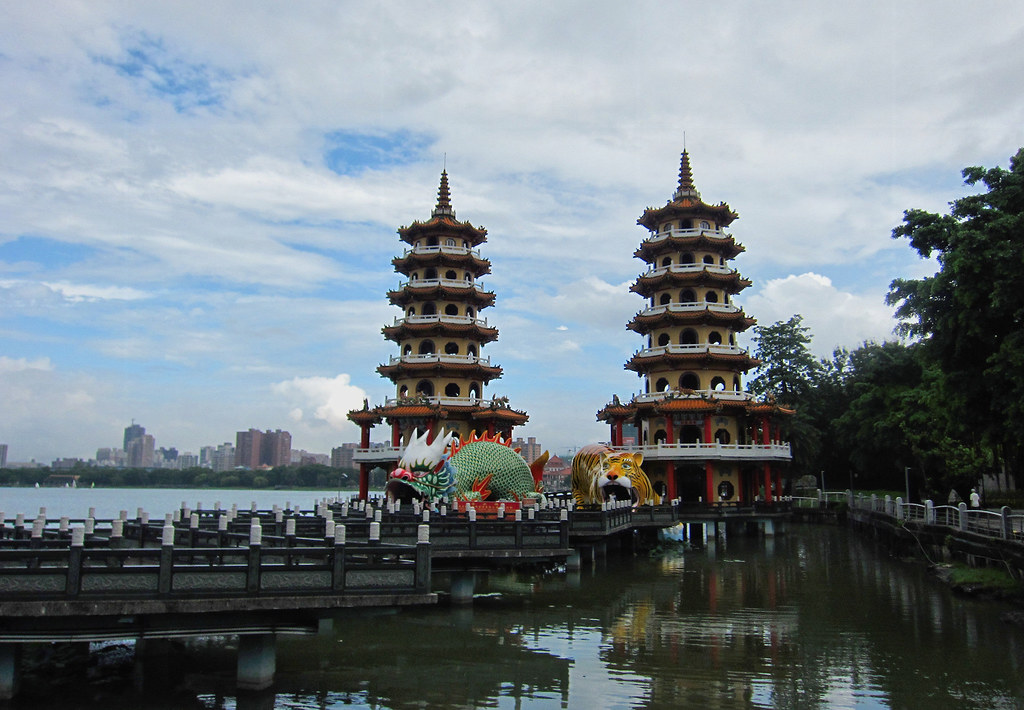 The area around Lotus Pond includes several important cultural and historical sites. You could spend an entire day visiting the Dragon and Tiger Pagodas, Zuoying Yuandi Temple, and other temples located on the western shore of the pond.

Just south of the pond, the district includes the Old City of Zuoying. Hundreds of years ago, the city had a defensive wall. Some parts of the old city walls remain, along with a few other historic buildings and gates.

While Zuoying is best suited for culture and history aficionados, it also offers shopping. The Rueifong Night Market is a few blocks southeast of the pond, on your way to Love River.

The bustling outdoor market has dozens of vendors selling handicrafts, clothing, and food. As a night market, the vendors don’t start setting up shop until the afternoon.

You don’t have a lot of options for accommodations in Zuoying District. In fact, there are currently about four hotels in the area, with one hotel on each side of Lotus Pond.

✔ Top-rated area to stay in Kaohsiung for luxury shopping & sightseeing

The Lingya district includes some of the top attractions in Kaohsiung. Located just south of the Xinxing district, the area includes 85 Sky Tower, the cultural centre, and several of the city’s parks.

Lingya also extends to the harbour. From your hotel, you may be able to walk to Holy Rosary Cathedral and the various shops and restaurants lining the harbour area.

You can also cross Lingualeo Iron Bridge to reach the main harbour district. On the other side of Love River, you’ll find the Pier2 Art Center and several of the city’s museums.

You’ll also have a lot of reasons to stay in the district. Lingya has some of the city’s best restaurants and high-end shops. It’s also home to several night markets with the typical assortment of vendors selling a little bit of everything.

If you’re looking for designer clothes and accessories, visit Sanduo Shopping District in the western part of Lingya. Within several blocks, you can visit a handful of department stores and clothing boutiques offering name brand clothing.

Lingya district has some of the best hotels in Kaohsiung based on customer reviews. Choose from four-star hotels located near some of the top attractions. There are even a few hotels located inside 85 Sky Tower, offering views of the city from your hotel room.

Sanmin is one of the more laidback districts, as it attracts fewer tourists compared to the other areas. It doesn’t have a lot of attractions to entice visitors to its streets, but you may enjoy the quieter setting. 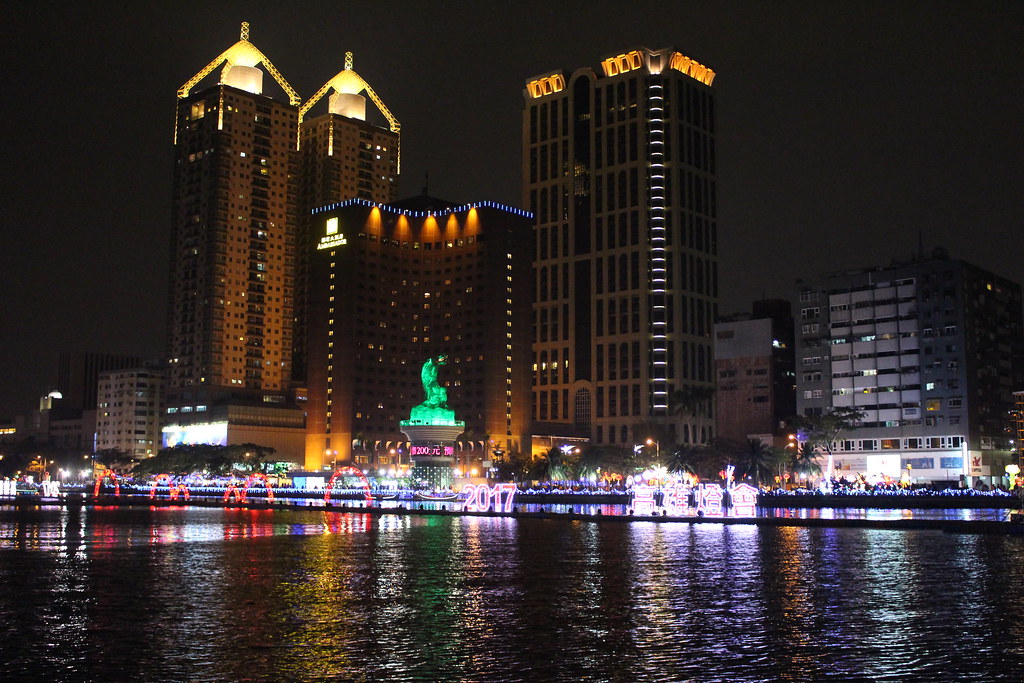 This district is just south of Zuoying and north of Xinxing, covering a large portion of central Kaohsiung. It’s mostly comprised of residential districts with a few shopping districts scattered throughout the area.

Sanmin also borders the northern portion of Love River. In fact, the heart of the river is located just north of some of the best hotels in the Sanmin district.

The riverfront area includes a couple of small parks with boat rentals and tours that take you down the river and to the harbour.

If you’re looking to get away from the tourists, travel further into the district. In the northeastern corner of the district sits Fudingjin Baoan Temple. It’s one of the most impressive temples in the city, yet people tend to overlook it, travelling to the temples surrounding Lotus Pond instead.

Sanmin includes a diverse selection of hotels, hostels, and apartments. Most of these options are found in the western part of the district, close to the harbour and a short walk from the other districts.