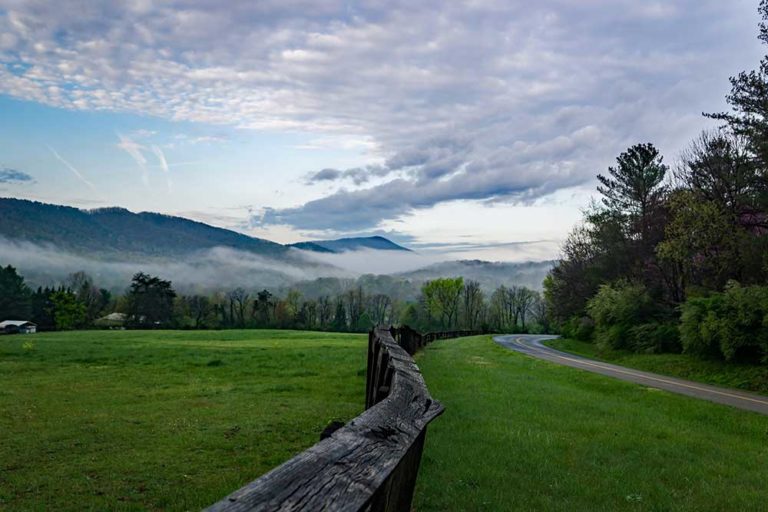 The birthplace of modern America, Virginia is an unmissable destination for travelers buzzing around the Northeast USA. The state’s rich heritage dates back to the early days of European settlement when English colonists arrived at Jamestown in 1607. Since then, the Commonwealth of Virginia has borne witness to all of the nation’s major historical milestones, from the American Revolutionary War to the American Civil Rights movement.

Ready to experience the Mother of States? Plan your ultimate itinerary with this quick & easy Virginia travel guide.

Where to go in Virginia

While it’s far from Virginia’s most famous travel destination, there’s no better place to launch your exploration of the state than the charming city of Richmond. 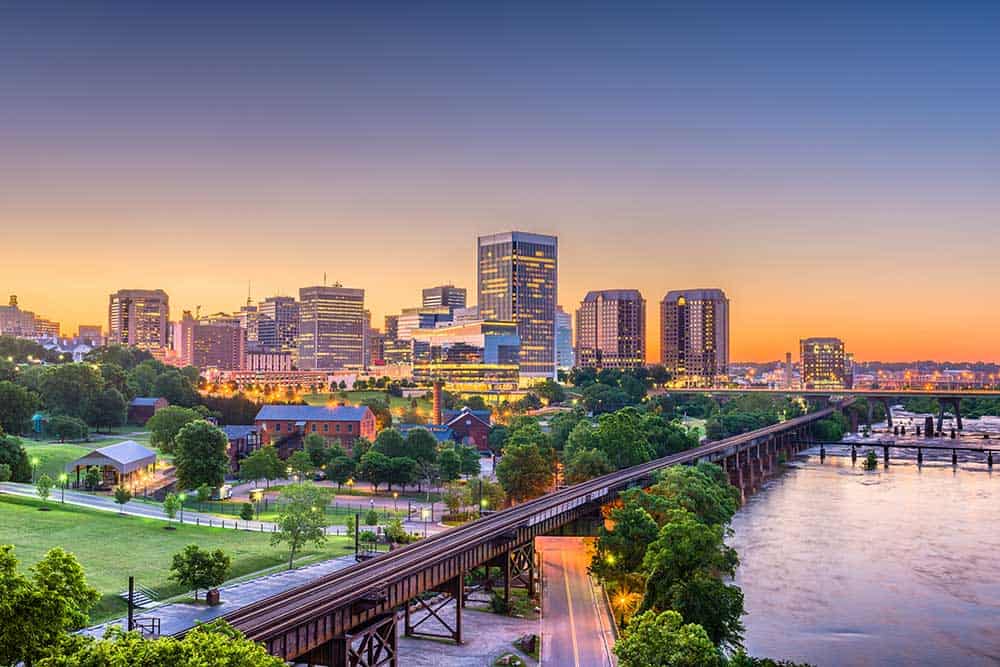 The former capital of the Confederacy and Virginia’s state capital since 1780, Richmond, unsurprisingly, wears its history on its sleeve. But visitors keen on looking past the city’s deep Southern roots will find plenty more to love about this modern city.

Like many cities in the American South, Richmond is reinventing itself as a hub of creativity. Its youthful surge has brought in an influx of trendy restaurants, craft breweries, and art galleries, set to a backdrop of stately 18th- and 19th-century homes and a smattering of beautiful green spaces.

Ready to plan your trip to Richmond? Get started with these travel tips & resources!

To toss a little seaside fun into your Virginia trip, don’t miss the chance to relax in Virginia Beach. Sprawling the shores of both Chesapeake Bay and the Atlantic Ocean, the lively coastal resort city is famed for its seaside boardwalk, historic state parks, and, of course, its sandy beaches. 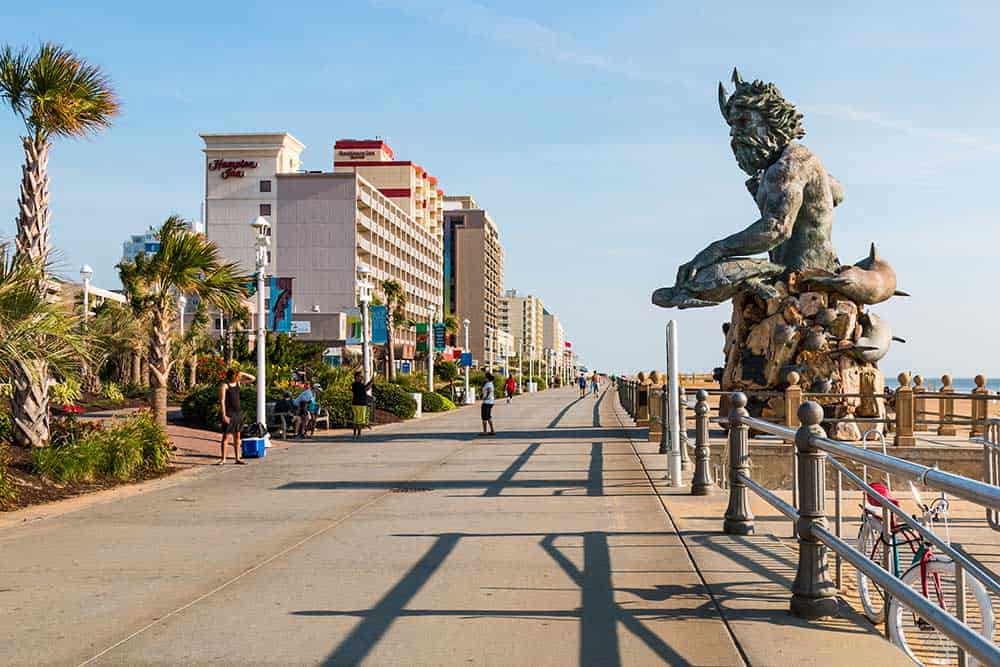 Spend your days in Virginia Beach soaking up the sun on its golden sands and strolling along the iconic Virginia Beach Boardwalk to dabble in the city’s delicious food & drink scene.

Throughout the year, Virginia Beach also hosts a variety of fun events, including the East Coast She-Crab Soup Classic in April and the East Coast Surfing Championship in August.

Ready to plan your trip to Virginia Beach? Get started with these travel tips & resources!

Nature lovers visiting Virginia need to give Shenandoah National Park a prominent spot on their itinerary. One of the most beautiful US national parks, Shenandoah is a wonder at any time of year, from the spring wildflower blooms to the bright reds, yellows, and oranges of the autumn. 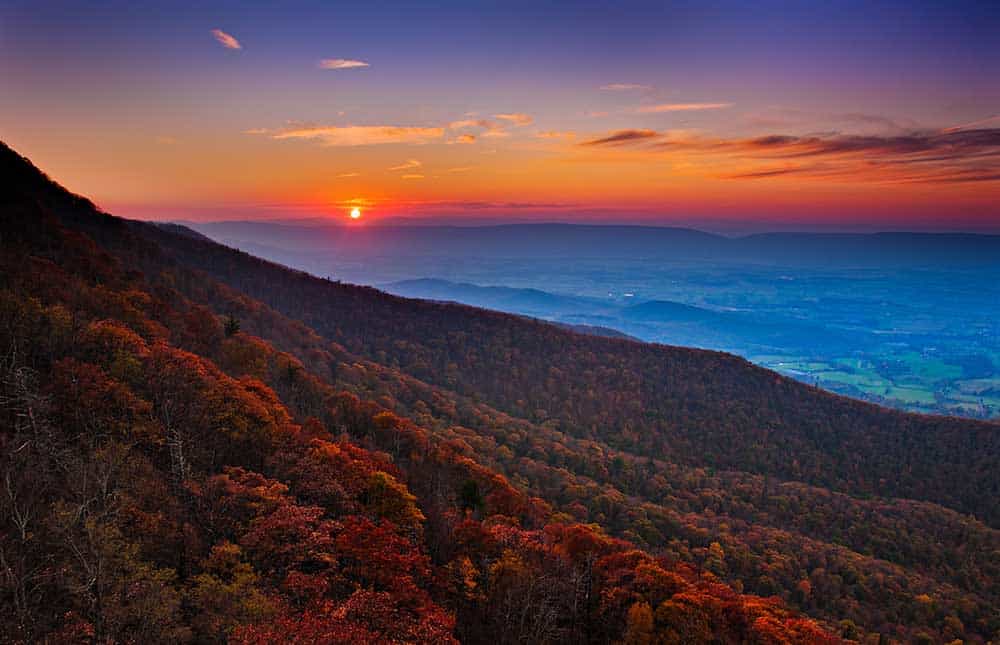 Road-trippers will love exploring Shenandoah National Park along Skyline Drive, one of the most magnificent scenic roads in the United States. Tracing the Blue Ridge Mountains ridgeline, Skyline Drive snakes through the center of the national park, running 105 miles between Front Royal and Rockfish Gap.

Shenandoah National Park also features a 101-mile-long section of the famed Appalachian Trail. If you ever wanted to scratch off a section of North America’s most epic trail, this Virginia state park offers you the chance!

The capital of the Virginia Colony between 1699 and 1780, Williamsburg is a must-see for history buffs visiting the Old Dominion. Along with nearby Jamestown and Yorktown, Williamsburg forms the Historic Triangle, comprising some of the most important historic sites in the United States. 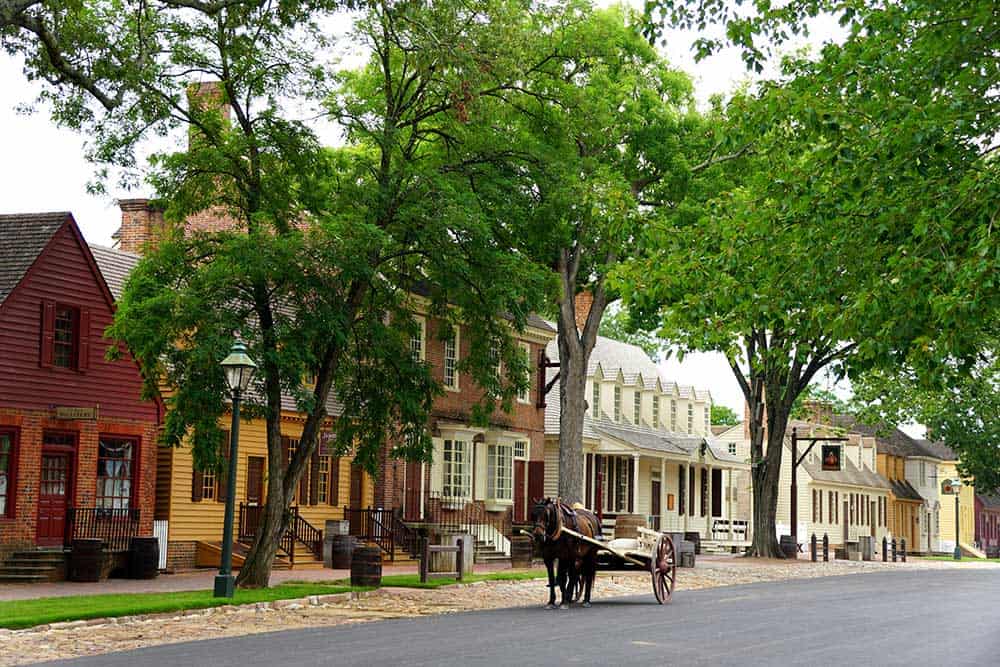 While there are plenty of attractions abound, the historic city is famed for its historic district, Colonial Williamsburg. In Colonial Williamsburg, travelers will experience one of the country’s most interesting living-history museums. Walk through 18th-century America among 88 recreated buildings as actors in period clothing reminiscence of Colonial life.

Located in the eastern foothills of the Blue Ridge Mountains, Charlottesville combines the state’s penchant for historic sites with a rich natural heritage. Thanks to its lovely location, the Charlottesville area is full of opportunities for outdoor adventure, with award-winning golf courses, rivers, lakes, and forests taking center stage. 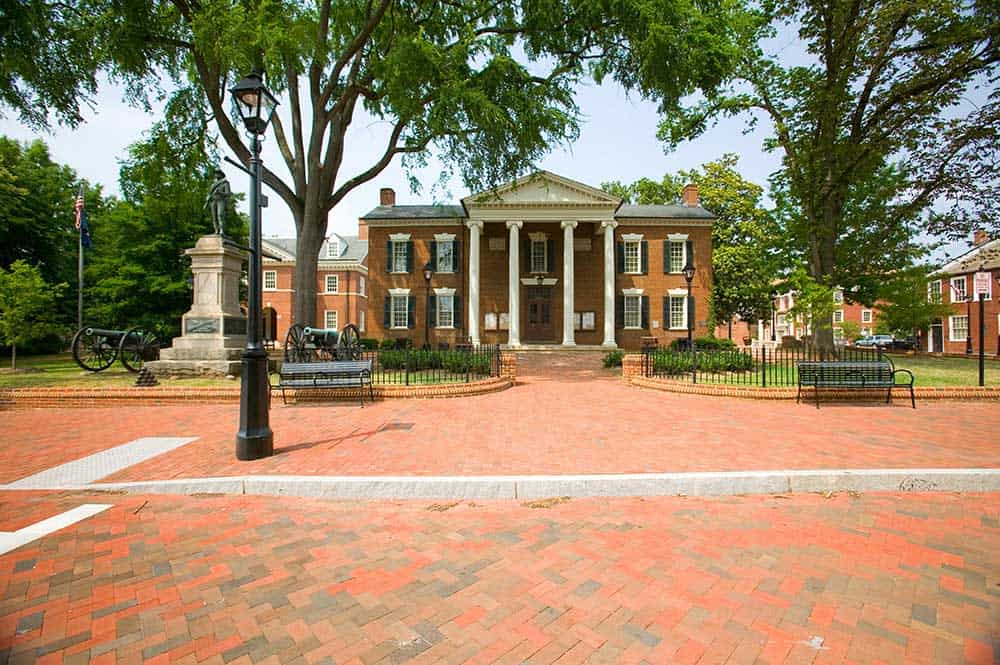 American history buffs will find themselves at home in Charlottesville, too. Walk in the footsteps of Thomas Jefferson at Monticello, the Founding Father’s former home, and on the campus of the University of Virginia, which Jefferson founded in 1819. C’Ville is also home to Highland, the estate of former president James Monroe.

When you’re done with the historical sightseeing, roam through the boutique shops, used bookstores, and antique shops in downtown Charlottesville. End the perfect vacation with a day trip along the Monticello Wine Trail, offering a choice to visit 40 local wineries to taste the state’s finest wines.

While Norfolk doesn’t get much love from travelers, Virginia’s second-biggest city is well worth a gander if you’re looking to add some cosmopolitan charms to your visit. 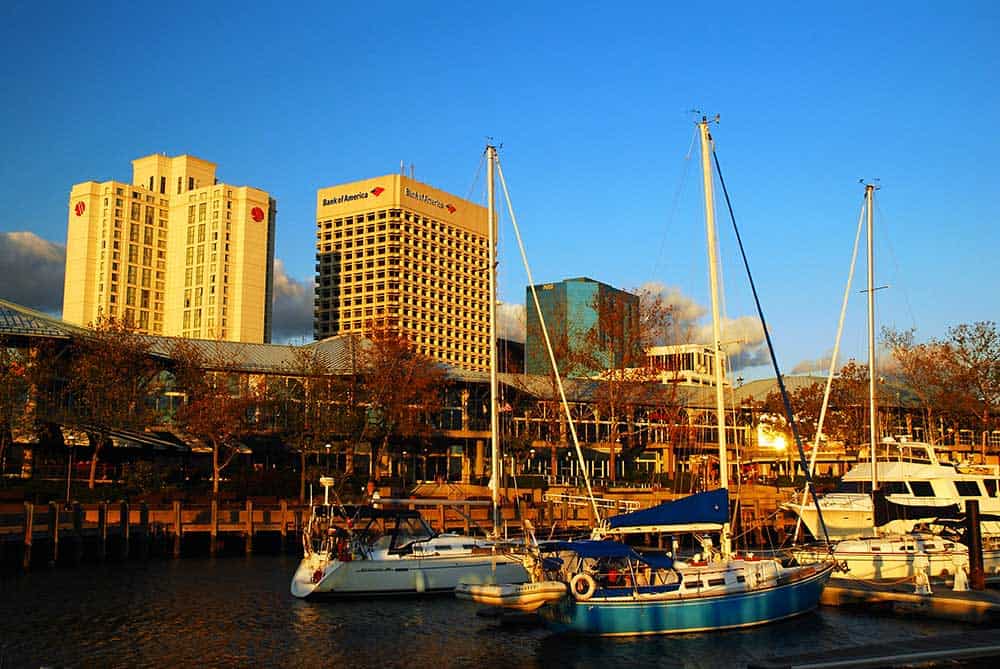 Culture lovers should start with Norfolk’s Chrysler Museum of Art. With more than 30,000 pieces of art, it’s one of the top art museums in the USA, spanning 5,000 years of artwork. Or settle in for a concert or Broadway show at Chrysler Hall, the city’s top performing arts venue.

Perched within the Blue Ridge Mountains in southwest Virginia, Roanoke spins together a superb menu of outdoor activities with a dash of culture for the ultimate Virginia urban experience. 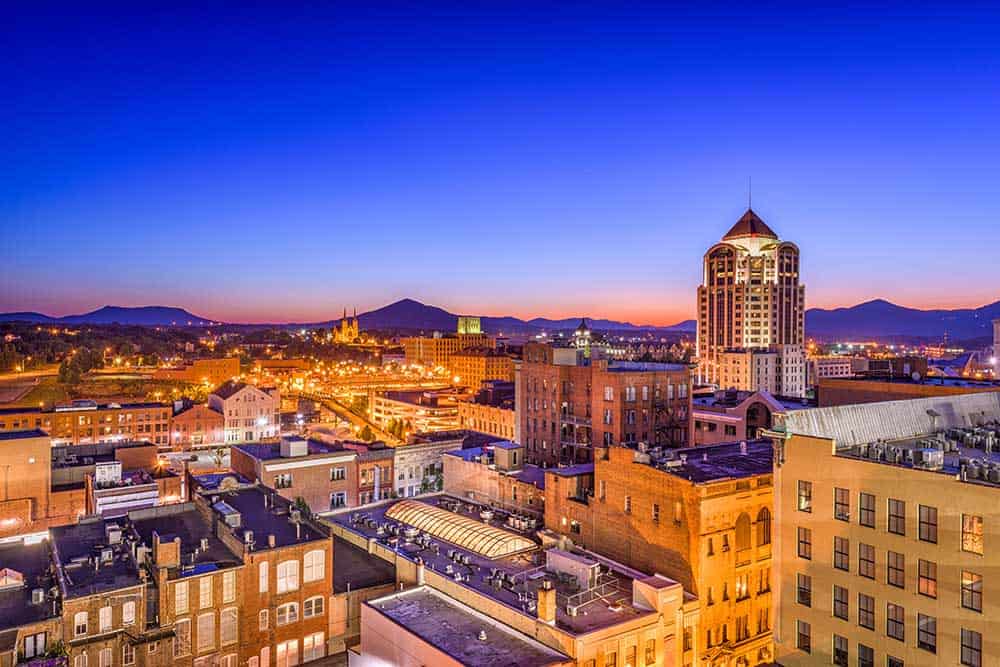 With over 14,000 acres of parkland and 100 miles of trails, Roanoke beckons outdoor adventurers. Grease up your chain and hit the city’s trails for a mountain biking adventure. Or fill up the tank for a ride along the Blue Ridge Parkway, one of the most scenic routes in the United States.

After basking in nature, spend an afternoon getting your culture fix by visiting the Taubman Museum of Art. The city’s most popular art museum features an array of outstanding artwork from famed American artists like John Singer Sargent and Thomas Eakins.

When to visit Virginia

The best time to visit Virginia is between April and October. From mid-April to early May, you’ll enjoy dry and warm weather before the start of late-spring/summer rain showers. September to October is likewise pleasant, with mild to warm temperatures and mostly dry days. 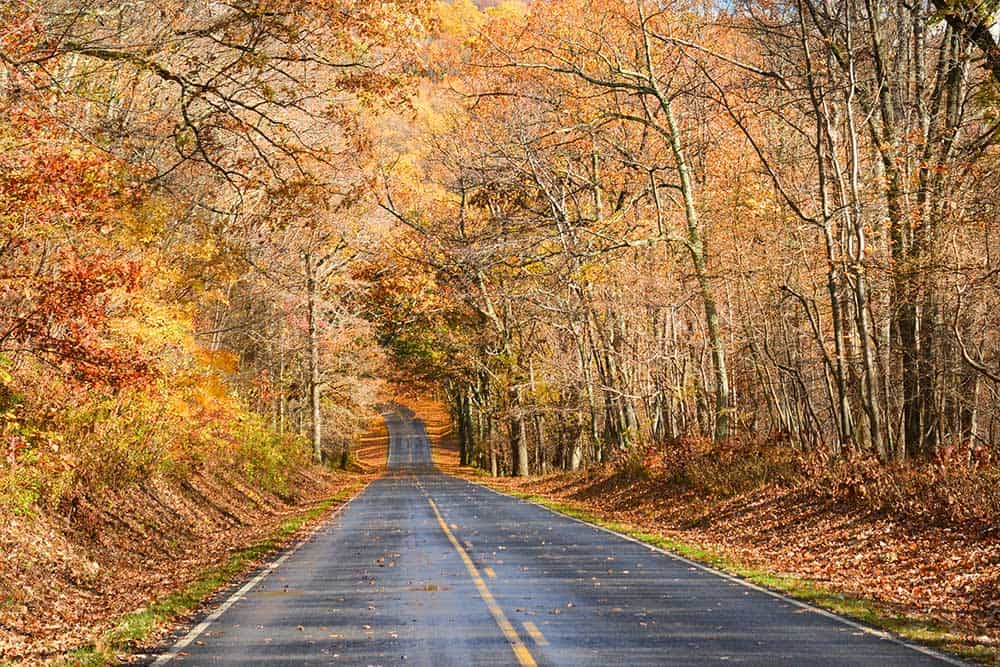 Summer in Virginia tends to be hot and humid, with thunderstorms roaring in from time to time. The peak of the tourism high season also falls in the summer months. Expect higher prices and lower availability at this time of the year.

How to get to Virginia

Virginia is home to nine commercial airports. Most travelers flying into Virginia enter through one of its seven largest airports:

Virginia is well-connected by road to the neighboring states of Maryland, North Carolina, Tennessee, Kentucky, and West Virginia, as well as Washington, DC. Popular road routes into Virginia and approximate driving times include: