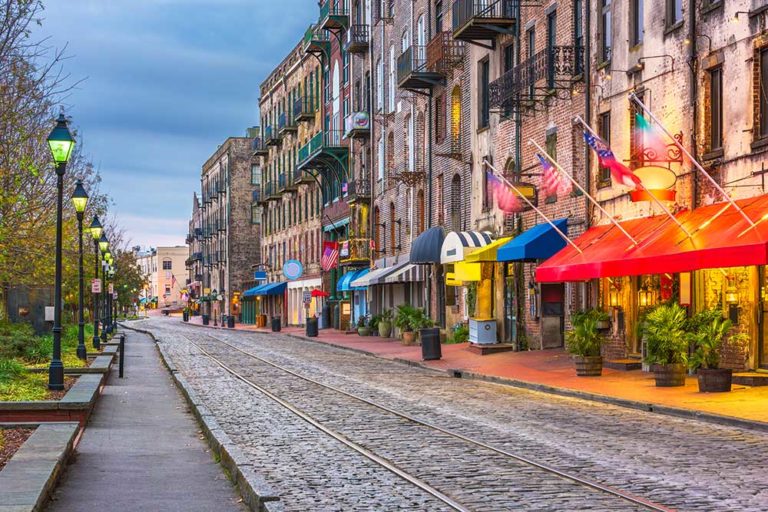 No destination in the United States embodies Southern hospitality like Georgia. Wedged between five states and the Atlantic Ocean, The Peach State is one of the Southeast’s biggest surprises. For travelers, Georgia folds in everything from white-sand beaches to forested mountains.

Visiting Georgia, you’ll spend your days dipping your toes in the Atlantic at Jekyll Island or Cumberland Island. You’ll hike among breathtaking natural wonders in state parks like Providence Canyon or Tallulah Gorge.

Georgia is also famed for its historic cities. The Peach State’s urban crown jewel is none other than Savannah. Centuries-old Savannah is one of the nation’s most charming historical cities. Or, for a taste of modern Georgia, venture to the capital of Atlanta. The state’s largest city, Atlanta mashes family-friendly attractions with history & modern culture.

Ready to plan your trip to Georgia? Hash out the perfect itinerary with this quick & easy Georgia travel guide.

Where to go in Georgia

Need an introduction to Georgia? Make Savannah your first stop. Founded in 1733, the historic Savannah city center shows off a charming aging façade. Leafy Savannah is one of the country’s biggest surprises. 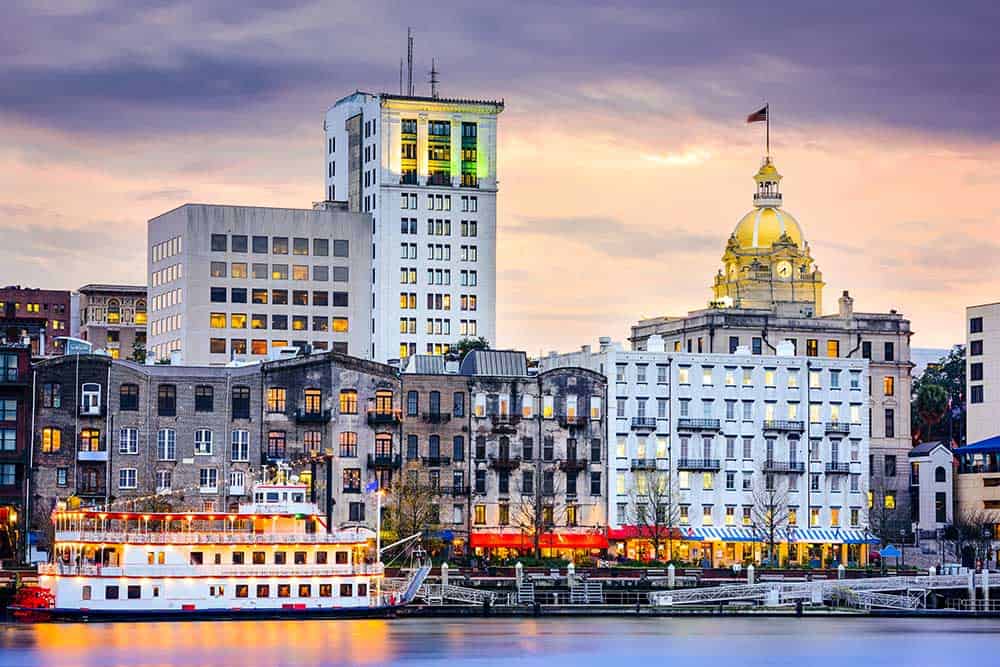 Roam through its leafy Historic District to whisk back to the nation’s foundations. Its antebellum houses are among North America’s prettiest. Their range of architectural styles—from Greek Revival to English Regency—are bound to catch your eye.

The riverside city’s trading history comes alive along River Street. Once the center of the city’s cotton trade, River Street is now one of Savannah’s most alluring corners. Savor a meal on one of its rooftop bars, soaking in a sunset on the Savannah River.

Ready to start planning your Savannah adventure? Get started here:

Georgia’s capital & largest city, Atlanta is one of the nation’s most-visited cities. And while its allure isn’t as instant as Savannah, there’s plenty to love about the ATL.

In Atlanta, antebellum and modern history & culture collide. The city was instrumental in both the American Civil War and the Civil Rights Movement of the 1960s. Throughout Atlanta, you’ll find plenty of sites honoring both. 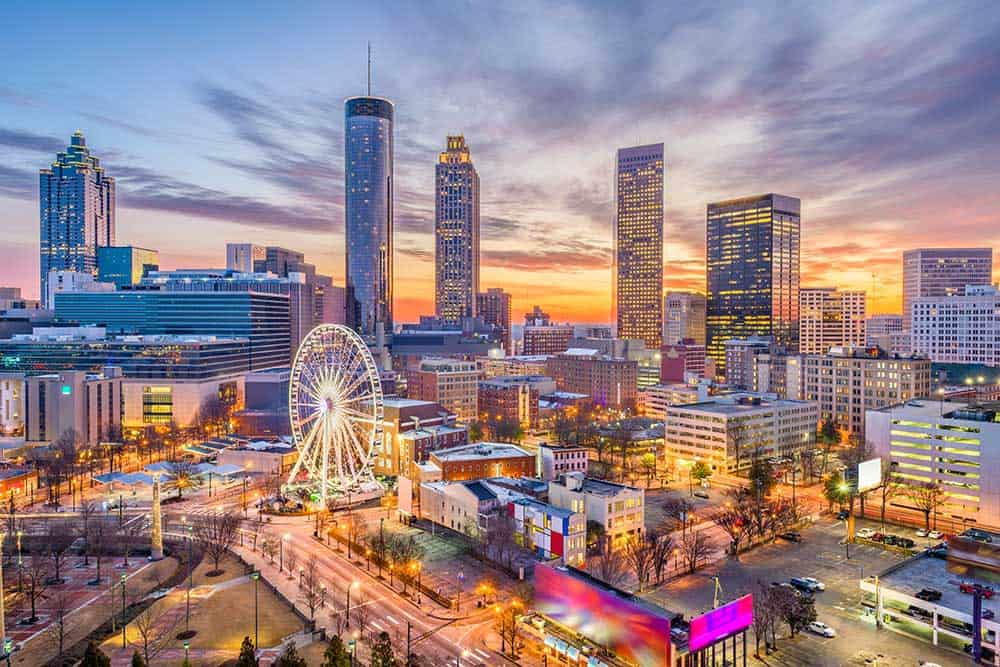 Among Atlanta’s varied tourist attractions, you’ll see world-class museums and family-friendly adventures. The city’s top cultural attraction is National Center for Civil and Human Rights. Detailing the history of the civil rights movement, it’s one of the nation’s most important museums.

The Southern city also hosts one of the country’s most innovative culinary scenes. In areas like West Midtown, you can chow down on elevated Southern food at trendy chef-driven restaurants.

Ready to start planning your Atlanta adventure? Get started here:

Located 30 minutes east of Savannah, Tybee Island is one of Georgia’s finest seaside escapes. The Atlantic barrier island is famed for its sandy beaches and historical sites. 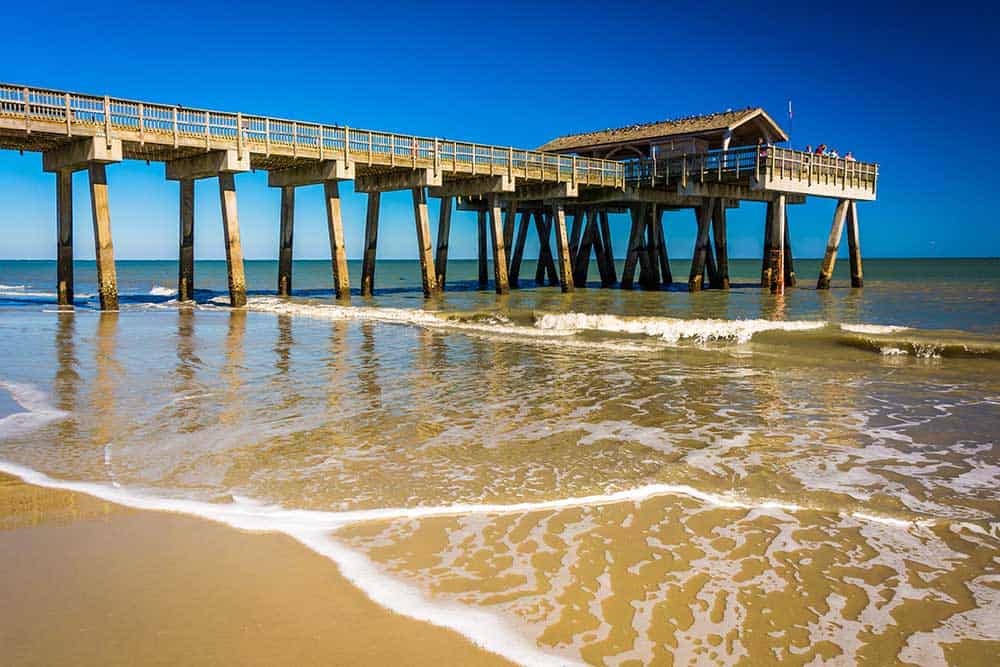 While visiting Tybee Island, save time to explore Fort Screven. The 19th-century military fortress was an important defense outpost in the Spanish-American War and the two World Wars. Even older is the nearby Tybee Island Light Station & Museum. Built in 1736, the 145-foot tower offers incredible views over the Atlantic.

History not your thing? Soak up some sun on Tybee Island’s South Beach. While it’s not as electric as its namesake in Miami, the coastal beach is a good place to dip your toes into the Atlantic waters.

Searching out Georgia’s coastal charms? Set aside a few days to explore Jekyll Island. The barrier island is the southernmost and most popular island in Georgia’s Golden Isles. If you’ve got an extra day or two, it’s a wonderful addition to your Georgia itinerary. 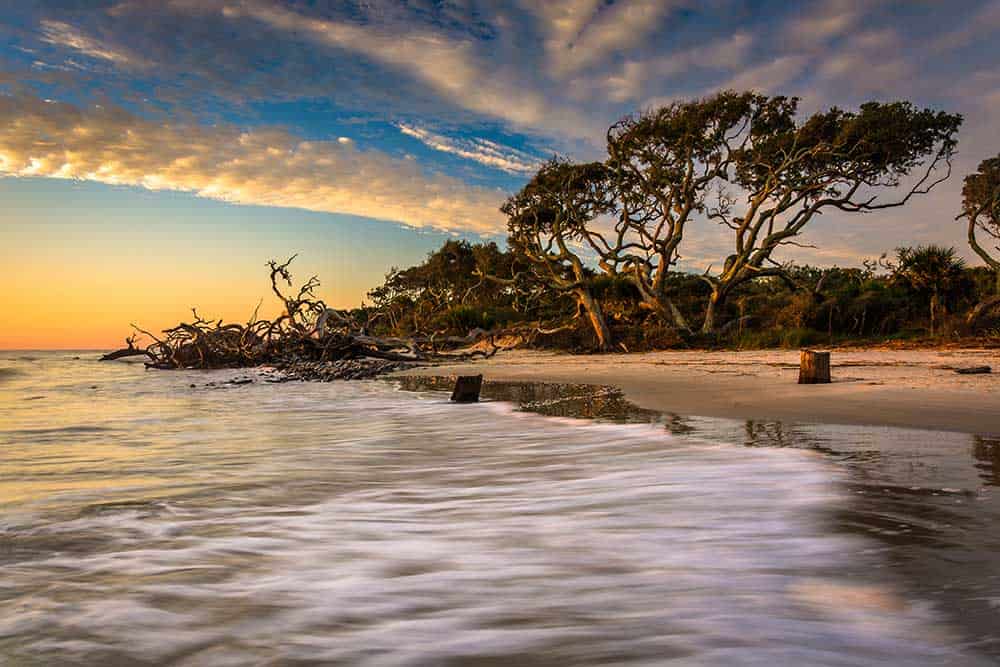 Jekyll Island teems with activities, from golf courses to horseback riding to dolphin tours. For most travelers, though, the highlight of Jekyll Island is Driftwood Beach. Located on the island’s northern edge, Driftwood Beach has an otherworldly feeling to it. Walk along its golden sands, snapping pics of its striking gnarled driftwood.

Although less than 500 call it home, Helen is one of the most-visited towns in Georgia. The Blue Ridge mountain town charms visitors with its European alpine village vibe. You wouldn’t be alone in thinking Helen is more well-suited to the Bavarian Alps than the Peach State! 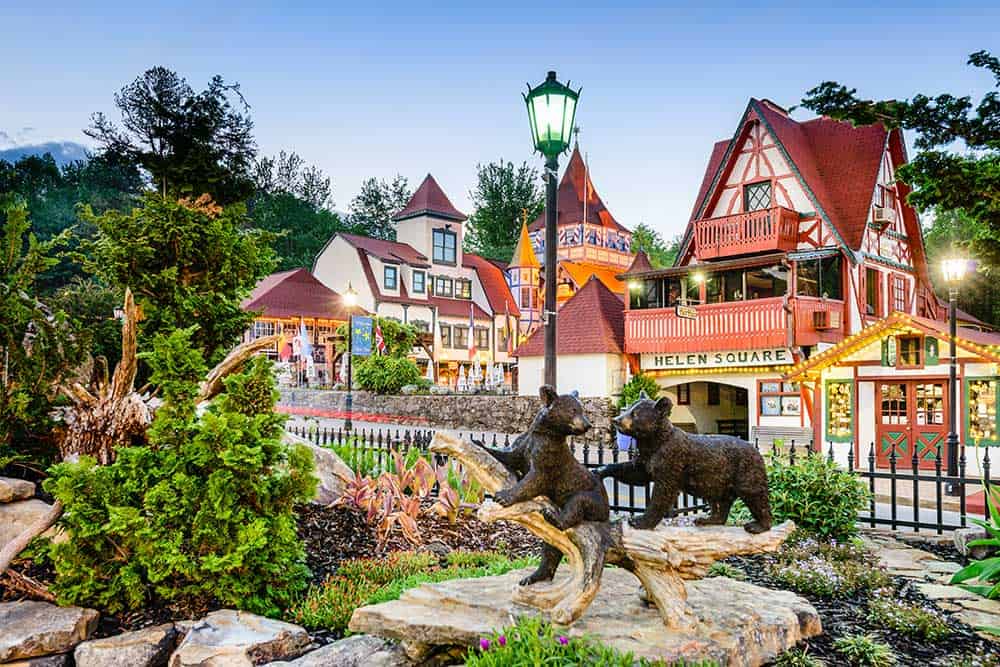 As you’d expect, outdoor adventure is the main draw in Helen. Hit up the hiking trails of the Chattahoochee National Forest. You’ll marvel at natural wonders like the 200-foot-high Anna Ruby Falls.

Helen is also known for its vineyards. Spend a day along the Unicoi Wine Trail to savor the region’s finest wine with delectable food pairings.

Located an hour outside Atlanta, Athens is a favorite weekend urban getaway for Georgians. The college town is famed for its arts & culture scene and handsome antebellum architecture. If you’ve got an extra day in the capital, Athens is worth a buzz-through. 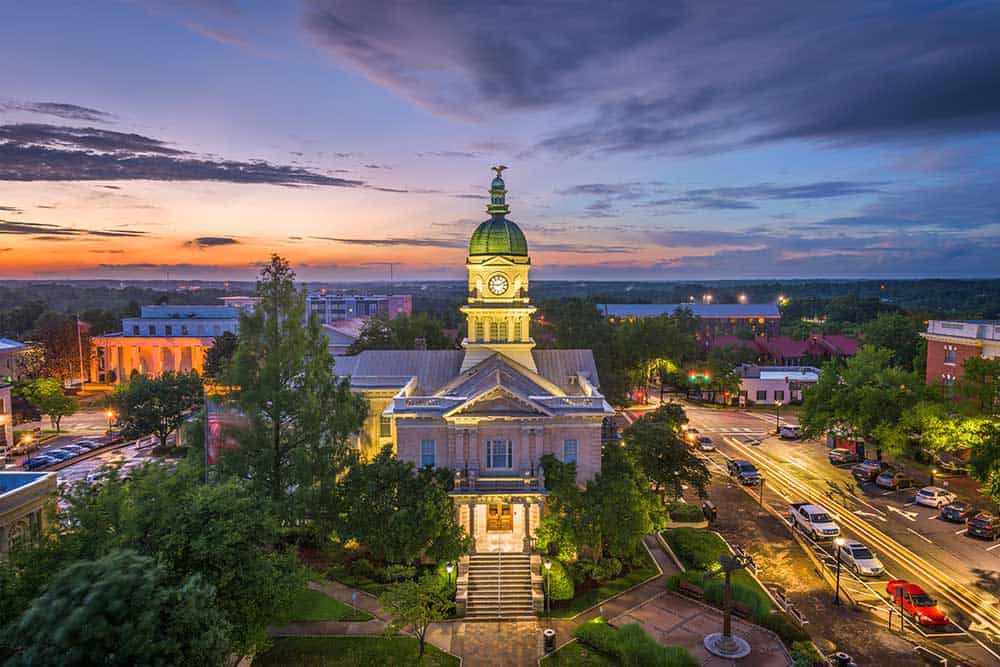 Like other old Southern cities, Athens is jam-packed with historic sites. One of the best places to start is at Lyndon House Arts Center. In the historic home, you’ll explore Athen’s past and a delightful art gallery.

In the evening, spend time sipping brews at one of the city’s craft breweries. Or explore Athens’ music scene, where alternative rock bands like R.E.M., the B-52’s, and Neutral Milk Hotel got their starts.

When to visit Georgia

The best time to visit Georgia is in late spring and early autumn. In both these shoulder seasons, visitors will enjoy mostly pleasant weather. On average, however, spring tends to be wetter than autumn. If you want to experience Georgia at its driest, visit between September and November. 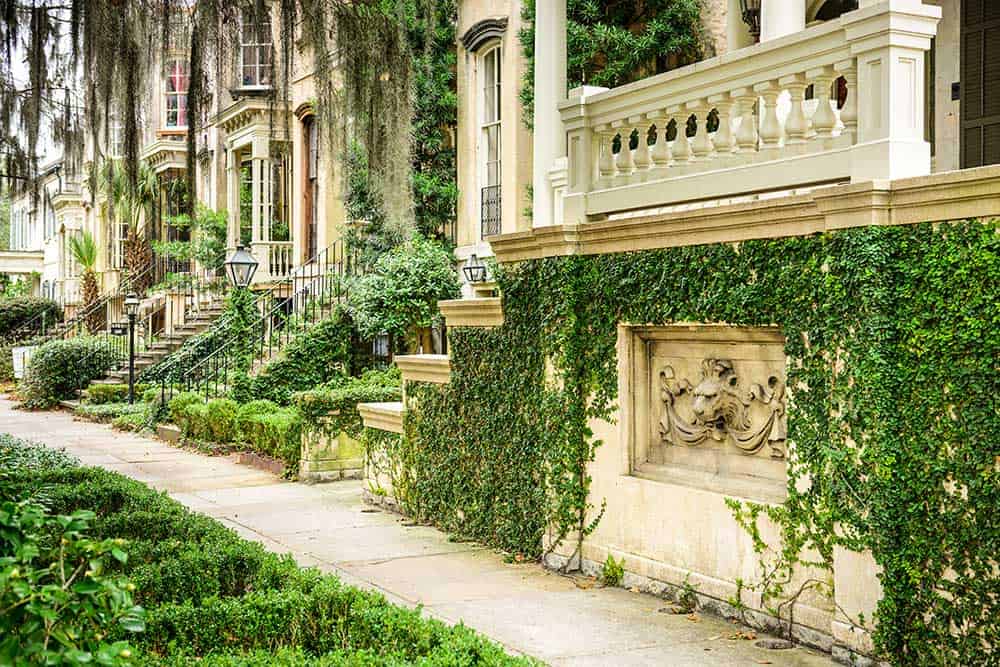 Summer is the busiest season for tourists in Georgia. In summer, accommodation prices hit their peak. Weather-wise, summer also isn’t the ideal time of year. Summer in Georgia tends to be hot & humid with an ever-present chance of rainfall. If you must visit in summer, be sure to pack an umbrella. (And keep your outdoor plans flexible.)