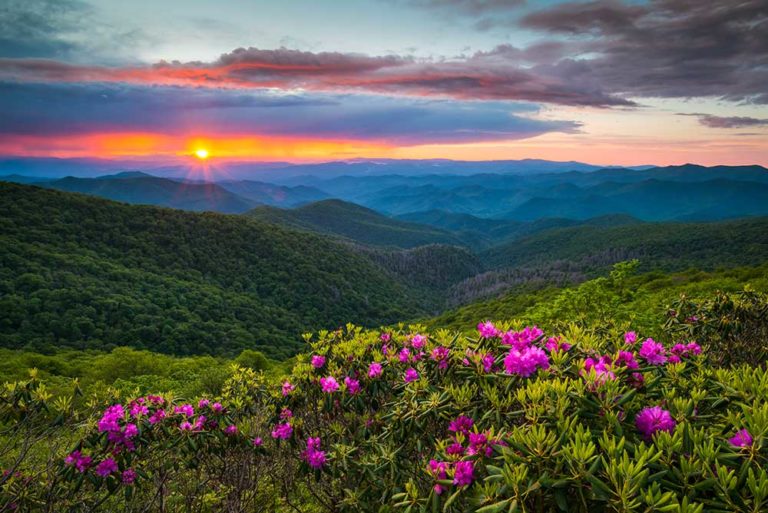 A crossroads of the Old South and New South, North Carolina is one of the biggest surprises in the Southeastern United States. The Tar Heel State charms its guests with a mix of hip urbanism and rural tradition that’s unmatched anywhere along the East Coast.

Where to go in North Carolina

Need a primer for your North Carolina trip? Start with the exciting city of Asheville. Located in the Blue Ridge Mountains in Western North Carolina, Asheville is the state’s most interesting place to visit. It’s a favorite destination for outdoor adventurers and culture seekers alike. 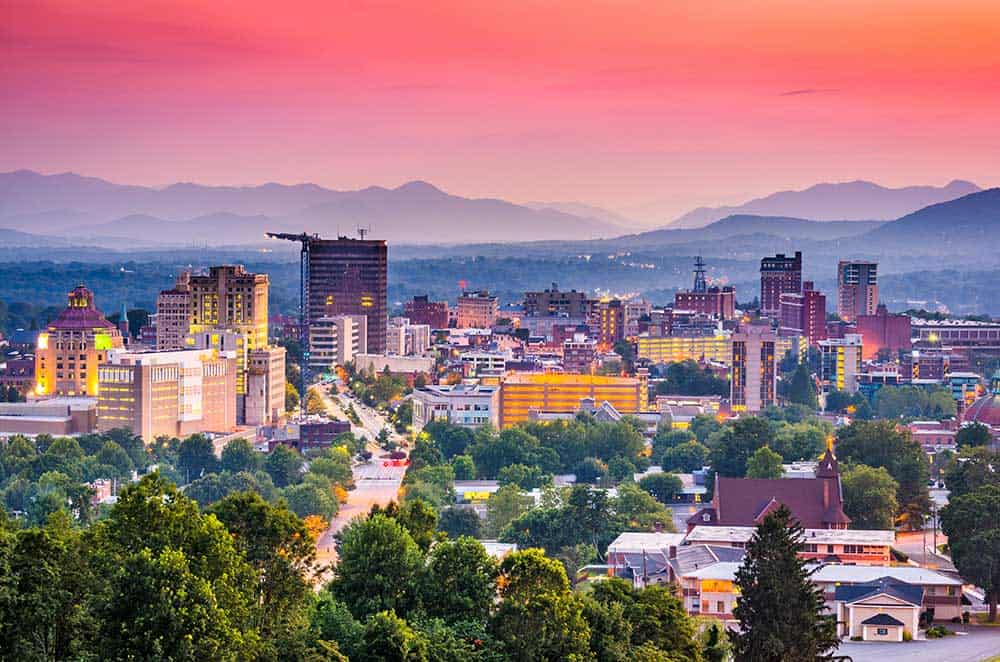 Outside of the city center, slip back into the late-19th century at the Biltmore Estate. Built by George Vanderbilt, the estate’s home is the largest former private residence in the US. Spend time exploring the home and wandering around its gardens & forests to get the full experience.

In between your adventure, grab a seat and sip some of America’s finest craft beers at Asheville’s breweries. The city is famed for its craft beer scene, offering the most breweries per capita than any city in the United States. (Asheville’s nickname, Beer City USA, is quite fitting!)

On your Asheville trip, save time to explore its outskirts. Not far from the city, you can enjoy some of the state’s finest nature. Slip into the deep woods of Pisgah National Forest or catch a sunrise over the Blue Ridge Mountains at Mount Mitchell State Park.

Ready to plan your trip to Asheville? Get started with these Asheville travel tips & resources!

Next to Asheville, no urban destination belongs on your North Carolina wishlist more than Charlotte. With 2.6 million people in its metro area, Charlotte is the state’s biggest city. And for travelers, it’s full of interesting things to see & do. 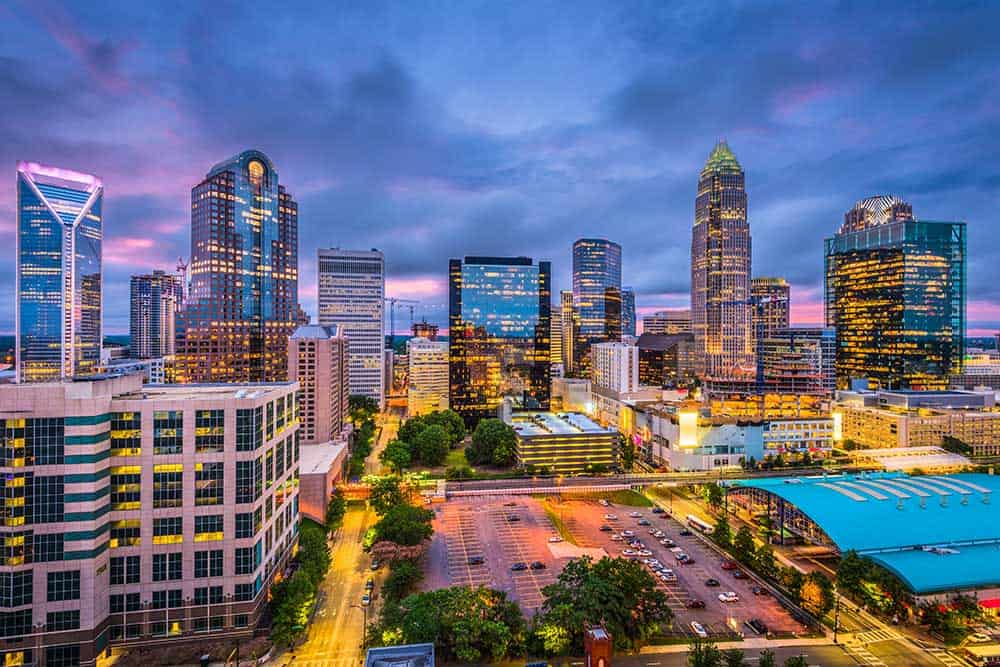 Besides Uptown, Charlotte is jam-packed with cool neighborhoods to explore. Scoot east of Uptown to Plaza Midwood to thumb through boutiques and chow down at trendy restaurants.

Ready to plan your trip to Charlotte? Get started with these Charlotte travel tips & resources!

With Asheville and Charlotte in the mix, Raleigh doesn’t get as much attention from urban wanderers on North Carolina itineraries. Nonetheless, as the state’s capital and second-biggest city, Raleigh is worth a swing through.

Although founded in 1792, Raleigh leans more towards modern than historical. Sure, you’ll scope out handsome historic buildings like the North Carolina State Capitol, built in 1796. Even more compelling, though, are the city’s restaurants and museums like the popular North Carolina Museum of Art. 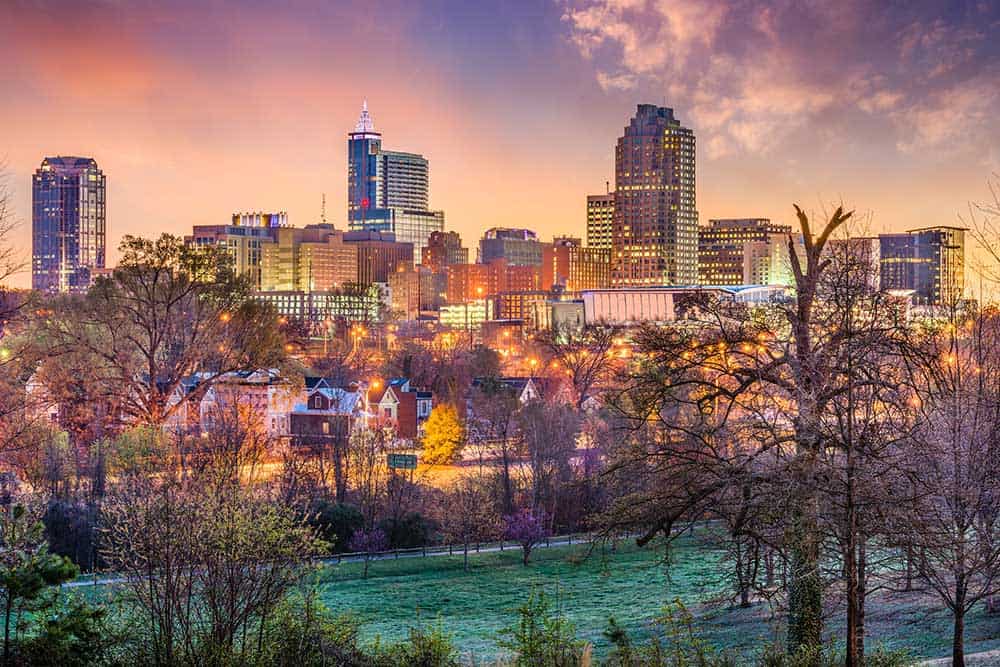 After you’ve explored the city’s main attractions in the heart of downtown, slink to the outskirts. The Raleigh area is peppered with incredible nature parks, greenways, and cycling & hiking trails.

On your Raleigh visit, don’t miss the 6,000-acre William B. Umstead State Park. Featuring 35 miles of hiking & biking trails, kayaking, and fishing, the state park is one of the best escapes from the urban core. It’s located just 15 minutes from the center of town.

Ready to plan your trip to Raleigh? Get started with these travel tips & resources!

Not to be confused with its Delaware namesake, Wilmington is one of the North Carolina coast’s best urban escapes. Like other Southeast USA coastal cities like Savannah and Charleston, Wilmington blends history with its waterfront charms. It’s a good place to catch a sea breeze for a day or two—especially if continuing up the Atlantic coast into the Northeast USA. 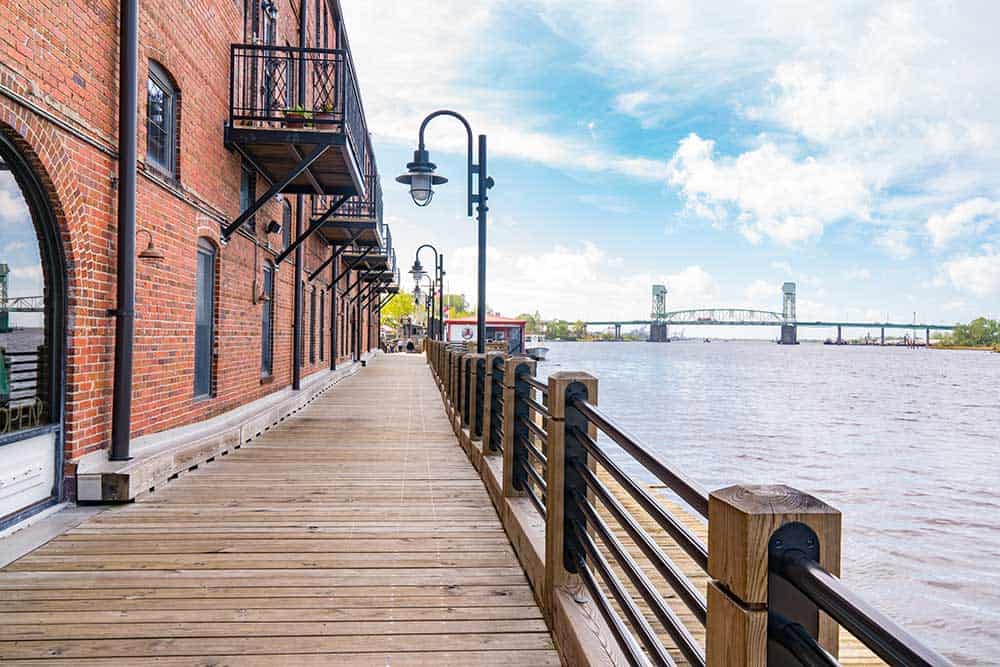 Wilmington is most known as a gateway to the nearby Cape Fear beaches. But there’s plenty to experience in the city itself. Take a stroll along the Riverwalk, running two miles along the banks of the Cape Fear River. Rest at one of its riverside cafes, restaurants, and bars to enjoy a great meal and cold drink to beautiful river views.

After exploring Wilmington’s Historic District, head east of town to explore the azalea-soaked Airlie Gardens. Or suck in Atlantic sea breezes along the Carolina Beach Boardwalk. The seaside boardwalk is one of the few remaining along the East Coast, and one of the USA’s best.

Ready to plan your trip to Wilmington? Get started with these travel tips & resources!

Driving the Blue Ridge Parkway northward to Shenandoah National Park? Rest your legs in the lively mountain town Boone. Named after American pioneer Daniel Boone, the town is famed for its bluegrass and Appalachian folklore. Next to Asheville, Boone is the most interesting town in Western North Carolina’s Blue Ridge Mountains. 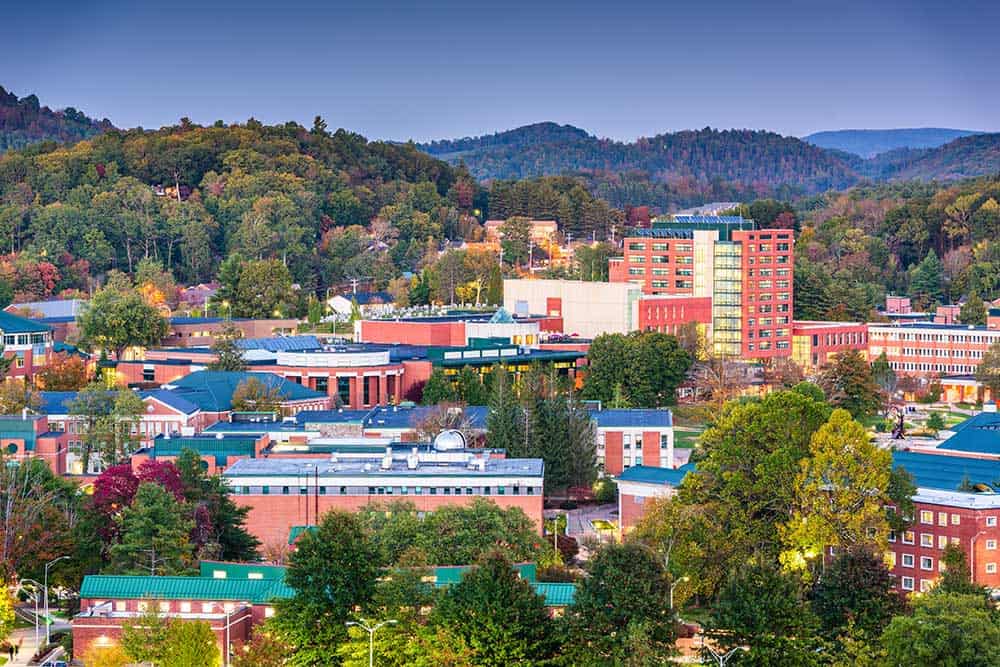 The heart of Downtown Boone beats around King Street. In the historic center, you’ll dazzle at handsome buildings ranging in styles from Colonial Revival to Art Deco. Roam around the downtown to experience Boone’s shopping & dining scene, catering to its large student population.

Besides its charming town center and surrounding nature escapes, Boone is famous for its “Horn in the West” performance. Running since 1952, the settler story takes place every summer in Daniel Boone Park.

Ready to plan your trip to Boone? Get started with these travel tips & resources!

While often visited as a day trip from Asheville, Black Mountain is worth a stop on its own on your North Carolina trip. Like its larger sibling 25 minutes west, Black Mountain boasts a charming downtown and a thriving arts & crafts scene. And from its perch, the mountain town has got plenty to get outdoor adventurers excited, too. 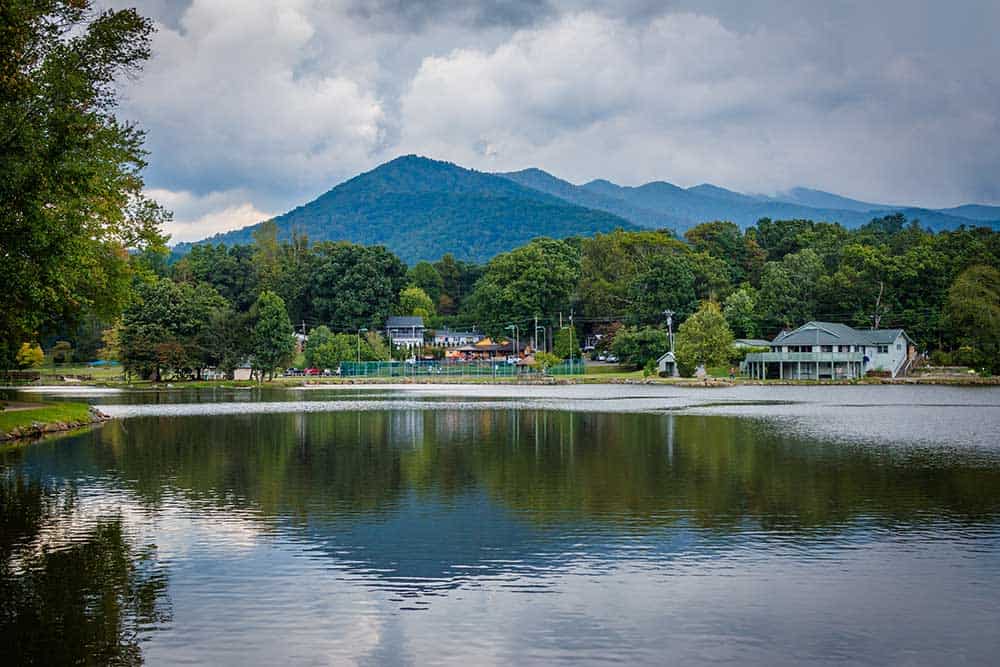 Urban explorers will love grazing through the town’s art galleries and boutique shops. Refresh yourself in between with cold beers at its craft breweries and a meal at its hip restaurants. The real treat of visiting Black Mountain, though, lies just beyond.

Venture to nearby Montreat to tackle the Greybeard Trail. Climbing 4.8 miles to the peak of Greybeard Mountain, the challenging trail ends with spectacular views over the Black Mountains.

Although part of Raleigh’s metro area, Durham is a superb North Carolina travel destination all to its own. The pleasant city of over 280,000 is most renowned as the home of Duke University and its famous Blue Devils. With its 17,000 students and 37,000 employees, the university’s transformed the city itself into a bastion of arts & culture. 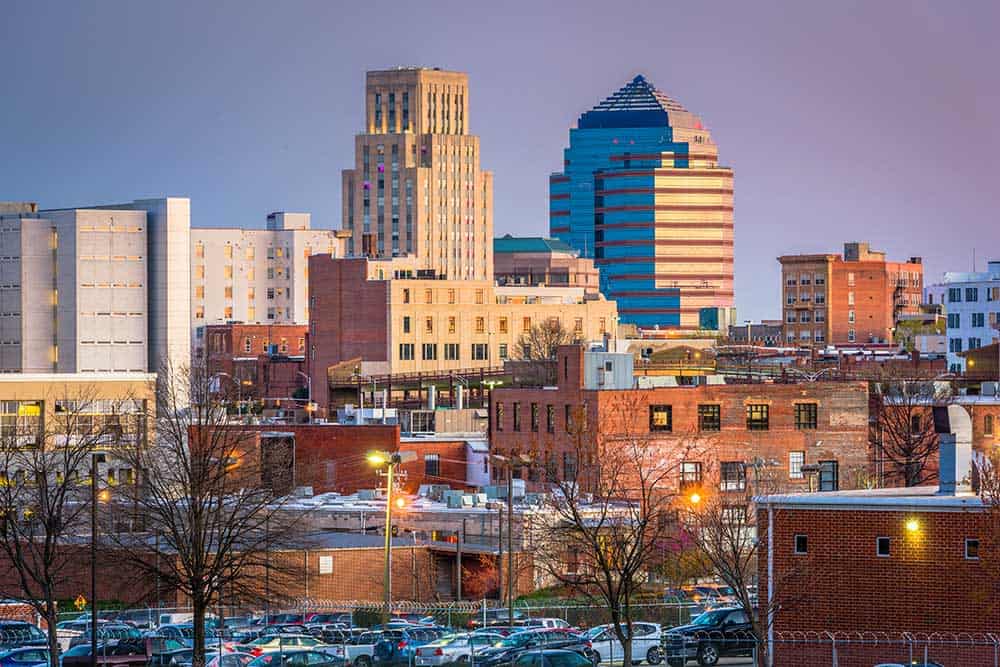 Throughout the city, you’ll also stumble upon cool art galleries, museums, and historical sites like the American Tobacco Historic District. In the former tobacco complex, old industrial buildings have been converted into trendy restaurants, bars, and theaters. Spend an evening enjoying the city’s coveted culinary scene here to get the full Durham experience.

Ready to plan your trip to Durham? Get started with these travel tips & resources!

Although it’s the state’s third-biggest city, Greensboro doesn’t land on trip itineraries as often as NC’s other main cities. Nonetheless, for both outdoor enthusiasts and history buffs, Greensboro has more than enough to keep you occupied for a few days. 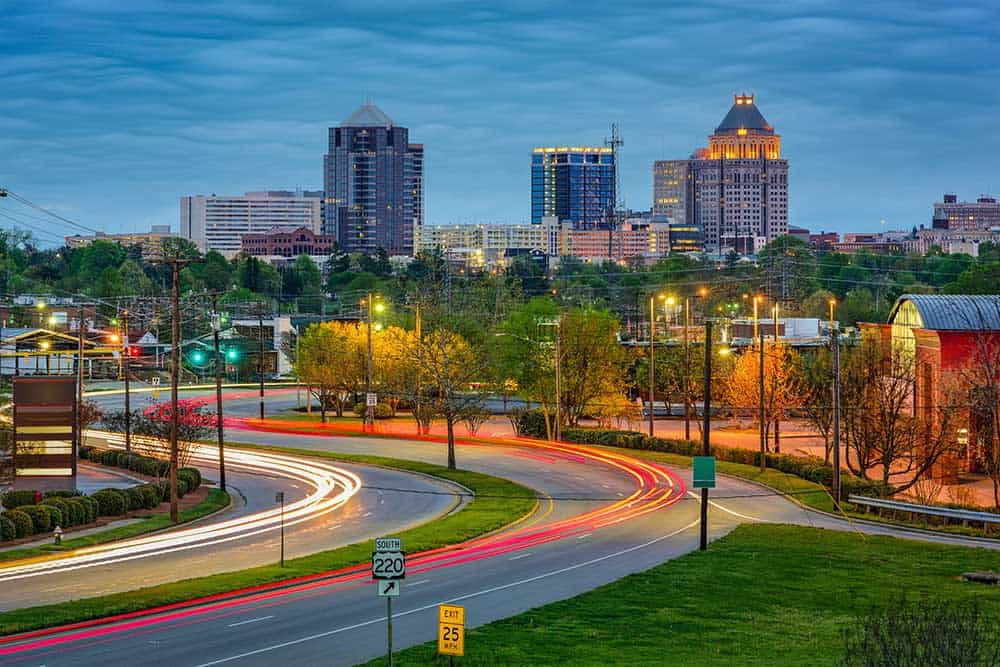 Greensboro is perhaps most well-known as a battleground during the American Revolution War. Military history devotees will love Guilford Courthouse National Military Park. The park hosts lively reenactments of the area’s most seminal battles.

If you’re into the outdoors, Greensboro is also a great base for exploring North Carolina’s wilderness. Greensboro anchors the Piedmont Triad region, wedged between the Blue Ridge Mountains and the Great Smoky Mountains.

Other travel destinations in North Carolina

When to visit North Carolina

Starting in March and April, North Carolina goes into full bloom. Throughout the state, you’ll dazzle at vibrant azaleas and dogwood blossoms. 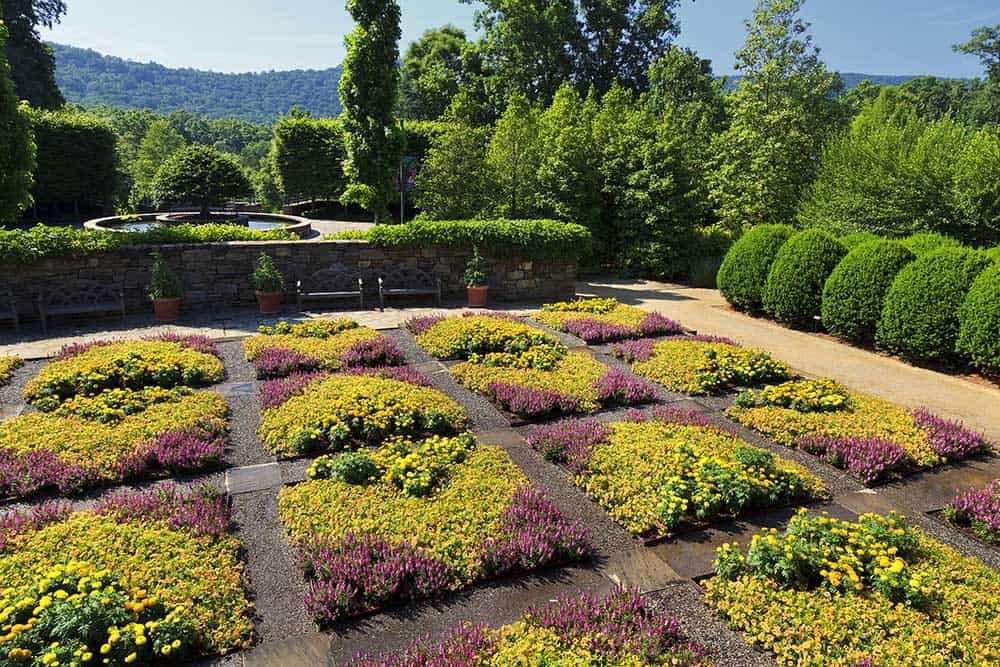 Late September and early October also bring a flurry of color to North Carolina. In fall, hit up the Blue Ridge Mountains to see the blazing autumn colors at their finest.

Summer is also a popular time to travel in North Carolina if a little crowded. In the interior, summer temperatures rise as high as the 90s. In the mountains and along the coast, it’s more tolerable with average temperatures in the high 70s.

How to get to North Carolina

North Carolina is home to four international airports and several smaller regional airports. The busiest airport in the state is Charlotte-Douglas International Airport (CLT), serving the Charlotte area. The airport is the second-biggest hub for American Airlines. It offers excellent connections to both U.S. and international destinations.