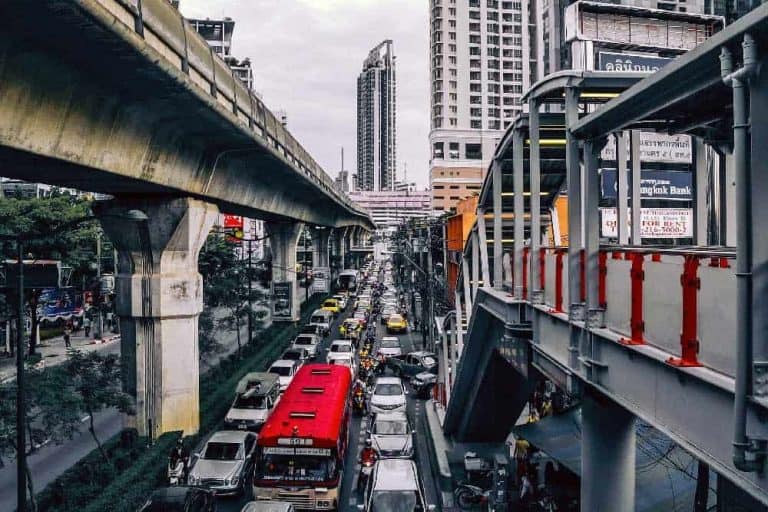 If you’re going to visit Thailand for the first time, you’ll likely spend at least one day in Bangkok, the eclectic capital city.

24 hours in Bangkok can overwhelm even the most seasoned traveller. As soon as you step out of the airport, you’ll find yourself bombarded with sights and sounds. Any Bangkok itinerary uncovers a city of contrasts where modern mega-malls loom steps from hundred-year-old village homes, Buddhist monks with smartphones wander the streets alongside tourists & locals, and tuk-tuks ply the streets as an alternative to the modern MRT rail system.

Visiting Bangkok in one day, you won’t see it all. In fact, you could spend weeks exploring Bangkok’s narrow alleys and floating markets and still need to come back to see more.

Don’t know where to begin? Plan your trip before you go with this complete 1-day Bangkok itinerary…

What to do in Bangkok in 24 hours: A complete 1-day itinerary

As with most of our city travel plans, this Bangkok itinerary allows you to experience the best that the city has to offer but not everything.

If you have the chance, come back for a longer trip. The popular floating markets and a few of the temples are too far away for a day trip to Bangkok. 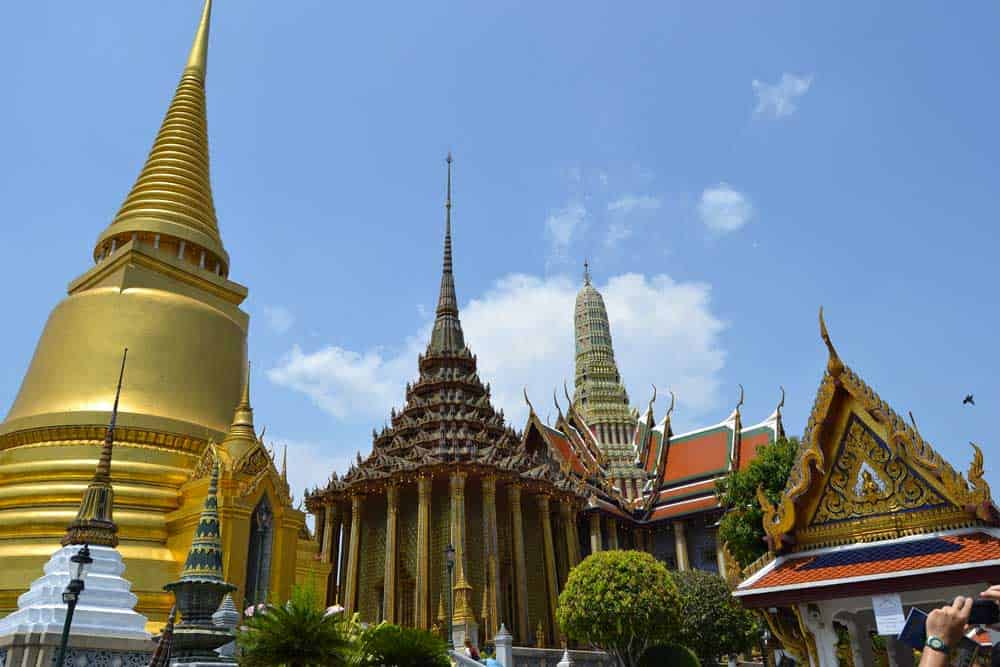 For your 24-hour Bangkok adventure, you’ll spend the day exploring the central part of the city. You’ll visit historic sites and crowded open-air markets while stopping to taste the local flavours.

If possible, start at the crack of dawn. You’ll need every available minute to explore Bangkok on foot.

Shop for almost anything and grab breakfast on Khao San Road

Khao San Road is a short street crammed with restaurants, bars, and shops. It’s one of the busiest spots in Bangkok, especially in the evening.

Luckily, you’ll get to walk the street in the morning before it becomes impossible to navigate.

Due to the popularity of the street, vendors have flocked to the area, offering tourists a wide range of local goods. You can find books, trinkets, and clothing but the real reason to visit early during your one day in Bangkok is the food. 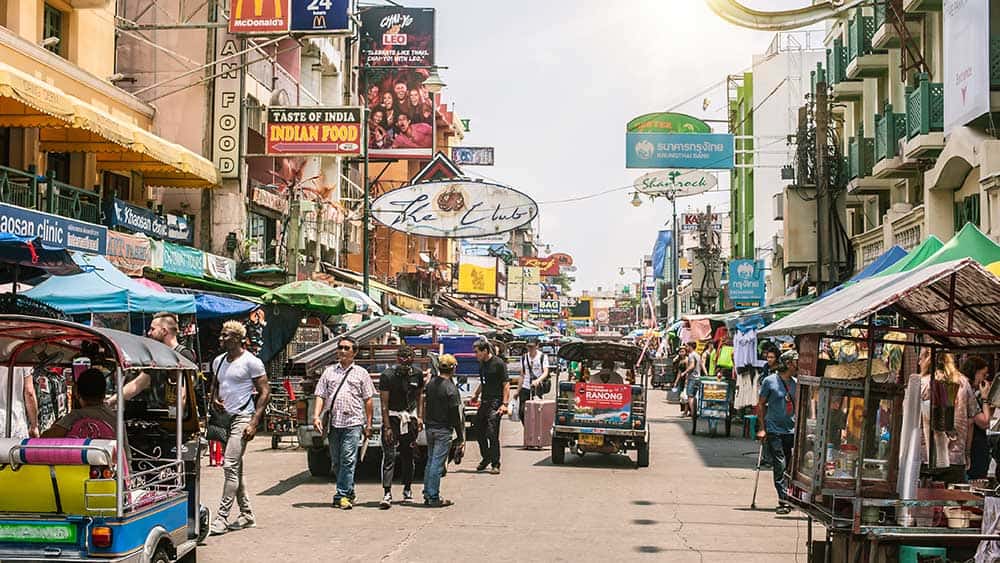 Try Pad Thai. It’s a stir-fried rice dish with noodles, often available from at least a few vendors on Khao San Road. You could also start your day with a fresh breakfast baguette if you prefer a lighter meal.

As you finish your meal and clean your fingers, check out some of the handicrafts at the small shops. Besides clothes or books, you can shop for bootleg CDs and DVDs, local produce, and even fake IDs. It’s got a little bit of everything.

You may want to visit soon. The local government wants to clean up the street and has threatened to shut down the street vendors. For now, however, you’ll find over 300 small shops and vendors crowding the 400-metre street.

When you get to the end of Khao San Road, it’s time to continue your one day in Bangkok with a visit the Grand Palace. Head south toward Phan Phiphop Lila Junction. It’s one of the busiest intersections and you may not want to cross it on foot. 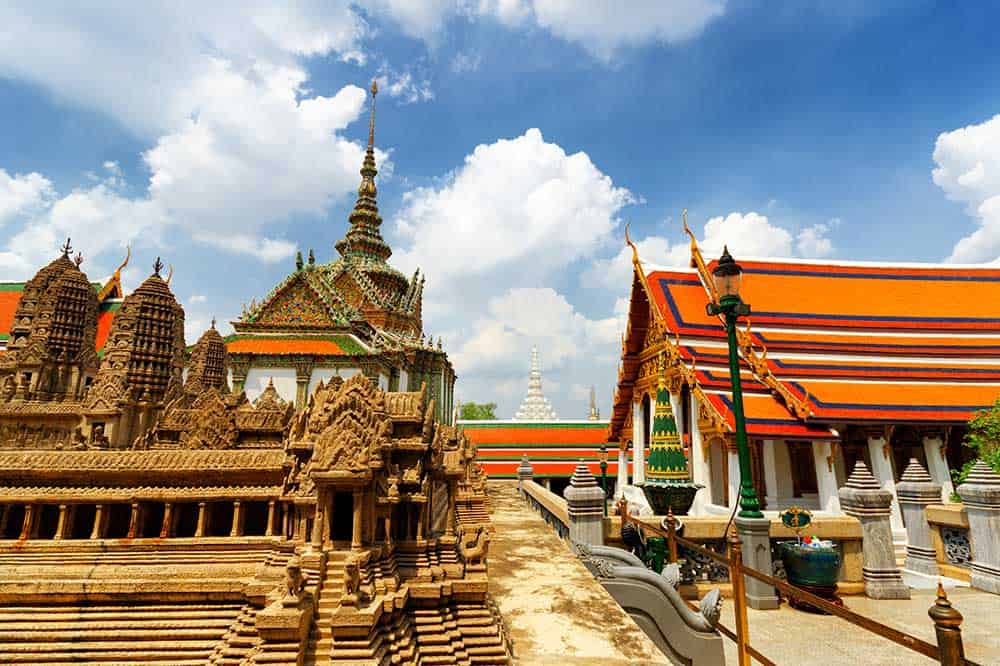 Another option is to ride a tuk-tuk to the Grand Palace. The trip will only take a few minutes and you can stare out at the sites as your driver zips past vehicles and pedestrians.

If you decide to walk, the trip goes quickly after the junction. You just take the main road south and you’ll see the top of the decadent palace in the distance.

The massive complex of buildings was the official residence for the kings of Siam and Thailand. It’s now a major tourist trap, attracting millions each year.

Remember that the palace adheres to a strict dress code, so short shorts or tank tops on men and women alike are a no-no.

If possible, find a map of the complex before you arrive. There are dozens of buildings, gardens, and courtyards, all worth exploring.

As a precaution, avoid saying anything disparaging about the Thai royal family during your tour of the palace. While the royal family no longer holds court in the palace, it’s against the law to disrespect the royals.

After a walk around the palace, you’ll get to explore another one of the most iconic sites in Bangkok. Wat Pho is just a block south of the Grand Palace. 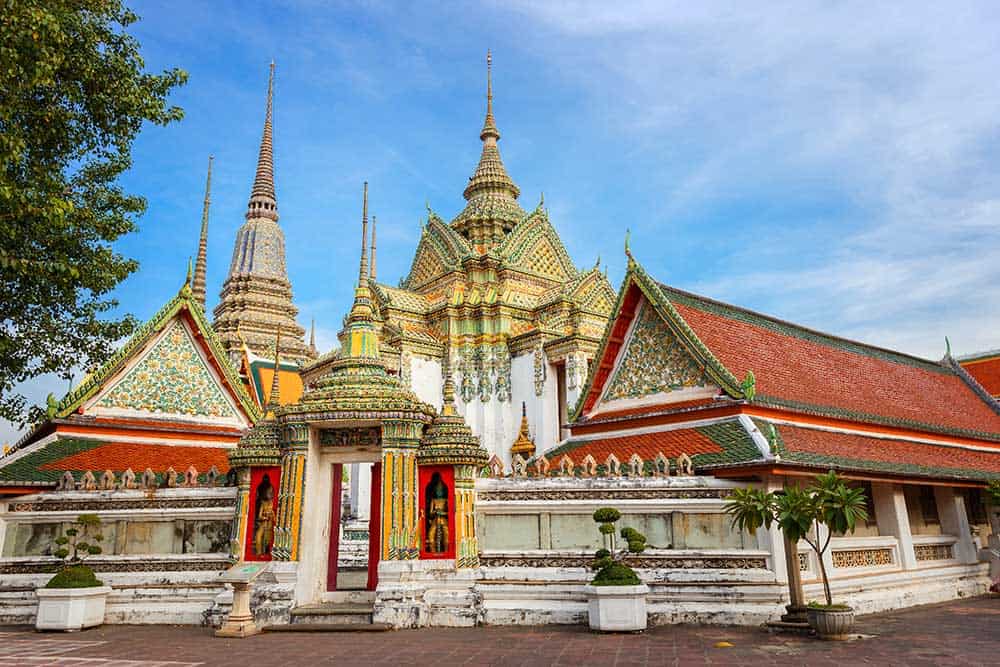 Any Thailand itinerary should include stops at a few of the most notable temples. The country is known for its numerous gilded wats (temples). In certain parts of Bangkok, you’ll find a temple around almost every corner.

With just 24 hours in Bangkok, you don’t have time to see them all so see Wat Pho. It’s considered a “royal temple” and it’s easy to see why. It’s one of the largest wats in Bangkok, covering over 80,000 square metres.

The interior features one of the biggest main halls. At the end of the hall sits a large gold and crystal three-tiered pedestal resembling an enormous throne with a gilded Buddha.

The imposing structure is just one highlight of the temple. As you walk around, you’ll come across life-size statues of Chinese guards and Buddhas.

The one drawback is the size of the crowds. As one of the most popular temples in a city known for its temples, Wat Pho gets packed. You’ll almost feel as if you’re moving along a conveyor belt as you’re rushed from one room to the next.

Continuing south from the temple, you’ll reach Museum Siam. It’s only a couple of blocks away. 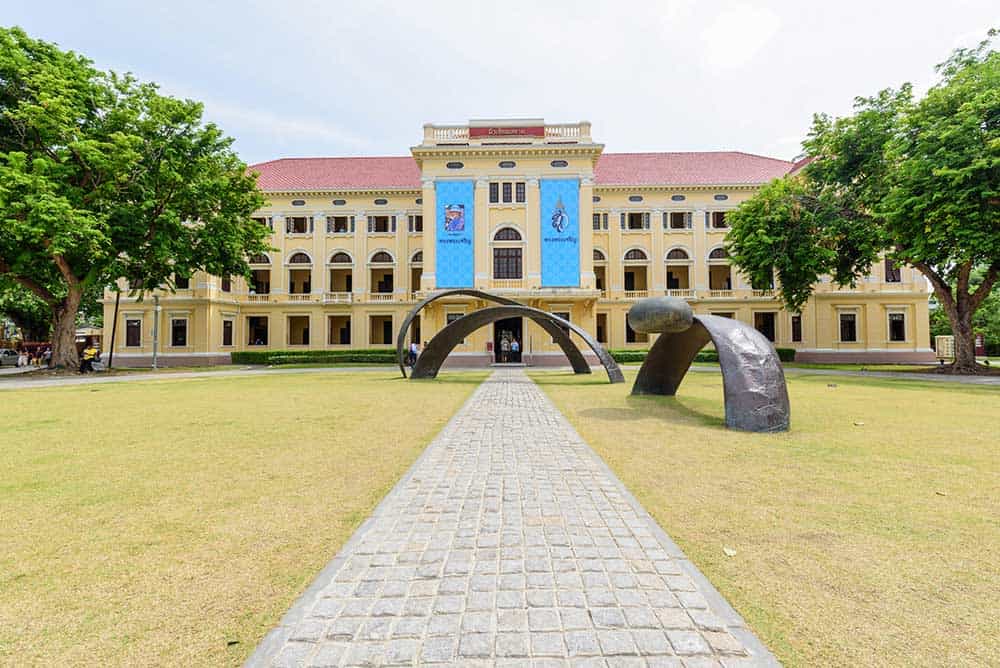 Visiting a museum doesn’t fit on everyone’s agenda, especially if you’re only in Bangkok for one day. Museum Siam, however, deserves a spot in your itinerary due to its interactive exhibits.

With a tour of the museum, you get a quick recap of Thai history from prehistoric times to modern times. While most of the exhibits feature games and interactive elements for kids, you’ll still have fun learning about the various Siamese kingdoms that ruled the region.

Instead of walking with a tour group, use the audio guide. You can go at your own pace and leave early if you start running out of time.

When you walk out the doors of the museum, you’ll need to start walking east into the heart of the city. Every block that you trek will take you past at least one shopping mall, market, or plaza until you eventually reach the Old Siam Shopping Plaza. 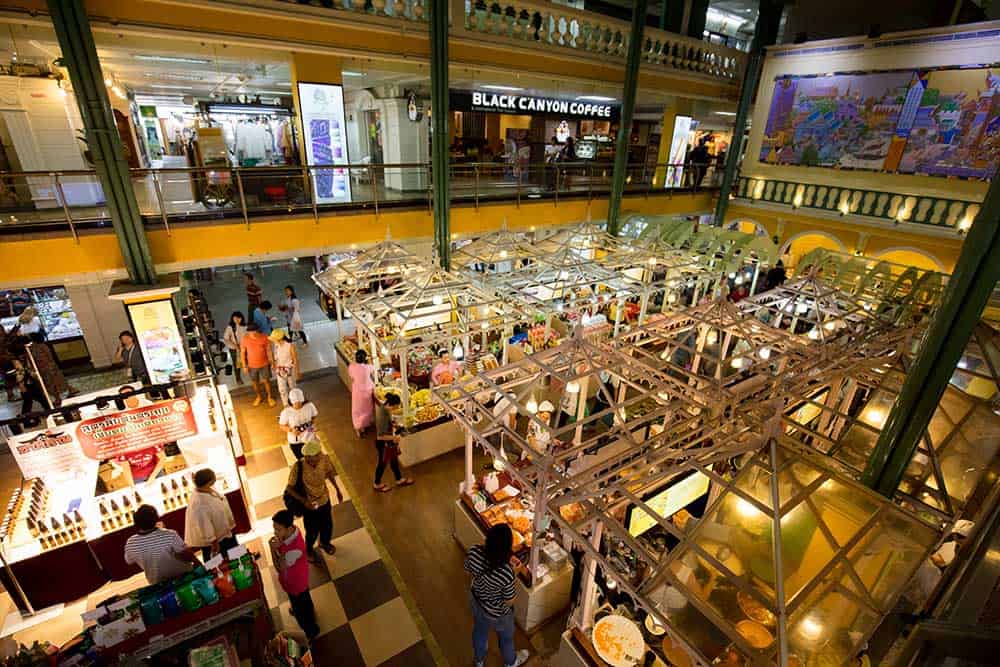 Despite the name, this shopping plaza isn’t that old. It’s a modern shopping mall with four floors and dozens of shops. The ground floor contains mostly gun shops but the upper floors include a food court and various clothing retailers.

You can shop for traditional Thai period costumes and then indulge your taste buds with various Thai desserts. If you visit the food court, you’ll likely get to watch elderly citizens gather for karaoke, something that you don’t want to miss.

Walk the maze of streets that make up Bangkok’s Chinatown

After exploring the shops in the plaza, it’s time to continue your 24-hour Bangkok itinerary by checking out the shops in Chinatown. Follow Phahurat Road east until you reach the distinct Chinatown neighbourhood. 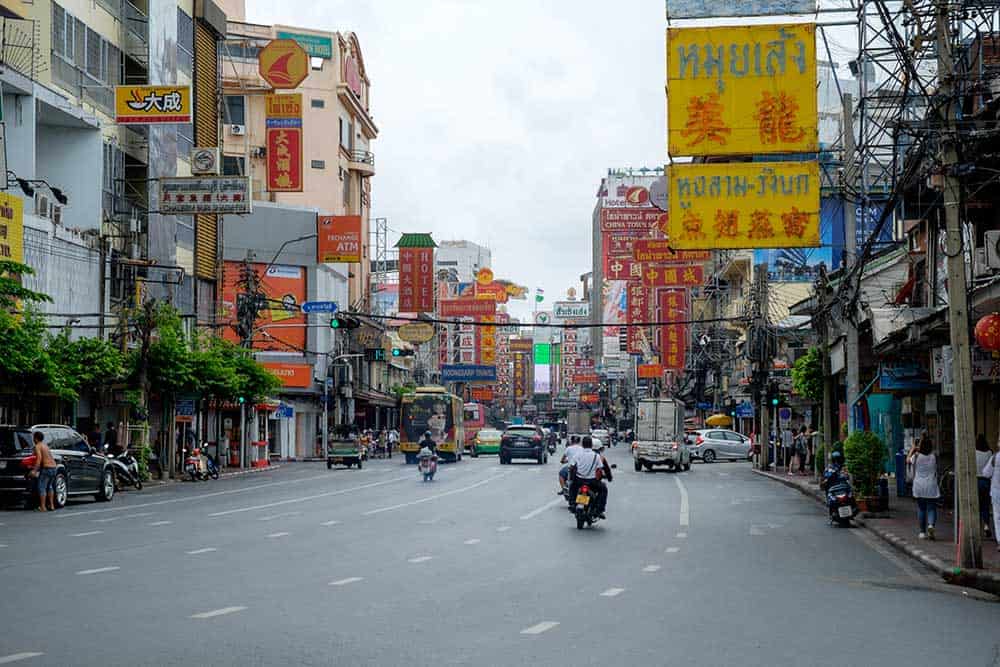 With an endless list of things to do in Bangkok, visiting Chinatown may not make the cut for most tourists. That’s their loss. Bangkok’s Chinatown is one of the largest and most interesting Chinatowns in the world.

Most of Bangkok’s Chinatown is on Yaowarat Road, a block north of Phahurat Road, but the area spreads out and covers some of the surrounding streets. It’s also one of the oldest areas in the city and the main centre of trade.

It’s known for its food. In the evening, tourists and locals flock to Chinatown for the Thai Chinese cuisine. You’ll also find vendors selling garments, gold, second-hand parts, antiques, souvenirs, and just about anything else that you can think of.

By the time you work your way through Chinatown, it’s going to be late but you may still have time to end your Bangkok itinerary with a ride on a dinner boat.

Along the banks of the river, just a couple of blocks from Chinatown, you’ll find a few restaurants with their own river tours. Some of these establishments have evening rides with dinner and drinks. 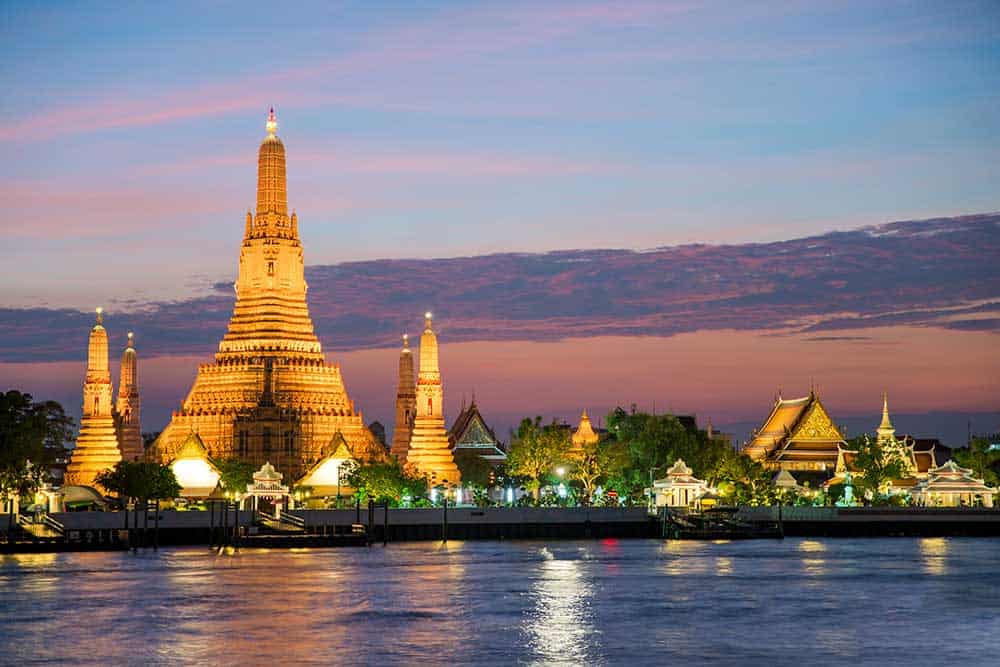 Enjoy your meal as you travel past riverside temples, markets, and churches. Most of the dinner cruises take about an hour but some take more.

No matter if you choose the one-hour or two-hour ride, consider purchasing your tickets ahead of time. The seats fill quickly, especially during peak tourist seasons, which is almost every week in Bangkok.

Travelling around Bangkok in 24 hours isn’t easy. If you don’t reach the boat tour in time, you could simply walk the riverside looking for a restaurant or bar to close out your trip.

Establishments line both sides of the river and the area becomes incredibly loud and vibrant at night. Take in the tastes of local Thai cuisine and cold beverages whether you’re riding down the river or sitting outside of a riverside restaurant.

Where to stay: The best hotels for 24 hours in Bangkok

Like in most cities of its size, figuring out where to stay in Bangkok is hardly the easiest part of planning out your itinerary. Most travellers would do well to narrow their search down to the areas around Khao San Road, Silom, and Sukhumvit which feature the high concentrations of high-quality accommodations.

Beyond Bangkok in one day: More Thailand & Southeast Asia itineraries