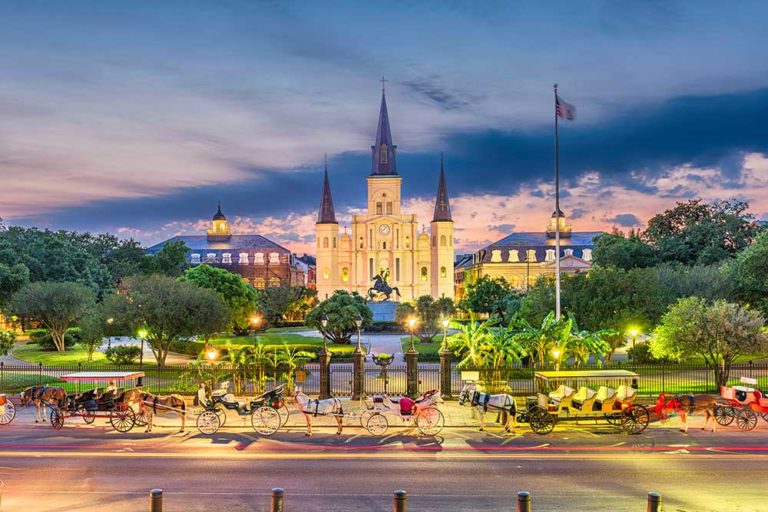 No visit to the Deep South is complete without at least one day in New Orleans. Famous for its annual Mardi Gras celebrations, New Orleans is one of the most-visited travel destinations in the USA.

The biggest city in the state of Louisiana, New Orleans boasts over 300 years of history. Of course, with 24 hours in New Orleans, you can’t experience it all. But that doesn’t mean you won’t get a good taste of NOLA on a quick layover.

On this 1-day New Orleans itinerary, you’ll roam around the vibrant French Quarter. You’ll admire its characteristic architecture, sliding into cafés and boutiques along the way. Your tastebuds will delight in the city’s unique Creole and Cajun cuisine. And you’ll sip cocktails on Bourbon Street or listen to jazz bands on Frenchmen Street.

Don’t know where to go in New Orleans in one day? Get started with this complete 24-hour New Orleans trip plan.

Looking for more ideas for your trip? Check out our other city itineraries and our Louisiana Travel Guide for more recommendations on when to visit, where to go & what to do!

Where to go in New Orleans in one day: A complete 1-day itinerary

Set your alarm for an early(-ish) wake-up. Start your one day in New Orleans with a quick breakfast at the Cafe du Monde. Dating back to 1862, the historic café is famous for its chicory coffee and beignets. 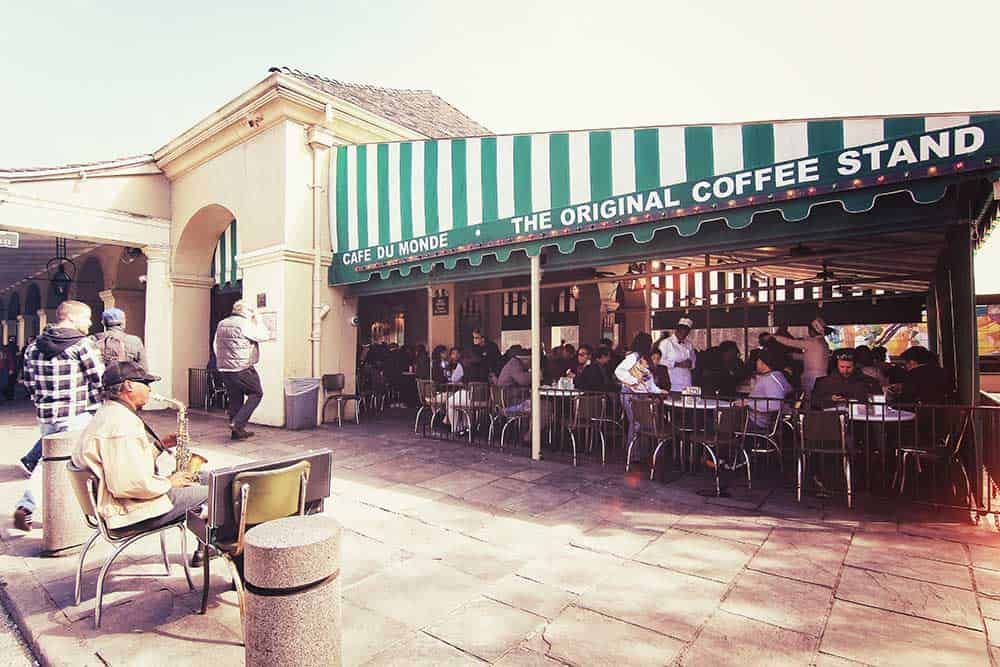 If the beignets seem a little too sweet & heavy for breakfast, just grab a coffee to go. Plenty of other delicious eating opportunities await nearby.

This traditional coffee shop opens at 8am. With its insane popularity, you’ll want to be among the first in the line at this breakfast spot.

The heart of New Orleans’s French Quarter beats at Jackson Square. The famous square dates back to 1721, just a few years after the city’s founding. Throughout the day, Jackson Square attracts a variety of artists, musicians, and street performers. 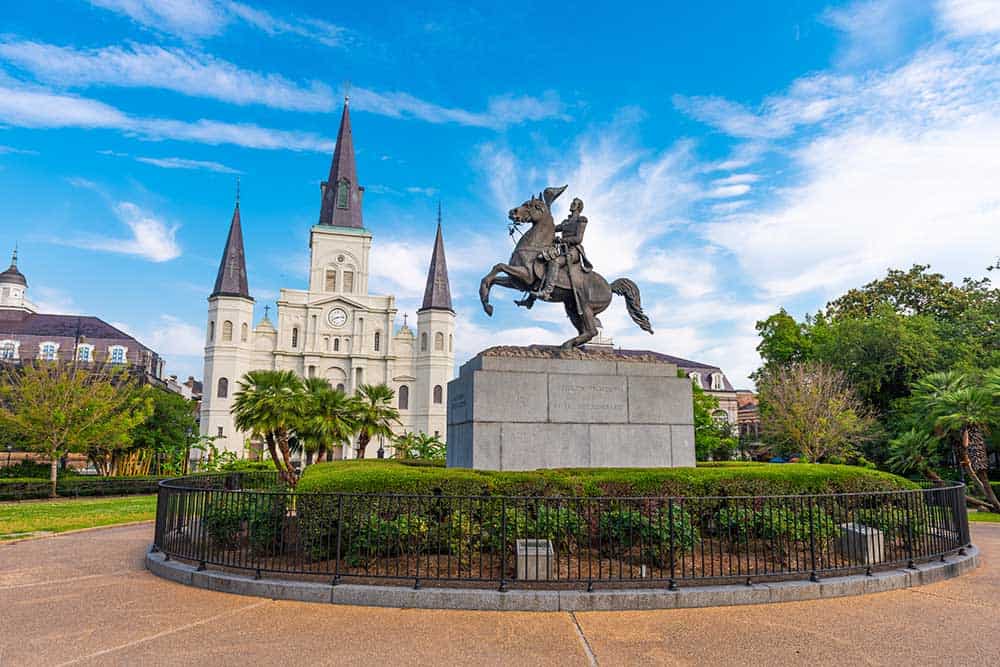 Architecture buffs should take time to sneak a peek of the cathedral’s interior. Marvel at its Rococo-style gilded altar, stained glass windows, and magnificent religious artwork.

Shop along Decatur Street and in the French Market

Exit Jackson Square to the southeast. You’ll land on Decatur Street. The waterfront avenue is one of the French Quarter’s most important historic commercial thoroughfares. Decatur Street is loaded with souvenir shops, boutiques, cafés, and some of the finest restaurants in New Orleans. The street is often listed among the best places to go in New Orleans for travelers. 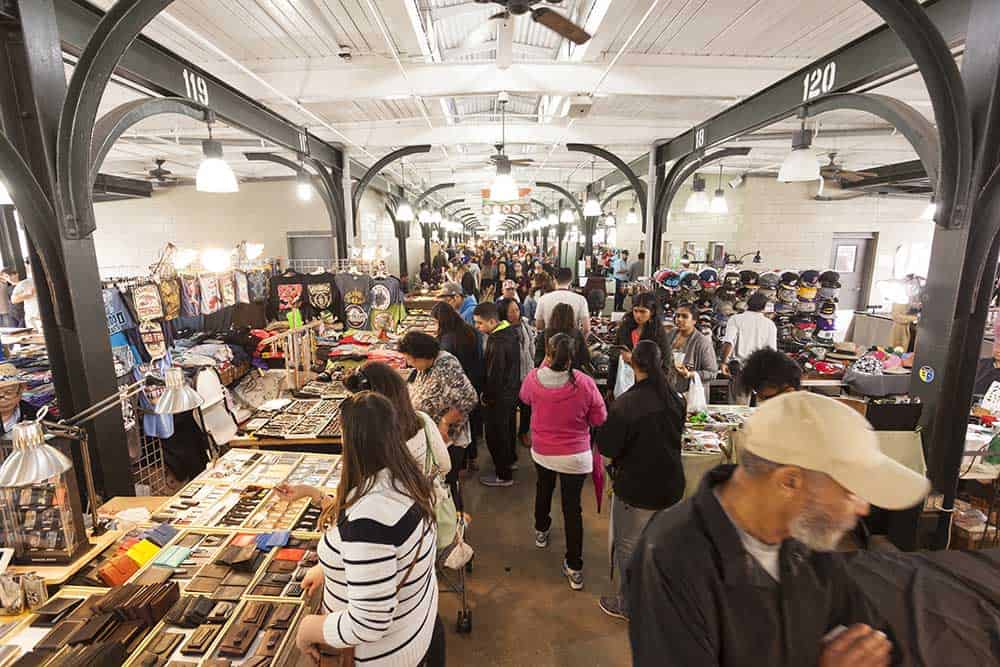 Running between Cafe du Monde and Esplanade Street, Decatur Street is the centerpiece of NOLA’s French Market. The stretch has changed much over the decades. Still, the historic five-block market comprises some of the city’s most interesting places to shop & eat.

For a sense of the original market’s diversity, check out the Shops of the Colonnade. The covered shopping alley is a fantastic place to pick up local handicrafts, souvenirs, or a quick snack.

The best way to experience the French Quarter is to simply wander. Start your exploration on Royal Street, two blocks northwest of the French Market. Royal Street is the perfect counterweight the wild streak of Bourbon Street, one block over.

It’s chock-loaded with some of the quarter’s finest colonial architecture. It’s a great place to catch a glimpse of the city’s characteristic wrought-iron balconies. (With more elbow room.) 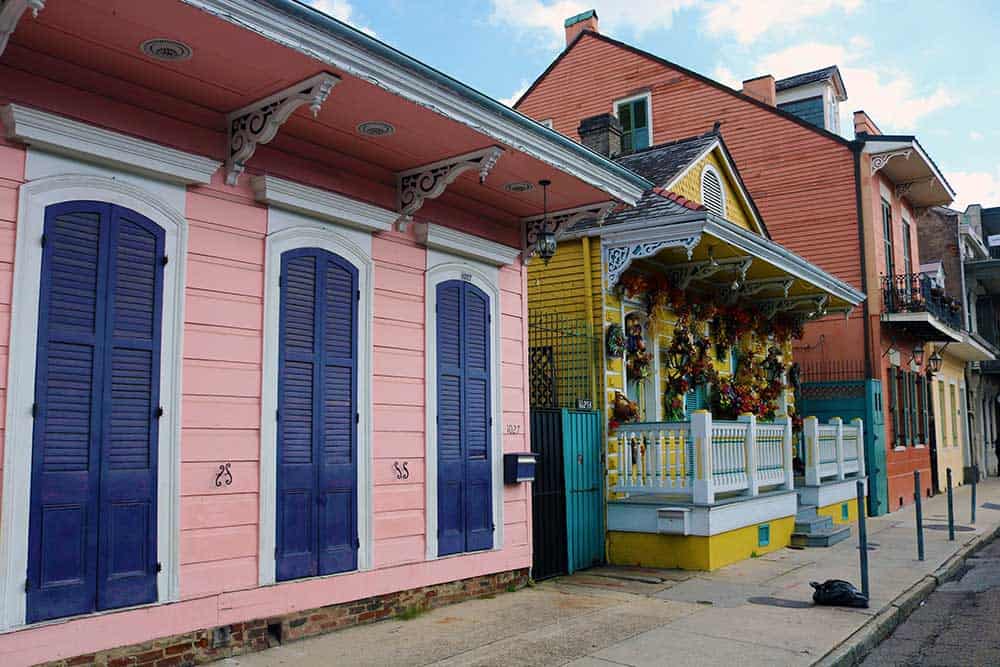 Built up an appetite? Grab lunch at Johnny’s Po-Boys on St. Louis Street. Operating since 1950, this popular joint serves up Creole dishes and some of NOLA’s finest po’boys. One of Louisiana’s signature dishes, po’boys toss meat or fried seafood into a soft French bread roll. (If it sounds yummy, it’s because it is!)

PRO TIP: Experience the best of the city on a New Orleans French Quarter Walking Tour. This popular walking tour takes in all the highlight of NOLA’s most interesting neighborhood.

Shop along Magazine Street in the Garden District

After wandering around the French Quarter, drop down to Magazine Street. The famous avenue runs six miles between Canal Street and Audubon Park.

From the start of Magazine Street, it’s a 45-minute walk or 15-minute ride to the heart of Garden District. Next to Vieux Carré, Garden District is the central neighborhood most worth exploring on a tour of New Orleans in one day. 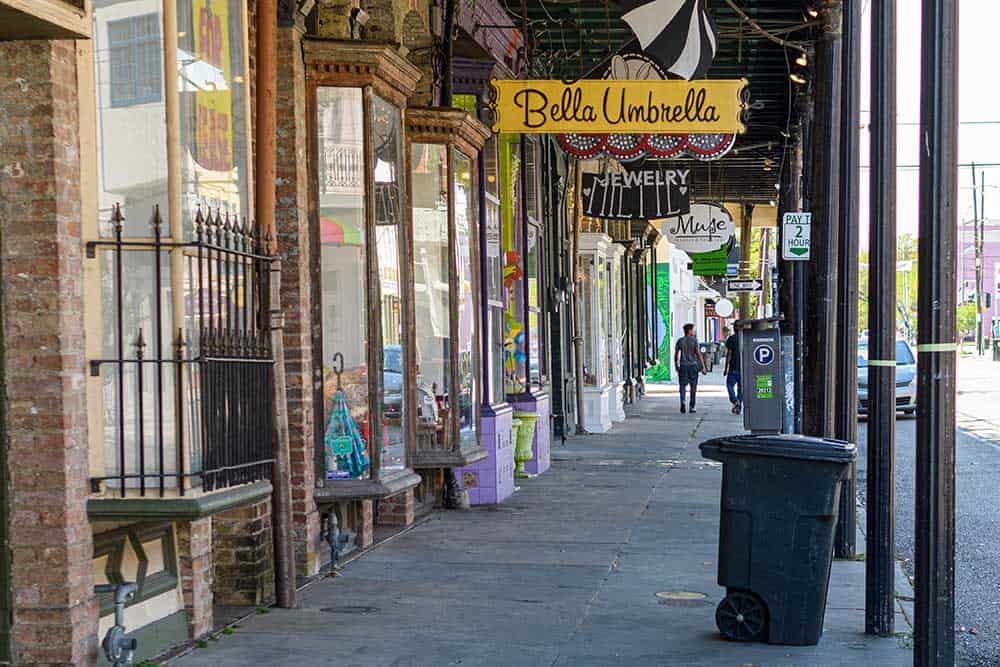 Magazine Street is lined with a slew of boutiques, antique shops, cafés, and restaurants. Many of the avenue’s most memorable moments fall within the Garden District. Spend some time perusing the gift shops, ducking into its cool cafes for refreshments. 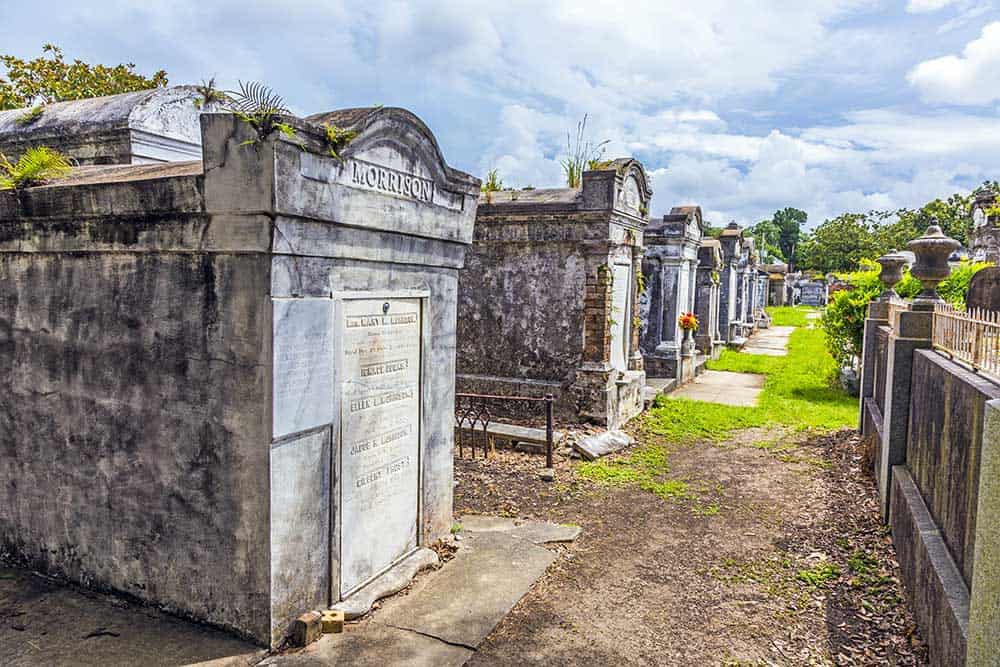 For its spectacular historic architecture, the cemetery is worth a gander. (NOTE: The cemetery has been closed for renovations since 2019. At the time of writing, re-opening dates are unknown.)

With a romp in the Garden District under your belt, snag a ride back to the French Quarter. Beeline back to Royal Street for a meal at Cafe Amelie. Located in a 150-year-old courtyard, the elegant Cafe Amelie serves delicious Louisianan fare.

For a true taste of NOLA, try their chicken & andouille sausage gumbo and shrimp & grits.

Looking for other restaurant options during your tour of New Orleans in 24 hours? Venture elsewhere in the French Quarter. You’ll have no problem finding something to suit any taste.

Experience the nightlife of Bourbon Street or Frenchmen Street

If there’s one thing New Orleans is famous for it’s nightlife. And no place in NOLA is more renowned for its hard-partying ways than Bourbon Street. Whether you love or hate it, there’s no escaping it: Bourbon Street is a must-see while visiting the Big Easy.

In the evening, Bourbon Street can get, well, a tad wild. Even if you decide not to spend your evening drinking out of to-go cups along the strip, it’s worth a walk at night. 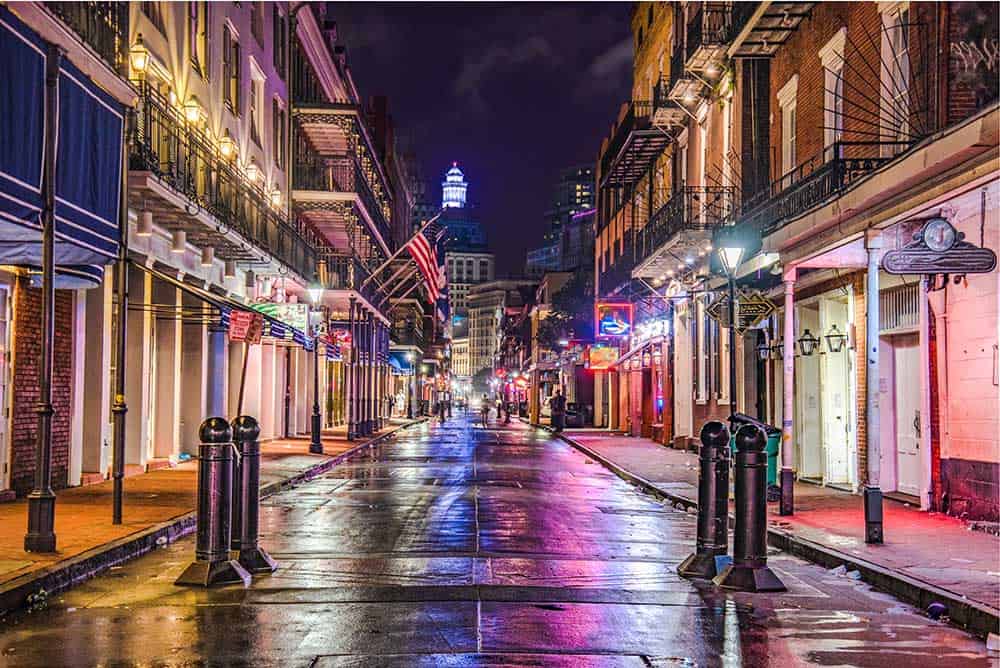 For New Orleans nightlife at a slower pace, escape the Vieux Carré tourist bubble for Frenchmen Street. This popular stretch of road in the Marigny is famous for its jazz clubs and live music venues.

Where to stay with 24 hours in New Orleans

For a quick layover, the best areas to stay in New Orleans are in & around the French Quarter. Most of the city’s best hotels sit within or just outside this historical district. 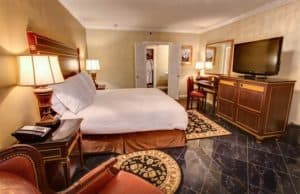 Let the city’s French charms come to life with a night at this beautiful hotel. You’ll love hanging out in the hotel’s private courtyard and at the two on-site wine & cocktail lounges. 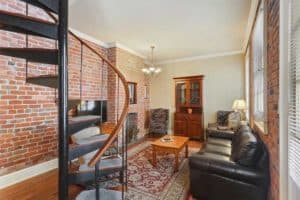 Occupying a graceful 19th-century townhouse, this hotel exudes old-world elegance. The suites are fully equipped for a self-catering stay in NOLA. 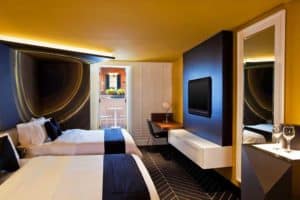 Located in the center of the historic district, this hotel is one of the city’s top luxury hotels. Take a dip in the stunning outdoor pool for a strong dose of relaxation. 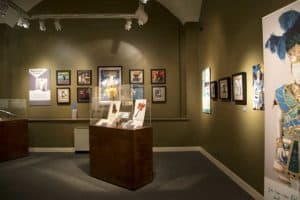 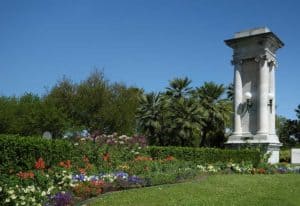 Need to escape the chaos of NOLA? Venture north to City Park. At three miles long and one mile wide, the park is the city’s finest greenspace. City Park is also home to the New Orleans Art Museum. 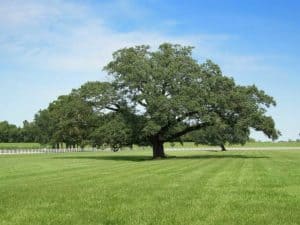 Got extra time in the city? Escape with a ride out to the Oak Alley Plantation. This National Historic site is one of the best New Orleans day trips. Hop onto one of its guided plantation tours to learn more about its history.

When to visit New Orleans

The best time to visit New Orleans is between February and May. In the spring months, New Orleans is at its most comfortable. Temperatures are warm to mild, and the flowers and foliage are in full bloom. February to May also offers some of the driest conditions of the year. 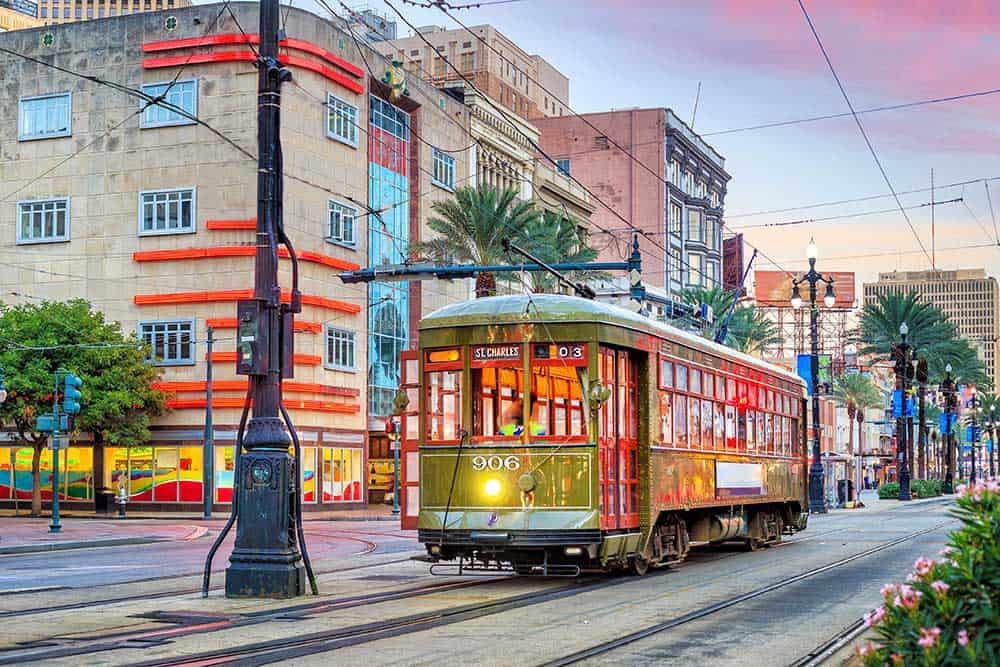 During February and March, the city’s world-famous Mardi Gras celebrations take place. If attending Mardi Gras is on your bucket list, be sure to book your rooms well ahead. (Expect to pay higher prices.)

Like other Gulf Coast destinations, hurricane season in New Orleans falls between June and November. The summer months of July and August are a particularly unoptimal time to visit. The weather in NOLA in summer is often uncomfortably hot & muggy.

How to get to New Orleans

New Orleans is well-connected by road to other destinations in the Southern USA. Popular routes and estimated driving times include: