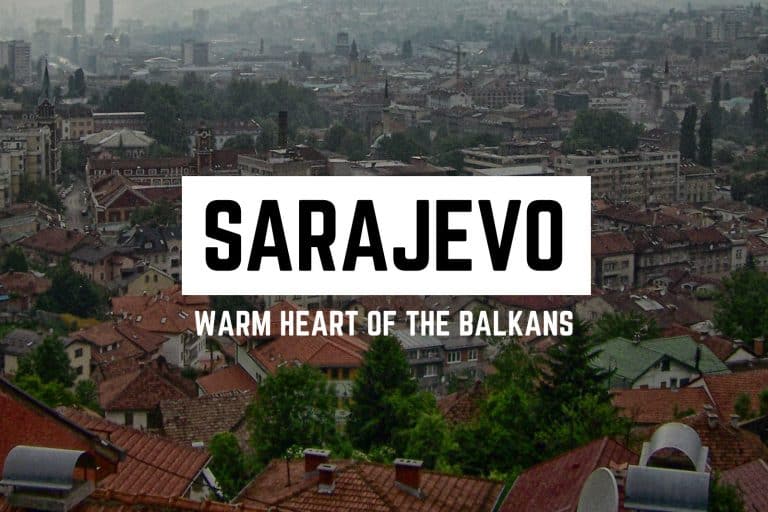 Almost seven years have past since my jaunt through the Balkan Peninsula, and with memories slowly fading, I’m now scrambling to jot down every sentiment before it all slips away. Somehow, I’m not entirely convinced that my brain will ever fully purge itself of the journey.

Even as I push forward as a traveller, extending my comfort zone beyond what was once thought possible, I constantly reminisce about my time in the Balkans. And not for typical reasons.

Every place I visited then captivated me in a different way. But no city, before or after, impressed upon me more than Sarajevo, the unassuming capital of Bosnia & Herzegovina.

It wasn’t that Sarajevo was the most beautiful or action-packed destination I’d ever encountered. That would be too easy.

Something about Sarajevo instantly appealed to me, and I could never quite put my finger on it until now: Sarajevo didn’t show me its full hand. The main reason I can’t shake the city is that it never fully revealed itself to me.

Unlike Prague, Istanbul or Krakow, Sarajevo’s charms don’t immediately slap you in face. But when approached slowly, they aren’t hard to coax out. Delve deeper into Sarajevo and I promise you: it won’t take long to fall prey to its magnetism.

Famous for all the wrong reasons, Sarajevo is, for many travellers, hardly a dream destination. But fast forward and ignore all the bad press – Sarajevo has now become a dramatic symbol of a nation and people surging forward from a crippling civil war that tore the fabric of the country to shreds some two decades ago. Besieged from April 1992 to the end of February 1995, Sarajevo has, despite all odds, rebuilt itself into one of Eastern Europe’s liveliest modern capitals with plenty to keep you busy for a few days. 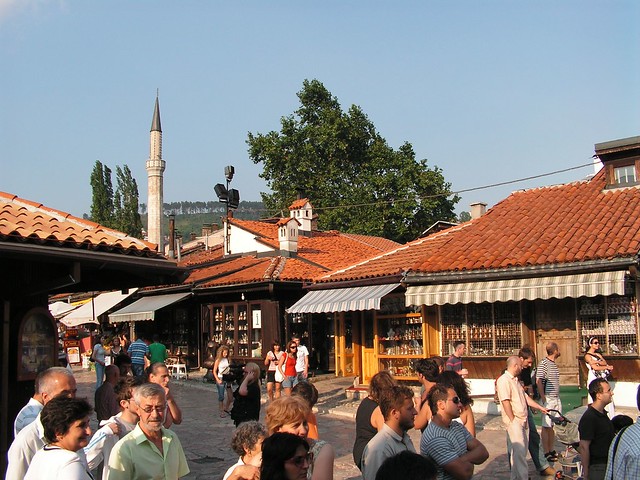 Haggling In the Footsteps of the Ottomans

At its ancient core, Baščaršija, Sarajevo pulses, showcasing its multifaceted character. Built in the 15th century by the Ottomans, the tongue-twisting Baščaršija and its eccentric bazaar still retains its original Turkish flavour – quite literally in fact. Shops selling nearly anything imaginable and restaurants serving up Bosnian fare, heavily influenced by its former Austro-Hungarian and Ottoman occupiers, grace the cobblestoned streets emanating from the Sebilj, a fountain seemingly more suited for Istanbul than Central Europe.

Plying the narrow alleyways in Baščaršija you’ll find wares of every variety: copper pots, Turkish instruments, clothing, cheap souvenirs and even war relics – if that happens to be your thing. Arm yourself with a few Bosnian phrases: Baščaršija is one of the best places west of Istanbul to test out your haggling skills.

Besides getting that bağlama you’ve always wanted, bargaining is a great way to engage the locals, who are not afraid to open up and give insight into their beloved city.

Forget relying only on the immensely popular “Sarajevo Survival Guide”, written during the Bosnian War, to draw insight about the city’s recent past. Fiercely proud and resilient, Sarajevans are, themselves, never short on inspirational stories.

Most of the time, you don’t even need to ask. It’s nearly impossible to spend a few days in Sarajevo and not encounter someone with a firsthand tale of the devastating siege. And this is one of Sarajevo’s most compelling quirks: visiting the city has a rare ability to change one’s perspective on their life. After chatting with a few Sarajevans, complaining about minor inconveniences in your life seems mundane. Sarajevo can be a turning point, not just a mere travel destination. 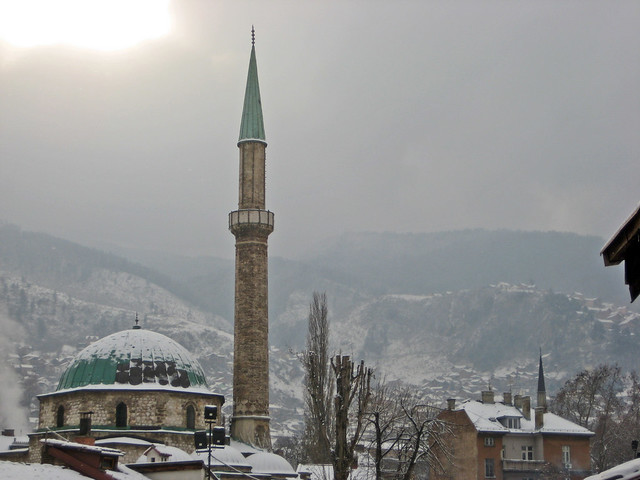 The “Jerusalem of Europe”

Walking about Baščaršija, it’s easy to see why Sarajevo was once called the Jerusalem of Europe. An ancient crossroads of east and west, religious tolerance reigns in Sarajevo, and throughout the city, mosques and madrasas blend seamlessly with cathedrals and synagogues.

The old town in and around Baščaršija is a common haunt for the devout. The imposing 16th century Baščaršija Mosque, one of the focal points of the bazaar district, is an impressive specimen of Ottoman architecture with its characteristic domes and piercing minarets. To the west of Sebilj, stands one of central Sarajevo’s other most impressive mosques, the Gazi-Husrevbey Mosque, built just two years after the Baščaršija Mosque in similar style. Outside of religious holidays and worship times, both mosques are accessible to visitors.

Escaping persecution in Spain, many Sephardic Jews settled on Ottoman territory including throughout Bosnia. The old Jewish quarter of Sarajevo, north of Ferhadija, was once a bustling place, home to about 12,000 Jews who thrived under the Ottomans. Today little is left of the old quarter, and the community it once played host to, with the exception of the New Temple Gallery, a compelling museum of Jewish history, and the Old Temple Synagogue.

Although Islamic influences are the most palpable in Sarajevo, there are a number of Orthodox and Catholic cathedrals and churches also worth exploring. The old Orthodox Church in Baščaršija, with its museum of Greek, Russian and Bosnian artifacts, and Byzantine-style Orthodox Cathedral at Trg Oslobođenja are excellent examples of the influence of Orthodox Christianity on Bosnian culture while the Catholic Cathedral just west of the old Jewish quarter is one of the many visible remainders from the Austro-Hungarians. 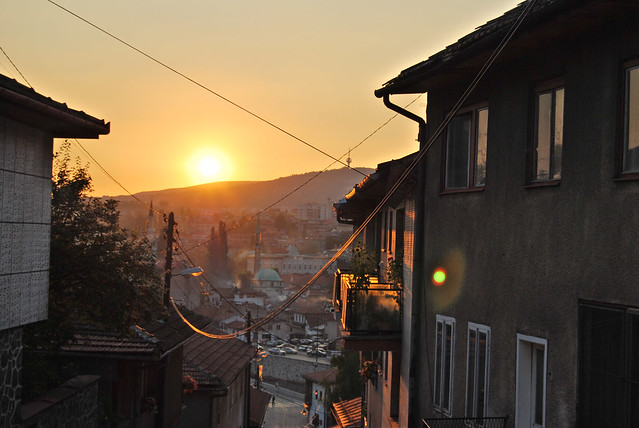 For a city of its size, Sarajevo truly lets loose with a raucous bar scene that could rival many larger metropolises. Renowned for late nights – and even later mornings, Sarajevans have no shortage of choices to while the night away, ranging from café-bars and pubs to live music bars and nightclubs.

There is no particular bar area in Sarajevo per se but many watering holes are dispersed in and around Maršal Tito Street to the west of the Eternal Flame. Zlatna Ribica (Kapitol 5) is one of Sarajevo’s most popular and unique bars, located just north the Eternal Flame. The interior is reminiscent of turn of the century Europe, showcasing theatre posters and art-deco pieces on its walls. Whether you are swigging rakija or just sipping a strong coffee, Ribica will keep you entertained with its eclectic music selection and its odd smattering of décor.

Further afoot Sarajevans rock out at Sloga (Mehmeda Spahe 20), one of Sarajevo’s premier live music venues. Noticably reminiscent of the Yugoslav era, Sloga hosts live bands and DJs ranging in styles: rock, folk, dance, jazz – and even Latin – are in the line-up. On Monday nights – one of Sloga’s big nights – spirited Sarajevans, after a strenuous weekend of burning the candle at both ends elsewhere, gear up to do it all again.

The Asian-inspired Buddha Bar (Radićeva 210) is perhaps Sarajevo’s most popular haunt for nighthawks looking to let loose on the dance floor until daybreak and beyond. Retro music circa the seventies and eighties pumps through the club enticing Sarajevans to spend their dwindling weekend hours with friends, new and old. With its relaxed atmosphere and great drink selection, it’s no surprise that the Buddha Bar is the nightcap of choice for Sarajevans. Just don’t plan anything for Sunday morning!