When searching out best things to do in Bratislava for the first time, I honestly expected the worst. I’d heard nothing but lukewarm reviews about Bratislava, mostly swaying towards how dull the capital of Slovakia was compared to other top Central European travel destinations.

While I can’t claim that it’ll trump other more popular cities in Central Europe, the top tourist attractions in Bratislava are hardly worthy of dismissal either. There’s plenty of charm among the top points of interest in Bratislava—both outward and hidden—that’ll surprise you if you enter with an open mind.

Not sure what to do in Bratislava? Let yourself slowly fall for the Slovak capital with this guide to the the best places to visit in Bratislava…

What to do in Bratislava: Top attractions & best places to visit

Only got one day in Bratislava? Set your compass to the city’s beguiling Old Town. While it might fall short of expectation swaying in from its former Czechoslovakian brother of Prague, Old Town flashes its ancient good looks as well as any small European capital could. 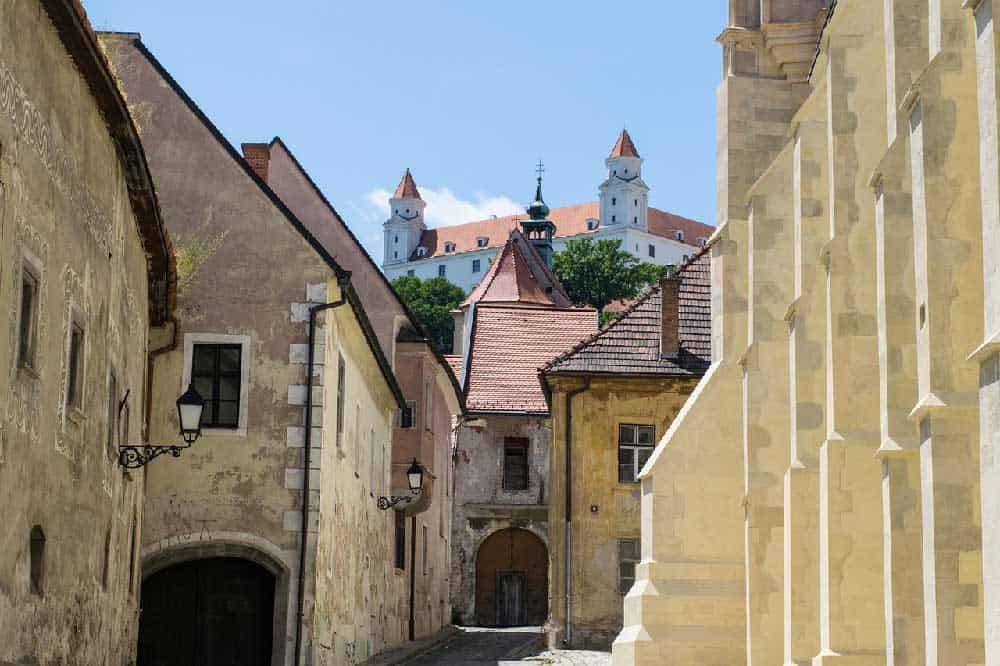 The best way to experience Old Town Bratislava is to simply let your feet guide you through. Walk through its narrow cobbled streets, stopping along the way at the churches, monuments, shops, and cafés that catch your fancy.

Get quizzical with Bratislava’s quirky statues

While you’re making your rounds in Old Town, keep on the lookout for Bratislava’s famous street statues. Peppered throughout Old Town, these few quirky—at times, borderline creepy—statues are sure to catch your eye and beg for a photo op. 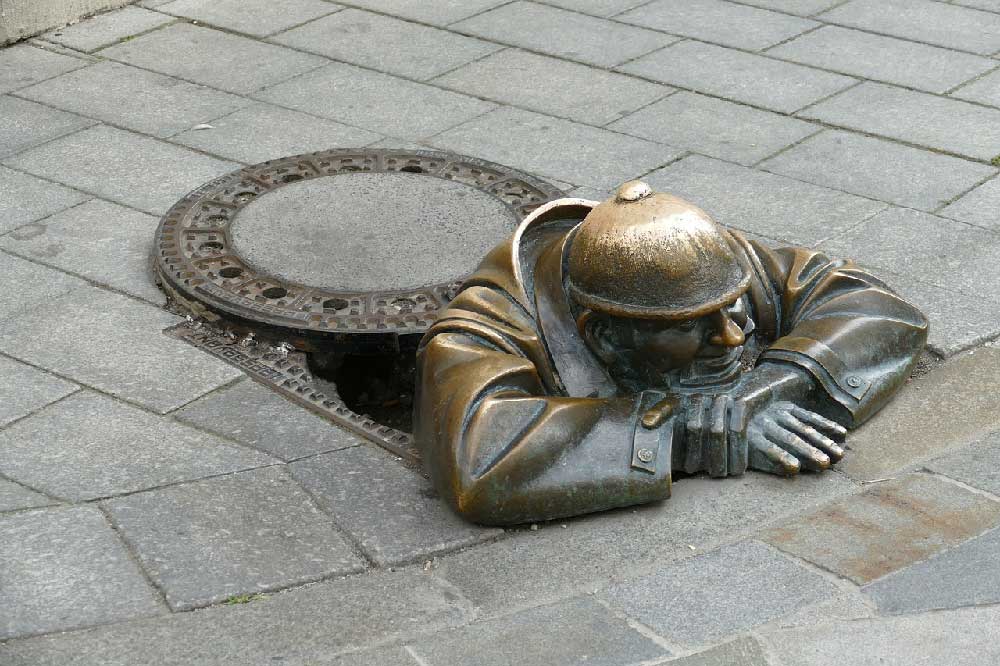 The most popular of these statues is Cumil, a bronzed worker popping his head out of a manhole. Some say he’s just a worker on break, others say he’s a creeper. Either way, snapping a shot of Cumil is bound to put a smile on your face!

Other statues found elsewhere in Old Town include Schöne Náci, a beloved 20th-century Bratislava performer; and Hubert, a Napoleonic solider leaning on a bench.

See the city from above at Bratislava Castle

If you’re expecting something like Neuschwanstein when visiting Bratislava Castle, you’re heading straight for disappointment. Let’s be perfectly honest: Bratislava Castle isn’t one of the most beautiful castles in Europe, or even Central Europe. That doesn’t mean you should give it a miss though! 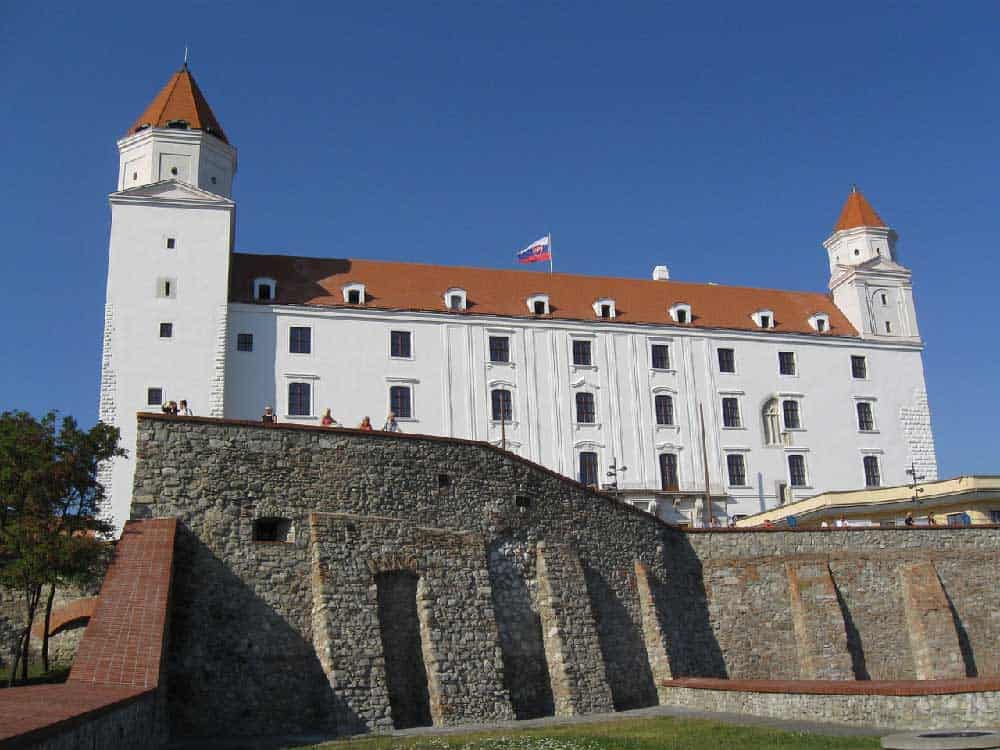 Occupying a strategic location over Old Town, Bratislava Castle serves up some incredible city vistas—even if its outward appearance looks more like a upside-down table than a former home to kings & queens. Inside, the castle grounds add slightly more charm to the visit with its beautiful Baroque garden.

Bratislava Castle is also home to the Museum of History, dedicated to Slovak history from medieval times to the modern day, and the Hradná Hviezda (The Castle Star), a restaurant/café serving up Slovak favourites with a view.

Sitting on the main square of Old Town, Old Town Hall is one of the city’s loveliest buildings and a must-see for history buffs visiting Bratislava. Inside lies the Bratislava City Museum, a museum dating back to 1868 that documents the entire history of Slovakia’s capital. 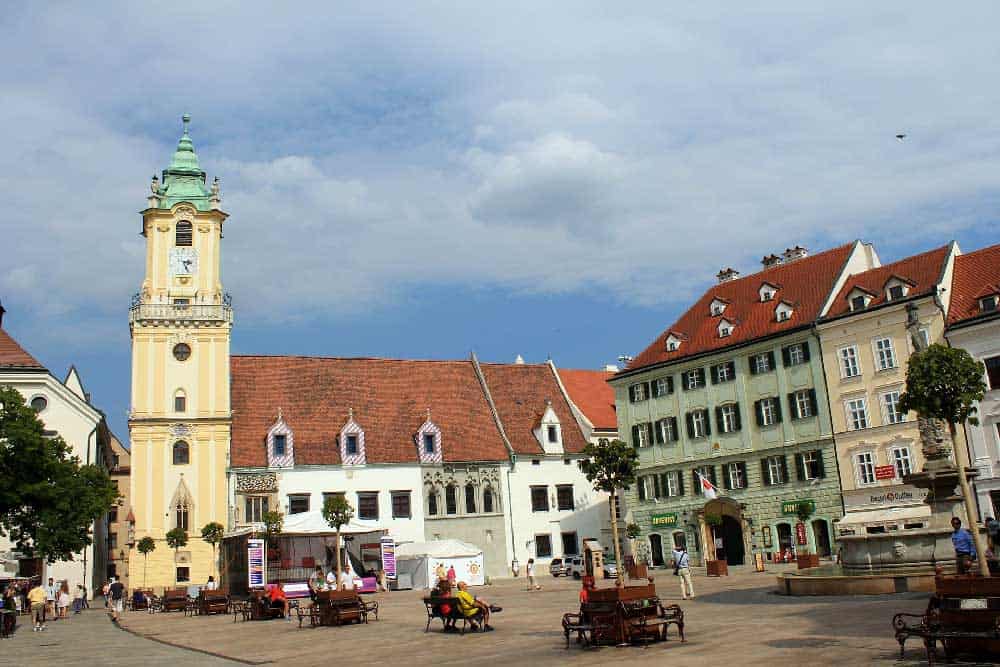 Undoubtedly, the quirkiest part of the museum—and the one most worth a visit, in my opinion!—is the basement where various torture devices and antique weapons used to quell dissent are on display.

Elsewhere in Old Town Hall, don’t miss a chance to catch one of the top things to see in Bratislava, a close-up glimpse of Old Town from above in the town hall’s clock tower.

As one of the city’s oldest structures and the only remaining medieval city gate, St. Michael’s Gate demands at least a modicum of attention when you’re nailing down the best things to do in Bratislava. The gate dates back to the 14th century when it was one of four military installations along the heavily-fortified walls around Old Town. 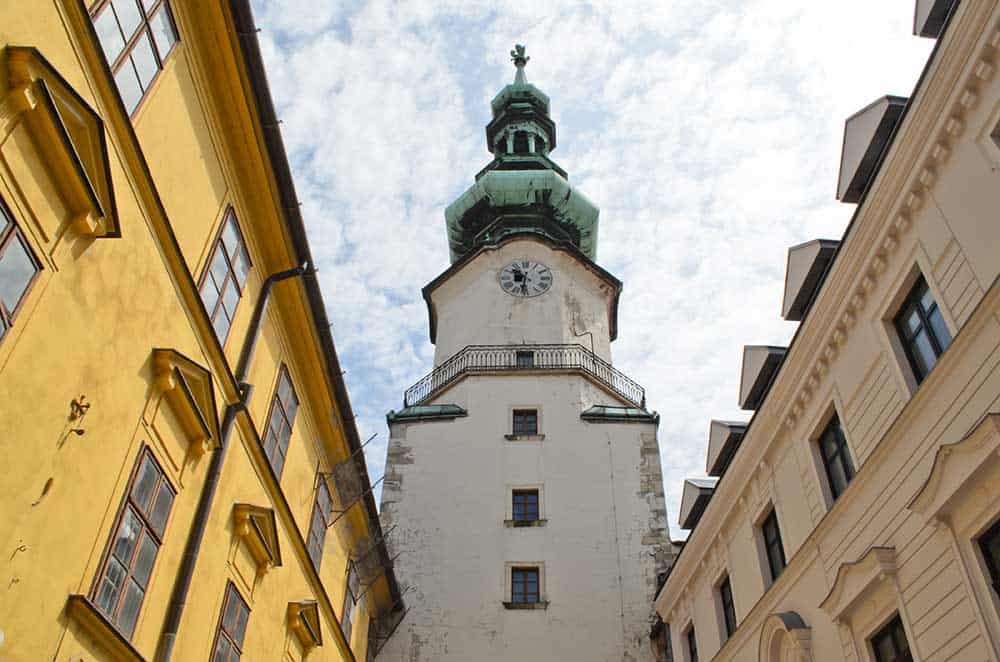 The most striking feature of St. Michael’s Gate is the mid-18th-century Baroque clock tower, a replacement the mid-14th-century Gothic original. It stands 51 metres high and offers visitors a stunning view of Old Town from its terrace.

For military buffs, the ground floor at St. Michael’s Gate is also home to the Museum of Arms, detailing the history of Bratislava’s fortifications and showing off replicas of medieval weapons & firearms.

Burst through the Old Town bubble at SNP Bridge

If there’s any destination you simply need to see outside of Old Town (besides Bratislava Castle) it’s SNP Bridge. Referred to by a variety of names—from Novy Most (New Bridge) to UFO Bridge, for its space-age façade—SNP Bridge was built to honour the Slovak National Uprising resistance movement against German invaders. 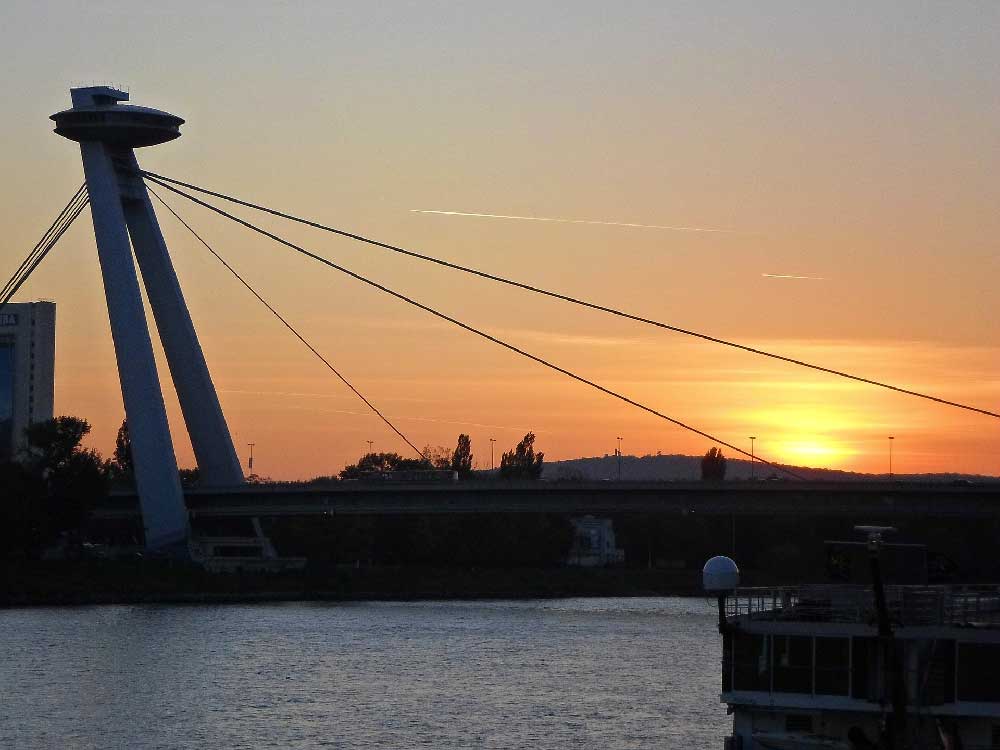 Since opening in 1972, SNP Bridge has become one of the most recognizable landmarks of Slovak’s modern age and one of the best places to visit in Bratislava. More compelling than its oddly-out-of-place looks, however, is the bridge’s observation deck and restaurant at the 95-metre-level that dish out some ridiculously lofty views to both the Old Town and its less-than-beautiful step-sibling suburb of Petralzka.

Beyond scoping out Bratislava from above, the restaurant features surprisingly good food and a stellar selection of Slovak beers & wines for such an obvious tourist trap. Time your visit with the sunset to enjoy a hearty Slovak meal while watching the sun dip below the Danube.

Step back into Slovakia’s medieval past at Devin Castle

If the lackluster appearance of Bratislava Castle leave you a bit numb, the magnificent ruins of Devin Castle, one of the best day trips from Bratislava, might prove a tad more inspiring. Wedged between the Danube and Morava Rivers on a 212-metre-high precipice with massive fortification walls and towering turrets, Devin Castle eases the mind into imagining knights battling marauders as they storm in to capture stronghold. 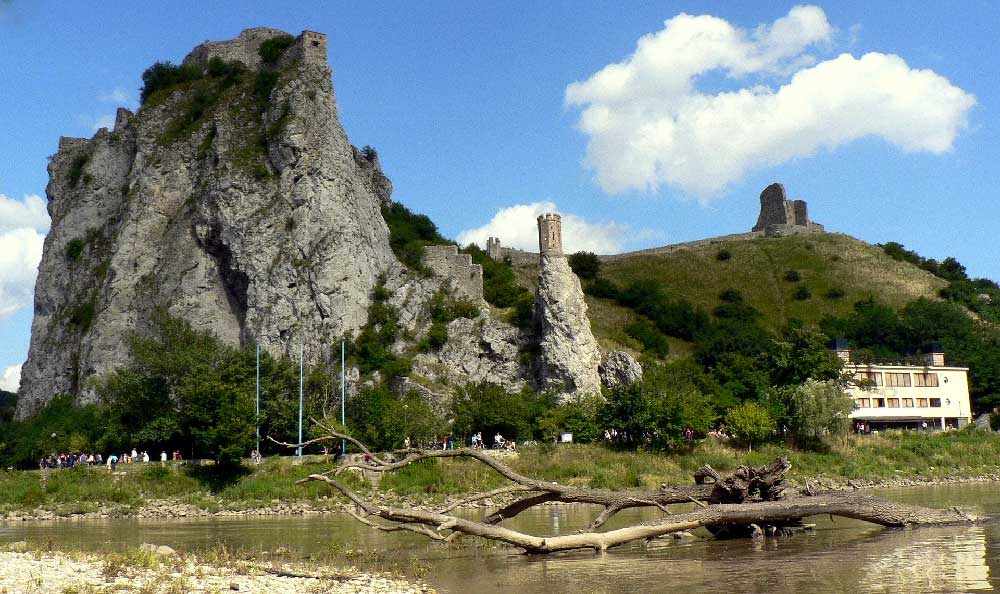 Although Devin Castle lies only 10 kilometres from the city (about 30 minutes by public transportation), you’ll want to carve out at least half a day to visit. The castle ruins are spread out over hilly terrain that could prove challenging for some travellers.

To squeeze the most out of your visit and for a better chance of unfettered views, visit early in the morning before the bulk of the tourist crowds descend.

Marvel at the blue hues of St. Elizabeth’s Church

Bratislava’s hardly low on inventory for beautiful churches. But none will catch your eye quite like St. Elizabeth’s Church just east of Old Town. Whereas Bratislava’s most compelling religious buildings usually dabble in classic architectural styles like Baroque & Renaissance, St. Elizabeth’s throws together the city’s best example of Hungarian Secessionist Art Nouveau style with more than a small dash of captivating colour. 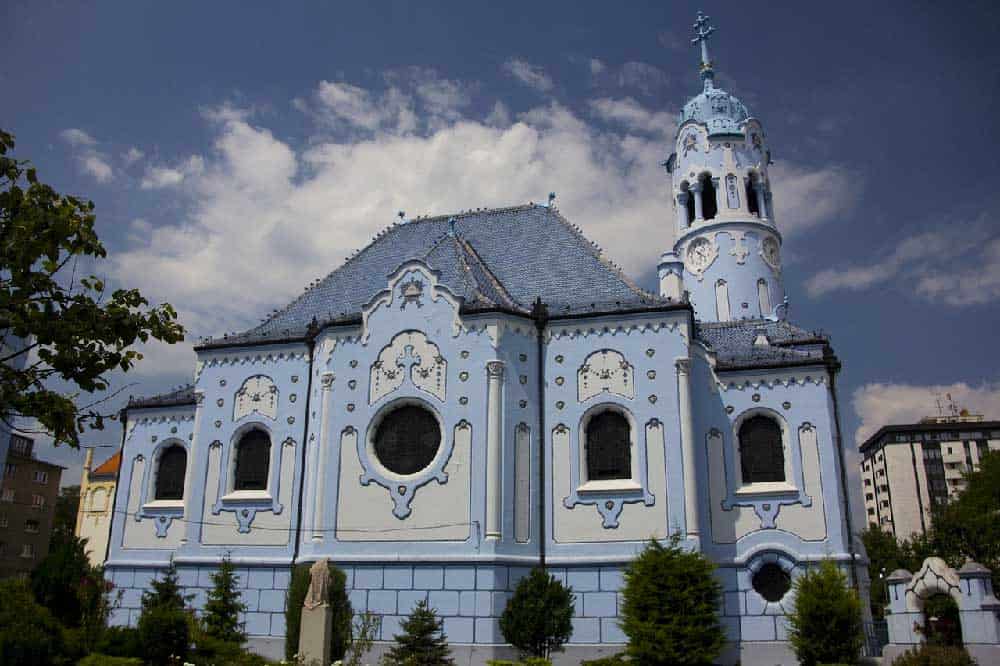 Be sure to charge up your camera to capture the church’s exterior, decorated with a fusion of Romanesque, Oriental, and Baroque elements blasted with a colourful mix of pale blues and off-whites. The inside of St. Elizabeth’s Church is equally beguiling, matching the exterior’s sky blue shades and contrasting them with subtle gold accents.

Where to stay: The best hotels for sightseeing in Bratislava

Unlike other—much larger—Central European capitals, choosing among the best places to stay in Bratislava isn’t such a challenge. If you’re looking to get close to all the top tourist attractions in Bratislava, Old Town (Stare Mesto) is definitely the place to be.

Check out these incredible accommodations options…