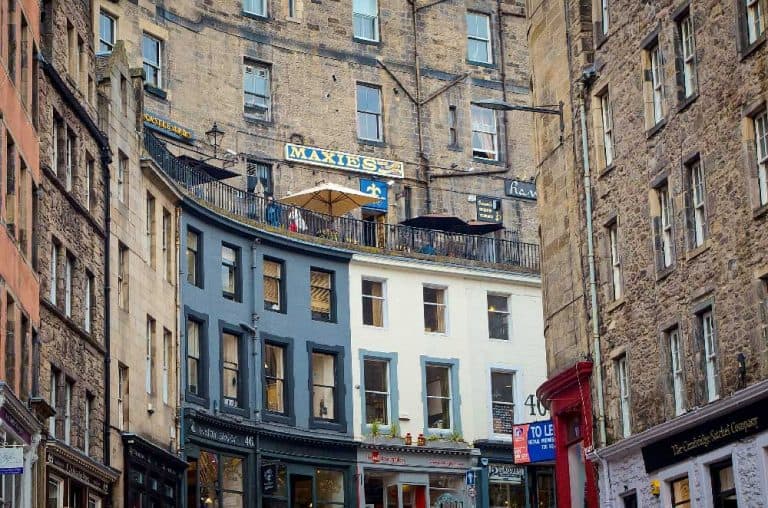 I’ve always scratched my head at how often the best things to do in Edinburgh fail to find themselves first-time European itineraries. While travellers all seem to focus their attention to cities elsewhere in Western Europe and the United Kingdom, I’d venture to put the top attractions in Edinburgh up against any of them. In a heartbeat.

And while the top points of interest in Edinburgh might not keep you busy for days on end like some of other top travel European destinations, what you’ll discover here will stick with you for a long time to come.

Not sure what to do in Edinburgh? Get started digging into Scotland’s stunning capital with this guide to the best places to visit in Edinburgh…

If there’s any place to get your bearings for exploring the best things to do in Edinburgh, it’s at Edinburgh Castle, the historical and cultural heart of the city.

The castle’s history draws way back into the 11th century when King Malcolm and Queen Margaret settled here.

In centuries to come, Edinburgh Castle functioned not just a royal residence but as an important military fortification that defended Scotland from invading armies. 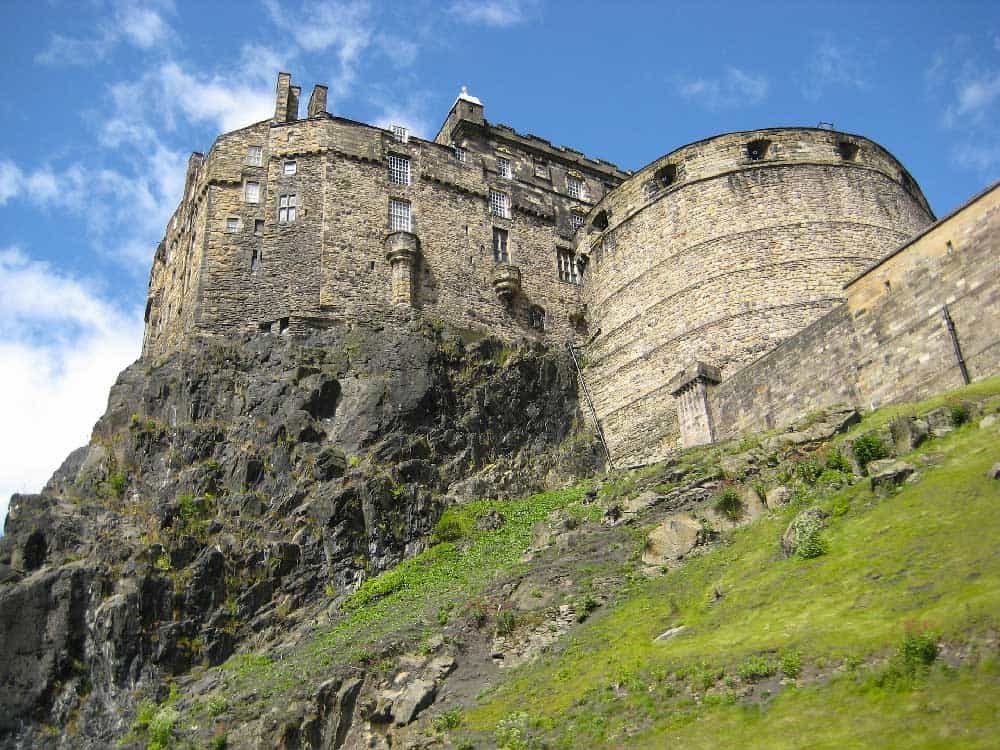 Inside, discover more about the history of Edinburgh Castle (and Scotland itself) by exploring its various exhibits including the Crown Jewels of Scotland, the National War Museum, the Castle Vaults, and St. Margaret’s Chapel, the oldest building in Edinburgh.

Besides getting to explore this gem—indeed one of the best castles in Scotland!—also leave yourself some time to scamper along the battlements for superb views over New Town and to the Firth of Forth in the distance.

Getting to Edinburgh Castle: It’s hardly a challenge to get to Edinburgh Castle as from nearly anywhere in New Town and Old Town, you’ll see it looming above. To get there, find your way to the Royal Mile and ascend slowly to the west where the castle is perched.

Gaze upon the city from above at Arthur’s Seat

Need a break from Edinburgh’s tourist bubble? Grab some fresh air just outside of Old Town at Arthur’s Seat, a dormant volcano that’s a favourite escape for guests and locals alike.

Even if hiking isn’t your jam, the walk up to Arthur’s Seat—the highest point in the city—puts some of the best views of Edinburgh at your fingertips. 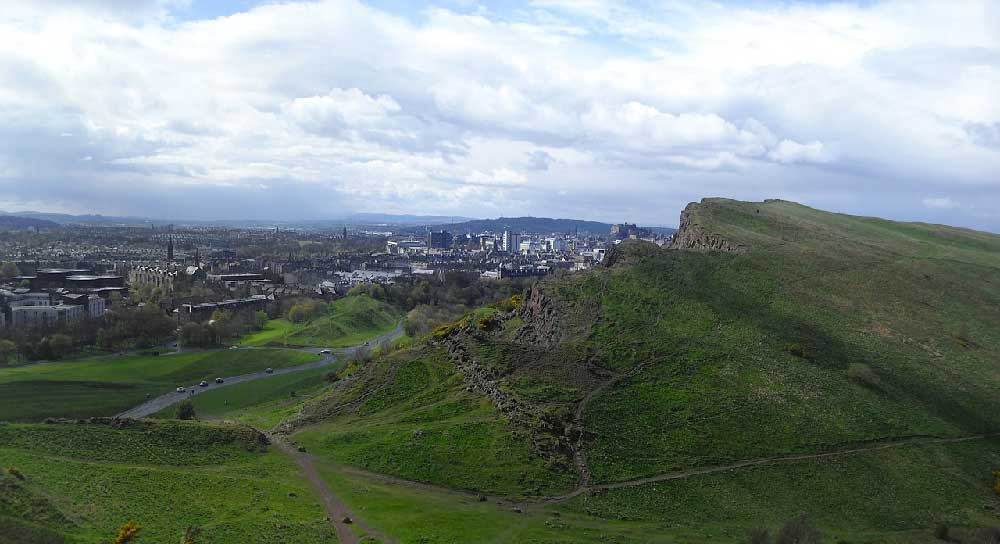 The trails to Arthur’s Peak range from relatively easy to moderate. For the best walk, hop onto the Red Route from Holyrood Palace that’ll zip past St. Anthony’s Chapel on route to Arthur’s Peak. Return through the rugged Salisbury Crags for incredible panoramas over Edinburgh.

The return hike should only take a couple hours, but I’d recommend tackling the park at a leisurely pace to escape the crowds and find some moments of unstructured solitude along the way.

Getting to Arthur’s Seat: The trailhead for the various paths up to Arthur’s Seat starts near Holyrood Palace at the east end of the Royal Mile. From the palace, walk south along Horse Wynd, turning left on and crossing Queen’s Drive. You’ll see the trailhead just up ahead.

Despite its status as Scotland’s official royal residence, Holyrood Palace possesses a history that echoes horror flicks more than fairytales. Snagging a spot on a Holyrood Palace tour, you’ll not only get to see the palace’s opulent regal apartments, but glean its dark past. 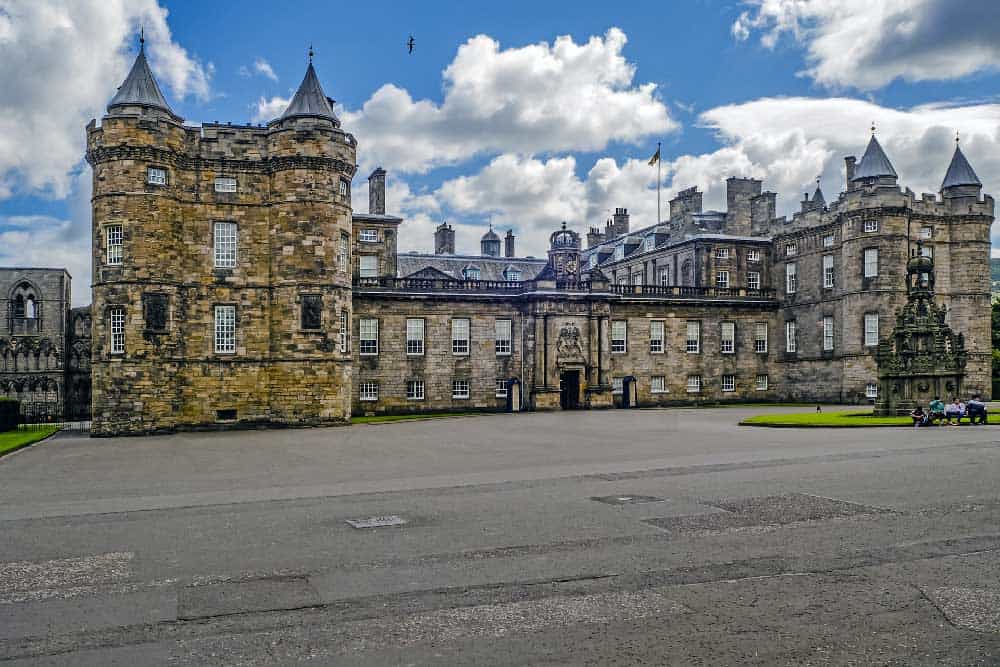 In the 16th century, Holyrood Palace was home to the infamous Mary, Queen of Scots who spent six years here. The most compelling part of the tour visits Mary’s Bedchamber where the pregnant queen was forced to watch her favourite secretary (and suspected lover) David Rizzio get murdered by her husband, Lord Darnley, and his collaborators.

Getting to Holyrood Palace: If you’re already in Old Town, the palace is a cinch to find as it sits on the far eastern end of the Royal Mile.

While there are certainly better shopping streets in the UK, none is quite like Princes Street. Featuring unhindered views of Old Town including the mysterious Edinburgh Castle above, Princes Street could be one of the most beautiful places in the world to unload your money. 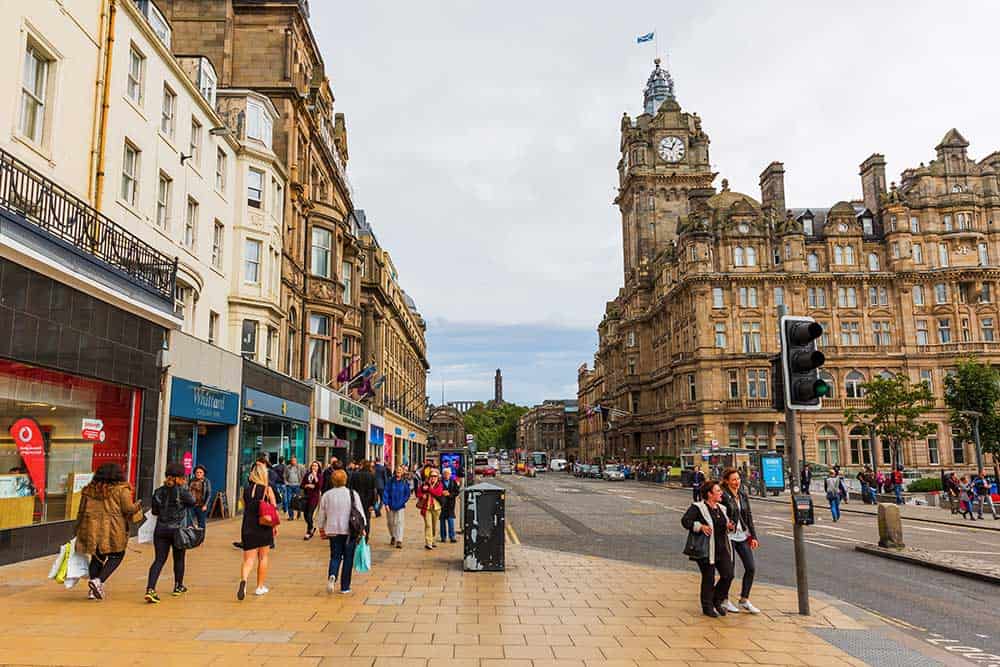 Unlike most high streets, Princes Street only sports shops on one side. Famous boutiques and department stores like Marks & Spencer, Zara, Jenners, Debenhams, and House of Fraser fill out the buildings on the northside while the beautiful green parklands of Princes Street Gardens, dwelling under the shadows of the Old Town and Edinburgh Castle, lies to the south.

Getting to Princes Street: The street lies just outside of Waverley Station. Leave the station using any of the exits to the north to find Princes Street.

Sip on perfection at the Innis & Gunn Brewery Taproom

For fans of Scotch whiskey who also happen to enjoy craft beer, I’d bet my last bite of haggis that Edinburgh’s own Innis & Gunn will become an instant favourite.

Although this brewer’s barrel-aged beers are now famous worldwide (and, quite especially, in my own fridge!), there’s no better place to experience their unique brews than at the Innis & Gunn Brewery Taproom in Edinburgh. 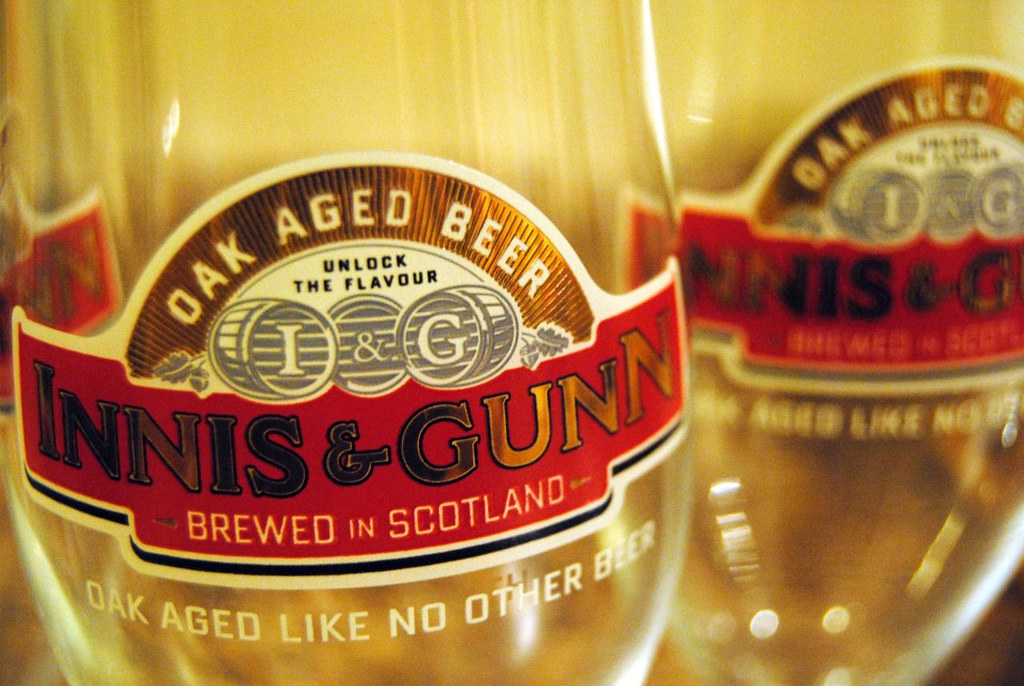 At this popular taphouse, easily one of the best craft beer bars in Edinburgh, you’ll get your pick of 26 of Innis & Gunn’s most refreshing draughts including its original Bourbon barrel-aged beer—famous for its caramel, oak & toffee notes—as well as seasonal brews.

Time your visit with their Sunday Brew School or gobble down some of its typical British pub food to get full mileage out of your experience.

Getting to Innis & Gunn Taproom: The pub is located at 81-83 Lothian Road, about ten minutes from Edinburgh Castle by foot. From the main entrance, follow Johnson Terrace (south of the castle) to Grindlay Street and turn right. When you hit the fork in the road, keep left towards Lothian Road. The taproom will be located to your left.

There’s hardly a stretch of road in the world more majestic than the The Royal Mile in Edinburgh. Stretching down from Edinburgh Castle to Holyrood Castle, this street surges through the heart of Old Town pinned with buildings that conceal shops, restaurants & whiskey bars among hidden stairwells and narrow alleyways. 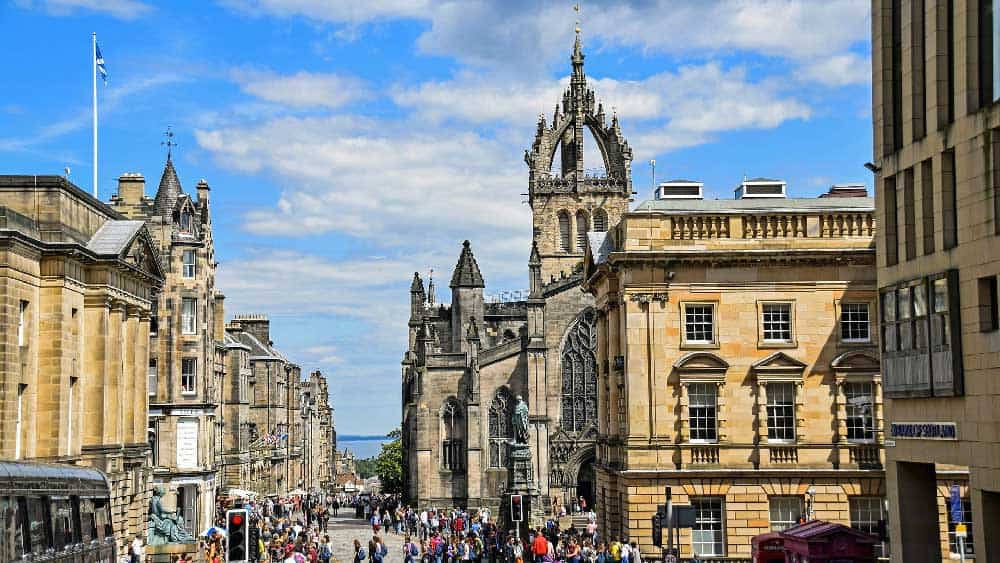 The best way to experience The Royal Mile, even if you’ve only got one day in Edinburgh, is to simply let your legs and your eyes explore. Be sure to save time for popping into top Edinburgh attractions along the Mile like St. Giles’ Cathedral, The Real Mary King’s Close, and the Scotch Whiskey Experience.

While trotting along The Royal Mile, be sure to pop into The World’s End, a pub that once demarcated the fringes Edinburgh’s Old City Walls.

Besides being one of the most popular places along The Royal Mile to enjoy a pint, The World’s End is famed for serving up some of the city’s best traditional Scottish food.

(And famous in my own life’s journey for being the first—and last!— place I’d ever try the infamous Scottish dish of haggis whose “secret” recipe my weak stomach would feel more comfortable letting someone else describe.)

Getting to Royal Mile: From Waverley Station in New Town, exit to North Bridge and venture south towards Old Town. For a more interesting route up to Old Town, scurry up any of the “closes” or stairwells from Market Street or Cockburn Street.

Get spooked at The Real Mary King’s Close 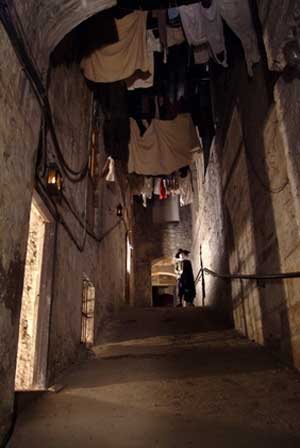 If The Royal Mile feels a little too happy-go-lucky for you, detour off to The Real Mary King’s Close for stories of ancient Edinburgh that are anything but.

Buried beneath Old Town The Real Mary King’s Close is part of a network of hidden streets and stairwells that harken back four centuries—and have changed little since.

At The Real Mary King’s Close, costumed tour guides well trained in theatrics lead you through stories of Edinburgh in the 17th century as the bubonic plague swept through Europe.

The bustling trading area around The Real Mary King’s Close was among the hardest hit in the city, eventually leading to its closure and burial under the Royal Exchange less than a century later.

Even if you don’t buy into the rumours that The Real Mary King’s is haunted, exploring the creepy subterranean alleyways is among the best things to do in Edinburgh. Visit at night—if you dare!

Where to stay: The best hotels for sightseeing in Edinburgh

Unlike its bigger “brother” Glasgow, sorting through the best places to stay in Edinburgh isn’t too arduous. The biggest challenge you’ll have in Scotland’s capital is that due its massive popularity among travellers, you’ll need to be sure to book your rooms well in advance of your trip.

Stick in & around Old Town, where many of the top points of interest in Edinburgh lie, to get the most out of your itinerary.