As you sort through the best things to do in Zagreb, you’ll quickly discover a delightful mix of Croatia’s past and the present. Counted among the top tourist attractions in Zagreb, the cultural and political centre of Croatia, are quirky museums, cobblestone streets, and historic churches.

Zagreb is also a vibrant city full of entertainment, dining, and shopping. Whether you want to spend the day ambling down side streets, relaxing at a café, or gazing at beautiful historic architecture, there’s something among the main places to see in Zagreb for every traveller.

Need help deciding where to go in Zagreb? Get started with this Zagreb attractions guide including the best places to visit in Zagreb…

Travelling beyond Zagreb? Check out our Croatia Travel Guide for more ideas on what to do & see and where to go!

What to do in Zagreb: Top attractions & best places to visit

If you don’t know what to do in Zagreb, start with a trip to the famous Zagreb Cathedral.

The cathedral was originally built in the early 1200s. Since then, it has been destroyed, rebuilt, and renovated numerous times over the centuries. 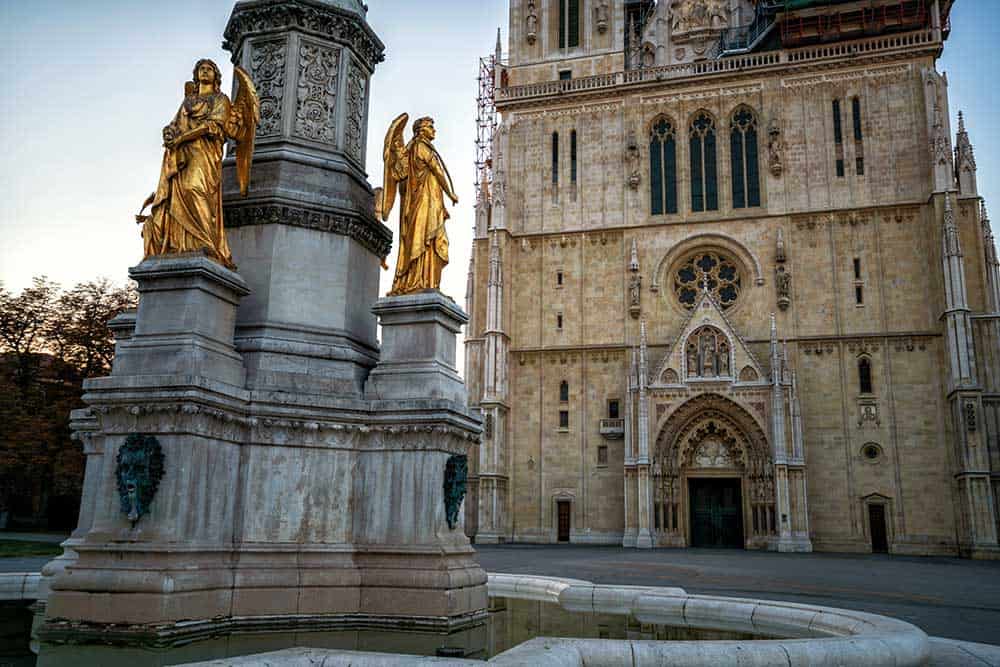 Despite the many updates, it’s still one of the most impressive sights that you’ll likely see in your lifetime.

The large open square outside of the cathedral provides a clear view of the large, golden-yellow façade featuring detailed scrollwork around the entrance.

Stepping inside the cathedral, you’ll find many other treasures, including priceless statues and paintings.

Whether you have one day in Zagreb or a week, it’s a must-see destination and an important part of the city’s history.

Laugh and cry at the Museum of Broken Relationships

Besides striking medieval architecture, Zagreb is known for its quirky museums. Case in point: the Museum of Broken Relationships.

As you may guess from the name, the Museum of Broken Relationships includes artifacts related to failed relationships. 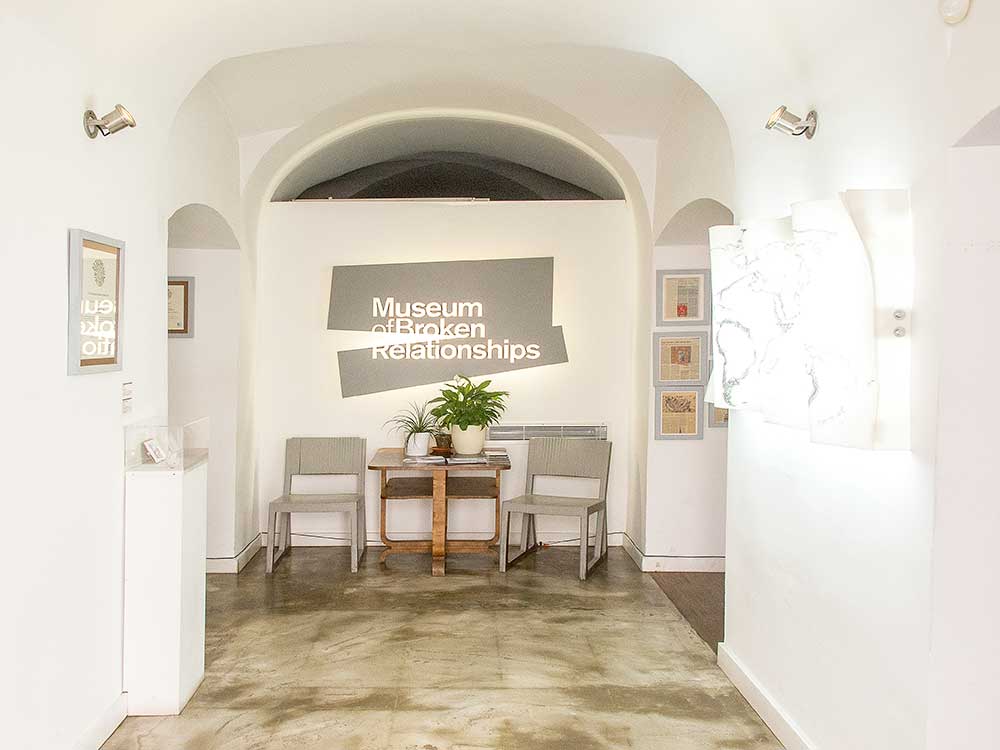 The items include everything from an axe in the wall to notes and paintings. The various objects are accompanied by stories, letting you know more about the relationship and the meaning behind the object.

One of the more interesting things to see in Zagreb, the Museum of Broken Relationships isn’t the only museum in the city.

Next door is the Museum of Naïve Art, which features artwork from untrained painters. Most of the artists are farmers from the region. A few minutes away from these two museums is the Museum of Torture. You can see a real guillotine and other cruel devices.

Zagreb has more than just odd museums. There are also several historical museums and a modern art museum among the top places to visit in Zagreb.

If you don’t know where to go in Zagreb, climb Lotrscak Tower and check out the city from above. The tower is at the top of the slope that marks the beginning of Upper Town. 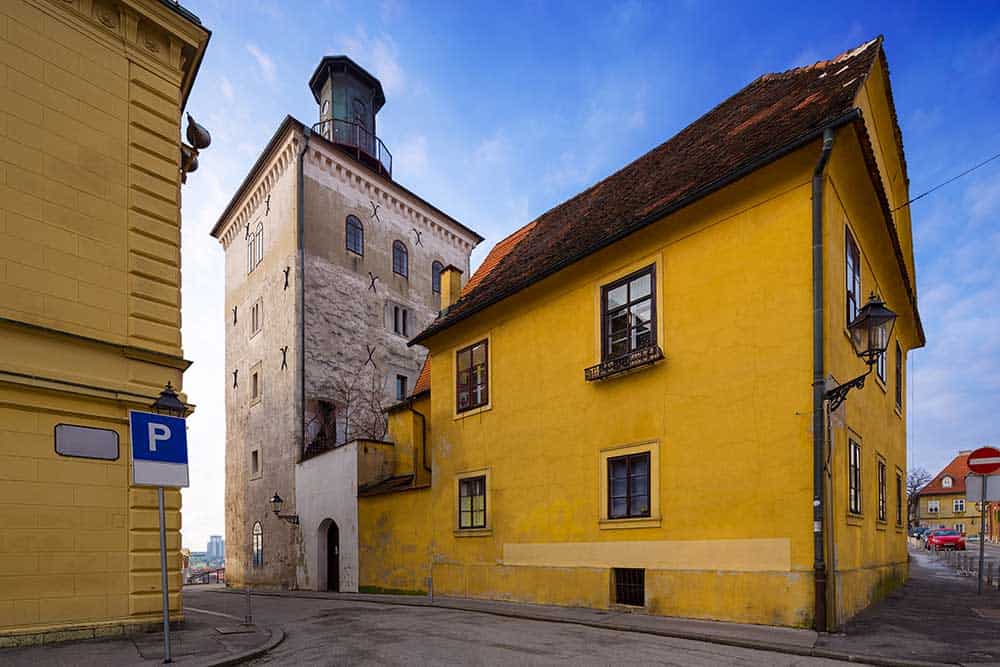 From the tower, you can get a wide, sweeping view of Zagreb. Before you get that view, you need to climb steep steps to reach the top.

The tower is mostly known for its great views and the traditional cannon-firing.

Every day at noon, the cannon fires to signify the city’s victory over the Turks. At least, that is one theory. The cannon also marks midday, letting bell-ringers in the city’s churches know when to ring their bells.

Visit the centre of the city at Bana Jelacica

Zagreb sightseeing tours always start at Bana Jelacica in the centre of the city. In fact, most of the main roads lead away from the square, which makes it easy to find your way to if you get lost. 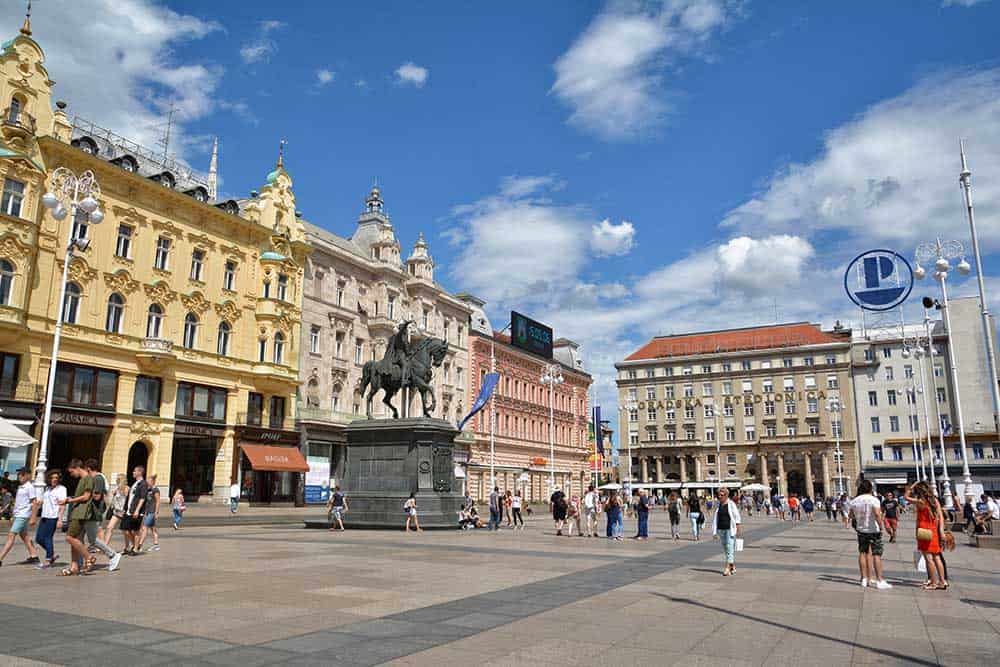 Bana Jelacica is one of the main gathering spots in Zagreb. People tend to congregate here, providing plenty of chances for people-watching.

This area was first used as a public square over 400 years ago. The oldest building still standing in Bana Jelacica was built in the 18th century. It’s now the most popular destination in Zagreb, due to its central location.

The square became a car-free zone in 1975, making it a pedestrian-friendly meeting space.

It also underwent numerous renovations in the late 1980s, when it hosted the 1987 Summer Universiade. It’s now jam-packed by midday with tourists, locals, vendors, and street performers.

Like most cities, one of best things to do in Zagreb is to eat. For hungry travellers, Dolac Market is a good place to start.

The sprawling Dolac Market is located near the city’s centre and is one of the most unique places to visit in Zagreb. 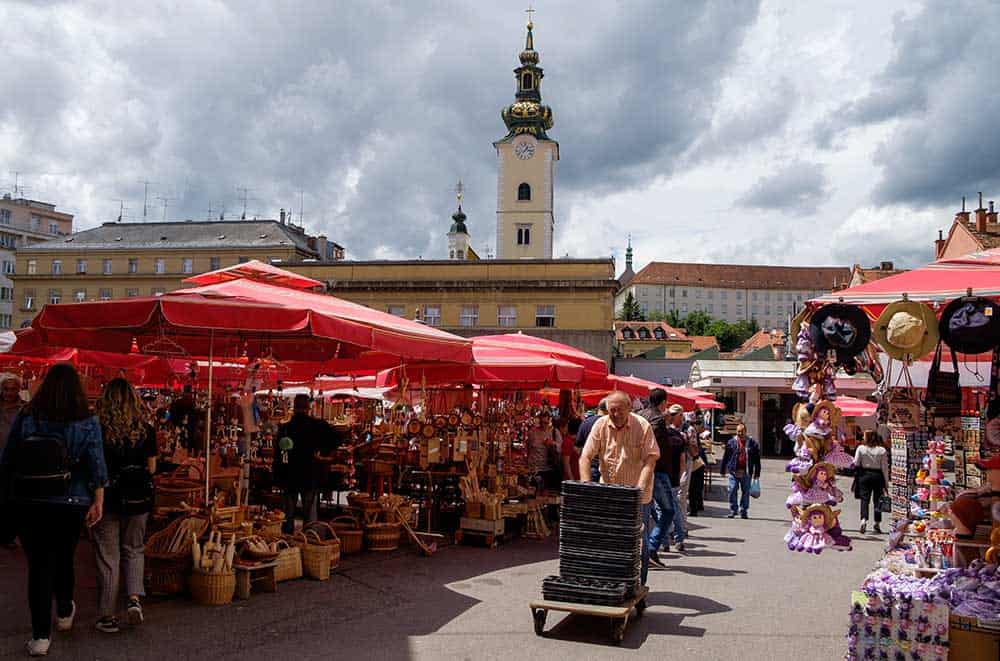 Dolac Market has been the main trading spot in the city since 1926. Each day, farmers from the surrounding villages arrive to sell their fresh foods.

You can easily reach Dolac Market from Bana Jelacica. It’s less than a hundred meters away and built on a raised platform.

The market is one of the main Zagreb points of interest as it also provides access to several other markets. Underneath Dolac Market, you’ll find a large meat & dairy market. Around the corner is the city’s fish market.

At Dolac Market you are also surrounded by shops, restaurants, and cafes, providing endless opportunities to drain your travel funds and fill your stomach.

Watch the changing of the guard at St. Mark’s Church

St. Mark’s Church is at the top of the list of Zagreb attractions. While the building is not as elegant as Zagreb Cathedral, it’s an important historical site. 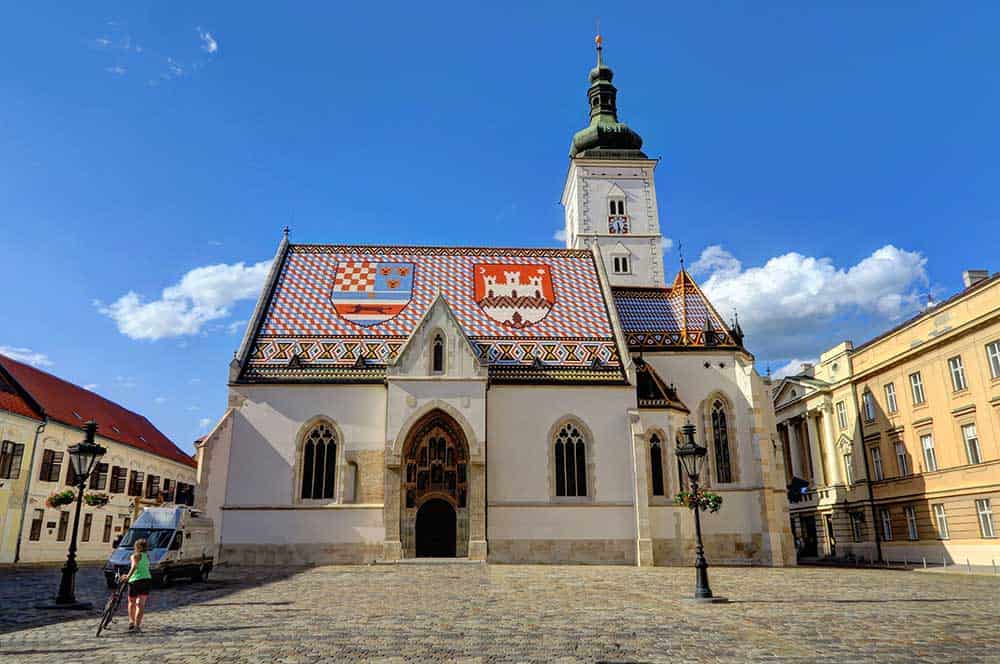 The church is only open to the public during mass. If you are lucky enough to arrive at noon, you may get to watch the changing of the guard. This occurs every Saturday and Sunday between April and October.

Walk through an air-raid shelter at Gric Tunnel

Gric Tunnel has an interesting history that places among the top ideas for what to see in Zagreb.

The tunnel is a former air-raid shelter built in 1943. It was built during World War II and then mostly abandoned until it was used to host a massive rave in 1993. 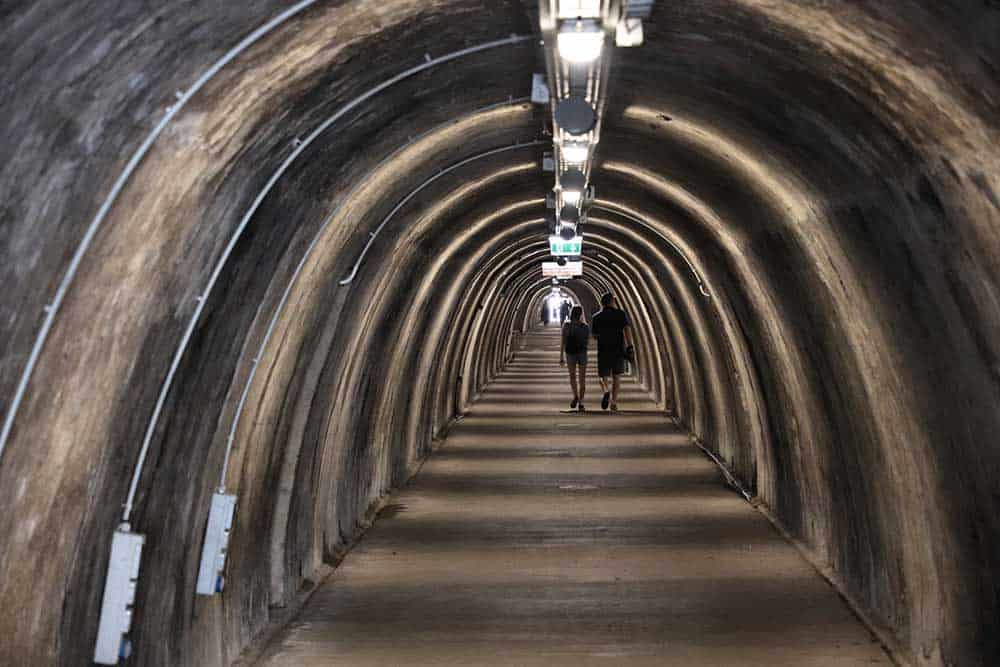 A few years ago, Gric Tunnel was reopened to the public after thorough renovations. You can reach it from two different spots and use it to beat the heat when travelling around Zagreb.

The tunnel stretches over 350 meters under Zagreb, between Stjepan Radic Street and Mesnicka Street. There are six different exits, public toilets, and a lot of interesting graffiti.

Where to stay: The best hotels for sightseeing in Zagreb

For travellers, picking out where to stay in Zagreb isn’t such a huge ordeal. Many of the city’s top attractions lie in & around the city centre where you’ll find the bulk of the accommodations. If you want to stay close to all of the action, Gornji Grad (Upper Town) and Donji Grad (Lower Town) are the two best areas.

Beyond Zagreb: More places to go in Croatia