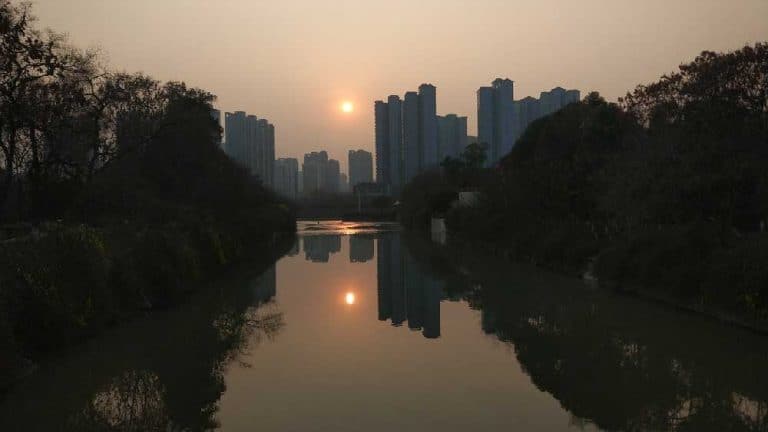 Struggling to decide where to stay in Chengdu? The sprawling metropolis includes many interesting areas & neighbourhoods to explore, making your critical when planning out your trip.

Chengdu isn’t one of the most visited destinations in China but it’s a massive city with lots to offer to travellers.

As you travel from teahouses and temples to clubs serving craft beer, you’ll easily fall in love with this charming city. The spicy local cuisine, rich history, and relaxed vibes should leave you wanting to extend your trip.

You can spend time viewing pandas in their natural habitat, take in a traditional Chinese opera, and travel to historic temples. The city also has numerous pedestrianised streets with endless shopping and dining options.

With a large expat community and many students, the city is youthful and culturally diverse. There’s a lot of variety in the city, offering both traditional to modern takes on a country that’s thousands of years old. With so much to see & do, you’ll need to cover a lot of ground. Staying near the action should help cut down on travel time.

Need help finding accommodations? Start searching for the right spot with this guide to the best places to stay in Chengdu…

Where to stay in Chengdu: The best neighbourhoods & areas

Chengdu is one of the largest and most modern areas in the Western part of China. The urban area spans over 1700 kilometres and includes 11 separate districts that fit together as if they are a massive puzzle. 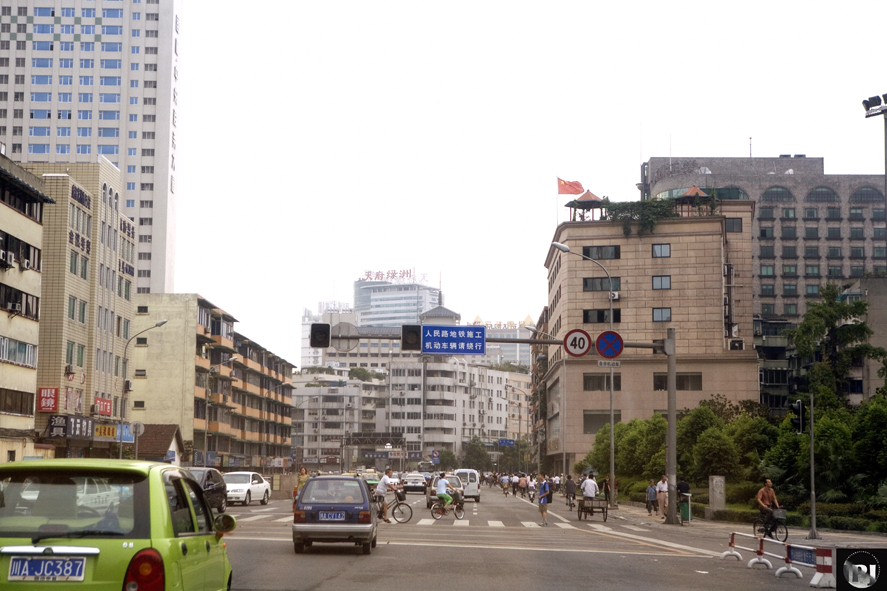 The capital of Sichuan province has attractions spread all over. To navigate the city, you’ll need to rely on the six major metro lines.

Of course, staying close to the attractions you want to visit gives you more time for sightseeing. Most tourists choose to stay near Tianfu Square in the heart of the city centre but there are plenty of other choices.

Outside of the downtown area, you’ll find large public parks, temples, and historic towns. The top districts and neighbourhoods are still modern with numerous hotels and shopping complexes.

Some of the best areas to stay in Chengdu for travellers include:

✔ Best area to stay for sightseeing and foodies

If you’re visiting Chengdu for the first time, consider staying in the heart of the city. You’ll find the top things to see & do in Chengdu in the downtown area. 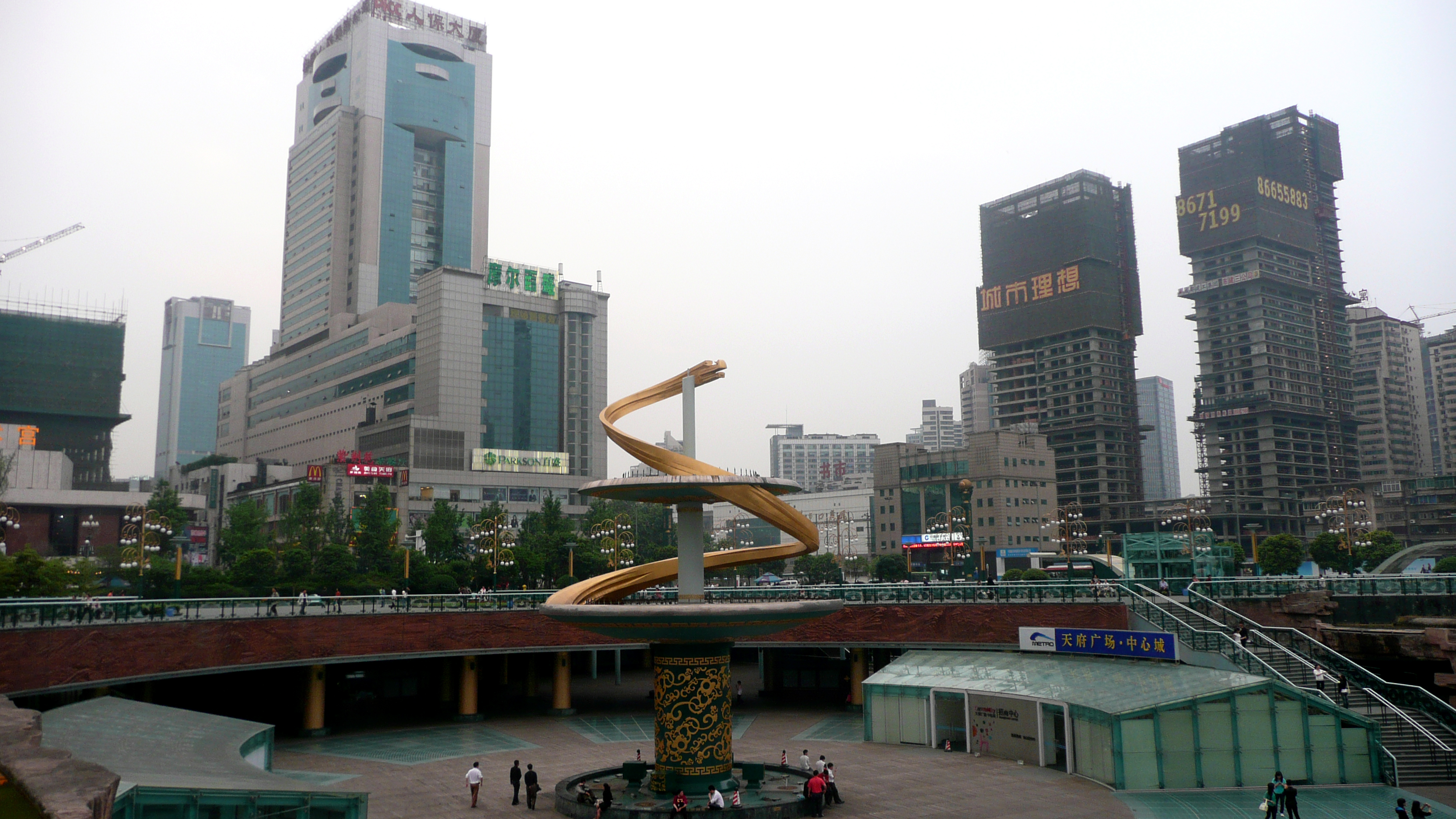 It’s also the easiest area to navigate. A long ring road surrounds Chengdu City Centre, which also covers portions of the surrounding districts. You can make the downtown area your home base while exploring more of the city.

Staying in Chengdu City Centre places you near some of the best destinations in the city, such as People’s Park. This urban green space includes a couple of museums, a café, and tranquil pond surrounded by various shaded paths.

In the very centre, you’ll come across the Sichuan Science and Technology Museum. It’s an interesting spot with a wide variety of exhibits featuring 3D movies, flying saucers, and interactive models.

The city centre is also the cultural hub of Chengdu. West of People’s Park is Kuan Alley and Zhai Alley. It’s an ancient shopping street lined with shops and stalls. Purchase or browse local folk art and souvenirs or get your fill of the infamous spicy local cuisine.

The city centre has the greatest selection of hotels with over 100 options spread throughout the downtown area. A few of the top choices are just around the corner from People’s Park or Tianfu Square, giving you quick access to the best sites in the city.

✔ Best area to stay for history buffs and luxury travellers

Wuhou is just south of the Jinjiang River and a few blocks away from People’s Park and Tianfu Square. As with a lot of areas within Chengdu, it’s got a mixture of historic sites and modern commercial districts. 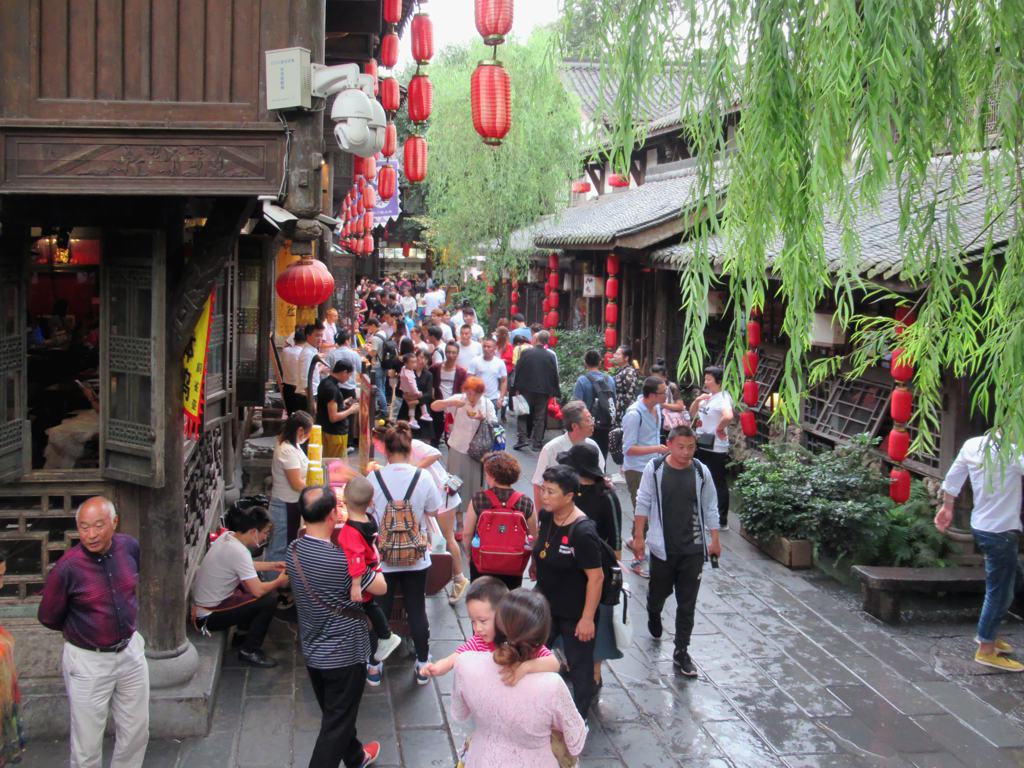 It’s the largest of the central districts with a population of over one million residents. Despite the larger population, it’s still got the same laid-back vibe as the rest of the city.

If you’re into the history of the region, take a trip to Jinli Street or the Wuhou Shrine Museum.

Jinli Street is a historic pedestrian shopping street. Instead of modern goods, you’ll find narrow streets with stalls and small markets. It also branches off into numerous side alleys. You could easily lose yourself and the rest of your spending money exploring the historic shopping street.

The Wuhou Shrine Museum gives you a chance to learn more about the Three Kingdom Culture. Built over 1700 years ago, it helps showcase the history of Sichuan Province.

Along with history, the area has many modern malls, restaurants, and hotels. In fact, the city is in the middle of modernising large swatches of the district.

As with most of the city, Wuhou has a lot of diversity. While most of these options are several kilometres from the city centre, you can easily hop on the metro to reach any part of the city.

✔ Best area to stay for high-end shopping and nightlife

For luxury shopping, dining, and clubbing, visit Jinjiang. It’s just east of the downtown area and a short commute from some of the main attractions. 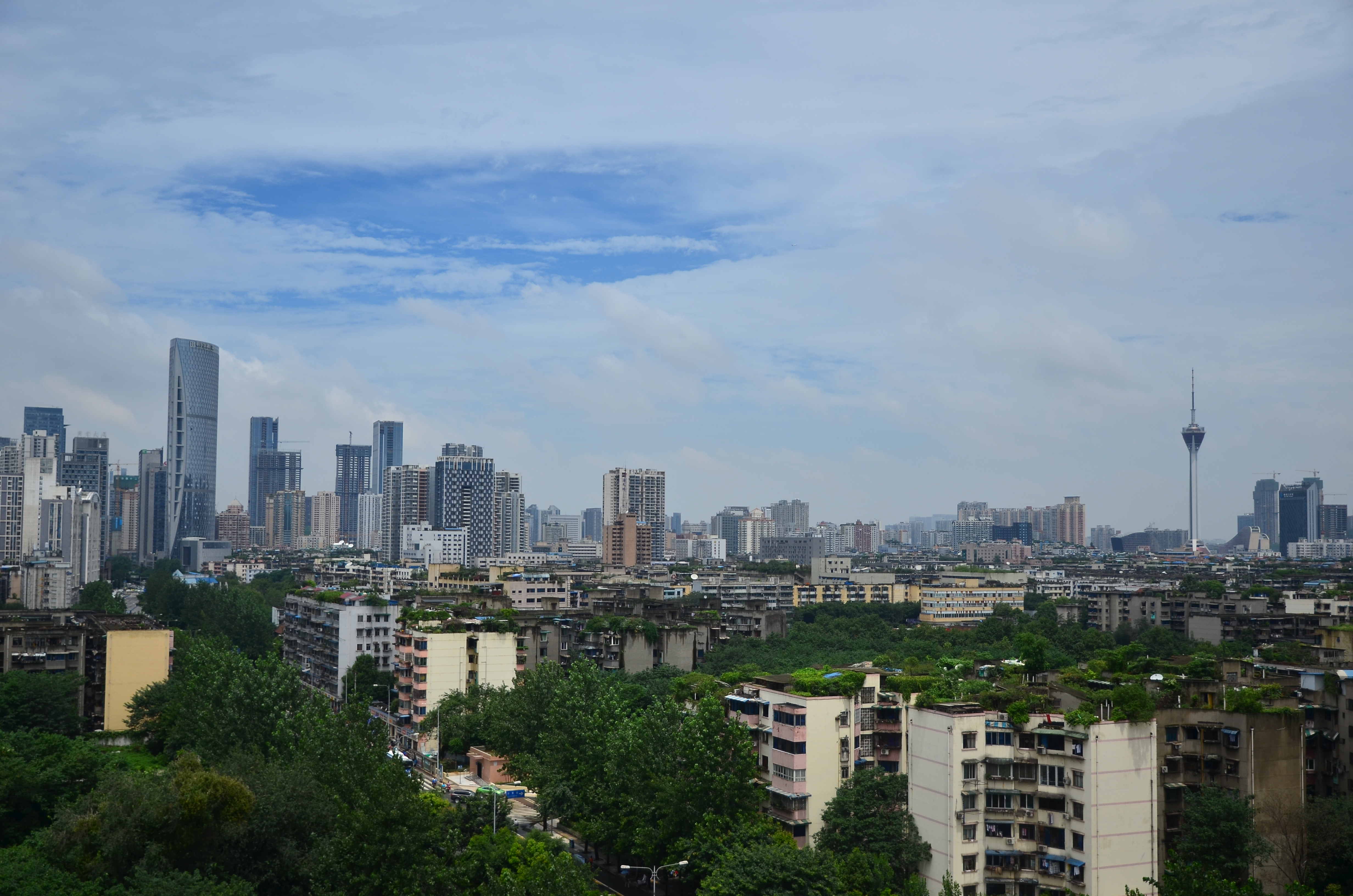 As with most districts in Chengdu, Jinjiang has lots of history. It’s the birthplace of paper currency and the first merchant bank. This is fitting, considering that it’s one of the main business districts in the city.

The modern commercial and industrial developments drive the local economy, bringing many five-star hotels and luxury restaurants to the area.

Jinjiang tends to attract the younger crowd. Travel to some of the busier streets in the evening and you’ll find no shortage of craft beer and hip music.

Despite the fun nightlife, Jinjiang remains a chill neighbourhood during the day. You may find locals sitting outside cafes playing mah-jong and enjoying their tea.

It’s also home to Chunxi Road, the most popular pedestrian shopping street in the city. It’s a wide boulevard flanked by various department stores and malls. Shop luxury brands and scarf down some fast food.

If you’re searching for luxury hotels, the Jinjiang district has you covered. It’s home to some of the best hotels in Chengdu. You also have a wide range of options located near Chunxi Road. You can walk out of the hotel and reach the popular shopping street within minutes.

✔ Best area to stay for fresh air and culture

Qingyang has a few of the most important cultural sites in the city, making it a top choice for your Chengdu itinerary. It covers the area north of Chengdu City Centre and includes several temples, monasteries, and historic sites along with the usual mix of modern developments.

Generally, the cities in Western China generate less smog compared to the eastern megapolises such as Beijing. While Chengdu has comparably cleaner air, the Qingyang district boasts the greatest air quality in the city.

You can thank the large public parks and green spaces for the fresher air. The green spaces include the Huanhuaxi scenic area, offering walking trails and lots of native plant life to explore.

You’ll also get to visit some of the historical sites such as the Jinsha Site museum or Du Fu Thatched Cottage Museum.

If you visit between June 15th and the 23rd, you’ll get to experience the wonder of the International Festival of Intangible Cultural Heritage. The streets become lined with performers, parades, and floats.

Whether you want a balcony with views of the city or a quiet spot to rest at night, Qingyang has many choices. It’s also near the city centre, allowing you to easily reach the main attractions on foot. The hotels in the area tend to cost a little more compared to the neighbouring districts.