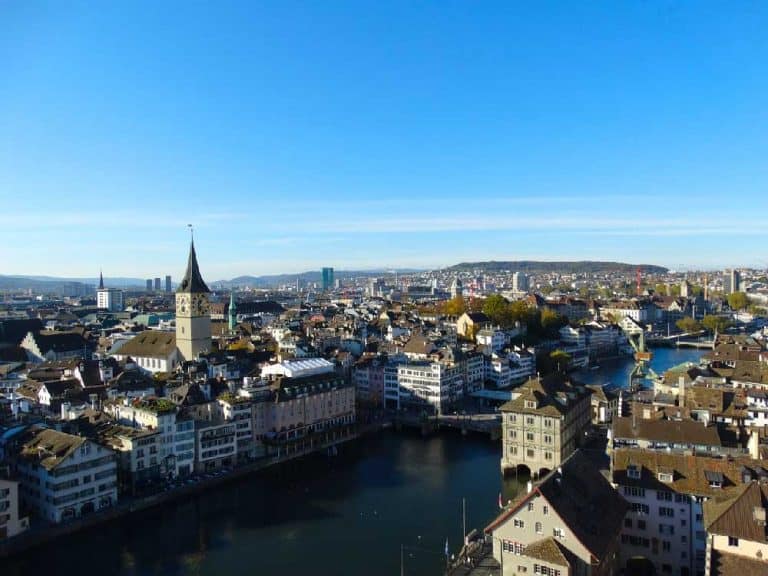 Staying in any of the top Zurich neighbourhoods, you’ll quickly discover, not just the best hotels in Zurich, but everything the hippest travel destination in Switzerland is famous for. Whether it’s banks, chocolate, fondue, cheese or one of its numerous museums, churches, and local festivals, culturally diverse & liveable Zurich has got all the Swiss stereotypes covered—and then some.

Ready to find the perfect Zurich hotel? Start your Zurich accommodations search with this complete guide to the best places to stay in Zurich including the top hotels, neighbourhoods, areas & districts…

Looking for more ideas for your trip? Check out our other hotel & accommodations guides and our Switzerland Travel Guide for recommendations on when to visit, where to go & what to do!

Best areas to stay in Zurich: The top hotels & neighbourhoods

Zurich is the largest city in Switzerland but only covers about 87 square kilometres. It’s built around the tip of Lake Zurich, extending in all directions from the historic Old Town. 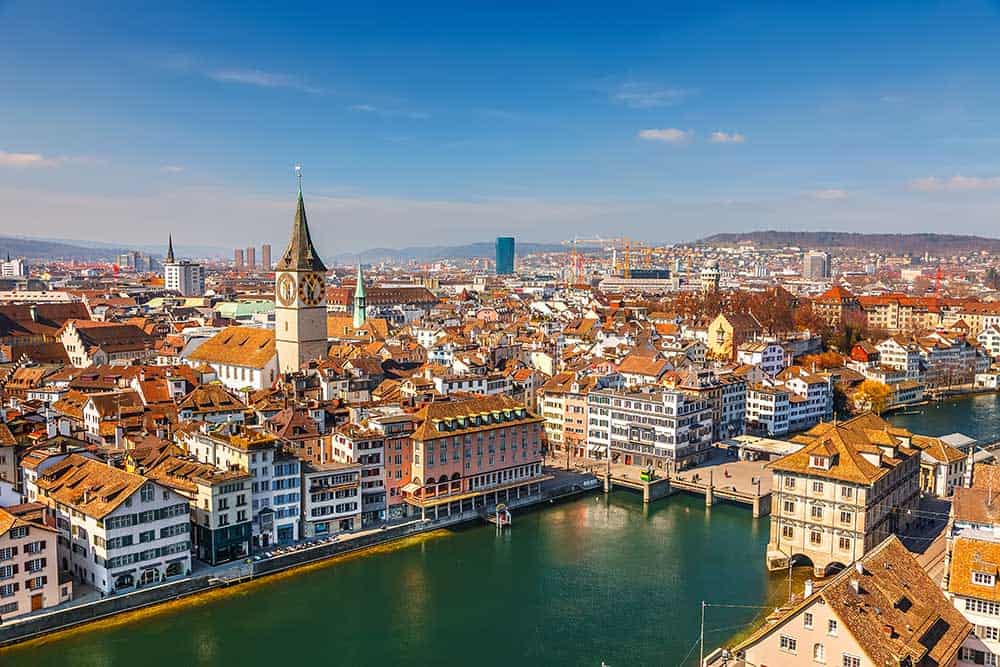 Zurich is a walkable city divided into twelve districts. Locals and tourists alike tend to either walk, cycle, or take public transport between destinations. In fact, over half the residents take the tram or bus for their daily commutes.

Most of the historic and cultural sites are found near the centre of Zurich. The outer urban areas contain a mixture of residential, commercial, and industrial zones. These districts are broken up by numerous public parks, adding “green lungs” to the city’s landscape.

The best areas to stay in Zurich include:

✔ Best area to stay in Zurich for culture & historic sightseeing

As with dozens of other old cities across the globe, Old Town (Altstadt) is the heart of Zurich. Altstadt is located in District 1, covering both sides of the river, but people typically refer to the area on the west bank as “Old Town.” 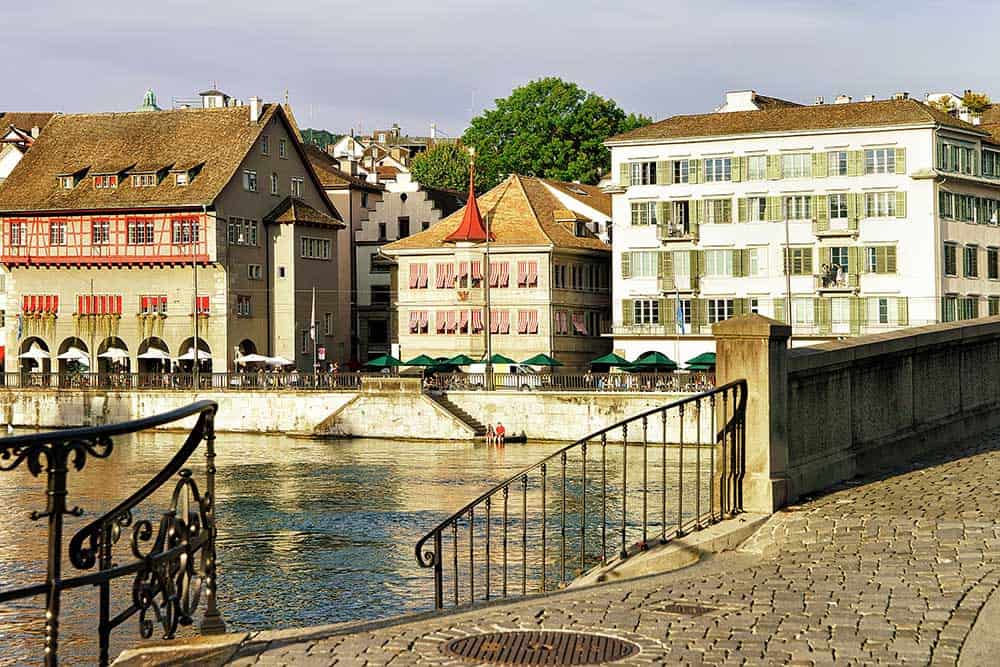 Old Town is home to some of the top things to do in Zurich, including the iconic Paradeplatz and the historic Lindenhof Hill.

The top of the hill offers views of the rest of Zurich, including most of Old Town. You’ll also find the ruins of a Roman fort and a lovely public square with many places to relax and rest your legs.

Staying in Old Town places you near the ancient churches that people tend to associate with Zurich. It’s a city with lots of medieval monasteries and cathedrals and most of them are found in or around Old Town.

Grossmunster, Fraumunster, and St. Peter are all within walking distance of each other. You’ll also have access to a few museums and the city’s town hall.

Overall, Old Town has the most historic buildings and landmarks and is the best overall choice for accommodations. You’ll feel as if you’re in medieval times as you wander around the narrow alleyways and browse the little shops.

If you want to compare the best hotels in Zurich, start your search in Old Town. It’s the most popular tourist destination in Zurich, requiring hotels to deliver world-class treatment and amenities. Of course, the prices are also a little higher.

To the east of Lake Zurich, you’ll discover the laid-back Seefeld neighbourhood. This area is known for its sprawling promenade by the lake.

If you enjoy fun in the sun or being close to the water, you’ll have a good time in Seefeld, but there isn’t much else to do. In fact, it’s easy to overlook this neighbourhood when planning out your Zurich itinerary. 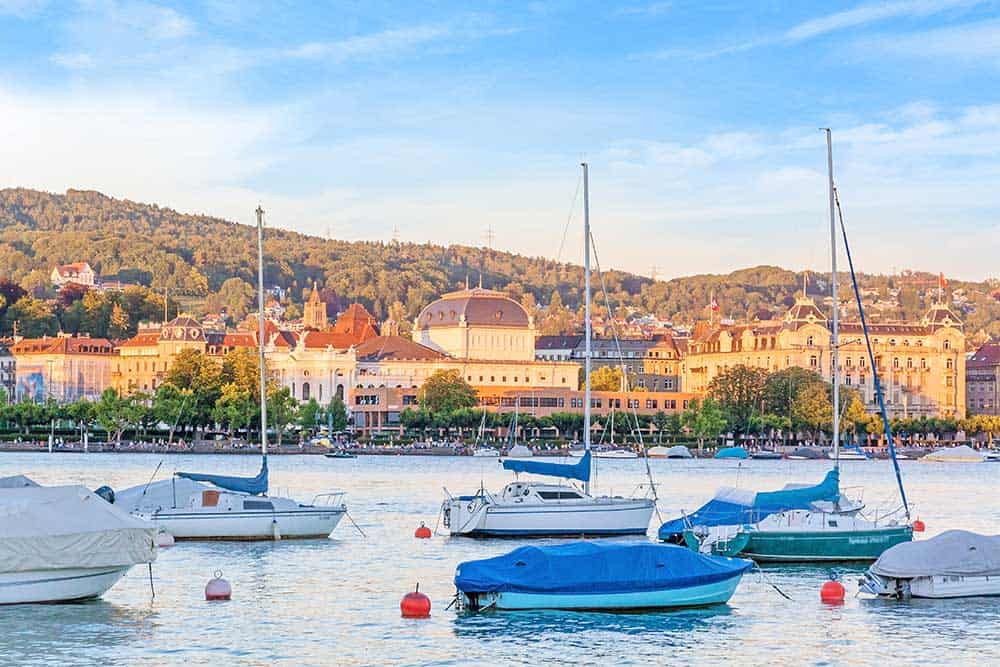 The lake is the main reason to choose Seefeld when nailing down where to stay in Zurich. All types of shops line the lakefront. While it doesn’t have lots of historic sites, it has many great restaurants. The fine dining options in Seefeld will leave you wanting to extend your stay.

It is also quieter compared to other areas of the city, making it a top choice for families and those wanting to escape the typical tourist traps.

While the area doesn’t have a lot of attractions besides the lake, it does have a few landmarks. The Zurich Opera House is found in the centre of Seefeld. Built in 1891, it’s still active. You can check out daily performances throughout the year.

If you get tired of the lake, walk to Old Town. Grossmunster and Fraumunster are just a little over a kilometre away.

The Seefeld area has lots of apartments and hotels to choose from. Most of the hotels fall into the mid-range category, featuring comfortable double rooms and locations near the lake. While Seefeld is not the most visited neighbourhood, the hotels still fill up quickly.

✔ Top-rated neighbourhood to stay in Zurich for shopping & bar-hopping

Niederdorf is one of the most pedestrianised parts of Zurich. It covers part of Old Town, being located east of the river between the Central Square and Bellevue Square. It’s also within District 1.

As with Old Town, this neighbourhood takes you back in time. The winding streets are lined with old buildings and open up to small public squares surrounded by little cafes and shops. 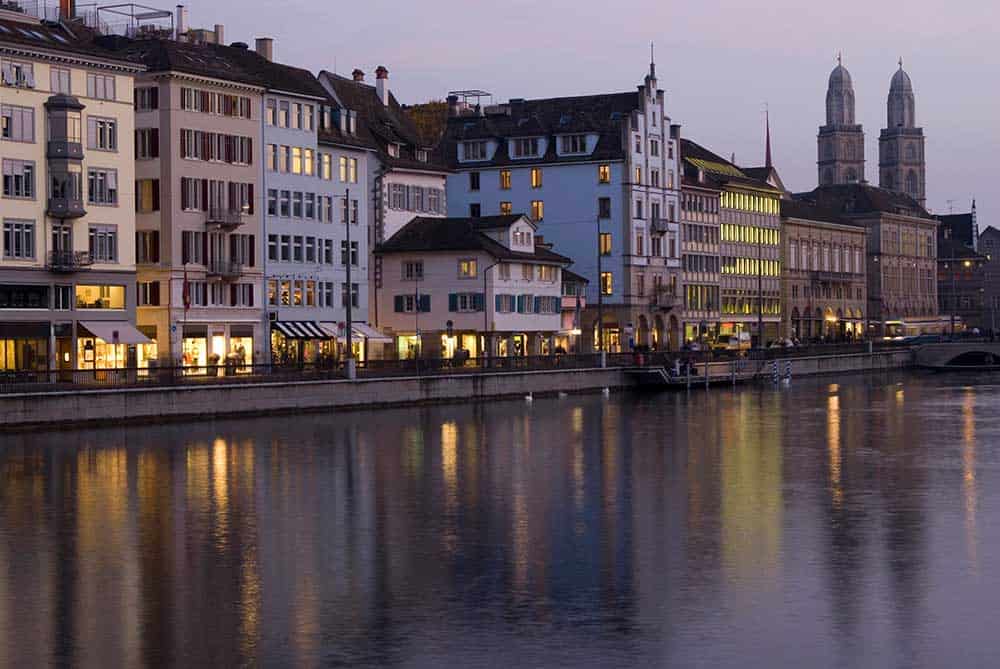 Like Old Town, Niederdorf is a walkable neighbourhood with lots of opportunities for shopping and dining.

At night, this area becomes incredibly lively. Niederdorf combines the history of Old Town with adult entertainment. You’ll likely spot a few of Zurich’s seedier moments as you check out the trendy bars and clubs near the river.

During the day, Niederdorf is a little more family-friendly. Spend your time browsing the pedestrian shopping streets with a wide variety of goods. On some streets, you’ll find high-end shops. On other streets, you’ll discover rows of thrift shops and art galleries.

Niederdorf sits between Old Town and Seefeld. You can walk a few blocks south to reach the lakeside attractions or cross the river to reach the historic churches in the city centre.

Niederdorf offers an assortment of hotels. You’ll find accommodations inside historic buildings and modern rooms in newly-built hotels, all within walking distance of the main attractions in Old Town and Seefeld. Due to the popularity of this neighbourhood, you should try to book your stay a few months in advance.

While Niederdorf has earned a reputation for its clubs and lively atmosphere, Langstrasse (Long Street) remains the centre of nightlife in Zurich. It has a seedier reputation as the home of numerous brothels, drug dealers, and above-average crime for Switzerland.

Langstrasse is the main red-light district of Zurich, but it’s become quite a bit less raunchy over the past decade. It’s now the main district for international cuisine and luxury shopping.

Langstrasse is a melting pot, with one of the most diverse populations in Zurich. You’ll still find strip clubs and sex workers, but the variety of shops and bars has increased in recent years.

This district is hip, vibrant, and loud. It’s not the best area for families, but people seeking entertainment can have a good time here.

The colourful Langstrasse neighbourhood has plenty of urban charm. Besides the nightlife, it offers international cuisine as 42% of the residents in this area are foreigners. Catering to the multicultural population, you’ll find a wide variety of restaurants in Langstrasse.

The only drawback is the distance from the other neighbourhoods. If you stay in Langstrasse, you’ll likely need to take the bus or tram into the city to go sightseeing.

The city has cleaned up Langstrasse in the past couple of decades, adding several high-end hotels to the area. You’ll also find a few budget options, along with apartments and hostels. In fact, some of the best rates are found in the Langstrasse neighbourhood.