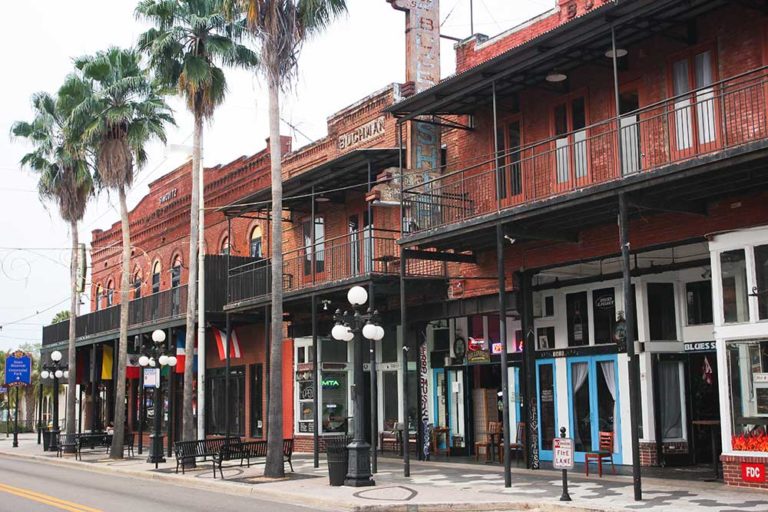 Dubbed a National Historic Landmark District, Ybor City gets its name from cigar magnate Vicente Martinez-Ybor, a Spanish immigrant who opened Tampa Bay’s first cigar factory in 1886. Over the next 50 years, the thriving cigar industry defined Tampa, enough to garner it the nickname Cigar City.

Today, Ybor City still teems with historic buildings hiding some of Tampa Bay’s trendiest restaurants, cafes, clubs, and entertainment venues. History buffs will also find a slew of interesting things to do in Ybor City, including visiting museums like Ybor City Museum State Park where you can dig into the neighborhood’s rough-and-tumble beginnings.

Looking for more ideas for your trip? Check out our Florida State Travel Guide for more recommendations on when to visit, where to go & what to do!

Things to do in Ybor City, Tampa

Not sure what to do in Ybor City? Start your day with a stroll along 7th Avenue. The main street in Ybor City Historic District doesn’t just peer into the neighborhood’s past, but at the modern history of the Tampa Bay area. 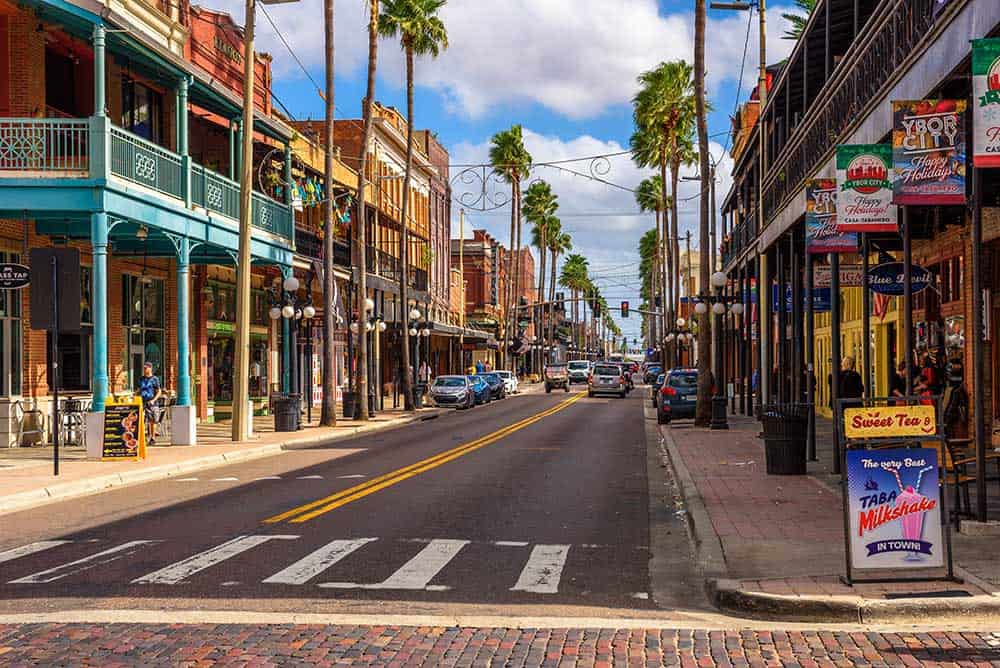 The best way to experience 7th Avenue is to grab a cup of coffee and wander aimlessly. Snag a seat under the shade of palm trees to admire its architectural history before fuelling up with the neighborhood’s famed Cuban toast. There’s also an eclectic selection of restaurants here, including the original location of the famous Columbia Restaurant.

If you need to stock up on travel essentials, duck into Ybor City Supermarket. The vintage retail shop harkens back to the city’s early days. It offers a wide range of products, covering everything from groceries to cigars to souvenirs.

When you’ve finished up at the Ybor City Supermarket, indulge your inner hipster and shop for vintage clothing at the Revolve Clothing Exchange, located next door.

Need a break from historic sightseeing? Scoot over to Centro Ybor. One of the neighborhood’s most popular malls, Centro Ybor is packed with everything from retail shops to restaurants & bars.

After an afternoon of shopping or watching a movie (with a cocktail!) at the cinema, indulging in delicious food & drink at one of the dozen restaurants or so restaurants at Centro Ybor. 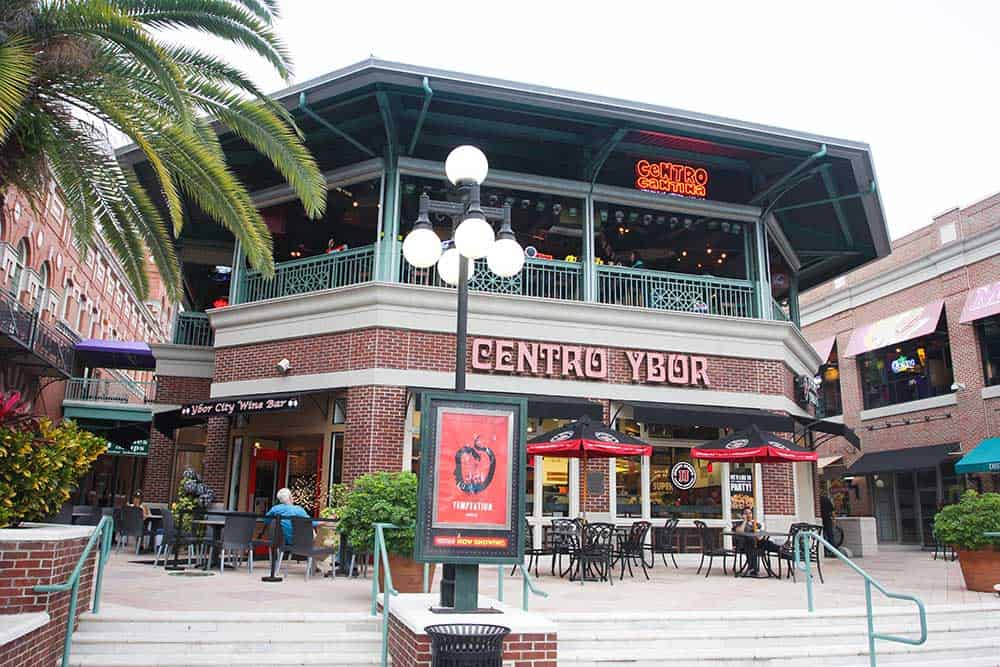 Asian-food connoisseurs will love slurping down ramen at the Asiatic Street Food + Noodle Bar. Wash it down with some of the city’s finest suds at the popular Tampa Bay Brewing Company brewpub or The Brass Tap.

For an evening of laughs, save time in your itinerary for Tampa Improv Comedy Theater. Occupying a restored theater with balcony seating, Tampa Bay’s most popular improv comedy club is the perfect place to launch into an evening of Ybor City nightlife hijinks.

Celebrating the city’s cultural heritage, Ybor City Museum State Park is one of the coolest places to visit in Ybor City. Located on 9th Avenue, the museum is built on the former site of the 1920s-era Ferlita Bakery, a local breakfast hot spot among Cuban cigar workers. 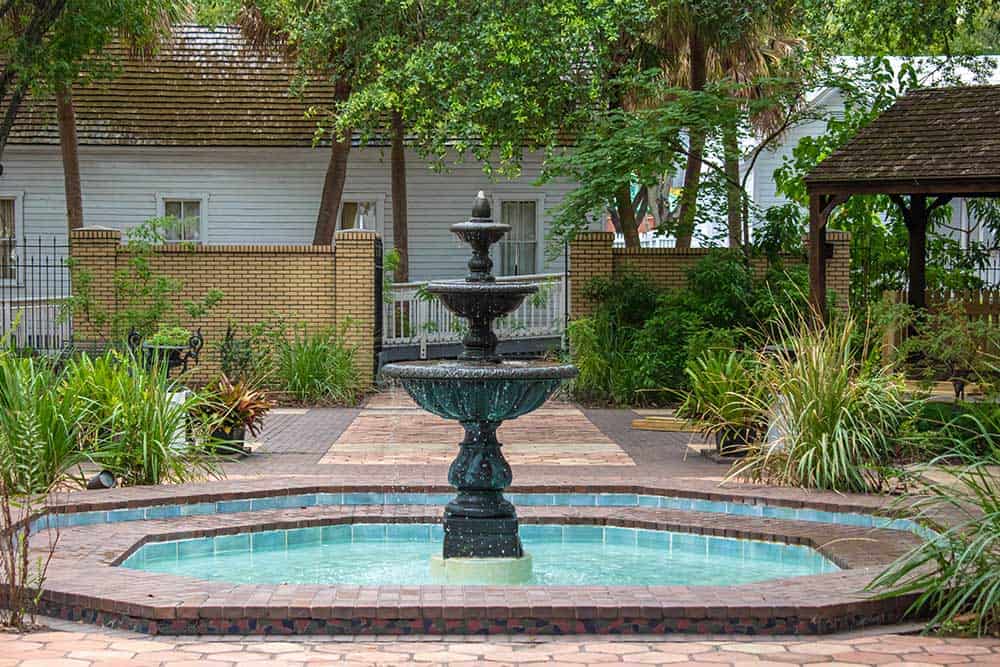 The main exhibits at the Ybor City Museum detail everything you need to know about how the district made Tampa the “cigar capital of the world.” The district’s entire history is covered, from its first cigar factories to the decline of Tampa’s cigar industry.

You’ll also get a chance to check out the state park’s Mediterranean-style garden and a casita (small house) once used to house cigar factory workers.

If you’re a history buff, be sure to make time in your itinerary to check out Ybor Square. The building was the site of Tampa’s first cigar factory, the Martinez Ybor Cigar Factory Complex.

Built in 1886, the historic cigar factory building was pivotal in the neighborhood’s development, producing millions of cigars a year and employing thousands of workers. 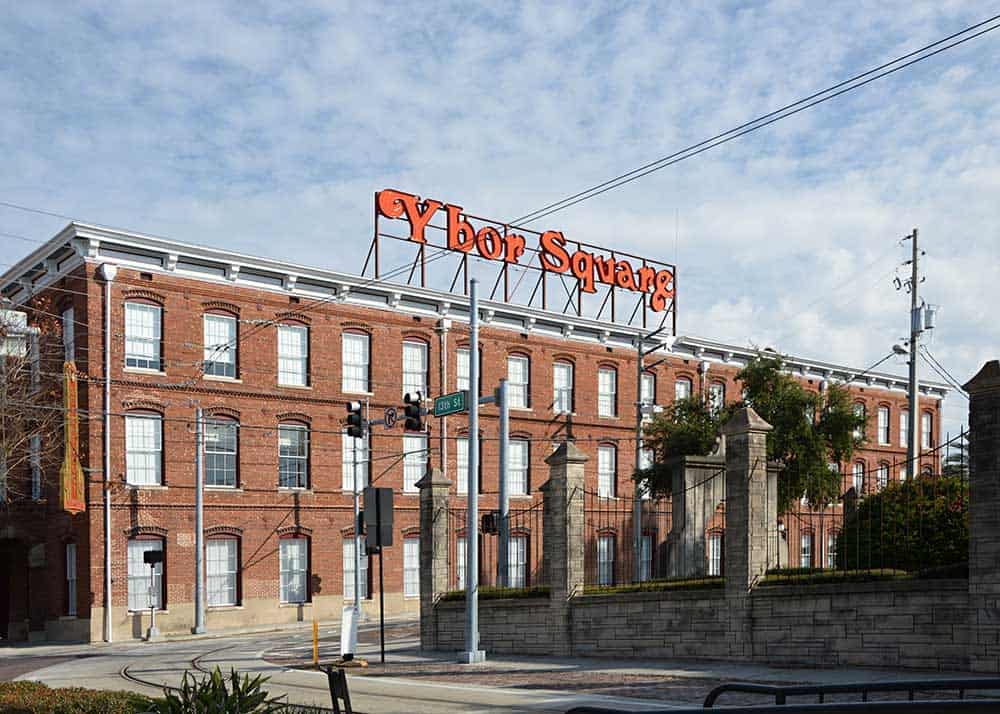 As Tampa’s cigar industry declined following the Great Depression and World War II, the factory began to take on new life. Eventually, as shops and restaurants moved in, the building changed its name in the mid-1970s to Ybor Square.

Since 2010, Ybor Square has been owned by the Church of Scientology. These days, it’s less a tourist attraction than an events space for the church. Nonetheless, it’s worth checking Ybor Square to admire its historic architecture and for a quick photo op.

Looking to add a visit to Cuba to your Florida road trip? It’s entirely possible with a stop at Jose Marti Park. Located on the corner of 8th Avenue and 13th Street, the park is officially Cuban-owned land. But, good news for you: No passport is required for entry! 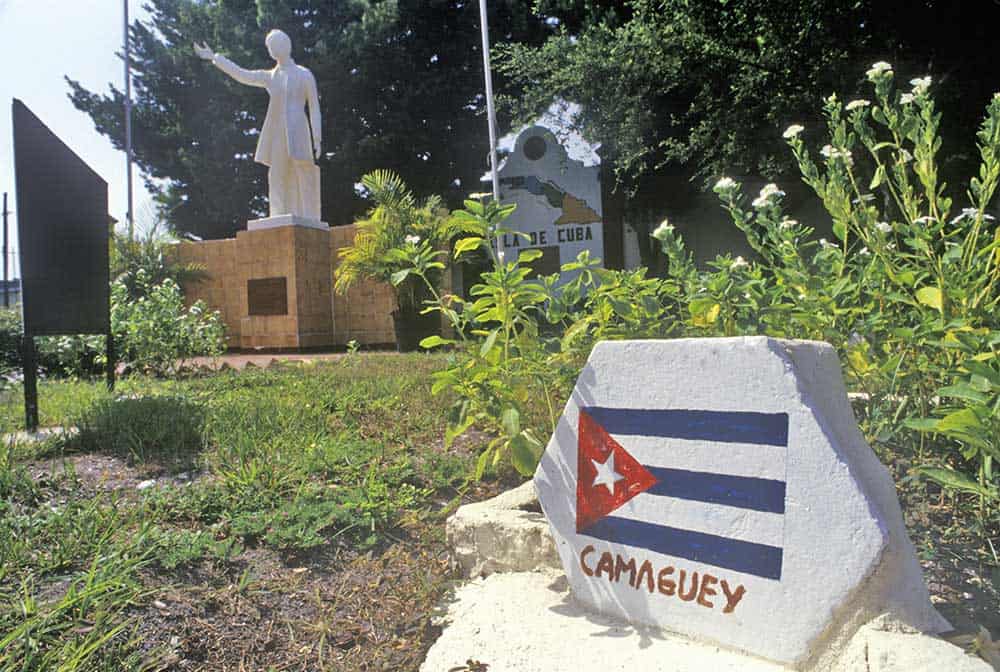 Jose Marti Park celebrates Cuban poet and revolutionary Jose Marti, who led the insurrection against Spanish rule in Cuba in the late-1800s. Living in exile, Marti frequented the Tampa Bay area. He found a  particularly powerful ally in Vicente Martinez-Ybor, who supplied moral and financial support for his cause.

Besides a small statue of Jose Marti, there’s little to see & do in this compact park. Jose Marti Park is open from 8 am to 7 pm daily.

Sprawling 2.5 acres in the center of historic Ybor City, Centennial Park is a wonderful spot to catch a breather while learning about the history of the neighborhood. Spread throughout the park are historic plaques, monuments, and statues that sketch out Ybor City’s past. 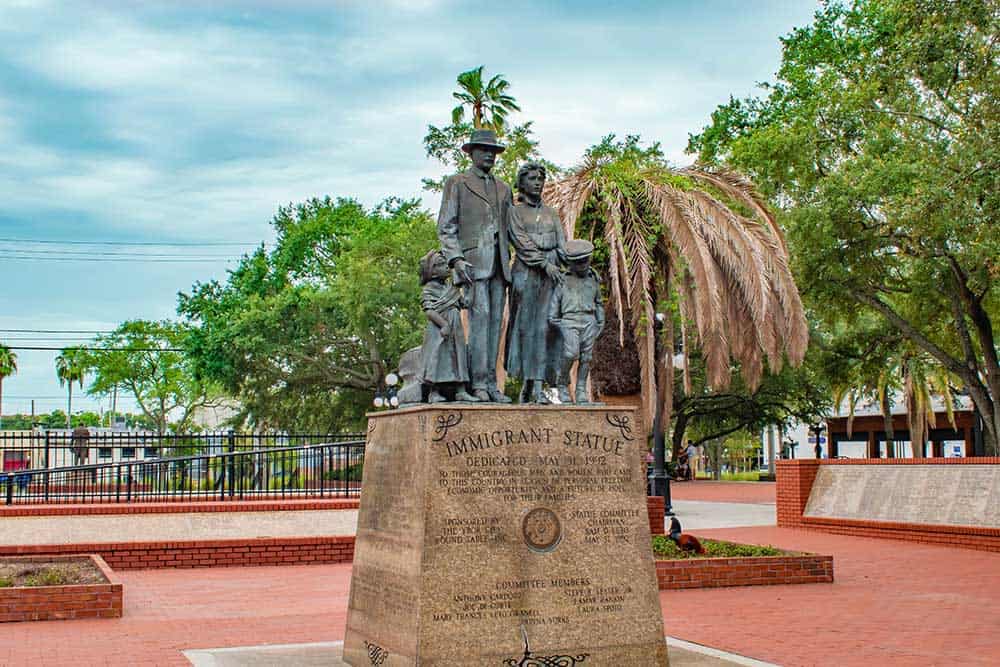 If you’re visiting Centennial Park on the weekend, be sure to check out the Ybor City Saturday Market. Every Saturday, over 70 vendors gather around the park to peddle fresh produce, art & crafts, jewelry, cigar products, and food items. It’s a fun event for a break from the typical Tampa sightseeing activities.

Centennial Park also hosts several special events throughout the year, including the Festa Italiana. If you’re into art, visit the nearby Ybor Art Studio for a glimpse at the local art gallery scene.

Where you’re a cigar aficionado or just mildly curious, carve out time for a visit to Tabanero Cigars. The vintage cigar shop is known for carrying some of the finest cigars in the United States, handmade by Cuban-born artisans using age-old traditions. 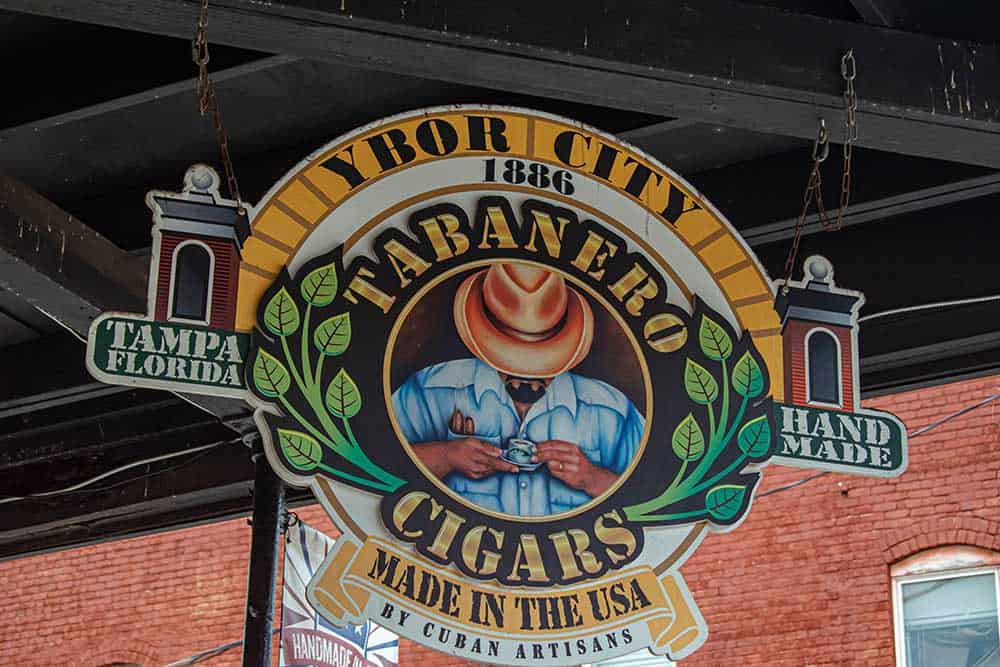 Tabanero Cigars is more than just a simple cigar shop though. On your visit, you can also enjoy a tour of the cigar factory, including live demonstrations of cigar-making.

No sport was more important to the Tampa Bay area than baseball. To see the impact of the game on the community, slide into home at the Tampa Baseball Museum at the Al Lopez House. With its exhibits, the popular museum celebrates more than 125 years of Tampa Bay baseball history.

The Tampa Baseball Museum occupies the former casita of Al Lopez, the city’s first major league baseball player and an MLB Hall of Famer. Besides learning more about Lopez, visitors will learn all about the development of baseball in Tampa.

Located on Nebraska Avenue, the Centro Asturiano de Tampa is a historic social club built for Spanish immigrants from Asturias. The center is housed in a beautiful Beaux-arts and Classical Revival building dating back to 1914. It offers yet another glimpse at the remarkable architectural history of Ybor City. 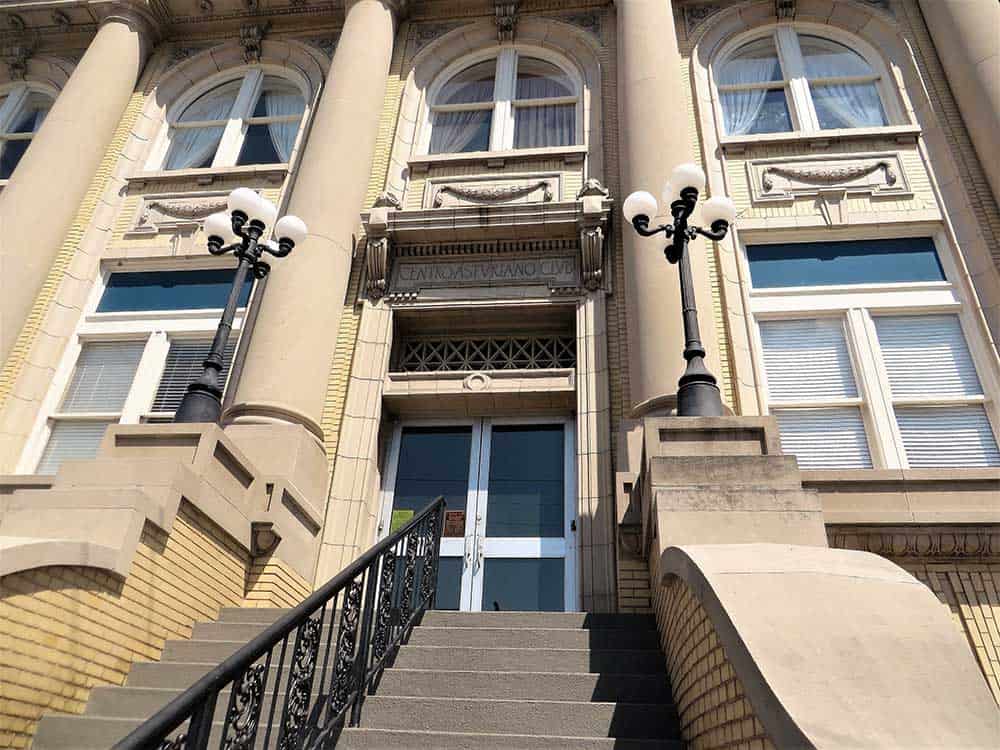 While the club’s membership has declined, the Centro Asturiano de Tampa is now a popular local event venue. It hosts everything from weddings to birthday parties to corporate events.

Where to eat & drink

Thanks to the influences from its Spanish, Cuban, and Italian immigrants, Ybor City is one of the most interesting places to eat & drink in Tampa.

Start your morning off with a strong Cuban coffee from one of the district’s many coffee shops. Located on E. Seventh Avenue, the Blind Tiger Cafe is a local favorite for enjoying a cup of coffee, freshly roasted of course!

For a taste of history, slide up to La Segunda Bakery on North 15 Street. Open since 1915, the historic bakery is famed for its authentic Cuban bread along with a fantastic selection of cookies and pastries.

Got a hankering for Spanish food? Don’t miss out on a visit to Columbia Restaurant. Opened in 1905 by Cuban immigrant Casimiro Hernandez, Columbia Restaurant is Florida’s oldest restaurant and the largest Spanish restaurant in the entire world. It also serves a small smattering of Cuban food, including their popular Cuban sandwich. 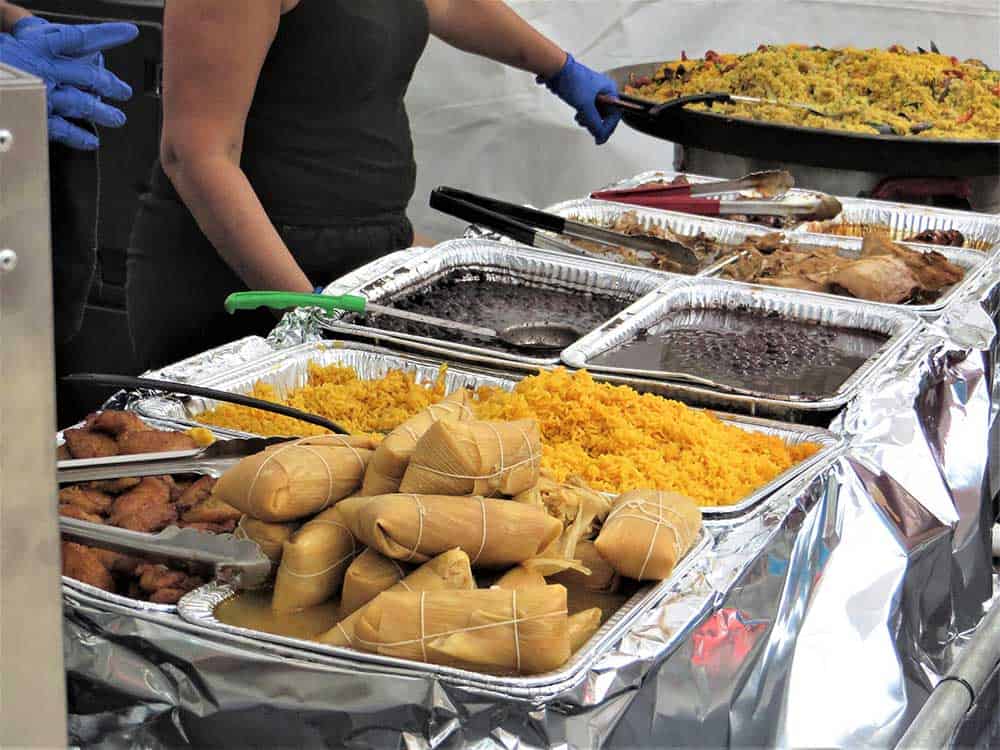 If you want to dig into the neighborhood’s palate, hop on a tour from Ybor City Food Tours. A great introduction is the Historic Ybor City Food and Drink Walking Tour, offering six food & drink tastings.

Craft beers fans will also find plenty to love as they walk the streets of Ybor City. Start with the Tampa Bay Brewing Company in Centro Ybor for a flavorful and juicy IPA. Or sample flights with a background of street art at the Coppertail Brewing Co. on E. 2nd Avenue. For something a little less traditional, Cigar City Cider and Mead to enjoy one of its unique sweet and sour brews.

As Ybor City is Tampa’s entertainment district, there’s plenty available here for a fun night on the town. Located in a historic theater, The RITZ Ybor is one of Tampa’s premier event venues. Check out upcoming events at their official website.

For a more classic Ybor City nightlife experience, dance the night away at Club Prana or enjoy pub grub and drink deals at the pirate-theme Gaspar’s Grotto.

Although it’s one of Tampa’s most popular sightseeing spots, there isn’t a huge selection of hotels in Ybor City. The few accommodation options, however, sit among some of the top-rated Tampa hotels. 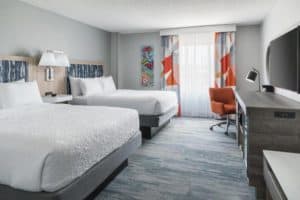 To experience the buzz of downtown and the historic district, there’s no better choice than this recently renovated hotel. Aside from its free transfer service to downtown Tampa, the lodgings offer excellent amenities, including an outdoor pool and fitness center. Free breakfast is also included. 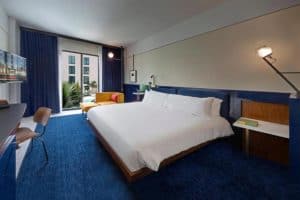 Immerse yourself in the area’s history with a stay at the Hotel Haya. The Cuban-inspired hotel charms with its sash windows and balconies overlooking 7th Avenue. Visiting in summer? You’ll enjoy cooling off with a dip in the courtyard pool before settling at one of the three on-site restaurants for an evening of local craft beers and international cuisine. 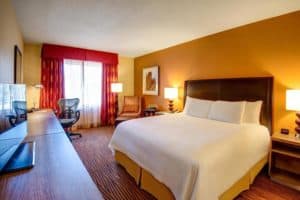 Just a block from Centro Ybor and two blocks from 7th Avenue, this popular hotel is the perfect choice for both shopaholics and foodies. Rooms are spacious and modern, offering guests refrigerators and microwaves. You’ll enjoy a wealth of amenities here, too, including an on-site restaurant, fitness center, outdoor pool, and hot tub.