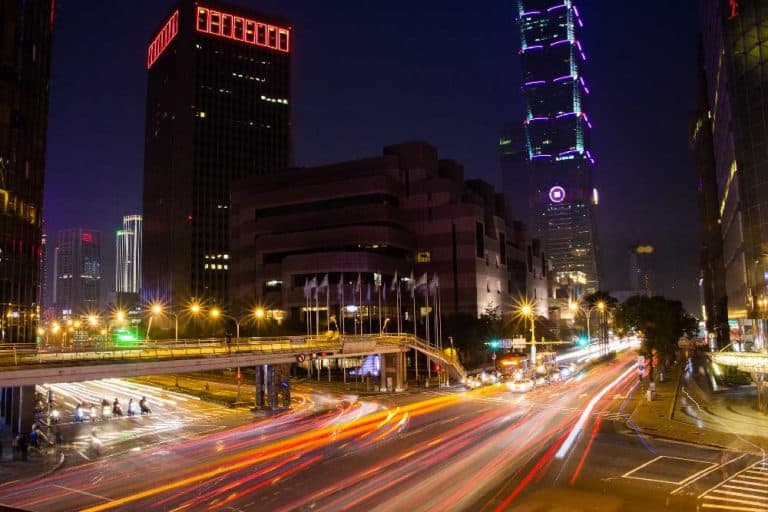 Want to visit Taiwan’s capital of Taipei in style? Batten down in one of the best luxury hotels in Taipei!

Taipei is known for its value-laden luxury accommodations. Compared to other cities in East Asia, your travel budget will stretch further in Taipei.

For the cost of a mid-range hotel elsewhere, you can score a room in one of the absolute best places to stay in Taipei! It’s the perfect way to start a hassle-free & luxurious Taiwanese holiday.

Not sure where to start searching? Here’s a quick introduction to the best 4-star & 5-star luxury hotels in Taipei…

Looking for more ideas for your trip? Check out our other hotel & accommodations guides and our Taipei Travel Guide for recommendations on when to visit, where to go & what to do!

An elegant and palatial lobby sets the stage for a luxuriant stay at the top-notch The Okura Prestige Taipei.

This world-class hotel heads the list of the best 5-star hotels in Taipei. The property fuses modern style with classic Oriental motifs. It’s an accommodations experience unlike any other in the city.

Settle into your room at The Okura Prestige Taipei. Treat yourself to high-flyin’ city views before turning in for the night on the hotel’s über-comfortable beds. All the rooms here feature bucketloads of space. They even toss in a sitting area with a sofa for a little relaxation time. 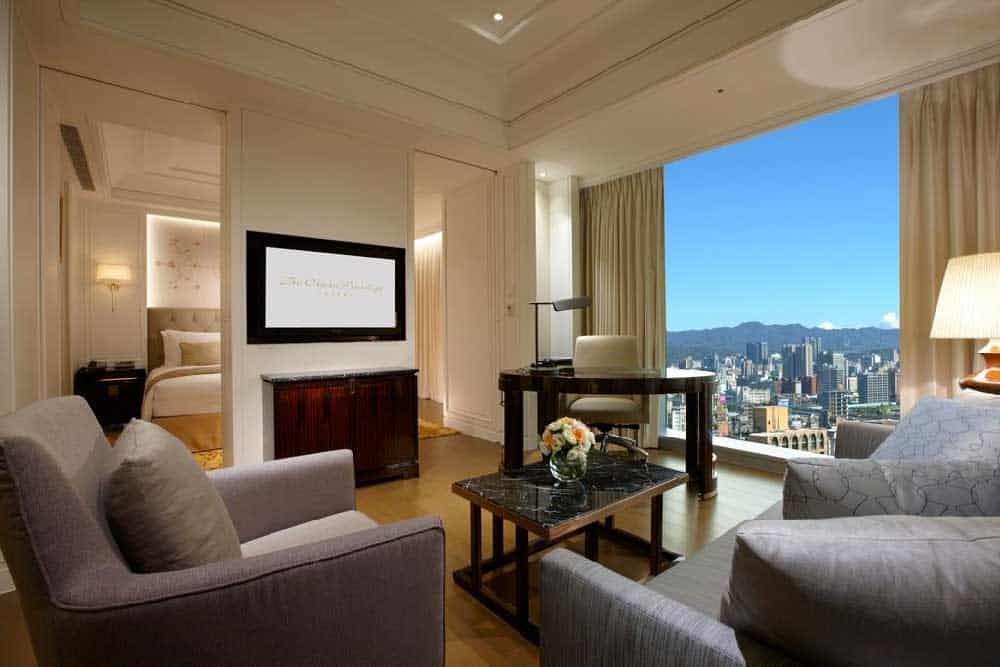 In the dead heat of summer in Taipei, you’ll love scooting up to The Okura Prestige’s splendid rooftop pool. Pull up a lounger and chill out to the sights and sounds of Taipei as you soak in the big city views.

Not that there’s any shortage of food in Taipei, but The Okura Prestige Taipei has a few surprises in store for gourmands. Grab a fancy Cantonese meal at Tok-Ka-Lin or fine Japanese at Yamazato Restaurant. Both are renowned for their decadent flavours. (And in a city that knows its food, this is no small feat!)

Before you even step into your room, Mandarin Oriental Taipei proves itself to be ahead of the pack among the best luxury hotels in Taipei.

The experience begins in strolling up to the hotel. The Mandarin Oriental shines with its unique European façade. It’s flagged by columns, archways, and detailed stone work. The façade’s an easy distraction from Taipei’s normally sober architectural scene.

The Mandarin Oriental Taipei’s smashing looks don’t stop at its exterior. The European motif continues inside. It’s fused with classic Oriental design to remind us of its prime East Asian location.

The hotel’s rooms are spacious and elegant. They drip with traditional and modern sensibilities. The design adds an air of comfort and sophistication to your stay. 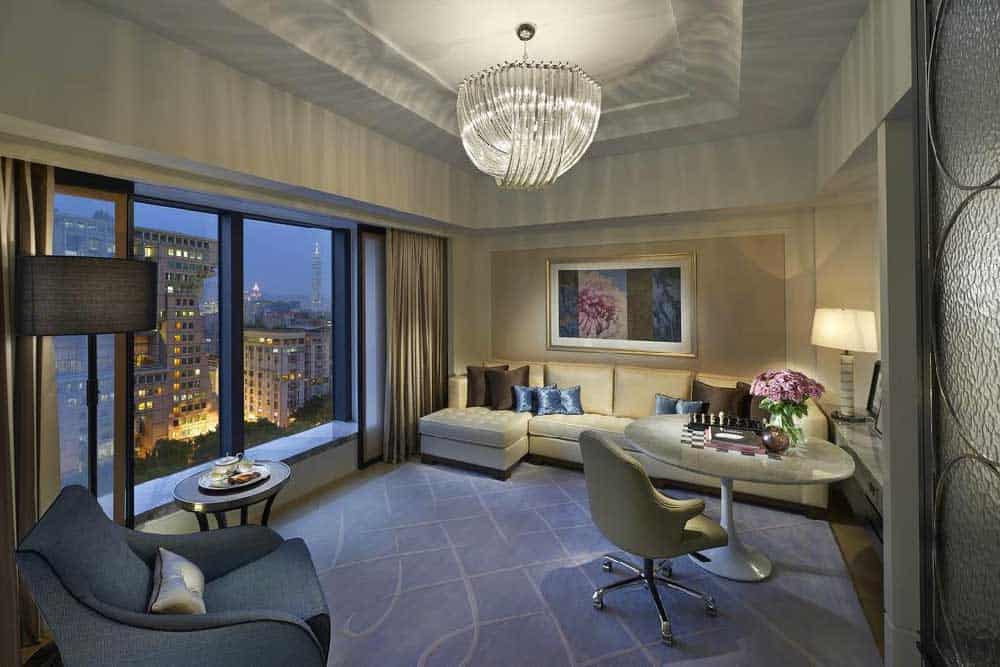 Outside the rooms, Mandarin Oriental Taipei charms with world-class amenities. They’re topped by its outdoor pool oasis that betrays its urban setting.

Elsewhere in the hotel, whisk your tastebuds to another time & place at the delightful on-site restaurants.

Draw yourself into the Mandarin Oriental Taipei’s culinary world with the fine Cantonese cuisine of Ya Ge. Or chow down on inspired Italian home cooking at Bencotto. For Gallic flair, embrace the French brasserie stylings of Café Un Deux Trois.

Hotel Proverbs Taipei is a hotbed of style and sophistication. It blends elegant and rich retro designs with a modern touch. It’s got a look unmatched anywhere in Taiwan’s capital.

The stunning Hotel Proverbs is one of the best 4-star hotels in Taipei. From the dining areas to the guestrooms, the property revels in fine details. 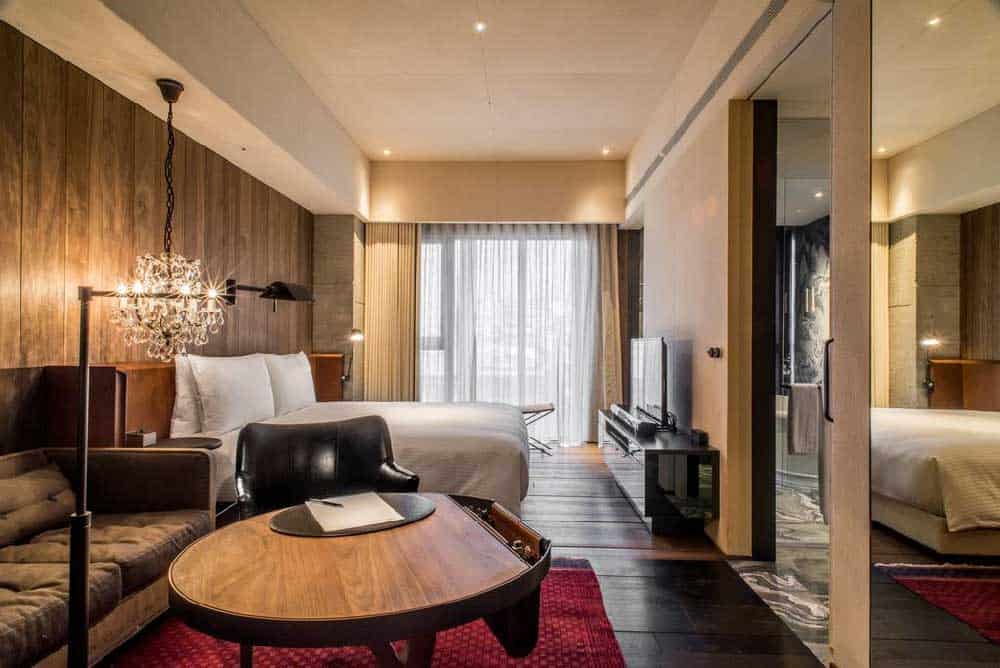 Besides relaxing in the well-appointed rooms, Hotel Proverbs Taipei will draw you in with its amenities. At the hotel’s main restaurant, TK Seafood & Steak, take a break from the usual Taiwanese fare. Enjoy a taste of prime wagyu beef or fresh local seafood accompanied by a fine wine.

The luxurious rooftop swimming pool charms with vistas over Da’an District. It makes a compelling case to spending the evening in-house.

Looking for a top-tier Taipei 5-star hotel? As expected from one of the best luxury chains on the planet, W Taipei pulls out all the stops.

W Taipei delivers a experience of pure sophistication & relaxation. There’s hardly a better place in Taiwan’s capital to call your temporary home. This concept hotel impresses with chic über-modern designs. They’re as visually stunning as they are functional.

Entering your room, you’re greeted by expansive floor-to-ceiling windows. They shine in broad city views of Taipei and the surrounding mountains.

For an dash of modern Taiwan, book yourself into a Spectacular King or Fantastic Suite King Room. Gaze out your window as Taipei 101 struts its stuff. Relax to the views as you enjoy your room’s extra like an in-room BOSE sound system and Bliss® spa tub. 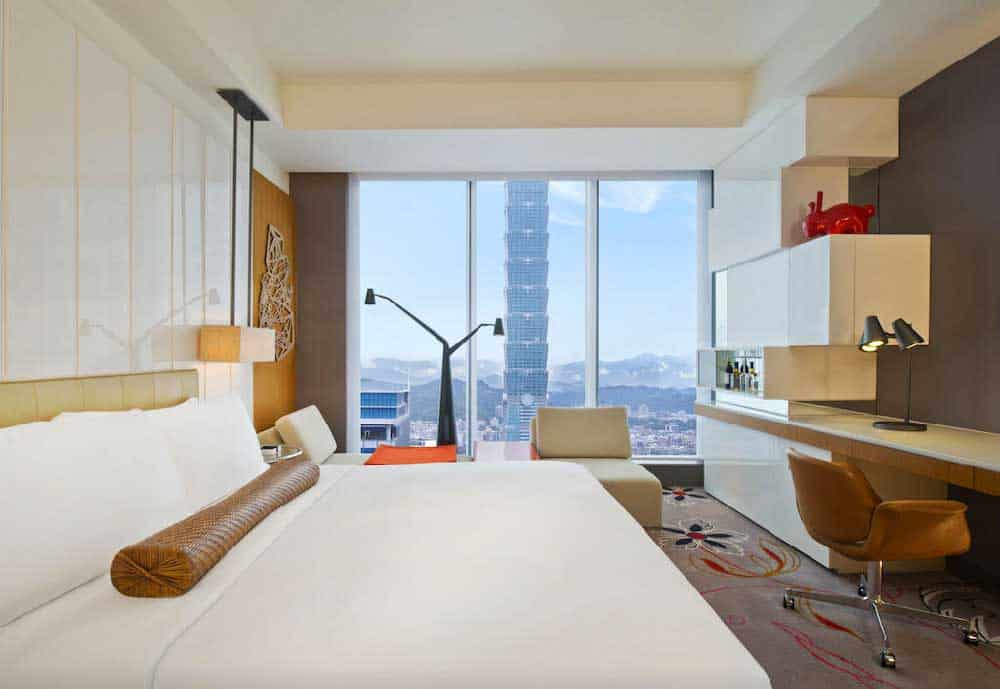 Keep your stay interesting by cooling down to Taipei city views at the outdoor pool. Or numb your stress away at the blissful AWAY® spa. It’s the perfect way to relax after a long day of sightseeing.

Need a break from Taipei’s regular street food fare? Foodies can settle in at the W Taipei’s on-site restaurant, YEN. The restaurant doles out fine dining modern Chinese. It’s curated by Wo Hoi Ming, a celebrated chef from Hong Kong.

End the evening at the Woobar Night Club. Stroll around with a trendy cocktail in hand as you slip out to the WET® Deck open terrace for more views over Taipei.

With a name borrowed from French, what awaits at Hotel Éclat Taipei shouldn’t be surprising. The hotel glows with a modern Euro-inspired elegance.

Throughout this 5-star boutique hotel, bright & regal colours dominate. They accent both classically opulent and contemporary touches. The design aesthetic here is innovative and unlike anywhere else in Taipei. 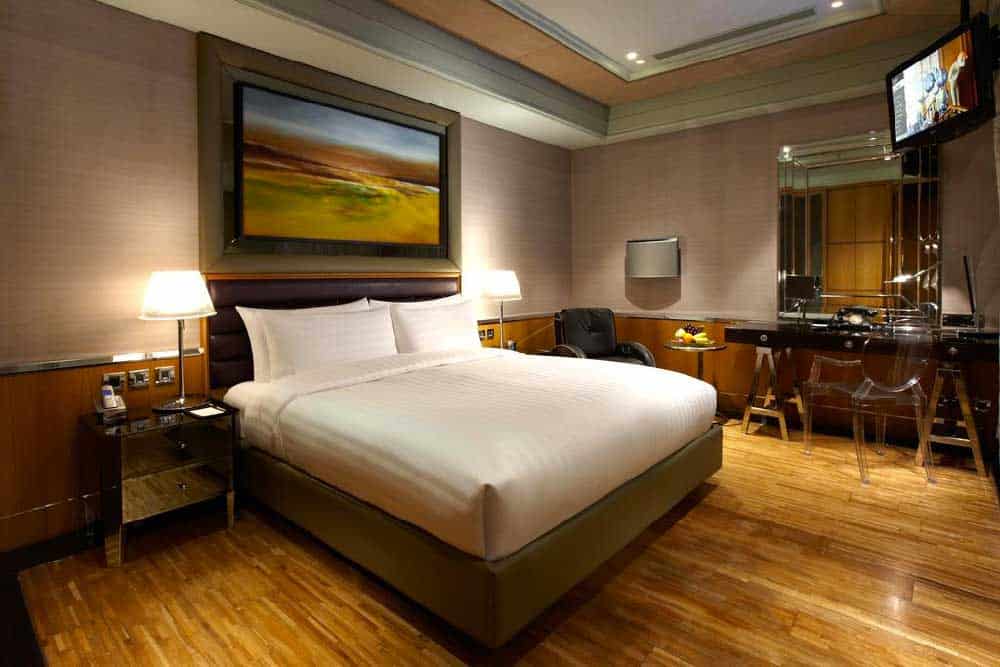 Rooms at Hotel Éclat Taipei are both spacious and stylish. The walls are lined with original artwork, adding sophistication. The hotel also boosts the value with its luxurious extras. Included are rain shower heads, Grown Alchemist toiletries, and down duvets for your comfort.

For some evening relaxation, put your feet up at the Éclat Lounge, the on-site bar & restaurant. Enjoy a drink among its unique collection of eastern & western artwork.

Prepare to be dazzled as you step into the wonderful Shangri-la’s Far Eastern Plaza Hotel Taipei.

This world-class property is, undoubtedly, one of the best 5-star hotels in Taipei. The Shangri-la draws inspiration from China’s Song Dynasty (960-1279). Yet, still, it holds strong to modern sensibilities. 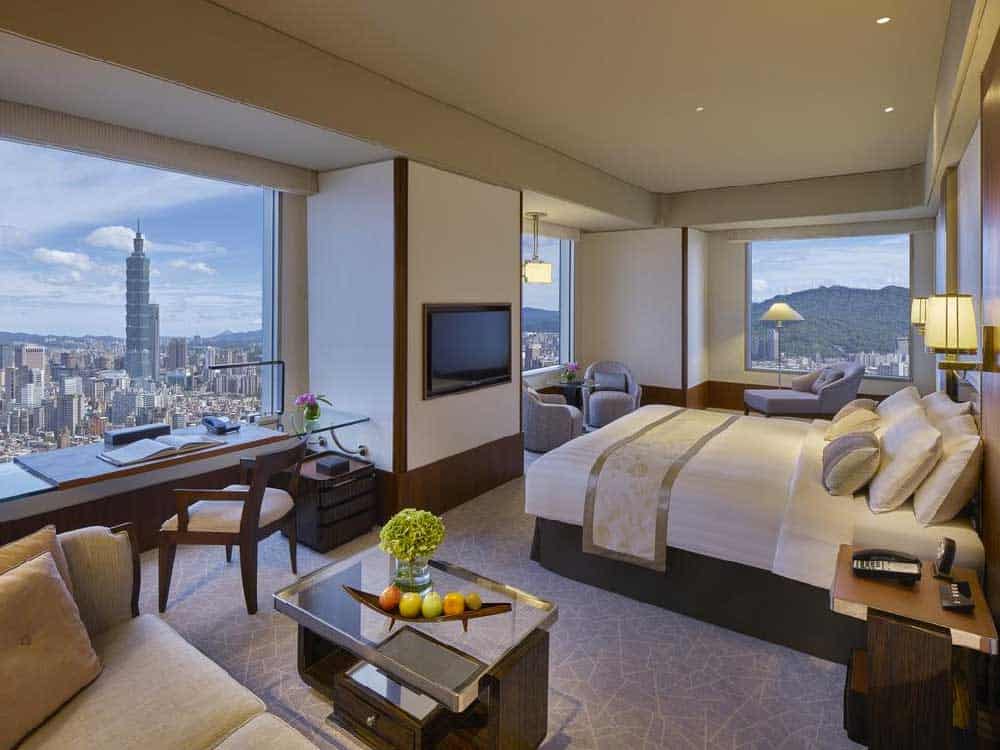 The strength of the Shangri-la’s Far Eastern Plaza Hotel Taipei doesn’t stop at the guestrooms. For relaxation, there’s an on-site spa, features soothing massage treatments. There’s also a health club to keep up your daily fitness.

Five on-site restaurants deal in mouth-watering delicacies. Take a trip to Tuscany with the delectable Italian cuisine of Marco Polo Restaurant. Or stick with East Asian cuisine and enjoy the saucy Shanghainese of Shanghai Pavilion Restaurant. Fans of sushi can dabble in the fine Japanese of ibuki by Takagi Kazuo.

Looking for a chance to get up-close-and-personal with Taipei 101? Lay your weary head at Grand Hyatt Taipei.

This 5-star property is located in the heart of the financial district of Xinyi. The Grand Hyatt delights guests with a whole slew of top-notch amenities. It’s no wonder that it slots in among the best luxury hotels in Taipei! 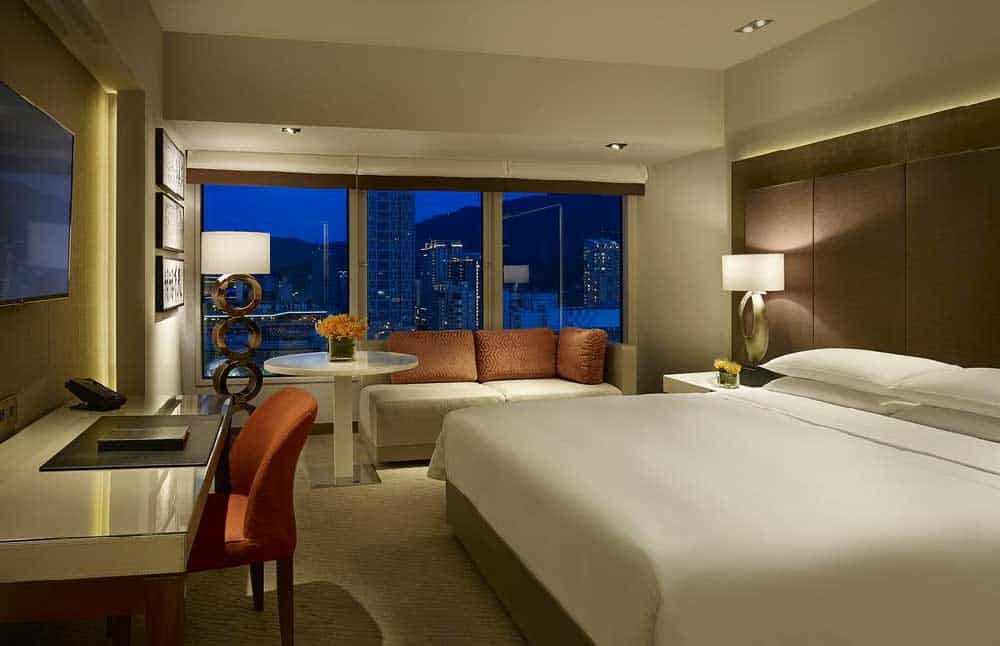 The on-site restaurants at Grand Hyatt Taipei dabble in everything from Chinese and Japanese to European. If they don’t tickle your fancy, cool off to a quiet dip in the outdoor pool or a steam bath in the sauna area. An evening cocktail at laid-back Cheers or spirited ZIGA ZAGA is similarly relaxing.

Regent Taipei is spectacular enough to land itself on the Conde Nast Traveler’s list of the “World’s Best Places to Stay.” Need we say more?

This 5-star hotel is the perfect Taiwanese urban retreat. It’s situated in the heart of Taipei City in Zhongshan District.

Regent Taipei goes beyond the norm of many of the best 5-star hotels in Taipei. It delights guests, not only with its swanky rooms, but with its world-class amenities.

The splendid rooms at Regent Taipei are forged with modern simplicity. They’re spacious and feature luxurious extras. To relax, you’ll enjoy chillin’ the deep soaker tubs. For the ultimate night’s rest, the hotel offers premium bedding, and a pillow menu. 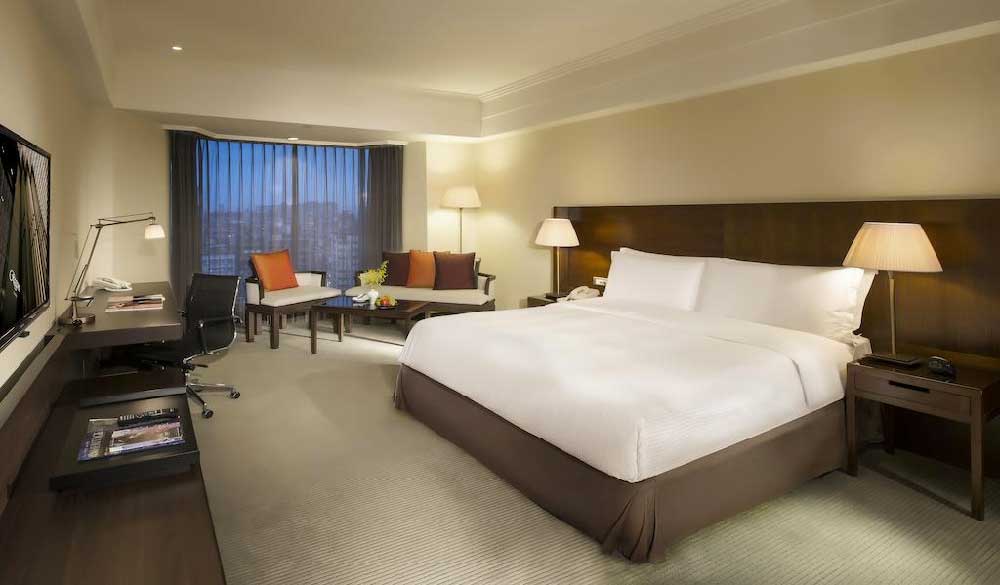 As comfortable as the rooms are at Regent Taipei, the real drawcard is the barrage of on-site amenities.

Pamper yourself with a relaxing massage at the Wellspring Spa. Or sweat off some pepper buns in the steam room. For Taiwanese urban relaxation, soak in Taipei city views at the heated rooftop pool.

For gourmands, there’s also a wide assortment of food options at Regent Taipei.

Test out the traditional Japanese fine dining at Mihan Honke. Or sizzle the tastebuds with fiery Szechwan or savoury Cantonese at Silks House.

For a delectable snack, plunk yourself down the classy Azie Grand Café. Try their signature Taiwanese beef noodle soup. It’s been voted as one of the best in the city.