On any ultimate road trip through Western Canada, coasting along the Icefields Parkway in Alberta is bound to be among the moments that’ll capture your attention and affection most forcefully.

Running about 230 kilometres between Lake Louise in Banff National Park to the town of Jasper in Jasper National Park, the Icefields Parkway (Highway 93) is one of most scenic road trips in Canada. And given the immense natural beauty of Canada, this is no small feat!

Whether you decide to ride out the entire trip from Banff to Jasper in one day or stretch your Icefields Parkway itinerary out over a couple days, experience all the best of the Icefields Parkway with this complete guide for what to see, where to stay, and when to visit…

Looking for more ideas for your trip? Check out our guide for where to visit in Canada for more recommendations on when to visit, where to go & what to do!

What to see along the Icefields Parkway

Situated on the southern edge of the Icefields Parkway between Banff and Jasper in the Canadian Rockies, Lake Louise is the logical place to start planning out your itinerary. 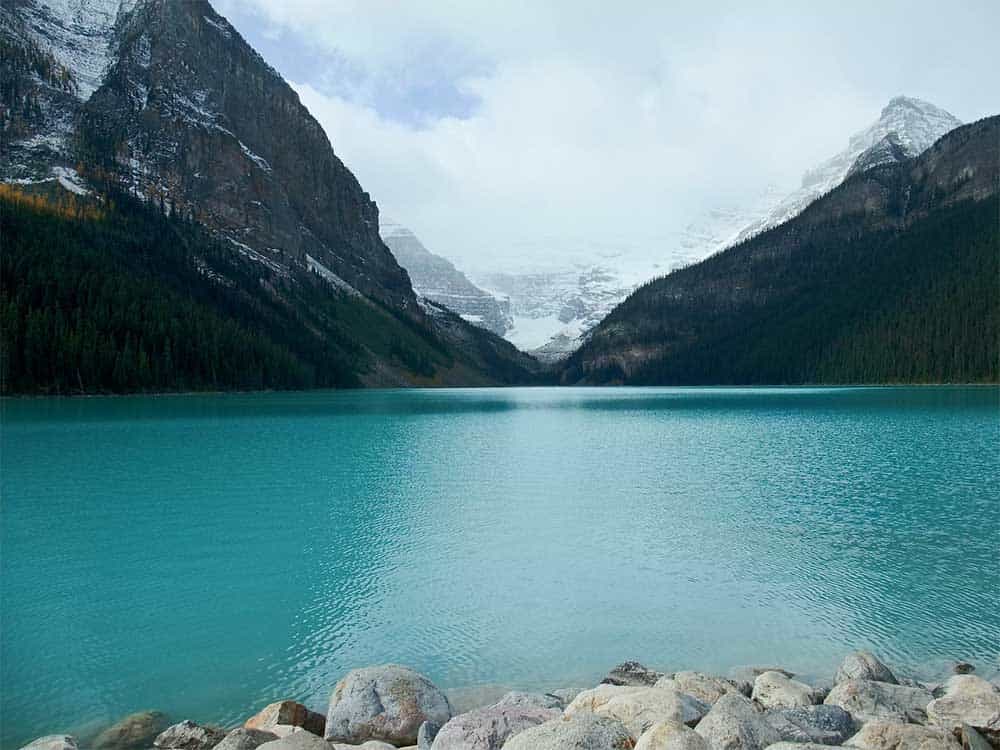 If you’re amidst a Banff itinerary, chances are you’ll have already spent some time checking out all the incredible sightseeing opportunities in Lake Louise.

In case you’re just passing through, here are few places to look out for:

Located just 25 minutes north of Lake Louise, you’ll encounter your first major stop along the Icefields Parkway, Bow Lake. This stunning lake, fed by the Bow Glacier in the Wapta Icefield, sits in the heart of the Canadian Rockies in Banff National Park at an elevation of 1,920 metres with the jagged Bow Summit as its backdrop. 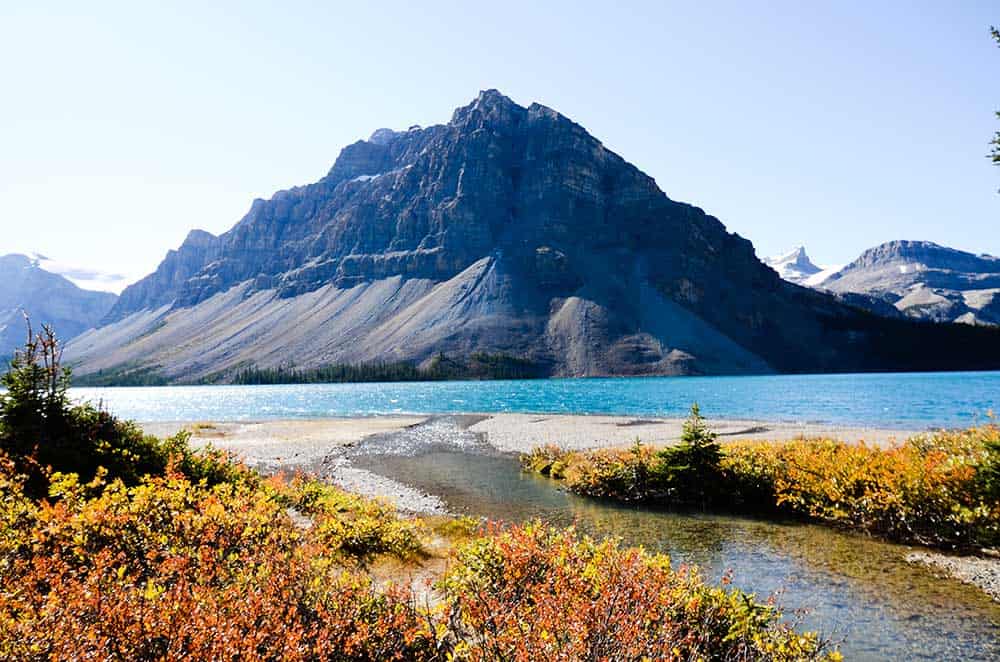 Although you’re only 25 minutes into your Icefields Parkway itinerary, Bow Lake is the perfect place to stop for a short walk or for a few quick photo ops before moving along with your day.

Among the most impressive places to see in Banff National Park, Peyto Lake is a mere 5-minute drive from Bow Lake along the Icefields Parkway.

Like other glacial lakes in the Canadian Rockies, Peyto Lake glistens with radiant blues and greens during the peak summer months, set to dramatic mountainous backdrop. It’s more than just a pretty face though. 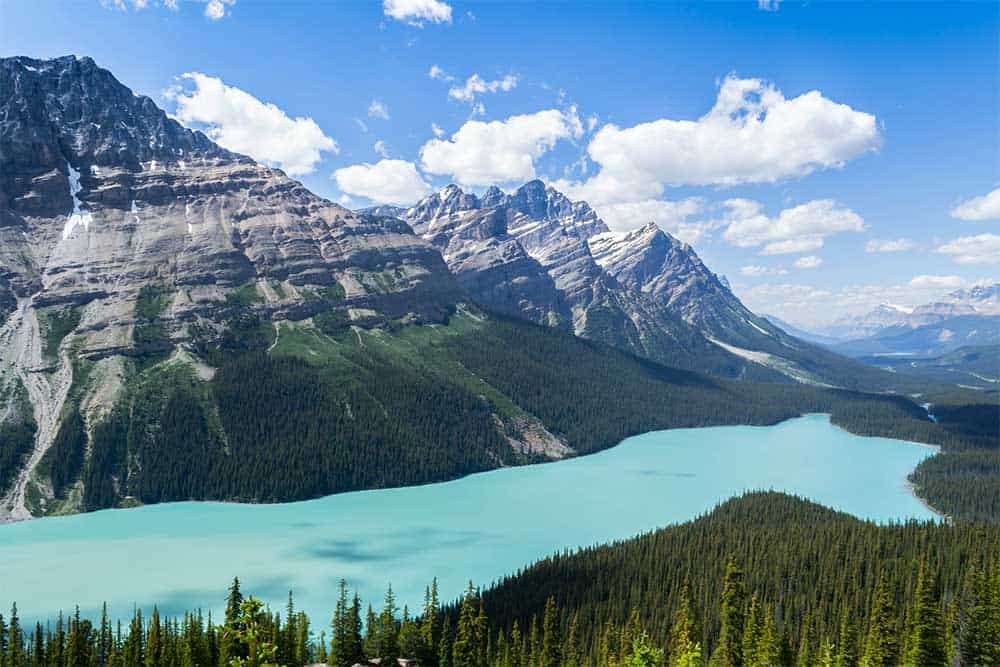 The area around Peyto Lake is home to some of Banff National Park’s top hiking trails. While most travellers on a Icefields Parkway adventure will opt for the easy & family-friendly 2.6-kilometre route to the Peyto Lake lookout, if you’re planning to spend the night nearby to break up the journey, you can extend your hike to the peak of the Bow Summit for even more spectacular views over Banff National Park.

While perhaps not quite as famous as other canyons in the two national parks (like Johnston Canyon or Maligne Canyon), Mistaya Canyon is a must-stop destination on any Icefields Parkway itinerary. It’s located just 25 minutes north of Peyto Lake and 5 kilometres south of Saskatchewan River Crossing. 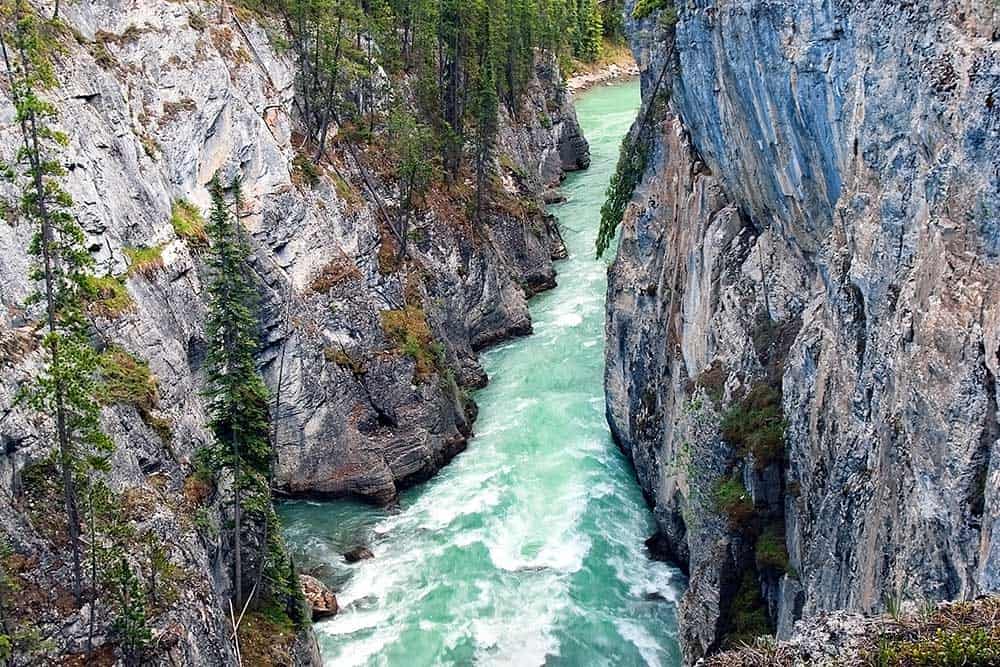 From the parking lot area off the Icefields Parkway, prepare for a short 10-minute walk through dense forest towards Mistaya Canyon. About 1 kilometre into the trail, you’ll arrive at a wooden bridge where you’ll be able to see Mistaya Canyon in all its majesty.

If you’re not in a rush, spend some time exploring the area to gaze upon its whitewater river waters, waterfalls, and mountain scenery before continuing on your Icefields Parkway road trip.

Although it’s only about 7 minutes up the road from Mistaya Canyon, the Howse Pass Viewpoint is another fantastic place to stretch your legs and snag a few quick Rocky Mountain photo ops on your Icefields Parkway road trip.

Once an ancient First Nations trading route, Howse Pass stretches from the Columbia River Valley through the Rocky Mountains and into the rugged interior of British Columbia. Thanks to its historical importance, Howse Pass itself is listed as a National Historic Site of Canada.

Ironically enough, you won’t see much of Howse Pass itself from the viewpoint. The views of the North Saskatchewan River snaking into the peaks along the Alberta and British Columbia border are, nonetheless, incredible.

Just steps from the Howse Pass Viewpoint at the junction of the Icefields Parkway and David Thompson Highway (Highway 11), you’ll find a pit stop with a gas station and small restaurant. It’s the only gas station along the way. If you need to fuel up for the road ahead, this is the place to do it!

Driving just 22 minutes north of Saskatchewan River Crossing, you’ll stumble upon Weeping Wall. Formed by cliffs rising over 300 metres from the western base of Cirrus Mountain, Weeping Wall is named after the series of waterfalls that tumble over its edge into the valley below. 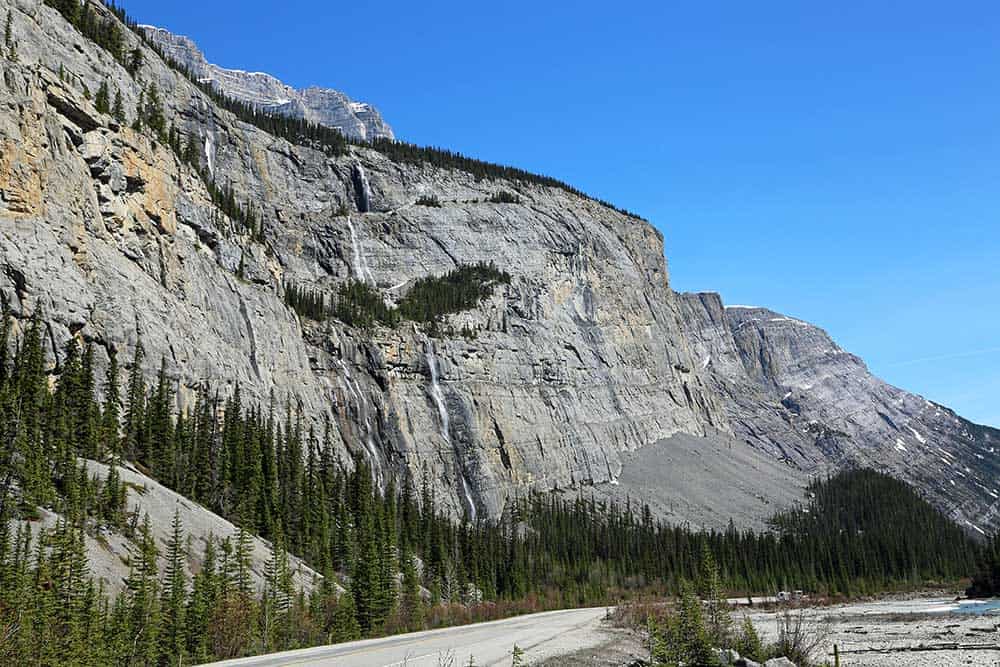 While Weeping Wall is beautiful year-round, one of the best times to see it is in winter when its frozen waterfalls turn the cliff face to a wall of blue ice. It’s a particularly popular stop on the Icefield Parkway for ice-climbers and is often listed as one of the best places for ice-climbing in the world.

From Weeping Wall, it’s a quick 11-minute drive over to Parker Ridge, one of the most spellbinding sights along the Icefields Parkway.

The trail to Parker ridge is one of Banff’s most popular hikes. And although it comes in at just 5 kilometres return, it’s certainly not necessarily one of the easiest trails to tackle in the area! 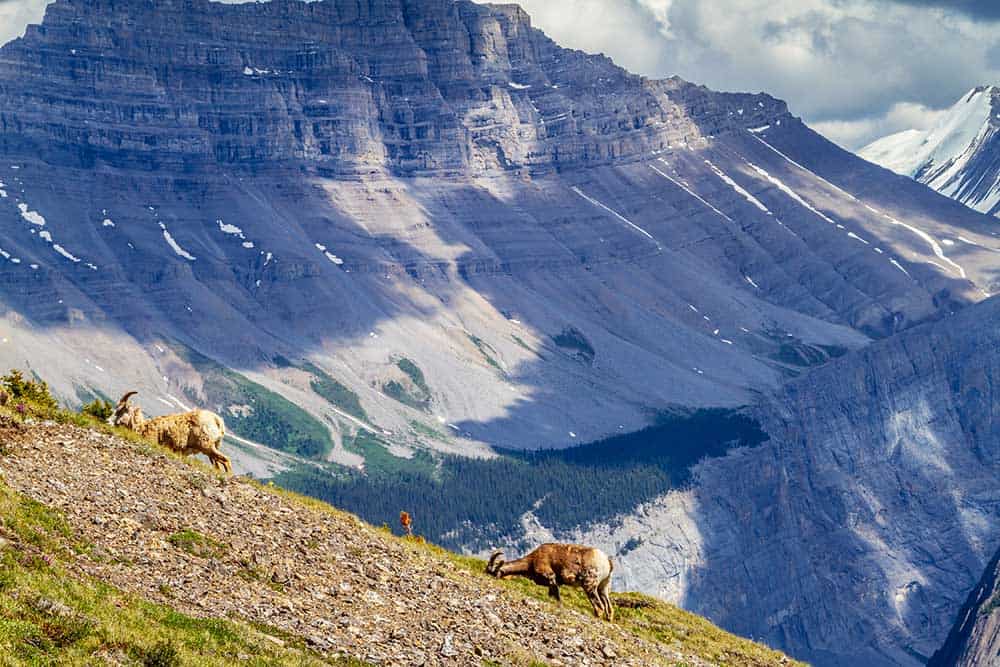 Completing the entire Parker Ridge Trail will take about 2 hours. Should you choose to accept your mission, be prepared to dazzle at some of the finest scenery between Banff and Jasper. When you finally approach Parker Ridge at the trail’s apex, you’ll see the majestic Saskatchewan Glacier dripping its glacial melt into a turquoise pool forming the head of the Saskatchewan River.

Since Parker Ridge is close to the halfway point between Lake Louise and Jasper, the area is a great place to spend the night to split your itinerary into two days. Stay at the nearby Glacier View Lodge and you’ll be able to embark on the Parker Ridge hike early in the morning to catch an unforgettable sunrise.

The first official stop in Jasper National Park, Wilcox Pass presents a fantastic opportunity to get a closer view of the majestic Athabasca Glacier. 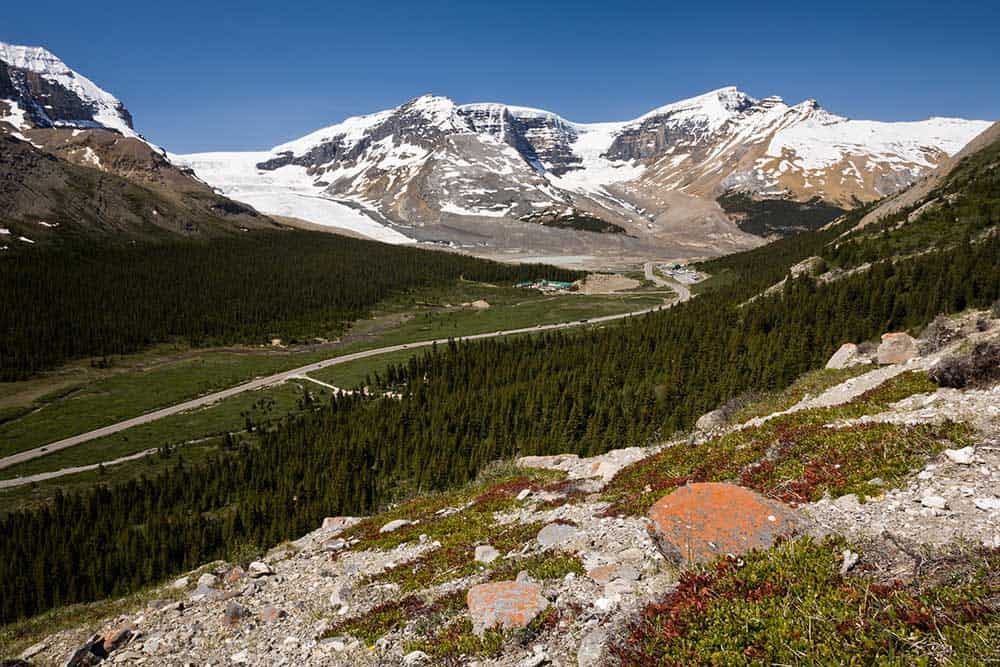 If you decided to break up your Icefields Parkway journey into two or more days, you should be able to find the time to take on this 9.3-kilometre-return hiking trail. Lasting about 3 to 4 hours, the Wilcox Pass hike climbs up 522 metres to its apex where you’ll get to experience arresting views of the Athabasca Glacier and the Columbia Icefield.

Be sure to dress warmly in layers on your hike as the higher elevation here often brings along heavy, cool winds.

By this point, there’s only an hour left to go in your trip between Banff and Jasper. Less than 10 minutes from Parker Ridge and Wilcox Pass, you’ll slide into one of Canada’s most famous travel destinations and one of the best stops along the route, the Columbia Icefield. One of the world’s largest non-polar ice fields, this eye-popping slice of nature is the perfect complement for this scenic road trip.

If you want to experience the ice field and Athabasca Glacier at its best, join in on an Ice Explorer Tour along with a walk along the Columbia Icefield Skywalk. Running one kilometre along a cliff edge 280 metres above the Sunwapta Valley, the precipitous Glacier Skywalk offers an incredible bird’s-eye view of glaciers, rivers, and mountain peaks.

Another natural gem listed among the most amazing things to see in Jasper National Park is Sunwapta Falls, located just 30 minutes from the icefields. With its series of three cascading waterfalls along the Sunwapta River, these falls are some of the most impressive in the Jasper area. 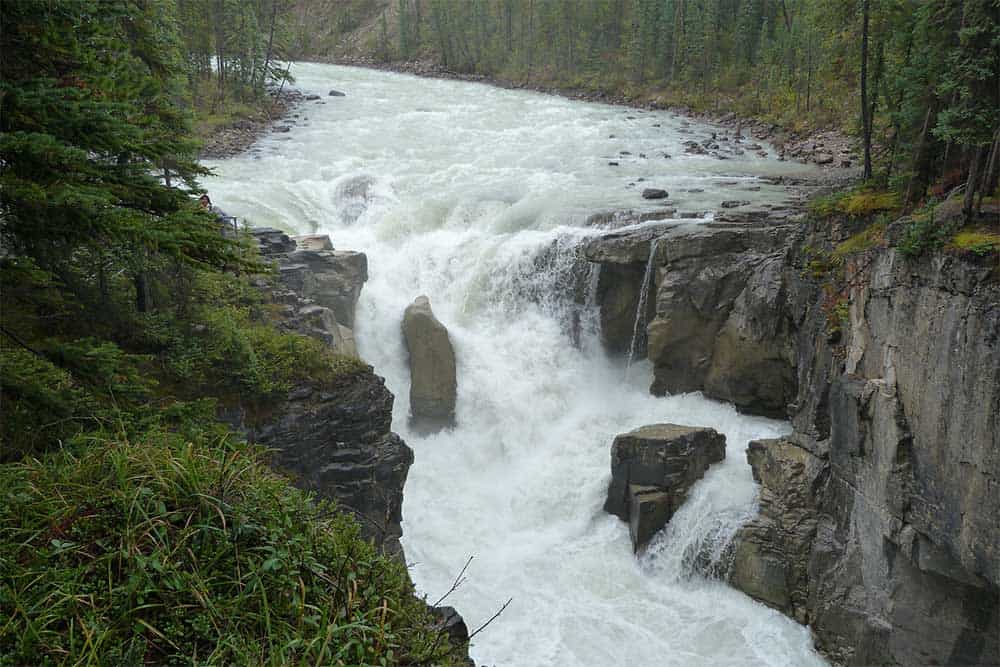 Sunwapta Falls breaks up into two sections: upper and lower. Over the course of their journey, the waterfalls tumble over 22 metres into the river below.

From main parking lot just off of the Icefields Parkway, it’s a quick walk to both the lower and upper sections of the falls. To see at their best, visit in late spring and early summer when the melt-off from the Athabasca Glacier is at its peak and the water flowing from the falls it at its strongest.

Less than twenty minutes from Sunwapta Falls, you’ll meet up with another one of Jasper National Park’s finest waterfalls, Athabasca Falls. 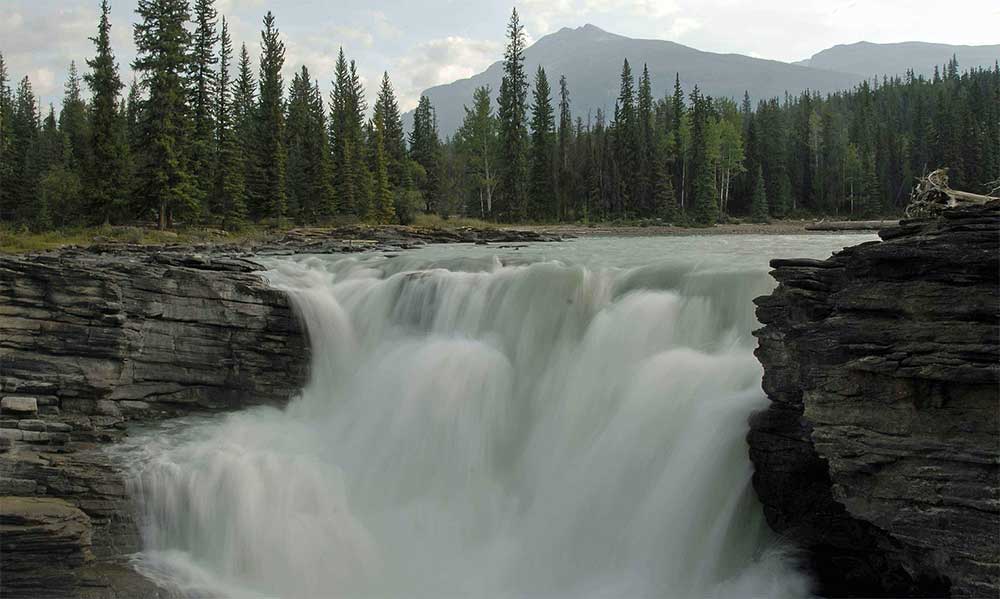 The Athabasca Falls, sitting just 30 minutes south of the town of Jasper, show off the Athabasca River at its most powerful. Witnessing its raging whitewater racing down 23-metres into the river below is an experience any visitor to Jasper National Park needs to etch into their road trip.

Depending on whether your Icefields Parkway road trip travels north to south or south to north, Jasper will either be the beginning or the end of your journey. And it’s certainly not bad in either role! 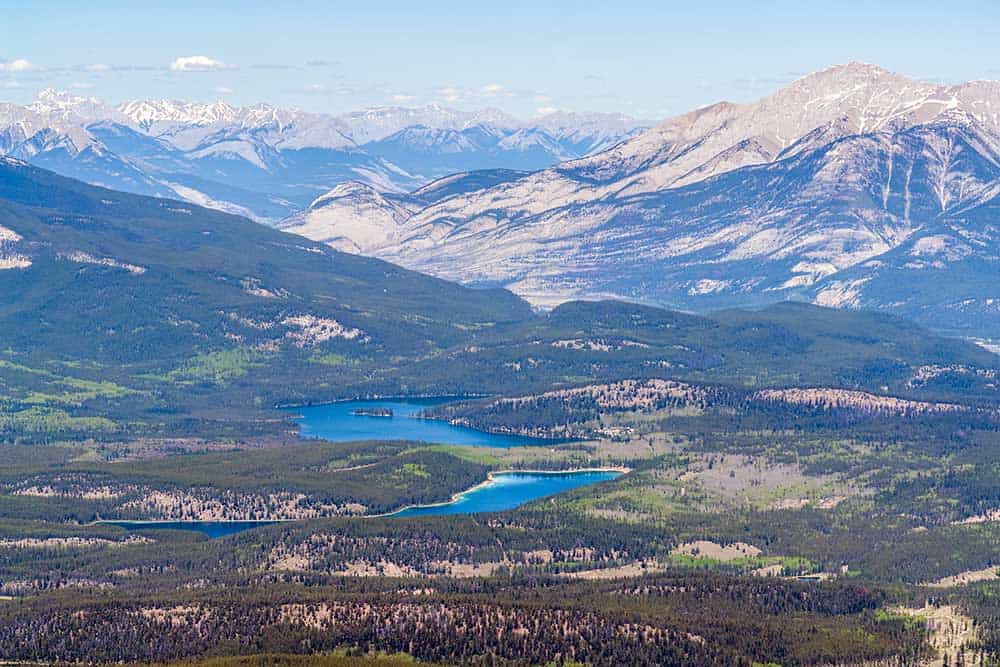 Where can I stay along the route?

If you want to stretch your Icefields Parkway itinerary out to two days, here are a few of the best places to stay:

When is the best time to visit?

Although the road is open all year round, the best time to travel along the Icefields Parkway from Banff to Jasper is between May and October. Between late spring and autumn, the road conditions are at their safest, the weather is at its best, and the sightseeing & wildlife-watching opportunities are at their peak. 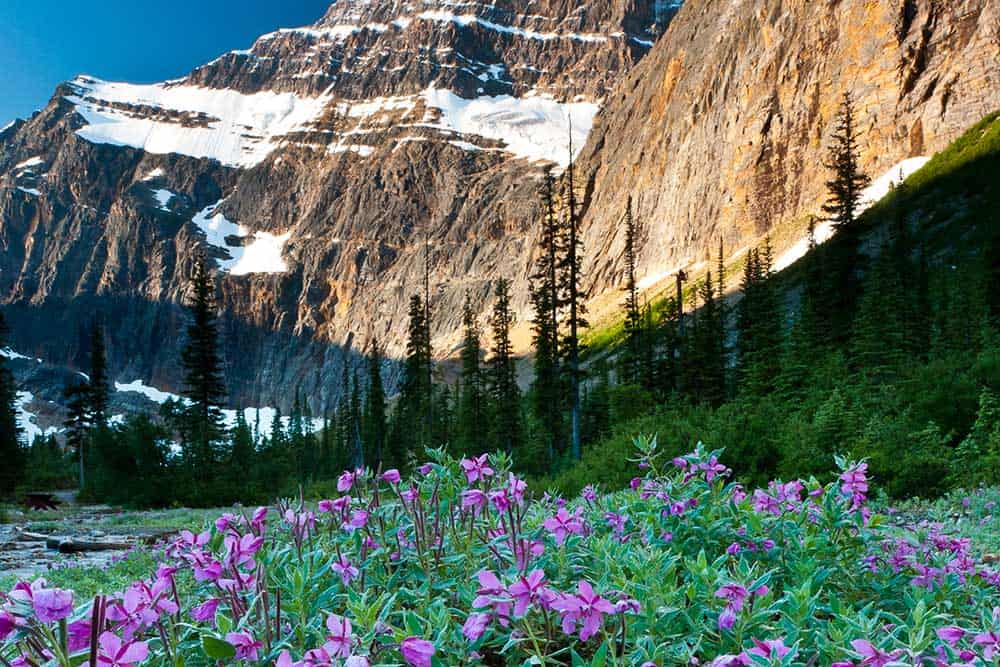 Keep in mind that the peak tourist months of July and August can be quite crowded in both Banff National Park and Jasper National Park. It may be more difficult and more expensive to find accommodations along the Icefields Parkway and in the two top tourist centres along the route, Lake Louise and Jasper.

If you’re travelling from mid- to late fall through to mid- to late spring, be sure to keep an eye on the road conditions. The area’s high elevation also brings cooler temperatures and a longer snowfall season. In fact, it’s not unheard of to see snowfall as early as October or as late as early June! 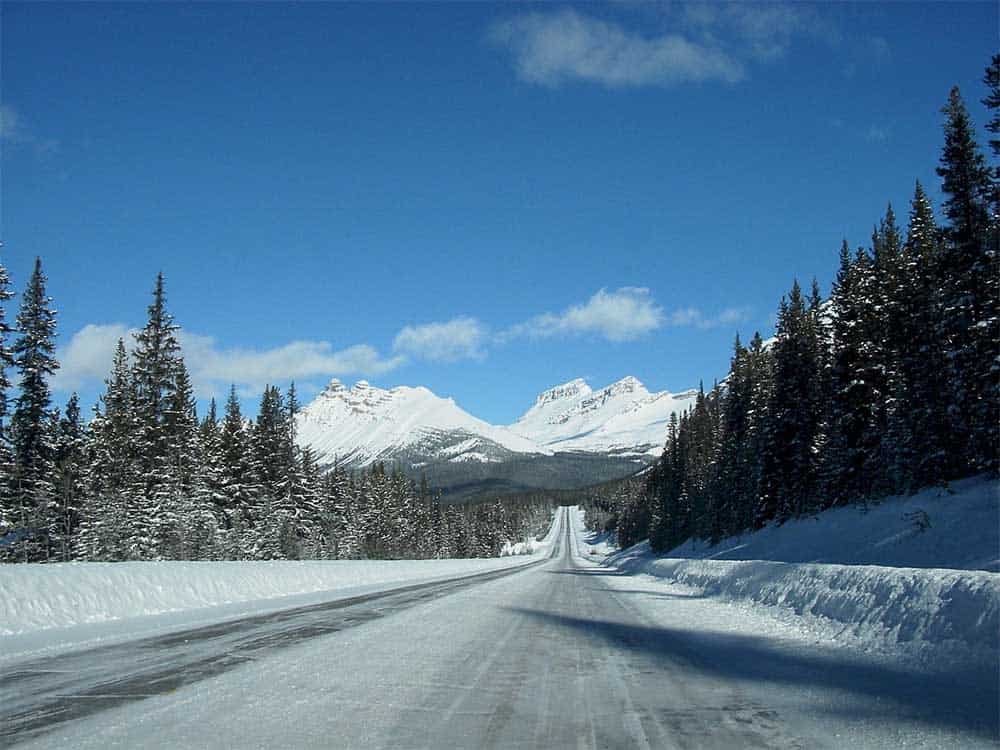 Driving along the Icefields Parkway in winter is particularly treacherous. The Icefields Parkway is not maintained to the same degree as other major highways in Alberta like the Trans-Canada Highway. It’s also subject to frequent random closures during periods of heavy snowfall due to avalanche risk.

How do I get there?

The Icefields Parkway is accessible via its to main terminus points, Jasper and Lake Louise. From Edmonton, it’s a 4-hour drive to Jasper via the Yellowhead Highway (Highway 16). From Calgary, it’s about 2 hours to Lake Louise via Banff along the Trans-Canada Highway.

Also note that you’ll require a pass from Parks Canada to travel along this route by car—even if you don’t plan to stop. If you plan to spend any more than a week exploring national parks in Canada, you’ll save money with an annual Parks Canada Discovery Pass. Get the low-down on all the options on the Parks Canada official website.