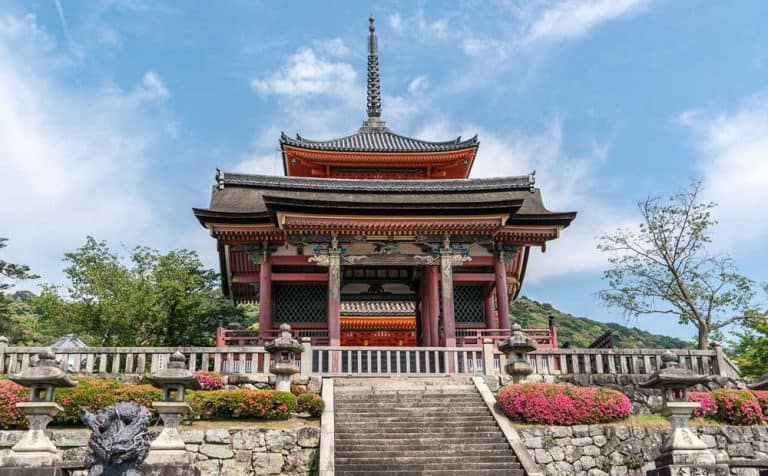 Over 1,500 impressive shrines & temples, featuring traditional Japanese architecture, pepper Kyoto. Of course, you won’t have time to visit all of them during your first-time Kyoto itinerary.

Not sure how to get started? Check out some of the city’s most remarkable sights this guide to the absolute best temples & shrines in Kyoto…

One of the oldest shrines in Japan, Shimogamo Shrine is a one of the most impressive must-see shrines in Kyoto. It’s believed to have been built in the 6th century, a couple of hundred years before Kyoto became the imperial capital. 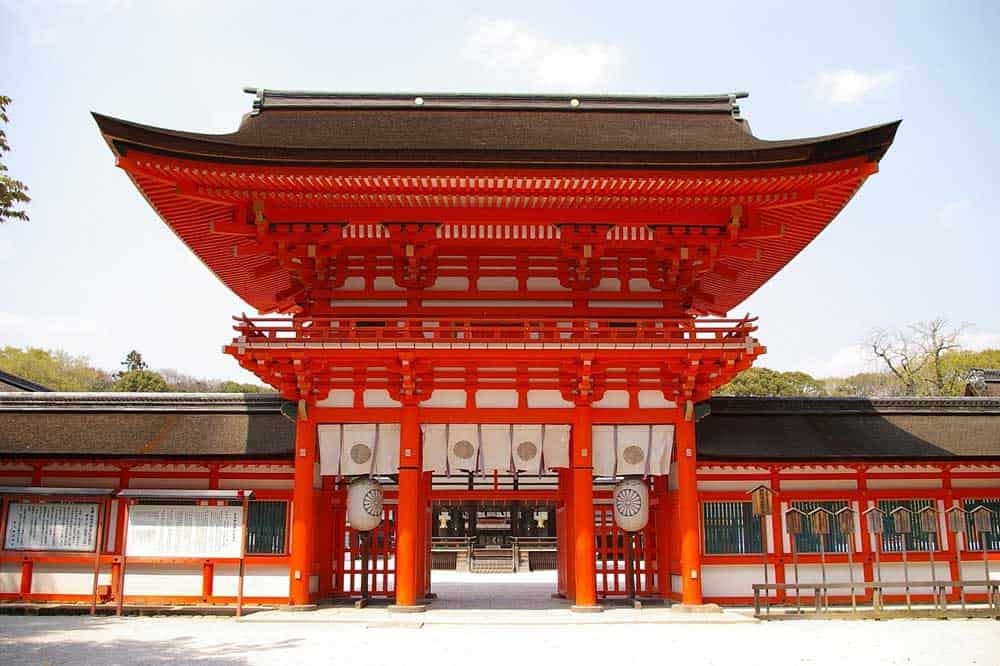 The Shimogamo Shrine is exactly what you expect when your dream about  Shinto shrine. It includes a variety of buildings featuring traditional Japanese architecture, ponds and streams, and well-manicured lawns and shrubbery. If you’ve only got time to visit just one shrine in Kyoto, make it Shimogamo. 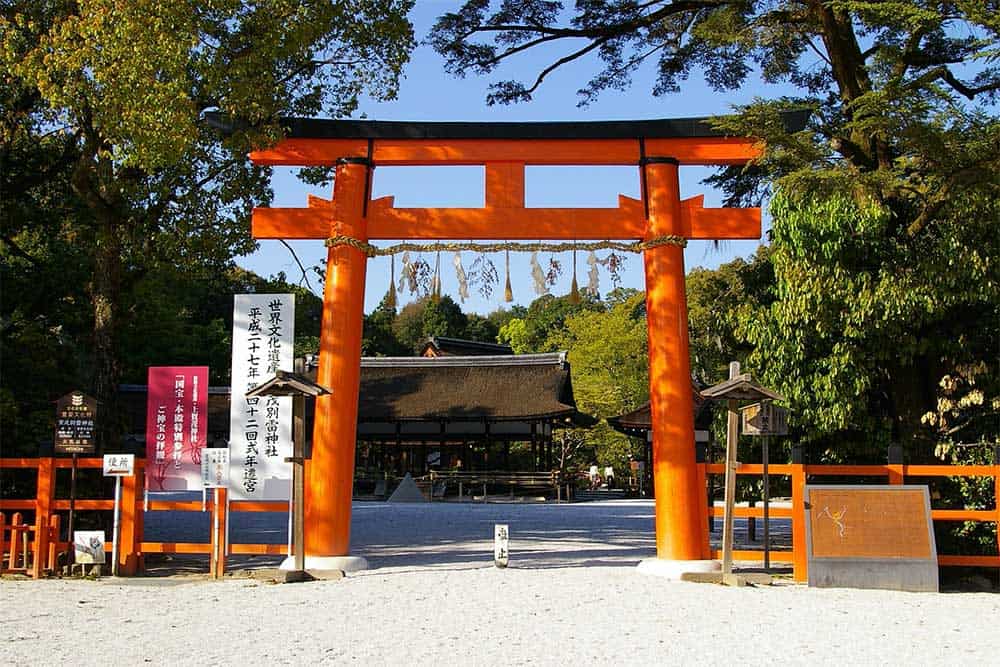 Together, these shrines hold one of the biggest festivals in Kyoto each year. The Aoi Matsuri is held on the 15th of May and includes a large procession that starts at the Imperial Palace and ends at Kamigamo Shrine. If you happen to miss the procession, don’t worry: There are plenty of other festivals throughout the year.

Kiyomizudera Temple sits among the most popular attractions in Kyoto. Be prepared to elbow your way, shoulder-to-shoulder, through the masses any day of the week as you work your way to the main temple building. 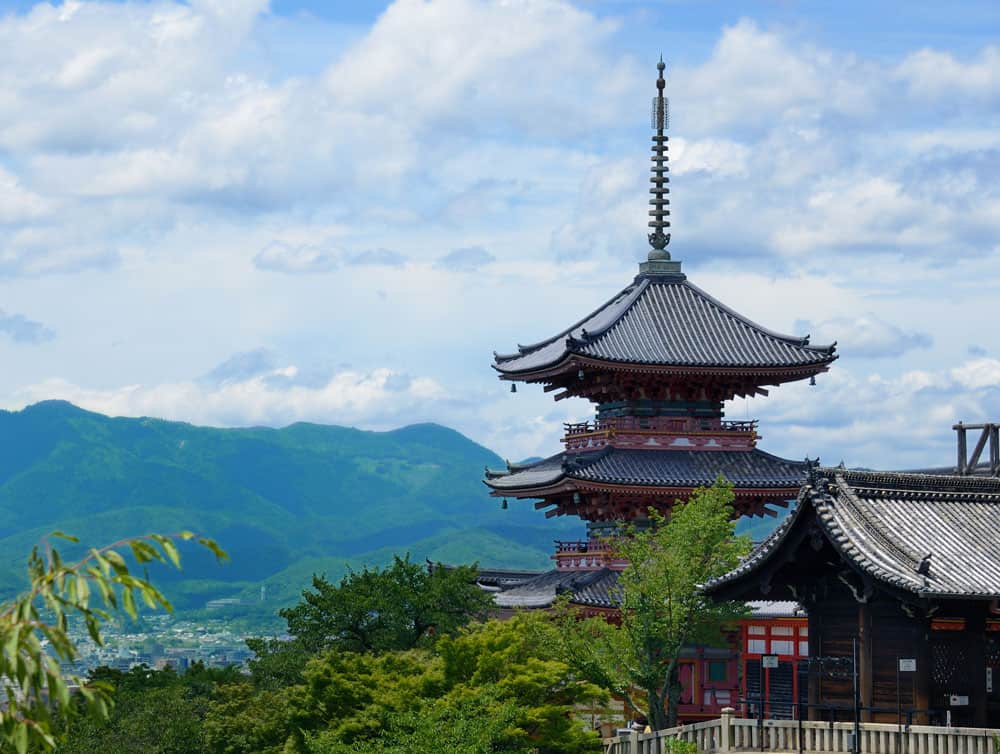 The most visited spot in the temple is the main hall, a wooden stage built without nails that stands 13 meters above the hillside. It offers a great view over the city drenched in a sea of colours, especially among Kyoto’s spring cherry blossoms and the city’s fall foliage season.

Unfortunately, the hall at Kiyomizudera is being renovated. The renovations won’t be completed until 2020, so the hall may not always be open to the public.

Autumn is the best time to visit Eikando Temple in Kyoto. The autumn leaves complement the temple and the surrounding pond and garden. However, the best part about a trip to Eikando temple is the path leading to you. You’ll need to travel through the surrounding woods. In the fall, these woods are bursting with colour. 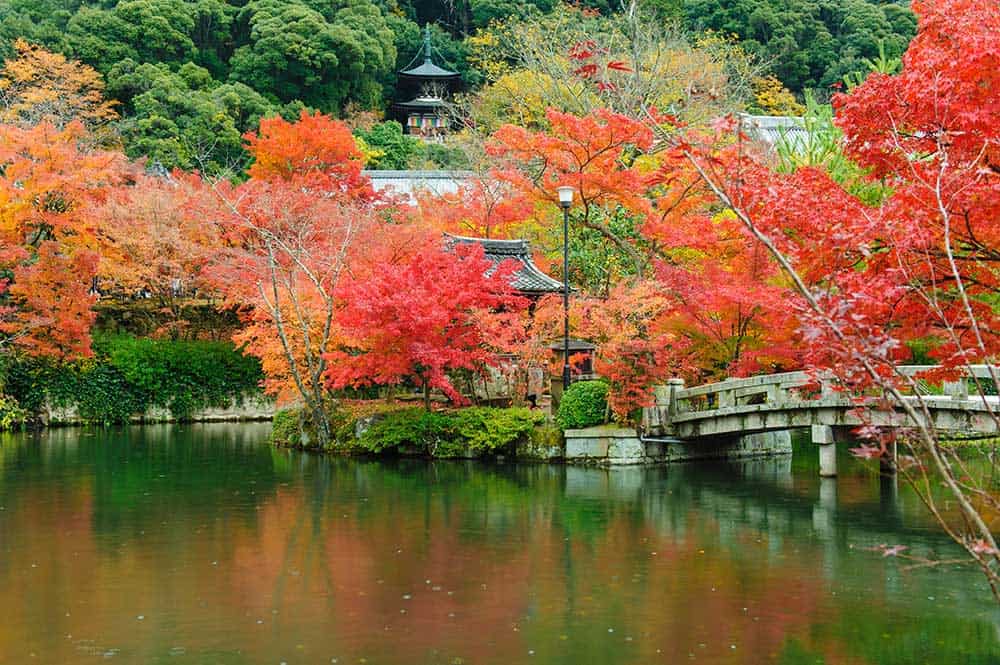 By the time that you reach Eikando Temple, you may want to turn around and walk through the woods again. Before you go, take in a view of Kyoto from the steps of the main temple building. On a clear day, you can get great shots of the cityscape.

Kinkakuji Temple looks like an image from a postcard, especially during the winter months. The snowy forest surrounding the temple is the perfect backdrop for the golden temple. The main structure is a three-story building featuring gold leaf on the exterior of the upper two stories. 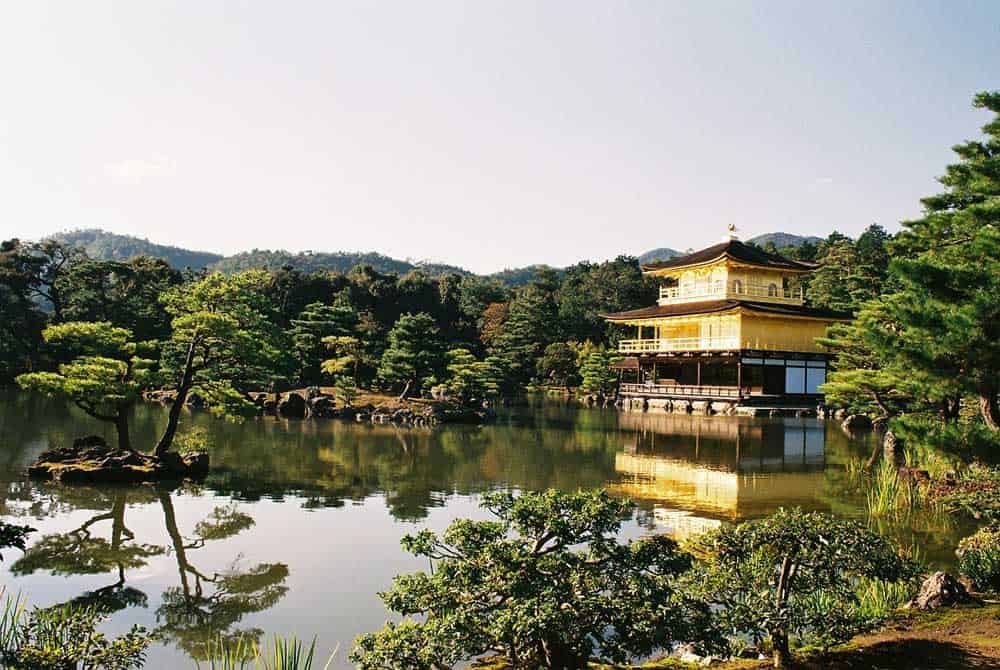 It’s one of the coolest-looking temples in Kyoto, thanks to its combination of unique architectural features. Each story of the temple features a different style.

The first story resembles a Heian palace; the second a Samurai house. The top story, on the other hand, sports the look of traditional Buddhist temple. As an added benefit, Kinkakuji Temple is rarely as crowded as some of the other temples.

You wouldn’t be the first person if you confused Ginkakuji Temple with Kinkakuji. The first floor of this stunning temple resembles a domestic abode, while the second story is built like a Buddhist temple. While they both feature the same architectural style, Ginkakuji has a more rustic look compared to the golden Kinkakuji. 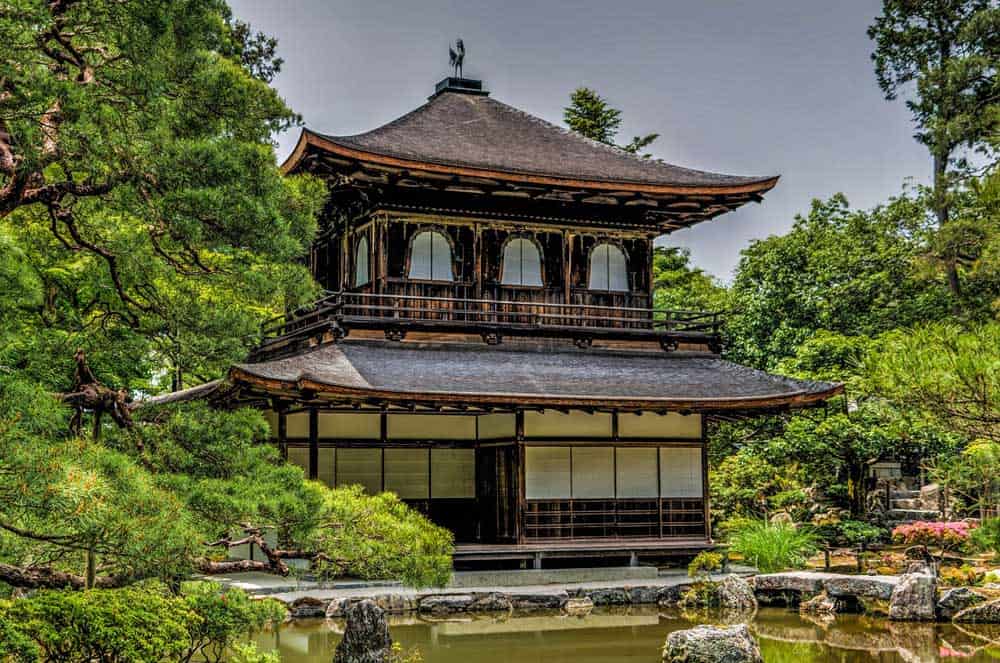 The two-story main temple structure was originally designed to emulate Kinkakuji. It’s called the Silver Pavilion, as the builders aimed to cover it in a silver foil finish. Unfortunately, the silver foil was never added. Instead, the temple looks like a large cabin. (A pretty beautiful cabin at that!)

Nanzenji Temple may not feature towering pagodas or breathtaking scenery. That doesn’t make an any less important cultural site in Kyoto.

The temple was built in 1291 for locals to pray for the country. It’s now one of the most popular destinations in Kyoto, especially during cherry blossom season. 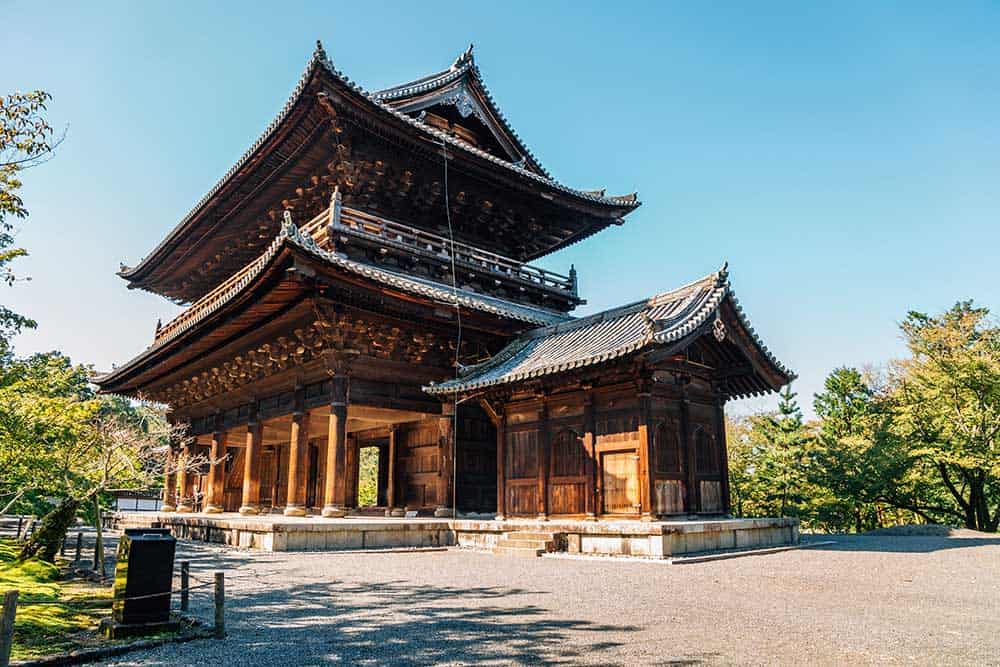 When you get to this Nanzenji, you’ll need to climb to the upper floor of the main gate. It stands over 22 meters high and offers an open view of northwest Kyoto. When the cherry blossoms are in full bloom, you can see puffs of white and pink flowers dotting the landscape for miles.

Sanjusangendo is more than just a temple. Home to 1,001 life-sized statues, Sanjusangendo Temple is made from Japanese cypress and stretches over 120 meters. The statues are of Kannon, the goddess of mercy famous for having 1,000 arms. While the statues only have 42 arms, they’re still quite impressive to see lined up. 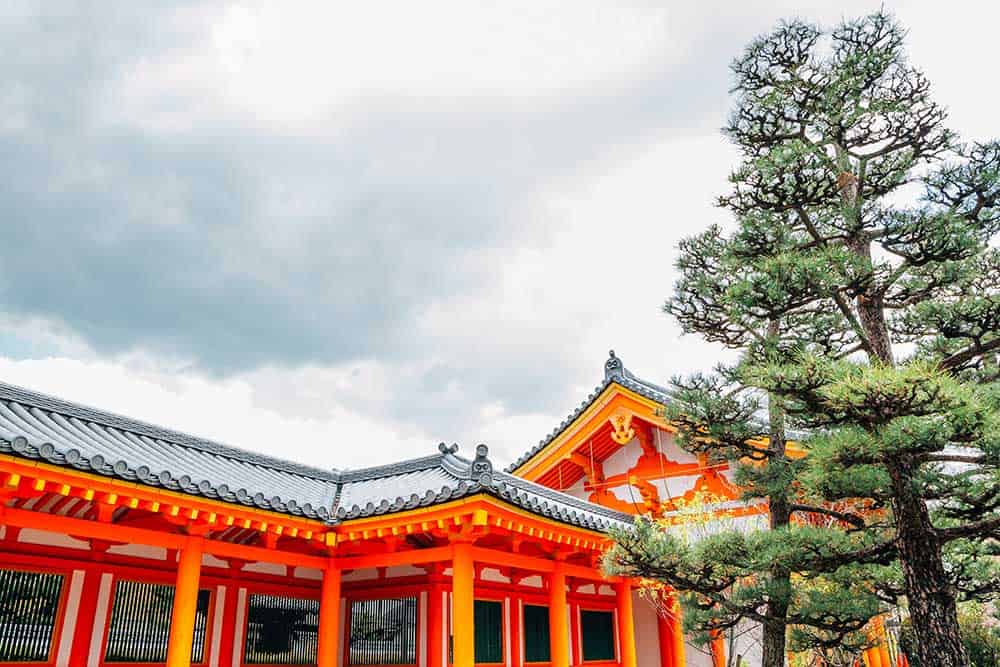 The statues at Sanjusangendo Temple feature plenty of intricate work and carvings. In the darkened temple, they’re quite imposing. Expect to get some goosebumps as you enter the temple, catching a glimpse of the rows of statues for the first time!

Built in 888, Ninnaji Temple includes a five-story pagoda that peeks out over the tops of the cherry trees that line the temple grounds. If you go during cherry blossom season, one of the best times of the year to go to Kyoto, it’s a magical setting. You can just see the top two stories of the pagoda over the blanket of white flowers. 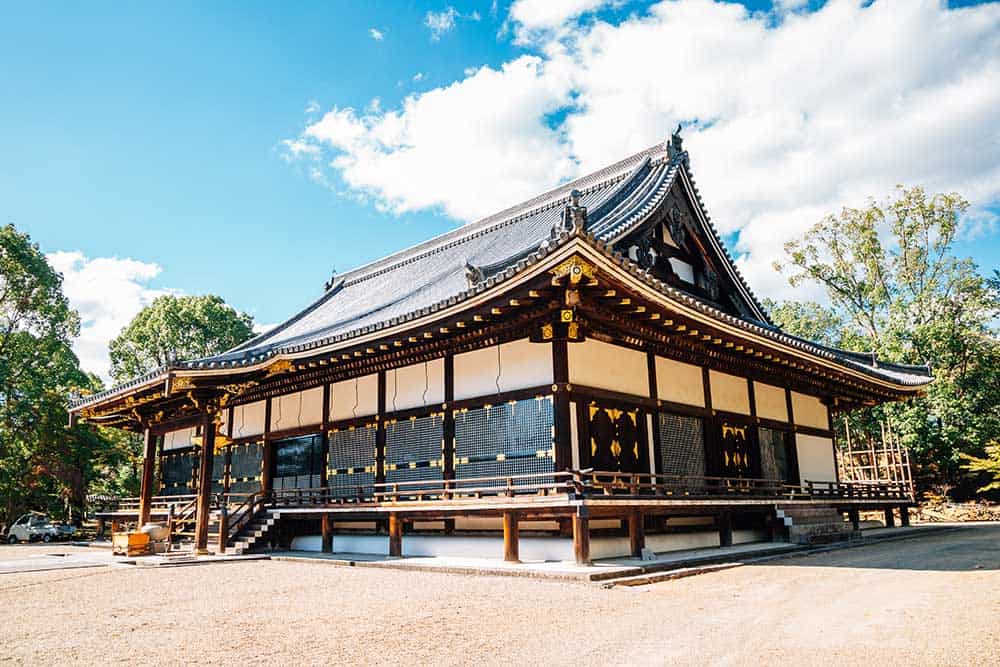 Ninnaji Temple also houses a variety of pond gardens and buildings that are connected by a series of covered corridors. If you’re hungry when you arrive, there are typically quite a few vendors lined up outside the temple gates.

Kifune Shrine is a famous Kyoto shrine built over 1,500 years ago. It’s surrounded by woods and dedicated to the God of Water. It’s also considered a marriage shrine. Don’t worry: No one is trying to rush you into anything! But it is the perfect spot in Kyoto for a marriage proposal, if you’re travelling with your significant other. (Hint. Hint.) 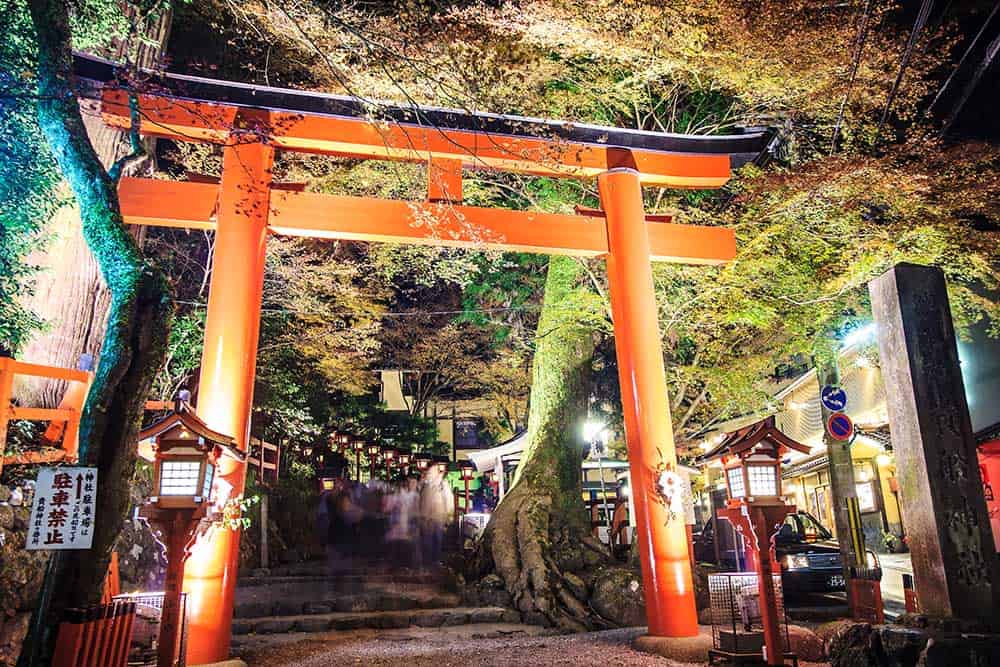 The area surrounding Kifune Shrine also provides access to shops and restaurants. However, the quaint restaurants are quite busy during tourist season and you may need to reserve ahead of time.

While the town that surrounds the temple looks like it was built over 1,500 years ago, most of the buildings are recently built with traditional architecture style.

Where to stay in Kyoto: The best hotels for temple-hopping

As one of Japan’s top destinations, figuring out where to stay in Kyoto isn’t always simple. For temple-hoppers, the areas of Gion and Higashiyama are particularly convenient. Many of the best temples & shrines in Kyoto are easily accessible from these areas by foot or by public transportation.