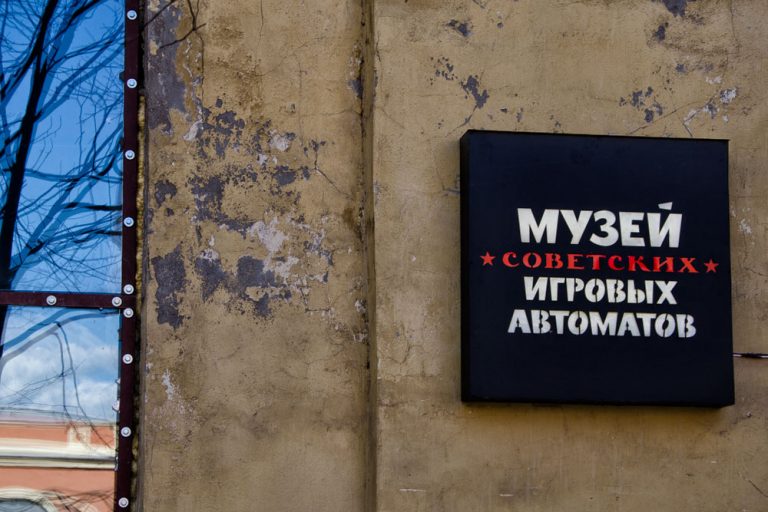 If you’re an ’80s kid who grew up with Atari or Nintendo controllers attached to your thumbs, I guarantee that you’ll fall in love at the Museum of Soviet Arcade Machines in St. Petersburg, Russia.

Could I have stumbled into a weirder (or cooler) museum in Eastern Europe? I doubt it.

And even if it doesn’t crack many lists of top places to see in St. Petersburg, it might well be the most memorable addition to your St. Petersburg itinerary.

The Museum of Soviet Arcade Machines

The Museum of Soviet Arcade Machines is proof that simple fun doesn’t get old. Even if you’re an Xbox addict who complains that the graphics in the new Call of Duty game aren’t quite up to snuff, I challenge you to not grin while popping kopecks into these Soviet relics.

The game machines here originate as far back as the late 1970s and early 1980s, when arcade machines first started gaining popularity in Japan and the United States. To anyone who spent countless hours picking quarters out of couch cushions to squeeze in a few more hours at the arcade, there aren’t too many surprises here: just simple games and simple fun.

What struck me as incredible was the number of games at the Museum of Soviet Arcade Machines that still functioned. Unlike the majority of arcade machines that you’d recognize from your childhood, many of those from the Soviet era are not 100% digital, but contain moving parts that are miraculously still responsive. (Perhaps there’s a “Soviet Arcade Machine Engineering” program at Saint Petersburg State University?)

The entrance charge of 350 rubles ($10.40) gets you 15 kopecks to play around. Not all the machines are made equal, ranging from easy to figure out to completely confusing if you’re not Russian. (Seriously, has anyone outside of Russia ever heard of “gorodki“?)

Want to know what to check out at the Museum of Soviet Arcade Machines? Here were a few of my personal favourites:

After only a couple rounds and you’ll be a pro at Vozdushniy Boi, a military-themed game where you’re a pilot engaged in a dogfight. The objective is simple: aim at the enemy planes and fire while they “dodge” your bullets. For an electromechanical game, the flight patterns are surprisingly random. It’ll take a few tries to get the hang of it.

Like Vozdushniy Boi, Sniaper-2 works on an easy premise: aim and shoot. The mechanics are easier to master than Vozdushniy Boi, and in a few rounds you should have no problem knocking down all the targets.

If you were a kid growing up in the Soviet Union, you likely wasted incalculable hours playing Morskoi Boi. Ask any thirty-something Russian: This is the classic Soviet game of its time. Electromechanical rather than digital, Morskoi Boi was a technological breakthrough that paved the way for the Soviet gaming industry.

The game itself is simple: you’re on a submarine, staring into your periscope, ready to fire at enemy ships. It’s interactive, fun, and about as retro as gaming gets. You’ll love it. (Try out a Flash version of Morskoi Boi here.)

Unlike many museums in Saint Petersburg, the Museum of Soviet Arcade Machines is no problem to find. From the front entrance of Church of the Saviour on Blood, simply cross the Griboyedov Canal over the Novo-Konyushenny Bridge—the museum is directly on the left-hand side through the courtyard, before the strip of restaurants.

If you’re ever visiting Saint Petersburg and want to relive some blissful moments from the ’70s and ’80s (or need to keep the kids entertained for an hour), it’s well worth stopping in to the Museum of Soviet Arcade Machines.