Only got one day in Vancouver? As the third-biggest city in Canada and the largest city in the western province of British Columbia, Vancouver is never short on activities.

Even if you can only carve out 24 hours in Vancouver, you’ll have a chance to experience anything from museums & parks to the art galleries & shopping districts. With an extended Vancouver itinerary, you can take advantage of the city’s spectacular location at the foot of the Rocky Mountains and along the shores of the Pacific Ocean.

Not sure where to begin exploring Vancouver in one day? Start planning your trip with this complete 1-day Vancouver itinerary…

What to do in Vancouver in 24 hours: A complete one-day itinerary

One day in Vancouver offers just enough time to see a few of the city’s top attractions. Most of the sites are clustered around Vancouver Harbour and connected via walkable stretches of road. 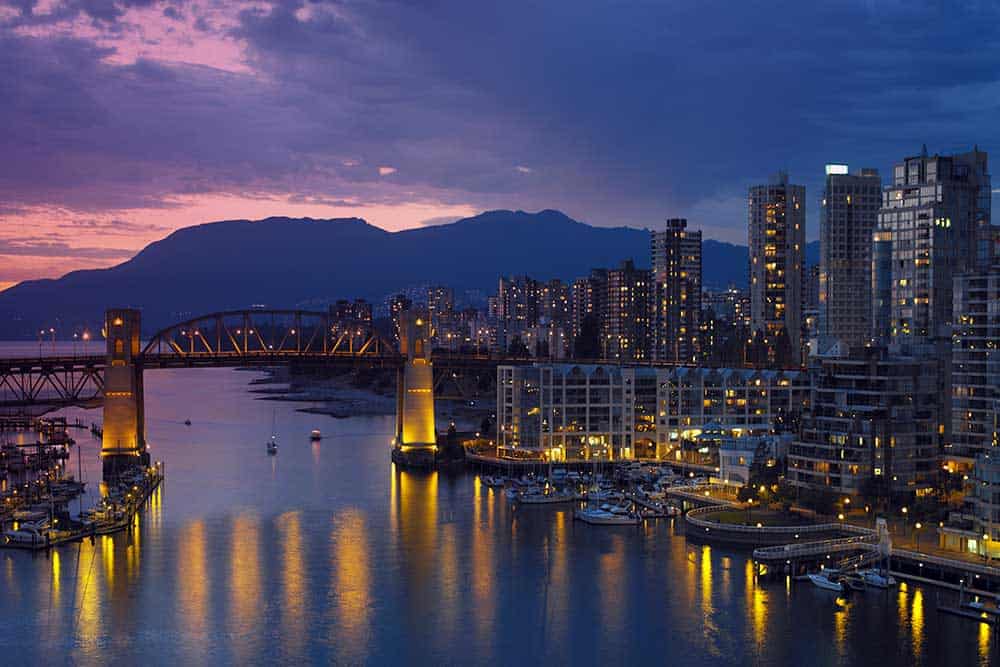 As with most of our one-day city itineraries, this Vancouver itinerary includes a lot of walking. You can travel between most sites on foot. However, the occasional taxi or bus ride can shave a few minutes off your travel times.

The tour takes you through the city’s top parks, gardens, museums, and landmarks along with stops for food and shopping. Let’s get started.

Grab a coffee and explore the walking paths at Stanley Park

With just 24 hours in Vancouver, you’ll start on the west side of the city and work your way across the downtown area. As soon as you arrive or leave your hotel, travel to Stanley Park, located at the northwestern tip of the peninsula. 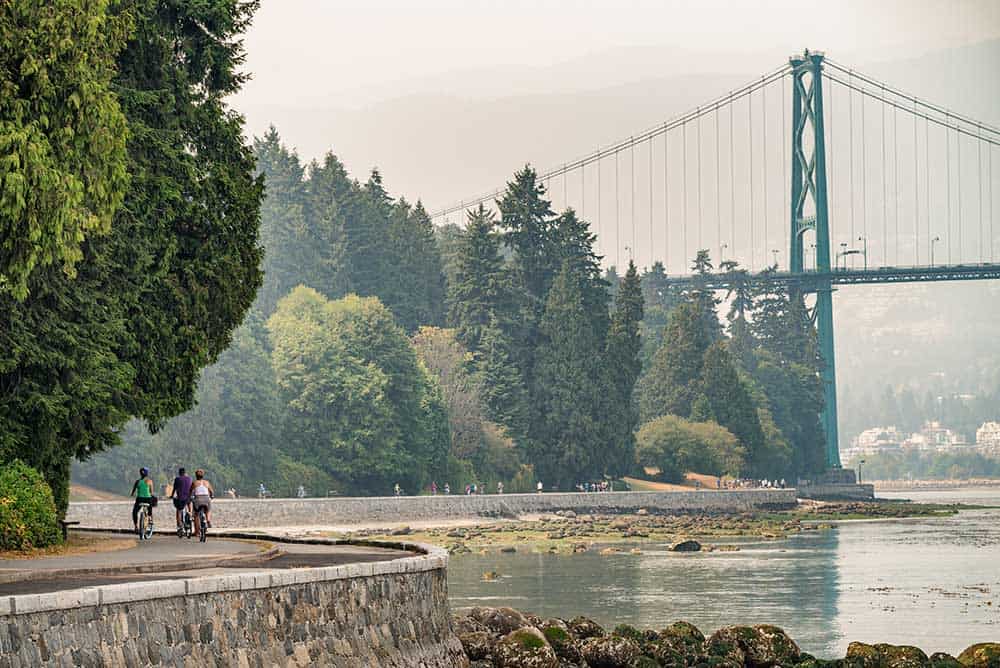 You’ll likely pass at least two or three Tim Hortons on the way to the park. Stop inside for a traditional Canadian fast-food breakfast of coffee and a donut.

After brushing off the donut crumbs, enter Stanley Park. It’s the largest park in the city, covering 1001 acres just northwest of the West End. It’s mostly covered in dense forests with over half a million trees.

Either walk around the sprawling park or rent a bicycle and cycle around the seawall. Bike rentals are found near the entrance. You can also walk part the seawall route. It extends for about 22 kilometres, so chances are you won’t have time to walk it all.

If you cycle around the Vancouver Seawall, look to the south as you around the outer rim of the path. You’ll see the Port of Vancouver and the downtown skyline.

If you skip the bike ride, Stanley Park still has plenty of other sites to explore. You can take a stroll near the Lost Lagoon or simply walk through the forested paths. The forested trails take you past several monuments, playgrounds, and a rideable miniature railway.

Examine hundreds of species of marine life at the Vancouver Aquarium

No matter if you ride the seawall or stroll the trails, work your way to the eastern edge of Stanley Park to reach the Vancouver Aquarium. The aquarium is inside the park and includes several outdoor facilities. 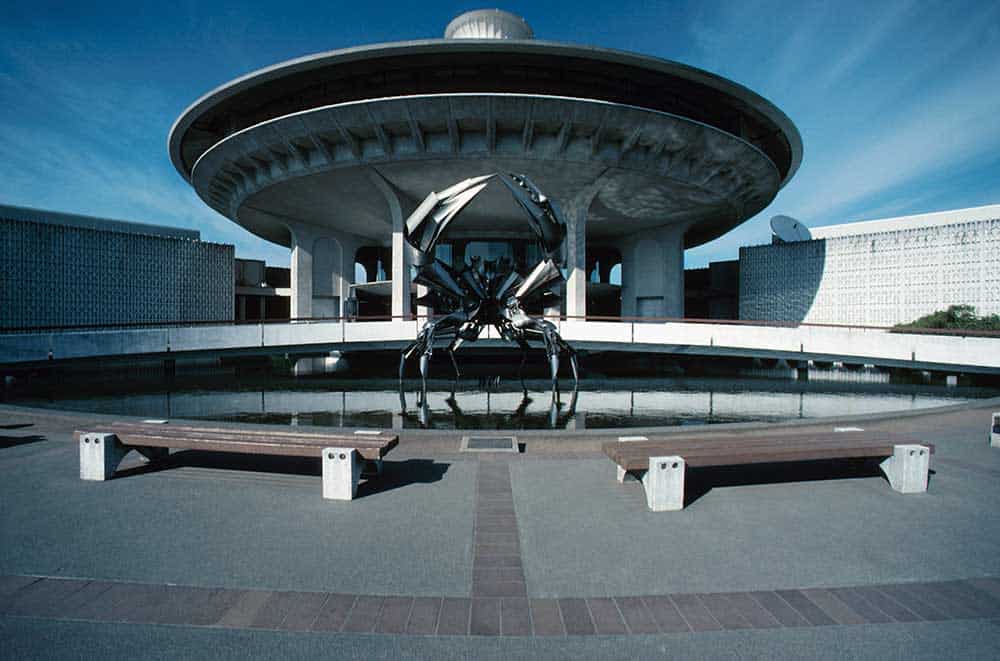 A trip to the aquarium isn’t cheap but it contains dozens of habitats to explore, including the main aquarium. It covers about 9000 square metres and holds over nine million litres of water.

You can see a diverse range of marine life. Take a trip to Penguin Point to see African penguins or visit the Treasures of the BC Coast with its collection of octopuses, sea urchins, and rockfish.

The aquarium also has an Amazon Rainforest section. Try to spot the various species of snakes, sloths, birds, fish, and other rainforest creatures hiding in their natural habitats.

The aquarium has over 50,000 creatures. You won’t have time to see all of them when travelling across Vancouver in 24 hours. Spend an hour or two appreciating the beauty of the animals before moving on.

Shop the boutiques on Robson Street in the West End

After the aquarium, you get to hit the streets of Vancouver, starting with busy Robson Street. It’s located in the centre of the West End and has the widest selection of boutiques and cafes in the city.

This street is a major thoroughfare, reaching from Stanley Park to BC Place Stadium. It’s one of the oldest commercial streets in the city. Walk east on the street, admiring the skyscrapers and browsing the shops.

As you travel east, you’ll notice that the atmosphere starts to change. The western end of Robson Street is chic and bohemian with its assortment of small shops and galleries. As you approach downtown Vancouver, you’ll find more high-end shops and fewer boutiques.

The entire path also includes many restaurants and dozens of noodle shops. Unless you’re starving, hold off on lunch until you reach the next destination.

Instead of taking Robson Street into the centre of the city, skip the downtown area for now and head south to Granville Island. Take any of the streets south until you reach Pacific Street. Follow the road to Granville Bridge. 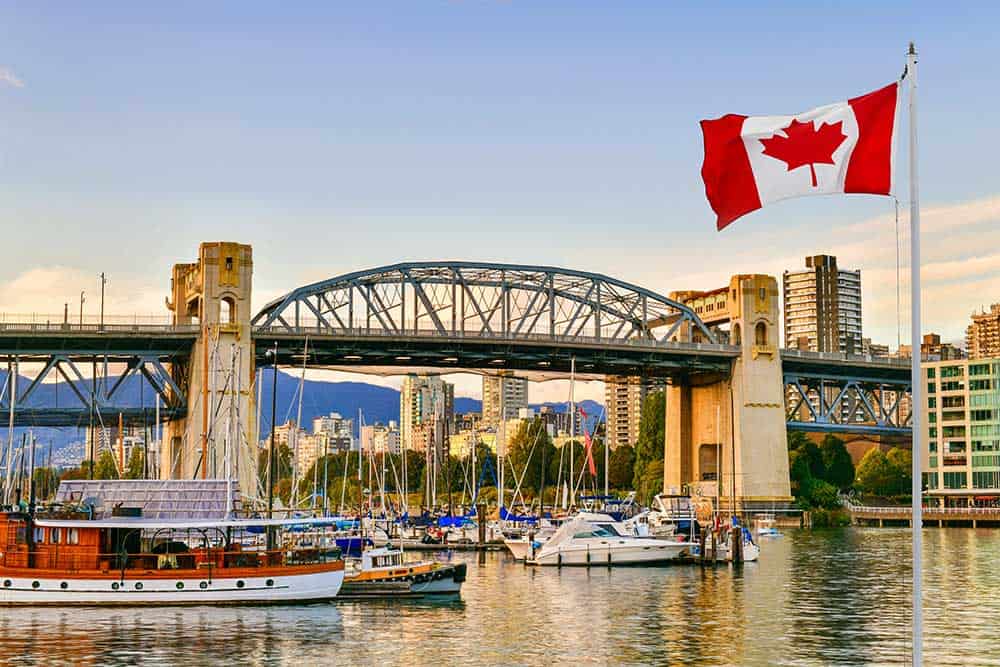 While Granville Island isn’t very big, it contains a few attractions including the sprawling public market and a water park.

If you plan a longer Canada itinerary, you could spend more time on Granville Island. In fact, you could spend an entire day at the water park. For now, you’ll only have enough time to browse the market and find something to eat.

The public market mostly contains vendors and merchants selling produce, seafood, baked goods, and various snacks. It’s one of the busier areas of the city with many visitors comparing it to Pike’s Market in Seattle.

Browse the stalls until you find something that looks appetizing. If you don’t want to walk and eat, you may be lucky enough to find an open seat at one of the snack bars or small eateries inside the market.

Browse artwork and interesting exhibits at the Vancouver Art Gallery

After you finish with lunch, travel north on Granville Street into the heart of downtown Vancouver. When you reach Robson Square, cross the street to the Vancouver Art Gallery (VAG). 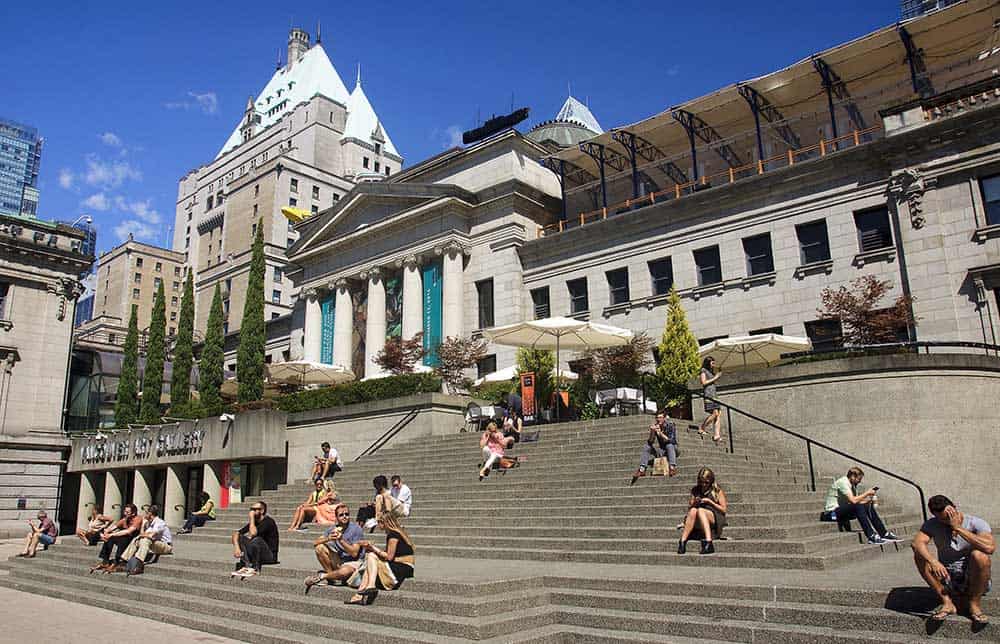 The VAG is a large art museum with over 11,000 pieces in its permanent collection. It also showcases various travelling exhibits so you’ll always find something new.

The collections and exhibits cover a wide range of mediums. It holds paintings, sculptures, multimedia installations, and a large collection of photographs.

The most viewed collection includes works from Canadian painter Emily Carr. You can also view pieces from indigenous Canadian artists.

As with the aquarium, the entrance fee is a little steep compared to museums in other major cities. If you want to get your money’s worth, take the guided tour and learn more about the pieces that you examine.

Spend two to three hours on the tour or walking around the museum before taking a small detour to the gift shop. You can pick up a few souvenirs or rest your legs for a moment.

Along with the art gallery, the downtown area is home to some of the top things to do in Vancouver. If you come back for a longer trip, you could spend an entire day exploring the various galleries, theatres, and public squares.

When you’re done admiring the art, it’s time to see more of the city from the top of Vancouver Lookout. Walk north on Hornby Street, located behind the gallery, until you reach West Hastings Street. 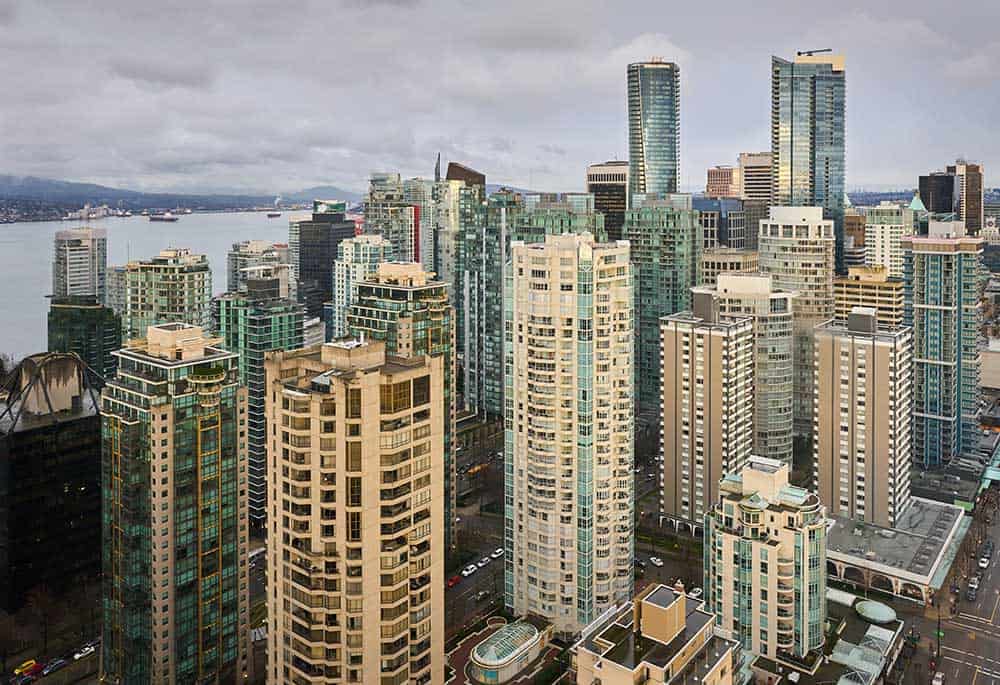 Turn right and Vancouver Lookout is just a couple of blocks away. Due to the height of the tower, you can’t miss it.

You can’t visit every site in Vancouver in one day but you can see most of the city from the top of the lookout point. The tower stands almost 150 metres high.

You ride a glass elevator to the top with views of the city as you reach the observation deck. The deck provides a 360-degree view and includes the typical gift shop and pricey lounge.

If you time the trip right, you should arrive at the best time to see the city. As the sun sets, the lights from the buildings create a stunning view.

Spend the evening walking around Gastown and the Port of Vancouver

From the Vancouver Lookout, it’s a short walk to the Gastown Steam Clock and the dozens of restaurants and bars located near the waterfront. First, check out the Steam Clock. 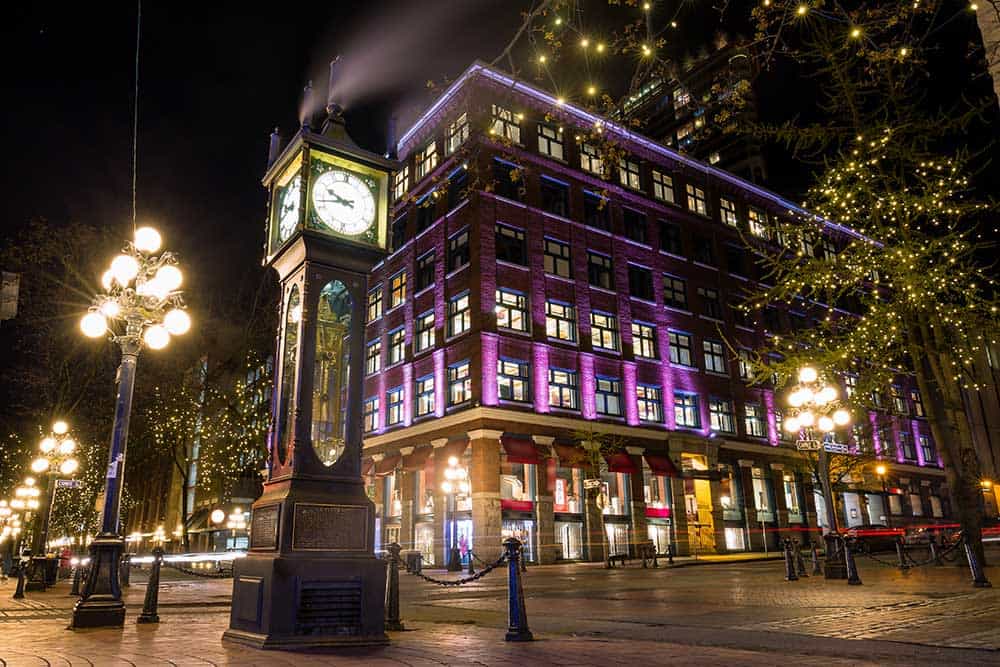 The clock isn’t technically steam-powered anymore. Due to the noise of the steam engine, it’s now powered by an electric motor. It’s still a cool attraction, producing a puff of steam every hour and whistling a short tune every 15 minutes.

After inspecting the clock, explore the rest of Gastown and the Port of Vancouver. These are the oldest parts of the city with Victorian-style architecture and rows of brick buildings. Stroll the waterfront and the cobblestone streets of Gastown looking for a place to eat or drink.

Finish off your trip around the city with dinner or a nightcap near the waterfront. If you’re not ready to call it quits, travel back to the West End for its vibrant nightlife.

Where to stay: The best hotels for 24 hours in Vancouver

As Canada’s third-biggest city, choosing where to stay in Vancouver can sometimes present a challenge. There’s a tremendous diversity of neighbourhoods in Vancouver each with its own advantages. For most first-time travellers with a quick layover in Vancouver, the downtown area is the best place to stay. Here are a few hotel ideas to start your search…

Beyond Vancouver in one day: More Canada itineraries