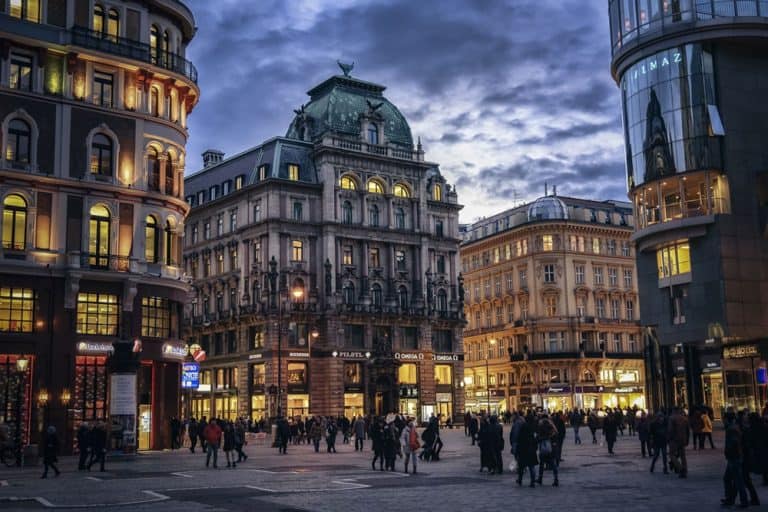 The walkable, charming city of Vienna offers plenty of reasons to visit. Thanks to notable residents such as Beethoven and Mozart, Vienna is not just the best destination in Austria for art lovers, but has one of the finest artistic & cultural legacies in all of Central Europe.

The city also embraces this legacy and is known for its artsy atmosphere, along with imperial palaces, narrow roads, and numerous coffee houses. Unfortunately, if you’ve only got one day in Vienna, immersing yourself in the culture becomes a challenge.

Not sure what to do during your stay? Plan your trip with this complete 1-day Vienna itinerary…

What to do in Vienna in 24 hours: A complete one-day itinerary

With just 24 hours in Vienna, you don’t have time to see everything, but you can visit several significant sites and get a taste for the city.

As with our other one-day city itineraries, you could spend most of the trip on foot. Most of the sites are situated within the central Inner Town.

While Vienna is a highly walkable city, if you need to, you can save time by utilizing the local bus system. A single day pass allows you to hop on and off at any point throughout your trip. Quickly travel between sites, such as St. Stephen’s Cathedral and the Hofburg Palace.

Get caffeinated at Café Havelka

If you want to see as much of Vienna in one day as you can, you’ll need energy. Fuel up with a hot cup of coffee at one of the many cafes in Inner Town.

Café Havelka is one of the most popular coffee houses in the central part of the city. It’s also near several of the sites that you’ll visit first during your Austria itinerary.

The coffees and snacks are a bit expensive, but well worth it. You’ll feel ready to tackle the day after a strong coffee and tasty pastry.

It’s best to get there early, as the coffee houses fill up throughout the morning. If the line at Café Havelka is too long, go around any corner in the area and you’ll find another café to try.

The best coffee houses are in the Stephansplatz, the large public square that surrounds St. Stephen’s Cathedral. The area is always bustling by mid-morning and a great place for people watching.

After coffee and a pastry at Café Havelka, simply walk a few steps to reach St. Stephen’s Cathedral. The cathedral is the most iconic landmark in the city, recognizable for its ornately tiled roof and the 500-foot-tall South Tower. 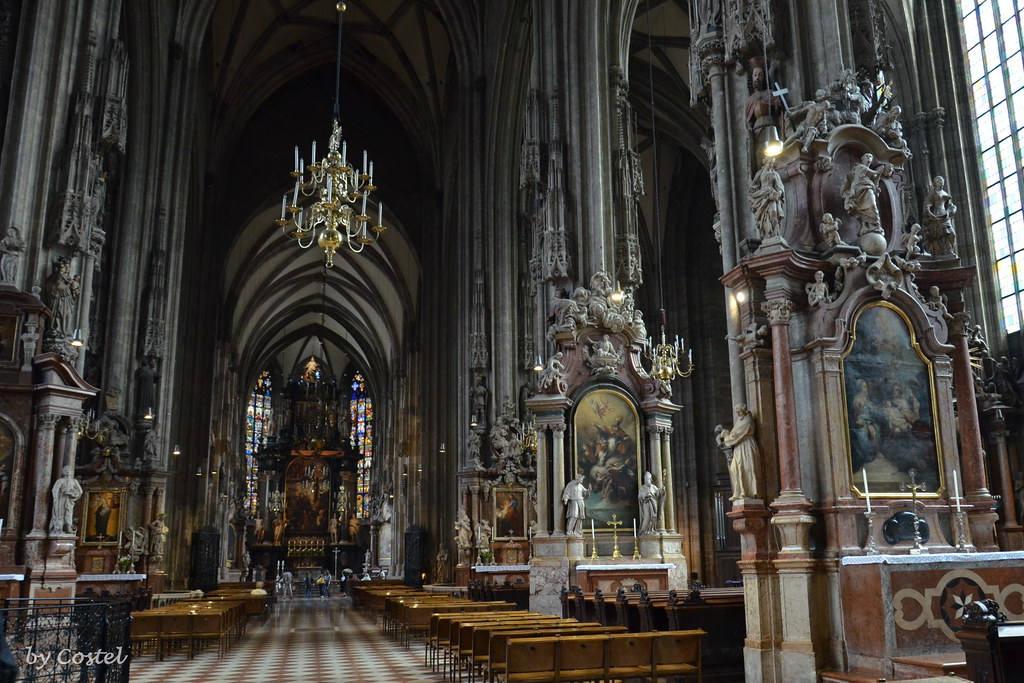 The roof includes over 230,000 glazed tiles and measures over 111 metres long. The tower is also a marvel, offering sweeping views of the city.

The bell tower plays an important site in musical history. Standing outside the cathedral, Beethoven discovered the severity of his deafness watching birds fly out of the bell tower without hearing the bells.

The cathedral has a memorial tablet dedicated to Mozart. Shortly before his death, he was elected the music director of the cathedral.

As with many Gothic-style churches, the cathedral has numerous depictions of saints, martyrs, and religious symbols. These depictions include etchings, statues, and reliefs found throughout the interior and exterior of the building.

The focal point and most detailed part of the church is the High Altar. It includes four large panels that open to reveal scenes involving 72 saints.

If you’re visiting Vienna in winter, the square outside of the cathedral, Stephansplatz, is home to one of Vienna’s most famous Christmas markets. Be sure to check it out if you want to infuse your Vienna itinerary with a little festive cheer!

Window shop along the Kartnerstrasse

When you finish exploring the details of St. Stephen’s Cathedral, start walking south on Kartnerstrasse.

Along the way, you’ll pass centuries-old buildings that once housed old shops and factories. Most of the old charm is gone, as the preserved buildings now house modern establishments, including several national clothing stores.

This pedestrian street is the main shopping street in the city, where you’ll find many designer shops and high-end boutique stores. The atmosphere is vibrant, with crowds from food stalls and café terraces spilling out into the streets.

Some of the side streets also include a few hidden gems. These small, quaint shops and cafes tend to get a little less foot traffic compared to the spots on the main thoroughfare.

If you’re starting to get a little hungry or thirsty, stop at one of the stalls or cafes for a quick bite or drink.

The street ends at the State Opera House, but you can turn west when you reach Capuchin Church and the Maltese Church. These two churches flank both sides of the street just before the Opera House.

Experience imperial life inside the Hofburg

After turning west when you reach the churches, follow the winding road northwest to the large Michaelerplatz. 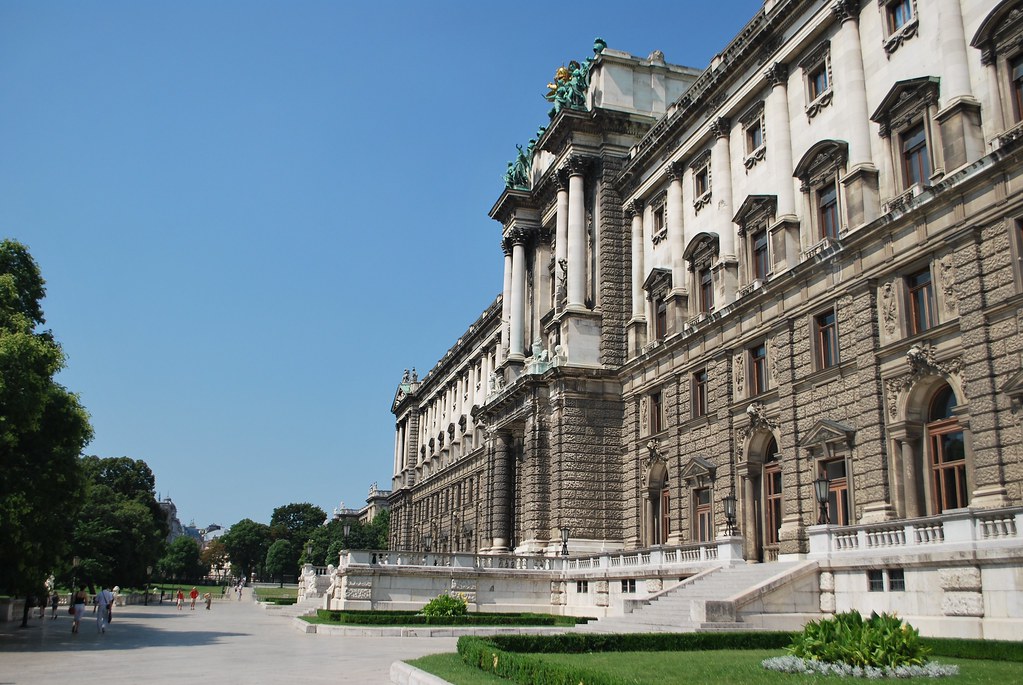 The open public square includes a display of ruins of a Roman wall and village settlement, but the real reason to stop here is the Hofburg.

The Hofburg is the Imperial Palace of Vienna. It’s one of the biggest palace complexes in the entire world, with wings that extend several blocks. The exterior is intimidating, stretching out for many metres and featuring a totalitarian-style design.

Inside the palace, you’ll find three historic museums containing exhibits that help explain the history and traditions of the imperial court.

The Imperial Apartments are ornately decorated with the original furnishings, giving you a taste of royal life during the Habsburg Empire. The second museum is the Sisi Museum, containing examples of the staging areas for the Empress.

The third museum is the Imperial Silver Collection. It contains a wide range of fancy utensils and tableware used in the imperial court.

This is another site where you could spend an entire day exploring every little detail. Unfortunately, you’ll need to keep moving to complete everything on this itinerary.

Stand in awe at the Austrian National Library

You don’t need to travel far to reach the next site, as it’s housed inside one of the wings of the Hofburg. 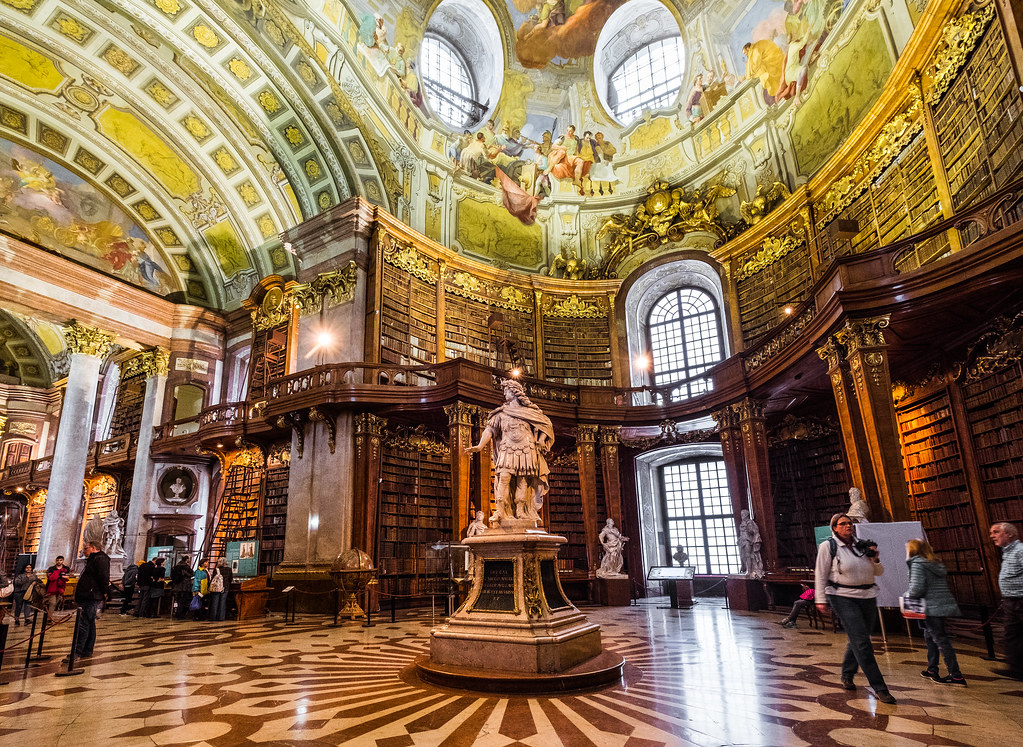 While there are many things to do & see in Vienna, the Austrian National Library stands out for its impressive collection of valuable manuscripts and historic treasures.

As soon as you step inside the state hall of the library, you’ll feel dwarfed by the surrounding frescos, statues, and towering shelves of books. The hall is over 80 metres long and features a roof 20 metres high.

The library currently contains over 12 million items and 200,000 books and manuscripts. It also has four museums, several special collections, and an archive.

The library also has a dark connection to the Nazi regime. During World War II, the director of the museum helped illegally seize valuable items from Jewish citizens.

In 2003, the library began efforts to return as many items to their legitimate owners as possible. In the following years, the library has returned over 32,000 artifacts. It’s an interesting side note for an otherwise majestic destination.

When you leave the library, you’re just a short walk from Vienna’s Ringstrasse. The Ring Road is a circular boulevard that surrounds the historic Inner Town of Vienna. 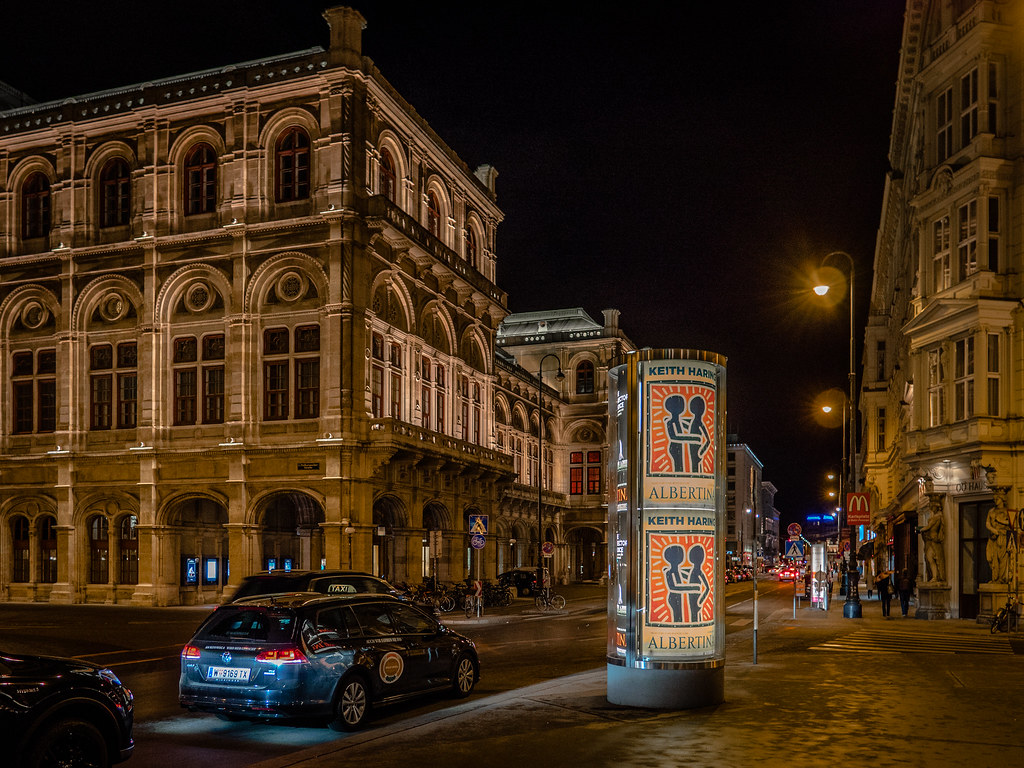 The road has become a UNESCO World Heritage Site. It was contrasted with parts of the old city walls and provides access to some of the most important historic buildings in the city. Walking the 5.4-kilometre road takes a little over an hour if you don’t stop and gawk at every ancient structure. To save time, consider taking the tram.

One of the best ways to see more of Vienna in 24 hours is to take a tram around this loop. The tour allows you to sit back, relax, and see the historic sites. The tour also includes helpful tidbits of information about the sites that you pass, including the Opera House, the Parliament Building, the State Theater, and the Town Hall.

The city has a couple of tram routes. Get on the one near the Opera House, just around the corner from the Austrian National Library. This route takes you to Schwedenplatz, another large public square with more cafes and restaurants.

Get a taste of the local cuisine from one of the nearby market stalls or restaurants before crossing the river.

Enjoy views from the Ferris wheel at Prater Park

A short bridge takes you to the Leopoldstadt neighbourhood, home of Prater Park. The park is the last stop on your journey and one of the most entertaining spots in the city, especially if you’re travelling to Vienna as a couple! 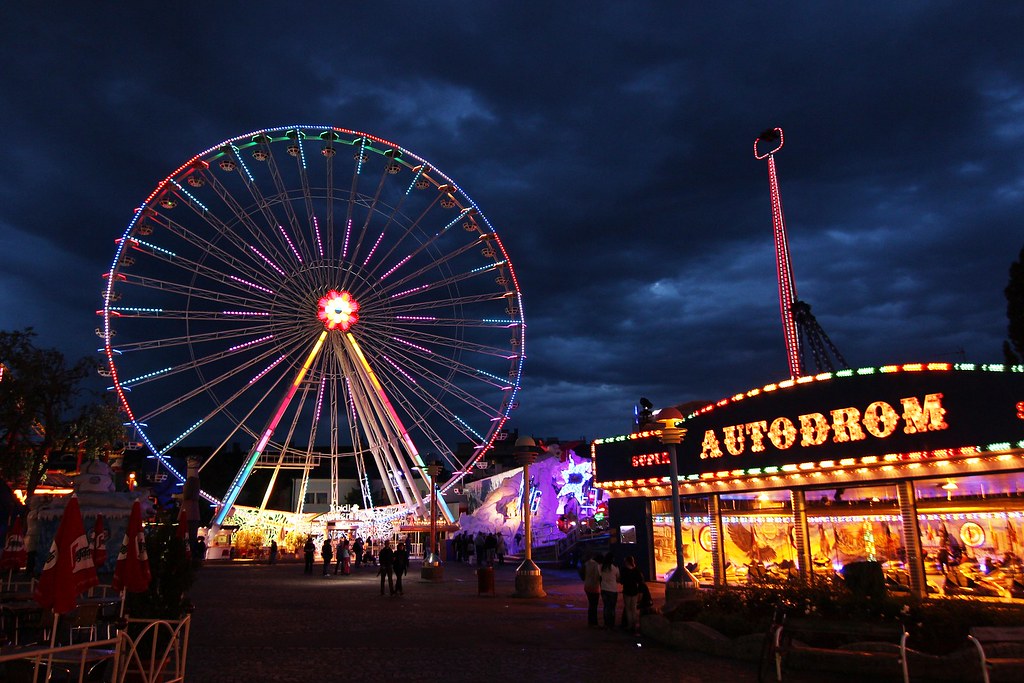 This small amusement park was opened to the public in 1766 and includes numerous attractions, including a large Ferris wheel, roller coasters, carousels, and bumper cars. The park even has its own Madame Tussauds waxworks exhibit.

You don’t need to worry about time, as the park stays open until 1am between March 15th and October 31st.

If you’re visiting during the holidays, check out the small Christmas market. The winter market opens in November and includes traditional Christmas gifts and seasonal foods.

Finish up your tour of the park with a ride on the Ferris wheel. From the top, you can see most of the city and the various stops from your Vienna itinerary.

Where to stay: The best hotels for 24 hours in Vienna

Like other big Central European cities, choosing where to stay in Vienna can sometimes be a challenge. (The city stretches out over 400 square kilometres, sprawling both sides of the Danube River!)

Fortunately for most travellers who just have a quick layover in Vienna, most of the city’s top attractions lie within the Innere Stadt, making it the clear-cut choice for where to stay. Get your accommodations search started with these top hotels in Vienna…