As the largest city in the Canadian province of Alberta and the second-largest in Western Canada, sorting out where to stay in Calgary is essential for planning the ultimate trip to Canada’s incredible west.

Fortunately for travellers, the choice is not so difficult. Most of the best hotels in Calgary are situated in & around Downtown Calgary. Conveniently, the downtown area is also home to many of the top things to see & do in Calgary and to the city’s main festivals including the world-famous Calgary Stampede.

Ready to get your Calgary accommodations booked? Get started with this complete guide to the best places to stay in Calgary including the top areas, neighbourhoods & hotels for visitors…

Best places to stay in Calgary

Straddling the banks of the Bow River, Calgary is the fourth-largest city in Canada and the most populated city in Alberta.

Thanks to its location in the foothills of the Canadian Rockies, Calgary is also often considered the urban gateway to Canada’s rugged & beautiful west including some of Western Canada’s top outdoor destinations such as Banff and Jasper.

With the Albertan city’s size & popularity with travellers comes the dilemma of choosing where to stay in Calgary.

Fortunately, Calgary is quite compact and easy-to-navigate. Many of the best hotels & accommodations options in the city fall within the neighbourhoods in & around the downtown core. These areas are also home to many of the top tourist attractions in Calgary.

The best areas to stay in Calgary include:

✔ Best area to stay in Calgary for first-time visitors & sightseeing

If you ever needed a quick & easy answer for where to stay in Calgary, it’s simple: Downtown Calgary

Downtown is the financial & cultural hub of Calgary and home to the city’s top restaurants, cafés, bars, shopping experiences, and some of the most  popular tourist attractions including Calgary Tower, the Glenbow Museum, and Studio Bell, home to the National Music Centre. 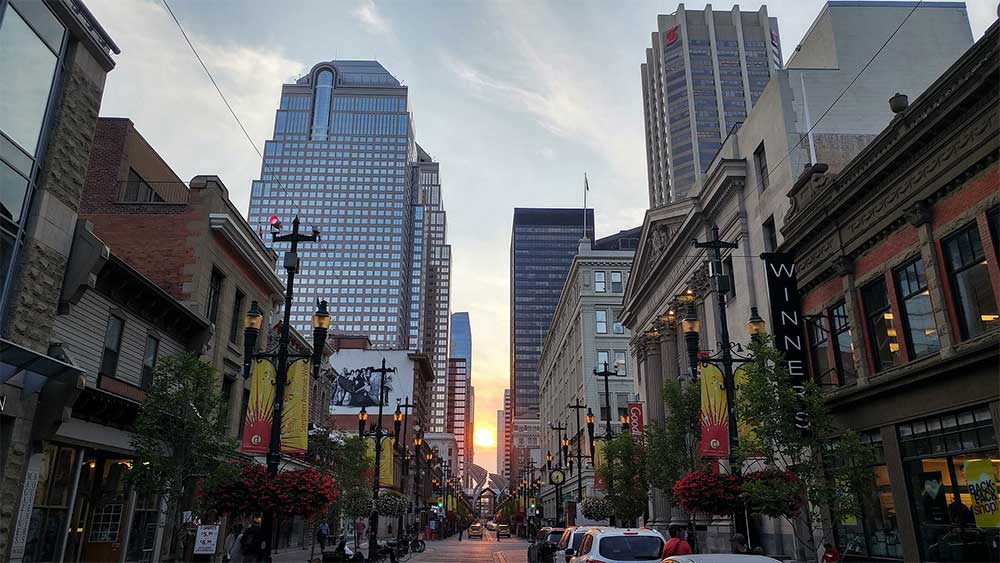 Much of the action in Downtown Calgary resides along Stephen Avenue (8th Avenue SW) between 1st Street SE and 4th Street SW.

There’s a ton to do around here including eating & drinking at the barrage of cool restaurants, bars & cafés or roaming about the sizeable Core Shopping Centre and Banker’s Hall, offering two of Calgary’s finest shopping experiences.

As you’d expect from the prime location, hotels in Downtown Calgary tend to fetch a premium compared to other areas. Thanks to its selection of great luxury hotels, it’s also the perfect neighbourhood for a luxe getaway in Calgary.

If you’re keen on making the most of your trip, it’s well-worth the extra cost to saddle up in downtown!

✔ Best neighbourhood to stay in Calgary for nightlife & entertainment

Located just south of the downtown core, The Beltline is the coolest place to stay in Calgary for travellers looking to partake in the city’s nightlife and entertainment options.

The neighbourhood is located between the Calgary LRT to 17th Avenue SW and bordered by 14th Street SW and the Bow River to the east. 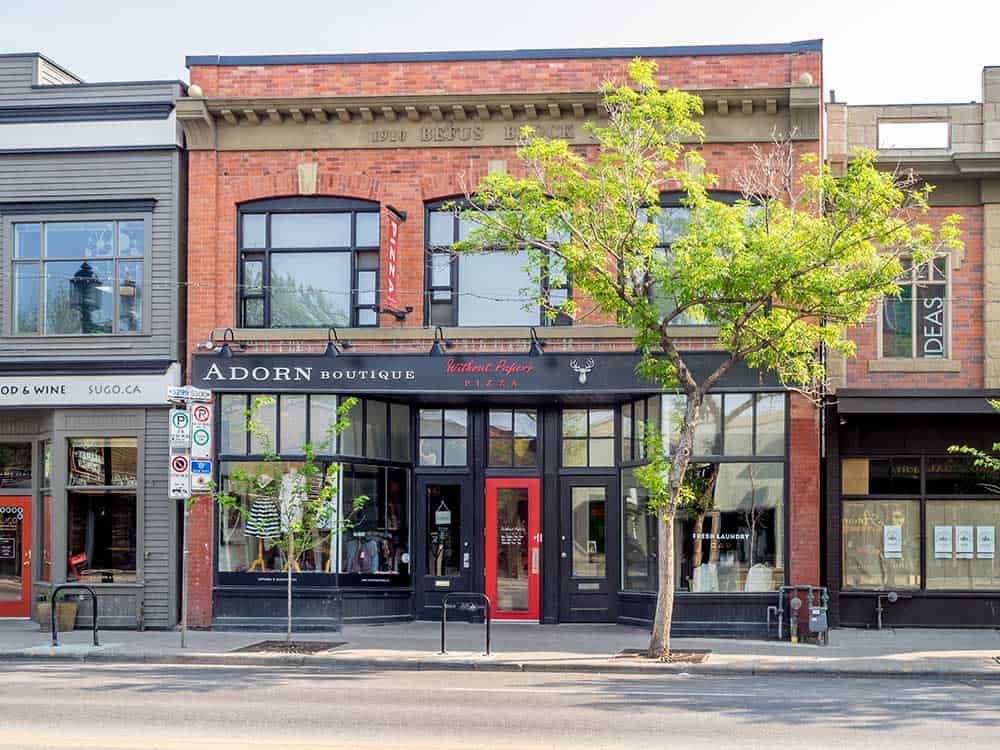 For a great night out in Calgary, head for 17th Avenue SW. The Beltline’s action-packed main street, running west from the Calgary Stampede grounds and BMO Centre (formerly called the Saddledome), is home to many of the city’s most popular bars, nightclubs, and restaurant.

While you’ll no doubt catch a crowd throughout most of the year, The Beltline is at its craziest during the Calgary Stampede, taking place every July, and when the Calgary Flames are playing at the nearby BMO Centre (and especially when they’re making a Stanley Cup Playoff run!).

If you’re visiting Calgary during Stampede or planning to take in a hockey game or concert, you’d do well to stay in The Beltline.

Like the northern part of downtown, the accommodation prices in The Beltline tend to be a little higher than elsewhere in Calgary.

Emerging recently as one of the trendiest neighbourhoods in Calgary, East Village is a great choice if you’re looking to blend in a more local feel to your time in Calgary.

The East Village area is wedged between downtown to the west and The Beltline to the south with the Bow River forming its eastern edge. Thanks to its great location, it’s a quieter alternative to the other two top areas. 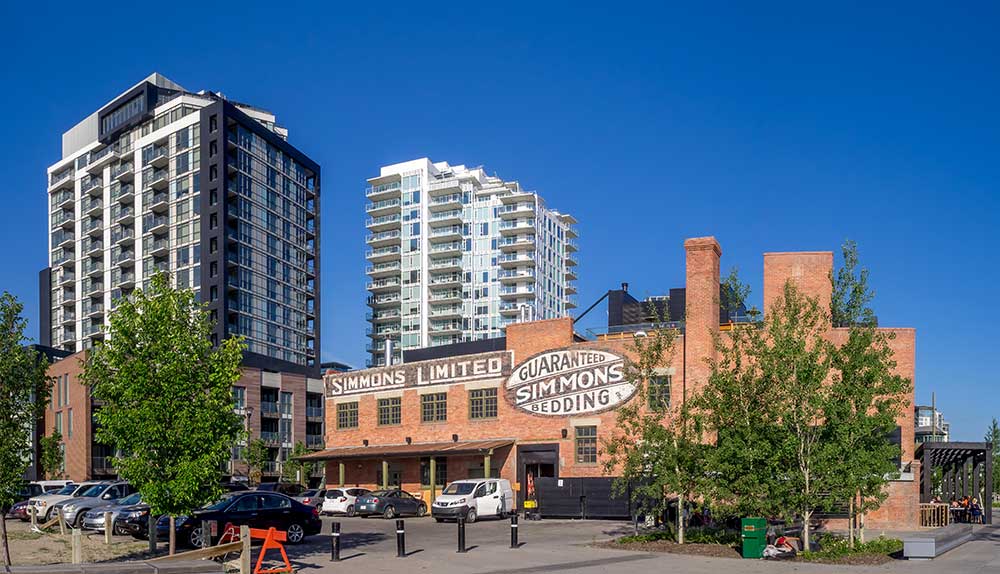 Even though it’s a little east of the city centre, there’s a handful of attractions in & around East Village including St. Patrick’s Island and Fort Calgary. Music fans will also get a kick out of Studio Bell, home to the National Music Centre and the King Edward Hotel, Calgary’s most famous historical live music venue.

The accommodation selection in East Village isn’t huge. There are, however, a small handful of hotels, apartments, and rental-by-owner properties that will suit the bill if you choose to stay here.

If the hustle & bustle of central Calgary is too much for your tastes, head southeast to Inglewood.

This beautiful area is one of the only places in Calgary to catch a glimpse of the city’s historical roots. As you wander about Inglewood, you’ll discover small local shops, restaurants, and bars hiding in handsome historic buildings that date back to Calgary’s earliest days. 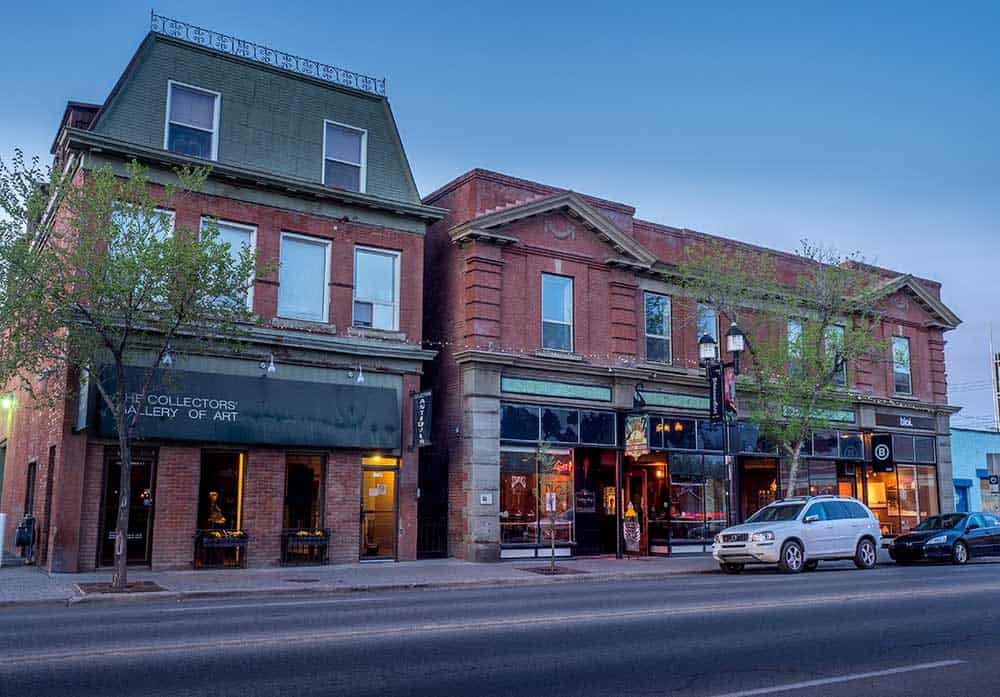 Inglewood is a quieter place to stay than the city centre, adding a more local element to your visit to Calgary.

It’s one of the better options in the city for visitors eyeing an extended visit in Calgary with their own car as its a little far-removed from most the main attractions. The one exception is the Calgary Zoo, located just north of the district over the Bow River.

Located on the northern banks of the Bow River, Kensington is a great choice for travellers looking for a quieter local experience in a trendy neighbourhood that’s just steps from the city centre.

Kensington along with Hillhurst to the north are chock-loaded with cool & trendy local cafés, bookstores, pubs, ramen bars, and relaxing greenspaces.

In recent years, it’s become one of the most popular areas to live in Calgary for young professionals & families—why not test it out for your stay, too?