Chiang Mai is one of the most beautiful destinations in Thailand. It has the highest mountains in the country. These are the perfect backdrop to the old city centre that’s also surrounded by a moat. It’s a city that holds on to tradition. Once the seat of the Lanna Kingdom, the city maintains portions of old walls and gates along with several historic villages.

While the city offers everything from world-class shopping to nightlife, it’s a lot more laid back compared to the bustling city of Bangkok.

Due to the variety of things to see and do in the city, choosing where to stay in Chiang Mai isn’t easy. The city sprawls beyond the old city to cover an area full of modern developments.

Near the Ping River, you’ll find a vibrant nightlife, river cruises, and a variety of resorts. To the west, you’ll discover a trendy neighbourhood with cafes and bars.

Not sure where to search? Start looking for accommodations with this guide to the best places to stay in Chiang Mai:

Where to stay in Chiang Mai: The best areas & neighbourhoods

Chiang Mai is the largest city in the northern part of Thailand. The metro area covers close to 3000 square kilometres and includes over a million residents. It’s a diverse city with lots of interesting attractions and historic landmarks. 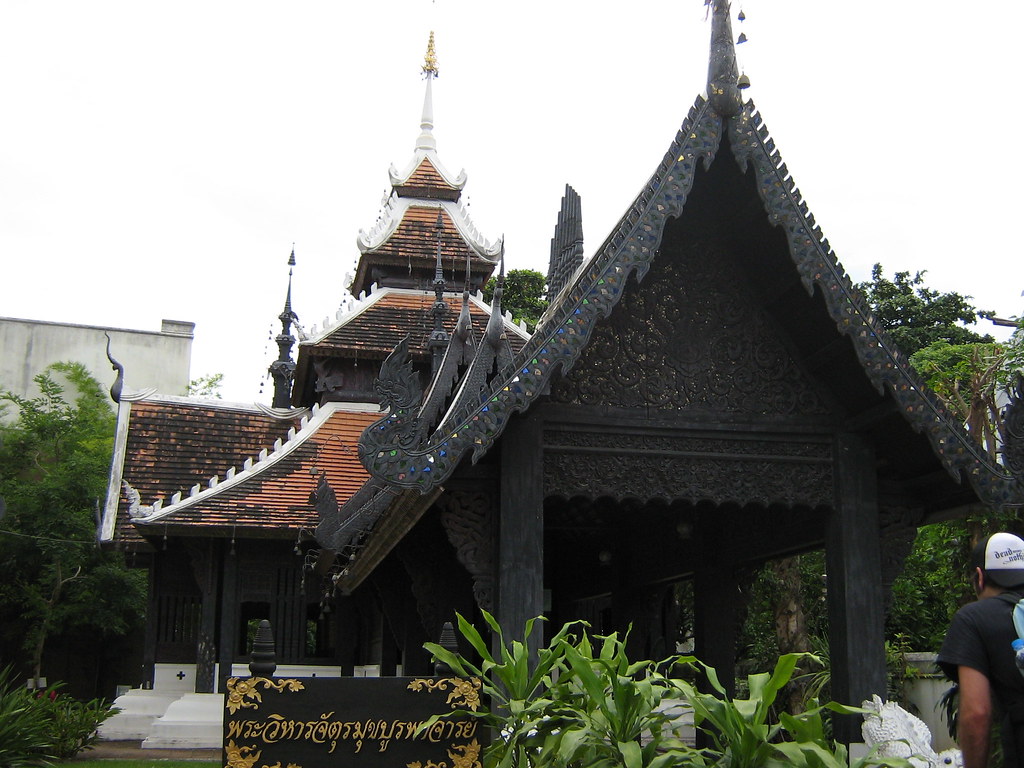 As with other major Thailand cities, it has numerous old Buddhist temples or wats. A few of the most visited are found in the old city but you’ll also find others scattered throughout the greater Chiang Mai area.

While the historic and cultural sites remain top reasons to visit, many tourists also flock to the city’s zoos and national parks, including Doi Suthep National Park. The park encompasses the mountain range and includes two of the highest peaks in the country.

A few of the best areas to stay in Chiang Mai for travellers include:

✔ Best area to stay for sightseeing and history buffs

If you’re trying to visit all the top attractions in Chiang Mai, Old Town has you covered. Also called the Old City, it’s the central part of Chiang Mai and home to many of the city’s landmarks. 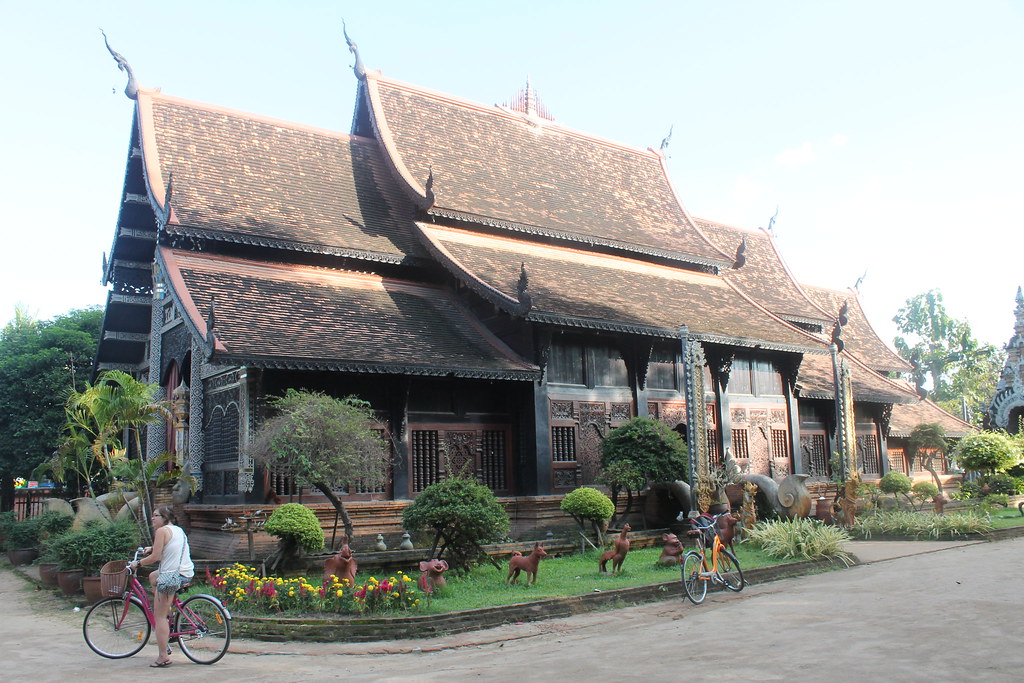 Shortly after the founding of the city, the rulers built a moat and a defensive wall. Over 700 years later, the moat and parts of the wall remain. The old city includes the area inside the boundaries of the moat.

While the old city includes many of the historic sites, it also has a modern skyline. The district includes recently built hotels, resorts, and commercial strips. The blend of old and new has helped Chiang Mai become a thriving city, attracting millions of tourists each year.

You can spend most of your trip on foot exploring the nearby attractions. Start with the famous wats, including Wat Phra Singh. You can also visit pedestrian shopping streets, tour museums, and travel under the old city gates.

On Sundays, check out the walking street market that features hundreds of stalls and street performers. The rest of the week, you’ll have access to a diverse selection of Thai and Western-style restaurants.

The Old Town area includes dozens of great hotels to choose from. It’s got something for everyone. You can find affordable hotels with simple amenities or splash out on luxury accommodations with 24-hour concierges. No matter where you stay, you’re never more than a few blocks from a temple.

✔ Top area to stay for foodies who love shopping

The sub-district of Haiya is mostly known for Wualai Road. On Saturdays, the road becomes a walking market street. The market opens in the afternoon, always packed with vendors selling everything from locally made goods to clothing and street food. 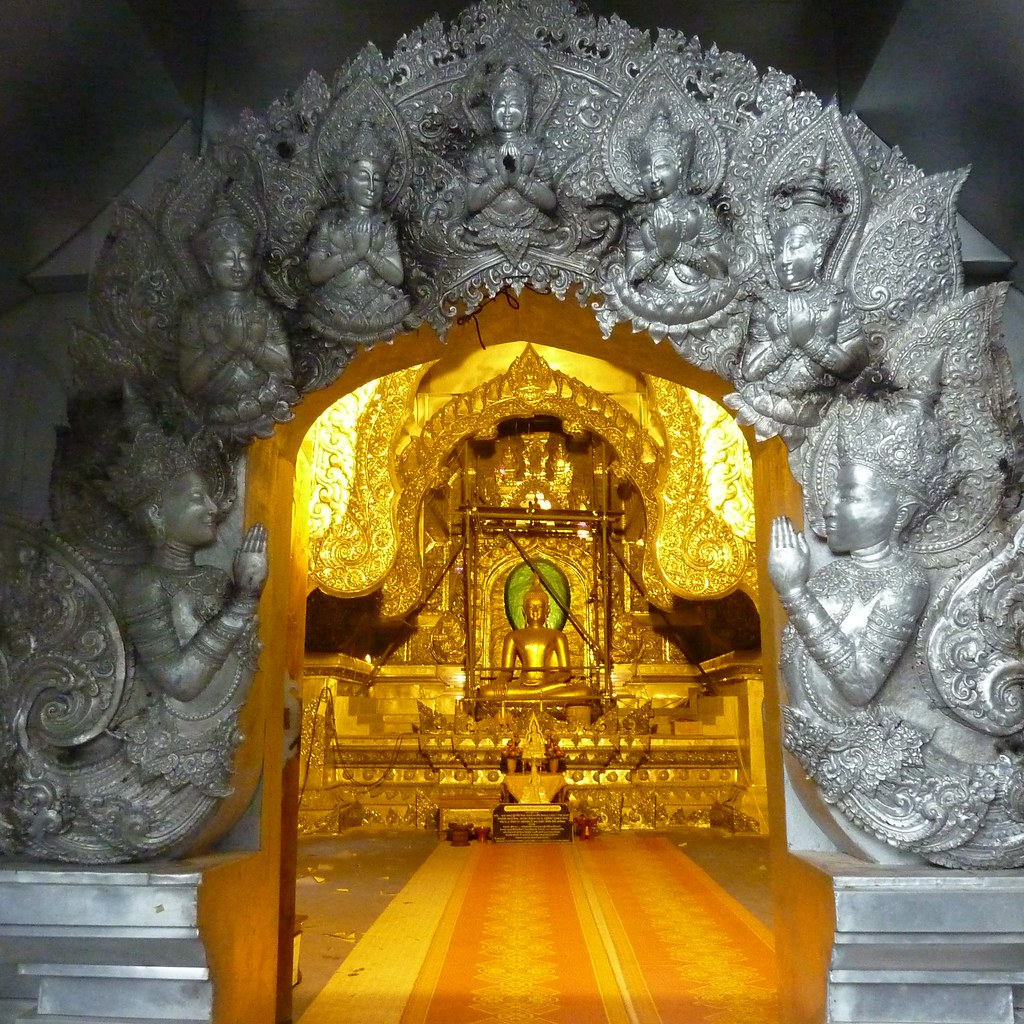 If you enjoy food and shopping, the market should keep you happy. Taste authentic Thai food including fried rice and pad Thai or barbecued fish. Some of the street food items include sweets and smoothies that you can finish as you browse the hundreds of stalls.

As with the other districts, Haiya also has a selection of wats to visit. A block from the night market, you’ll find Wat Sri Suphan. This temple stands out from the others in the city for its interesting exterior and interior.

While most of the temples feature gold leaf décor, Wat Sri Suphan is entirely adorned in silver. The walls, roof, statues, and décor all feature silver.

Depending on where you stay, you may find yourself just a short walk from the attractions beyond the moat. If checking out the temple or the market, you can ride a tuk-tuk to the old city for more shopping and sightseeing.

The hotels in the Haiya district tend to be smaller but they still provide luxury options. The top choices include hotels near the border with the old city, making it easier to reach the nearby attractions. The hotels to the south often cost less and provide closer access to the airport.

✔ Recommended area to stay for luxury travellers and families

If your Chiang Mai itinerary includes stops at Doi Suthep National Park and the surrounding area, consider staying in Nimmanhaemin. This sub-district is halfway between the national park and the old city. It’s also considered the trendiest part of the city. 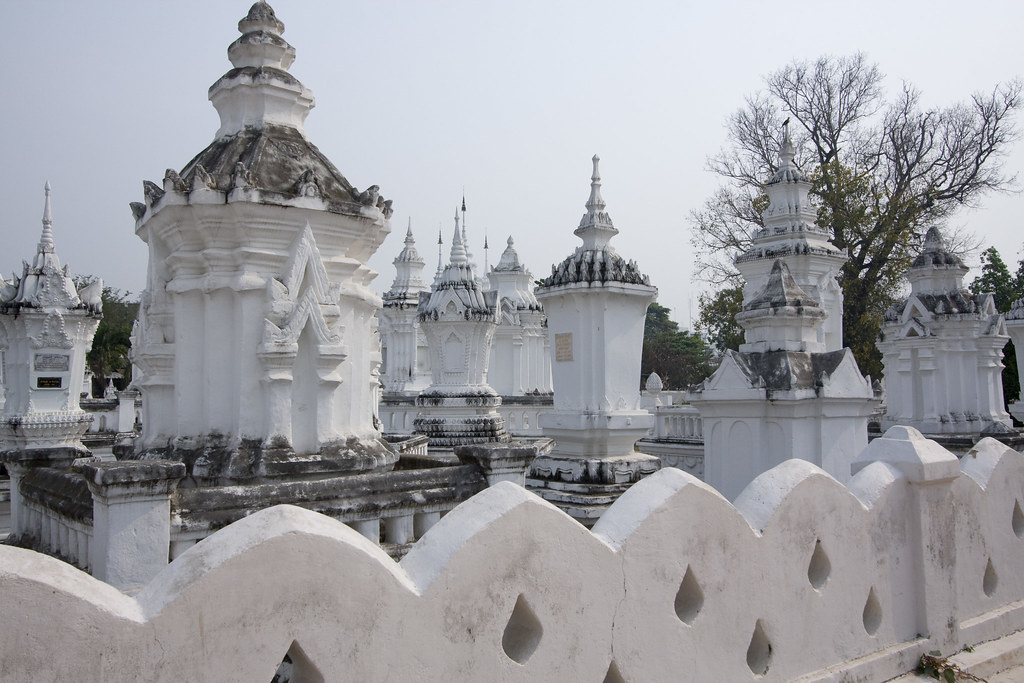 Nimmanhaemin “Nimman” Road runs through the centre of the district. It contains a large collection of high-end restaurants, bars, cafes, and boutique shops. The northern part of the district also contains a massive shopping mall while the central area includes the city’s university neighbourhoods.

While parts of the district cater to university students and those seeking nightlife, it’s also the best area for families. The luxury shops and hotels provide a safe, comfortable retreat for you and the kids. Nimman really offers something for everyone, from peaceful relaxation to the area’s best bars and shops.

As with other sub-districts in Chiang Mai, Nimman is just a short trip from some of the top things to see in the city. You can shop, eat, and sleep in Nimman while venturing to the neighbouring districts for sightseeing excursions.

The Nimman area includes all types of accommodations from hostels to apartments. Of course, it also has hotels, mostly found in the central neighbourhoods near the local technical college. These options are also near the main bar streets and galleries in the district.

✔ Top neighbourhood to stay for nightlife and fine dining

It’s still a laid-back sub-district but it’s also one of the best areas for entertainment. The riverside area includes a combination of luxury and old-world charm. You’ll find live music spilling out of the bars and various boutiques selling a wide range of handicrafts.

The area across the river is a bit trendy and quirky. It’s where you’ll find some of the more interesting museums and attractions, including various art galleries.

This district also contains the popular night bazaar. The Chiang Mai Night Bazaar is its own neighbourhood, covering four blocks of the district. The bazaar is a sprawling market with hundreds of vendors and typically opens around sunset and stays open for four or five hours.

Chang Moi has some of the best hotels in Chiang Mai. These accommodations provide easy access to the old city and the area along the river. You’ll also find plenty of high-end resorts and business hotels.