During any trip to Finland, you’re bound to visit Helsinki. It’s the vibrant seaside capital and the most visited area of the country. Located on the edge of the Baltic sea, the cosmopolitan city blends nature, modern marvels, and several historic sites together to create a truly unforgettable destination.

It’s a great place, but one day in Helsinki doesn’t leave a lot of time for exploring. From the museums to Michelin-rated restaurants, the city is packed with attractions to keep you busy. Trying to see it all is almost impossible.

Not sure where to start your trip? Choose your stops with this complete 1-day Helsinki itinerary…

What to do in Helsinki in 24 hours: A complete one-day itinerary

While 24 hours in Helsinki doesn’t leave a lot of time, you’ll get to see a large chunk of the city. This trip to Helsinki hits most of the top attractions, as with all our city travel plans.

The city spreads out from the harbour, becoming more modern as you travel away from the historic architecture near the sea.

Start your day with strong coffee at Market Square

To see as much as you can of Helsinki in 24 hours, you’ll need to maintain your energy. Start your day as a local would, with a strong cup of coffee. The locals are known for their love of coffee and the cafes take their brew very seriously. 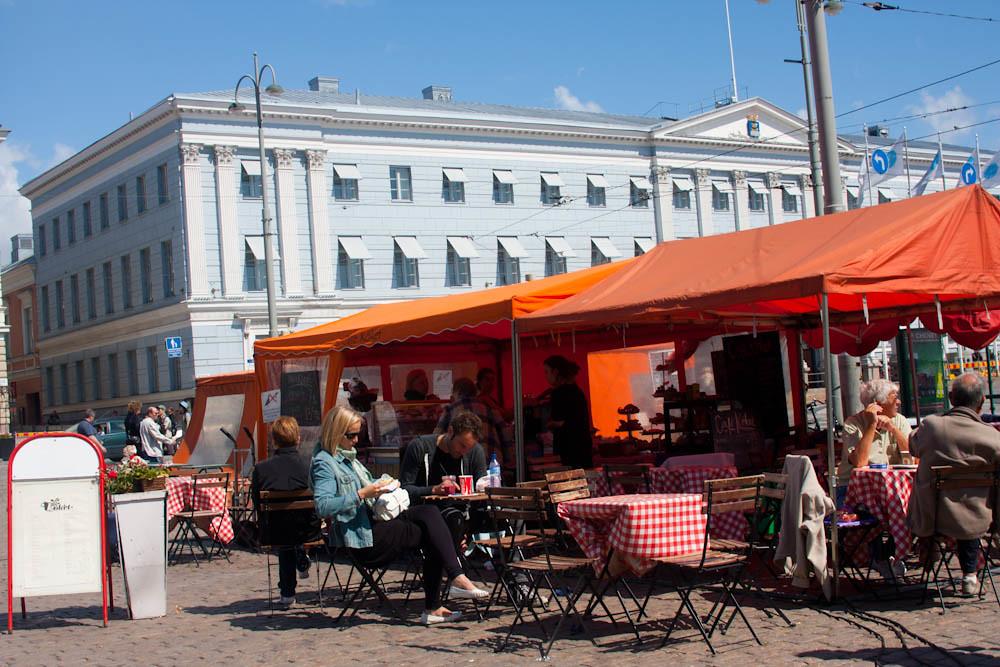 You’ll find the best coffee at Market Square. Get yourself a cup of joe and a light breakfast from one of the cafes.

This spot also serves as the perfect starting point for exploring the city. You can orient yourself with the various landmarks visible against the city’s skyline from the open public square.

Depending on how early you start, you may have a chance to browse the other items available as vendors start to set up shop for the day.

The Market Square fills up with stalls selling a variety of goods, from produce to knickknacks. You can also shop for clothing, jewellery, and local crafts.

If it’s raining on the day of your trip, get away from the rain by stopping inside Hakaniemi Market Hall. It’s near the Market Square and includes a diverse selection of souvenir shops and food stalls.

PRO TIP: Want to start the day off right? Get the inside scoop by booking yourself in the fully-customizable Helsinki Local Private Tour!

Catch a ferry to the island fortress of Suomenlinna

After a cup of coffee and breakfast, it’s time to visit the first major landmark on your Finland itinerary. The island fortress of Suomenlinna is across the bay from Helsinki and a short ferry ride away. 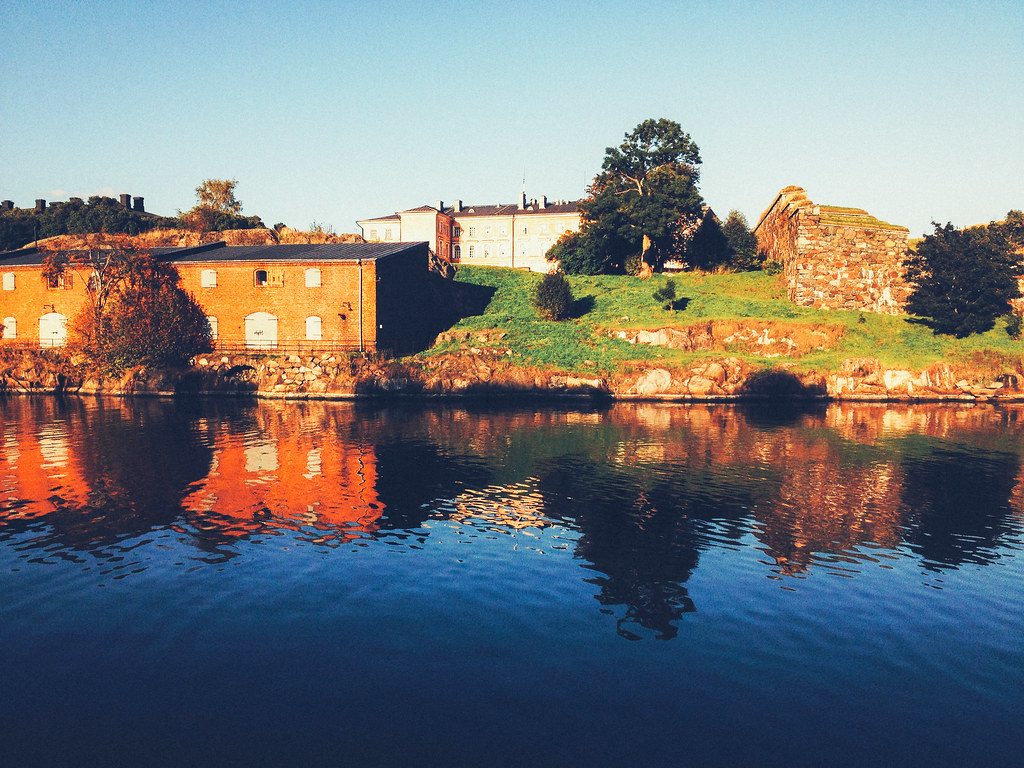 It’s best to visit the island first thing in the morning, as the lines for the ferry tend to get longer throughout the day.

The fortress complex was built during the 18th century and takes about 15 minutes to reach by ferry. During the ferry ride, try to choose a seat that faces the fortress, so you can see it as you arrive.

Spend about an hour wandering around the island and fortress structures. One of the highlights is the Suomenlinna Church. It originally had domes, such as many Russian churches, but the domes were taken down.

The small island also has six museums. You can learn more about the history of the island and Helsinki before departing on the ferry back to the mainland.

PRO TIP: Want to make the most out of your morning? Combine some of the top attractions in the city with a visit to the island fortress on the Helsinki and Suomenlinna Sightseeing Tour! The tour includes hotel pick-up from select Helsinki hotel and a round-trip ferry ticket.

See the city from above on the SkyWheel Helsinki

A ride on the SkyWheel is one of the more interesting things to do & see in Helsinki. From the top, you’ll get to look out over most of the city and the sea. It provides one of the best panoramic views of the area. 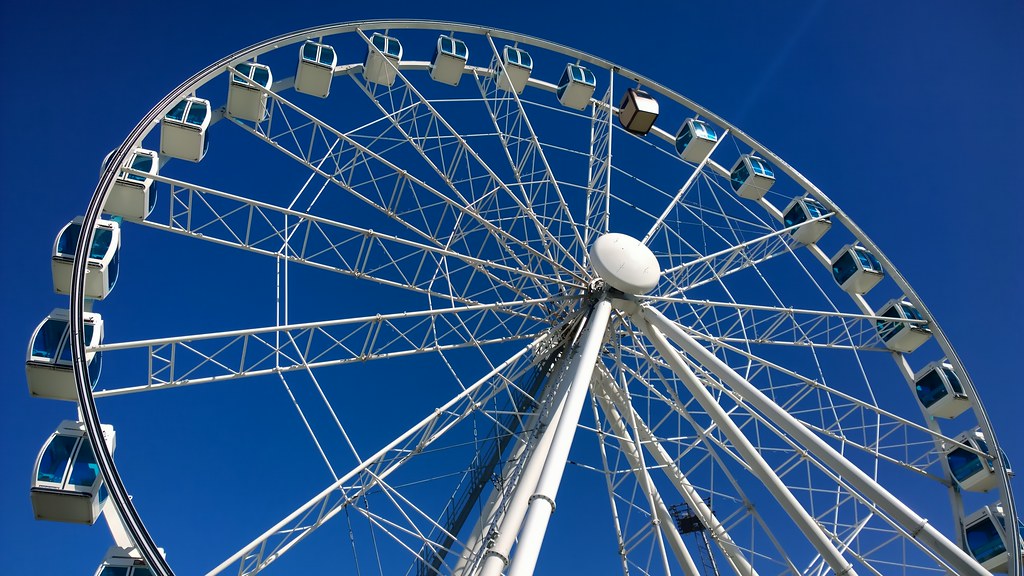 If you’re afraid of heights, don’t worry. It’s not a particularly tall wheel. It only reaches about 40 metres up.

Some people don’t enjoy the ride, while others consider it the highlight of their trip. If the sky is clear, it’s the best way to see more of the city. If it’s cloudy or rainy, you may just want to skip this attraction and move on to something else.

PRO TIP: Want to save money on your SkyWheel Helsinki admission? Keep more Euros in your pocket by picking up a Helsinki City Card for free (or discounted) admission many of the city’s major sights, museums, and restaurants along with free use of public transportation!

Climb the stairs in front of Helsinki Cathedral

After getting down from the SkyWheel, travel inland to where you’ll find several government buildings and a few religious buildings.

When trying to travel around Helsinki in one day, you should visit at least one of the historic cathedrals. The most prominent is the Helsinki Cathedral.

The Cathedral has a clean, white façade with blue-green domes topped with golden crosses. It’s an elegant-looking cathedral built in the 19th-century. 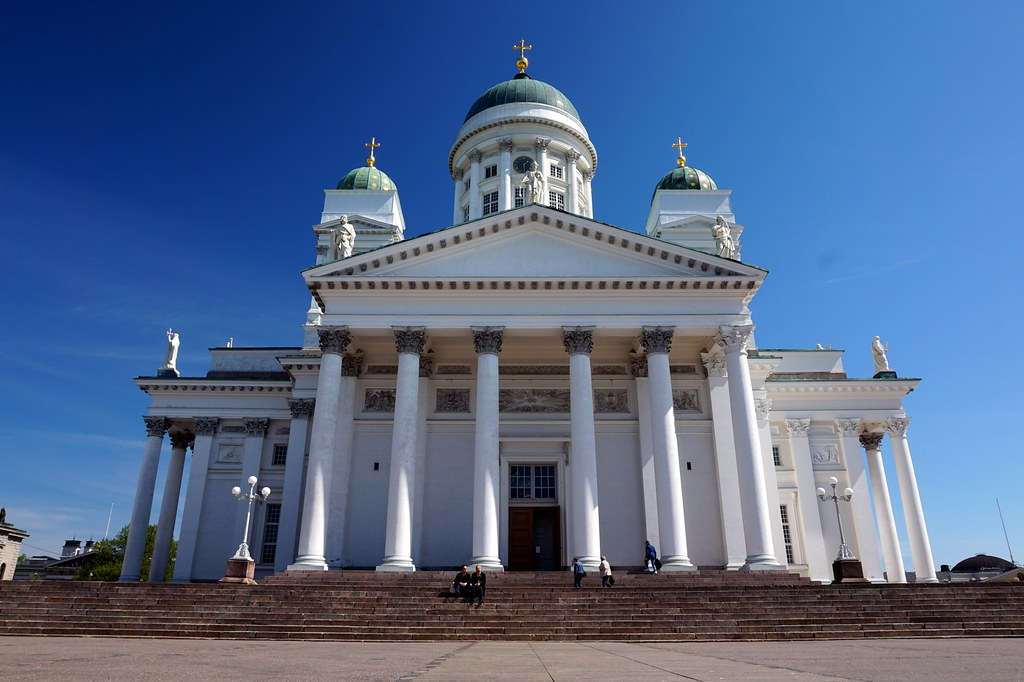 As with many of the religious structures in Helsinki, it resembles the architecture found in St. Petersburg (in fact, people used to call Helsinki little St. Petersburg).

When you get to the cathedral, climb the flight of stairs and turn around to look out over part of the city. You’ll also see your next destination from the top of the steps.

You should also take a moment to check out the cathedral’s interior. The simple elegance is unique if you’re used to visiting lavish churches full of golden décor and paintings.

PRO TIP: Want to learn more about the sites of central Helsinki? Join a professional guide as they fill you in on all the details on the Central Helsinki Tour!

Admire the architecture of Senate Square

From the cathedral, you’ll be able to see Senate Square. It’s directly in front of the cathedral and surrounded by other interesting architecture. Besides Helsinki Cathedral, the square provides access to the Government Palace, Sederholm House, and the main building of the University of Helsinki. 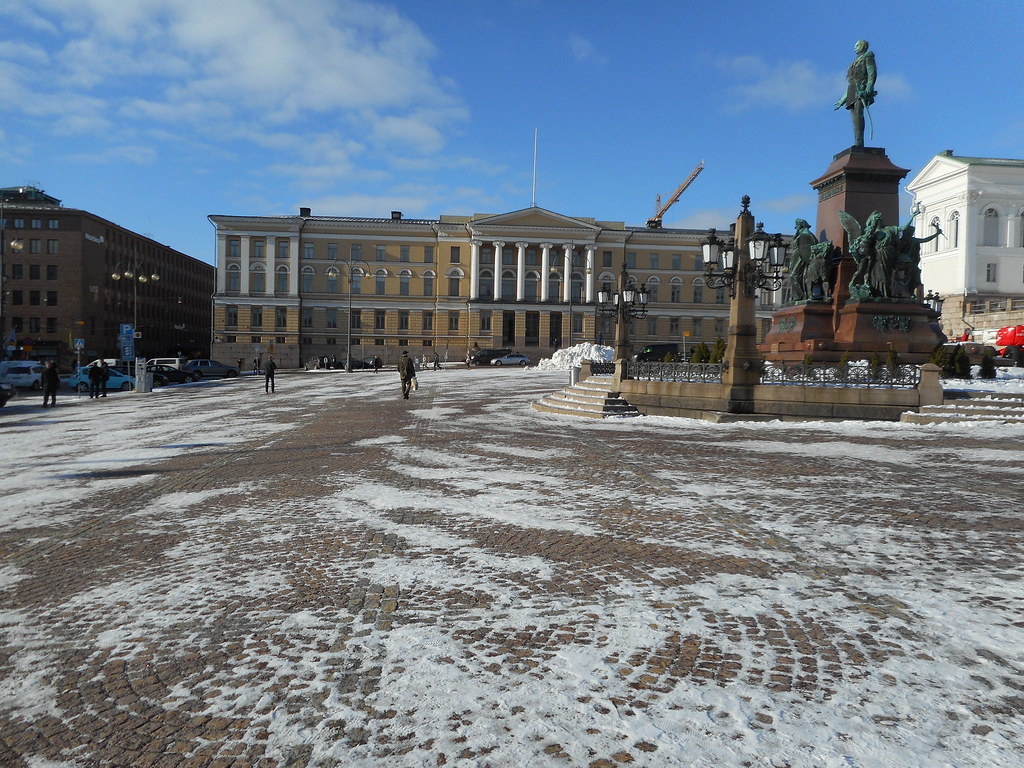 In the centre of the square is a statue of Emperor Alexander II. Other than the statue and the surrounding architecture, there isn’t much to do at the square, except, of course, get more food and drinks.

This is one of the busiest spots in the city and a great place to grab lunch or enjoy a cup of coffee. The area includes several cafes and restaurants.

Eat ice cream along the Esplanadi

The Esplanadi is the main boulevard that cuts through the city. It also takes you from Senate Square to your next destination. 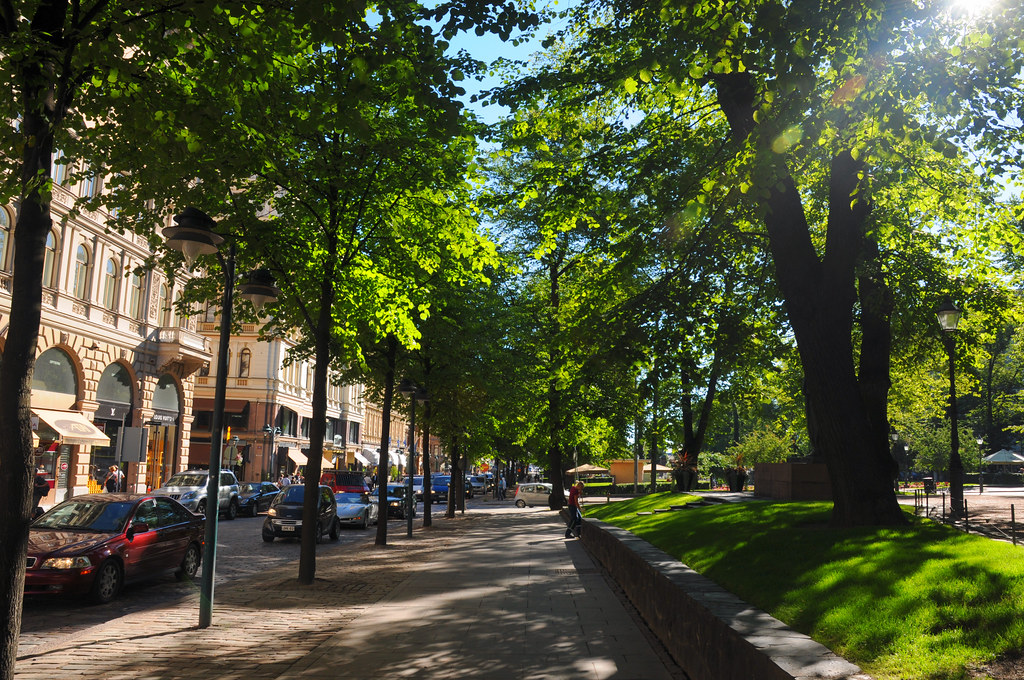 The boulevard provides another chance to grab a bite or another cup of coffee. If you’ve had enough caffeine, cool down instead with some ice cream. Stroll down the street with your cone as you go window shopping and enjoy some excellent people watching.

You’ll eventually reach Esplanadi Park. The scenery is fine, but the main reason to visit the park is to rest your legs. Sit on one of the benches while you finish your ice cream and enjoy the surrounding landscape.

PRO TIP: Want to make the most out of your morning? Learn about the major tourist sites of Helsinki with a professional English-speaking guide on the Helsinki Guided Sightseeing Tour!

After finishing your mid-day treat, it’s time to go to church. Travel west and north through Kamppi and into the Leppasuo neighbourhood. 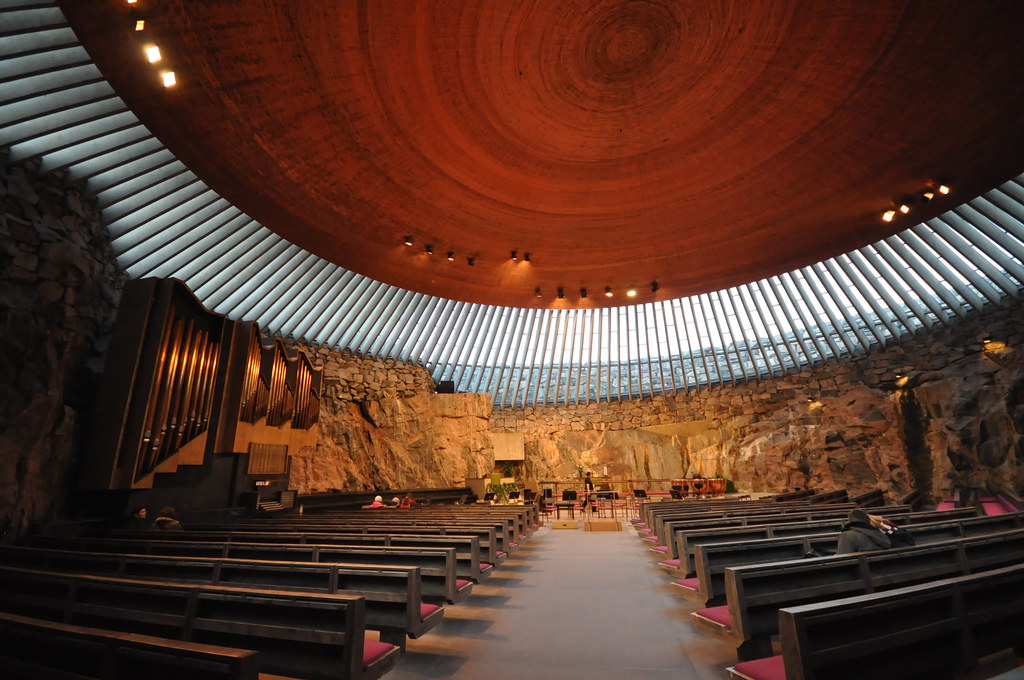 In the centre of this district, you’ll come across Temppeliaukio Church.

Temppeliaukio Church is another interesting destination in a city full of surprises. The church is often called the rock church, as it’s built into the side of a rock.

The front of the church looks like a bunker while the interior resembles a modern church. The main hall is covered with a dome and supported by the rock walls.

The interesting location offers amazing acoustics. The church takes advantage of the sound and holds live concerts at various times throughout the year.

PRO TIP: Don’t want to figure out the logistics of getting around the city? Join in on the Helsinki Half-Day City Tour and have a professional guide show you around while giving you a little local insight into the Finnish capital!

Walk under the floating organ pipes of the Sibelius Monument

From the church, it’s a short walk north to the Sibelius Monument, allowing you to finally leave the central districts and see some of the outer areas of Helsinki. 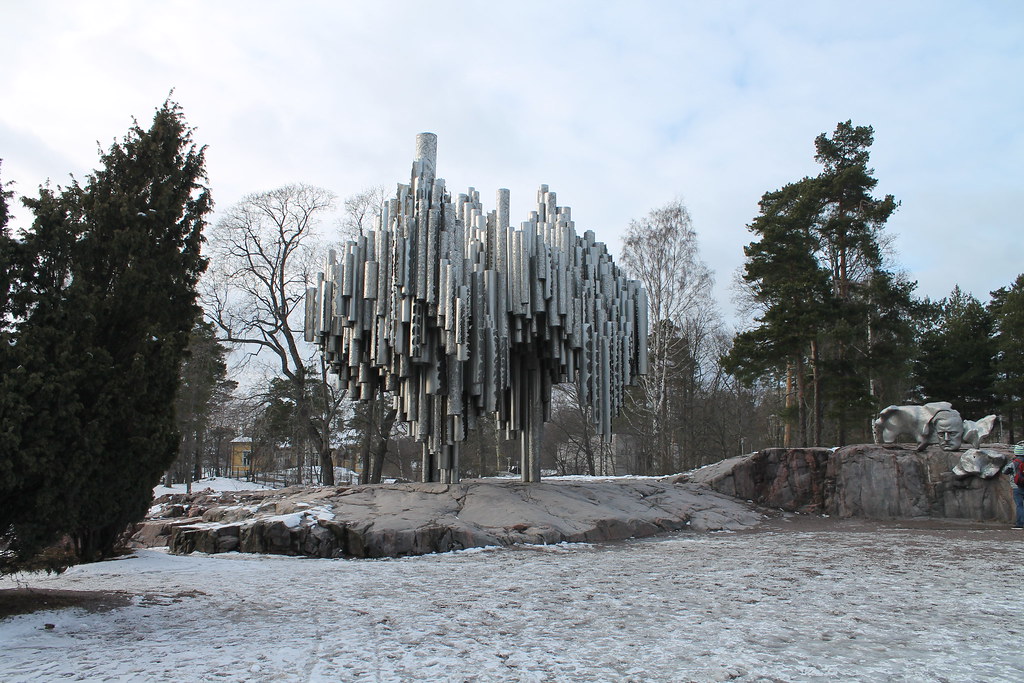 The monument was built as a dedication to Jean Sibelius – a famous Finnish composer. The design features a series of organ pipes suspended above the ground and a sculpture of the composer’s face.

The designer of the monument won a competition to build the sculptures. After installing the organ pipes, locals complained about the design, feeling that it didn’t represent Sibelius. In response, the designer added the face of the composer.

You can walk around and under the hanging pipes, but make sure that you explore the surrounding park. It features beautiful local plant life and looks especially magical when you visit in the early spring as the flowers start to bloom.

PRO TIP: Want to get around the city with ease? Pick up a Helsinki By Bus and Boat 24-Hour Combo Ticket for unlimited use of a sightseeing bus and boat including 18 stops around Helsinki with commentary in 11 different languages!

When you’re done appreciating the Sibelius Monument, it’s time to round out your Helsinki itinerary with drinks or a late-night snack.

Helsinki has several streets that come alive at night as the younger crowds start heading to the bars and clubs.

The busiest and most entertaining of these streets is Mannerheimintie. It’s one of the main avenues in Helsinki and home to many of the top bars. Some locals call it Mann’s street. Besides bars, it also has several great restaurants.

As Mann’s street is a major street, it also has many bus stops, making it easy to get back to your hotel afterward.

After a few drinks or a snack, you can continue exploring the Helsinki night scene or call it a night. If you want to keep partying, head east to the Kallio neighbourhood where the dancing tends to continue much later into the night.

PRO TIP: Got an extra day in Helsinki? Escape the city to the beautiful riverside town of Porvoo on the Porvoo Town Tour from Helsinki!

Where to stay: The best hotels for 24 hours in Helsinki

Even though the city’s got a smaller town feel compared to some other European capitals, choosing where to stay in Helsinki isn’t always the easiest task. The Finnish capital spreads over a huge area—over 700 square kilometres in the city alone!—so you’ll want to pay attention to which area you settle for if you want to make the most out of your Helsinki layover.

The best areas for most travellers are located in the centre of the city including Kamppi, Kluuvi, and tongue-twisting Kaartinkaupunki. Here are a few of the best hotels to start your search…