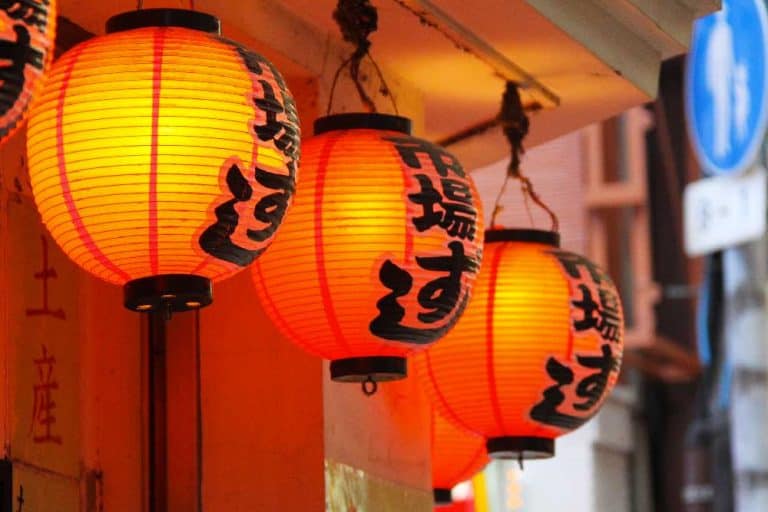 Any traveller with an affinity towards Japan dreams of wallowing among the blissful cultural treasures of Kyoto. Fewer are aware that its neighbour Osaka sports quite a few of its own!

Among the most compelling things to do in Osaka is to take break from the big city buzz to scope out some of the beautiful temples & shrines of Osaka. While they might not match the grandeur you’d find in nearby Kyoto or Nara, they’re worth getting know. They offer a fascinating glimpse at the ancient history of this modern Japanese city.

Want to discover Osaka’s religious past? Here are a few of the best temples & shrines in Osaka.

Steps away from the neon-blasted action of the entertainment district of Dotonbori, Hozen-ji Temple is a island of calm in the heart of city. Hozen-ji dates back to 1637. It’s famous among Osakans for the moss-covered Mizukakefudo. This statue depicts one of the five Wisdom Kings of Buddhism, Fudo Myoo. 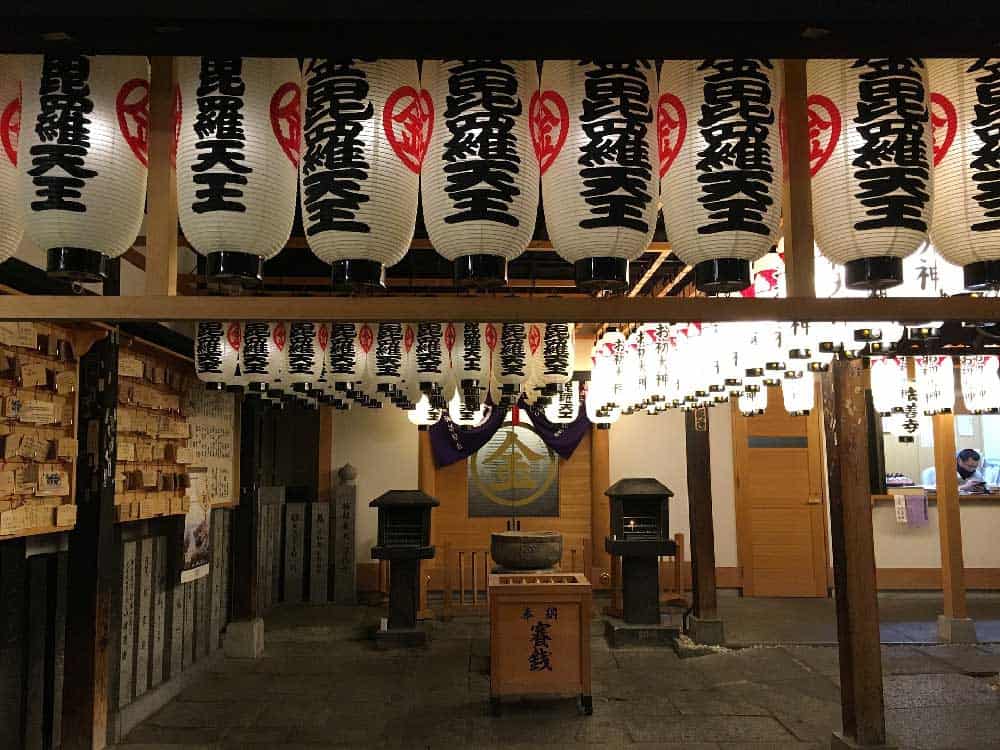 Adding to the intrigue is that the statue was one of the only things in the area to survive the WWII bombings of Osaka. It’s no wonder that devout Buddhists adore Mizukakefudo. They worship the statue by gently splashing water on it under the faint glow of paper lanterns.

While visiting Hozen-ji Temple, don’t miss out on Hozen-ji Yokocho. This narrow alleyway forms the approach to the temple. It’s lined with dozens of restaurants & bars harkening back to the look & feel of old Osaka. In them, you’ll find some of the best food in Osaka.

How to get to Hozen-ji Temple

From Namba Station, take Exit 14 on Mido-suji. Turn at the side street straight ahead and walk straight until it crooks into an alleyway. You’ll find the temple on the straightaway around the first bend.

Founded in 593, Shitenno-ji Temple is one of the oldest temples in Japan. It’s an absolute must-see while visiting Osaka. Much has changed at this temple complex over its more than 1,400 years of history. It’s experienced several reconstructions. The most recent in was in the post-WWII period. The renovations were painstakingly undertaken to recreate the spirit of the original. 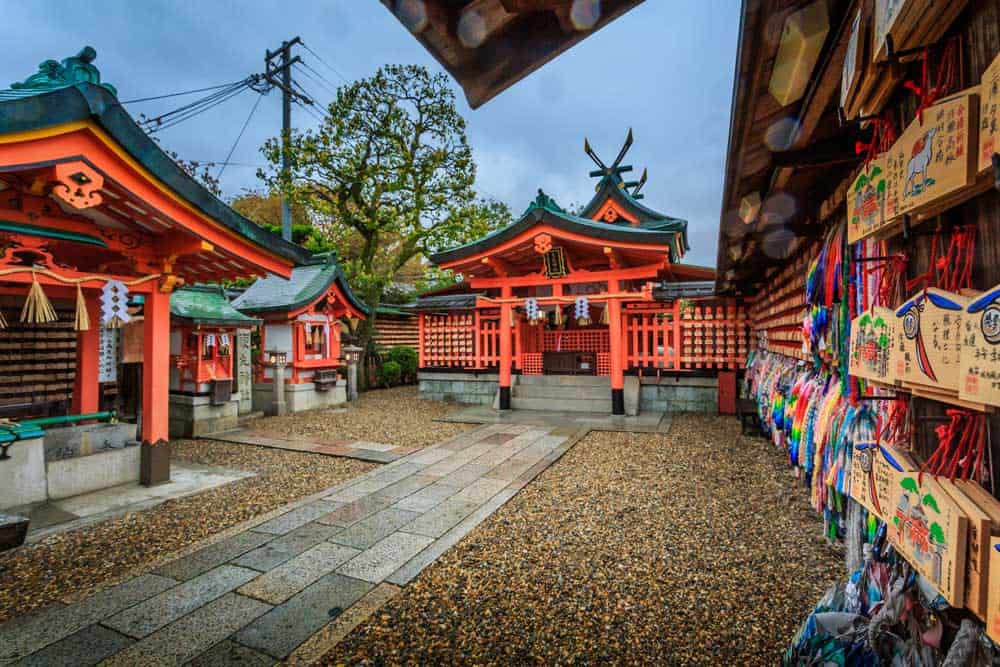 There are plenty of highlights at Shitenno-ji. Among them are its 13th-century stone Ishii-no-torii gate, five-storey pagoda,and treasure hall. You’ll also see the Main Hall (Kondo) where Prince Shotoku, the temple’s founder, is enshrined. Perhaps best of all, though, is the Gokuraku-jodo Garden. This beautiful Japanese garden was inspired by the west. It features ponds, pathways, and one of the best viewing spots for cherry blossoms in Osaka.

How to get to Shitenno-ji Temple

By Osaka public transportation, the easiest way to get to the temple is by metro. The closest station to Shitenno-ji is Shitennoji-mae-Yuhigaoka Station on the Tanimachi Line. From Exit 4 walk south along the smaller street running parallel to Tanimachi-suji. The temple’s stone torii gate will be about four blocks ahead on your right.

Burrowed down on a site with 12th-century roots, Isshinji Temple is one of the most unique you’ll encounter on your trip to Japan. The temple greets your with a modern sculpture, fashioned from steel bars and sheets of metal. Its stark contrast with other places of worship can be a bit confusing for visitors at first. 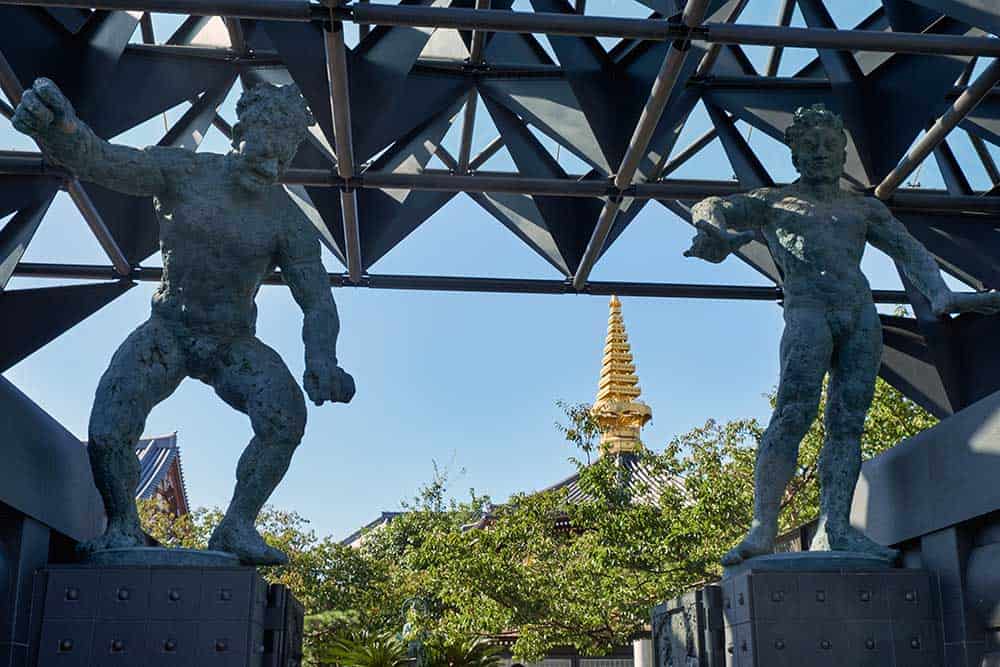 Unlike other temples in Osaka, what makes Isshinji Temple so compelling isn’t its outward beauty. It’s the uniqueness of the treasures inside. The temple features Okutsu Butsu. In this practice human bones are mixed with clay and sculpted into statues and relics. Within Isshinji Temple, you’ll encounter 15 Okutsu Butsu statues. They collectively contain the remains of over a million people.

How to get to Isshinji Temple

Grab the Osaka subway to Tennoji Station, exiting into Tennoji Park. Walk through the middle of the park, passing by the Osaka City Museum of Fine Arts. The temple entrance sits on the northern edge of the park. 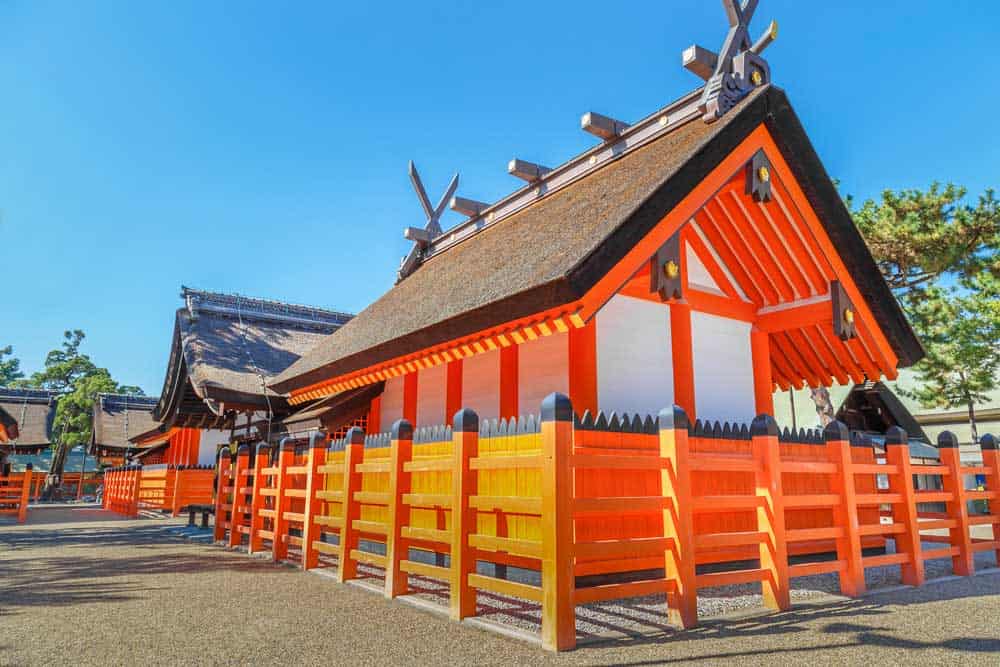 The shrine uses a distinctive architectural style called sumiyoshi-zukuri. The style features straight roofs, as opposed to curved one. The roofs are punctuated by forks (chigi) at each gable and have five horizontal supports (katsuogi). Throughout the shrine complex, you’ll catch sumiyoshi-zukuri in action. The style is most pronounced at its four main halls (honden).

How to get to Sumiyoshi-taisha Shrine

Sumiyoshi-taisha sits a little outside the centre of Osaka. It’s about 5 kilometres south of Shinsekai. It’s a little tough to throw into your plans if you’ve only got one day in Osaka. The easiest way to get to Sumiyoshi-taisha is on the Nankai Main Line from Namba Station to Sumiyoshitaisha Station. The ride costs ¥210 and the journey is just ten minutes.

Alternatively, if you’re already in Tennoji, take the Hankai Tramway from Tennoji Station. Exit at either Sumiyoshitoriimae Station or Sumiyoshi Station. The journey takes 15 minutes and costs ¥210.

Over 10 centuries of history stand behind Osaka Tenmangu Shrine. It’s one the most important Shinto shrines in Japan. Like many shrines in Osaka, Osaka Tenmangu Shrine has witnessed a turbulent past. It’s been destroyed and rebuilt several times throughout its lifetime. The main gate and honden (main hall) at the shrine hail from 1845. They’ve been re-built to original specifications.

Osaka Tenmangu Shrine is dedicated to Sugawara Michizane, the Shinto deity of arts & education. Worshippers visit the shrine to seek academic enlightenment. They can push through the shrine’s path and offer their blessings at the altar. 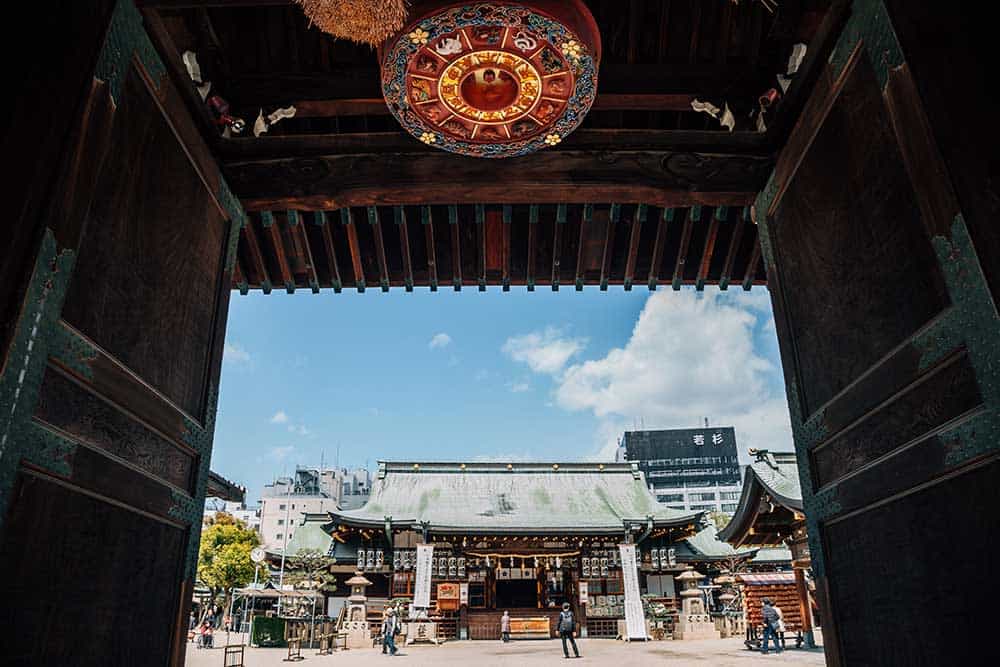 The shrine’s site is also home to the Tenjin Matsuri. It’s one of the top three festivals in Japan alongside Gion Matsuri in Kyoto and Kanda Matsuri in Tokyo. The festival is a lively scene. The shrine’s deity is paraded through the city’s streets and along the Okawa River. The parade is followed by a festive fireworks show on the riverbank.

While visiting Osaka Tenmangu Shrine, be sure to check out Tenjinbashi-suji Shopping Street. This two-kilometre covered shopping arcade is the longest in Osaka–and one of the longest in Japan.

How to get to Osaka Tenmangu Shrine

The closest subway station to the shrine is Minami-Morimachi Station (Tanimachi & Sakaisuji Lines). The adjacent Osakatemmangu Station (JR Tozai Line) is also close. From Exit 3 of the station, walk south along the street directly to the right of the exit. Follow the street for two blocks and turn left. The shrine’s main gate will be to your left.

Tsuyunoten Shrine rests in a quieter corner of Umeda. And while the shrine might lack the pomp to draw travellers from across the city, it more than makes up for its stature with its flair for the dramatics. 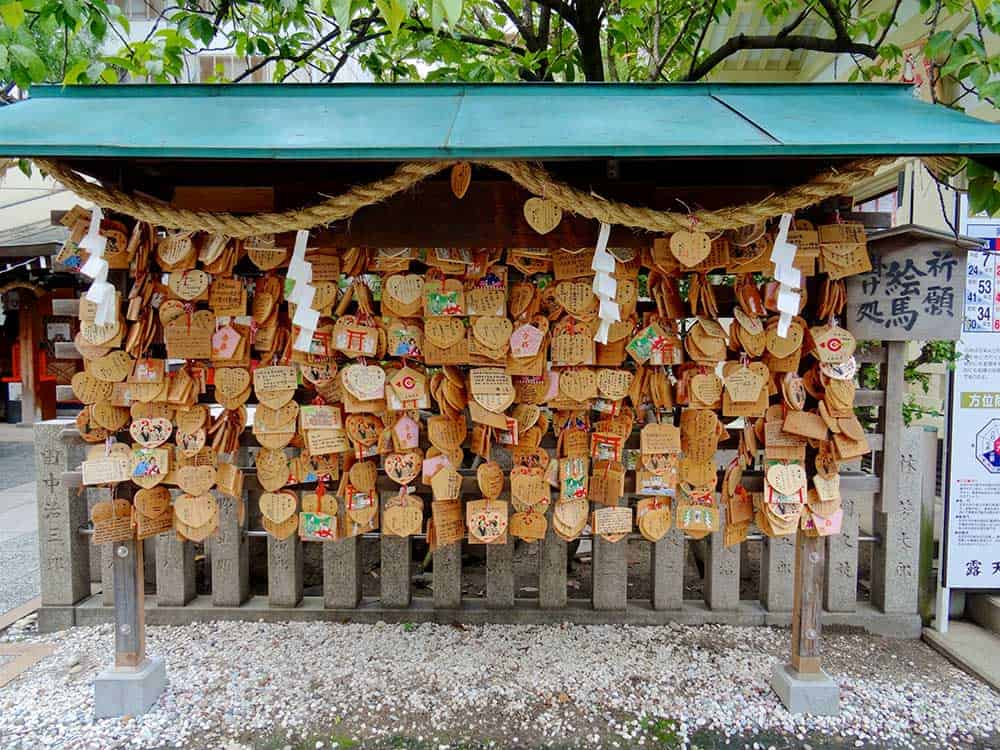 Also called Ohatsu Tenjin, Tsuyunoten Shrine memorializes an early-16th century double suicide. The couple—a son of a rich merchant and a geisha—found forbidden love that saw no future in the material world. The shrine’s story was so popular that it inspired a popular bunraku (puppet theatre) play, The Love Suicides of Sonezaki.

Today, Tsuyunoten Shrine is a hotspot for young Osakan couples. They visit to seek well-wishes for success in their own relationships.

How to get to Tsuyunoten Shrine

From Higashi-Umeda Station, exit to Mido-suji and walk south. One street before the Keihan National Highway, turn left. In about half a block, walk through the small torii gate to your left to find the shrine.

Where to stay in Osaka for temple- and shrine-hoppers

Osaka’s best temples and shrines are spread throughout the city. No single district stands out as more central than all others. As per out usual recommendations on where to stay in Osaka, the best districts for most travellers are located in Minami and Kita (Umeda). Good choices include Namba, Honmachi, and Dotonbori. Here are a couple ideas for the best hotels in Osaka…